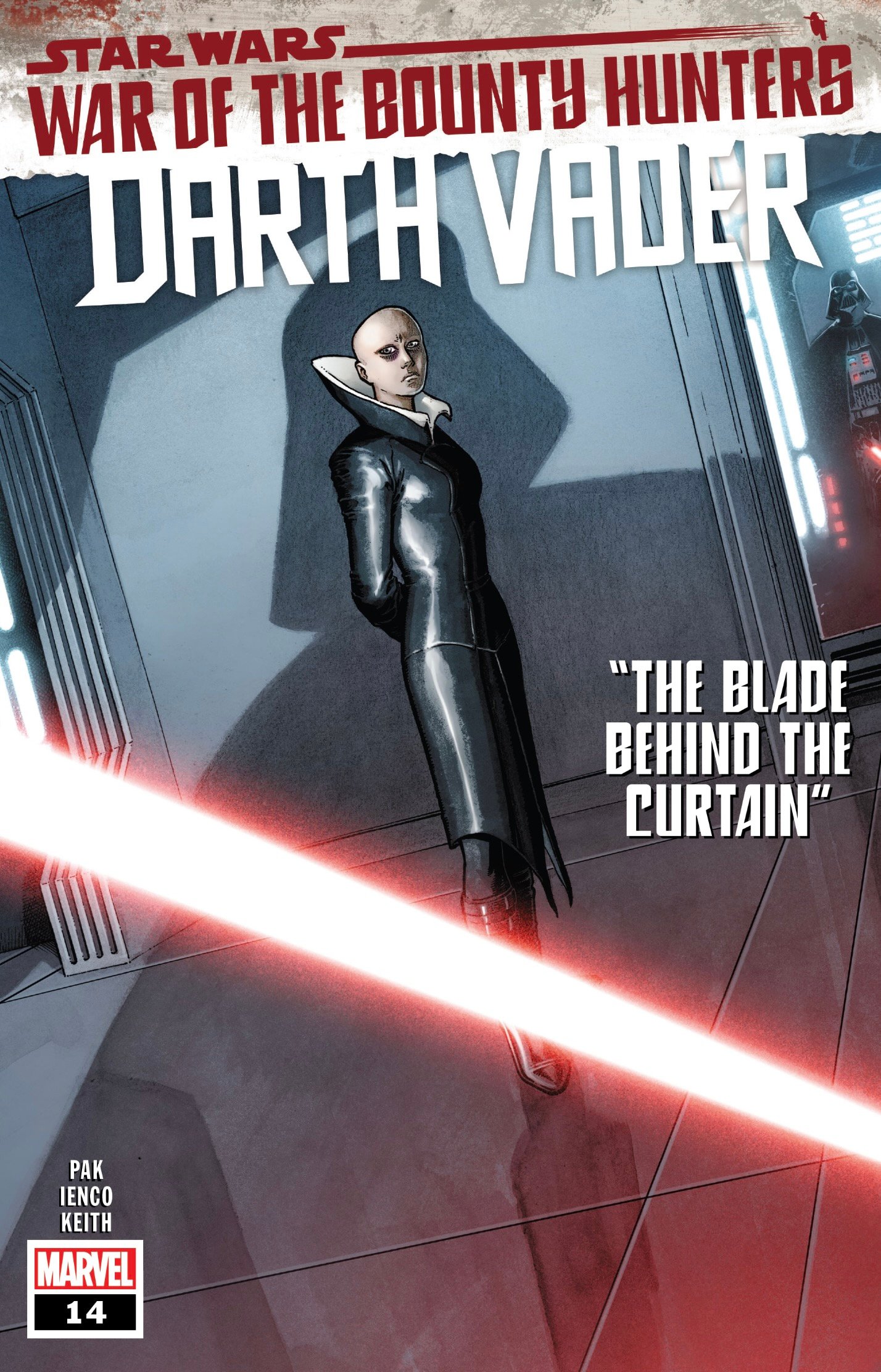 Writer Greg Pak shifts perspectives in the latest issue of Darth Vader. If you’re like me, the first time you got a glimpse of Sly Moore you said there’s got to be a story there. Well, Pak thought so too and this issue brings Sly Moore into the action and reveals a much larger role for her than advisor to the Emperor. SPOILERS AHEAD….

Even if Palpatine sets you up to fail you are still forced to bear the consequences alone. This issue opens with Vader fully restored and Palpatine musing over Moore’s failure to defeat his apprentice. Demonstrating there is no loyalty in the Emperor’s inner circle, Moore is cast out as a sub-administrator, dealing with mundane duties rather than carrying out the Emperor’s will (and enjoying the respect that authority commands). I found myself feeling bad for Moore, who Palpatine seems to be toying with to see how far she’ll go to prove her worth. 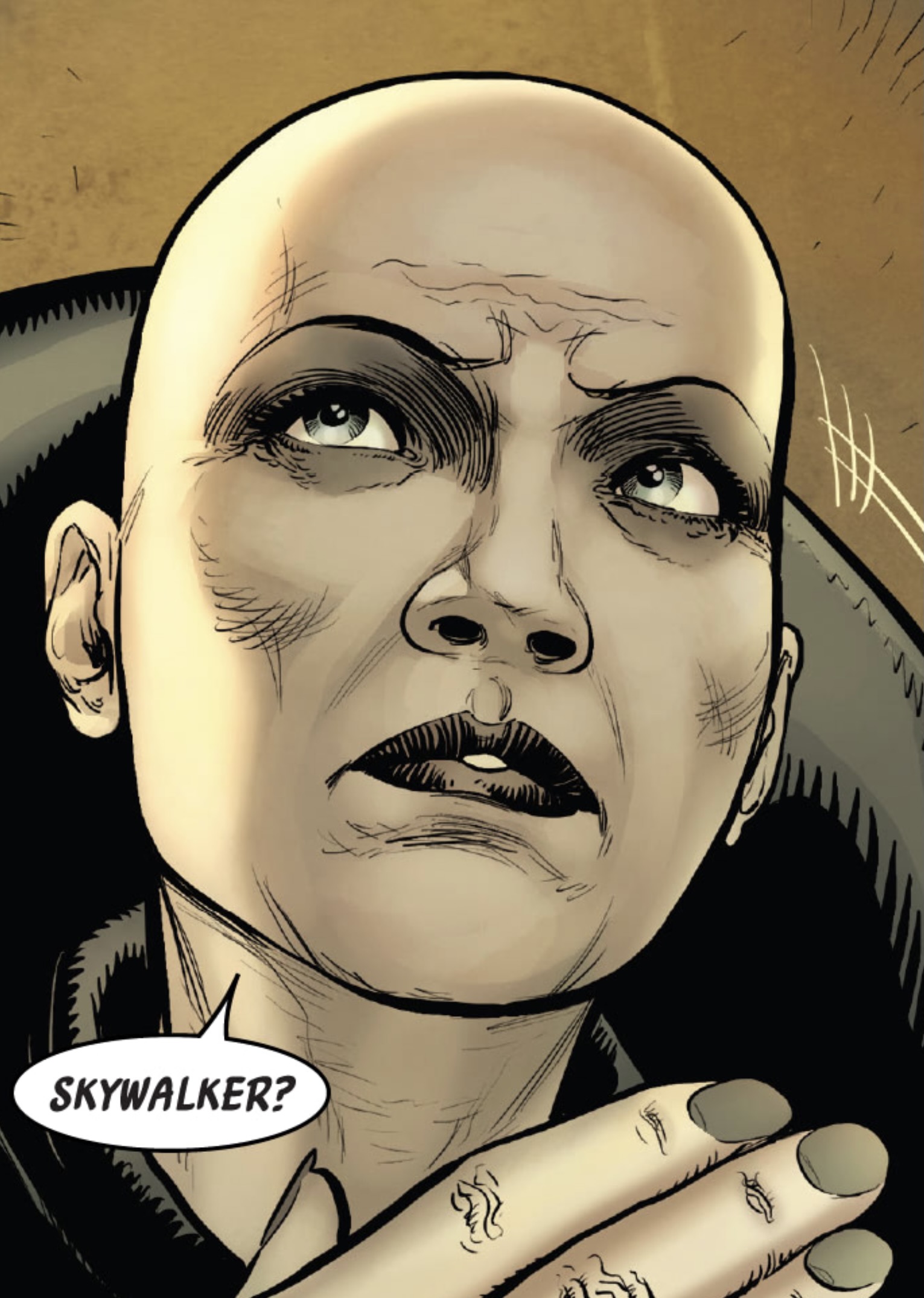 As Sly conducts a meeting about daily Imperial business, one update catches her interest. Han Solo’s frozen state continues to attract all the wrong eyes and now Sly learns of a connection she was unaware. The name Skywalker is familiar to her, as someone who lived through the Clone War and saw Palpatine’s grooming of Anakin firsthand. Sly realizes this may be an opportunity to exploit Vader and begins searching for weaknesses in his armor. When Grand Vizier discovers this, we learn Sly Moore has Force abilities, using them to command Vizier to forget he saw anything. 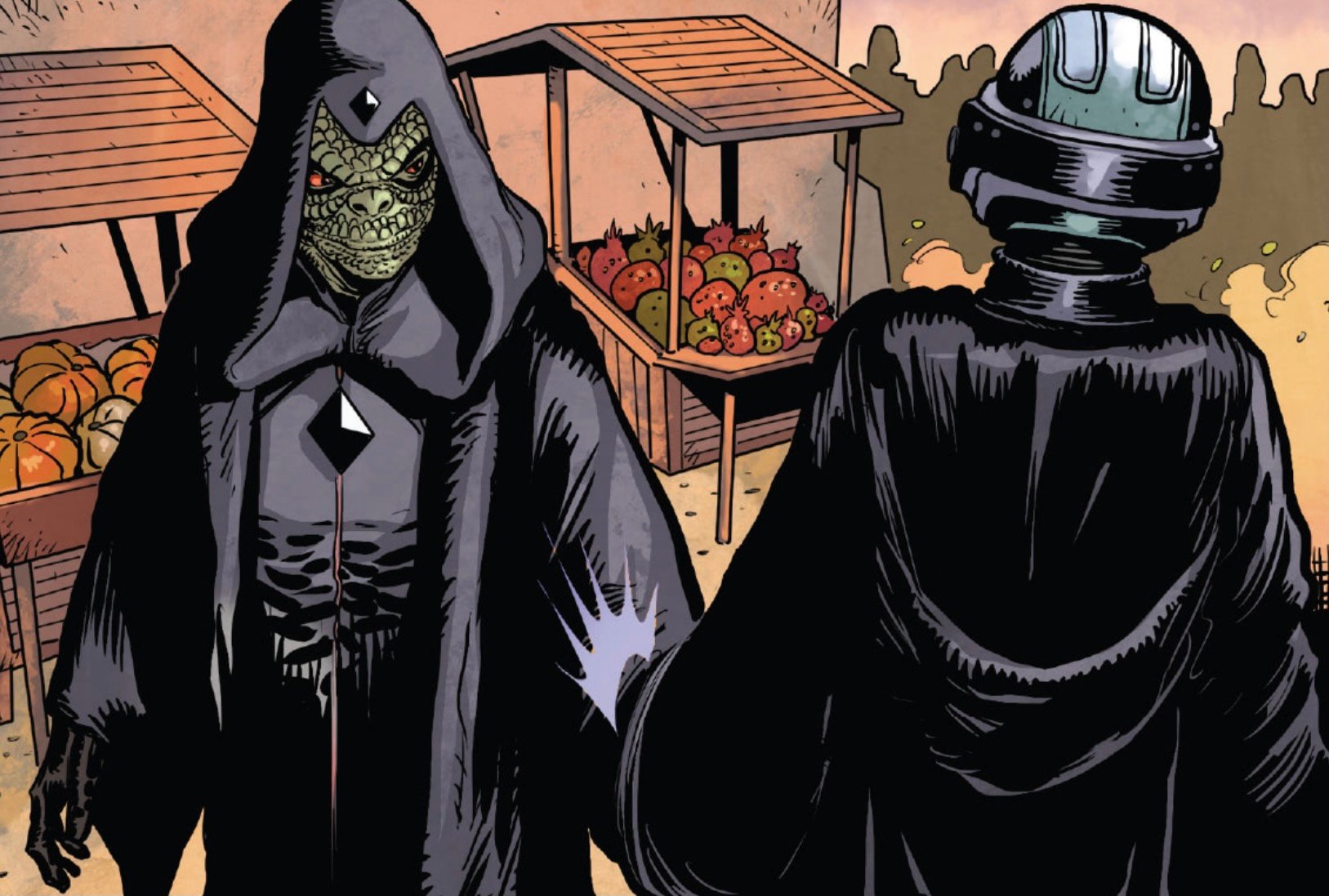 It becomes clear this serves as a backstory to the end of the previous issue, when a group of unknown hooded beings were revealed as the ones who hired IG-88 to go after Vader and gave the droid hunter the means to disable the Sith Lord’s cyborg components. This group might be related to the acolytes on Exegol but they are intent on overthrowing Palpatine and Vader. Their motives and intentions? Unknown, but Sly Moore is clearly the leader and when we catch back up to our first meeting with them, someone else drops in to say hello. 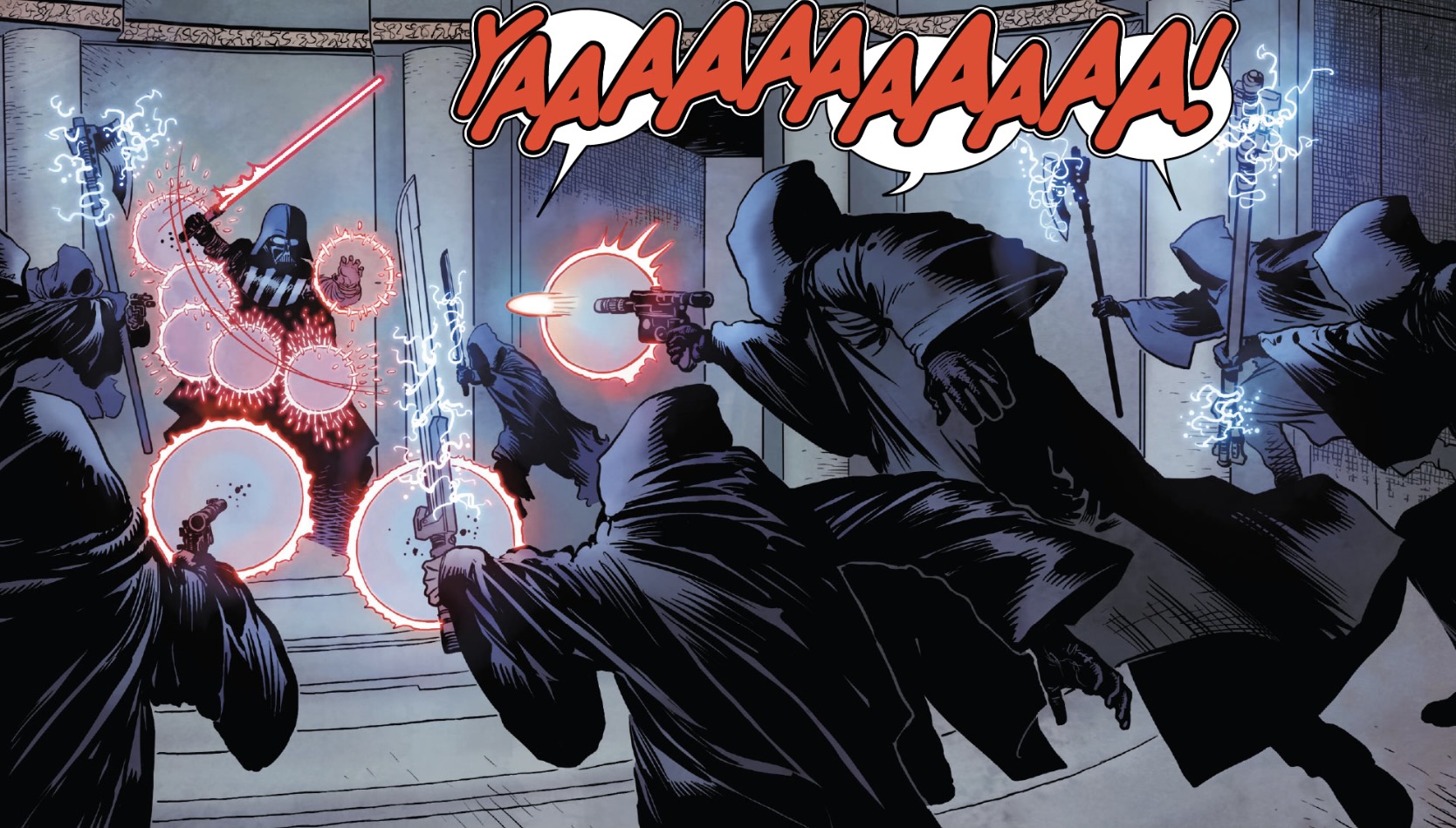 When Sly tries to use Vader’s weak cyborg components against him, Ochi (who is now something of a Vader lackey) laughs at the predictability. IG-88 is the only one who got the opportunity to use that advantage. Vader quickly dispatches the rest of Sly’s minions. This is where the writing quickly becomes uneven. Sly tries to manipulate Vader with the Force and it doesn’t go well. For some reason, Vader doesn’t kill her outright and decides to hear what she has to say. It seems very out of character for the Sith Lord who came in lightsabers blazing, killing indiscriminately. 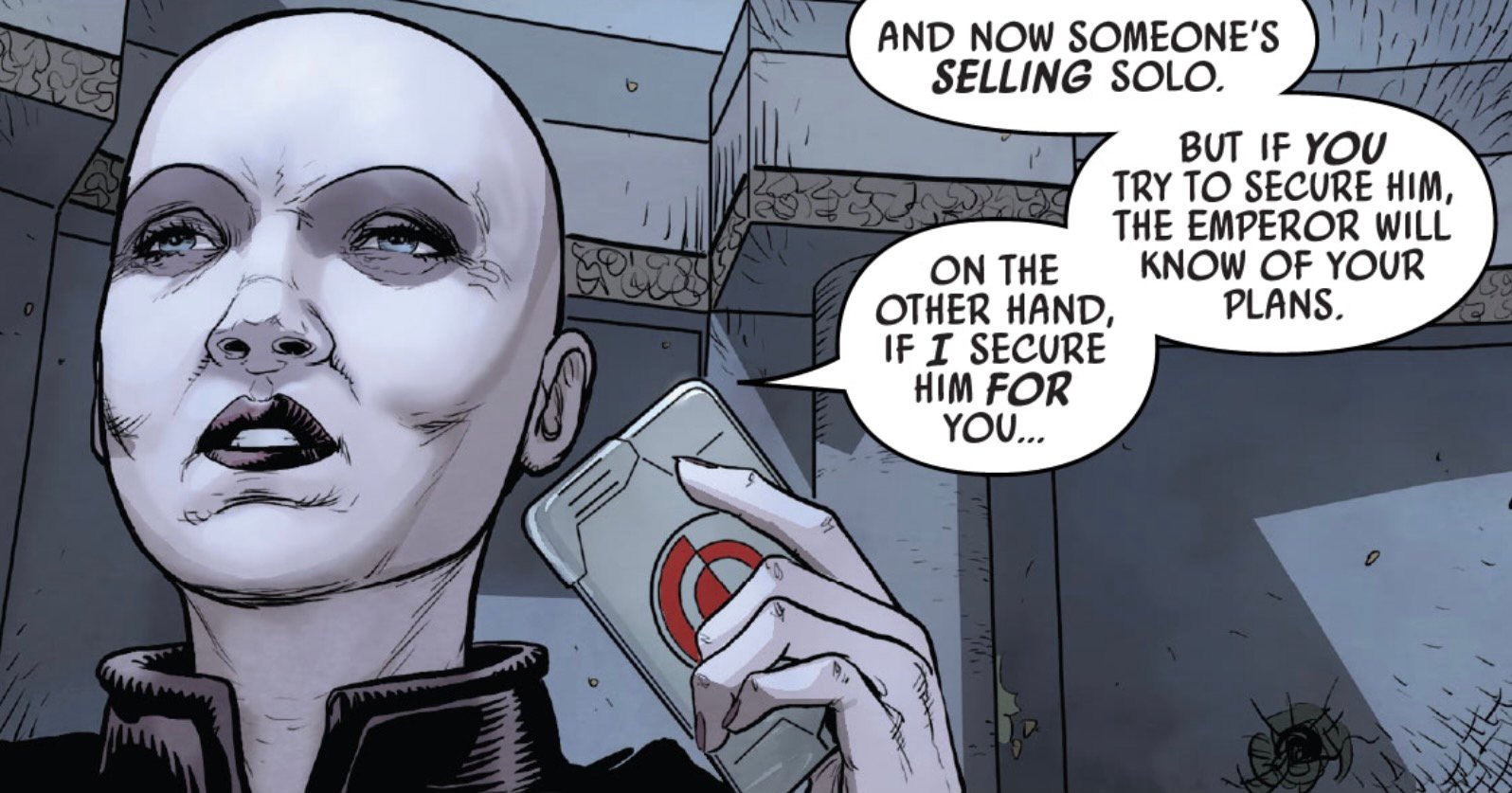 Sly lures Vader with the promise of Skywalker. Because Palpatine has Vader so closely under his thumb, the Sith Lord can’t risk looking for Skywalker to help him overthrow his master. Sly offers to form an “enemy of my enemy” alliance with Vader, attending the Crimson Dawn auction to bid on Skywalker. She sees Vader’s obsession with Luke and she’s not wrong. Vader goes along with the plan. 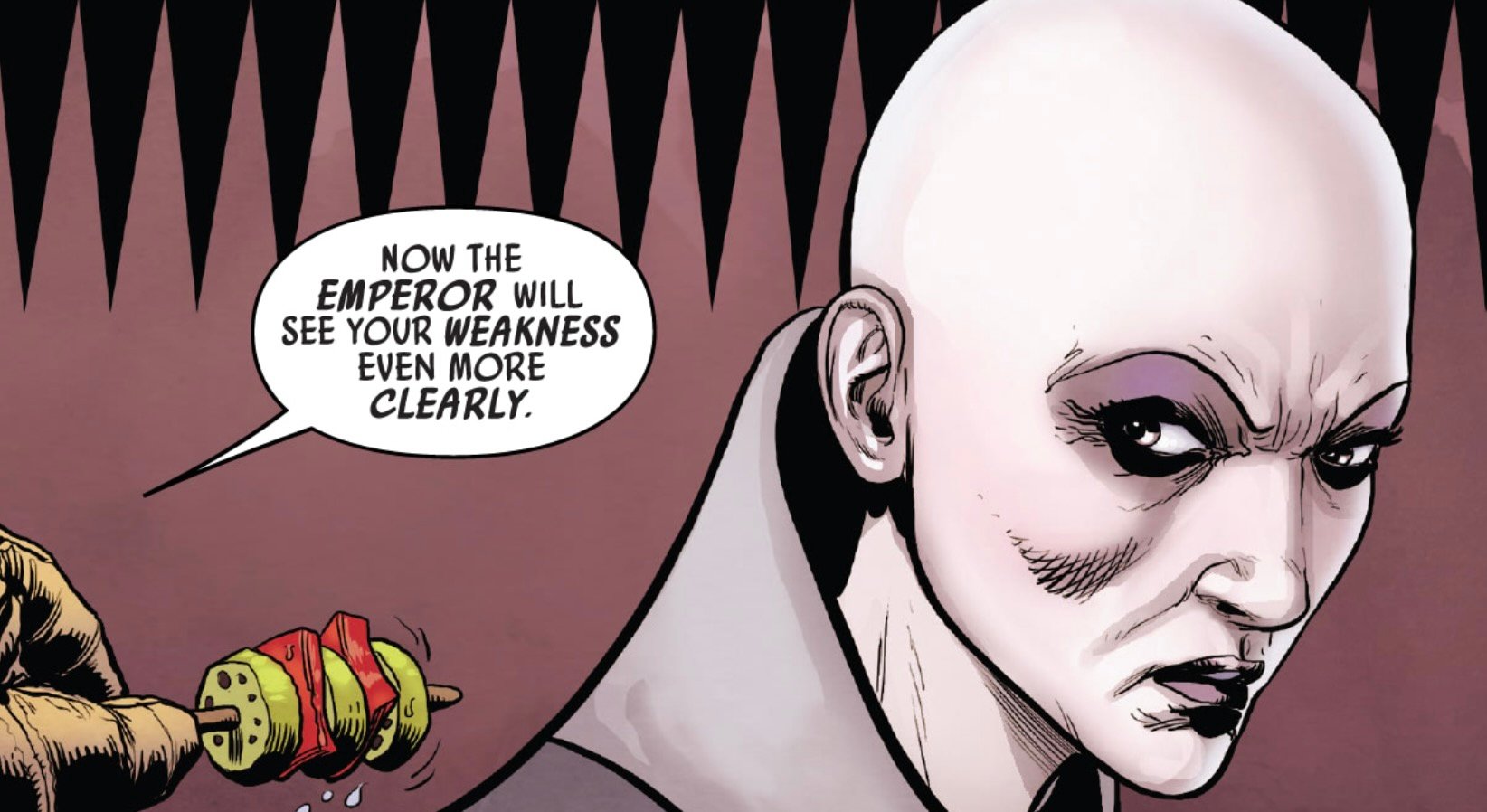 Assuming she’s doing Vader’s bidding, Sly ends up being one of the top bidders for Han. From the previous issue of Doctor Aphra, we know Jabba wins the auction by far and Sly is humiliated. She’s been used by Vader to expose her plot against the Sith and put her in the Emperor’s crosshairs. A very smug Ochi is all to eager to offer up on explanation. Sly has unwittingly done Vader’s bidding, by locating Solo and getting herself and her followers out of the way. 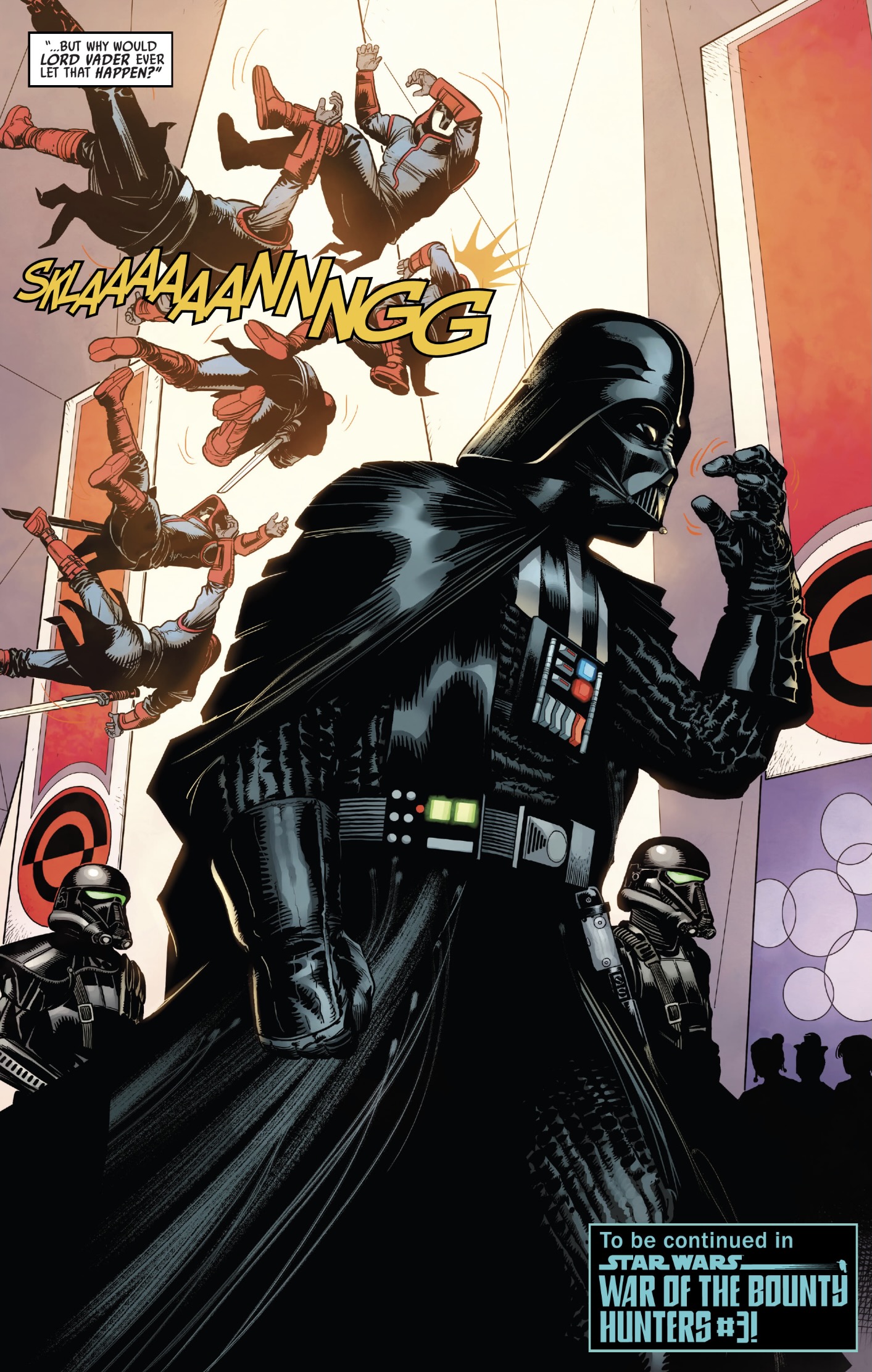 And Vader’s arrived just in time to bust up the party for everyone!

Well, this issue began with promise. I’m still intrigued by Sly Moore and what she’s up to but this new Vader/Ochi duo just seems silly to me. Writer Greg Pak has done some solid work in the past and I’m disappointed this series portrays Vader so flatly. This is one period of his life we knew very little about and so far all this series just continues to make him a Frankenstein Sith or explain plot holes from The Rise of Skywalker. I don’t mind exposition and explanation but the story itself doesn’t seem to be served by it. And jamming all these characters into War of the Bounty Hunters isn’t helping anyone. 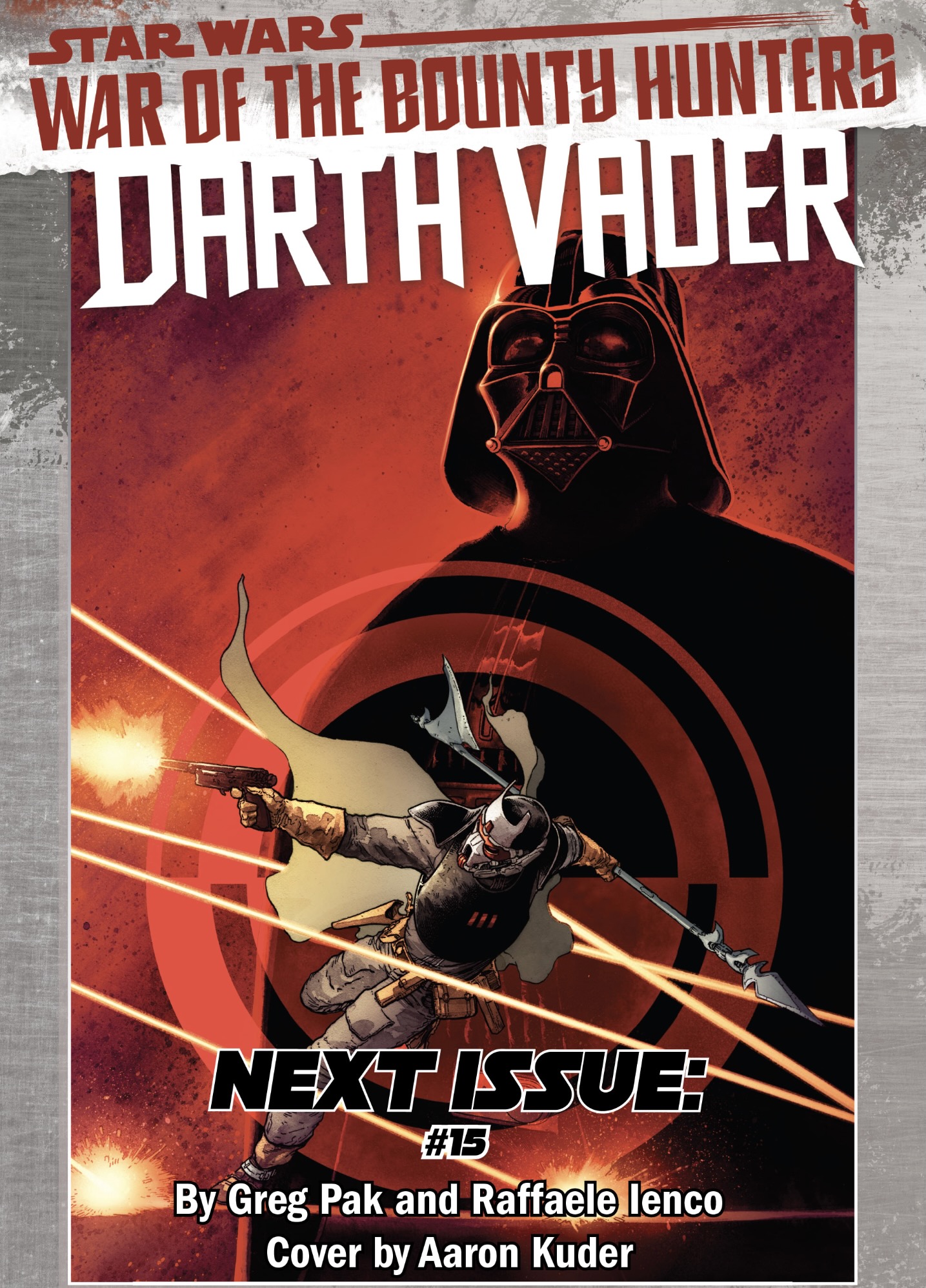