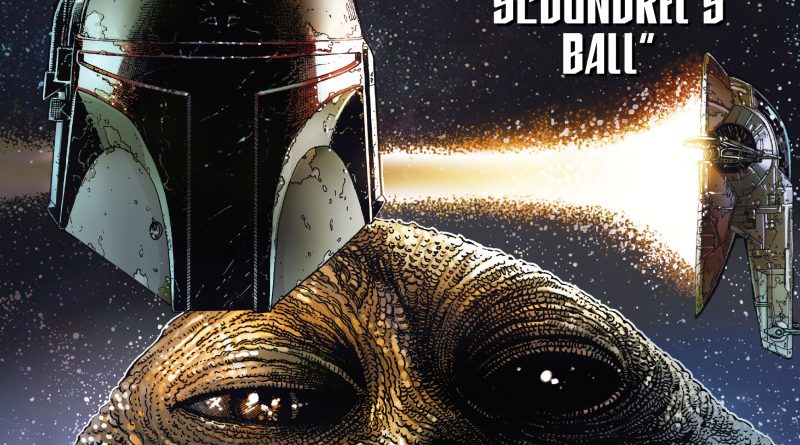 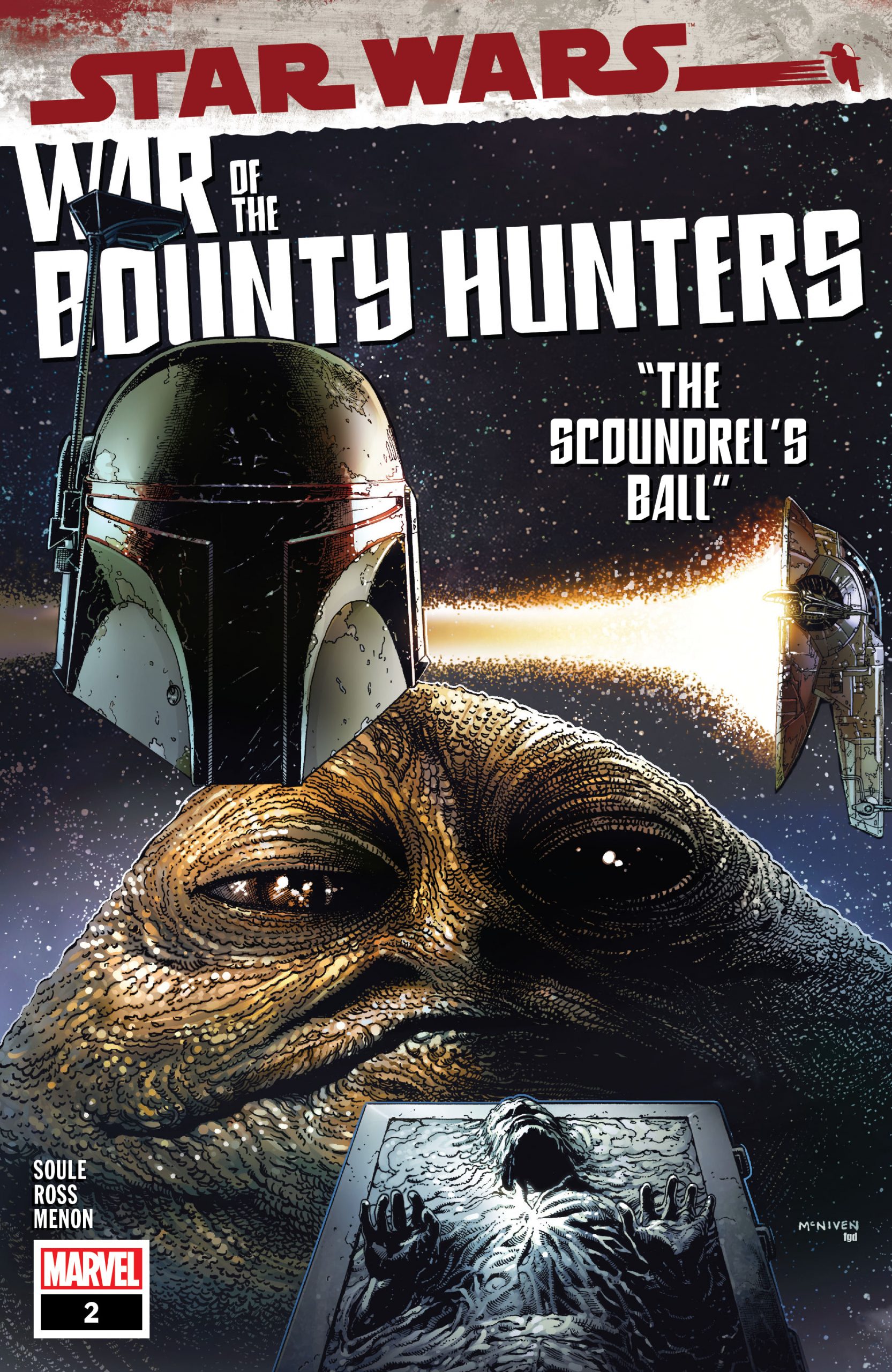 After last months big reveal and some stellar crossovers we’re finally back to the main event. All the pieces have been moved into position, it’s time for the big auction party.

Crimson Dawn leader Qi’ra has gathered the biggest criminal enterprises in the galaxy aboard her ship for the chance to win Han Solo in carbonite.

This issue hasn’t quite got the big punches of the first, but it has enough of its own twists to keep us wanting more.

Tensions are rising aboard the Crimson Dawn flagship among the party’s guests: some factions are distrustful of Crimson Dawn’s long absence, the Empire’s presence, and even among the Hutts themselves.

Bobas there to get his prize back, Solo is his. Firstly though, he’s got to get a disguise and an invitation. Luckily, some latecomers provide that opportunity, not before Boba Fett is interrupted by the Trandoshan Bossk though.

It’s nice to know Jabba has reevaluated the bounty on Boba after finding out he probably didn’t sell Solo to Crimson Dawn and was robbed. Jabba makes a comment during the party that whatever happened, he’s just excited to see Boba try get his bounty back and to watch the fireworks. Jabba really does live for the drama, but what do we expect from someone that uses Rancors and Sarlaccs as executioners.

Boba gets the best of Bossk with a stray missile to his ship, which explodes and blows Bossk’s legs off! 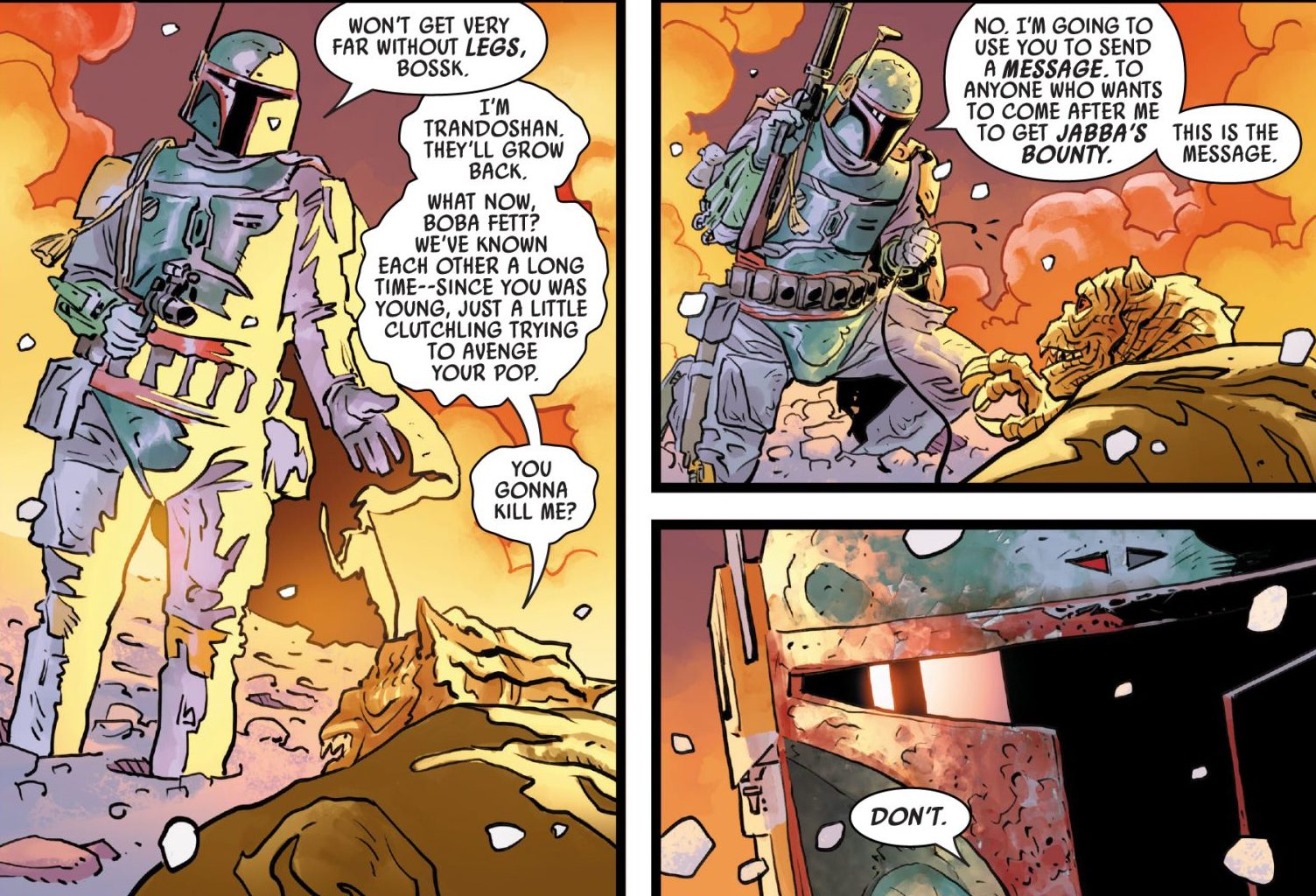 Boba is the king of cool lines.

We cut to Doctor Aphra and Sana Starros hiding their identities and keeping a low profile at the party. No one has noticed them until a hooded figure informs Aphra he knows who she is. Despite not seeing his face, the Doctor can place the voice. 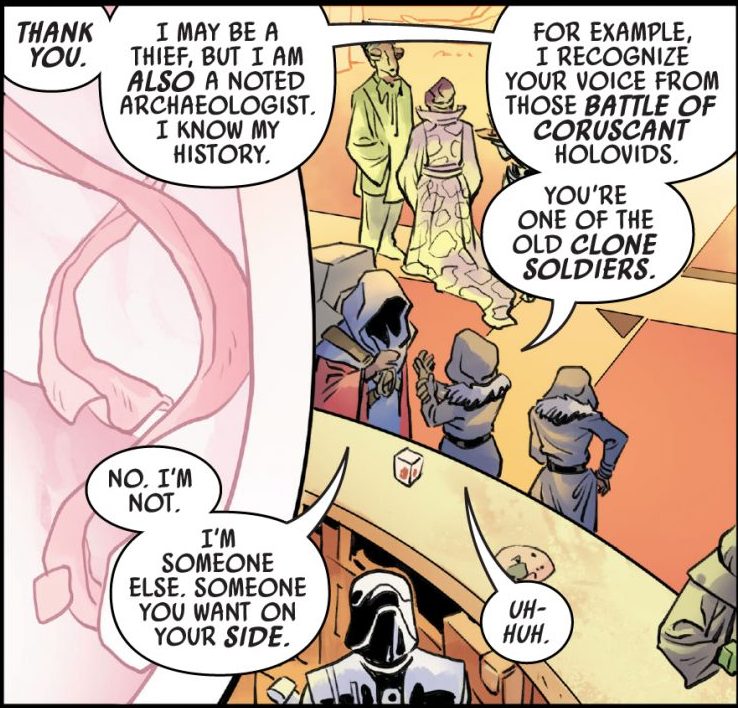 Aphra isn’t quite correct, it must not be common knowledge that Boba Fett is an unaltered clone. It would be interesting to see if this mistaken identity happens a lot, maybe it’s a reason Boba is so keen to stay helmeted all the time.

Knowing that everybody in that room wants either Aphra or Sana dead, Fett is able to blackmail them into his plot. They are to cause a distraction for the guards on his signal. As Boba disappears into the crowd, the auction begins, with Qi’ra leading the proceedings.

It’s a harsh intro from a woman who has her own history and bond with Han Solo, but what she says has been true about him, even if it isn’t the person he is at this moment in time.

Qi’ra starts off the auction at one hundred thousand credits which quickly escalates as various criminal gangs bid, including the Empire. It comes down to both Bakku and Jabba the Hutt in the final stretch. Jabba gets the final bid in though. 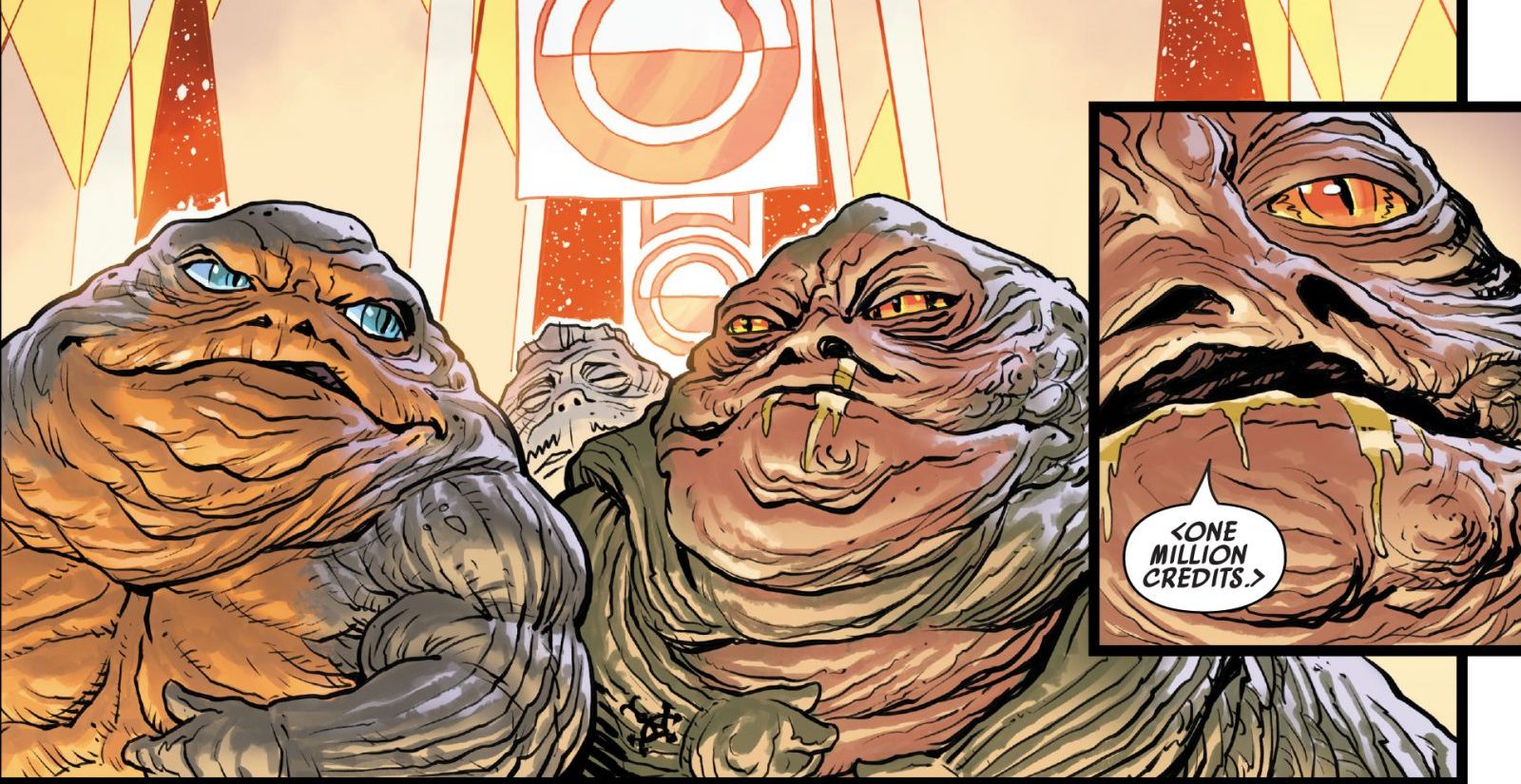 Jabba the Hutt has won Han Solo, but it isn’t over yet. As Boba has geared up and is ready to crash this party, he runs into two problems. 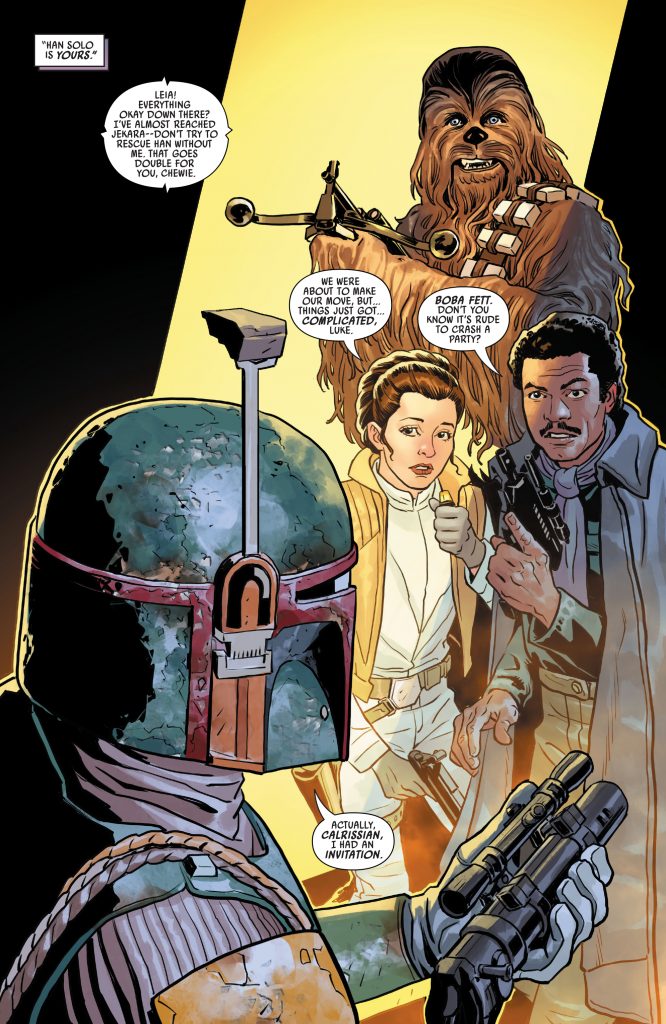 ….he runs into our Rebel crew, who have snuck inside, with Luke on the way. If this wasn’t enough of a spanner of the works for Boba, things are about to get worse for everyone at the party. 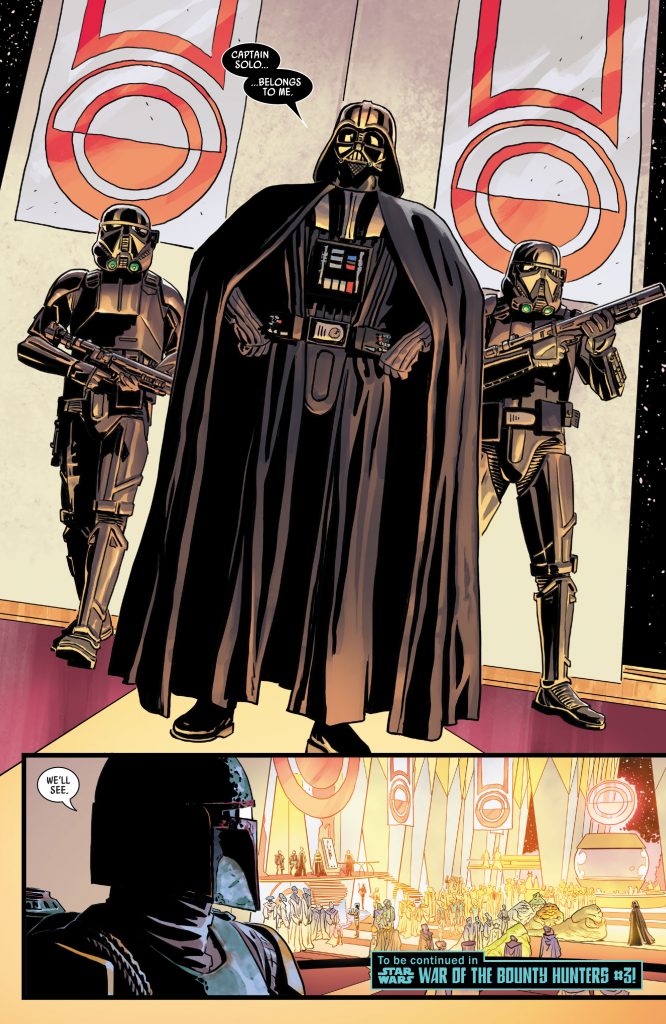 The Dark Lord of the Sith himself has crashed the party and he wants Solo.

It’s a crazy cliffhanger, and given how much the issue intertwined with Doctor Aphra #12 it will be no surprise if we see this party from multiple angles in the coming month.

The artwork for this issue didn’t feel as strong as the first one, with the light coloring giving everything a bit of a washed out feeling at points. The slower pace of this issue allows for all the pieces of this last months crossovers to move into place, hopefully for some insane meetings next issue. While not as strong as its predecessor this series is still as exciting event as ever and anything could happen. 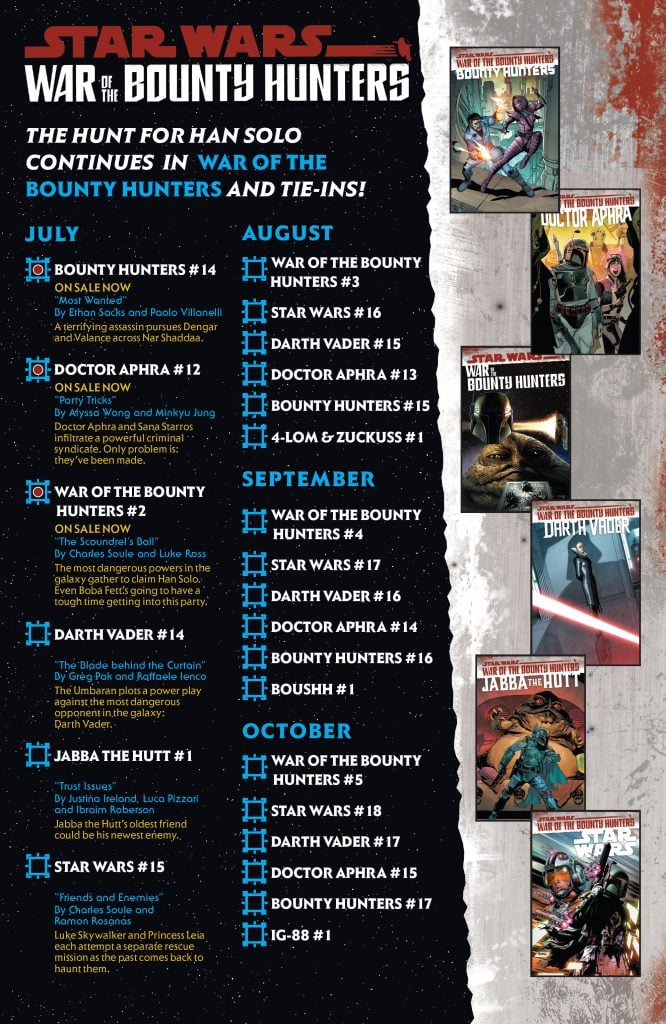 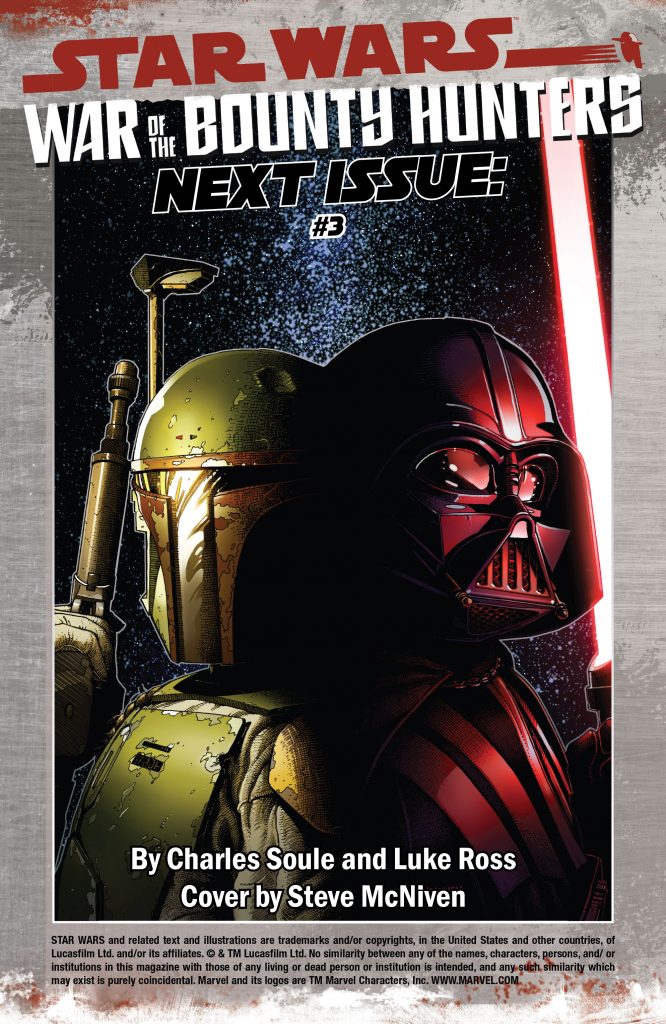 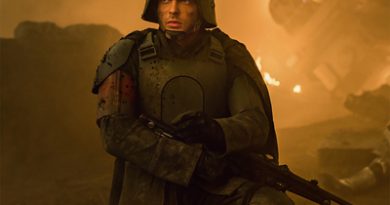 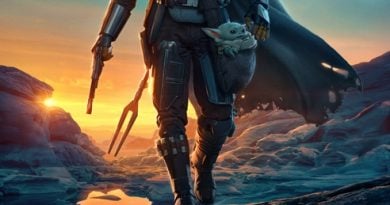 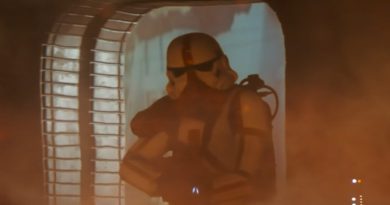 Updated with A New TV Spot! IG-11 Speaks in New Teaser for ‘The Mandalorian’