Editorial: 'Star Wars: The Bad Batch' Is an Echo of Other, Better Shows - Star Wars News Net Go To Top
Skip to content 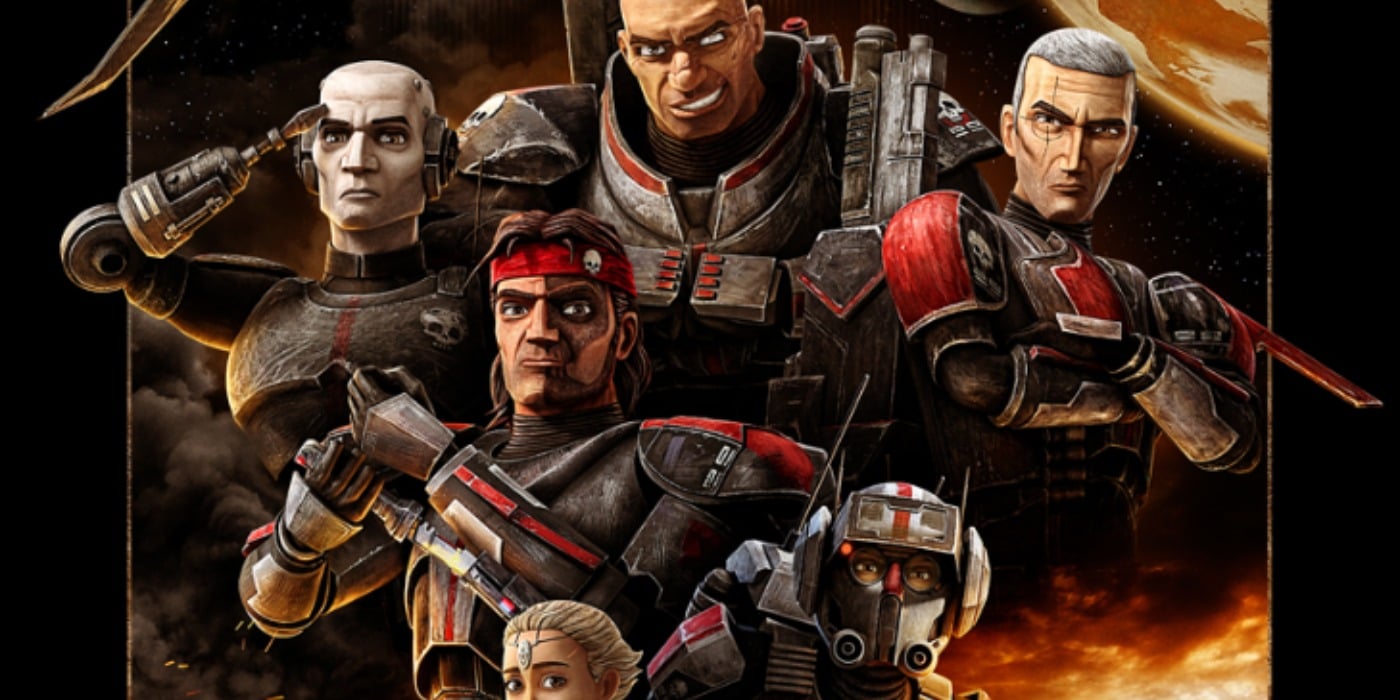 It’s a show everybody loves. The main characters are mercenaries – bounty hunters, really – in armor. One of them is a mysterious child clone. There’s a baby version of a beloved alien character. They’re all being chased by Fennec Shand. Is it The Mandalorian? No, it’s The Bad Batch, but Star Wars fans might find it hard to tell.

“Everything rhymes,” as George Lucas once said of the mythic dimension of the larger Star Wars narrative. Some things should repeat within the story. The movies and now the expanding galaxy of streaming series on Disney Plus shouldn’t echo each other overtly, though, but five episodes in, The Bad Batch is feeling very, very familiar.

On one hand, the show is a direct continuation of the Clone Wars, focusing on Clone Force 99 in the immediate aftermath of Order 66. The clones end up on the run, and that would be unique enough on its own to follow the story of clones in the shadow of the Empire. But The Bad Batch adds another wrinkle by making them the wards of a mysterious child, Omega, a clone with an uncertain origin and destiny.

That’s pretty close to the premise as The Mandalorian. The similarities only continue. Episode five, “Rampage,” turns them into mercenaries working for or at the very least in concert with The Guild. They are now effectively a unit of Din Djarins. To make matters worse, the bounty hunter Fennec Shand is hunting Omega, the clone child.

The very plot of “Rampage” is virtually identical to a number of episodes of The Mandalorian. Both “Chapter 2” and “Chapter 9” of the live-action series feature the main character doing a deed in exchange for information or supplies, as the Bad Batch does. “Rampage” echoes the conceit very more so by having the object of their mission be a baby Rancor.

The cosmic success of Grogu as a merchandising machine is hard to deny, and he’s not the first adorable character that Star Wars has introduced. But he seems to have influenced the baby version of the Rancor, and certainly the concept of Omega. On the surface, neither a child Rancor nor a clone is a problem in Star Wars. Pinched together, they are.

The Bad Batch needs desperately to establish its own identity. Right now, it is functionally season eight of the Clone Wars. Again, there’s nothing really wrong with that. But the visual identity of the show makes it very hard to distinguish. That said, the cinematography of the show is truly outstanding, as is the direction. No animated series has ever looked this good.

There are many differences between the shows, of course. The time period, for one, though the two shows explore the period after a major political upheaval. To its credit, The Bad Batch delves much more into the political ramifications of the fledgling Empire. This is a fascinating period in galactic history never really explored on screen before.

Omega is not Grogu, though she is similarly preternaturally competent. Where Grogu is highly adept in the Force, Omega is Wesley Crusher levels of smart and capable with everything from small arms to computers. She is at the center of a massive mystery having to do with clones – and Kamino – and it’s not out of the question to connect the two at this point.

While that may be intentional – the architecture of Dave Filoni’s work in Star Wars is precise, if flexible – it would only make the situation worse. The mystery box uncertainty of Emperor Palpatine’s clone status in The Rise Of Skywalker was enough, really, for this era. To try and link them all up would be to constrict a galaxy-sized narrative down to something very insular. But that’s speculation.

What’s certain is The Bad Batch is treading well-trod terrain. The storyline is effectively the same as The Mandalorian, down to borrowing Fennec Shand. Shand is a great character and it’s great to see her in the context of the rest of the large narrative, but her role here is too similar. The show is repetitive and easy to anticipate.

It wouldn’t be so bad if the characters were more compelling. Right now, and it is early days, the characters are little more than caricatures. The Bad Batch was designed for a Clone Wars arc that played off of their individual attributes, and that worked in the context of those episodes. But with them as the sole focus of this show, their lack of dimension becomes more and more obvious.

“Rampage” features some nice character beats between the crew, especially Omega and Wrecker, but there would need to be a lot more for the series to sustain itself. Without the Clone Wars ability to hop around the galaxy into different perspectives, The Bad Batch feels claustrophobic, only making its familiarity that much more stark. 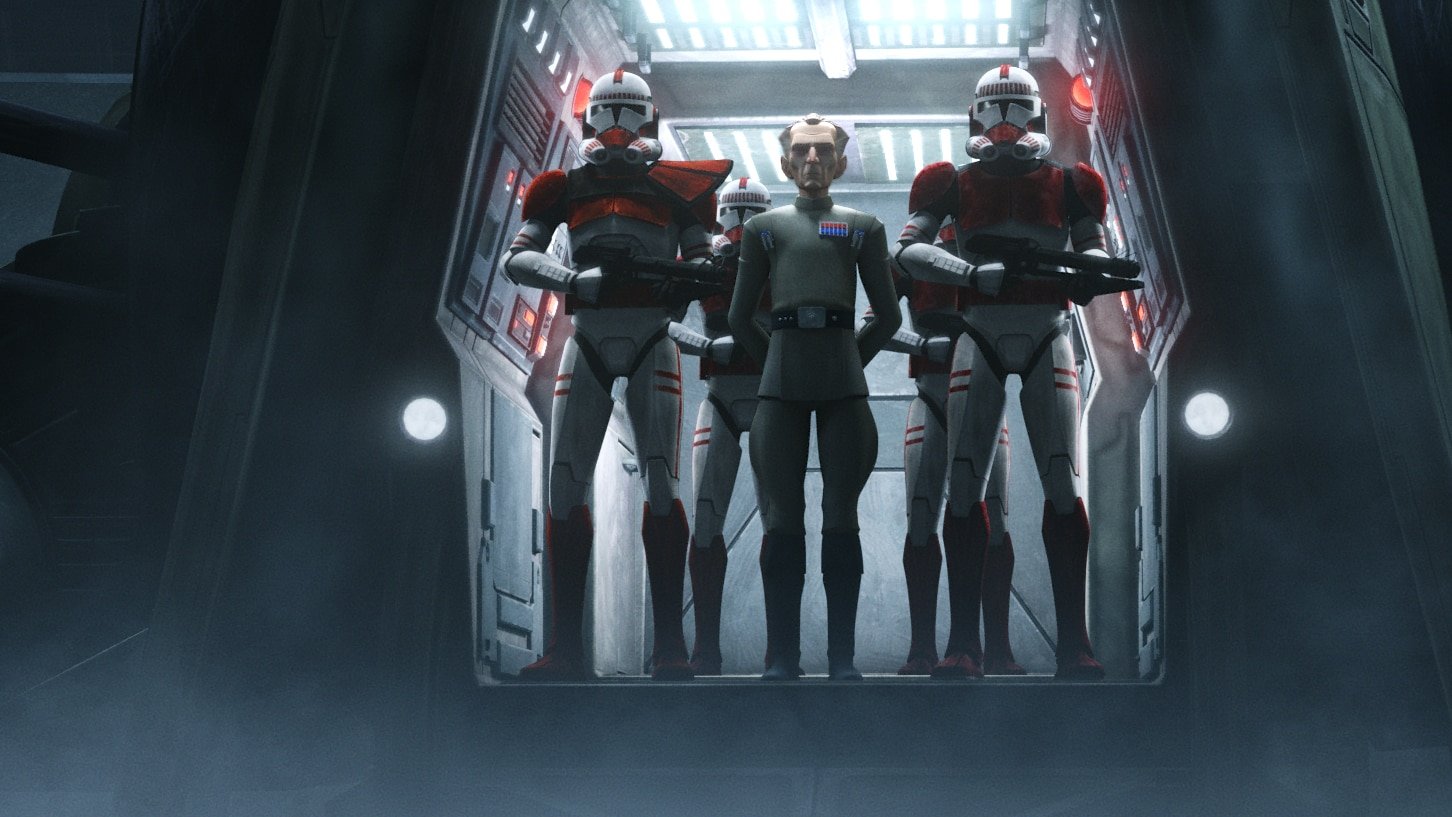 No Star Wars show or movie is ever going to escape connections to the rest of the story, and as fans, we wouldn’t want them to. Those connections and references are critical to developing the understanding of the world, such as Grand Moff Tarkin’s role in the transition from the clones to conscripts between the prequel and original trilogies.

And Star Wars should echo itself, thematically or visually, where it makes sense. What it shouldn’t do is begin to mimic itself. The success of Star Wars is the synthesis of so many disparate and fascinating elements. Space opera. The Western. The samurai movie. Fusing them together with Arthurian mythology and other unique sources creates something wholly unique.

The Star Wars galaxy is big enough for a multitude of different types of stories. The Bad Batch should try to tell its own. The show features an outstanding creative team, so there is certainly the possibility for things to improve as the show goes on. Things could even change in a hurry if things get twist-y by the end of this first season.

As fans get more and more Star Wars content in the future, the expectation should be for variety, not familiarity.