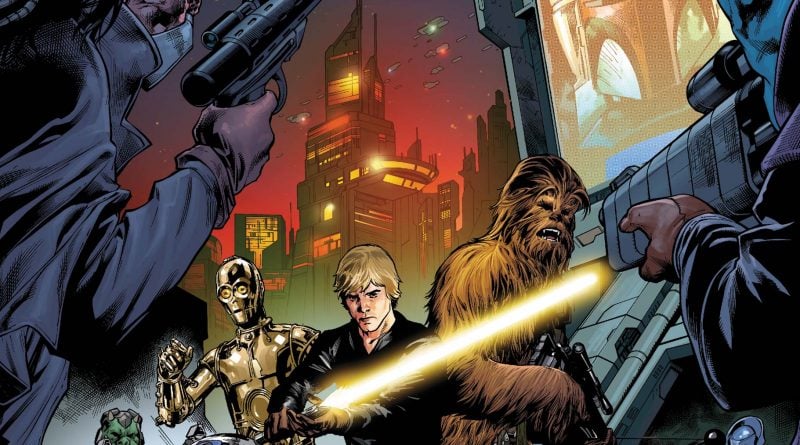 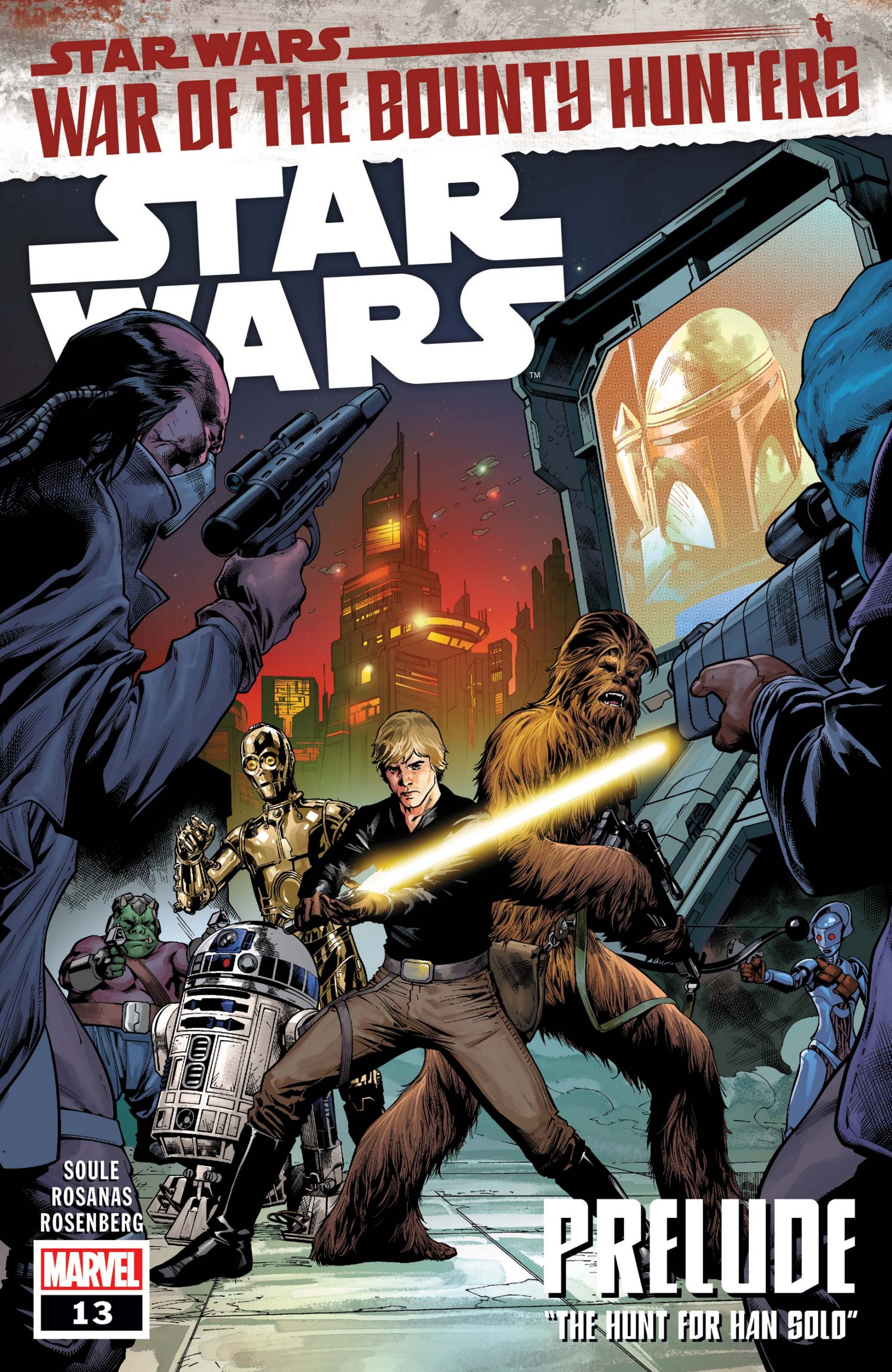 After last weeks War of the Bounty Hunters: Alpha issue, the crossing over officially starts as Star Wars #13 continues May’s prelude month for the event.

While Soule’s issue last week did a lot of heavy lifting for the crossover, this one doesn’t quite live up to that. It’s  a more standard but enjoyable affair. Luckily, we do get to see Luke for the first time in a few issues and see the progression he has made as a Jedi with his yellow-bladed lightsaber.

The issue’s opening crawl puts a pin in the Leia, Lando, and Startlight Squadron story of the last few issues, allowing us to transition to the hunt for Han Solo. 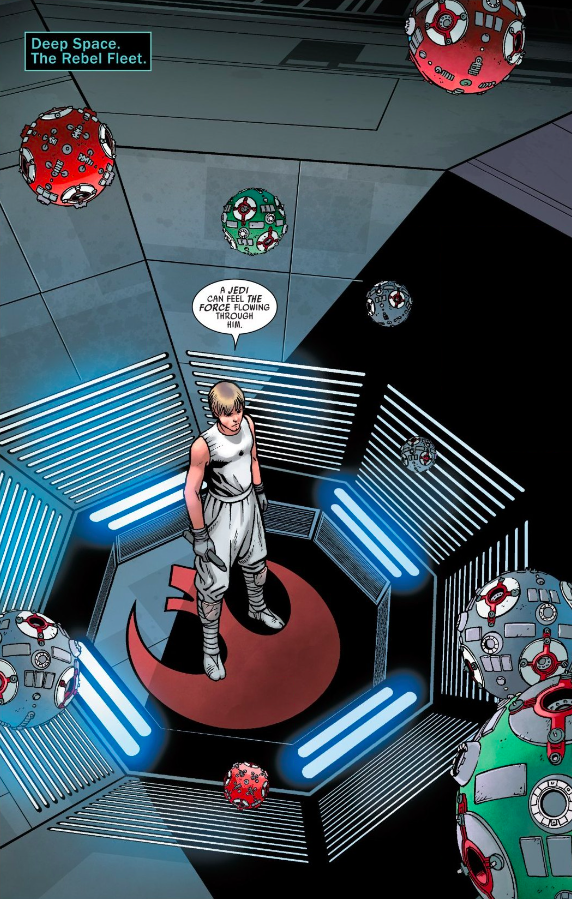 The story begins with Luke against multiple training remotes, he’s come a long from the boy we saw struggling against one in A New Hope. It’s also really exciting the yellow lightsaber we saw him acquire earlier in the series is getting so much use and wasn’t just for show. It looks so cool, artist Ramon Rosanas makes great use of a double page spread of Luke defeating the droids.

Threepio enters the room, along with Artoo, just as Luke defeats the last of the droids without even looking. Threepio states that Artoo has something to share with Luke and the protocol droid has come along to translate. Artoo begins to explain it’s connected to Elphrona.

This is actually a minor continuity slip, as Luke actually found the Lightsaber in the 6th issue on the planet Tempes; Elphrona is the planet Luke visits with Ben Solo in Soule’s series The Rise of Kylo Ren, a key planet in Ben’s journey towards the dark side. No big deal but worth mentioning. Regardless, Artoo is interrupted by the arrival of Chewbacca. Threepio plays translator again and the Wookiee has a mission.

Chewie heard from a contact that Boba Fett may have been seen on Nar Shaddaa and asks Luke for his help. Luke agrees and they decide not to bring Lando since Chewie believes he can’t be trusted–a wise move, as we’ve seen in previous issues Lando is still conspiring with Jabba the Hutt to potentially betray the Rebellion.

On Nar Shaddaa we discover Chewie’s contact is Sagwa, the Wookiee we saw him free in Solo at the mines of Kessel.

This is a nice little nod to the film and it’s good to see that at least some of the slaves escaped Kessel. Sagwa informs the group (through Threepio) that a new champion was recently crowned at the Garkata Fighting Arena. 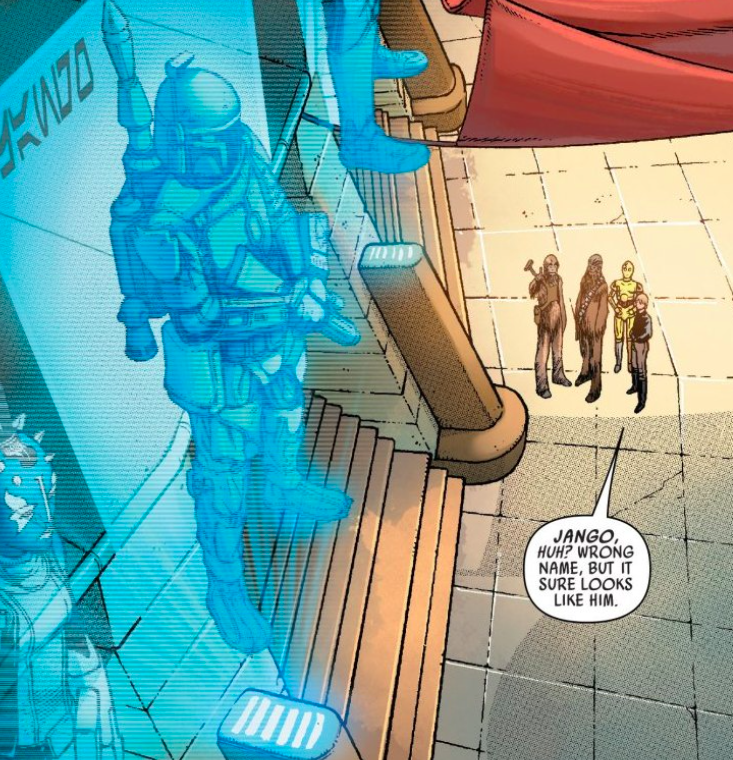 While the fighter used a different name, Sagwa is a guard at the arena and suggests that the arena’s records might hold some information that could help the team track him.

After bribing the ticket officer leads to a dead end, Luke asks a few too many questions, and she presses a hidden button summoning her bosses–the Kanji. 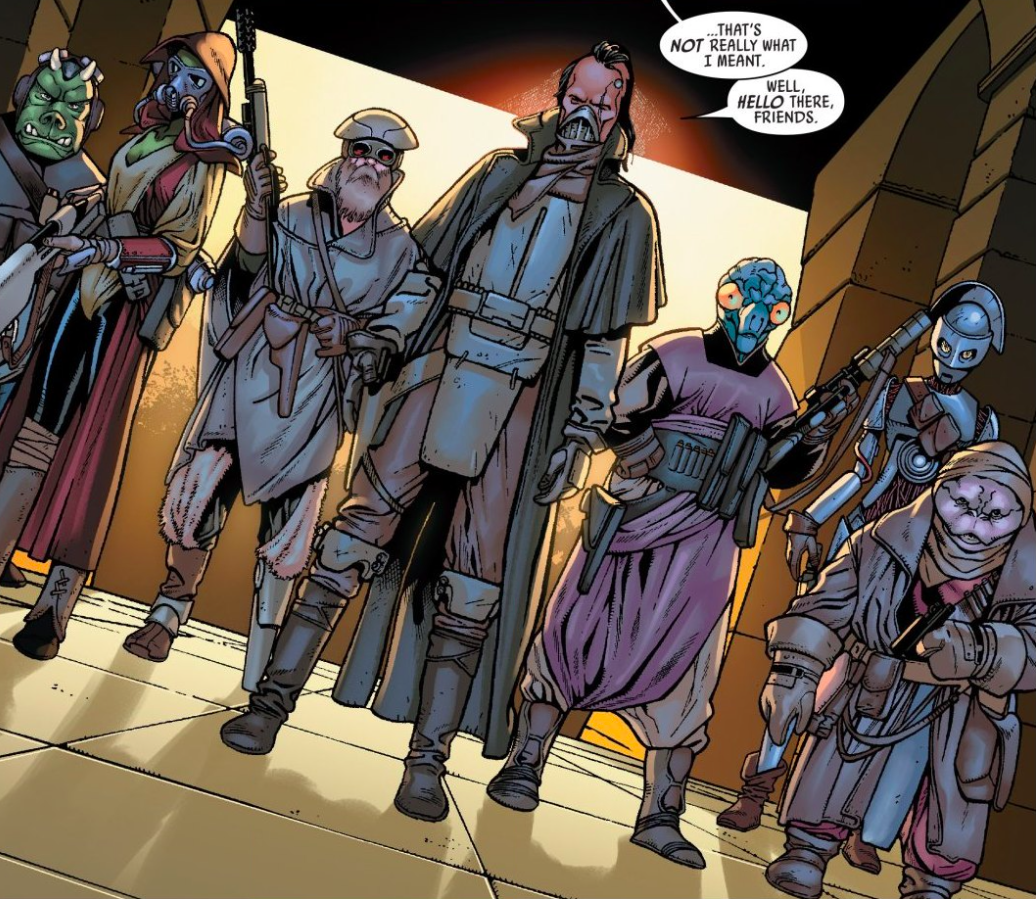 Not quite the charming ‘Hello There’ we’re used to! It turns out ‘Jango’ (who, if you read the Alpha issue, you know is Boba Fett in repainted armour) owes a lot of money for winning his match against the Kanji’s prized fighter. They want to know where he is, and when Luke explains they’re looking for him too, that answer isn’t good enough. 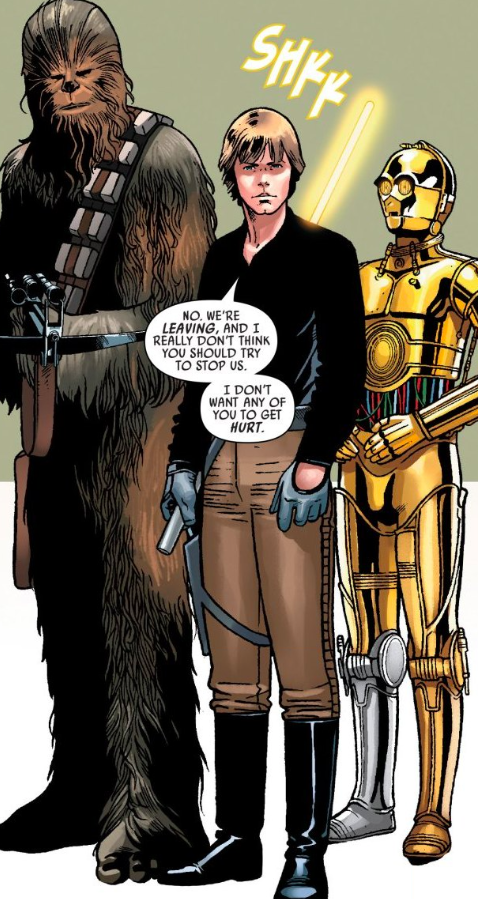 Luke activates his lightsaber behind his back with a reverse grip. It’s an awesome shot and encapsulates how much more confident he’s become in himself and his skills as a Jedi. 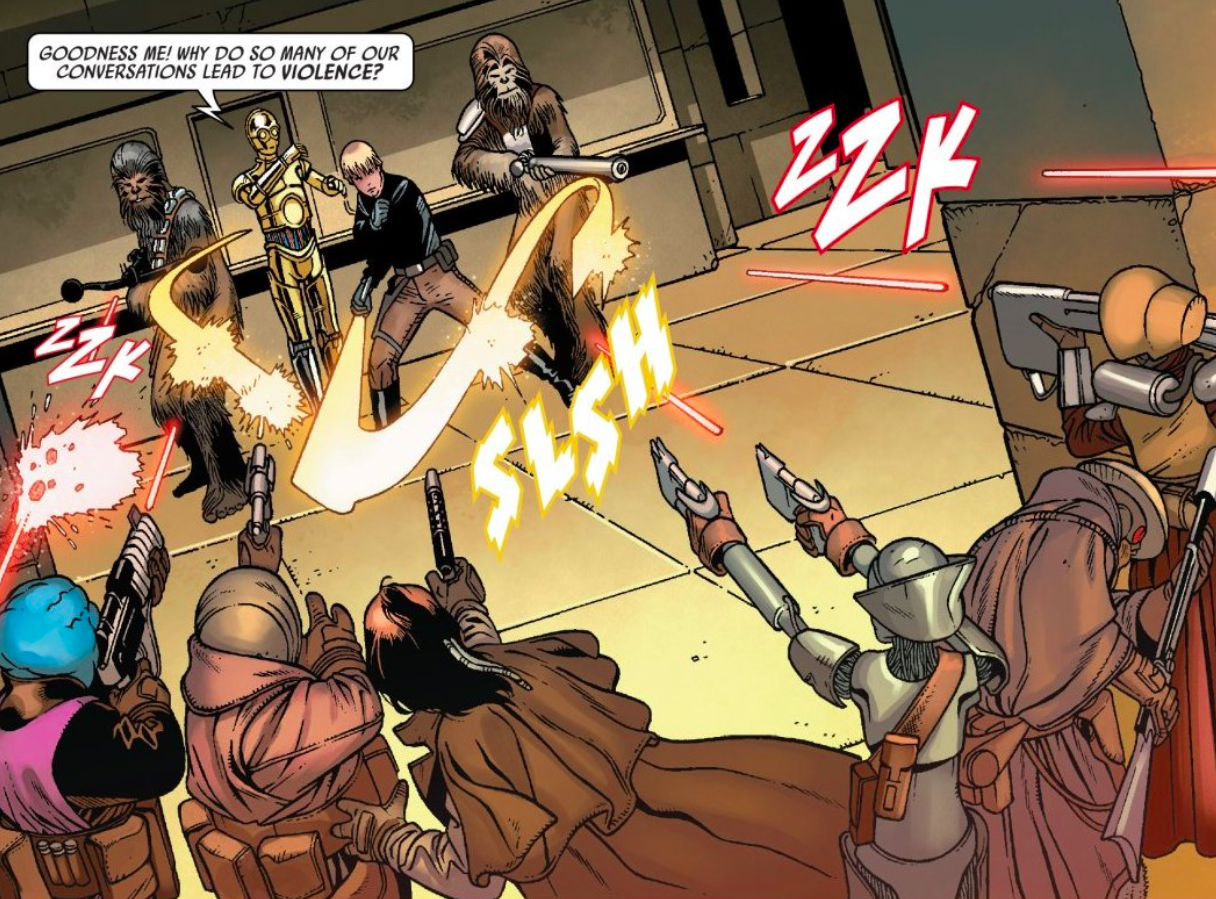 Of course, the Kanji gang aren’t going to back down and the fight begins. Luke does his best to disable the attackers: blocking shots and Force-pulling blasters. Eventually, the group are pushed back against a wall behind some pillars. Chewie wants to stay, but Luke voices the reality of the situation.

Luckily, Sagwa knows a secret route and takes the team away from their attackers. This isn’t much of an improvement though as the original Kanji group have called in backup. 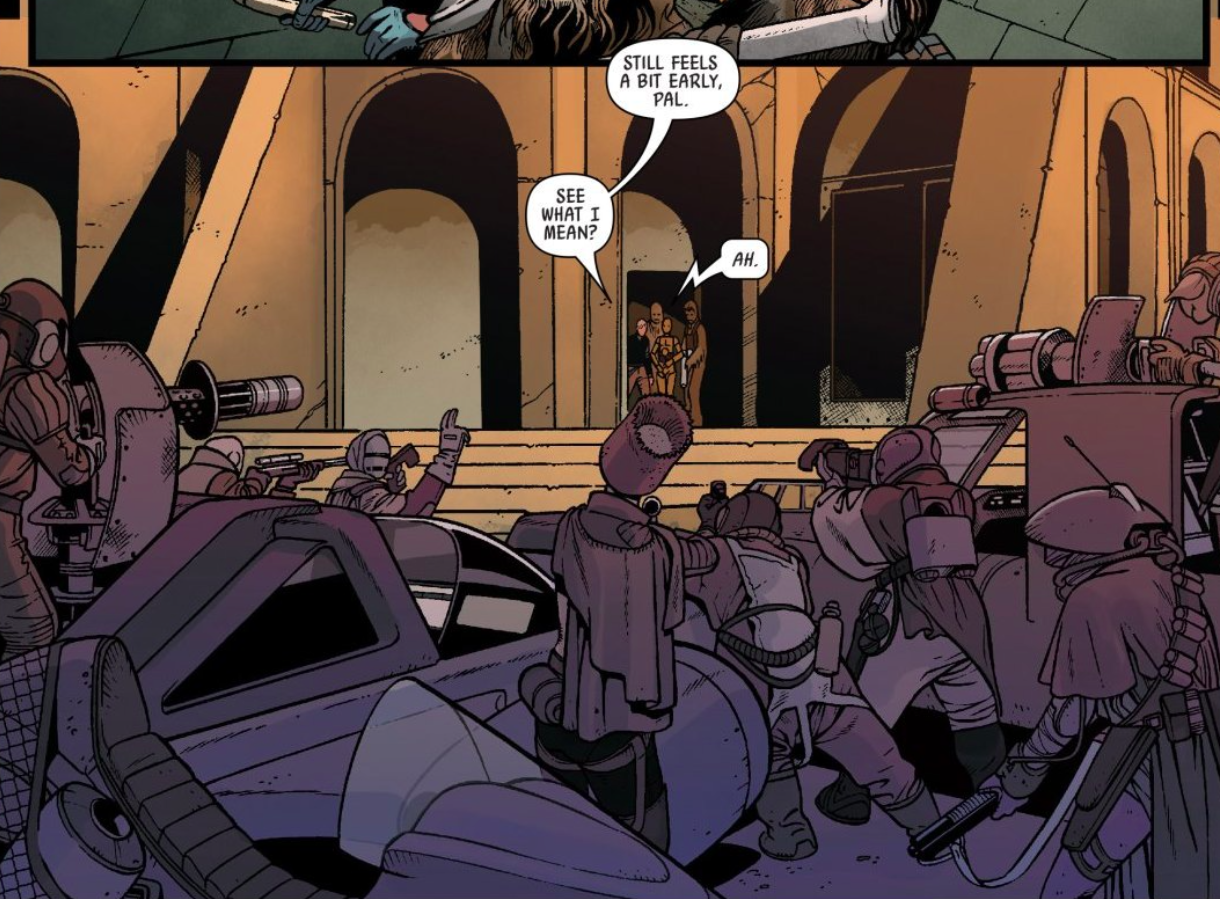 Luke is able to destabilize a speeder and jump aboard, sending blaster bolts back from the hood while Chewie drives towards the Millennium Falcon.

As they weave through the streets of Nar Shaddaa, Luke asks how many people are in Kanji, and in what seems like a very John Wick-esque moment, it appears to be everyone! 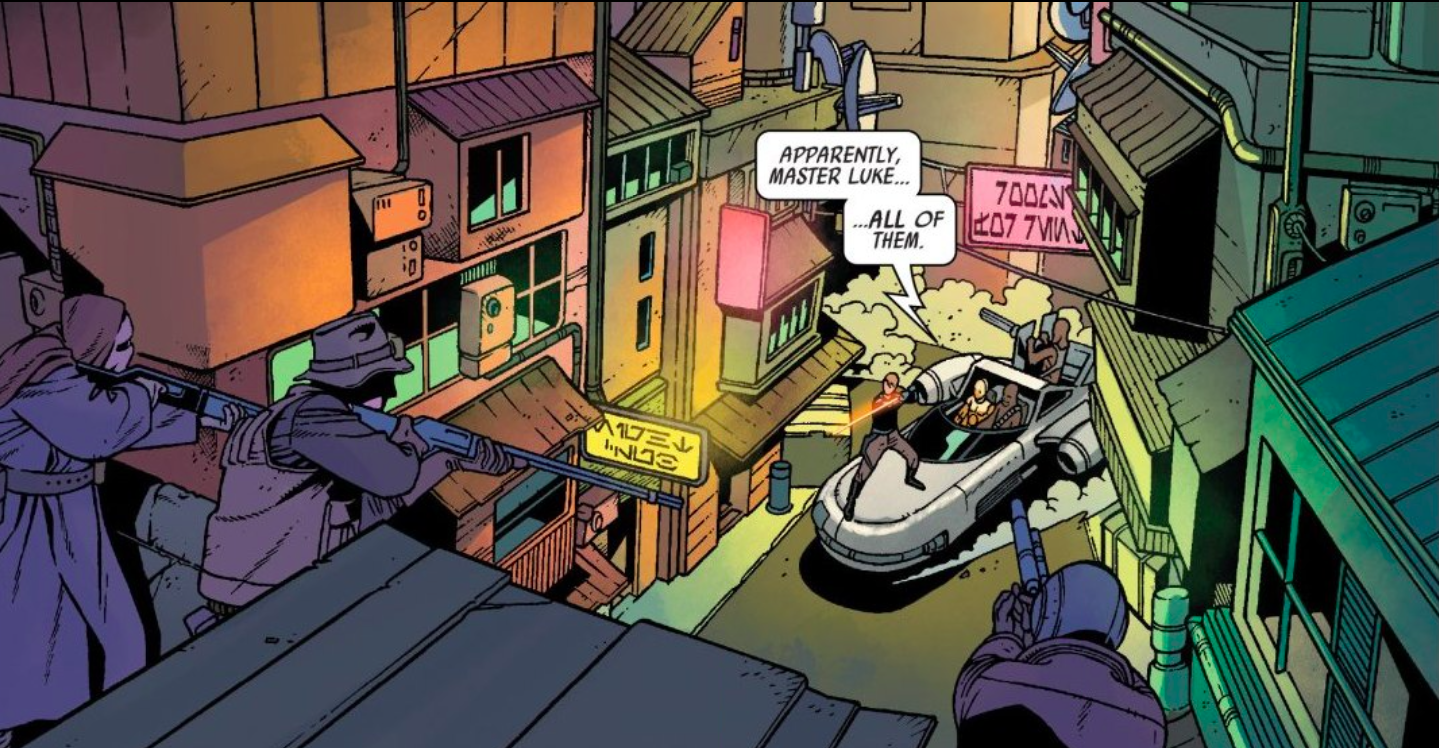 The speeder makes it to the Falcon. Artoo starts the engines, Chewie jumps into the pilot’s seat and gets them off the planet. The leader of Kanji informs his fellow gangster that they’ll inform the Imperial garrison of their Jedi sighting for money.

Back on the ship, we find out that Sagwa plans to join the Rebellion, a nice full circle arc for the character, and Artoo finally gets his news out.

It appears Artoo has a list of former Jedi outposts, a database he acquired on the Death Star (which at this point has been over three years, but it’s possible finding recent sites has allowed him to work out the meaning of the list).

The list is compiled by Luke and he comments it’s enough locations to keep them busy for decades. Shortly after, Chewbacca wants to see them all in the cockpit, Leia is telling the Falcon to return to the main Rebel fleet as it’s receiving a communication from an unknown party in possession….

This brings all our main heroes together for the start of the War of the Bounty Hunters next month. This issue had its highlights: seeing Luke’s progression as a Jedi, connections to the Alpha issue from last week, and a continued arc for Sagwa. Overall though it feels like an issue to tide us over until the big event starts up: not a whole lot happens and our heroes don’t accomplish anything.

This issue may have been better served to have come before Alpha, as it would have added a layer of mystery to the issue. However, for those that are only reading the Star Wars title and nothing else, this does a good job of bringing those readers up to speed for the main event next month. 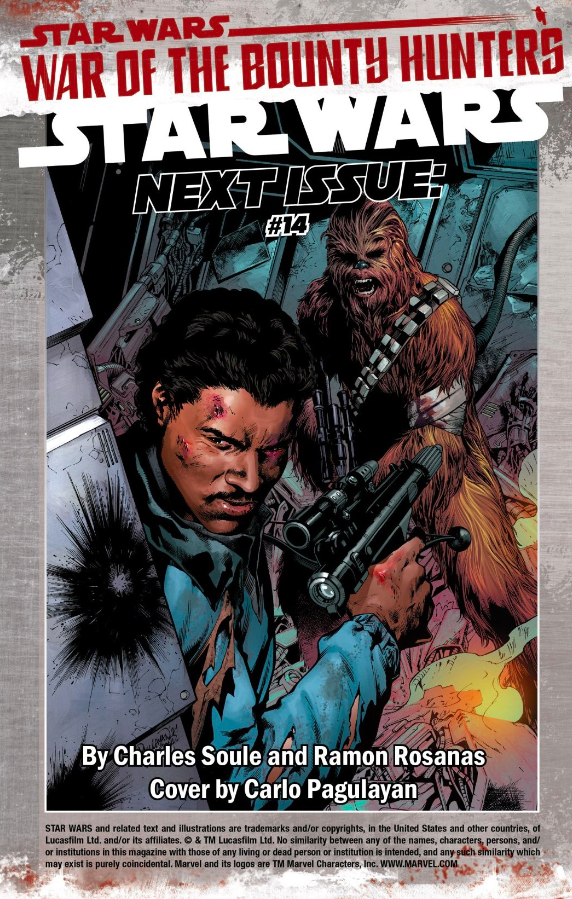 Happy Reading and may the force be with you! 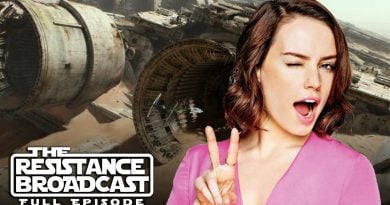 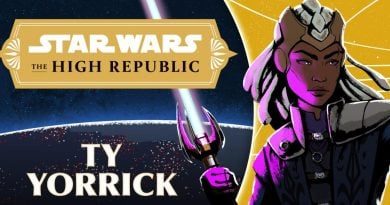 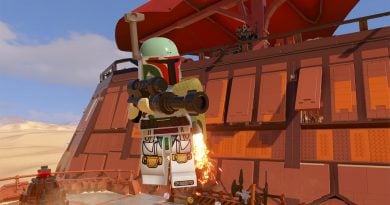