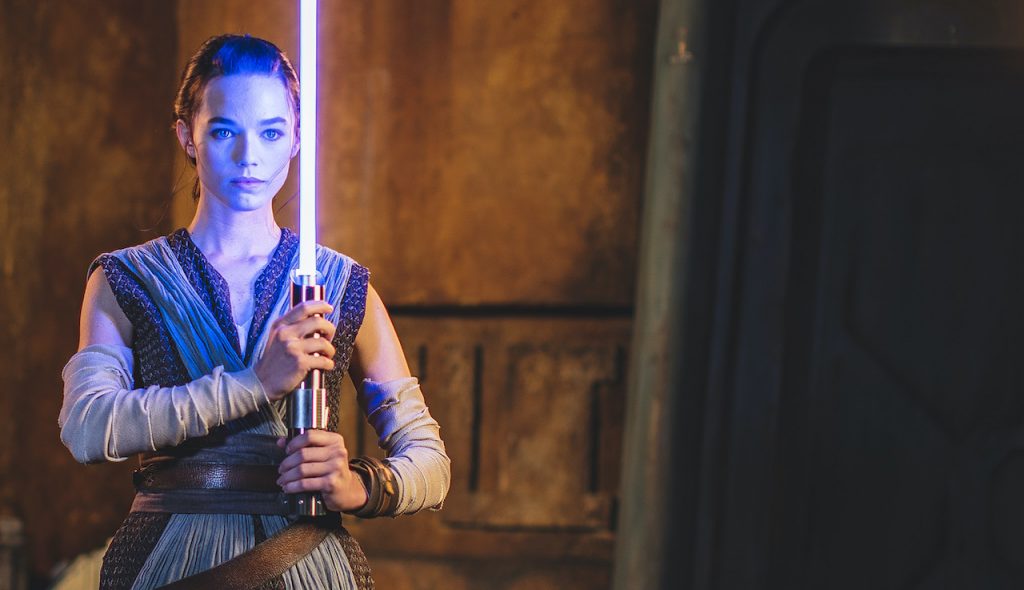 Happy Star Wars Day! So that “real” lightsaber Disney Parks teased has finally been revealed in a new video. The video shows a Disney cast member, as Rey, igniting a hilt extending a lit lightsaber blade seemingly out of nowhere. It is extremely impressive to say the least. The lightsaber will be a part of the immersive and interactive experience at the Galactic Cruiser hotel. Check it out below.

The lightsaber will be a part of the in-story experience at the Galactic Cruiser hotel. Here are the details about the new feature, which has exceeded expectations and should make for a much more disbelief suspending good time.

Yes, that’s a new type of lightsaber Rey is holding in her hand, created by Walt Disney Imagineering Research and Development. Guests who experience Star Wars: Galactic Starcruiser will be the first to see it in action – along with so much more – starting in 2022 when this amazing new two-night adventure debuts. Watching that lightsaber activate right before your eyes will be just one of the countless ways that, from the moment you arrive to the moment you depart, you’ll be plunged into a Star Wars story where your decisions and actions – or even the casual conversations you may have – determine how your personal journey unfolds.”

As of now it seems like the lightsaber will not be for sale to the public, but Disney loves making money and they don’t need to do market research to know that fans who can afford it (we imagine it will be a much heftier price tag than the typical $250 for Hasbro Force FX sabers), will buy it.

The science behind the lightsaber has been detailed via a 2017 patent. You can see how the lightsaber works in our article from a few weeks ago here.

The rest of the two-day experience at the Galactic Cruiser is detailed on the Disney Parks blog. The experience is set to launch in 2022.

May the Force and the Fourth be with you.