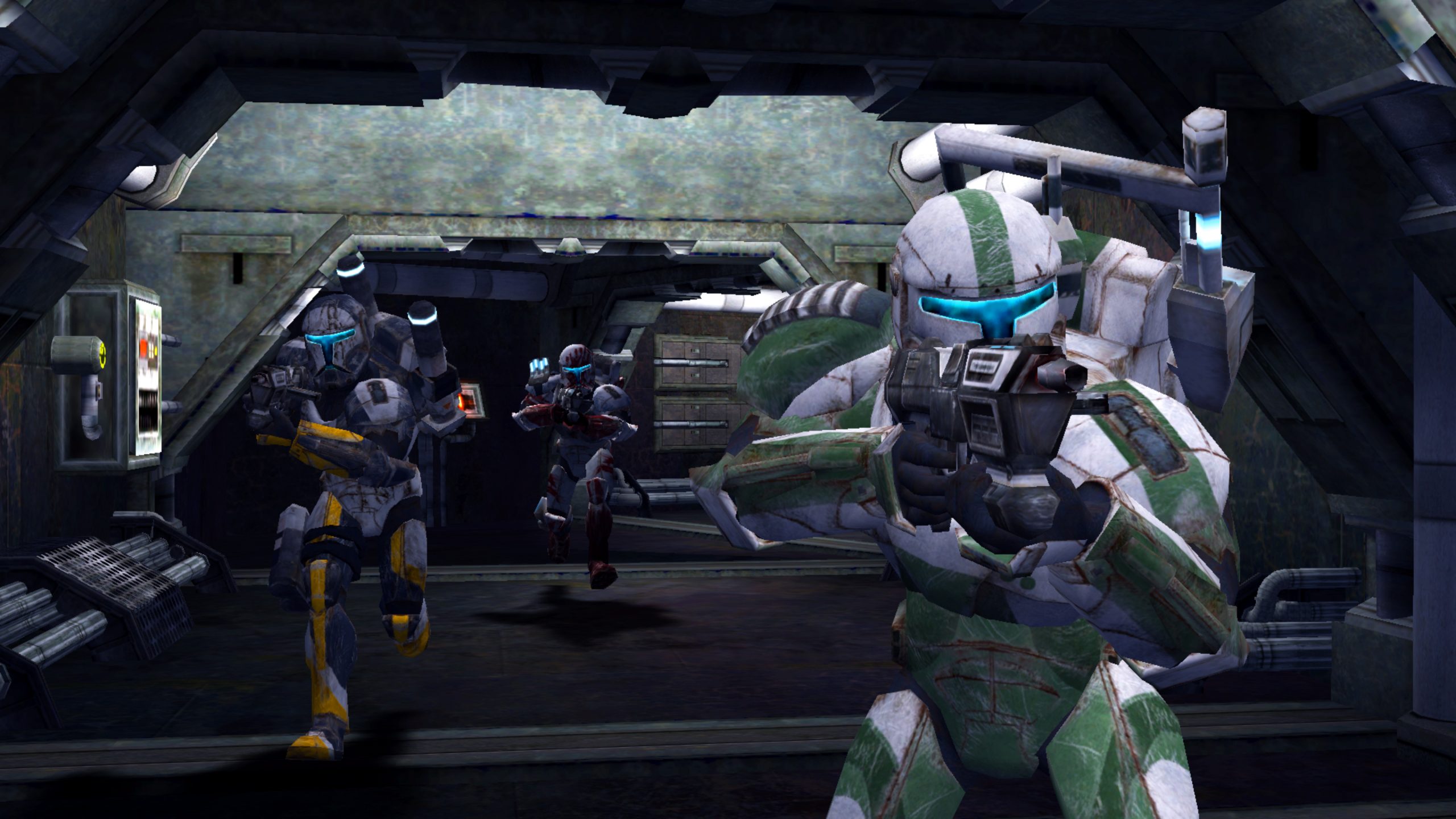 You and your squad of clones vs. the Separatist Droid Army. Star Wars: Republic Commando is back!

Earlier this year, a surprise re-release of the 2005 LucasArts classic Republic Commando was announced by Aspyr and Lucasfilm Games. For the first time ever, the game has made the jump to PlayStation and Nintendo consoles, as it was originally limited to Xbox and PC. This remaster follows in the footsteps of other recent Star Wars re-releases by Aspyr, such as the Jedi Knight titles or Racer, which also hit PS4 and Switch. The developer and publisher has also touched up the KOTOR titles over the years, and recent rumors suggest they might be working on their biggest project ever: a reboot/remake of the first Knights of the Old Republic.

If you haven’t checked out Republic Commando before, this game might feel quite fresh, since its formula was only tried once in the Star Wars universe. It’s a tactical FPS that follows the legendary Delta Squad during the Clone Wars, starting with the first Battle of Geonosis and through increasingly difficult missions. You play as the squad leader, nicknamed Boss, and you lead and coordinate three other clone commandos (and brothers): Scorch, Fixer, and Sev. It’s a “band of brothers” kind of story that felt quite special back in 2005 because of its emphasis on humanizing the clone troopers, something that Dave Filoni would later take a step further. Delta Squad even had a brief cameo in Season 3 of The Clone Wars, effectively making the jump to the current canon. Additionally, clone commandos were eventually included in EA and DICE’s Star Wars: Battlefront II.

The missions normally play out like a sequence of sections which require you to constantly readapt your strategies. For example: one of your boys may be needed to slice a control panel while another plants an explosive, so you and the remaining commando need to give them cover. Tougher battle droids can’t be taken down fast enough by just one guy, so you’ll need to tell the whole squad to focus their fire on it while also taking cover from lethal attacks. The “run and gun” approach simply doesn’t work in this game, and many times you’ll find yourself surrounded by enemies and alone because you didn’t plan in advance or quickly take advantage of your surroundings. The whole game’s designed around the squad mechanics and constantly forces you to think on your feet. 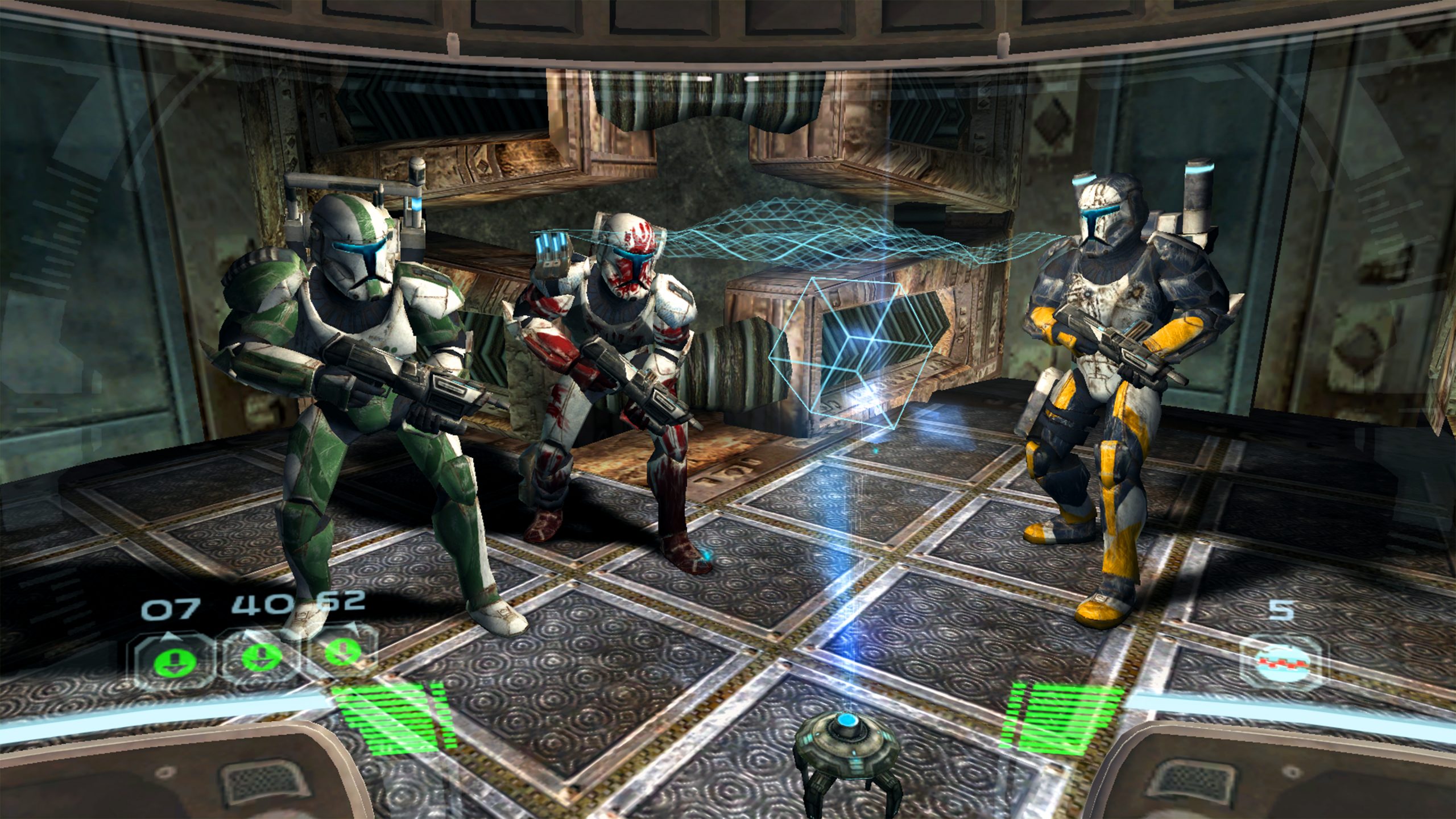 In many ways, this re-release of Republic Commando feels like the ultimate version of the game. The folks at Aspyr have made sure to include reworked, smoother controls (which can also be customized) and trophies/achievements, something that completionists always appreciate. Other improvements include an upscaling and overall polish of the original graphics; just don’t expect any miracles, as this is nevertheless a game from 2005. The original artistic vision has been treated with care, and this project, like other previous re-releases by Aspyr, was all about upgrading the OG game for newer generations and veterans alike. However, not everything feels as good as it should, and I’m sure most of these problems couldn’t be solved with a remaster…

First of all, the AI partners can still feel unresponsive at times; while the tactical system and contextual orders work as intended, your squadmates often take a while to register those commands, or stick to a position which isn’t useful anymore until you manually cancel their current action. After the first hour or so, you get accustomed to this and start to develop a routine of “giving-cancelling-giving” orders to make the squad work as smoothly as possible. Sometimes you will get lost in the heat of the action only to realize the firefight is harder than it should because you forgot to reassign Sev, who is sitting like 45 meters back around a corner doing nothing. These moments kind of sour the overall tight feeling that the experience as a whole retains, but I can’t see how Aspyr would have been able to solve this without completely rebuilding the game. It’s simply how the game was made more than 15 years ago.

Graphical and audio issues are minor, but also present. Some particle effects frequently glitch out, freezing in place or vanishing, and certain weapons used by friendly NPCs can be seen going through solid objects. I haven’t experienced any crashes on my base PS4 though. On the audio side, the game feels quite noisy, at least with the default volume settings. I highly recommend tinkering with the audio balance before jumping into the game, because the audio mix tends to get busy (again, it’s a 2005 title) and lacks enough channels to make music, voices, and effects feel distinct at times. 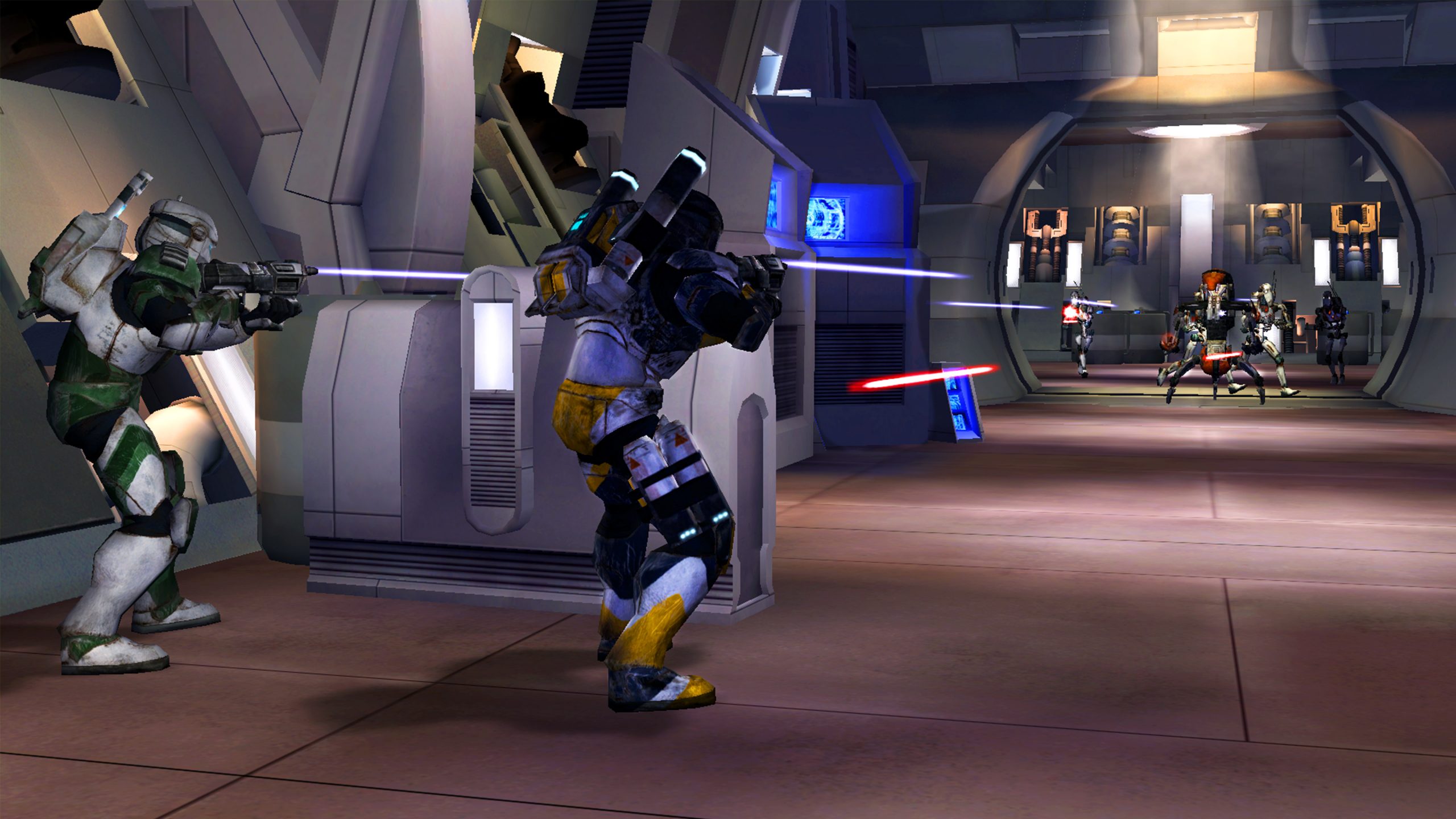 When it comes to performance, I’m happy to report that Republic Commando mostly sticks to the 60 FPS mark on PS4. I say “mostly” because there are some dips in heavy action scenes (mostly dealing with up-close particles) that seem to be tied to the game’s rusty engine rather than a lack of horsepower in modern consoles. I don’t really know how it behaves on PS5, but the Switch version does suffer from framerate issues even during “calm” scenes, which is disappointing if we consider how old the original game is. Aspyr might continue to tinker with that port, but it’s kind of a letdown after the great job they did on the Nintendo platform with the Jedi Knight titles.

Besides the game’s campaign, which lasts around nine hours on average, there are some extras available, such as interviews and bits of concept art. The original multiplayer game mode hasn’t made the jump to modern systems, but that was a given, as recreating the game’s online infrastructure simply wasn’t worth the hassle (the playerbase would be minuscule).

Everything else looks, sounds, handles, and plays like it should. It’s especially heartwarming to hear Temuera Morrison’s voice again while playing as a clone trooper (Dee Bradley Baker took over those duties long ago), plus Rena Owen (Taun We) and Tom Kane (a huge Star Wars voice acting veteran) were also part of the original cast, upping the “authenticity” factor. Jesse Harlin’s soundtrack is a banger to this day too: ‘Vode An’ hasn’t aged one bit, and his original themes (which co-exist with John Williams’ compositions) still make the game feel darker and fiercer than other Star Wars classics from the Legends canon.

Star Wars: Republic Commando is now available for digital purchase on Nintendo Switch and PlayStation 4 (playable on PS5) for $14.99.

Thanks to Lucasfilm Games and Aspyr for the review code.