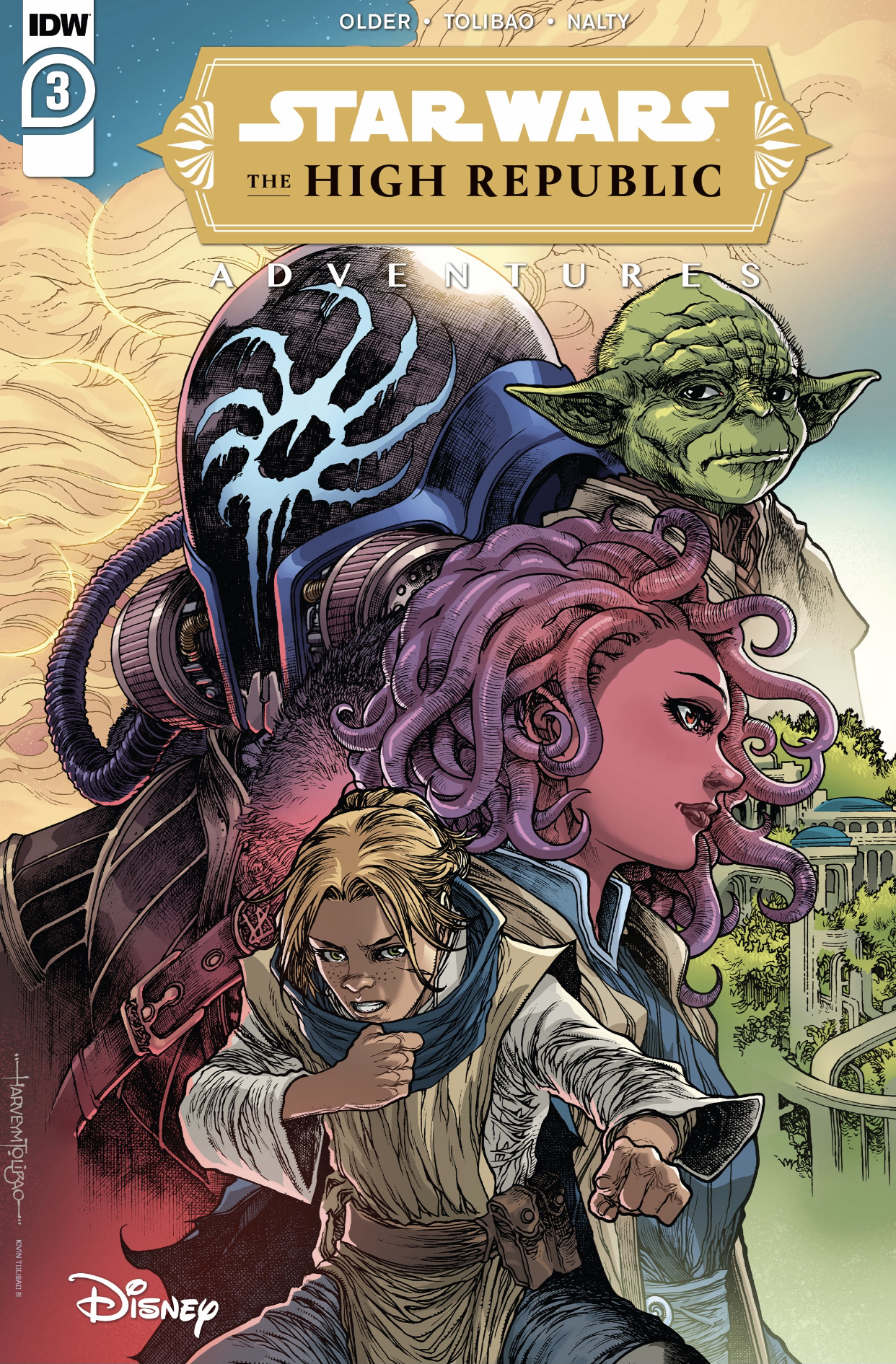 After surviving a disaster and brutal attack by the Nihil on Trymant IV, local children Zeen and Krix have gone their separate ways. And the direction each headed in couldn’t be more opposite of the other. Zeen discovered her connection to the Force upon the Jedi’s evacuation of Trymant IV. Both Zeen and Krix were raised not to trust Force-users, especially the Jedi. At the last moment, Zeen embraced her connection and joined a group of Padawans to defend against the Nihil. The betrayal Krix feels stays with him, while Zeen mourns the loss of her best friend. This collective grief has pushed them apart but the Jedi and the Nihil will use it to find each other. SPOILERS AHEAD…. 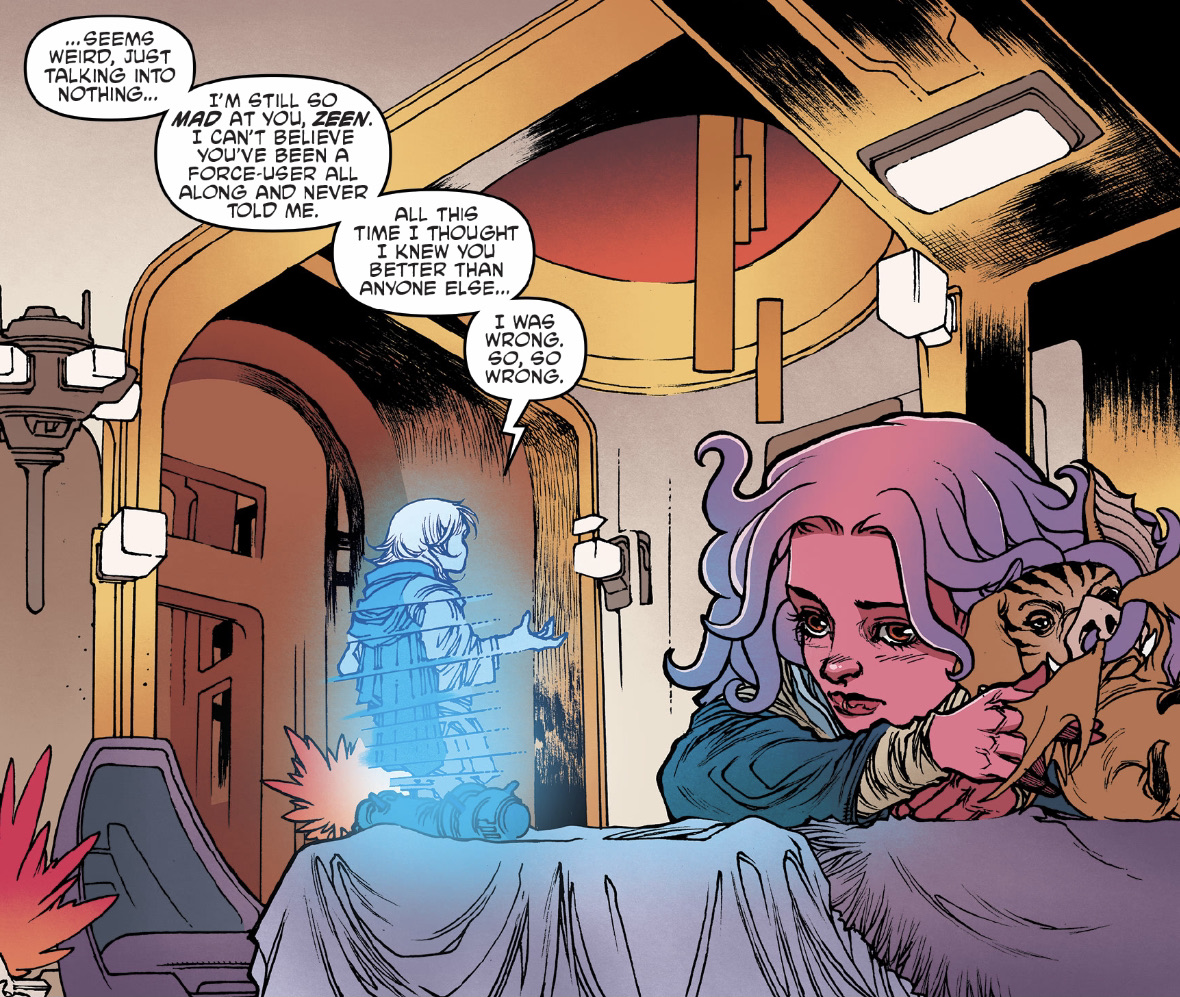 Writer Daniel José Older brings some tender moments to this issue. If you remember being separated from a friend as a child, that absence of companionship can feel unbearable. Older really hits that home as he establishes the longing both Zeen and Krix feel. Krix and Zeen sit on opposite sides of the galaxy, watching holographic messages of the other from the binary devices Yoda gave them. While Zeen tries to offer up an explanation about why she no longer wished to deny her connection to the Force, Krix can only express the betrayal he feels. This issue comes from each of their perspectives, a binary theme Older continues. 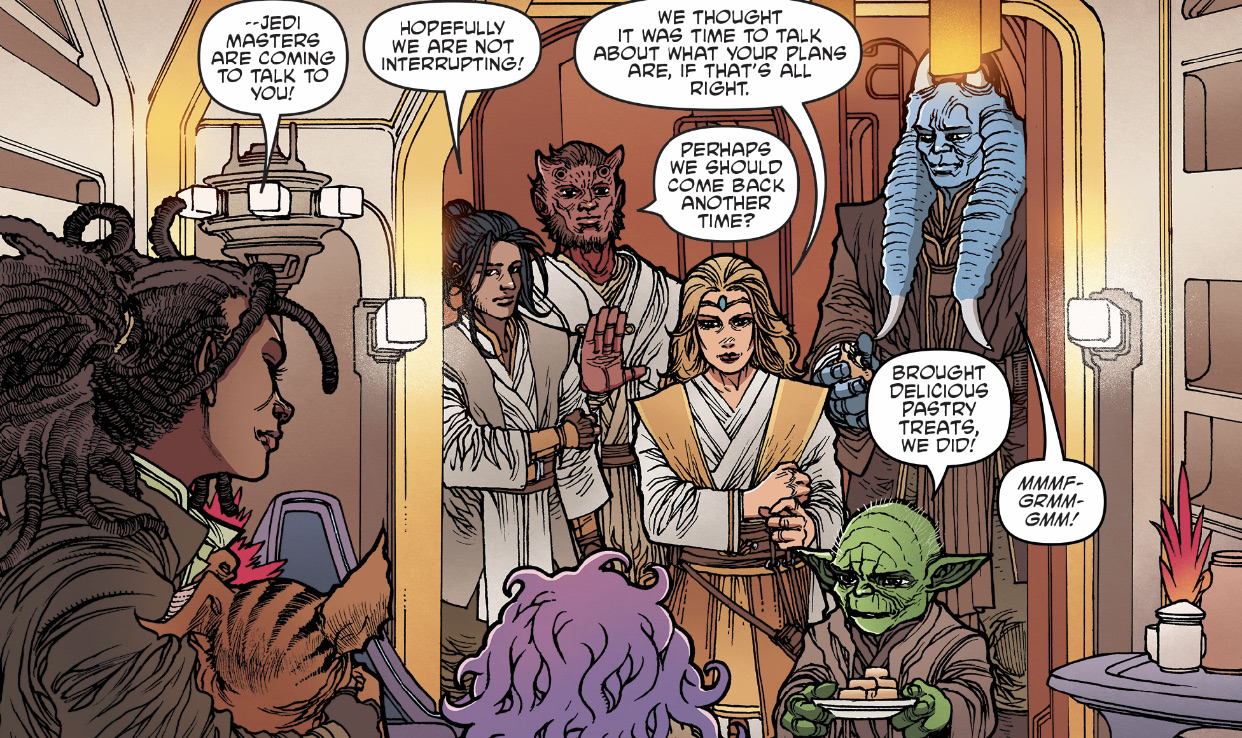 Zeen has been welcomed on Starlight Beacon. After making friends with Lula and the other Padawans she’s at a crossroads. While the Jedi debate whether or not she can be trained, Lula suggests they allow Zeen to decide her own fate. Who even says she wants to be a Jedi at this point? It’s good of Older to point out how the Jedi have difficulty seeing through their quasi-righteous intentions. They mean well but don’t realize they are taking the agency away from Zeen, who’s barely had a chance to catch her breath after leaving her home and losing her best friend.

Krix, however, is having a much different experience with the Nihil. He’s realized quickly a life among the Nihil is a life in constant survival mode. He’s isolated and scared and he blames it all on Zeen. Older does a great job letting these young characters feel their feelings in a very realistic way. Sadness often manifests as anger, especially at a young age. The sense of rejection fuels this too, that Zeen chose the Jedi over her friendship with Krix. Though he made his choice to join the Nihil, he blames Zeen for the sideways path it’s put him on. And to make things worse, Nihil leader Marchion Ro has decided to put Krix and an Trymant elder, Tromak, through a gauntlet of sorts. 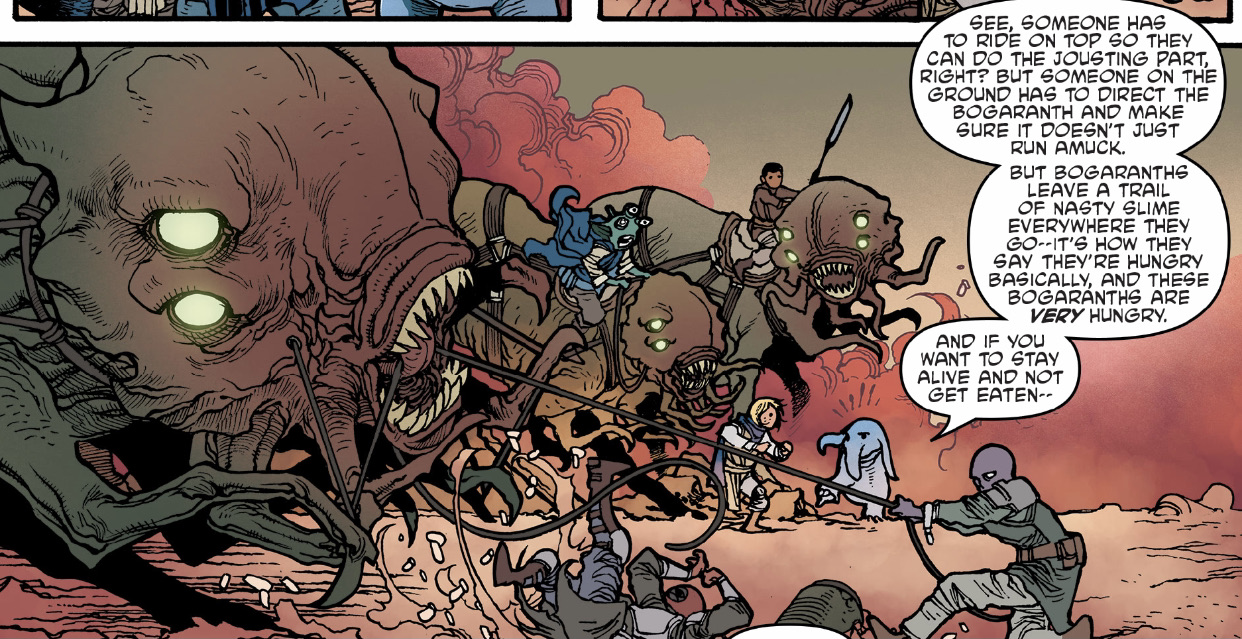 The Rink, which serves as entertainment for the Nihil. See the above for the only explanation about what this exactly is. This is the only part of the story I was a bit confused by. The most important thing to note is the Nihil are after an ancient Trymant relic and Tromak refuses to give them the location because of his religious convictions. While he and Krix make their way to the Rink, Tromak confides in the child, telling him the location so it won’t be lost if he dies. Selflessly, Tromak volunteers to ride the monstrous creatures above to protect Krix.

Just as things get under way, Marchion Ro abruptly stops the show. Thinking quickly and having witnessed what it takes to survive the Nihil, Krix declares the binary transponder in question belongs to Elder Tromak. The explanation is good enough for Ro, who orders Tromak to be fed to the hungry creatures and summons Krix for a private meeting. Once away from the Nihil, Ro tells Krix he knows the transponder belongs to him and he’s impressed with how quickly the child betrayed Tromak for his own survival. There’s a problem, though. 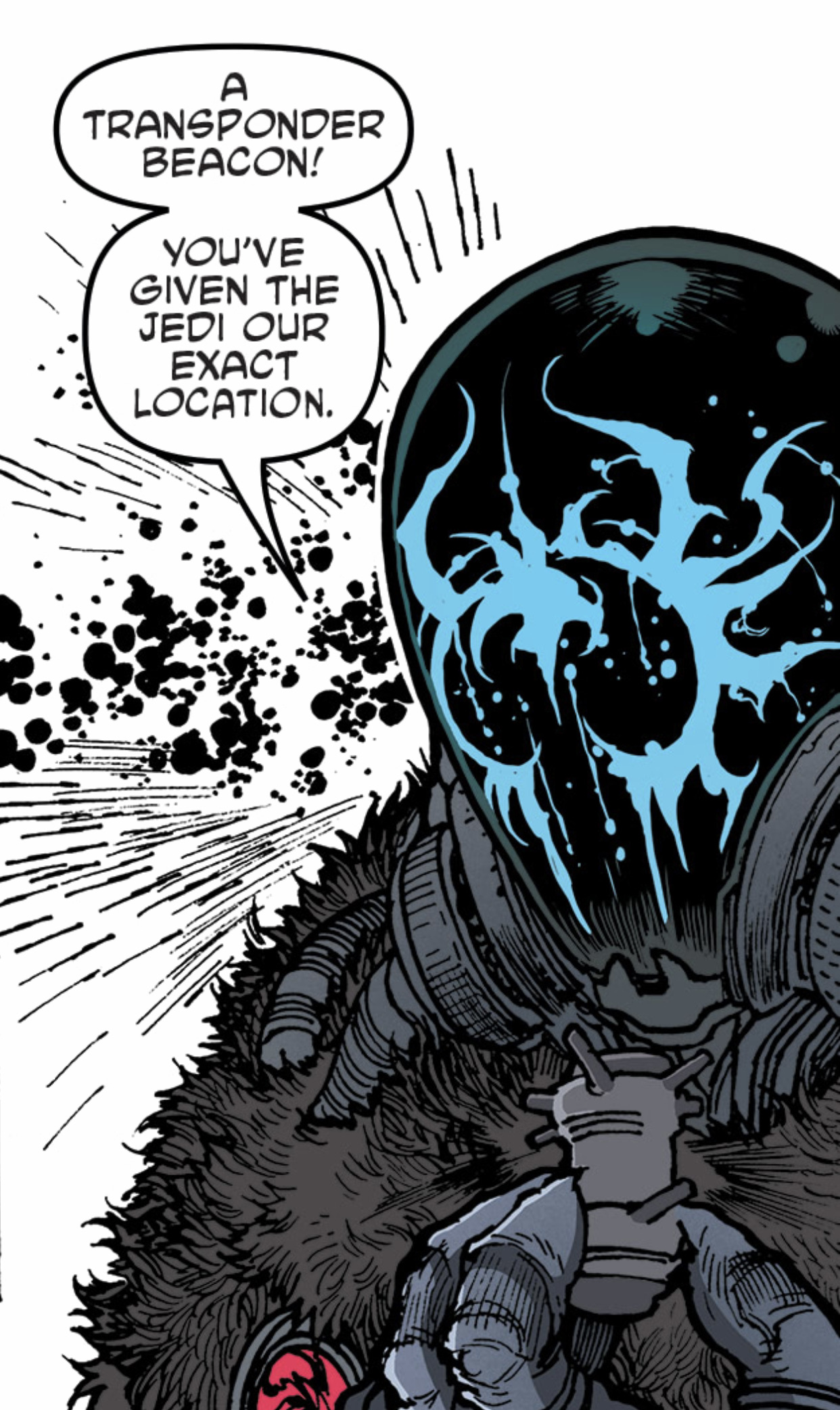 The transponder has a beacon which will lead the Jedi to the Nihil. Ro sees this as an opportunity and enlists Krix to help create a trap for the Jedi, leading them to a location the Nihil can ambush them. Krix agrees to help them, while on the other side of the galaxy, Zeen is faced with a similar decision. 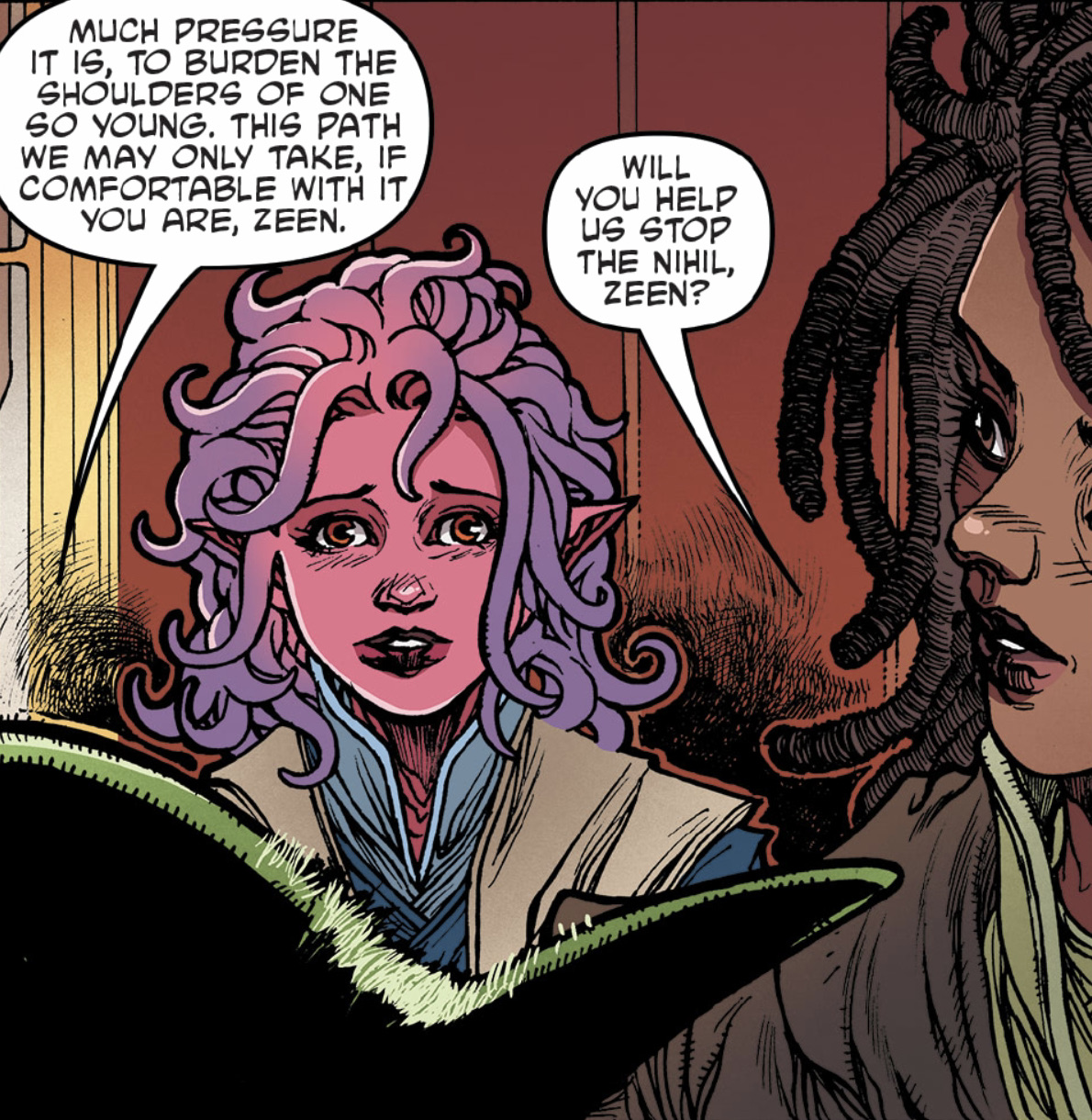 Zeen is asked to help the Jedi track down the Nihil. The transponder doesn’t have a strong enough range to give them an exact location, but Yoda and his ship of Padawans are ready to start looking. Yoda says the quiet part out loud, how unfair it is to put a child in this position. Older and artists Harvey Tolibao and Rebecca Nalty juxtapose this scene with Krix and the Nihil, letting us know it’s equivalently awful to put children in this position. Both the Nihil and the Jedi know they need the bond between Zeen and Krix to further their ambitions and they both seem to have no qualms about trying to manipulate each of them. Though the Jedi are a little more subtle and kind it will be interesting to see how Zeen feels when she realizes this. Krix, too. 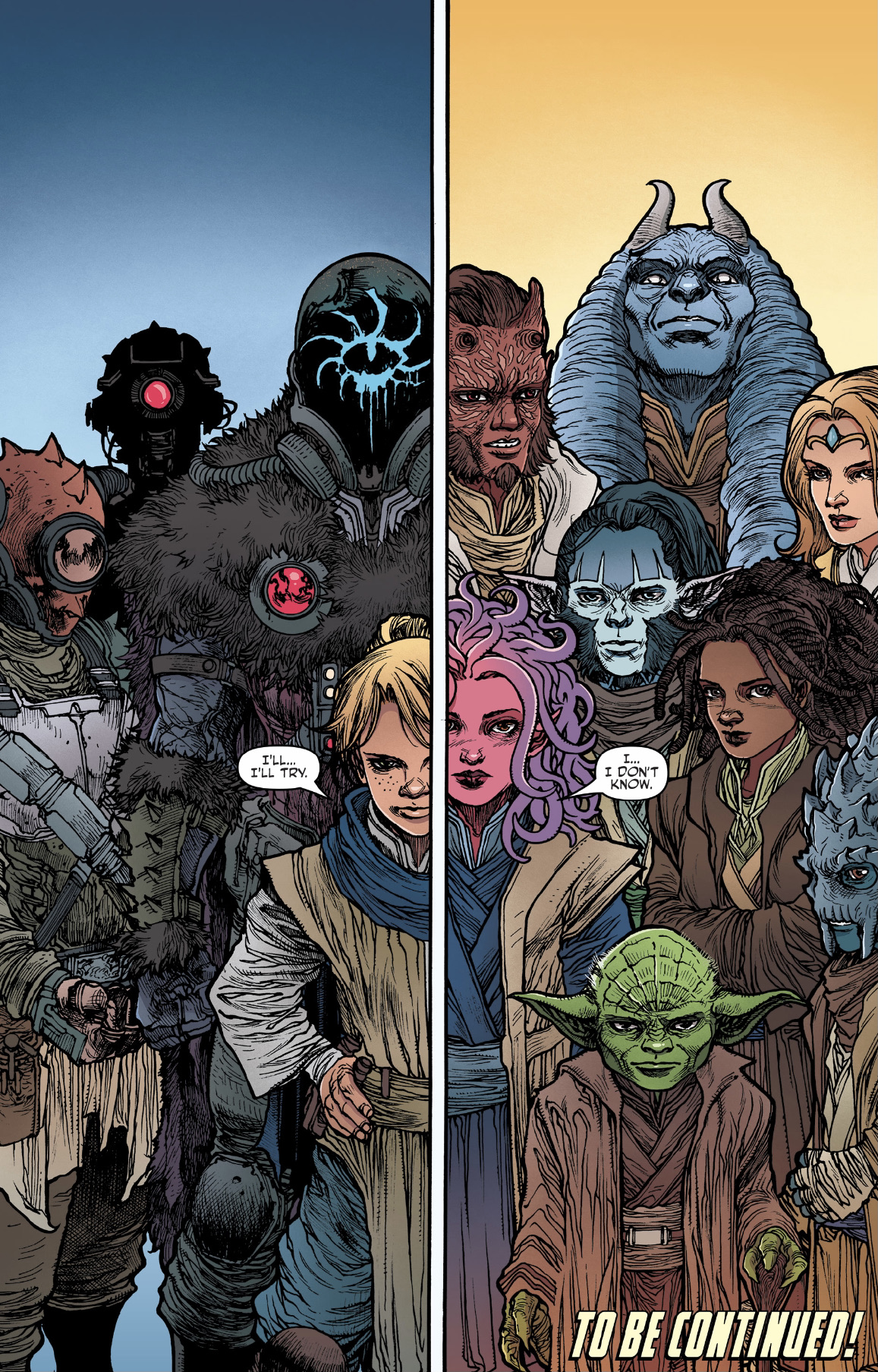 While it’s implied Krix is going to go along with it, there seems to be a shared uncertainty. However Krix and Zeen feel, the Jedi and the Nihil appear to be on a collision course. I’m nervous for both Krix and Zeen.

I’m loving this story so far. Each issue treats these characters with the respect and emotional weight not often afforded children in Star Wars. Neither of them are blindly embracing the greater organizations who scooped them up and seem to expect them to turn to their causes. Rather, Older allows these kids time to process the complicated feelings of grief, isolation, and loss. It’s all centered around the pure power of innocence and friendship – and what happens when both are lost. The art by Harvey Tolibao and Rebecca Nalty is so vibrant and aligned with Older’s writing it adds to the life of this story. I’m really looking forward to where this goes and the fate of these characters, in these books and the future of the High Republic. 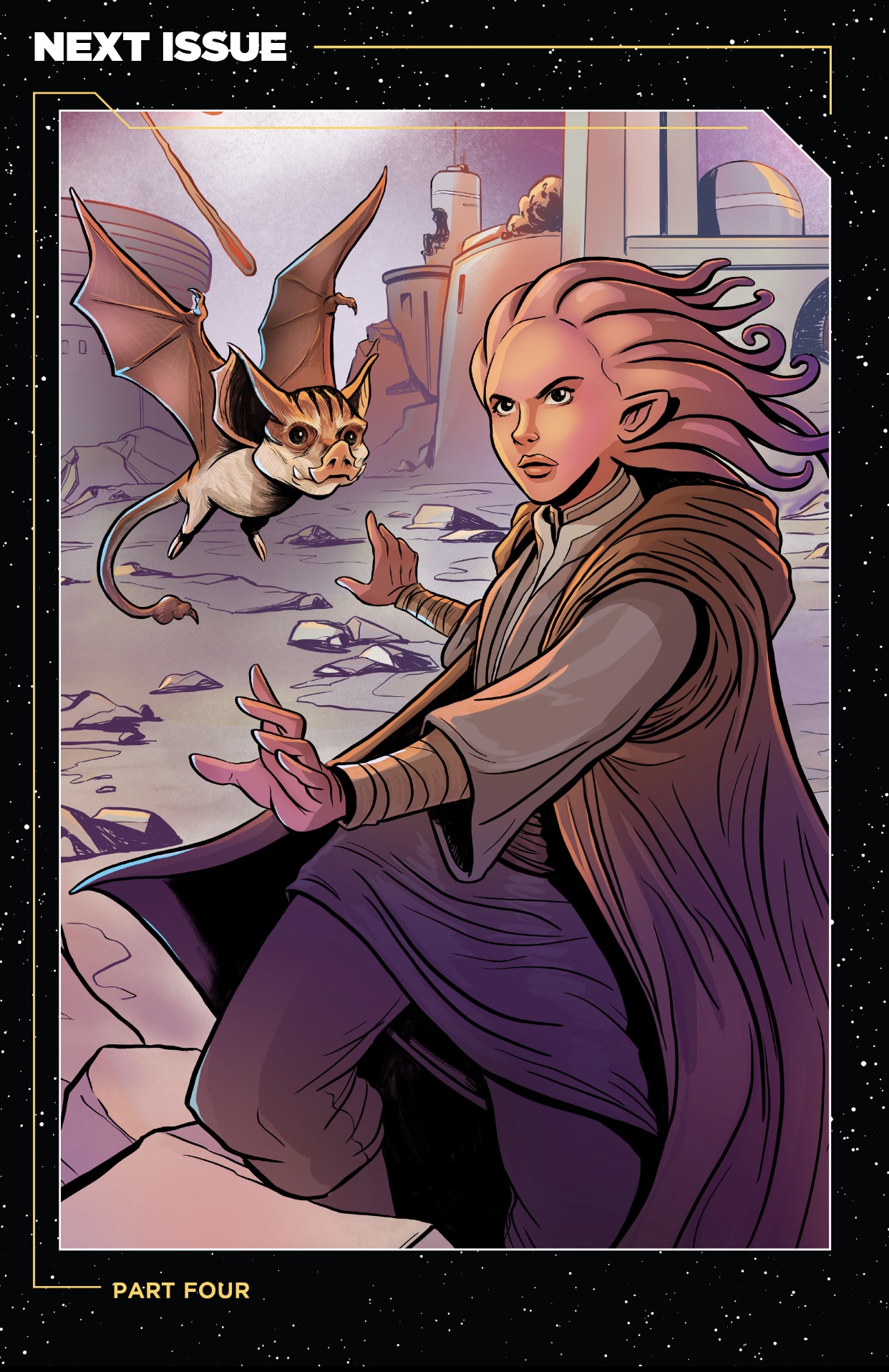