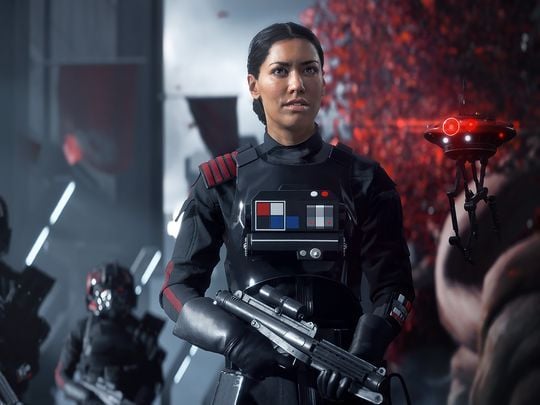 Janina Gavankar, best known by Star Wars fans for her role as Iden Versio in the story campaign for DICE’s Battlefront II, may be hinting that we’ll be seeing more of her and her fellow Inferno Squad teammates. Better yet, said hint implied that it will be set near or during the events of The Mandalorian, which is set after the majority of the game’s campaign.

The story of Battlefront II‘s campaign was shown through the eyes of a team of Imperial crack operatives, known as Inferno Squad, who initially formed after the destruction of the first Death Star. Their story begins on the surface of Endor, just as the second Death Star is obliterated. They rendezvous with the Empire and enact a series of missions to strike back against a triumphant Rebel Alliance, only to discover that the Empire has a plan to kill many of its own citizens. The team fractures between loyalists and defectors, and our protagonist, Iden Versio, becomes an unlikely champion of the Rebel Alliance as she participates in several battles, from saving the population of Naboo to participating in the Battle of Jakku. An epilogue campaign, showcasing what Inferno Squad was up to around the events of The Force Awakens and The Last Jedi, was released later. But what happens between those two points?

Janina Gavankar has just hinted that we’re about to find out. While talking to a fan about what happens to Iden Versio, she tagged both writers of Battlefront II‘s story, Mitch Dyer and Walt Williams (who returned to write the story for Squadrons), to ask permission to talk about what comes next. Check it out below:

Today, both Mitch Dyer and Walt Williams replied to her tweet and added fuel to the fire without explicitly confirming a continuation of Iden Versio’s story:

Whether you’re a Mandalorian or a Ranger, I can’t think of anyone better to have in your corner than Iden Versio. https://t.co/k0dlYVYz78

During the timeline of Mandalorian, Iden Versio is…

What might this mean? Hypothetically, this could be as simple as a proper appearance on The Mandalorian – after all, Janina Gavankar “appeared” in the third episode of the second season as a puppeteer for the Mon Calamari who tried to repair Din Djarin’s ship to the best of his ability, and she’s made it clear that she loves playing Versio. It could also just be a simple playful comment from her, since Williams is working on his novel and Dyer is not currently working for Electronic Arts… But there’s reason to believe otherwise. It’s not exactly a secret that Janina Gavankar and her Battlefront co-stars have been recently been recording for something together. While nothing is confirmed, it’s been speculated they are doing motion-capture for some kind of Battlefront spin-off project, which would certainly make sense if the rumors that Electronic Arts are working on a new Star Wars game are accurate. For now, treat this as a rumor of sorts from someone who would be very much in-the-know about it.