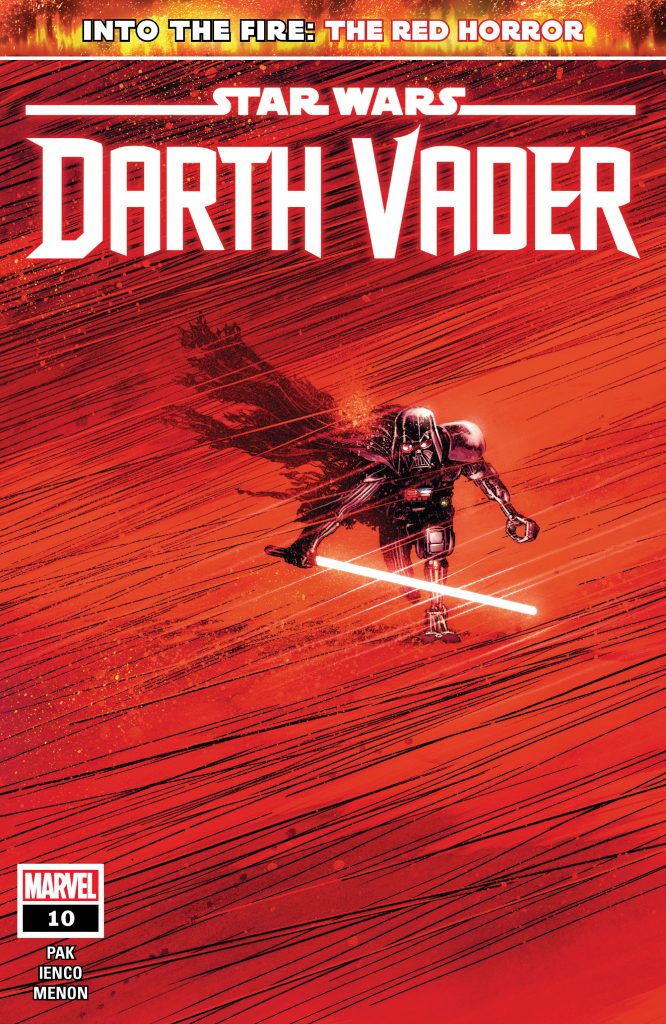 Vader Continues his journey to Exegol in the face of insurmountable odds in the newest issue of Greg Pak’s Darth Vader series.

His insubordination in the series’ early issues has led to the Emperor punishing him, leaving him for dead on Mustafar. He rebuilt himself, fought the Sith assassin Ochi of Bestoon, and wants answers to his master’s plan. Now, he finds himself with a wayfinder on a journey to Exegol, but it won’t be that easy, as a space faring creature stands between Vader and his goal. 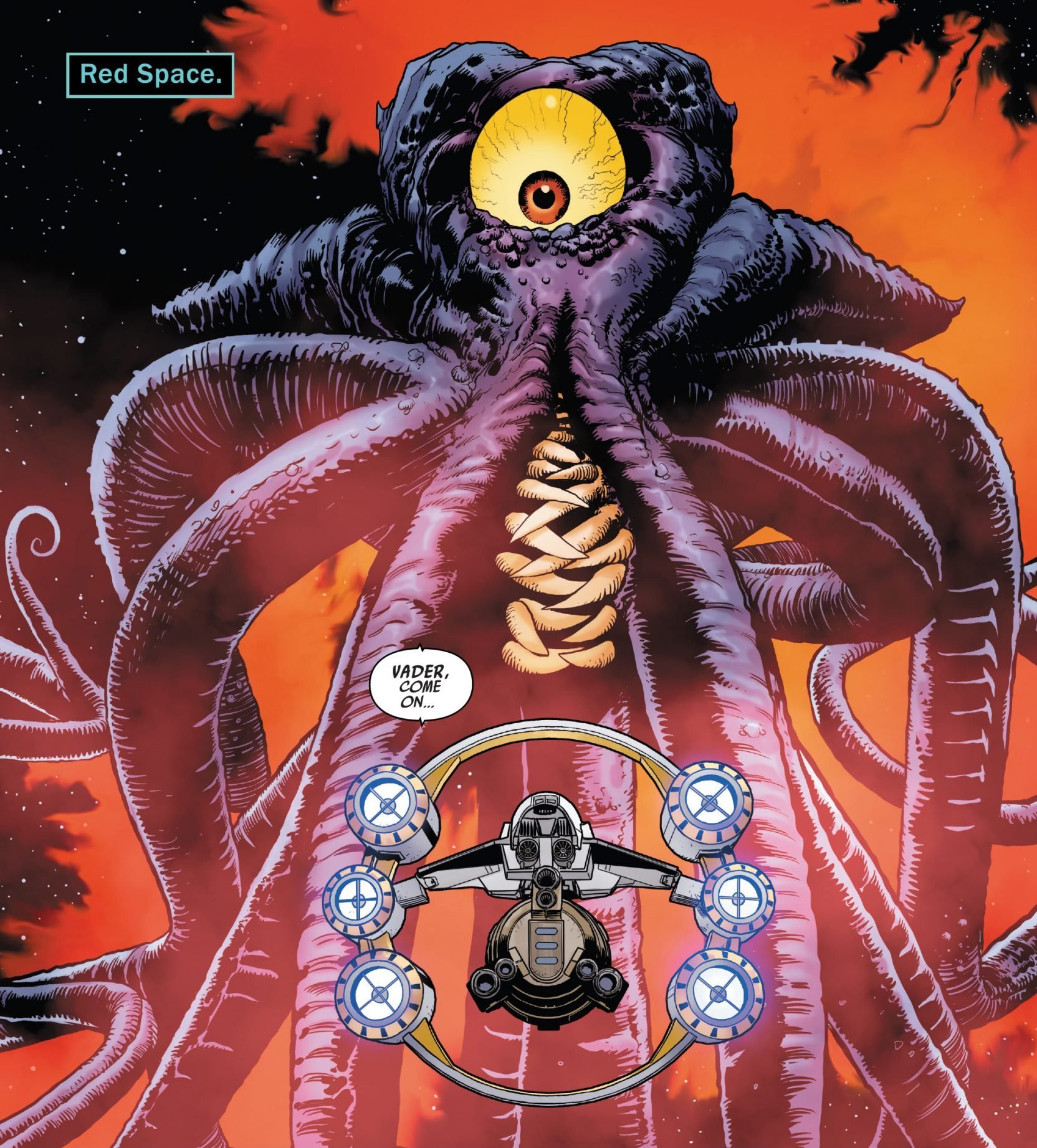 Vader and Ochi stare down an unidentified behemoth that stands between them and Exegol. That problem will have to wait, as an Imperial armada of three Star Destroyers appears behind them.  Led by Sly Moore, the Umbaran we briefly saw in issue #8, they have been tasked with completing Ochi’s mission, to destroy Vader.

Quick side note: Sly Moore is a character who has appeared in the films but hasn’t been particularly utilised in the new canon, until now. She’s a ruthless chief of staff and more than just a political pawn of the Emperor or part of his entourage. If you’re having trouble placing her (which I did) the image below will instantly remind you!

Rather than wait for the cannons to destroy Vader, she decides to release a squadrons of TIE Fighters. In some great artwork, Vader destroys them in his old Jedi fighter with an escape pod, containing Ochi, attached to the bottom. 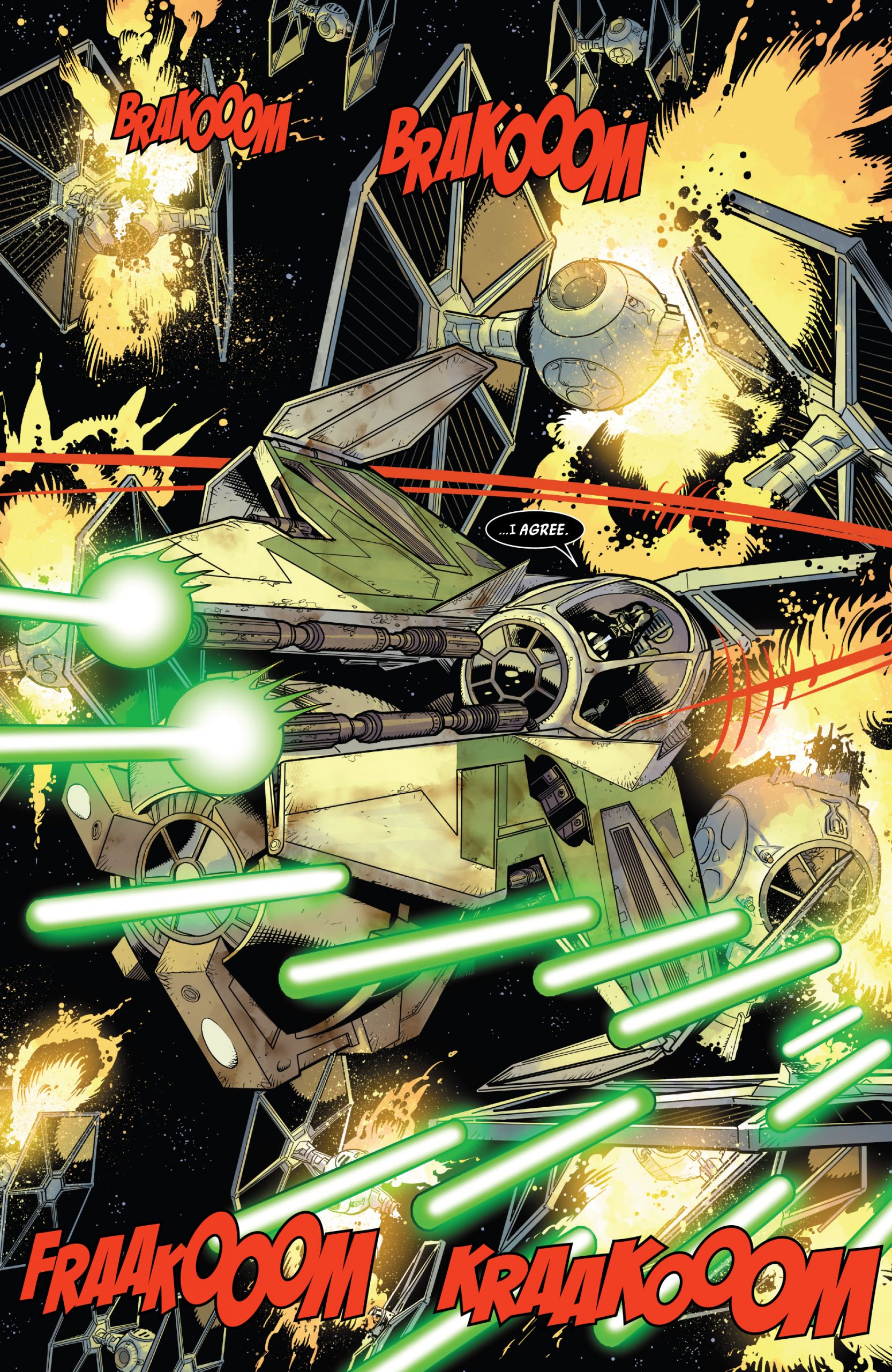 Moore is unfazed by the deaths and dispatches the hundreds of fighters aboard the Star Destroyers simultaneously. Vader, being the master tactician, flies towards the gigantic beast, leaving it’s large tentacles to destroy the pursuing fighters as he evades. 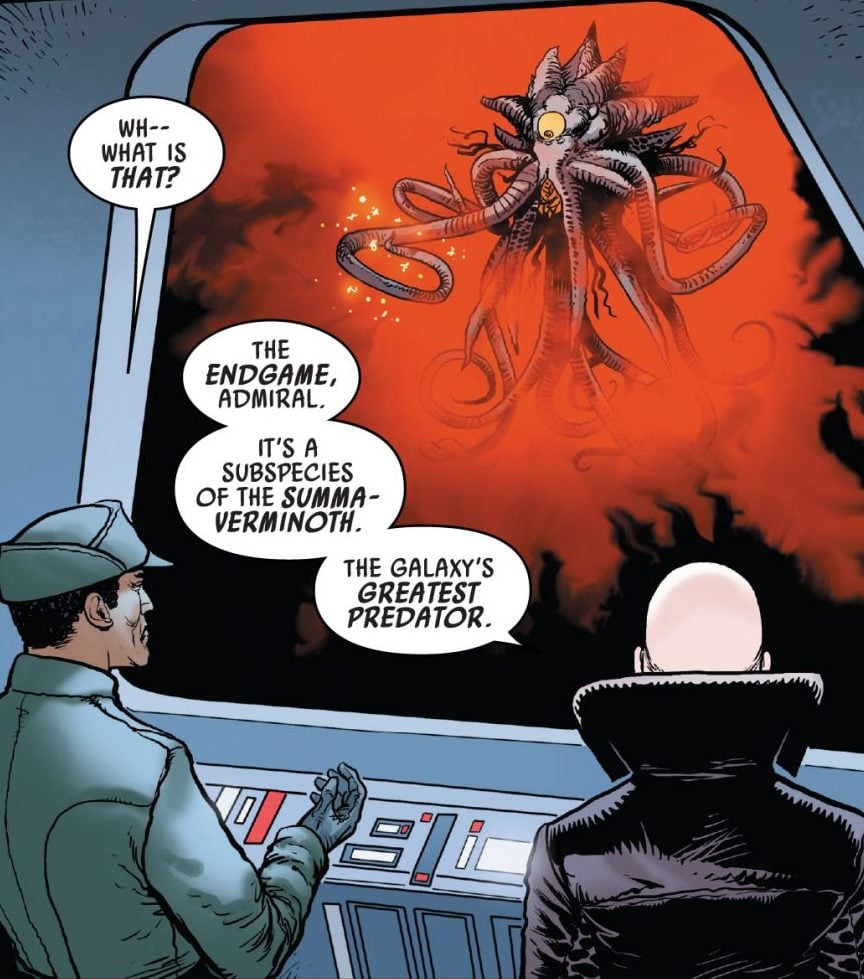 This series has embraced the weirder parts of Star Wars, between the Eye of Webbish Bog with it’s form changing giant face and now this massive space octopus floating in the void. That can sometimes be a bit hard to mentally align with the more ‘grounded’ films. The above panel is an amazing piece of writing that makes this galaxy feel connected, while also reminding us (and me) that the films aren’t as grounded as we might think. The Summa-Verminoth is the gigantic creature from Solo that the Millenium Falcon tangles with during the Kessel Run. We’ve already seen a massive space octopus in the films, so what’s about to happen isn’t that much of a stretch.

This sub-species has developed a method of hunting ‘so its attacks transcend the merely physical’. Vader has defeated the Tie Fighters and lost the Empire’s pursuit, but as he and Ochi go past the creature, the red mist starts seep in and reality disappears. 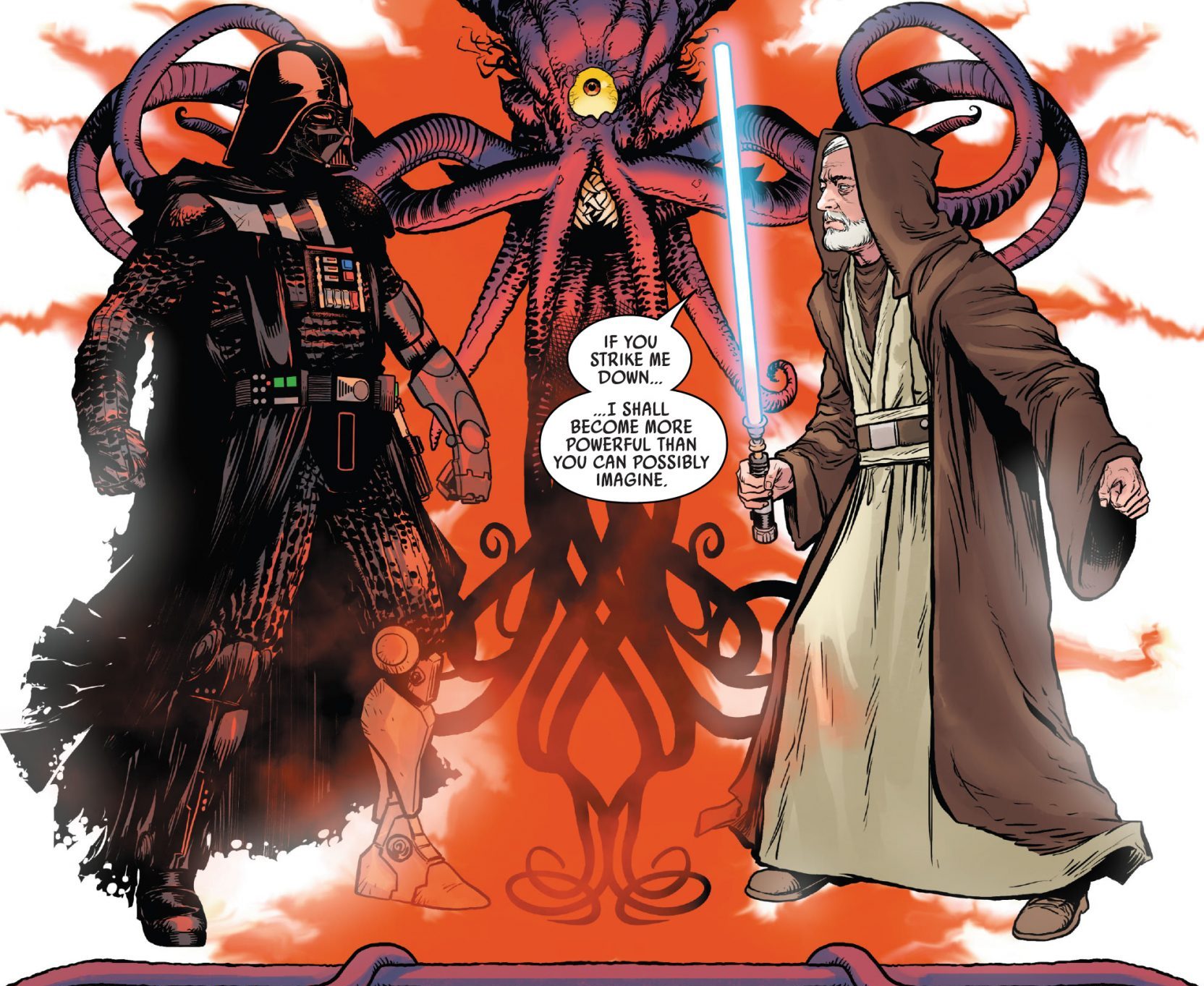 Vader strikes down Obi-Wan again, not fooled by the visions of his old master. However, the visions continue, as parallels are made, between his fight with his former master in Revenge of the Sith and the fight with Luke in The Empire Strikes Back. 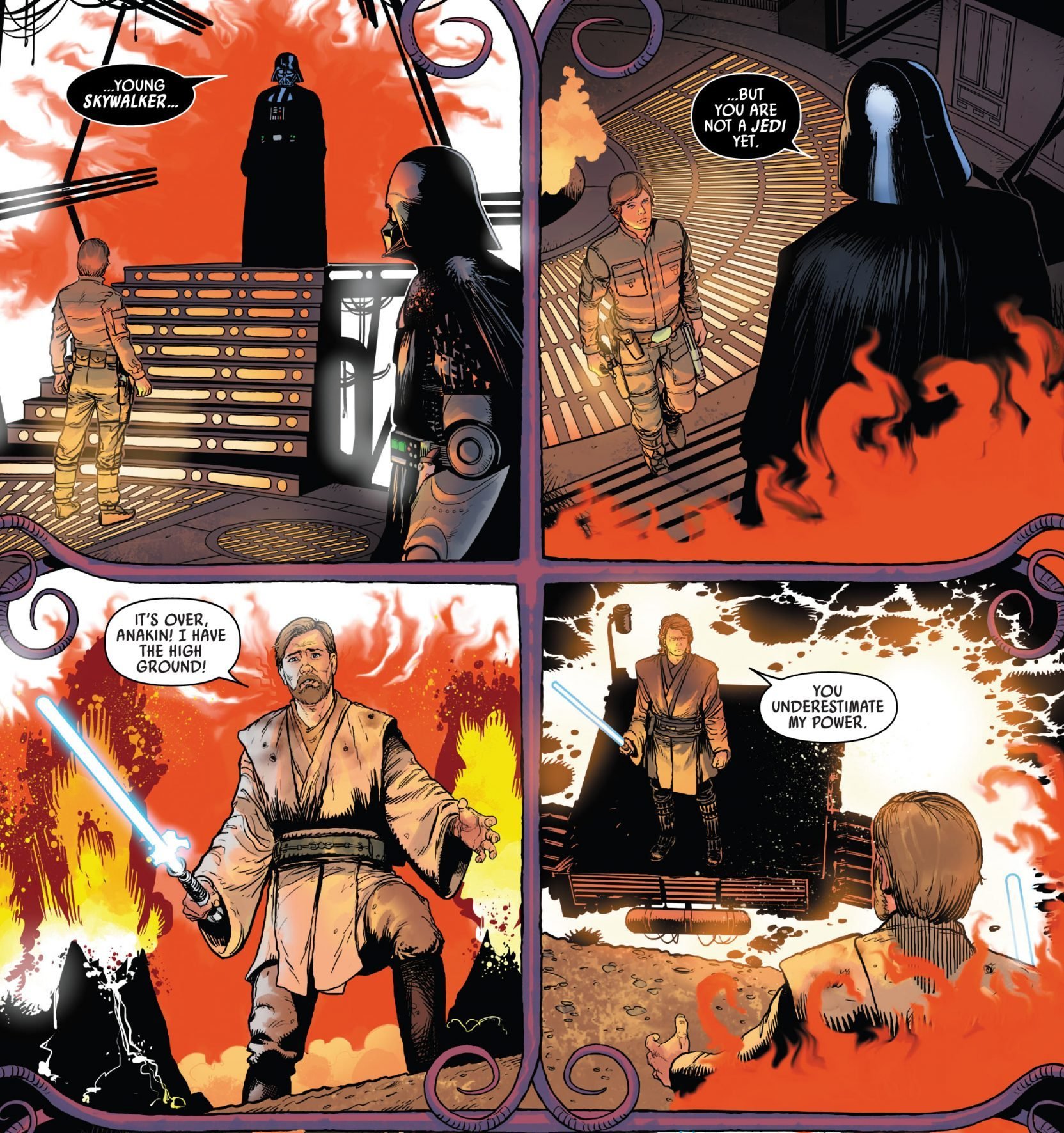 Vader had the high ground, thought the person challenging him was foolish to do so, and then dismembered them, just as Obi-Wan had done to him on Mustafar. The vision shows him what could have happened on Cloud City if Luke had gained the upper hand (literally). Vader gives the same speech he gave before, but this time he lies handless on the floor as Luke looms over him. He gives his speech about Luke being his son, the only person who can defeat the Emperor, and as he asks his son to join him he is silenced by the lightsaber that once belonged to Anakin Skywalker. 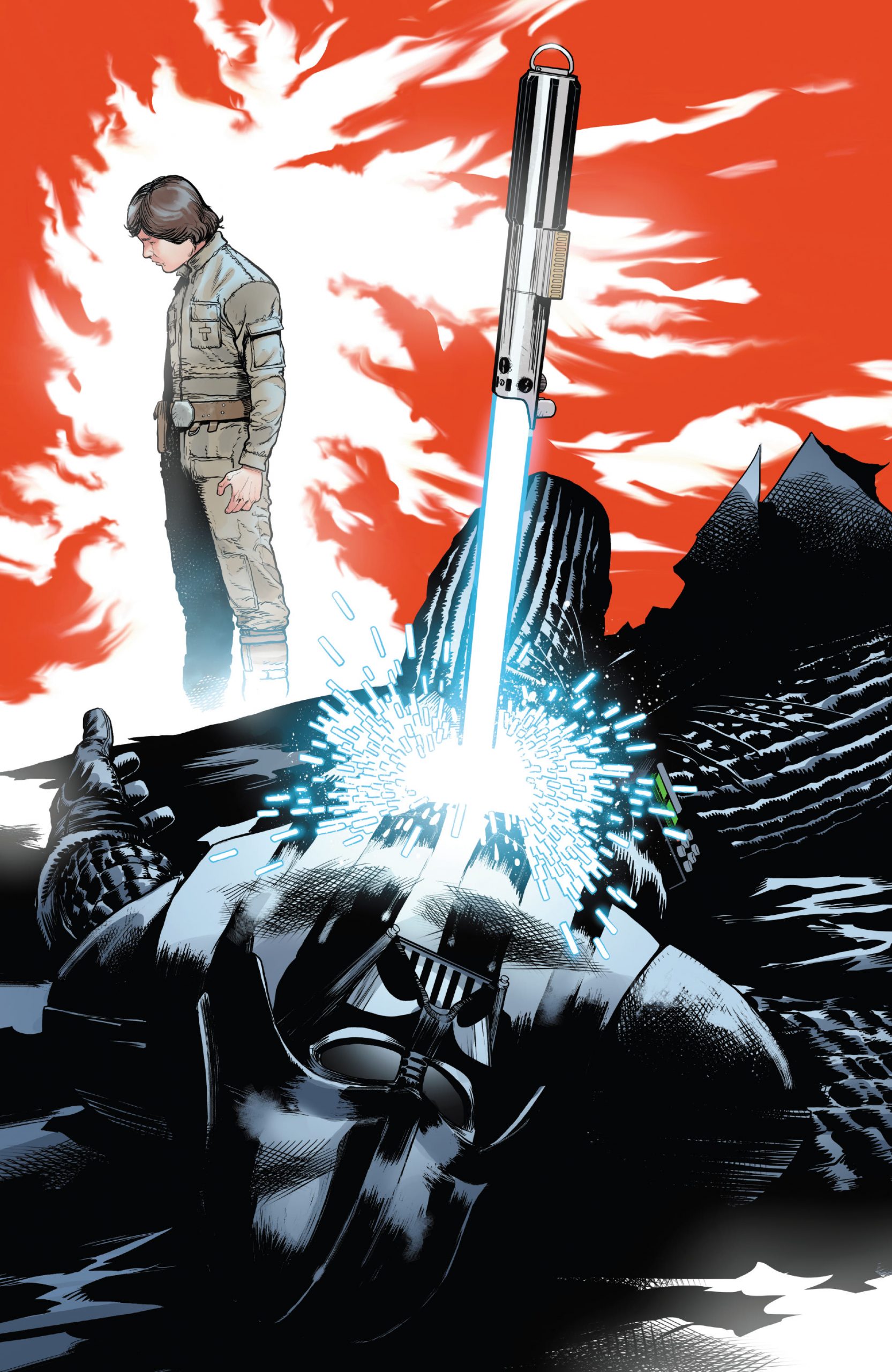 The ship exits the red fog and plummets towards Exegol, crashing into the planet.  Vader and Ochi crawl out of the wreckage, Ochi shaken by the fact that he saw how he would die (it would be interesting to know if he saw the truth, that he would get stuck under the sinking sands of Pasana and be unable to escape).

The beast has followed them to the planet and looms over them. Vader begins to tame the beast with the force, using it for the first time in a few issues, directly disobeying the orders of the Emperor. Vader claims his master can try to kill him for his insubordination and fill him with fear, ‘but fear leads to anger, anger leads to hate, and hate leads to power’. 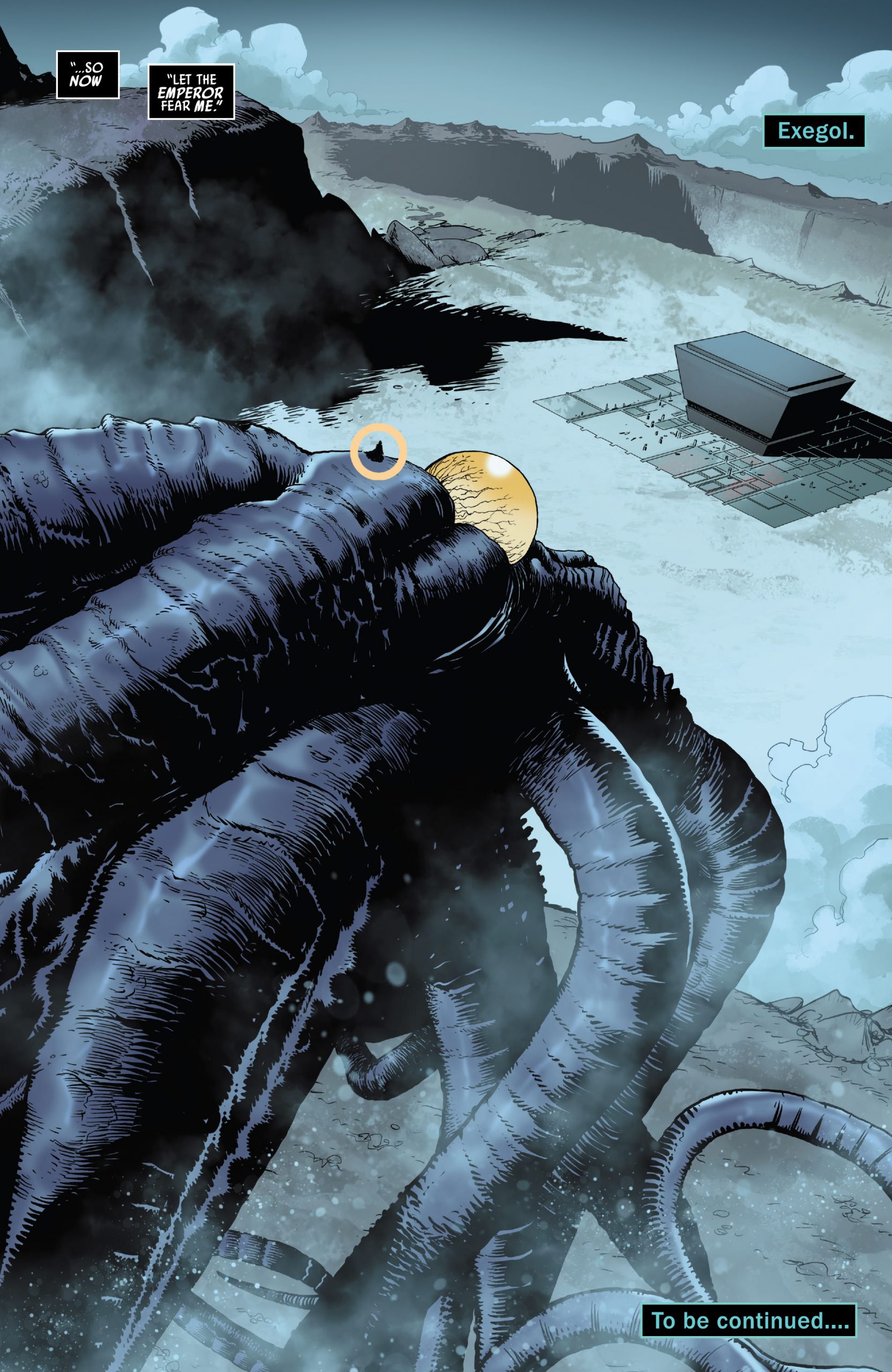 The final page sees Vader riding the beast as he approaches the Sith temple that will eventually become the location of Palpatine’s revival and the battle between the Final Order and the Resistance in The Rise of Skywalker.

This arc has been a rollercoaster and I love its ambition and scope. Hopefully we get some really interesting revelations next issue as we finally explore Exegol.

My only big issue was the use of the visions. While I think the message was interesting (him doing to Luke what Obi-Wan had done to him, what would happen to Vader if Luke joined the Emperor) the ‘Vader has a vision” trope is one we’ve seen multiple times in Darth Vader series’. I usually love them, and it is the most visually interesting way to explore the thoughts and feelings of a man who is isolated and barely speaks, but here the art and ambition doesn’t quite justify the use of it again. It isn’t bad by any means, but isn’t as revelatory as maybe it aimed to be.

That criticism aside, even if this was maybe the weakest issue of the arc so far, it’s still an interesting part of the story as a whole. Ochi, while it makes you question how he became a deadly Sith assassin, provides interesting commentary to otherwise silent dogfights, and the connective tissue is amazing. We have a story set during the original trilogy incorporating characters from the prequels, sequels and even links with Solo.

Vader now rides a beast into battle demanding answers, it’s going to be interesting to see how the Emperor reels him in again for Return of the Jedi. 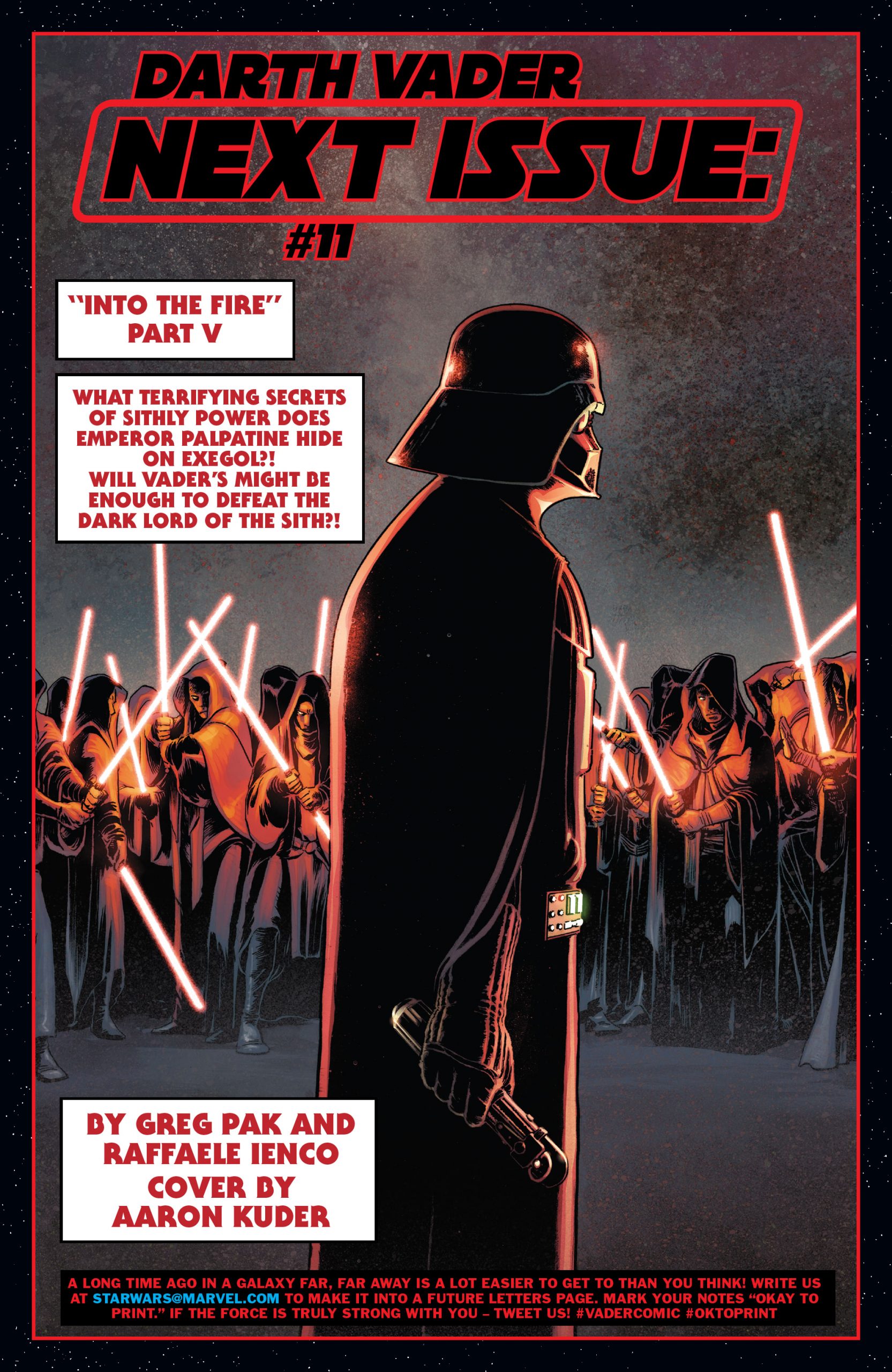