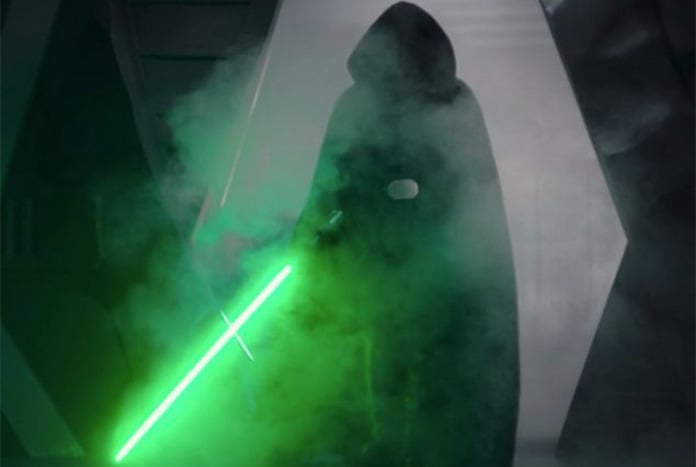 Nielsen’s latest batch of ratings indicate that Star Wars: The Mandalorian has just made history when it comes to tracking the performance of streaming television series. While the top spot has always been for a Netflix-produced or Netflix-hosted program, the second season finale of the Disney+ series is the first to take the #1 ratings spot away from the streaming giant.

The latest numbers report from The Hollywood Reporter has indicated that Peyton Reed’s crowd-pleasing season finale, featuring an unexpected and entirely welcome appearance from Luke Skywalker in his prime, helped push The Mandalorian to become the most-watched streaming television series in the week that it premiered. Not only that, but it was the most-watched show period at 1.34 billion minutes streamed from the 16 episodes that have currently been released. In previous weeks, The Office usually took the top spot due to its length (201 episodes); furthermore, there was an increased interest in this series before it left Netflix for Peacock, a newer streaming service with fewer subscribers. However, it came in at a close second with 1.31 billion minutes streamed in a week. In other words, the average episode of The Mandalorian was watched many more times than the average episode of a series with a backlog of hundreds of episodes. That’s no small feat for a streaming service with less than half of Netflix’s subscriber base! Quite a finish to a show that’s been in the top ten for all eight weeks that had new episodes.

That 1.34 billion minutes figure nearly doubles the third most-watched show of the period measured, The Crown, which is currently 40 episodes and had 772 million minutes streamed in the week observed. Unlike The Office and like The Mandalorian, The Crown is a streaming original, so that’s a pretty big gap compared to the two shows on top. It’s still worth noting that in spite of Disney+’s major accomplishment, Netflix retained the remaining nine spots on the most-viewed shows; though of those, only Virgin River and the movie A California Christmas (the seventh-most watched and tenth-most watched offerings on the list) were also originals, while the remaining series (Grey’s Anatomy, Manhunt: Deadly Games, Supernatural, Criminal Minds, and Schitt’s Creek) were shows licensed out to Netflix. Disney+ wasn’t created specifically as a Netflix competitor, but the rate that it’s grown has made it the third-biggest streaming service from an English-speaking country in a little over a year. In the coming weeks, we’ll just have to wait a few weeks to see if WandaVision can make a similar impact to The Mandalorian on Nielsen’s charts.

The first two seasons of The Mandalorian are available to stream on Disney+, with a third ordered and expected to arrive in 2022. The spin-off The Book of Boba Fett is stated by Lucasfilm to arrive in December 2021. Two other spin-offs, Ahsoka and Rangers of the New Republic, are in development for unspecified release dates.