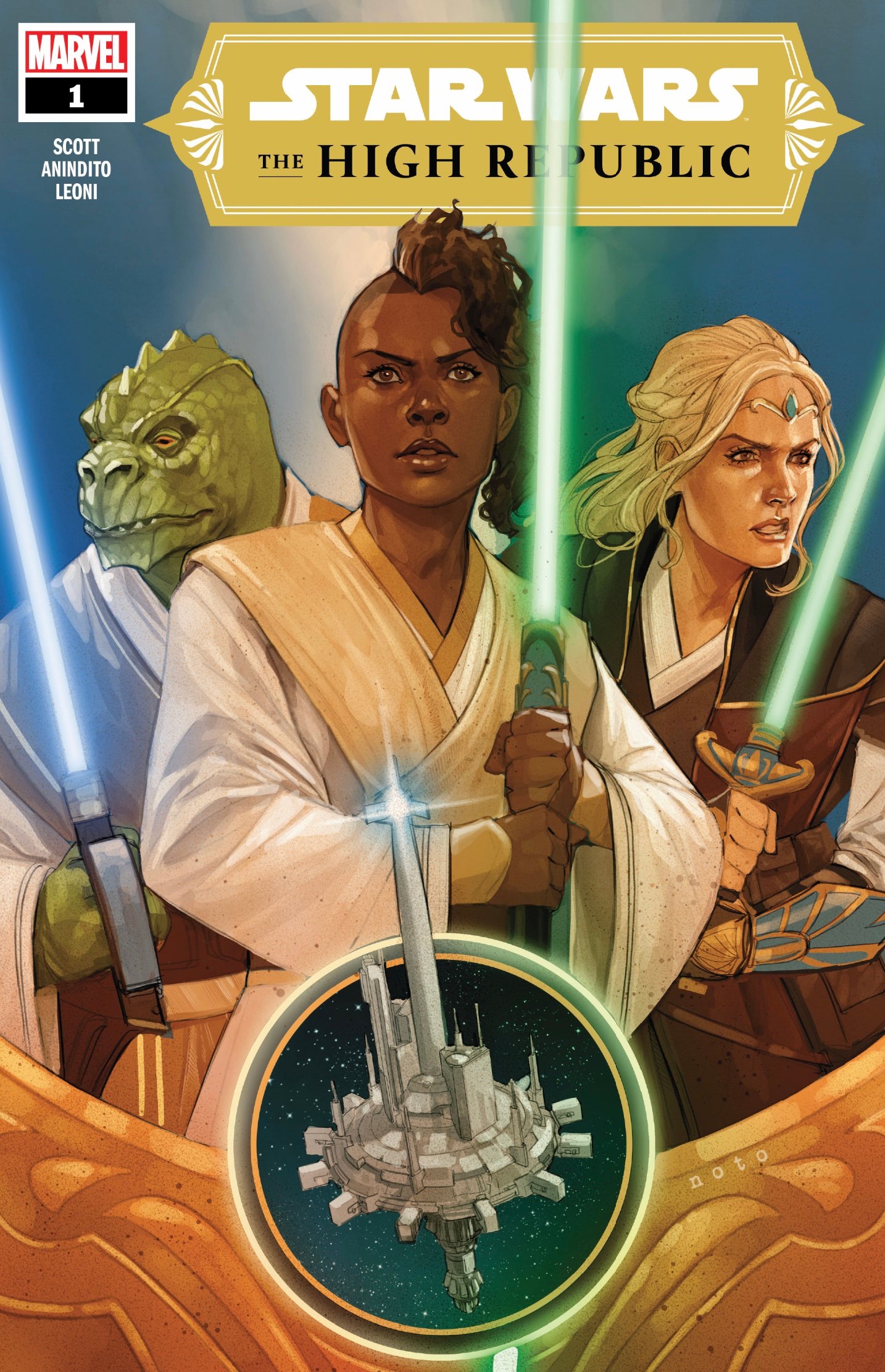 The High Republic is here! And we have our first comic, from writer Cavan Scott (Dooku: Jedi Lost, Star Wars Adventures)! Before we jump in, this story takes place roughly the same time as the first three High Republic novels: Light of the Jedi, A Test of Courage, and the forthcoming Into the Dark. Wouldn’t be a bad idea to at least read Light of the Jedi before diving into this, as a few events are referenced and would be spoiled if you haven’t read the book. That said, we’re jumping into the comic so you know the drill, SPOILERS AHEAD…. 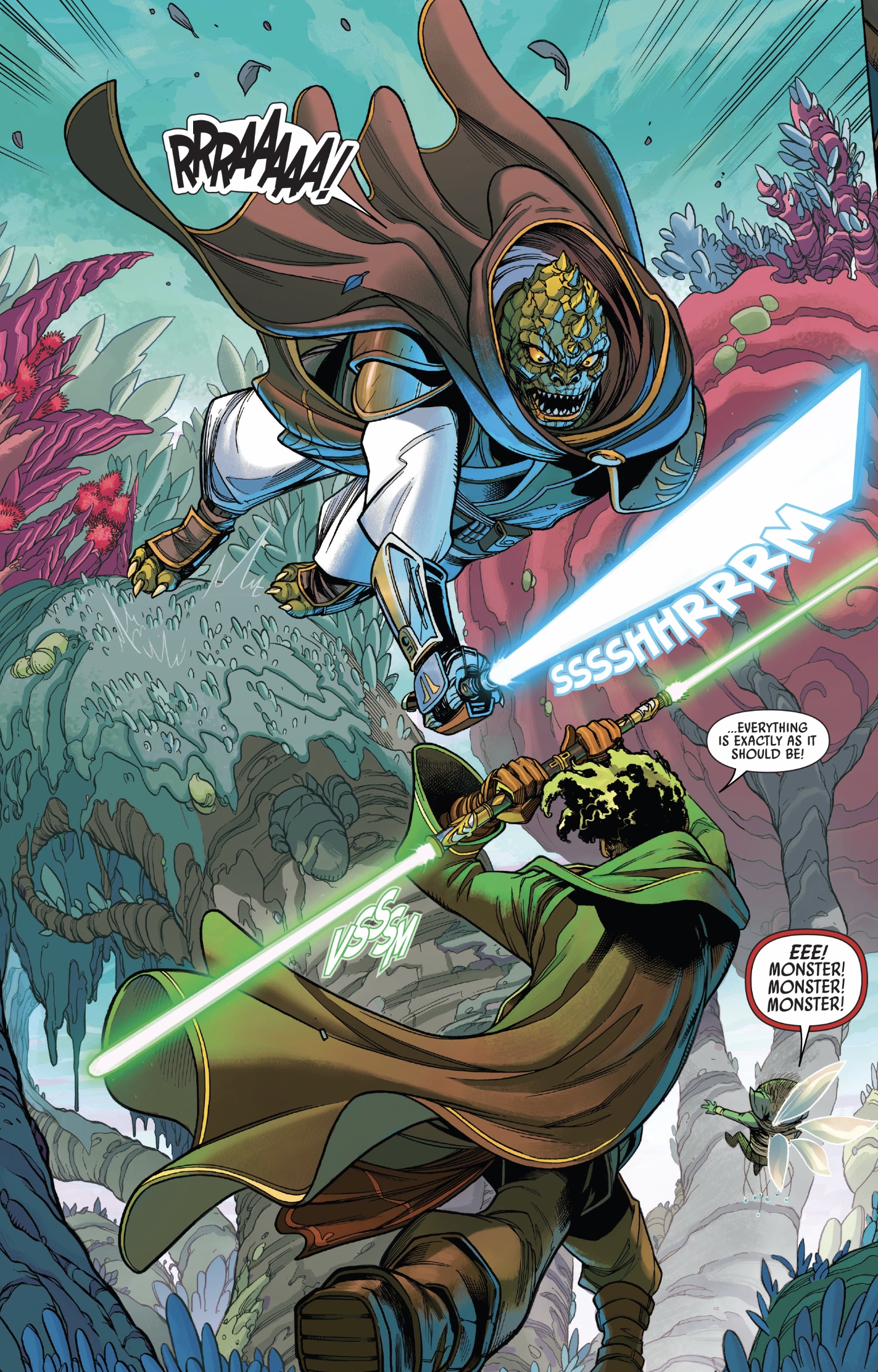 First of all, after reading the books, I can’t tell you how freaking cool it is to finally see some of these characters. Marvel brought on the trio of Ario Anindito, inker Mark Morales, and colorist Annalisa Leoni, who bring this to life with exuberance. We meet padawan Keeve Trennis and her master, Jedi Sskeer, during a training exercise. They are on the planet Shuraden, at the frontier of the Republic. We learn, along with Keeve, this is more than a training exercise–these are her Jedi trials. 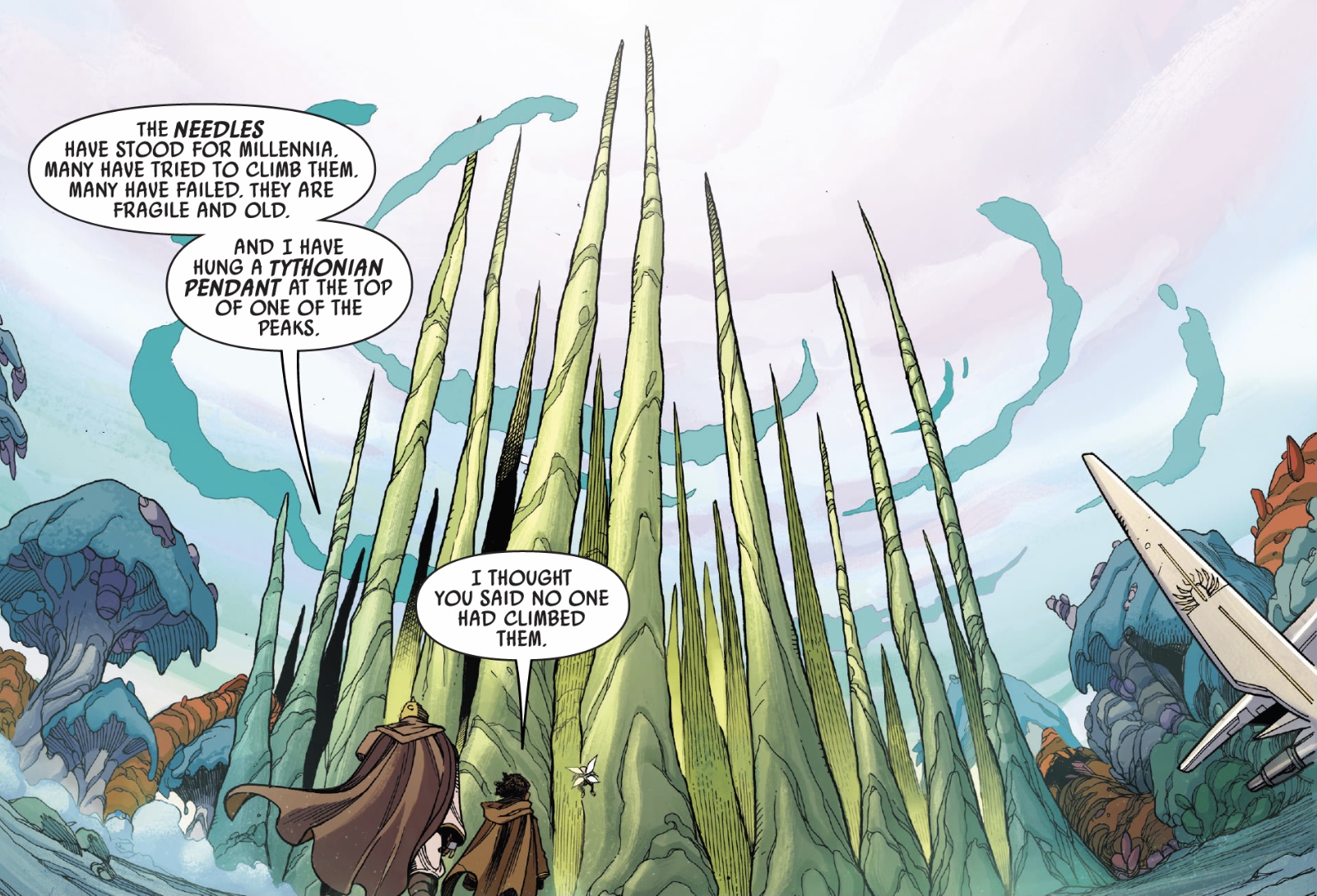 Sskeers test for Keeve: Climb to the top of the “Needles”, a task few have accomplished, to retrieve a Tythonian pendant. In this era of the galaxy, the Jedi have mantras they often repeat before using the Force. Sskeer instills confidence in his padawan by reassuring her she’s capable. The narrow, sharp protrusions snap easily, forcing Keeve to leap between them. She’s made a new friend, local Kanri, a fairy-like creature who flies alongside her and provides encouragement. It’s both very weird and very Star Wars and I love it. As Keeve continues to climb for the pendant, she senses trouble. 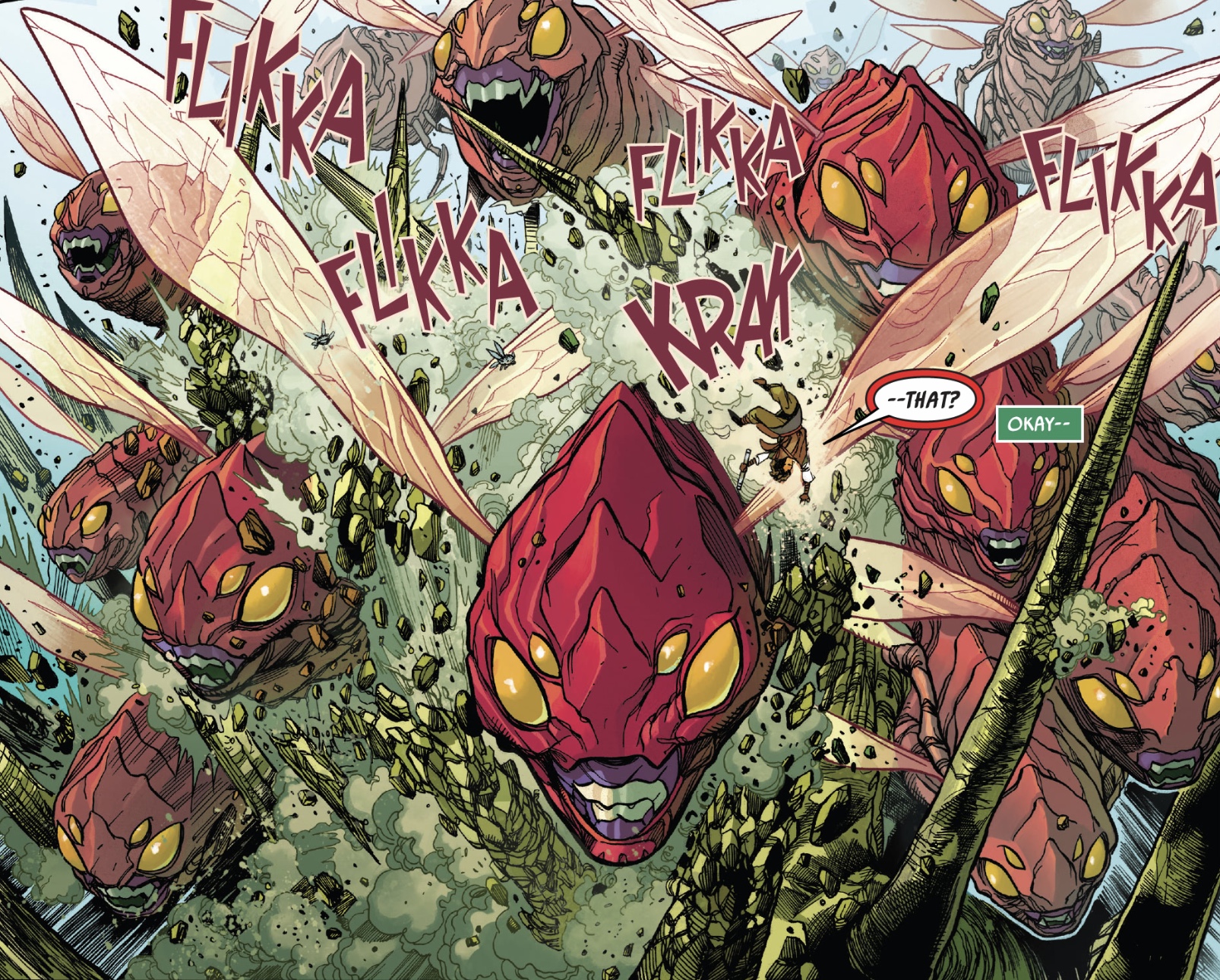 Whatever these are, they don’t look good. 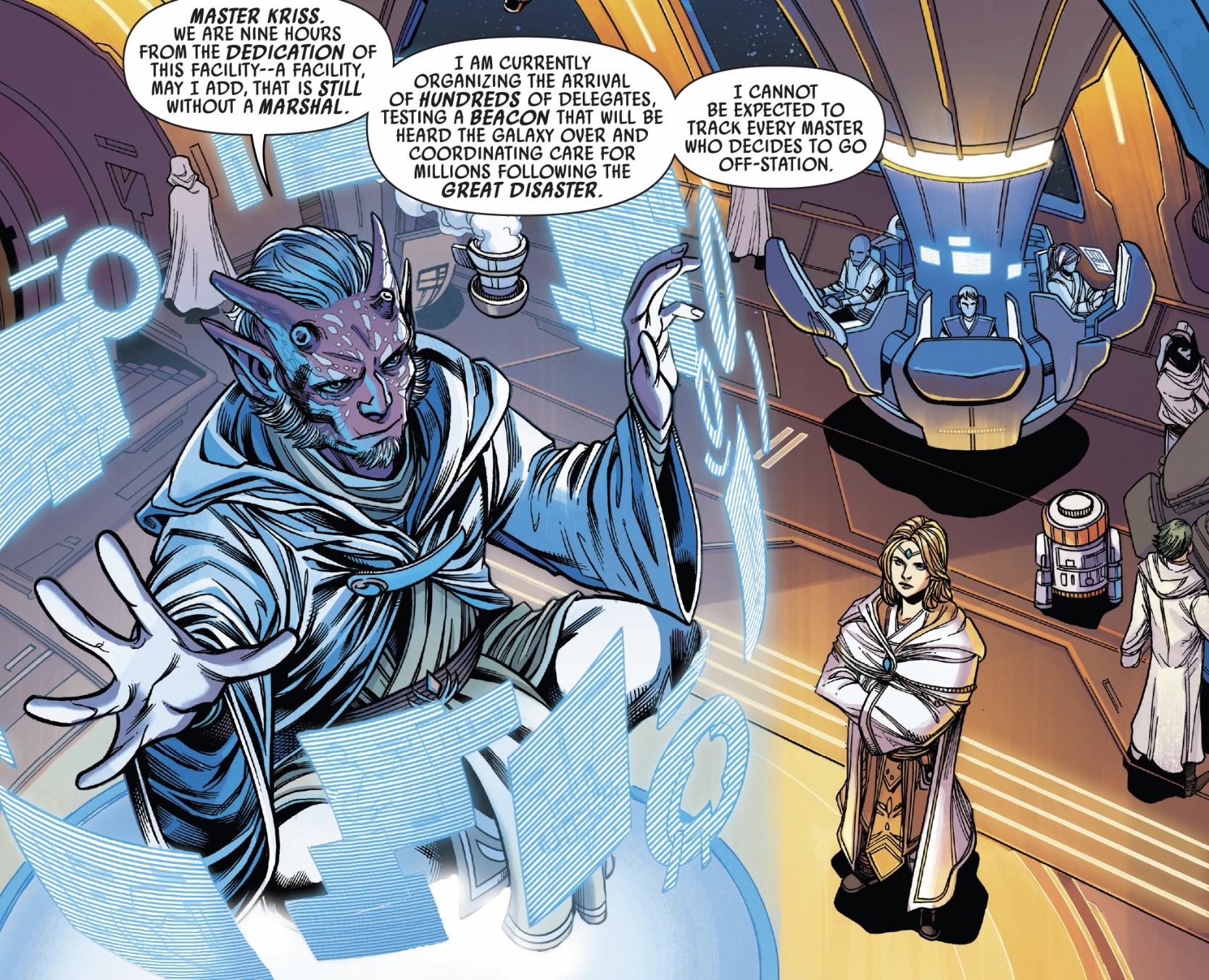 Meanwhile, at Starlight Beacon (the joint Republic and Jedi outpost established as a waypoint in the Outer Rim), Avar Kriss is concerned about Sskeer. She’s asked Master Maru to search for them. Sskeer suffered the loss of an arm and a fellow Jedi at the Great Disaster (a hyperspace accident detailed in Light of the Jedi). Kriss is especially gifted at creating Force-bonds between Jedi. If she can’t sense him then she assumes something is very wrong. She’s puzzled because it’s almost like Sskeer is absent from the Force.

Grandmasters Veter and Yoda arrive at Starlight Beacon. Yoda is barely in these new stories so it’s nice to see a familiar face. He’s been shepherding a ship filled with younglings around the galaxy, exploring. They’ve come to Starlight Beacon to make Avar Kriss the marshal of the station. This is something we learn in Light of the Jedi, but the promotion takes place off-page, so it’s cool to see. Avar is also one of the main characters in Light of the Jedi and I’m excited we’ll be learning more about her in her new role aboard this station. The joint effort between the Republic and the Jedi is a BIG deal, with the Jedi even going so far as to establish a temple on the station. 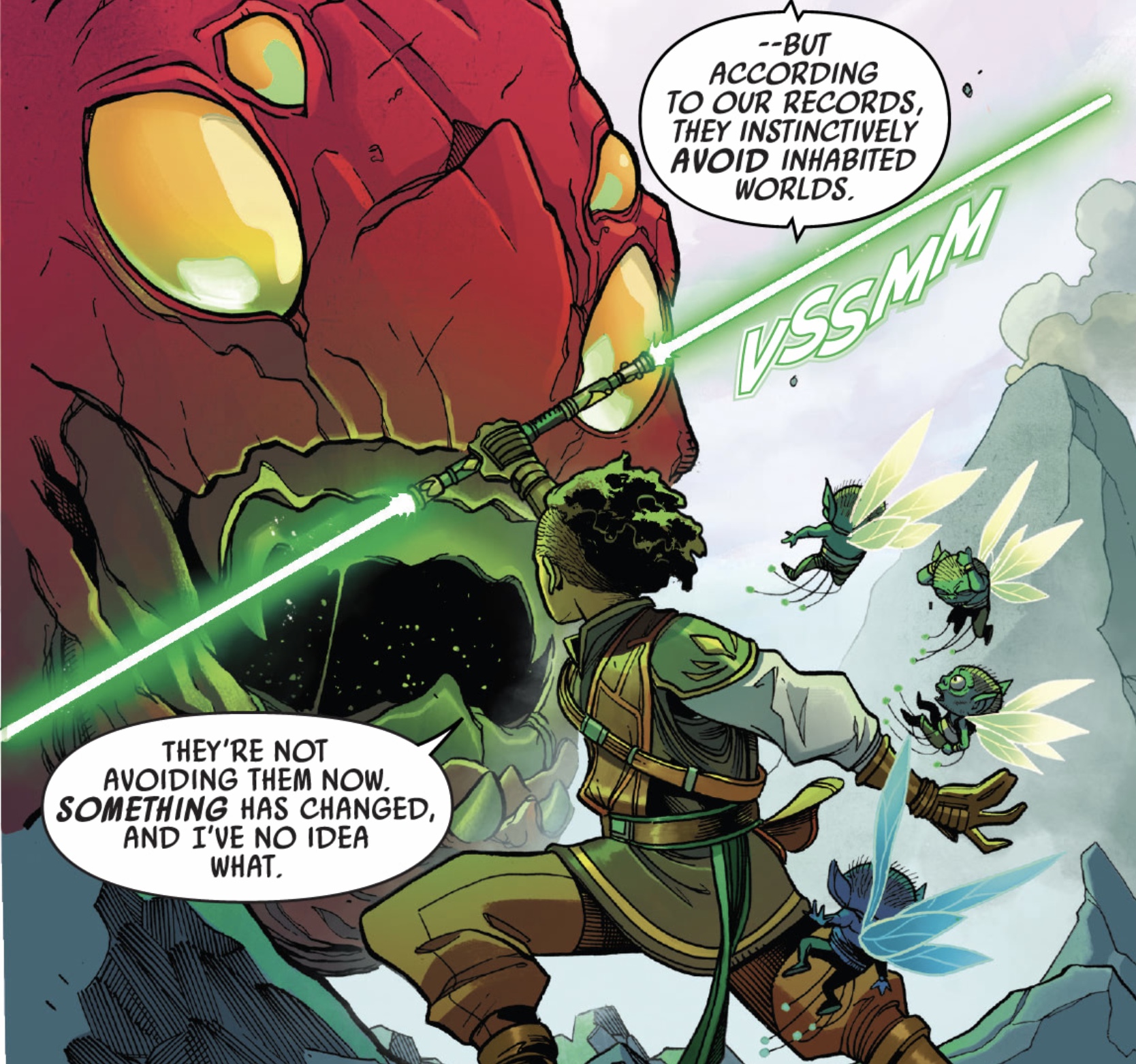 Keeve makes contact with Master Maru, while leaving Sskeer behind because she’s concerned they are headed for a city. Maru is puzzled why the creatures would be anywhere near an inhabited world. And they don’t seem to be affected by her lightsaber, so she attempts to commune with them through the Force. 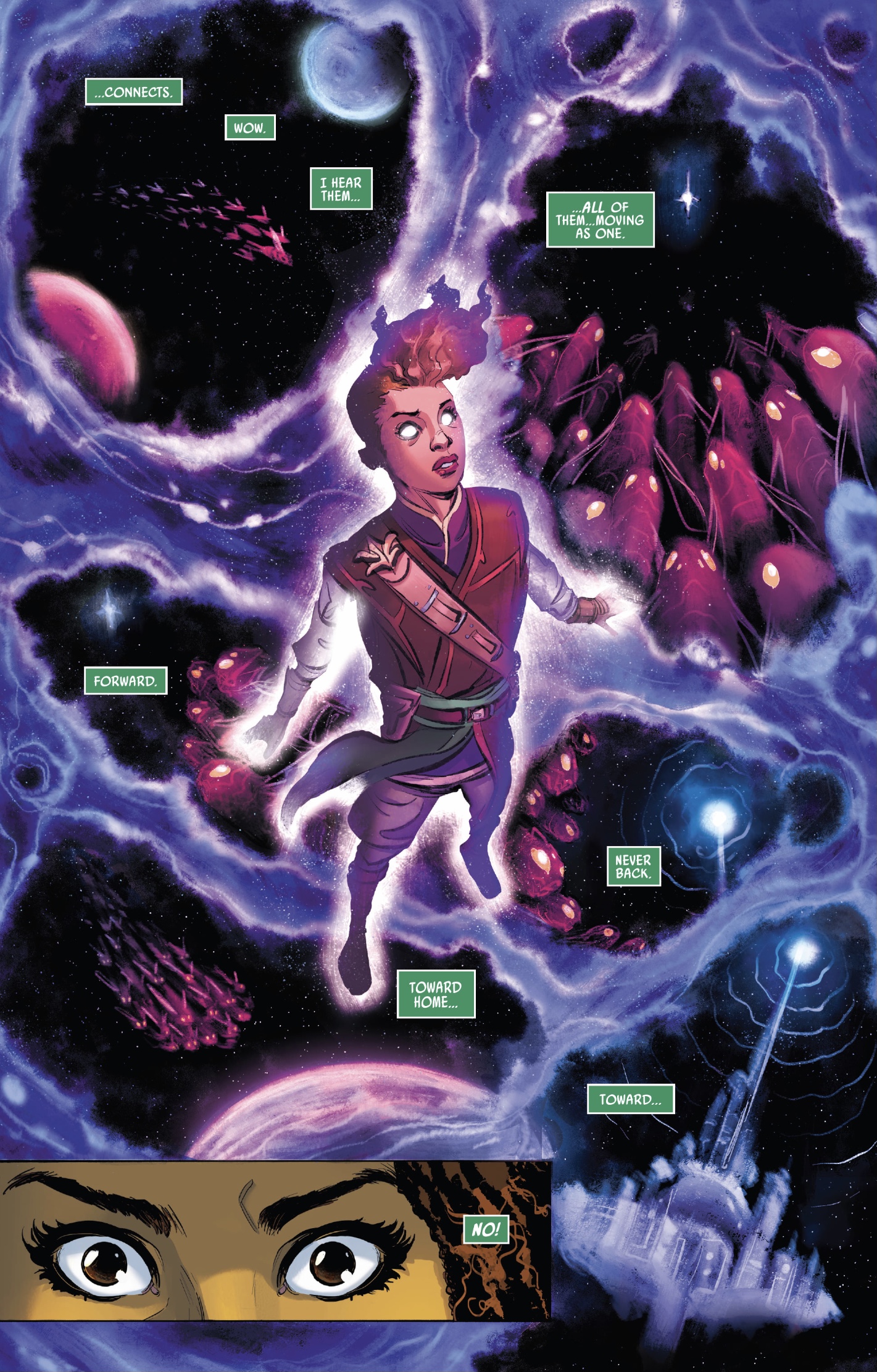 They are a species called ridadi and they are headed for Starlight Beacon. They’ve been trying to reach a star for nearly a thousand years but for some reason Starlight Beacon has interfered and the swarm of giant ridadi are headed right for it. Their intentions aren’t malicious, they are naturally attracted to energy, similar to what Starlight Beacon uses to broadcast across the galaxy. Keeve hops in her Vector (small ships designed specifically for Jedi) and comes up with a plan to mimic the signal. 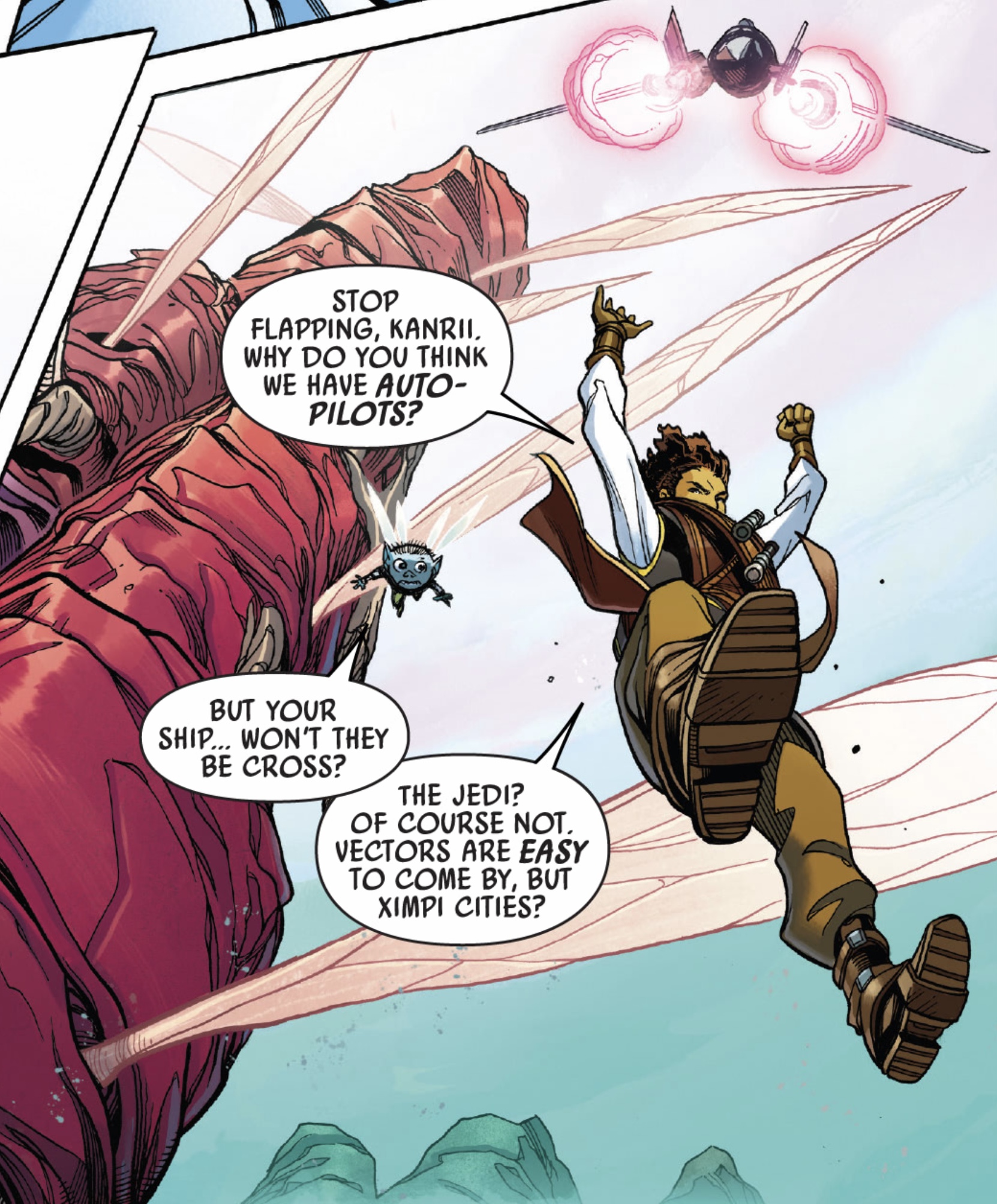 Keeve has not only managed to save Starlight Beacon, she protected her new friends city. It’s likely she saved the swarm of ridadi, as well, since the Republic would’ve taken harsh measures to protect their new waypoint. Keeve believes she did the right thing and most importantly, what a Jedi would do, so she’s confused when Master Sskeer doesn’t seem very happy to see her. He barely says anything to her at all and requests a ship from Starlight Beacon to pick them up, since a dedication ceremony requires them. Sskeer has a plan, though. 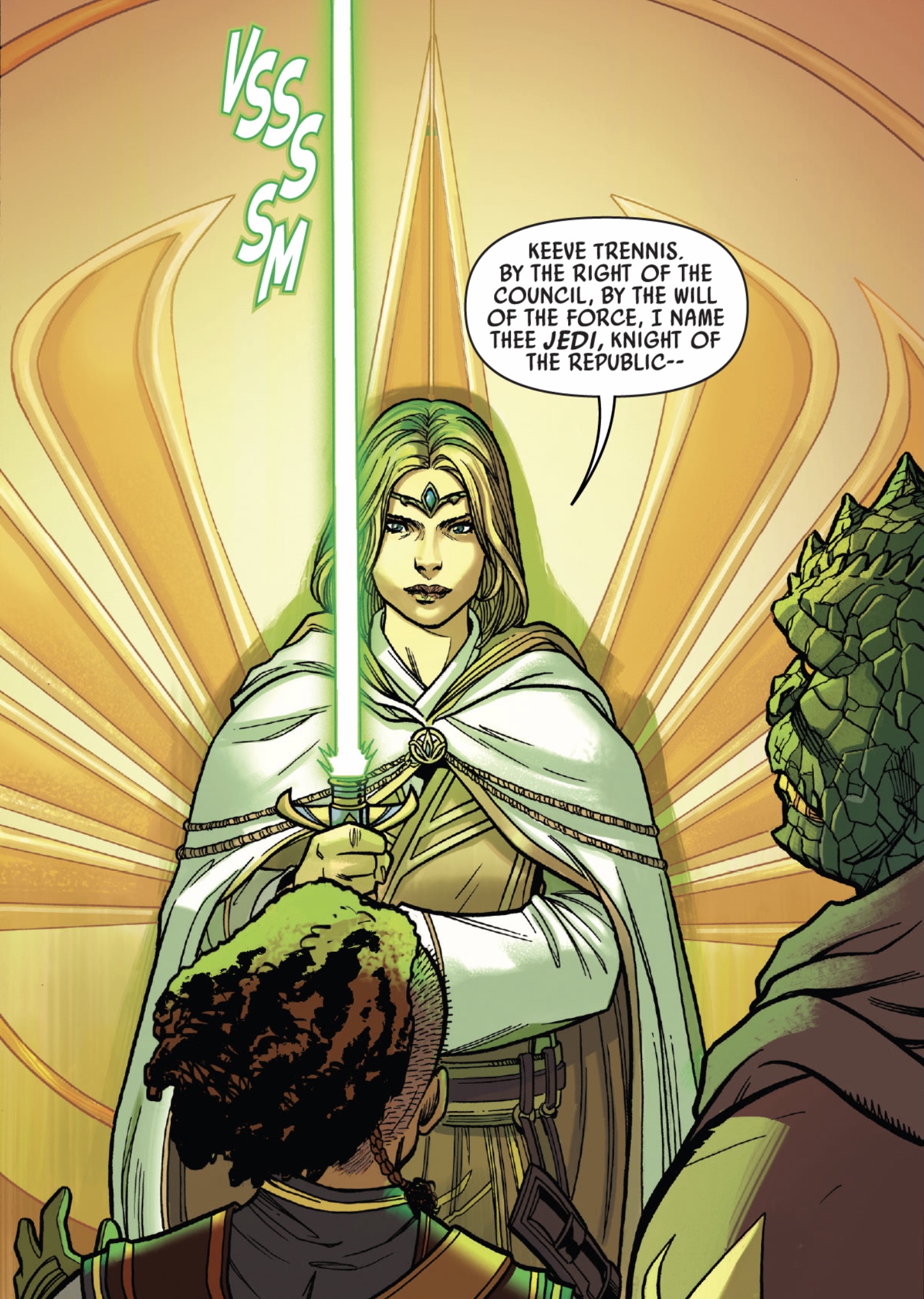 It’s pretty cool to actually see a padawan become knighted, especially in this era. Right up until this moment, Keeve thinks she’s in deep trouble, especially when she learns Master Kriss has been made marshal of the station. Keeve is a character writer Cavan Scott dropped breadcrumbs about in Dooku: Jedi Lost, actually spelling out her fate, which I won’t spoil here. Introducing Keeve on the day she becomes a Jedi suggests we are going to get the whole story. If you’re curious, Dooku: Jedi Lost is a fantastic read and I can’t wait to learn more about Keeve Trennis. 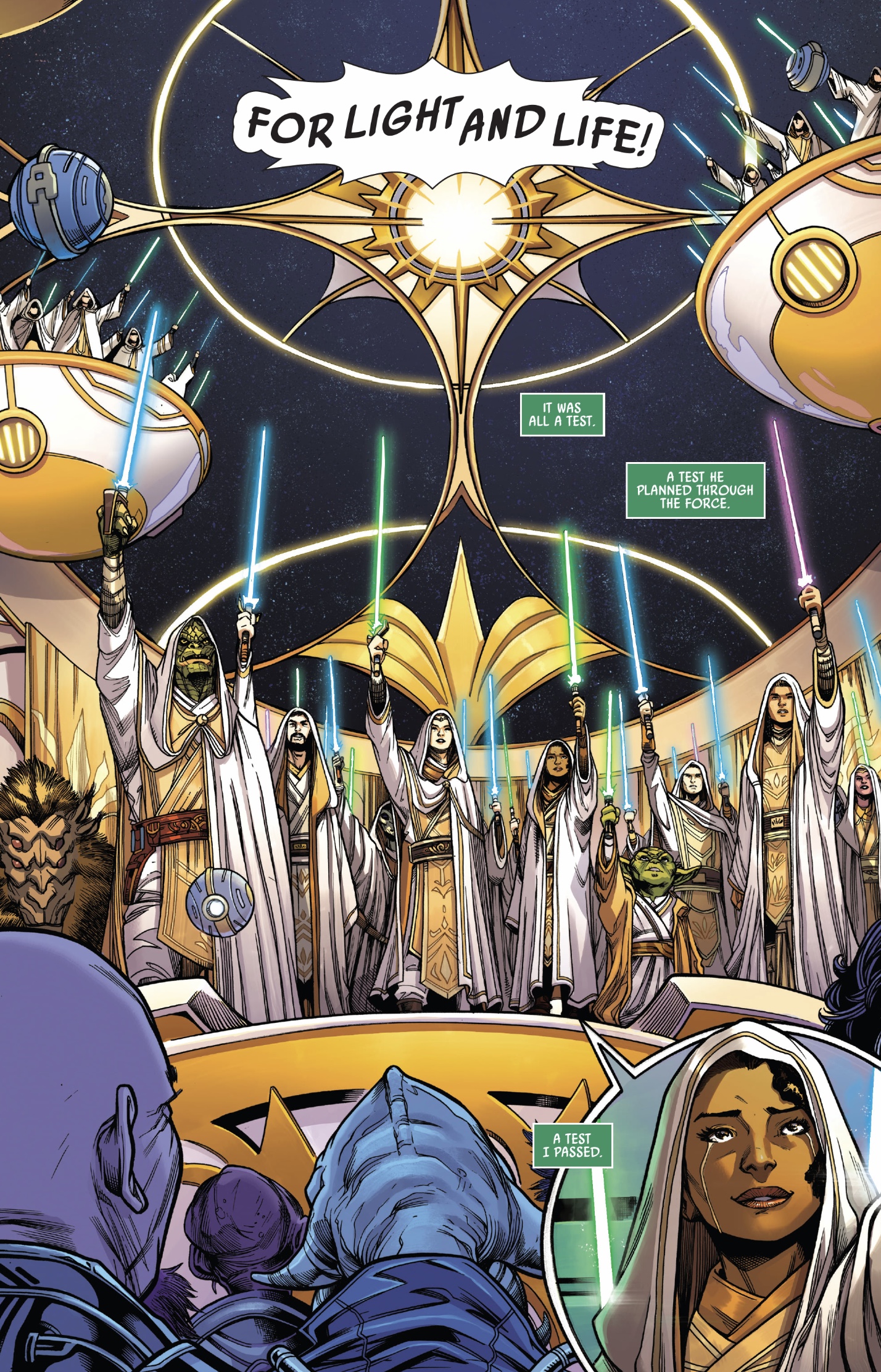 Now this is quite a sight to behold! Each of the new books ends at this scene, so it’s beautiful to see it here by this gifted team of artists. Especially from the perspective of Keeve. Starlight Beacon is also a contentious project for some in the Outer Rim, especially for the Jedi’s new adversary–the Nihil. Though they haven’t shown up yet I imagine Keeve Trennis and the rest of the Jedi will have their peace interrupted very soon. 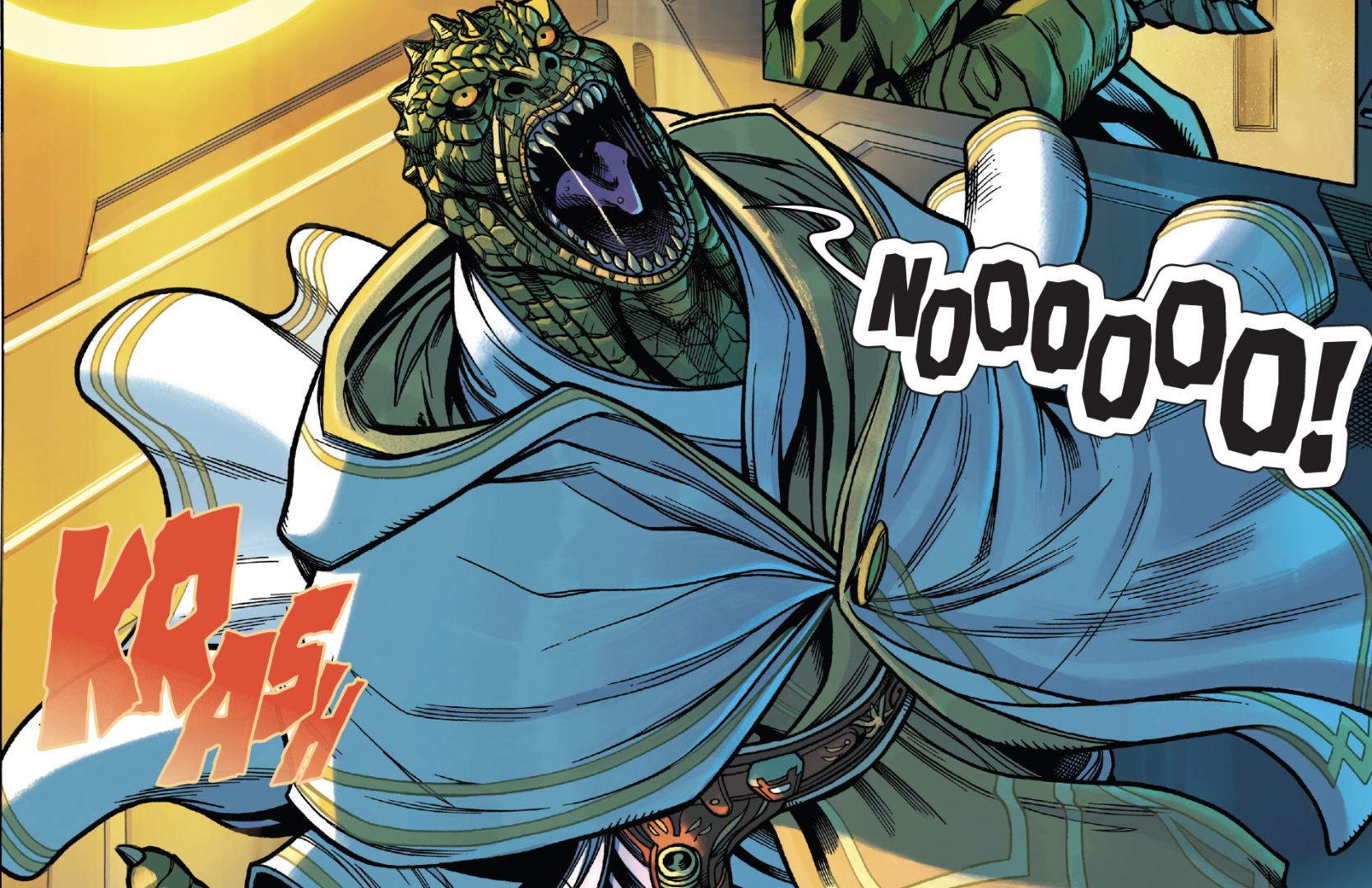 And Avar was right…something is wrong with Sskeer. We don’t know what but he’s not going to be able to hide it.

Great start to Marvel’s The High Republic! This first issue has a lot of promise and I’m excited to move beyond where all three books end. It’s really hard to list everything new in this era but writer Cavan Scott and the artists did a great job adding elements from the book without getting sidetracked by explanations. Again, if you feel lost, I highly recommend reading Light of the Jedi by Charles Soule as a primer before diving into this series. It doesn’t seem like Scott is going to slow down the story for those who haven’t read it. It’s also a great introduction to these characters and this series, which is going to be great! 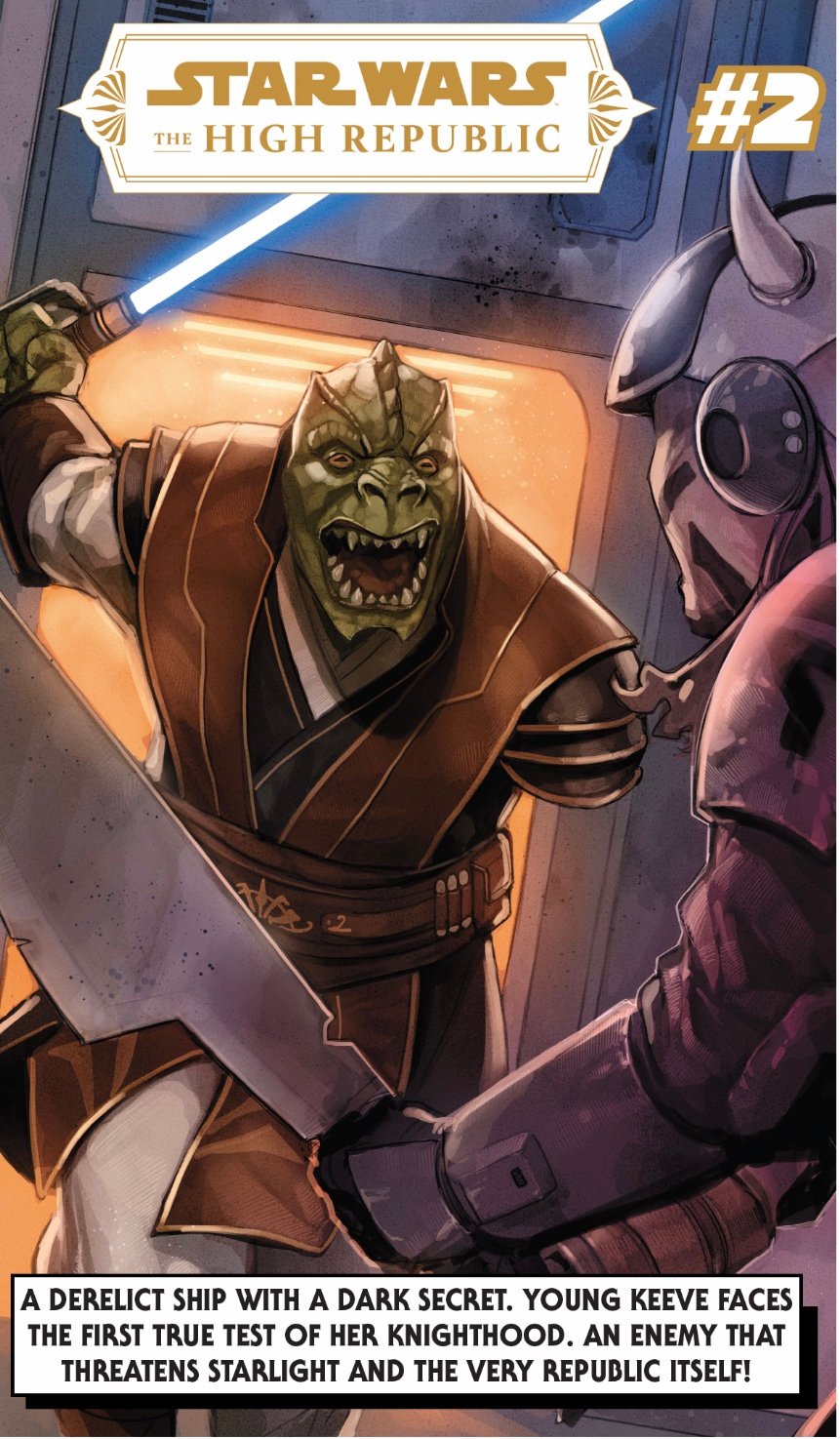