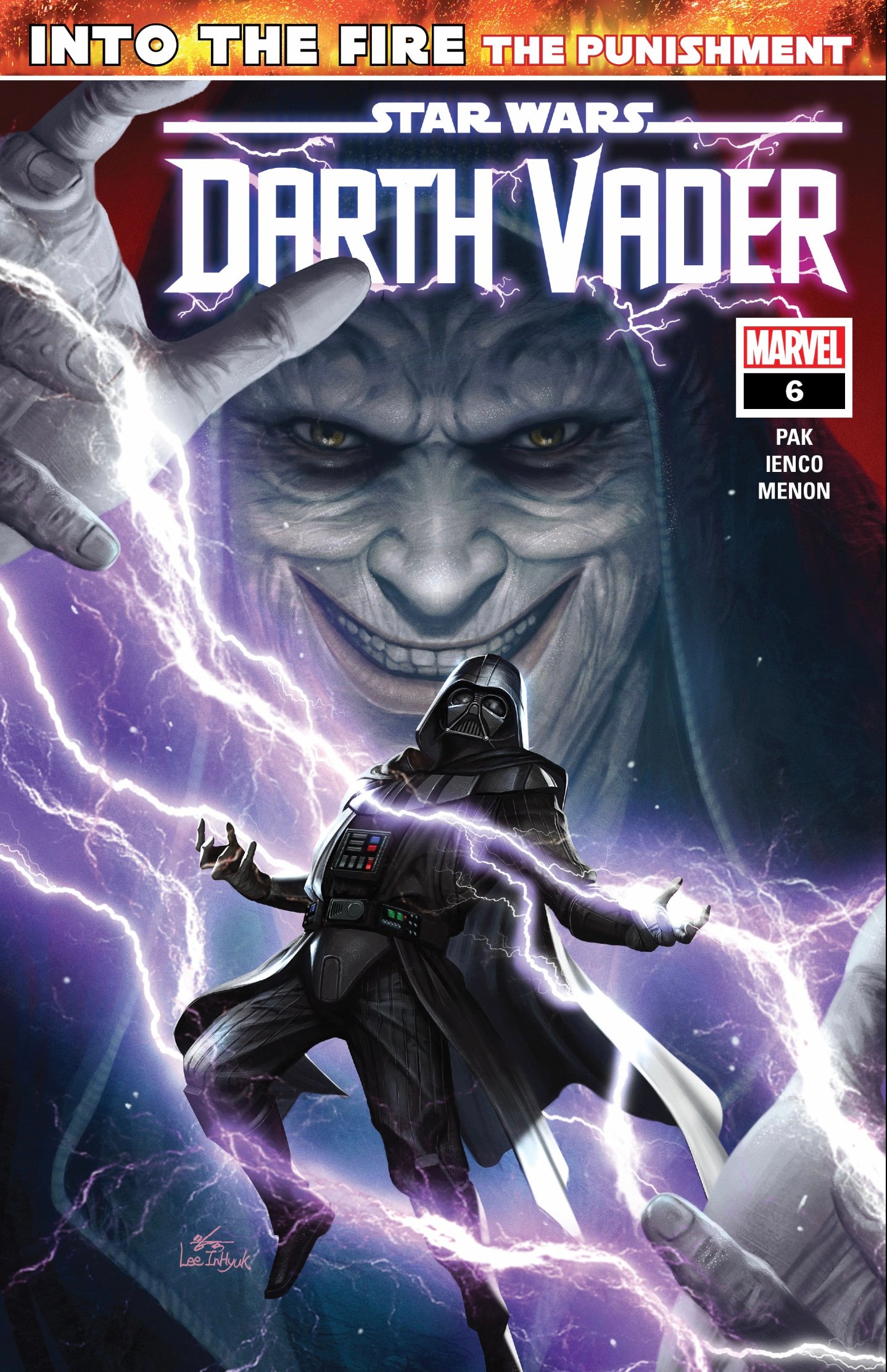 Writer Greg Pak starts a new arc, “Into the Fire”, in Darth Vader #6. So far, I’ve enjoyed Darth Vader, especially Pak’s first five issues. The two Vader series preceding gave us a look into the conflicted soul, mourning the absence of Padmé and finding hope in the discovery of their son. We’re not the only ones who’ve been following this journey. Darth Sidious senses the obsession taking hold of his apprentice and is determined to vanquish it. The master does what must be done, through the cruelest means necessary. SPOILERS AHEAD…. 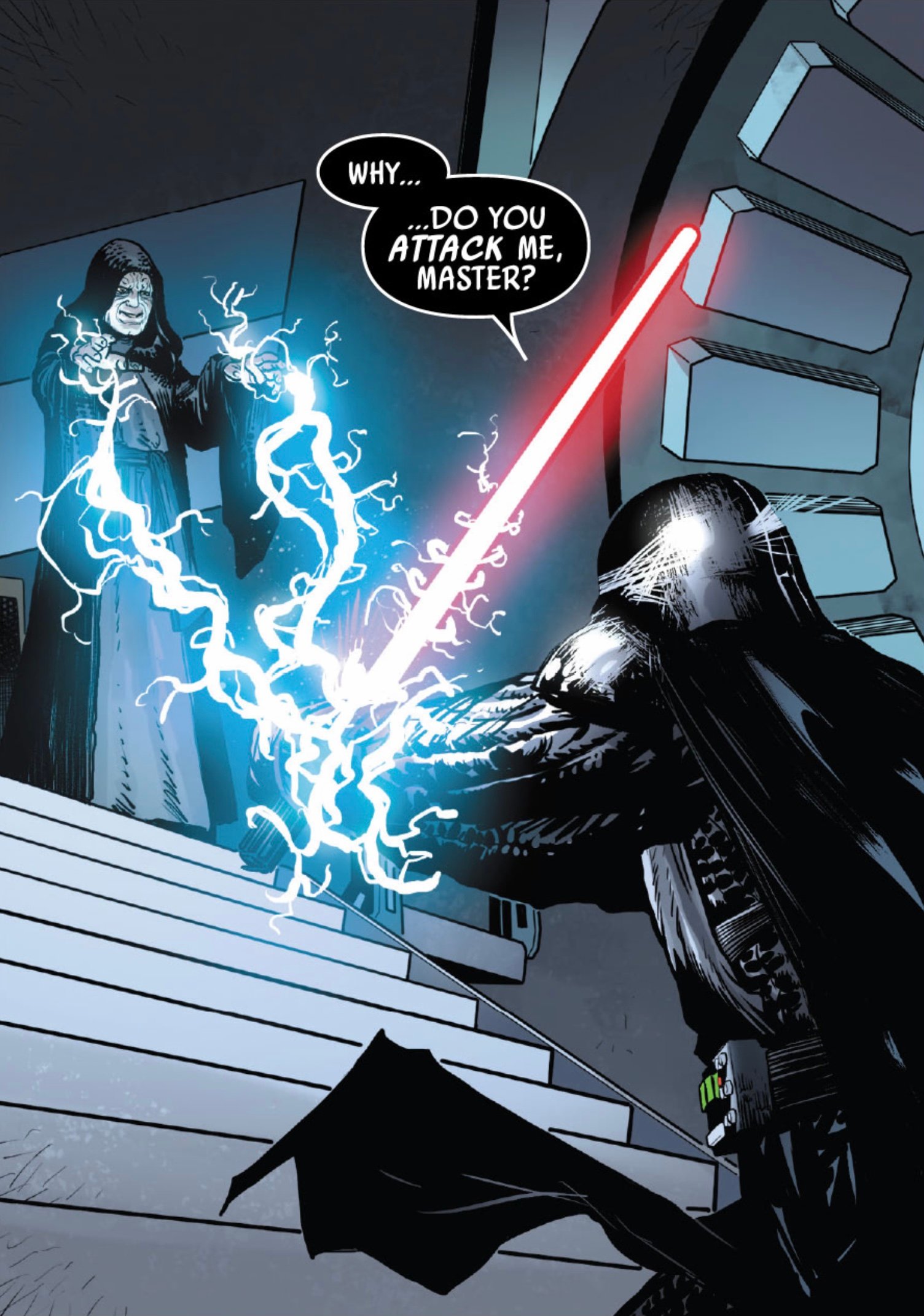 Sidious  doesn’t mince words with his apprentice. The failure to contain or kill Luke Skywalker amounts to treason in his eyes. With special insult, Sidious allows his lackey, Mas Amedda declare Vader’s death sentence. Sidious snatches Vader’s lightsaber and sends his Royal Guards after him. All while this unfolds, stormtroopers guarding the Imperial Palace below look up and see the lightning bolts flashing from the Emperor’s throne room. It’s a very eerie scene, not reminiscent of Sidious’ attack on Luke in Return of the Jedi but possessing it’s own brutality.

Vader really takes a beating. Sidious never does anything without calculation, though. Just as the Dark Lord looks like he may fall, the tide turns. 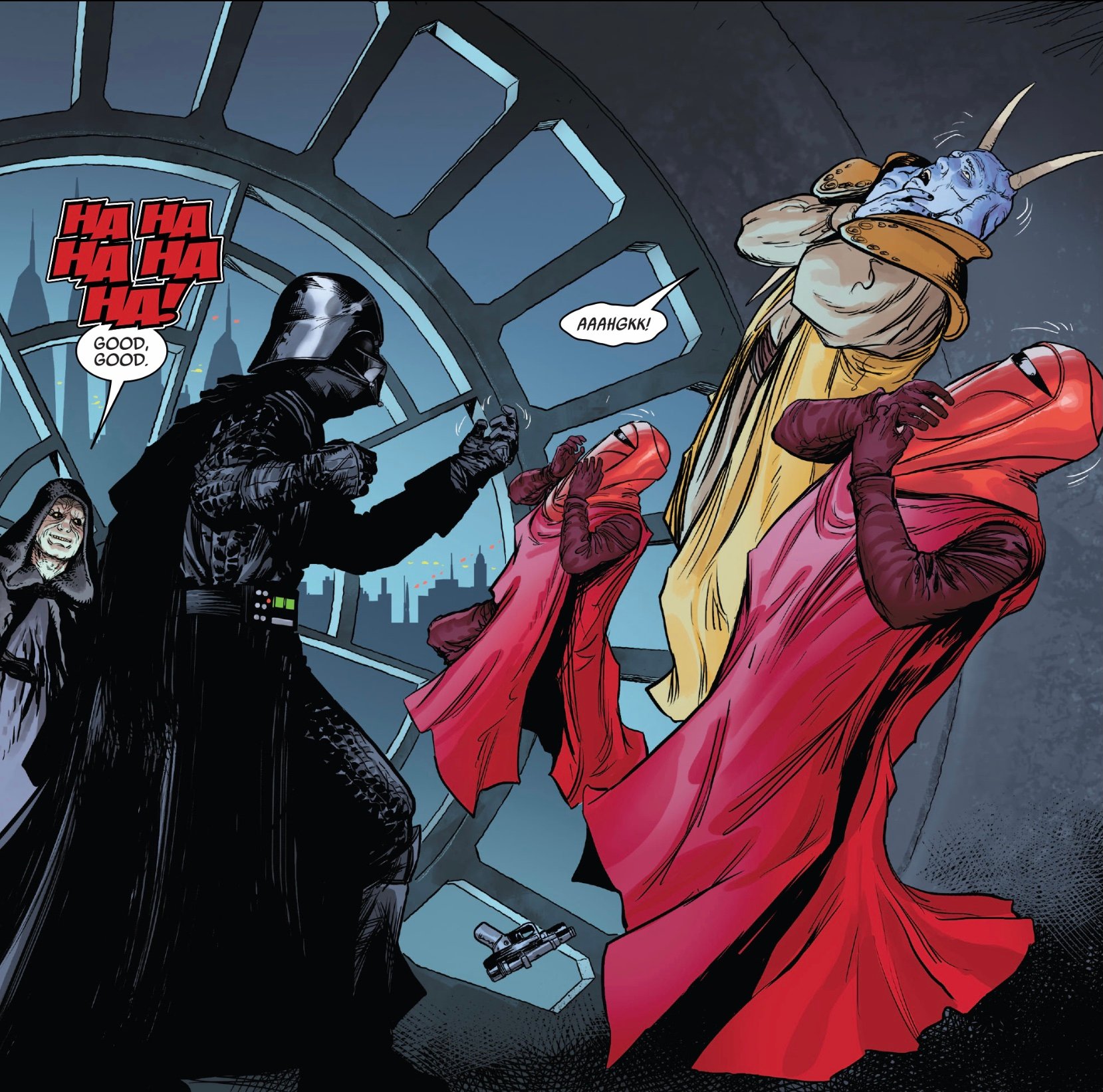 You can see Sidious in the background, grinning happily as the dark side pours into his throne room. He’s debased Vader from the monolith of terror to a desperate animal, lashing out to survive. It’s really jarring to see from the reader’s perspective. We’ve seen Vader cornered, we’ve seen him in despair, but there is a palpable fear conveyed through the art of Raffaele Ienco and colorist Neeraj Menon. What’s established by the comics and films to this point evoked my sympathy for Vader. At this point in time, these are the last throes of his time in the dark side. Sidious likely senses something bad headed his way through the Force, so perhaps this is his own act of desperation. 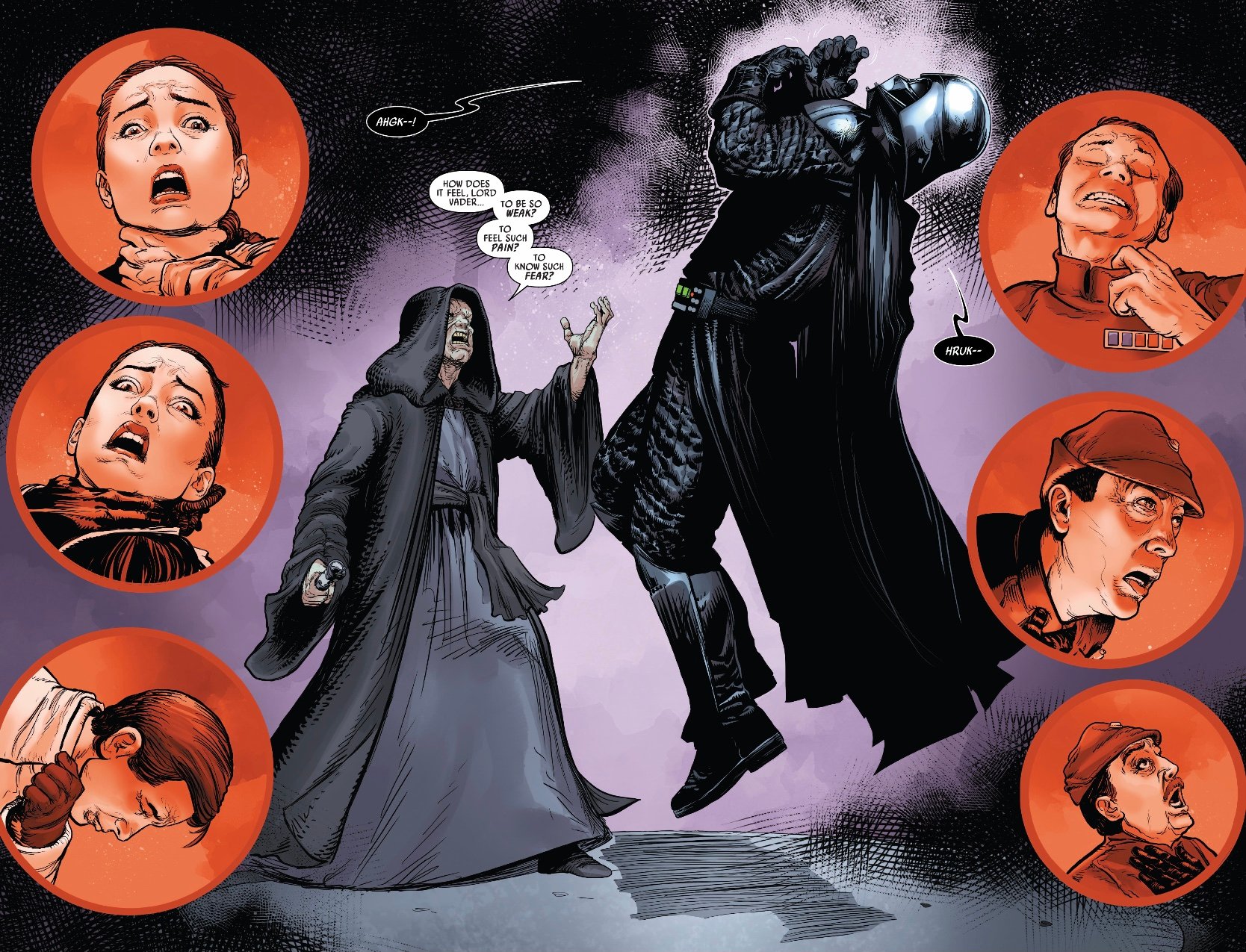 Sidious turns the tables on Vader, reminding him of his own victims. As he does this, he invokes Padmé and Luke, desperate in his own way to burn their memory from Vader. I guess we see why Vader paused his search for Luke between The Empire Strikes Back and Return of the Jedi, as Sidious turned the screws and pressed his thumb down on any movement Vader made. In a fantastic display of power, Sidious rips the cyborg limbs from Vader’s torso, tossing them aside and leaving only the body he rescued on Mustafar. Sidious is clear in his intention, if this final lesson doesn’t straighten Vader it his hand is forced. 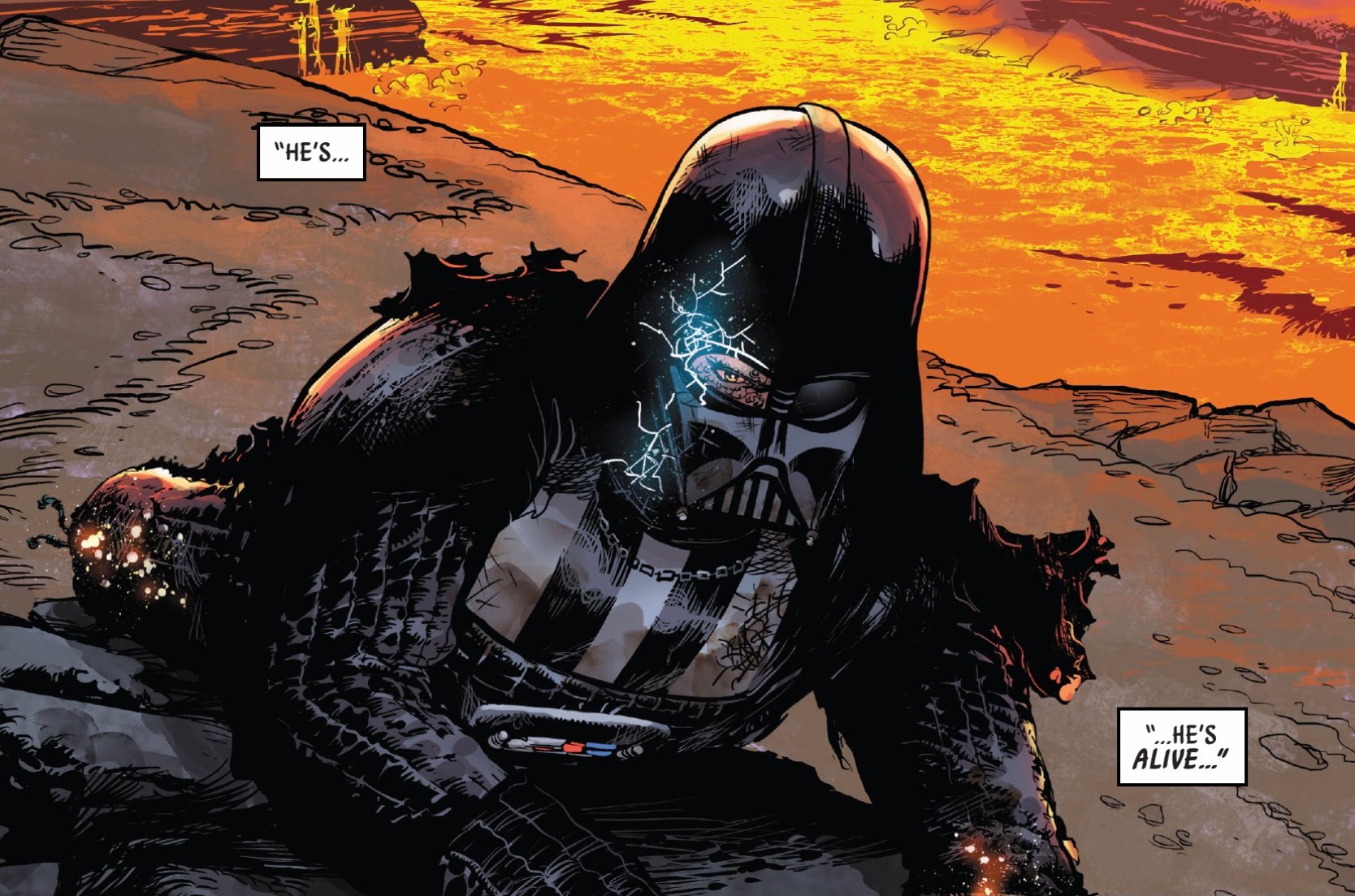 Wow! Sidious really hits Vader, returning him to Mustafar and dumping him in the exact spot where Obi-Wan left him. The final lesson spelled out, Vader is forbidden from using the Force and must find his way back using only his physical strength. Sidious permits a lightsaber but that’s it and he warns Vader he’ll be nearby monitoring him – so he shouldn’t even consider using the Force. As Sidious departs, Vader reflects on his last sight of Obi-Wan walking away, juxtaposed with their final moment together on the Death Star. In his memory, Obi-Wan turns to Sidious as the blade touches him, reinforcing the hatred of what both these masters turned him into. Vader’s had his revenge against his Kenobi and now his desire to bring down Palpatine has never burned stronger. He’ll have to bury it, for now. 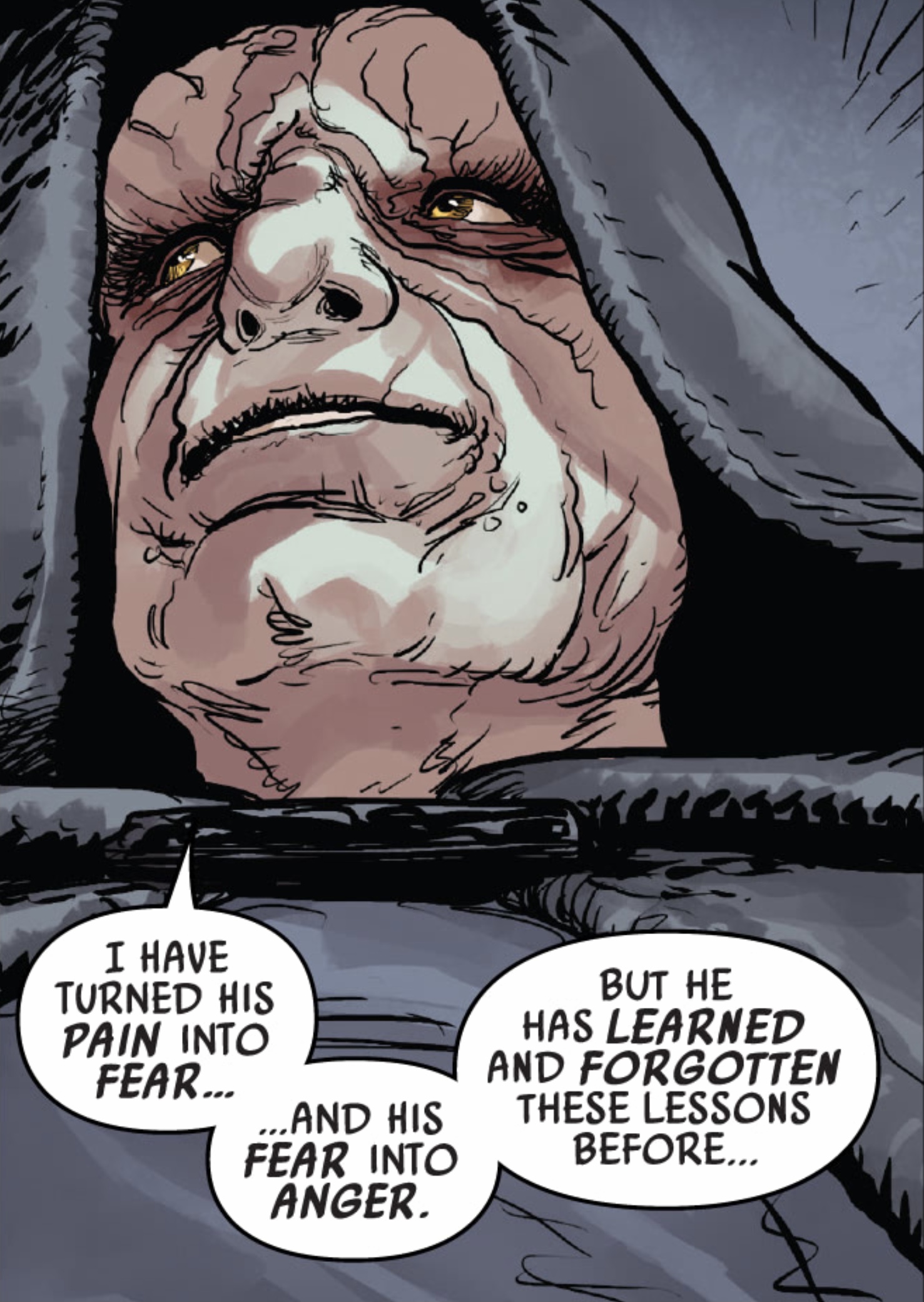 Sidious and Mas Amedda monitor Vader, who’s slowly on the move. The master laments over the emotional rollercoaster and the cycles of pain Vader experiences. These conflicts became cycles in their history together, whether it’s sending Vader to build a fortress so he can learn bringing Padmé back is not possible or unleashing a cyborg army on him to test his mettle. Sidious doesn’t know it, as he states he’d happily do this to his apprentice forever, but this will be their final cycle. And he’s brought a new challenge for Vader. 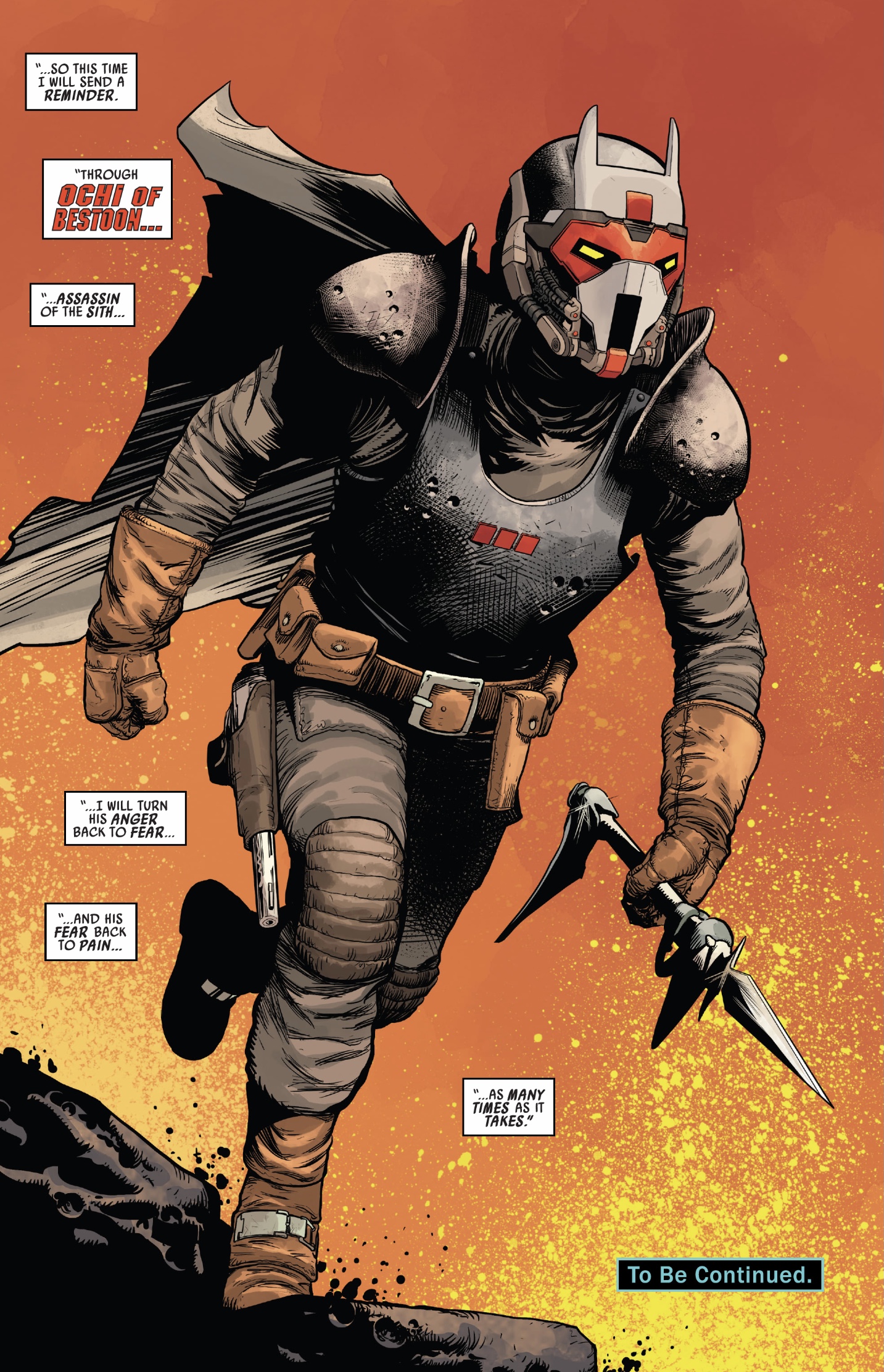 Hello Ochi! It looks like we’ll be getting a history lesson about this mysterious character. The years between this period and The Rise of Skywalker look like they were pretty rough on this assassin. We’re getting Ochi in his prime, “assassin of the Sith“, and the newest opponent of Darth Vader. Looks like this is going to be quite a ride.

I’d be lying if I said this appearance of Ochi didn’t make me a little nervous. Coinciding with comments writer Greg Pak has made about this series’ connection to The Rise of Skywalker and some future covers we’ve glimpsed, I’m very nervous this series is going to attempt to fix the many plot holes and canonical inconsistencies of the film. I’ll spare you my rant, but it’s clear The Rise of Skywalker was written in a vacuum and many fans were perplexed by this. Most of us who didn’t enjoy the film are ready to move on, so I really hope this isn’t going to try and retread elements of that story. I hate to be cynical but if we’re going to stick to the original trilogy and a character as complex Vader the story shouldn’t regress to serve as retcon.

And this “Sidious testing Vader” has certainly been done, so I hope Pak has something very original coming our way. Due to the time period this story takes place and the imminent onslaught of The High Republic content, I assume this is the last Darth Vader series. Let’s hope it goes out with a bang and not disappointment, like other final chapters. 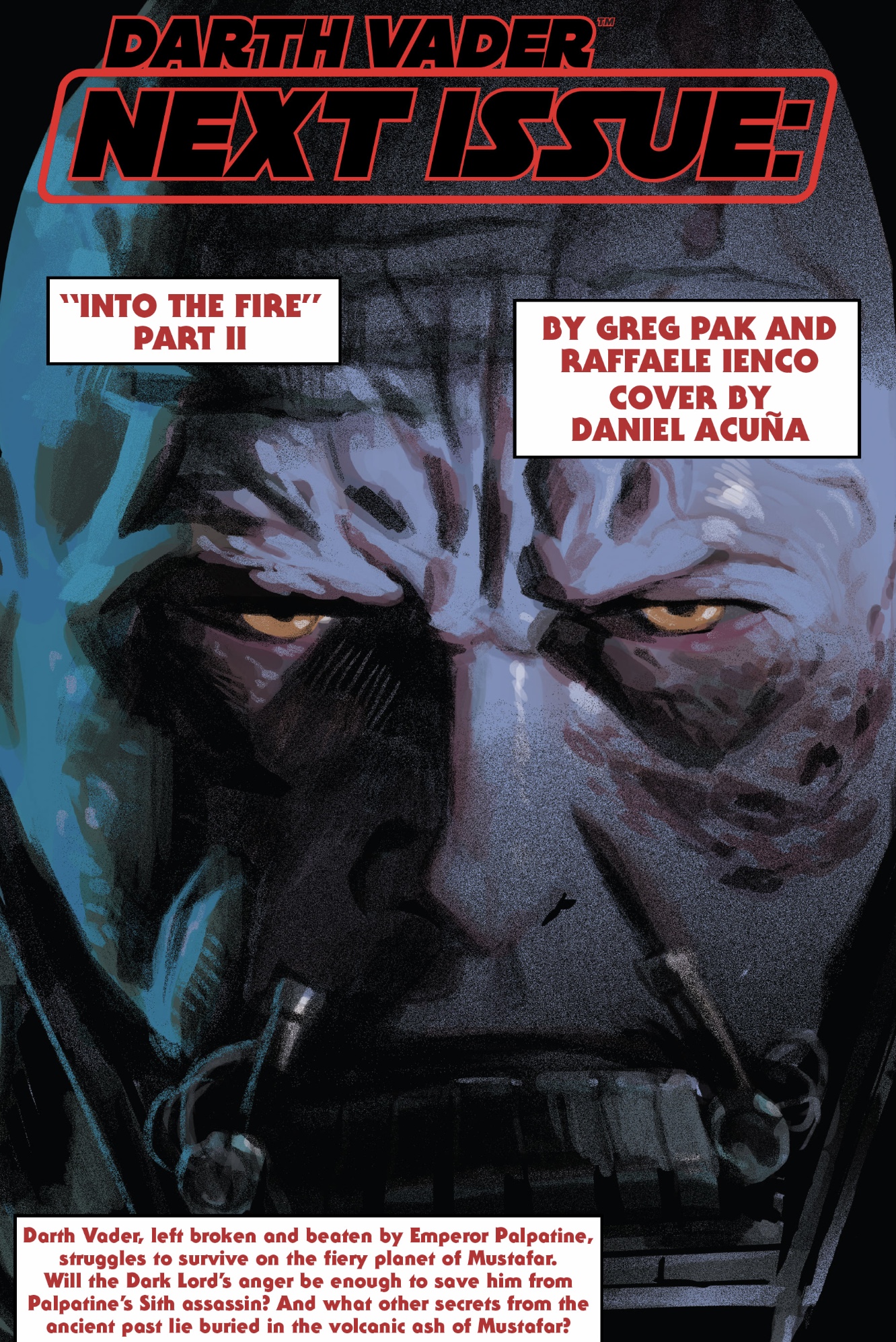