Star Wars: The High Republic may have been delayed until January of next year, but today, StarWars.com gave us a look at one of the most iconic characters of the Star Wars saga as he appeared during this era. Set some two-hundred years before the Skywalker Saga (Episodes I-IX), the High Republic was a sort of golden age for the Jedi. It only makes sense then that we get to see a slightly younger version of Master Yoda and get a glimpse into what he was doing at this time.

According to StarWars.com, Yoda will feature prominently in Daniel José Older’s Star Wars: The High Republic Adventures comic, coming 2021 from IDW Publishing. Though not a youngling by any means (he is already seven centuries old), a younger Yoda means a brand new take on the character’s design, so although he will be mostly familiar, there are some subtle changes that needed to be made to his appearance to shed a couple of centuries off of him.

“It’s especially exciting to be able to introduce him in the era of the High Republic…the High Republic Yoda is a journeyman out in the galaxy…while he’s already a respected member of the Jedi Council at this point, we meet Yoda in IDW’s The High Republic Adventures series doing what he loves best: looking out for the young folks — in this case, a group of Padawans traveling around the galaxy to learn the ways of the Jedi with a hands-on approach – the Force study abroad program, basically.” – Daniel José Older

Since the character would be appearing in a visual medium rather than a novel, the new design was very important to get right. Lucasfilm art director, Troy Alders explains their approach to his design:

“The goal was to update Yoda, but to be careful and be true to the Yoda that we all know and love…also, to really make sure that the new look was believable, as this is really the first time that there has been an opportunity to update his look and his clothing. It felt like a daunting and enormous responsibility to embark on and get right.” 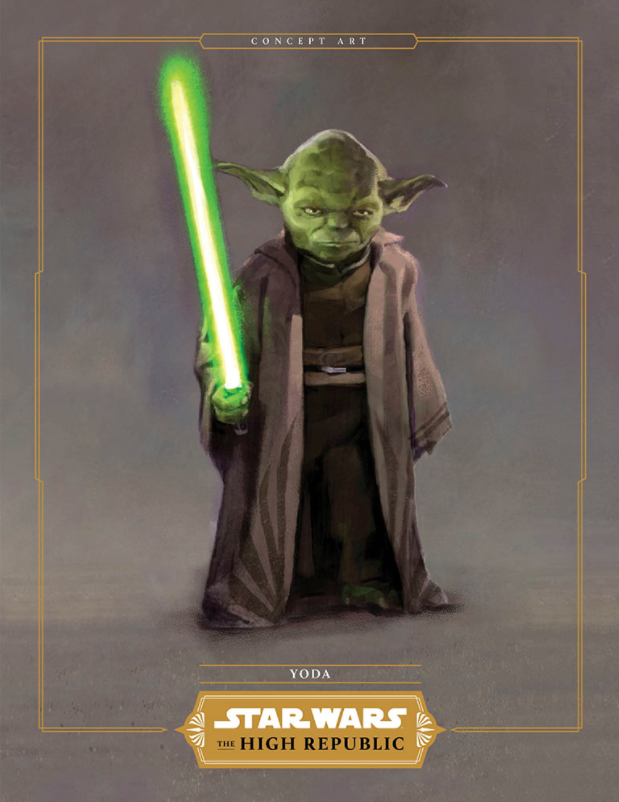 This one looks like a shot straight out of the prequels (minus the ornate designs on the robe), so I imagine they were using that design as a baseline for the update.

“Well, Yoda is not that much younger — around 700 years old instead of about 900. But we thought that with it being hundreds of years earlier, he would definitely have a different outfit, maybe even more than one. His age, as far as the way that his hair and face look, is maybe just slightly younger, but fairly close to his look in Star Wars: The Phantom Menace.”

(Thank the maker it looks like Alders was referring to his look in the Blu-Ray version rather than the original theatrical release of The Phantom Menace.)

Alders went on to say that veteran Star Wars concept artist Iain McCaig felt like the “go-to artist” for the job. Other artists also contributed to the final look, like Disney Publishing illustration manager Jeff R. Thomas and Star Wars: Dark Legends artist Grant Griffin (whom we have to thank for the new images).

“This mission outfit, with just tonal markings on the robe, are inspired by the Jedi Temple architectural details. Many new fans may not even notice these very subtle additions. The temple attire, however, from this special time of the golden age of the Jedi, feels so right with its elegance, and we are all extremely grateful for the artists that helped us arrive at such a beautiful solution for this important milestone in the Star Wars timeline.” – Troy Alders 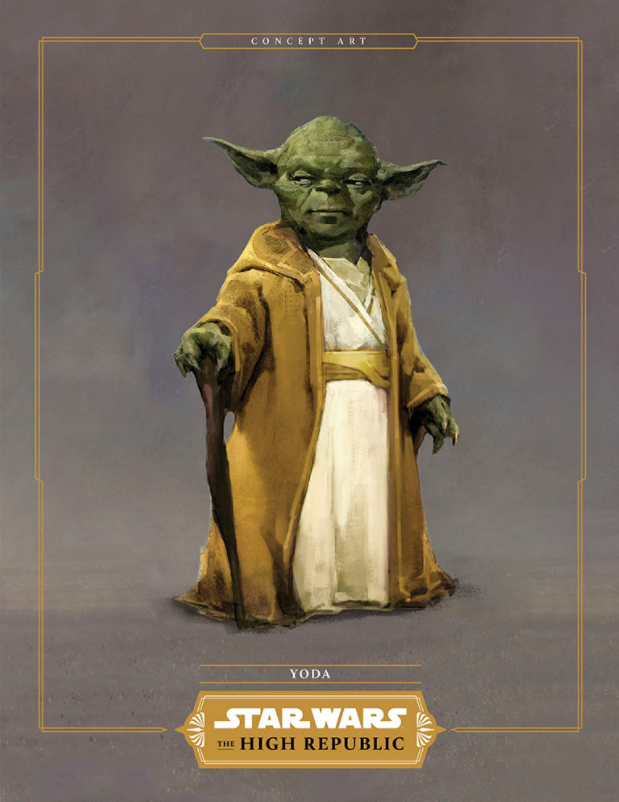 It’s exciting to see Yoda play a crucial role during this period, as it seemed like a no-brainer to include him in the larger story. Although I would love to see Yoda in his prime, I think it’s great to see what he’s up to during this time as well. He still has the cane, so I don’t think he’ll be significantly more agile than we’re used to seeing him (not that he wasn’t insanely agile when he wanted to be in the prequels).

If Yoda is around the equivalent of an eighty-year-old human in the original trilogy (which is just an estimate on my part), then at seven-hundred, he’s probably about like a sixty year old – no longer in his prime, but still going strong and not anywhere close to throwing in the towel.

I love that he is working with younglings during this time as well. This is one of the things I’ve grown to appreciate about the character over the years. He’s great with children, and it also helps explain his hesitancy to train Luke in The Empire Strikes Back. He just wasn’t as comfortable working with adults. And I can’t say I blame him. Raising the next generation is a huge responsibility, but it can be very rewarding as well, and I can’t think of a Jedi better suited for the job.

“Truly wonderful, the mind of a child is.” – Yoda (Attack of the Clones)