'The Sims 4 - Star Wars: Journey to Batuu' Review: A Charming Distraction, but It's All About the Rewards - Star Wars News Net Go To Top
Skip to content

‘The Sims 4 – Star Wars: Journey to Batuu’ Review: A Charming Distraction, but It’s All About the Rewards 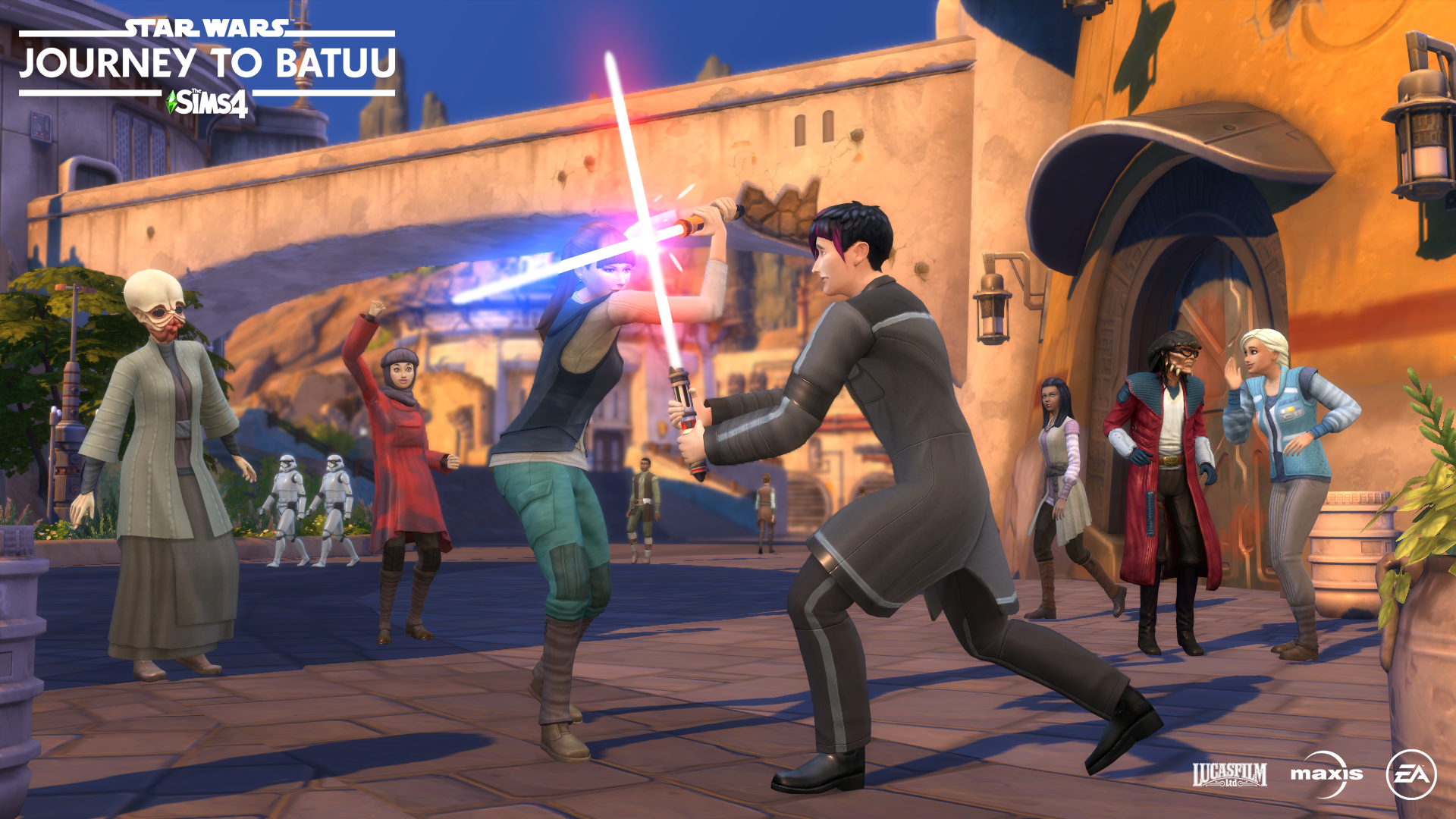 The latest game pack for The Sims 4 takes players to Batuu, the planet featured in Galaxy’s Edge and some recent pieces of Star Wars media. Is this a journey worth taking?

Maxis’ The Sims 4 first launched in 2014 to mixed reception. Fans and critics praised how it made its titular characters more complex, but the hardcore community was more critical of the game’s smaller scale (The Sims 3 was ambitious). There was also an outcry due to the lack of toddlers on launch (they finally arrived in 2017). Of course, it would not be a Sims title without an endless stream of content drops. After six years, this installment has over 30 content packs that expand the base game in a variety of ways. There are expansions, game packs, and stuff packs (plus community-made mods). You can experience The Sims 4 in any way you want. There is something in there for everyone (as long as you like the basic experience).

Journey to Batuu is a game pack, a medium-sized chunk of thematic content which normally costs $19.99 USD. In the past, these packs have focused on vampires, magic, and jungle adventures (among others). This time, EA’s Maxis has collaborated with Lucasfilm and Disney to officially mix the Star Wars universe with The Sims for the first time ever. Is the experience engrossing enough? 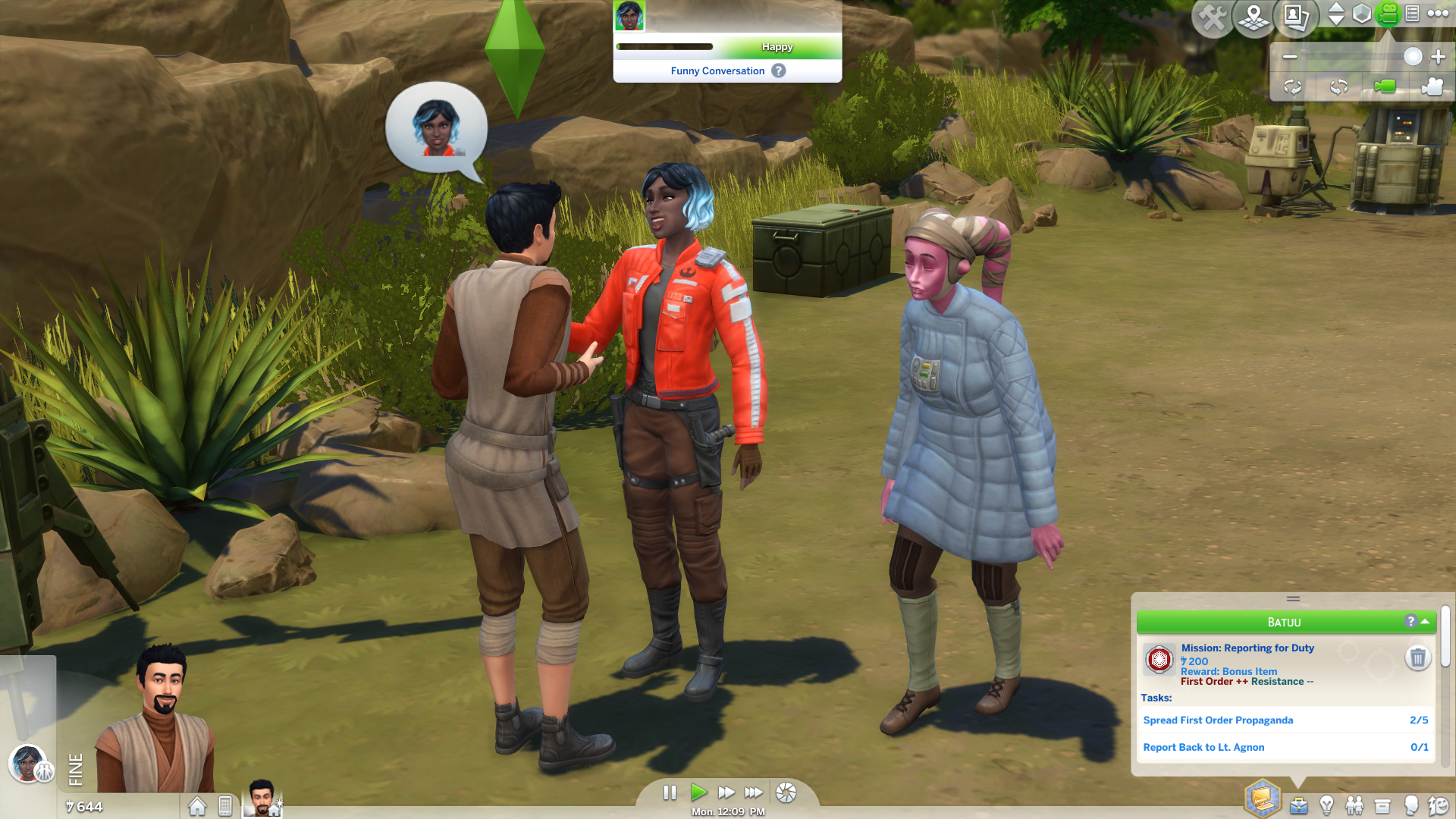 Meeting with Vi Moradi at the Resistance’s camp.

Getting to Batuu is extremely easy. I had not touched The Sims 4 since last year, but I only had to load up a game (new or pre-existing) and wait for a call that invited me to take a trip to Batuu. Whipping out your mobile phone and setting up a vacation to a galaxy far, far away also works.

Black Spire Outpost houses civilians, scoundrels, Resistance sympathizers, and First Order troops. There are three different zones, each controlled by a different faction, but the iconic Black Spire portion of the map acts as a main hub of sorts. You are free to walk around, investigate, and interact with whoever you want. Sparring with a custom-made lightsaber or shopping at Dok-Ondar’s Den of Antiquities are some of the unique activities available.

But what about the missions? Well, there are three different factions available: Resistance, Scoundrels, and First Order. Working for the Resistance or the First Order improves your relationship with them and deteriorates your association with the opposite. However, going all the way through a factions’ questline does not lock you out of the other set of missions. You will have to regain the group’s trust though.

The wildcard here seems to be Hondo Ohnaka and his band of scoundrels, who could not care less for the war between the Resistance and the First Order and just want to party and profit. That is the Hondo we all know and love. He is a damn good Sabacc player too. 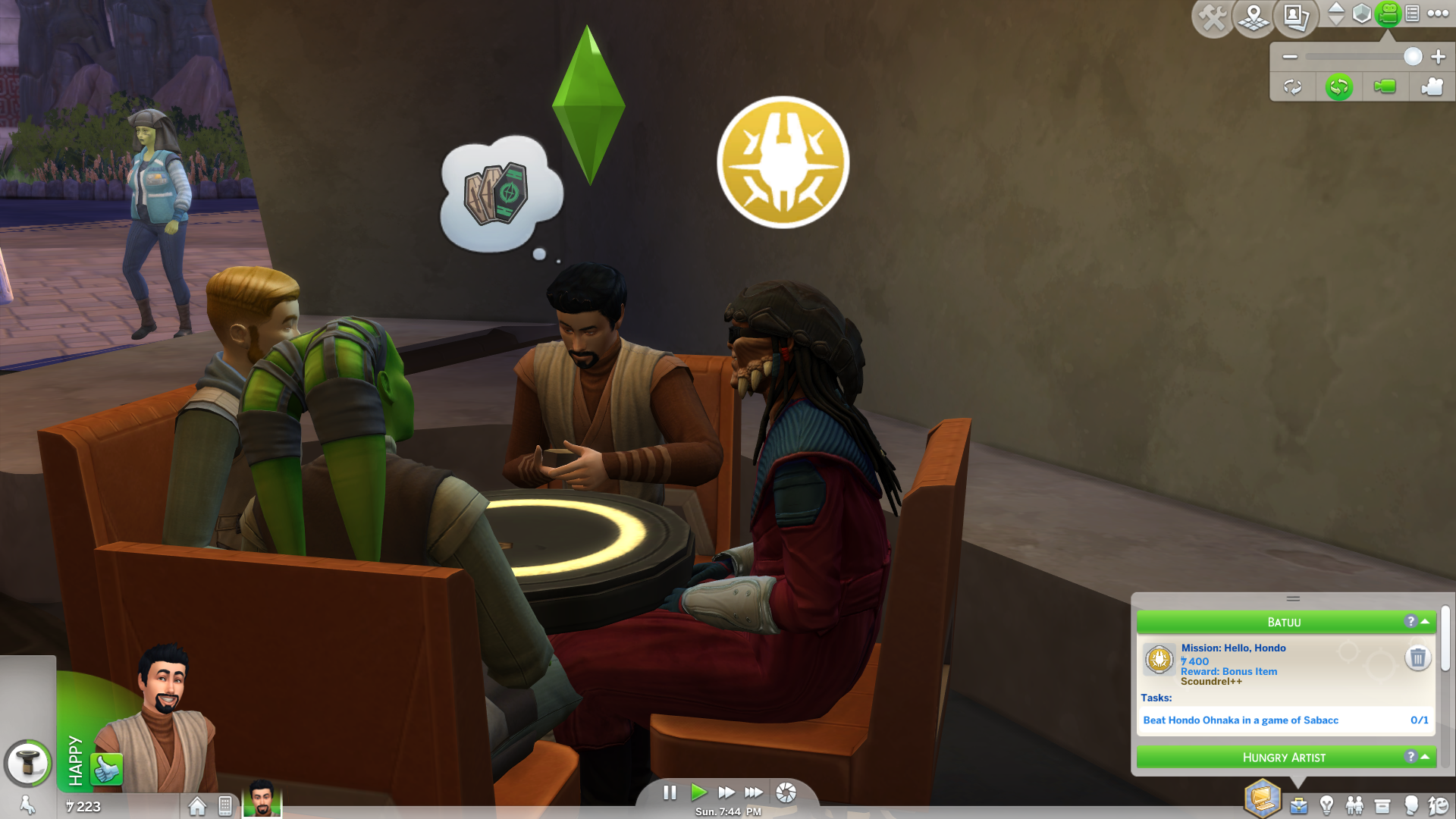 One of the missions tasked me with beating Hondo at Sabacc.

Completing missions fills a progress bar (one for each faction) that rewards you with new objects, clothes, activities, and interactions. Initially, Journey to Batuu feels a bit boring, as tasks are mundane and there is barely any role-playing involved, but missions got more interesting as I moved up the First Order’s ranks (they have the best rewards). That being said, do not expect to spend many hours completing missions; they are fun occupations, but they get repetitive, and going through them once you max out your progress does not yield rewards beyond extra credits (no simoleons here).

One of the pack’s more interesting missions tasked me with infiltrating the Resistance’s camp, which is outside the Black Spire Outpost, and sabotaging their equipment. This actually required me to be careful, wear a disguise, and act when no one was patrolling the area. Rey discovered me a couple of times and mind-tricked me into going back to the cantina. Journey to Batuu can sometimes feel like more than a theme park visit. I wish there was more of that. 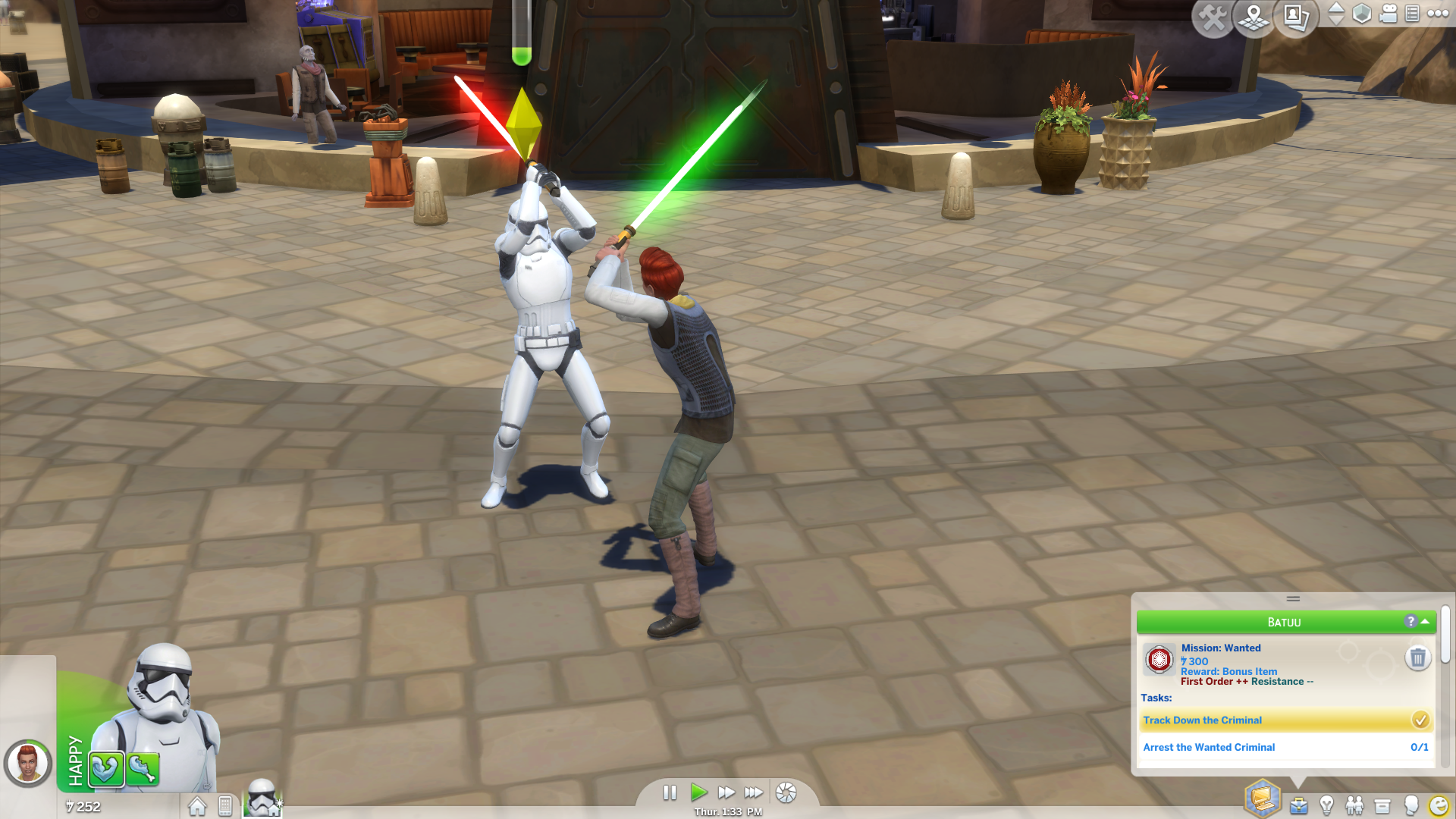 Duels in the middle of the street are allowed.

As teased in the review’s headline, I feel like the main appeal of this game pack is to get Star Wars stuff. Journey to Batuu is, for better or worse, a faithful recreation of Galaxy’s Edge. Once you are done completing missions, buying Star Wars memorabilia, and taking wacky pictures with Kylo Ren (yes, you can hug him), there is no reason to revisit Batuu. Most of the long-term fun will come from decorating my (earthly) living room with a Mythosaur skull and a kalikori. Or hosting costume parties dressed as a stormtrooper. Or playing with my BB-series droid in the porch. At the end of the day, bringing Star Wars into The Sims, and not the other way around, feels more natural and rewarding.

Players who spend hours building houses are also getting some love; there is a surprising amount of new building pieces and furniture available. If anything, the game pack lacks convincing non-clothing cosmetics, which are limited to a few hairstyles and not much else. Nevertheless, modders are already taking care of bringing more locked elements from Batuu into our households, so keep an eye out for that.

In conclusion, Star Wars fans who are into The Sims 4 will probably find enough enjoyment in this pack. Hardcore “simmers” have not reacted well to it, but they were never the target of this content drop. And neither are regular Star Wars fans, who are probably just waiting for next month’s Squadrons or something meatier. If you are curious, set your expectations accordingly.

Thanks to EA for the review code. We are hoping to bring you more reviews of new Star Wars game releases in the future.