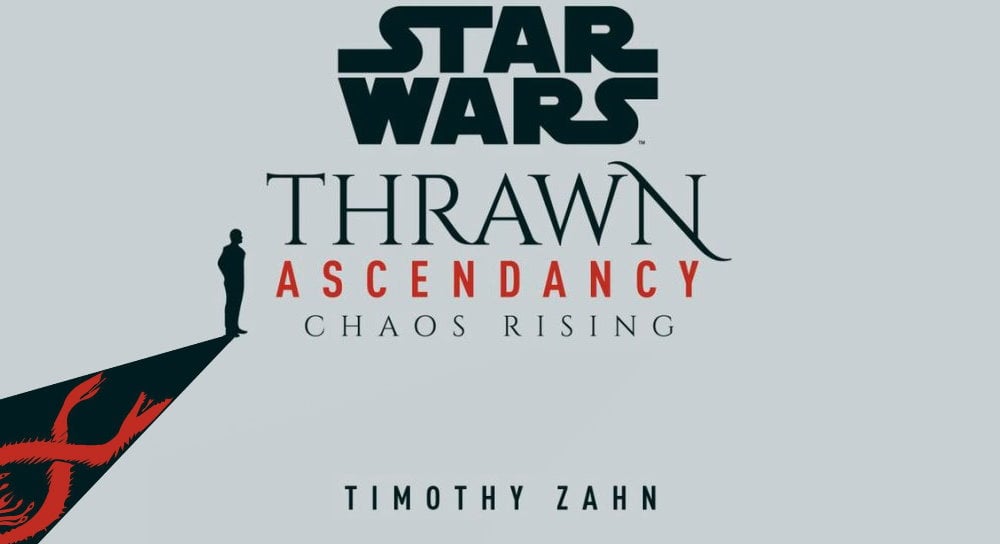 A new excerpt has been released from Thrawn Ascendancy: Chaos Rising, the first installment of the upcoming trilogy of Star Wars prequel novels by author Timothy Zahn centred around Grand Admiral Thrawn.

Chaos Rising takes place during Thrawn’s time serving the Chiss Ascendancy, the mysterious oligarchy that has been hiding away in the Unknown Regions throughout the Skywalker Saga. Thrawn is tasked with tracking down the beings responsible for a devastating attack on the Chiss capital, and that’s all we really know about the story so far.

IGN has published a new excerpt from the story, which sees Thrawn joining up with his superior officer Admiral Ar’alani – whom Star Wars fans might recognise from her appearances in previous Thrawn novels set during the time of the Empire – and hitting back against the species responsible for the attack on the Chiss.

Thrawn was taller than Samakro had expected, and carried himself with grace and a certain air of confidence. He was also courteous to the officers and warriors, and knew his way around the Springhawk. Aside from that, he really wasn’t that big a deal.

Right now, he was also late.

“Acknowledged,” Samakro said, looking around the bridge. All weapons systems showed green, including the balky plasma sphere targeting computer that had been giving them trouble for the past few days. All air lock doors were sealed against possible breach, the electrostatic barrier that hugged the Springhawk’s hull was at power, and all warriors were at their stations.

Impressive, but hardly really necessary. As far as Samakro could tell, this whole mission was only a small step above a wargame exercise. The Vigilant was a full-class Nightdragon man-of-war, and Admiral Ar’alani’s current force also included five other cruisers besides the Springhawk. With that much firepower, appearing without warning over the Paataatus homeworld, they weren’t likely to face any effective resistance.

None of which meant that Springhawk and its crew should be anything less than fully professional here, of course. And that professionalism included its captain. If Thrawn wasn’t here by the time they left hyperspace, Samakro would just have to take over—

“Stand ready,” Thrawn’s calm voice came from behind him.

Samakro turned, fighting back a reflexive twitch. How in hell had Thrawn sneaked onto the bridge without him hearing the hatch open? “Captain,” he greeted his superior. “I was starting to think you’d missed the alert.”

“I’ve been here for the past hour,” Thrawn said, sounding mildly surprised that Samakro hadn’t noticed. “I was overseeing the work on the sphere targeting computer.”

Samakro looked over at the plasma sphere console as two techs emerged into sight from behind it. “Ah. I see it shows green now.”

“Indeed,” Thrawn said. “The quality of the Springhawk’s repair and maintenance crews has improved considerably since you were placed in command.”

Samakro felt his eyes narrow. A compliment? Or a subtle reminder that Thrawn was the ship’s captain now?

From the Springhawk’s starboard side came a sudden barrage of laserfire, breaching missiles, and plasma spheres, ripping into the swarm of enemy fighters. Samakro looked at the display to see the Vigilant and the other Chiss ships charging toward them in full battle-wedge formation.

“Raise the barrier to full power; all weapons: Fire,” Thrawn ordered. “Focus on the enemies outside our other ships’ firing arcs.”

The Springhawk’s lasers and plasma sphere launchers opened up, and the number of attackers dropped precipitously as the Chiss force continued to blast the enemy ships to dust. Samakro watched until the Paataatus force was down to a few fleeing ships being pursued by two of Ar’alani’s other cruisers, then stepped close to Thrawn’s side. “So we play the wounded animal and draw the enemy to us,” he said. “Giving the rest of the force time to regroup and counterattack.”

“Yes,” Thrawn said, sounding pleased that Samakro had figured it out. Even if he’d figured it out a little late in the day. “The Paataatus have a swarm mentality. That thought pattern predisposes them to concentrate their attention on wounded opponents.”

“They start by finishing off the weakest, then work their way up,” Samakro said, nodding.

“Exactly,” Thrawn said. “When I saw the size of the attacking force, I realized the best strategy would be to draw as many of them as possible away from the rest of our ships before they were able to inflict significant damage.”

“As well as drawing them into a tighter cluster that our gunners and targeting computers would have less trouble with.”

“Correct.” Thrawn smiled wryly. “That multi-targeting difficulty is our weakness. I trust the fleet’s technicians and instructors are working to resolve it.”

“Well done, Captain,” Ar’alani said, an edge of annoyance in her tone. “Next time you have a clever plan, kindly share it with me before executing it.”

You can find the full excerpt on IGN, along with an audio version narrated by Marc Thompson.

Thrawn Ascendancy: Chaos Rising will be released on September 1, 2020.