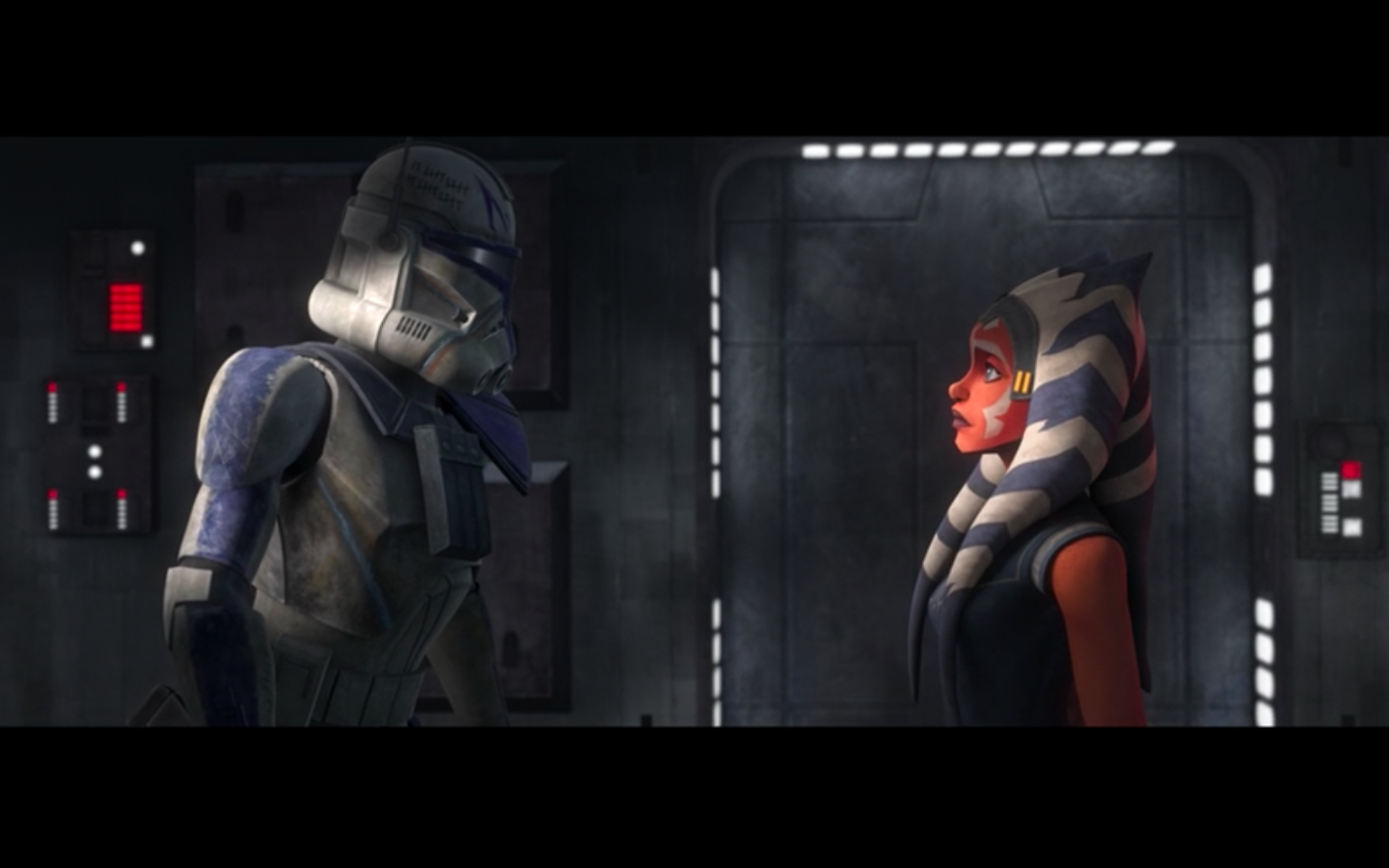 So this is it. The final episode of Star Wars: The Clone Wars. How could we have known where we’d be when this all got started twelve years ago, with an animated movie where Anakin gets a Padawan and she calls him Skyguy. We’ve seen so much change and now we’ve arrived at ‘Victory and Death’, unfortunately there’s a lot more of the latter than the former as the Clone Wars comes to an end. Last episode we saw the galaxy change forever, now we see the impacts on a personal level.

Nothing I can describe is going to match the emotions of watching this episode, so watch it before reading the huge spoilers ahead!

The dread and tension throughout the last episode gave way to the execution of ‘Order 66’ and now we see a battle weary Ahsoka, having freed Maul as a distraction, stuck in the Med-bay with a now chip-removed Rex, as the clones desperately try to break through the door. A last second plan from Ahsoka helps them escape and with the escape pods gone the only way is the hangar.

Maul is still a loose cannon causing chaos throughout the ship though, but he has his own plans to escape, and it doesn’t involve having the ship in hyperspace en route to his old master. With no lightsaber Maul takes down a room of clones and, in an impressive use of the force, destroys the Venator’s massive hyperdrive. 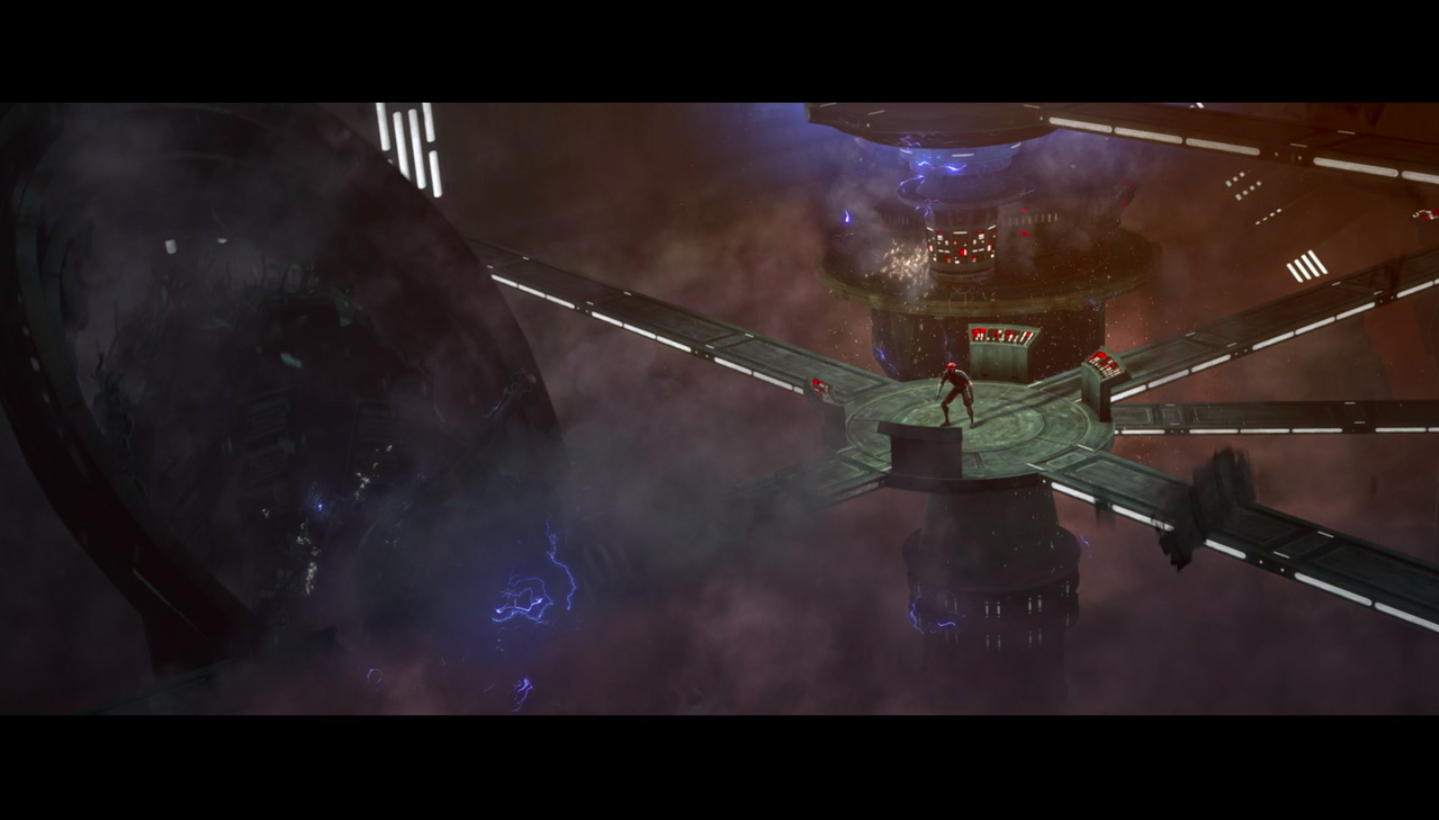 Pulling a ship out of Lightspeed that fast without warning while causing that much damage results in the dying ship being caught in a moons gravitation field, plummeting towards the surface. Rex, Ahsoka and the droids know that they have to leave now. There’s one shuttle left, and with the hanger bay doors open, an escape seems imminent.

The clones are expecting them though with a whole battalion of over sixty Clone Troopers, led by Lieutenant Jesse, standing in the hangar between our heroes and the shuttle.

Rex has been strong up till this point, being stoically silent or cracking the odd joke, but as he and Ahsoka discuss how to get past the troopers his walls come down and reveal the real pain of a man who’s losing everything. Rex suggests fighting their way through, a plan Ahsoka rejects due to there being too many of them and her refusal to hurt them.

‘I hate to tell you this but they don’t care, this ship is going down and those soldiers, my brothers, are willing to die and take you and me along with them.’

It’s an interesting predicament, so far Rex has been stunning enemy clone troopers while Ahsoka runs defense, but does any of that matter when the ship is falling to its destruction with no escape for these troopers? Rex and Ahsoka can’t save them so what difference does stunning them make?

These two friends stand in silence as Rex lets the pain of what is happening sink in further. Ahsoka slowly removes his helmet, revealing a man bred for battle who’s lost countless brothers before, with a tear-streaked face.

‘You’re a good solider Rex, so is everyone one of those men down there. They may be willing to die, but I am not the one who is going to kill them’ 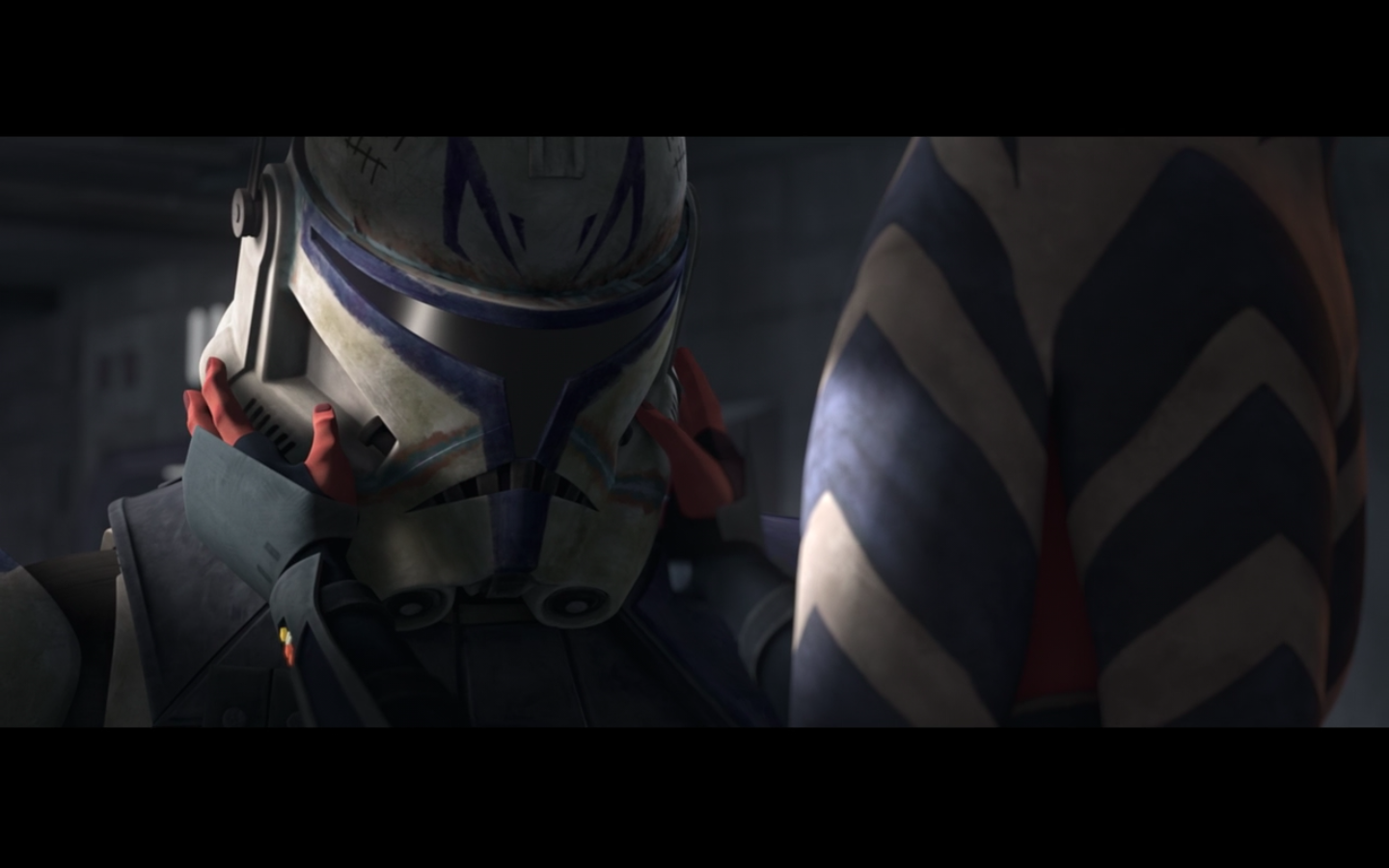 This statement alone embodies what The Clone Wars has always done well. It made us feel for the clones, to understand their perspective and individuality. One last time it does it again, with Ahsoka and Rex deciding that killing the Clone troopers would be a betrayal they don’t want to live with. For Rex, a betrayal to his brothers and comrades; for Ahsoka, a betrayal to her friends and to Rex himself. Luckily though, as often happened on the show, they have a plan crazy enough to work.

Rex walks towards his former allies with his Jedi ‘prisoner’ and tries to reason with Jesse. Dave Filoni teases us a bit with something we’ve all wondered as he makes his case that order 66 was to kill all Jedi but Ahsoka isn’t one and hasn’t been for some time. Jesse falters for a fraction of a second but remains unconvinced saying that it was Rex himself who said they were under strict instruction from Darth Sidious (Jesse directly referencing Sidious is a revelation in itself, meaning either his name was directly encoded into Order 66 or at least the part to not resist a name change in leadership).

All this is just a stall though while the droids dropped the lifts down to the maintenance deck, causing a majority of the clones to be stuck on another level. While the two deflect and stun the final few clones Maul appears and makes a run for the shuttle. As he takes off and is just about to leave Ahsoka pulls a Rey and attempts to pull the shuttle back. Rex is struggling to defend the reinforcement clones pouring in and, in a touching moment, Ahsoka’s droid since the season one, R7, takes a shot meant for her and dies. Rex can’t hold them off alone, so Ahsoka chooses to save him and let Maul escape in the shuttle.

Rex finds a single working Y-wing in the maintenance bay but the two are separated on escape as the now in-atmosphere ship breaks apart. What follows is a beautifully animated sequence where Rex must find a free-falling Ahsoka and have her grab onto the ship and climb inside as they both plummet to the ground. 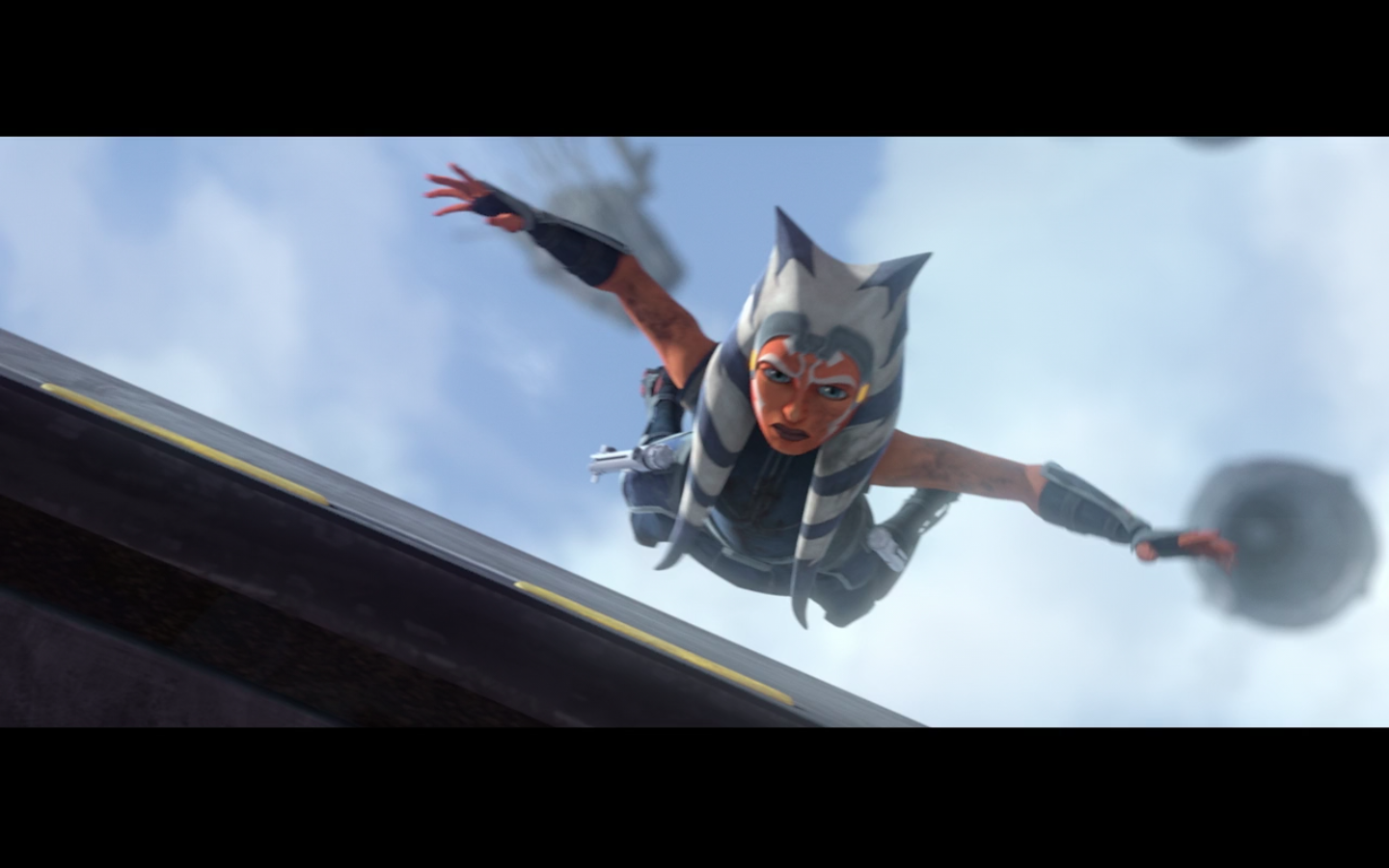 That’s it for the action, and dialogue, of the show. But with the action over the final four minutes of silence in the episode speak to us as loudly as any battle or combat sequence in the series ever has. The silence and simple score create a perfect canvas for us as an audience to draw our own conclusions as to the motivations and feelings behind the characters.

We see Rex and Ahsoka amid the wreckage of the fallen Republic Cruiser, Rex returning to the Y-wing, shovel in hand, while Ahsoka stands, shawl covering her head (mirroring how we see her at the end of Rebels), in front of countless graves of the men she once led into battle and their Lieutenant, Jesse, who we’ve seen as a recurring clone since season 2. 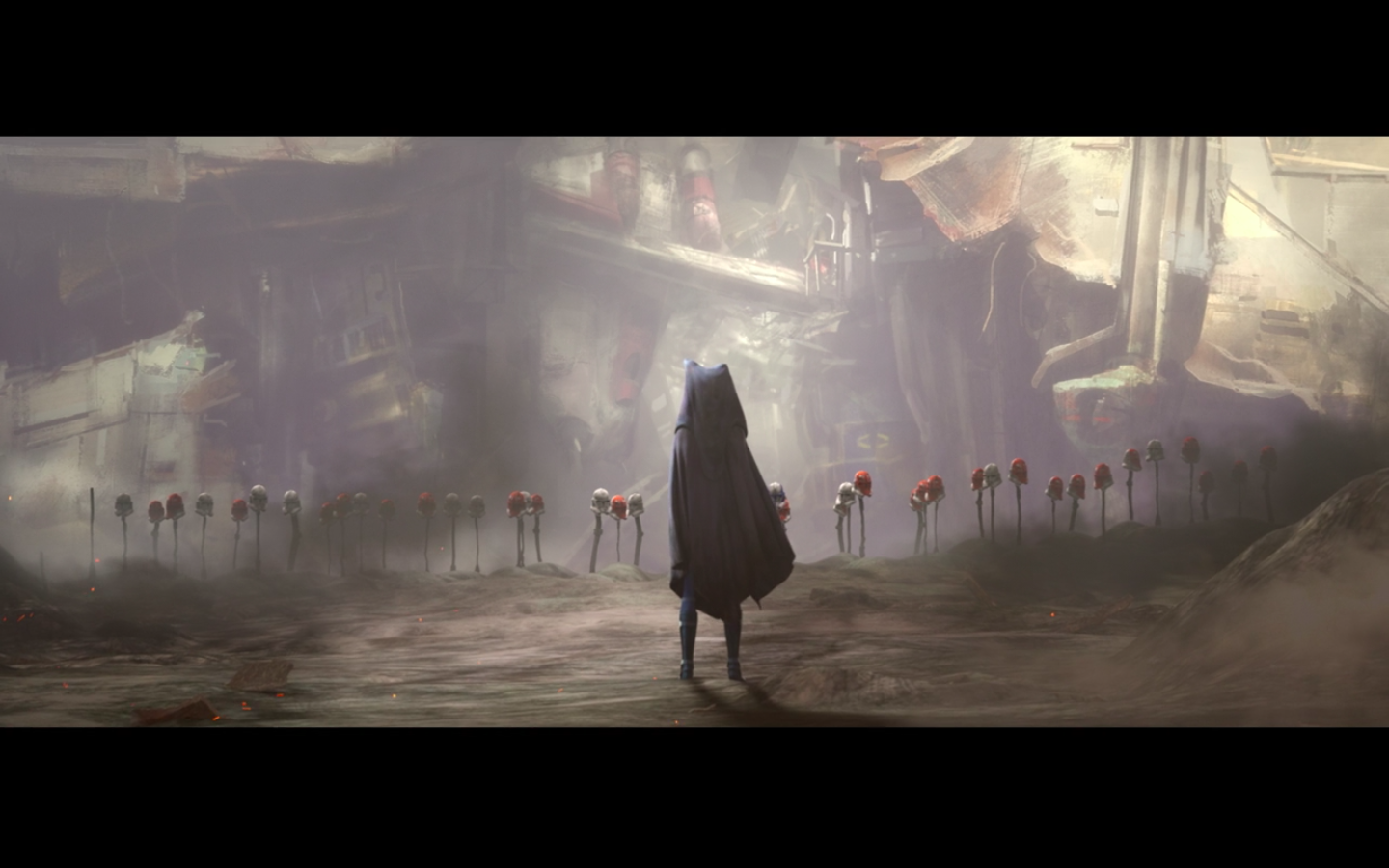 Ahsoka holds her lightsaber once last time, then drops it to the ground. This could be to help fake her own death, because she knows it will be too dangerous carrying a lightsaber going forward, because this is her way of letting the Clone Wars end or even that once again, now without choice, she must renounce being a Jedi. Whatever the mix of reasons this lightsaber, her lightsaber, and along with it that part of her life, is gone.

We skip ahead in time, the Empire is in full swing and winter has fallen over the moon of the crash. An imperial shuttle lands among the Stormtroopers and Snowtroopers patrolling the area. Then, we hear it. The breathing we all know. Darth Vader walks towards the grave, now long covered up, and digs through the snow, sensing what lies beneath. He picks up the lightsaber and examines it, a symbol of his former apprentice and the love he had for her, making his own modifications and matching its blades to his blue. In an amazing shot, he ignites it. 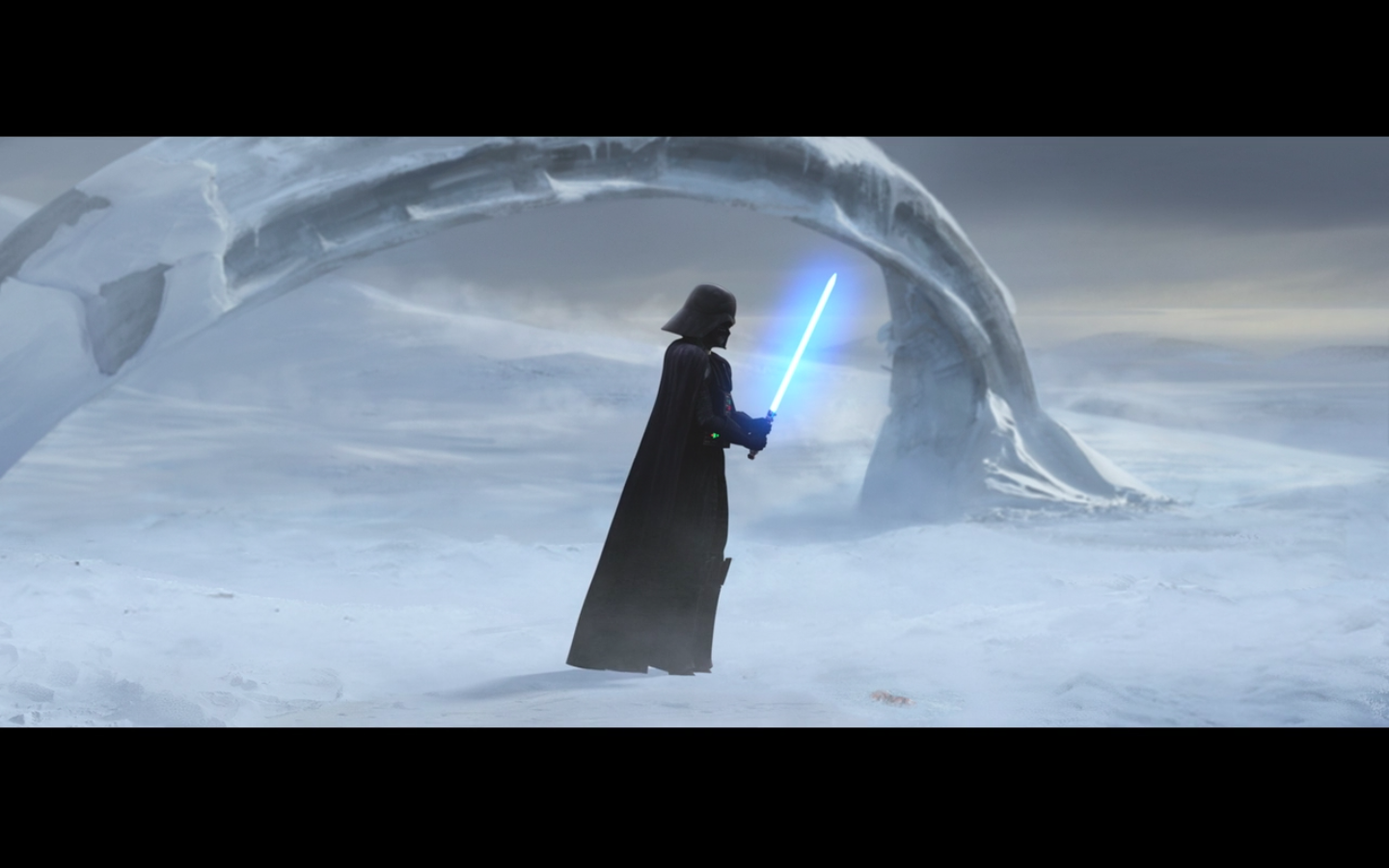 He looks up and sees a Convor flying high above, the bird, seen in Rebels, symbolizing Ahsoka and her connection to the force, an ominous sign to us signaling their destined meeting as Sith and Rebel.

The final shot of Star Wars: The Clone Wars, has the helmet of one of Ahsoka’s Clone Troopers, lying in the snow, and in the reflection, Vader walking away. As I said before, the silence of this scene allows for any number of interpretations. The end of the Clone Wars symbolizes not just the end of the war itself but the end of Anakin, his relationship with Ahsoka, the phasing out of the clones. The finding of Ahsoka’s lightsaber is the death of even more of Anakin as his loss fuels the hatred of Darth Vader. The final shot truly does signify the end of The Clone Wars show for us and, as Vader walks away, the ‘death’ of everything linking him to his former life. 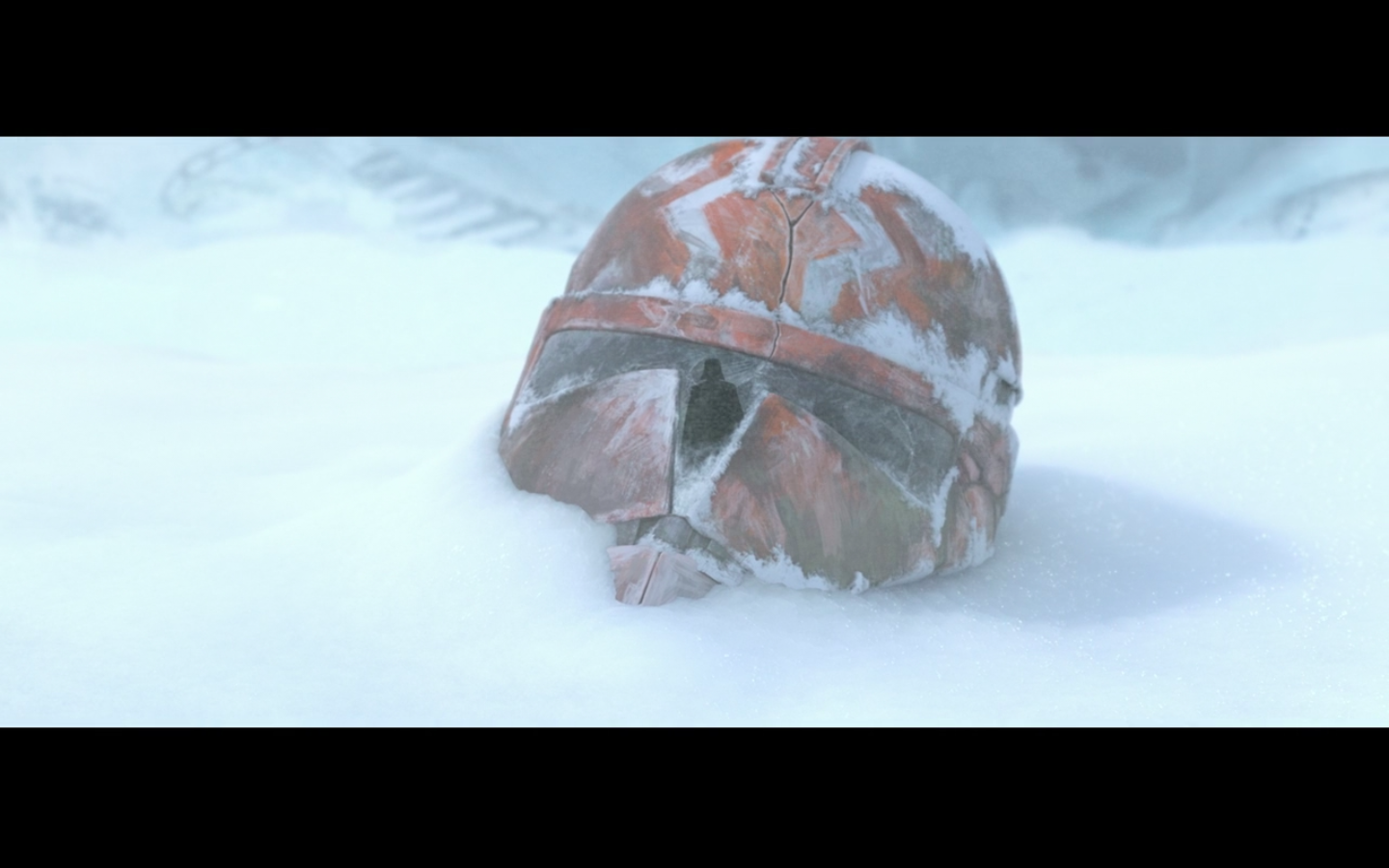 It’s not a complicated episode, but it doesn’t have to be. It doesn’t have the Revenge of the Sith ties part I of the arc had, the lightsaber battles of part II or the impending doom of part III but cramming any of these in may have impeded what we did get, an honest look at how the end of the Clone Wars affected Ahsoka and Rex, the price Ahsoka paid in saving Rex (by freeing Maul and in turn causing the destruction of the ship and death of everyone on board) and a proper closing arc on a TV show we’ve come to love.

On par with the rest of the arc the music is perfect, the animation is stunning (especially the imperial designs at the end) and the action exciting. I can’t wait to watch this entire arc as one big movie. It was a fitting and beautiful end to the arc, to the season and to the show as a whole, I’m so glad we finally got it.

And with that the final episode the show is over. It may have been rocky at times (with the starting 2008 movie unpopular with a lot of fans) but the good far outweighs and forgives any faltering over the years. The show has made its surrounding films better, given us a deeper understanding of Anakin and his descent into the dark side, and with Ahsoka has taken a quippy, children’s character and made her into a fan favorite so popular she’s making the once impossible leap into the live action TV shows. We owe a lot to the show, we have the amazing Mandalorian now but for a long time it was the pillar of Star Wars on TV and I’m grateful to Dave Filoni and the whole team for all the effort and love they’ve put into this show.

The Clone Wars stories aren’t completely over though, we have an anthology book of Clone Wars short stories releasing later this year and the first issue of Star Wars Adventures: The Clone Wars – Battle Tales due out later this month, part of a five issue comic book mini-series.

I hope you all enjoyed the episode as much I did and until next time: Happy Star Wars day and may the Force be with you, always.