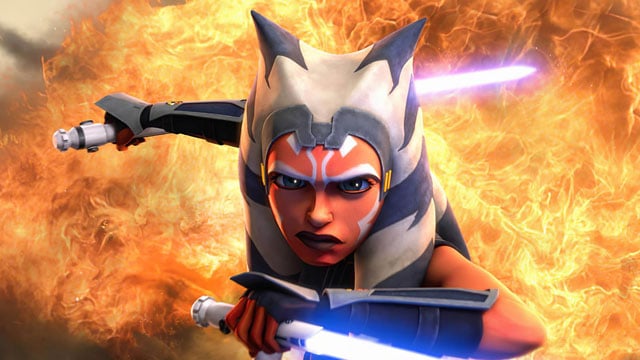 As Star Wars: The Clone Wars reaches the conclusion of its Siege of Mandalore storyline, some new merchandise may hint at a major cameo in one of, or both of, the last two episodes of the season. Possible spoilers ahead!

Fashion line Her Universe (AKA Our Universe) has revealed a brand new bit of Star Wars merchandising in association with BoxLunch Gifts: a new dress styled after the appearance of Darth Vader. In and of itself, this would not be too newsworthy… But the thing is, the dress is specifically associated with The Clone Wars, hinting at a connection between the product and the show. More intriguing is the official description, which heavily suggests that Darth Vader will be appearing at the very end of the series:

“Show your true allegiance to the dark side of the Force in this athletic jersey tank! Darth Vader makes a statement in Star Wars: The Clone Wars, just like this tank will in your closet.”

Darth Vader has technically appeared in the series before. In the Mortis Arc showcased in Season 3, the Dark Side entity known as the Son briefly converted Anakin to his side with visions of the tragedy that would be in store for him if they didn’t work together to escape the planet, culminating in a smoky, shadowy outline of Darth Vader’s helmet (seen above). Anakin is eventually freed of this brainwashing, but he loses his future knowledge of these events in the process, fulfilling them. This, however, would take things a step further, allowing us as an audience to see Darth Vader fully realized in the best-looking iteration of The Clone Wars‘ art style as the events of the show progress through the events of Revenge of the Sith – and possibly even past it.

But could this really be a hint that we’ll see Anakin Skywalker as Darth Vader at the close of the narrative to The Clone Wars? Maybe. It could also be a case of marketing mislabeling something. For instance, Hasbro produced toy vehicles of the Slave I, Boba Fett’s ship, early on in the Disney era. Those specific toys were released with Star Wars Rebels packaging, but that was a show in which he did not appear in. Nonetheless, this is a product explicitly tied to Her Universe, Ashley Eckstein’s fashion line, and given that she’s the voice of Ahsoka Tano, she is likely filled in on the specifics of how The Clone Wars ends. There’s only about an hour of content left, so whatever Darth Vader’s presence in the show is – or lack thereof – is going to be known to us viewers soon enough.

The majority of the last few episodes of Star Wars: The Clone Wars are airing on Disney+ right now, with a new episode to arrive in a week and the finale targeting May 4. The previous six seasons are available to watch on the streaming service in their entirety.