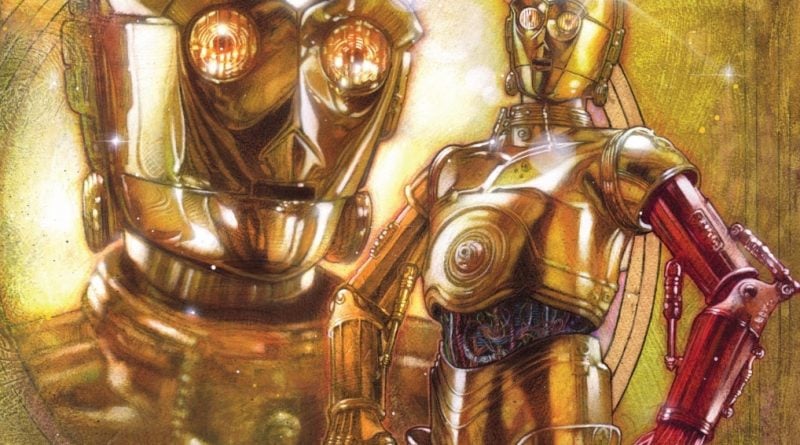 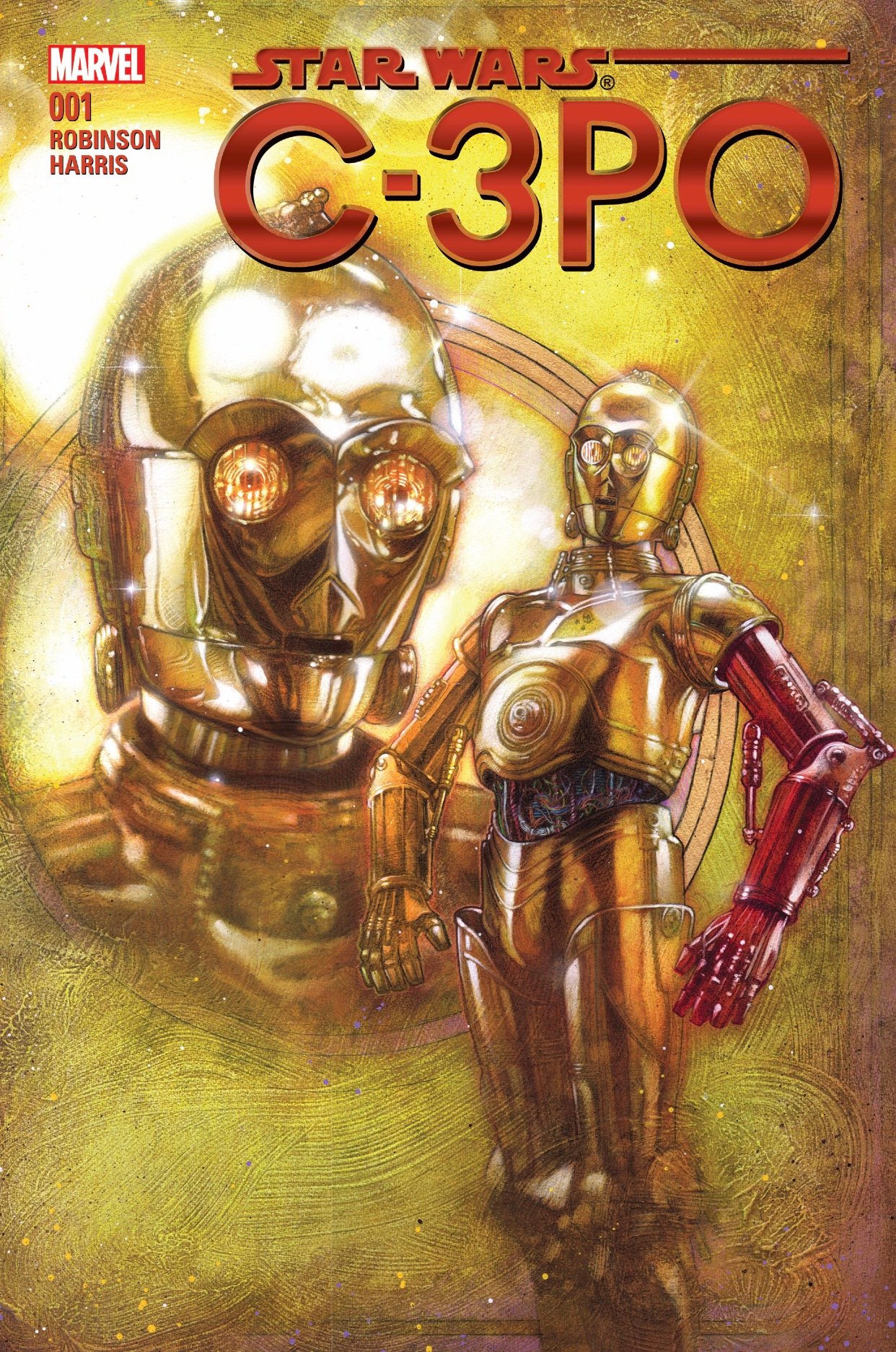 Welcome to the Retro Reviews! Until we get some new comics to dive into, expect these weekly reviews of some of our favorite issues from the Marvel run of the last six-years! My first pick: The one-shot C-3PO, released in April 2016, intended to tell the story behind Threepio’s red arm in The Force Awakens. Remember how much we speculated what the red arm could mean? Oh, we were so young and innocent back then. But it does turn out the red arm has a both a significant meaning and a very touching story behind it.

Droids are the first beings many fans met in the Star Wars saga. Speaking for myself, I often wrote the neurosis of Threepio and the saltiness of Artoo as comic-relief only and nothing more. That’s exactly what George Lucas intended them to be in his films, most dubbing them the “Laurel and Hardy” in a galaxy far, far away. But, these droids were different than most artificial life portrayed onscreen before 1977. Whether you think of the cold, emotionless HAL-9000 from 2001: A Space Odyssey or The Robot from Lost in Space, these two examples of the era don’t emote much in their roles. With Threepio and Artoo you get a range of fear, courage, laughter, and even anger. George Lucas may have intended for them only to be comic-relief or utilitarian, but he gave them souls. These droids have souls but I often overlooked that aspect because I regarded their mechanical presence as less than their organic counterparts. Writers across the post-Disney canon have shattered that notion for me and I distinctly remember this one-shot comic having a profound impact on the way I began to appreciate droids more in Star Wars.

The beats of the plot aren’t terribly important. Threepio and his retinue of droid spies (we learn later in the Poe Dameron comic Threepio has a network of Resistance droids feeding him information) crash land on a harsh, desolate planet called Taul. With all the organic beings aboard killed in the crash, the droids must work together to survive. Not a terribly original plot, but there is an element of urgency facing Threepio and his companions: Admiral Ackbar is being held captive by the First Order, facing a brutal interrogation, and they must get his location to the Resistance so they can begin a rescue operation. Threepio also faces another dilemma of what to do with a First Order droid named Omri, who they captured but survived the crash. Threepio and Omri end up agreeing to temporarily set this adversarial relationship aside in the interest of mutual survival. The droids set off across the wasteland of Taul in search of a wrecked First Order vessel equipped with a functional homing beacon they can use to contact the Resistance. 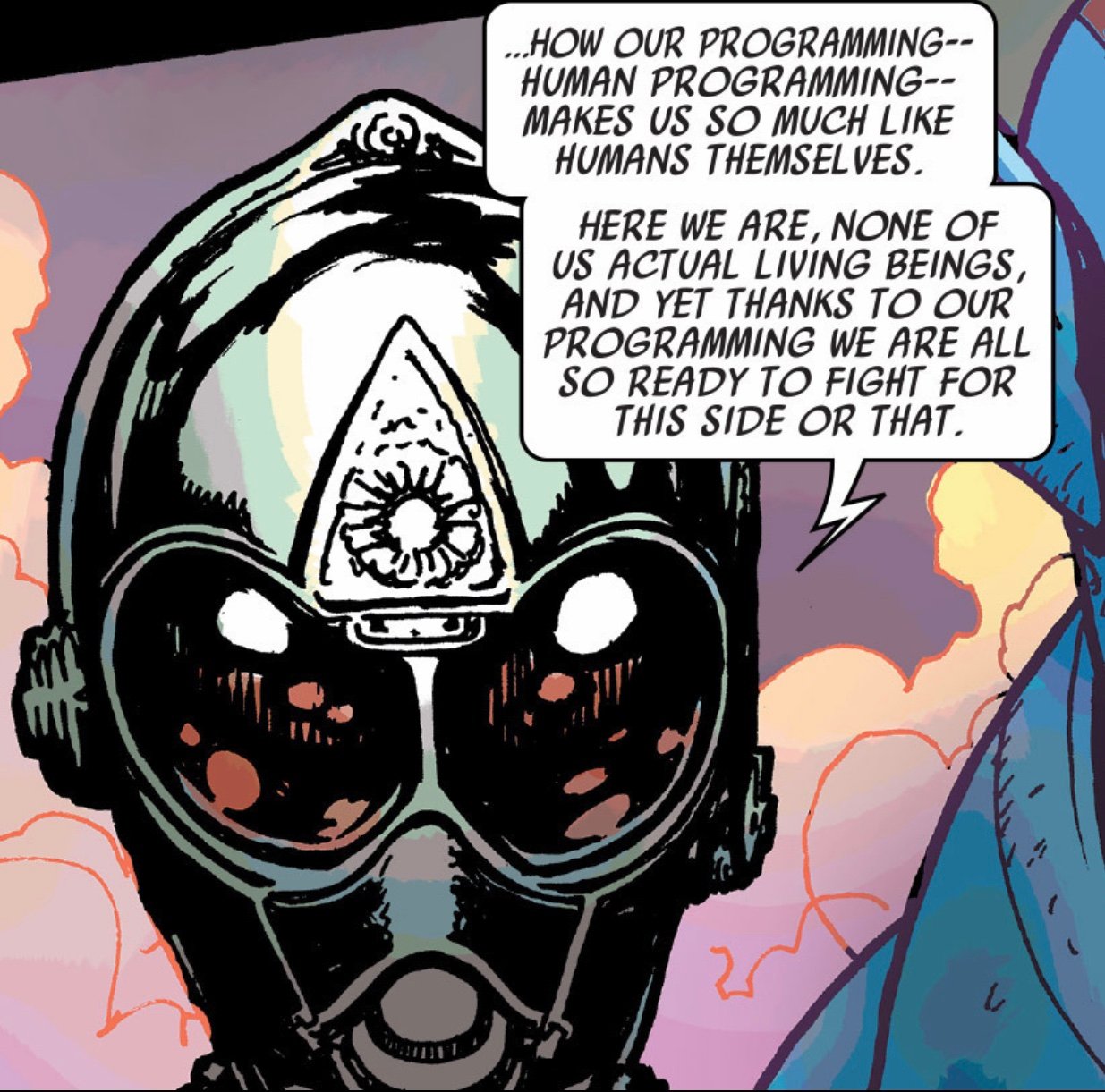 The plight of the droids is not nearly as interesting as the existential conversations shared, beginning with Omri stating they could just as easily be serving the First Order. Omri isn’t quite the advocate Elthree was in Solo, but he makes a the point of how droids souls are malleable to whomever they serve due to the restraints of their programming and their organic masters ability to wipe their minds. Threepio and the other droids do a bit of pearl-clutching, stating the righteousness of their programming because they serve the Resistance, but Omri seems content in having made his point that droids can have a more difficult time finding morality. Droids are often robbed of agency because any sense of them is usually tailored to whomever they serve. Omri isn’t trying to dodge responsibility or defend the First Order, he’s just making a point they all share this existence, perhaps subconsciously suggesting they shouldn’t be as judgmental of him as they are. 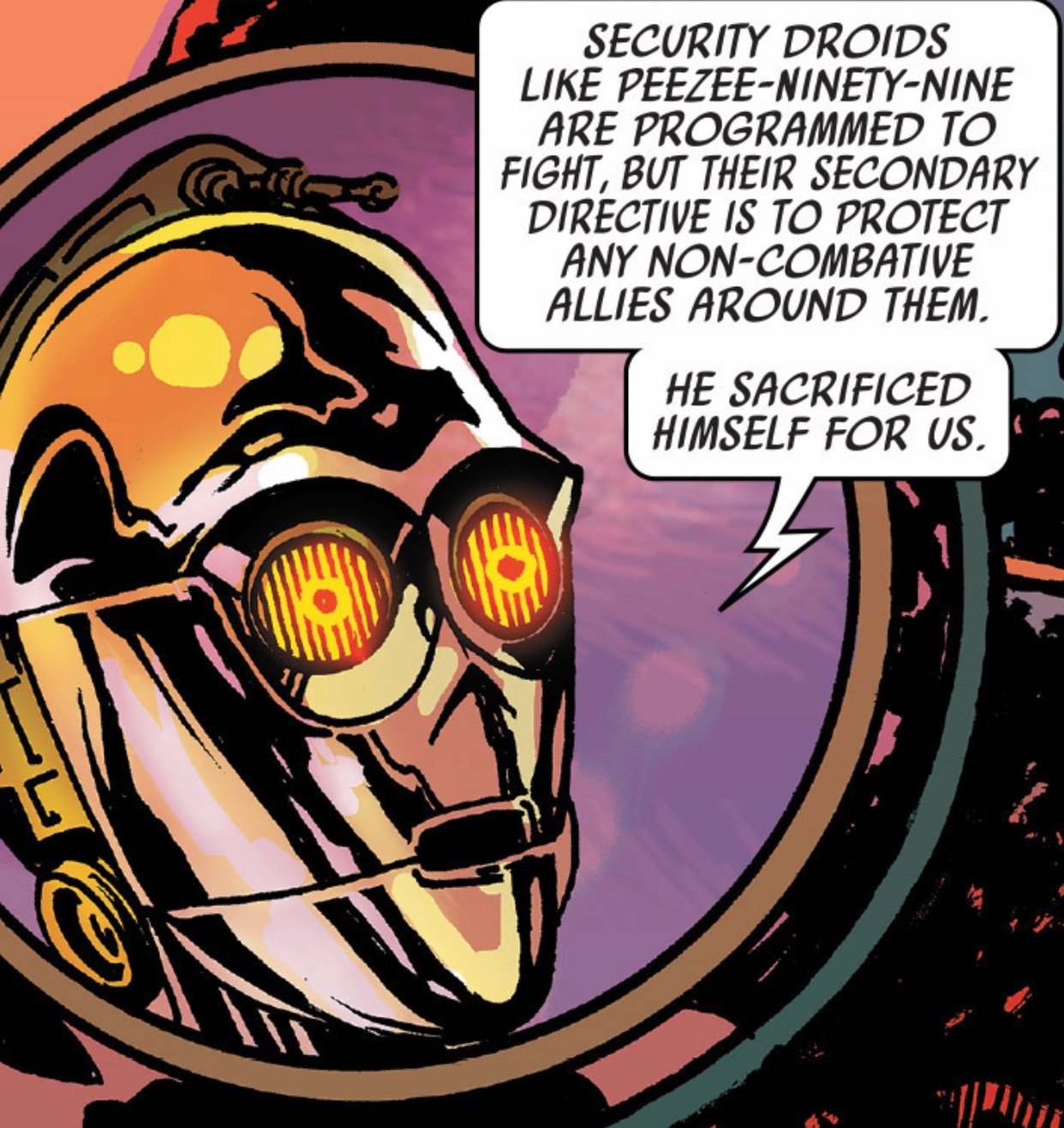 The sense of a bond appears very quickly as the droids are attacked by some indigenous spider creatures. The security droid among the group, PZ-99, stays behind to give the rest of the droids cover. While Threepio acknowledges both the programming and the sacrifice, Omri expresses disdain for the fact the PZ-99 stayed bound to his programming rather than try to save himself while fleeing with them. Later, when the droids find shelter in a cavern, Threepio digs a little deeper into the existential observations Omri’s been making during this perilous trek. Omri suggests he and Threepio are cursed, due to the element of sentience they’ve been given to make them more relatable to the organic beings they serve. Omri suggests they’ve both had their memories wiped at one or more points in their existence and poses the question of how they can ever know what role they played in the life of the galaxy.

As the droid contingent continue their trek, more obstacles take their toll on their numbers, until only Threepio and Omri remain. Threepio lost his arm but managed to survive. Omri continues to muse on the life of a droid, noting the “youth” of those lost on their journey and the age of both he and Threepio. For all they know, each of them could’ve had thousands of near death experiences and survived them, but much like Threepio’s arm, those memories were taken from them to be replaced by something else given to them by their organic masters.

It is said that a being who loses a limb sometimes feels as if that limb were still attached to the body and can be moved. A phenomenon known as a phantom limb. Having had my memories erased is like having a phantom limb inside my memory banks.

James Robinson’s writing in this book is sublime, especially the conversations between Threepio and Omri. Threepio gets a moment of introspection, seemingly pulling back the veil on moments buried within his mind for the first time. The art of Tony Harris gives this book a dreamlike quality which goes well with the themes of the conscious and unconscious mind Omri invokes in conversation. I wonder what kind of emotional responses these images stirred within Threepio or if he had any idea what he was seeing and how it related to the state of the galaxy. Threepio and Artoo are the only beings to bear witness to the entire Skywalker saga, so I wonder if more memories broke through after this. 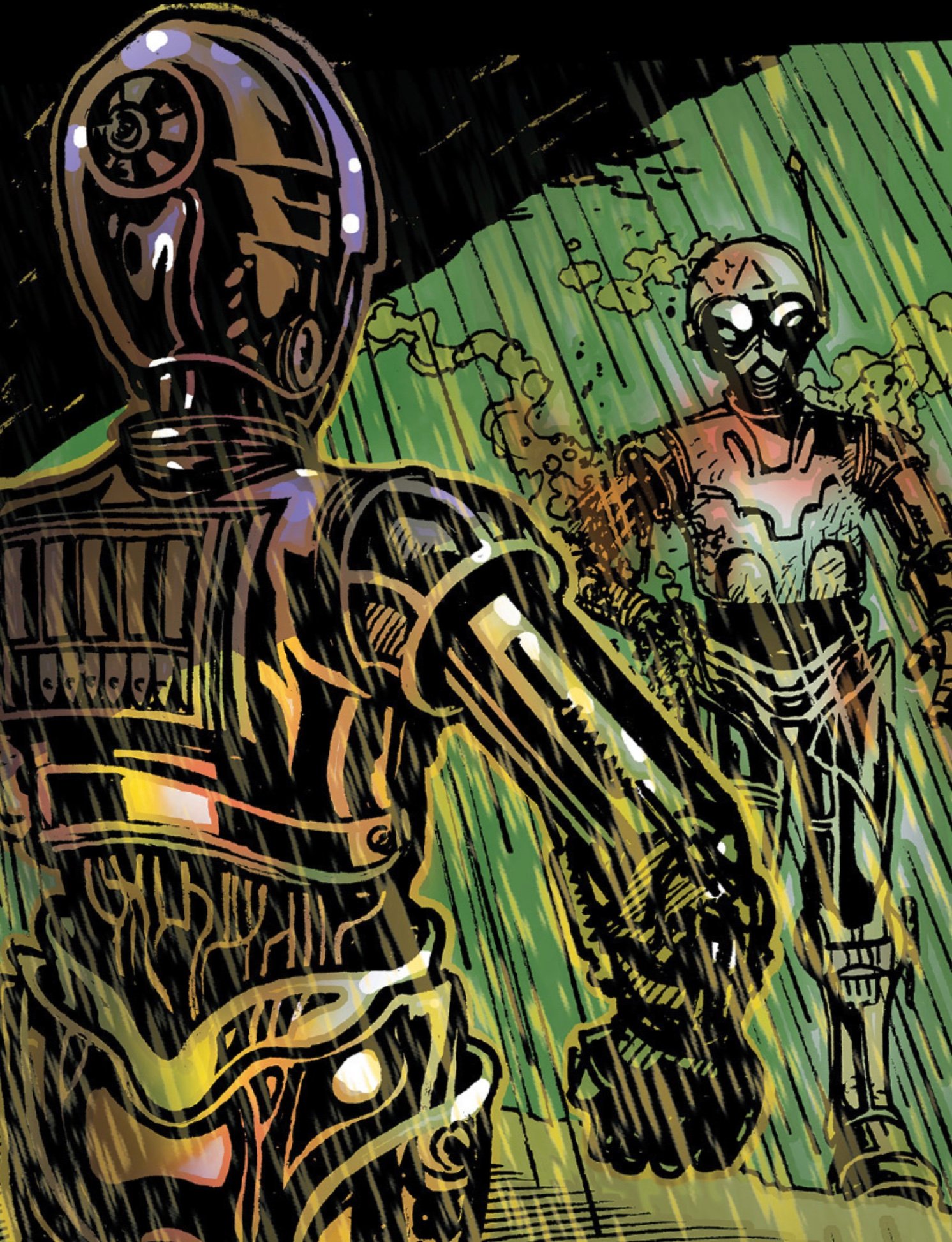 Unfortunately, Threepio doesn’t get a chance to respond to Omri. A storm of acid rain descends on them and they quickly seek a precarious shelter. They’ve finally reached the downed First Order fighter containing the beacon they need, but it’s just beyond their shelter and the rain will destroy them if they try to reach it. Omri realizes the ship itself will be destroyed  by the rain, as well as the beacon. Having witnessed the other droids self-sacrifice, Omri chooses to act and leaves shelter for the downed ship. Threepio wants to stop him, but Omri refuses. He’d rather sacrifice himself for the friend he found in Threepio than serve another master, whether it be the First Order or the Resistance. With Threepio’s survival, perhaps Omri feels his life will live on in the memories of Threepio and it’s his way of passing on the lesson of how much a droid’s agency should matter – especially when it comes to their memory. The acid rain strips Omri down to the red primer he received upon his creation, which seems to amuse him at the very end. Threepio retrieves a single red arm, just before Poe Dameron and BB-8 arrive. 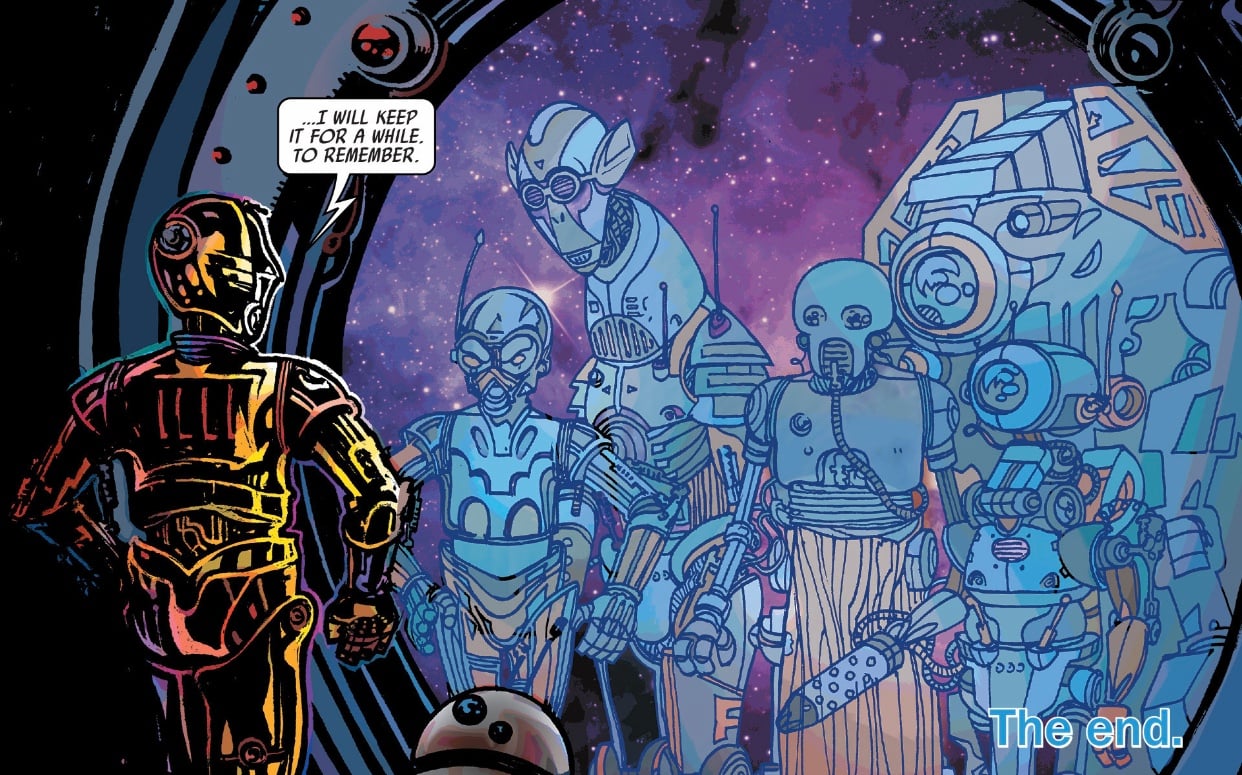 Threepio attaches Omri’s red arm to replace his lost one, a way for him to honor his new friend and the other friends he lost. The phantom limb is cured by Omri and it will most likely help remedy the other parts of Threepio which have been taken from him. Omri reminds us no one is ever really gone, no matter what parts of them someone tried to erase. The souls of droids endure.

It was such a pleasure to revisit C-3PO. I’d forgotten how touching and well-written it was. James Robinson crafted something of a mini-hero’s journey for Threepio, with Omri as the wise sage guiding him in the physical and spiritual worlds. The art by Tony Harris mirrors these haunting words in it’s shadowy tones, making economy of the various colors. While some pages look like tapestries, others look like stark dreamscapes on the border of nightmares. There is a level of mysticism to this book and it did so much to kick-off some of the great droid stories which followed. If you have this on your shelf I highly recommend revisiting it. When I first reviewed it we weren’t using scores. I’m happy we are now. 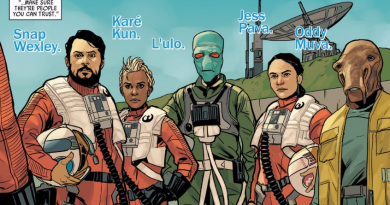 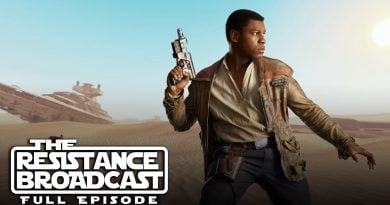 The Resistance Broadcast – Why Does Everyone Want to Go Back to Jakku? 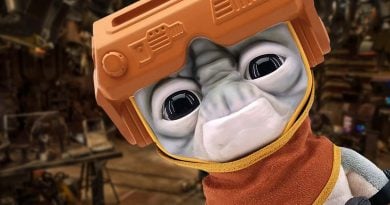