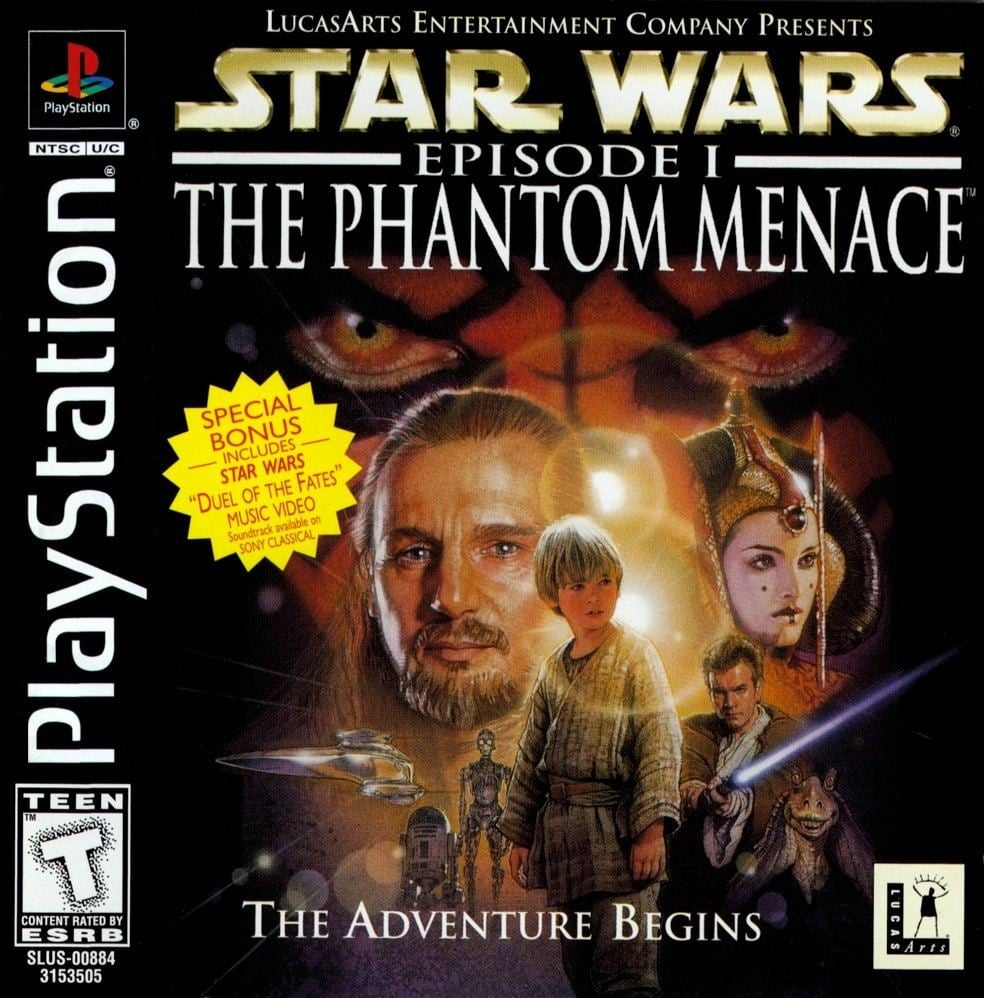 The year is 1999 and the long-awaited Episode I has just hit theaters. The film is expected to be a huge success, so LucasArts has released a movie tie-in game developed by Big Ape Productions (Herc’s Adventures). The game is met with generally positive to mixed reviews and ends up being a financial success. Some players are, however, left puzzled by some of the design choices. The Phantom Menace is a weird video game.

Almost every Star Wars fan has heard of or read about this game. And those who played it found themselves frustrated by its difficulty and odd mix of genres. The Phantom Menace is accurately described as an action-adventure RPG video game, which was something kind of complex back then. Most tie-in video games were fairly straightforward and accessible, but this project took a somewhat convoluted route: the idea was to present a larger action-oriented game world that featured freedom of movement and heavy RPG elements. The top-down camera made the action hard to follow, and the RPG systems blurred the line between genres and demanded players to explore and deal with the consequences of their actions quite often. It was not easy to pick up and just play. 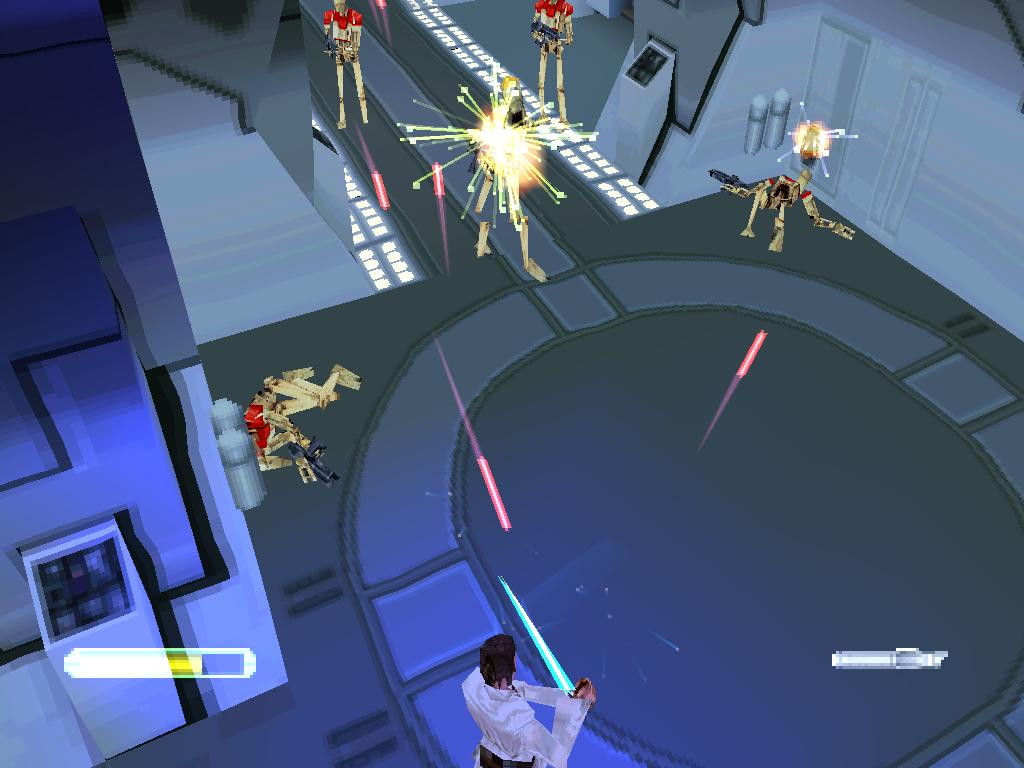 On top of that, the lightsaber fighting mechanic is shallow and feels like swinging a baseball bat around in hopes of eventually deflecting a blaster bolt back to the shooter. The attack button is the defense button. There is no separate blocking action whatsoever. You spend most of the game playing as Obi-Wan Kenobi and Qui-Gon Jinn, but your Jedi powers are limited to weighty jumping (which is made harder by the camera), weak Force pushes, and awkward lightsaber-swinging. Not the Jedi fantasy many fans were hoping for.

So… why is this game worth revisiting? Well, it actually managed to hit many notes right and dared to push the envelope in many ways. It is an imperfect act of courage. LucasArts tried to deliver something that honored the film it was based upon while also subverting the expectations of players who wanted something in the vein of Jedi Knight (1997). I cannot tell you how many times I got stuck in just the first two levels, but every bit of progress was rewarding. The game is littered with puzzles and interesting (and often funny) character interactions, and it rarely sits on a level structure or game mechanic for too long. Big Ape Productions kept things interesting throughout the whole journey. 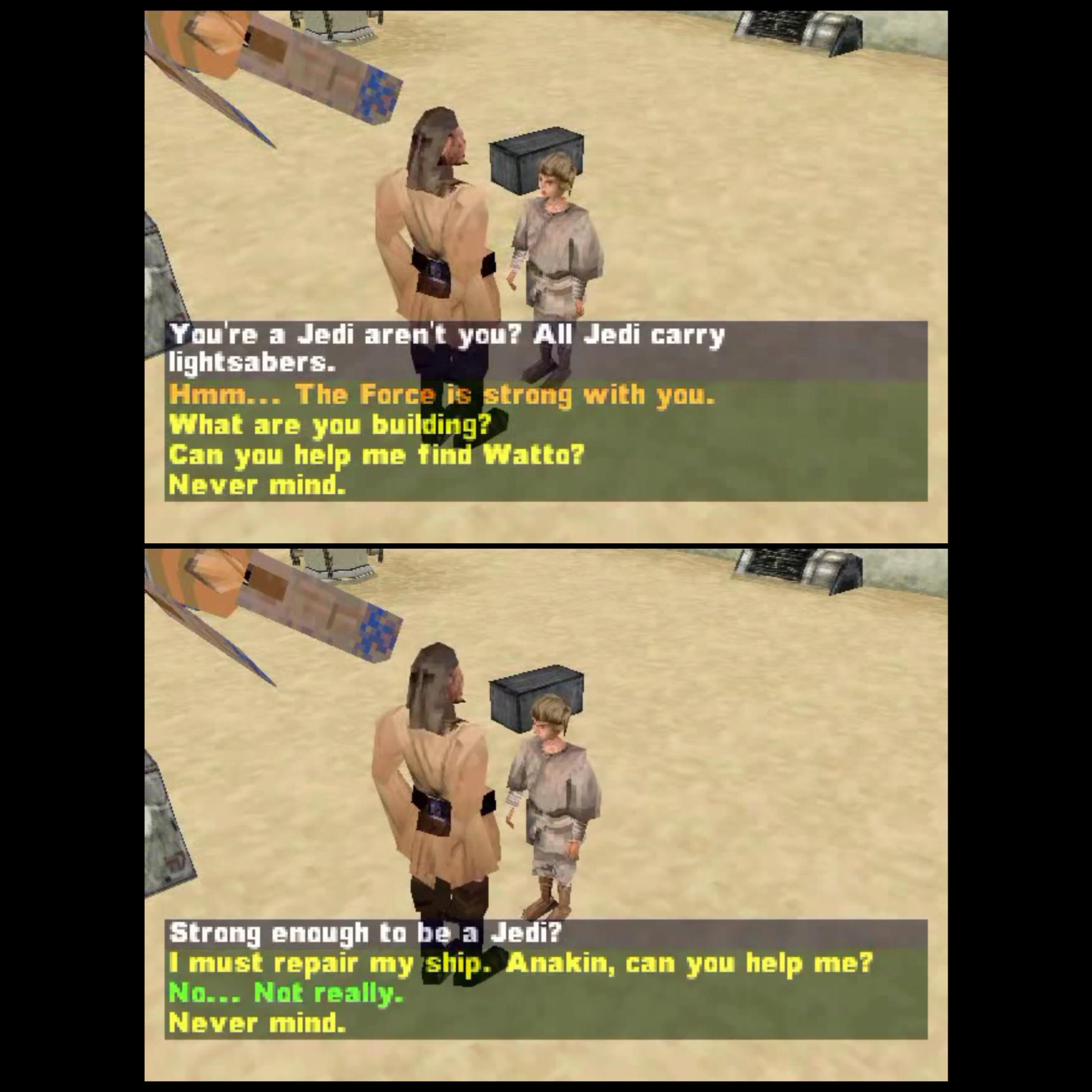 Despite its heavy focus on talking with NPCs, making choices, and exploring every nook and cranny of the levels, the characters do not evolve in any way (as in getting new skills or improving existing ones). There are, however, plenty of items and weapons at your disposal: blasters, rocket launchers, thermal detonators… Obi-Wan would not approve of using such a vast array of guns and explosives, but the game constantly forces you to snipe enemies from afar or clean rooms full of droids instead of actually following “the Jedi way”. So uncivilized.

When it comes to following the film’s storyline, the game is as faithful as it could be while expanding the scope and creating new situations. The main story beats are all there. But there is a lot more bribery and mind tricks involved. A lot more. The Otoh Gunga and Mos Espa levels are a riot (and downright hilarious if played wrong). When I said players could face the consequences of their actions, I really meant it. The game even has dialogues and scripts in place to lock you out of completing the mission if you embrace your inner Sith and murder Anakin’s entire neighborhood.

Without going into spoilers (game spoilers, I mean), the game takes a turn following the Tatooine levels, which are arguably the biggest and most complex, and puts you in the shoes of Captain Panaka and Queen Amidala for a while. It is a refreshing change of pace before the final duel with Darth Maul (may the Force have mercy on your soul). 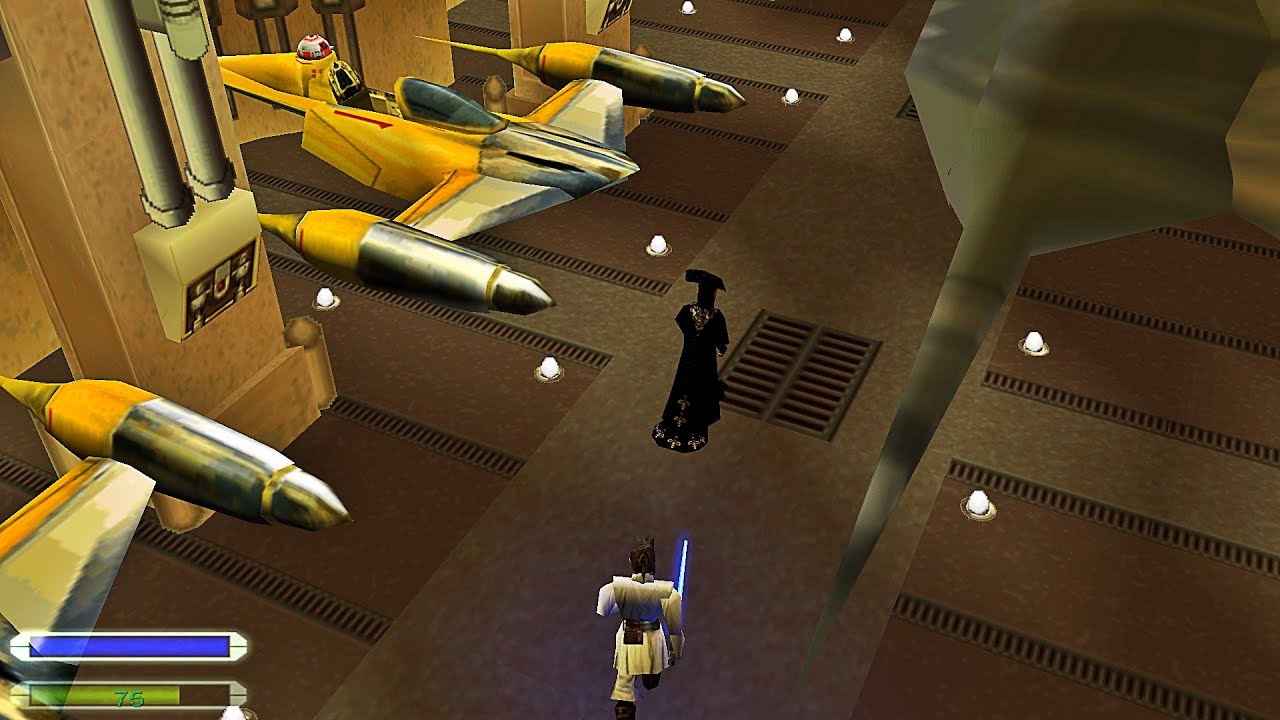 The Phantom Menace released on PC and PS1. To this day, I believe it is one of the finest looking games of that generation. Of course it looks like a bunch of pixels and jaggies in this day and age, especially to younger gamers, but it sure was a looker back then; its models and attention to detail (they really tried to capture the look of the film) are worth applauding and way above what other bigger contemporary games achieved. As many gameplay-related problems as it has, this take on the first episode of the Skywalker saga is an anomaly worth visiting at least once. You will not find fast-paced action or exciting adventuring in it, but I promise you it feels unique. If the difficulty is too much for you (it was for me), you can use cheat codes to peacefully walk through the levels and utterly destroy Darth Maul. Just saying.