Editorial: What’s on Vader’s Playlist? – a Look at the In-Universe Music of Star Wars 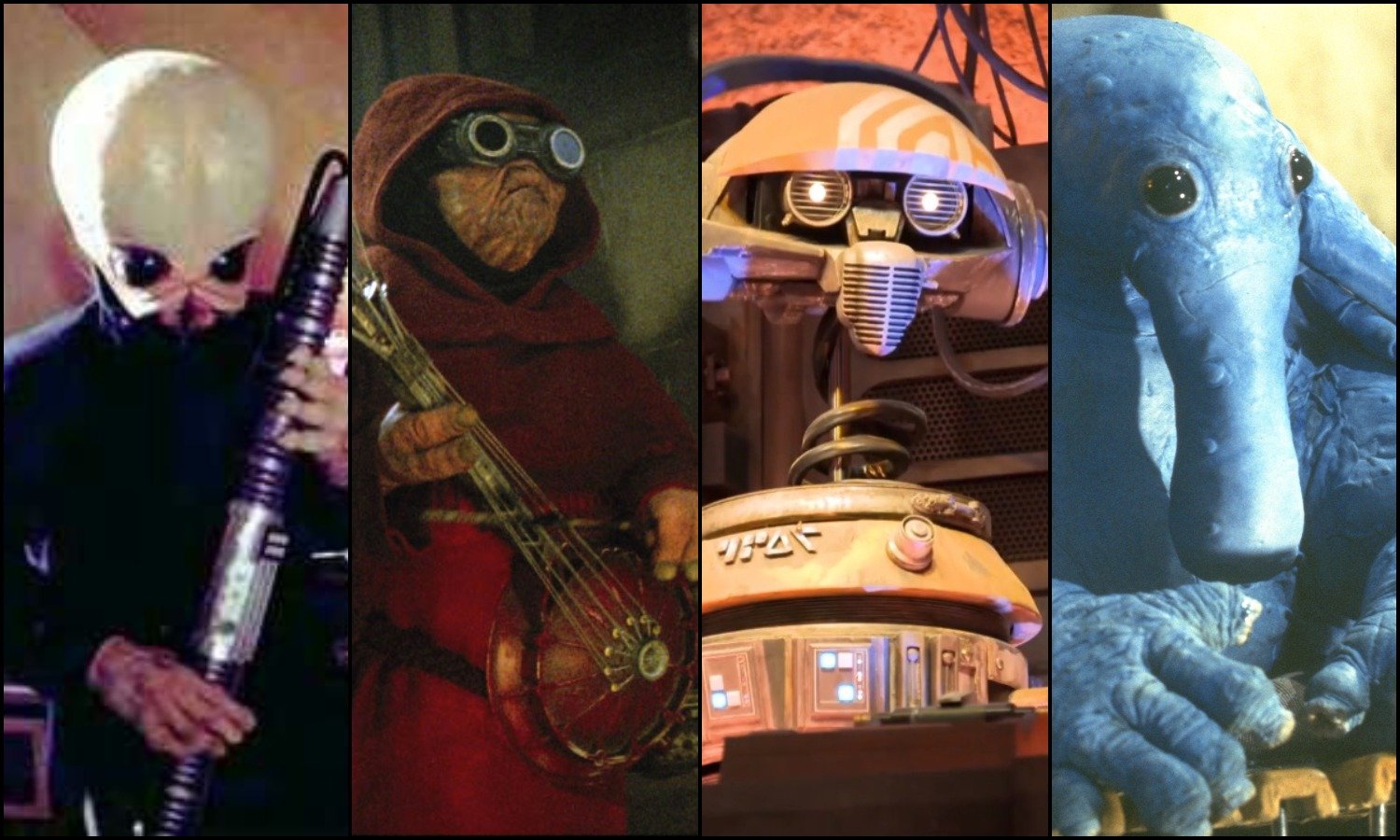 No one can deny the appeal of John William’s beautiful Star Wars score, unfortunately though, the characters aren’t listening to the same thing we are. Obi-Wan wasn’t humming along to ‘Duel of the fates’ as he battled Darth Maul, Luke didn’t chuck ‘The Force Theme’ on the ol’ iPod and then stare at those twin setting suns, and Vader wasn’t listening to the ‘Imperial March’ to get motivated for his morning workout.

So what are the inhabitants of the Star Wars galaxy listening to?

Star Wars has always had a bit of a weird relationship when it comes to canon in-universe music (known in literary terms as diegetic music); whereas, for example, Lord of the Rings has the songs literally written into the books and Star Trek is set in the future so can draw from real music, Star Wars has always had to create from scratch while also adhering to that Star Wars ‘sound’ fans know but can’t necessarily define.

So let’s find out what we do have, first we’ll look at examples we can listen to, then the ones described in text.

We start off with Mongolian Rock throat singing band: The Hu.

In the opening scene to 2019’s Star Wars Jedi: Fallen Order video game, we see our protagonist, Cal Kestis, working for the Scrapper Guild on Bracca. We hear a hard hitting metal track with deep vocals in an alien language as we track over the shipyard and zoom in on Cal busy welding.

His friend, Prauf, gets his attention, Cal takes off his headset, and the music fades to background, a classic technique to show the audience is hearing the exact same music the character is. The video below showing the band performing it in the studio is a treat.

It’s amazing seeing someone sing in a Star Wars language with a fully fledged song (the language used was a collaboration between the band and the games creators). The song is called Sugaan Essena, which translates to ‘Black Thunder’. The song is heard later in the game with Cal remarking ‘Hey, I recognize this band’.

Next: a classic band we all know and love: Figrin D’an and the Modal Nodes a.k.a The Cantina Band with ‘Mad About Me’ (If you’re not logged into Spotify it’s only going to play 30 seconds but that’s enough!)

This is our first ever look at diegetic music in Star Wars as Luke and Ben stroll into a crowded Mos Eisley Cantina. Not even a wretched hive of scum and villainy could keep this band from playing some sweet tunes.

However, the dubiously canon short story collection ‘From a Certain Point of View’ reveals that the band were only meant to be on Tatooine for a week but ended up there for a whole year due to Figrin D’an being in debt to Jabba!

Speaking of Jabba that brings us to one of the next big musicians. The late, great, definitely not a blue elephant, Max Rebo! 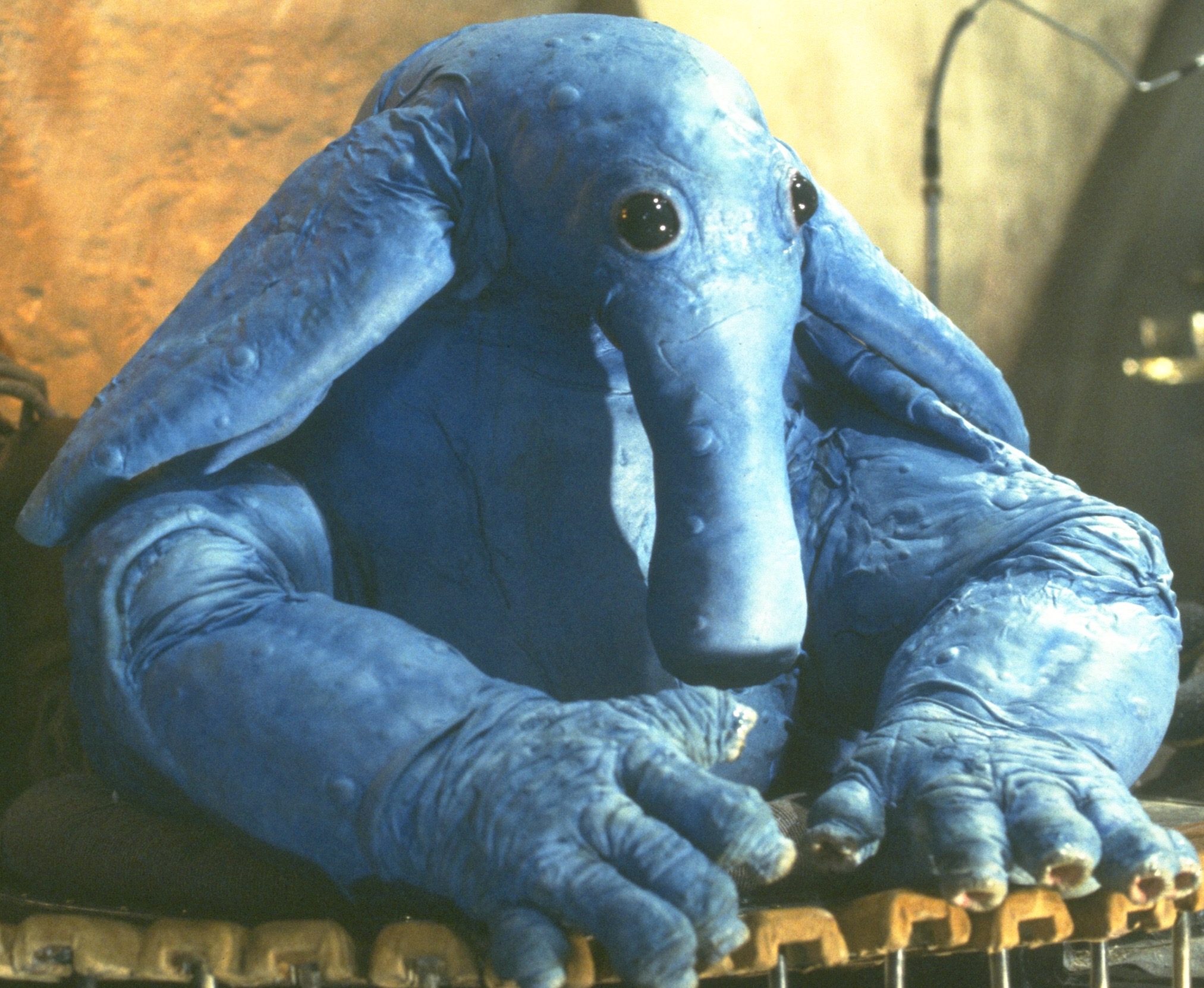 The Max Rebo band perform early on in Return of the Jedi with ‘Jedi Rocks’. Although, prior to the 1997 special edition of the film, they were playing one of their other hits, ‘Lapti Nek’.

Say what you will about all the CGI edits and additions to that scene but ‘Jedi Rocks’ could blow the roof off Jabba’s sail barge all by itself.

If you haven’t listened to it recently here it is:

A few fun facts about the band: The lead singer is Sy Snootles, she appeared in season three of the Clone Wars and murdered her former lover and Jabba’s uncle, Ziro the Hutt. The male lead is Joh Yowza, who found his way to Batuu (the location of Disney World’s Galaxy’s Edge) and performed at Oga’s Cantina, and finally, speaking of Yowzas, one of the band’s members is called Droopy McCool.

Enough with the Original Trilogy, lets move onto something newer.

Star Wars loves recurring themes and throwbacks, none so more than our heroes walking into the local watering hole, usually for information.

Which brings us to The Force Awakens. Han and Chewie take the team to Maz Katana’s castle. Upon entering we are greeted with a scene similar to the cantina in A New Hope.

The song as we enter is performed by a group called Shag Kava and is called “Jabba Flow’. The song has a bit of a Star Wars reggae feel to it, and this is no accident.

Written by none-other than Lin-Manuel Miranda, creator of Hamilton, Miranda used a glossary of Huttese terms to translate, he compared the final lyrics to mirroring one of Jamaican Reggae star Shaggy’s most famous songs.

‘Oh Jabba, No bata tu tu, muni, muni’ translates to ‘Whatever it is, I didn’t do it, lover, lover.’ Which, unless you’ve been living in carbonite since the year 2000, sounds awfully close to ‘It wasn’t me’.

Other honorable mentions include:

-The silky song ‘Chicken in the Pot’ featured in Solo, named after composer John Powell saw a sketch of the singer and thought that’s what they resembled (Even though that singer isn’t featured on the soundtrack version):

-Zeb from Rebels kicking back and listening to a 70’s rock guitar ballad:

Now while these are all interesting stories both in front of and behind the camera, it still doesn’t tell us a lot about the characters. Yes, we’re hearing the same music as them but in influencing and defining them it may as well be just the audience listening; novels and comics are where we really get that insight.

Lets look at a more personal connection between the people of the galaxy and the music they create/listen to.

“Why am I involved in the Rebellion?…The Empire killed my mother over a song.”

Music conveys emotion, it’s one of the reasons it’s universal. Songs make you feel, and that’s what makes it so powerful. It’s used by composers to communicate how to feel while watching something, and it’s used personally to affect mood.

To bring motivation, joy and even sadness to the forefront. The power it has can spark protest and cause rebellion. As is their way, the Empire wish to crush that spark.

In Kevin Hearne’s Heir to the Jedi novel Luke Skywalker is teamed with fellow Rebel Nakari Kelen on a rescue mission. Luke inquires into her motivations behind joining the rebellion and she confides that her mother wrote and recorded a political protest song with her band ‘Hakko Drazlip and the Tootle Froots’. In punishment, the band was sentenced to work in the spice mines of Kessel.

“Depends on your access to declared contraband. It was called ‘Vader’s Many Prosthetic Parts.’ ”

“Hey, I do know that! Hilarious song!”

We learn not only one of the methods the empire uses to stop dissent but also the widespread reach of contraband. Whether through banned holonet channels or from a fellow rebel, Luke Skywalker, on the outskirts of the galaxy,  was able to hear a banned political protest song about his dad’s limbless existence.

Mirroring real life, music is important to so many cultures and is a way to define them. Grand Admiral Thrawn believed the art of a culture could be studied to learn even their military strategies. So it’s no wonder that after the destruction of Alderaan, Princess Leia wanted to rescue and preserve as much of her home culture as was left. 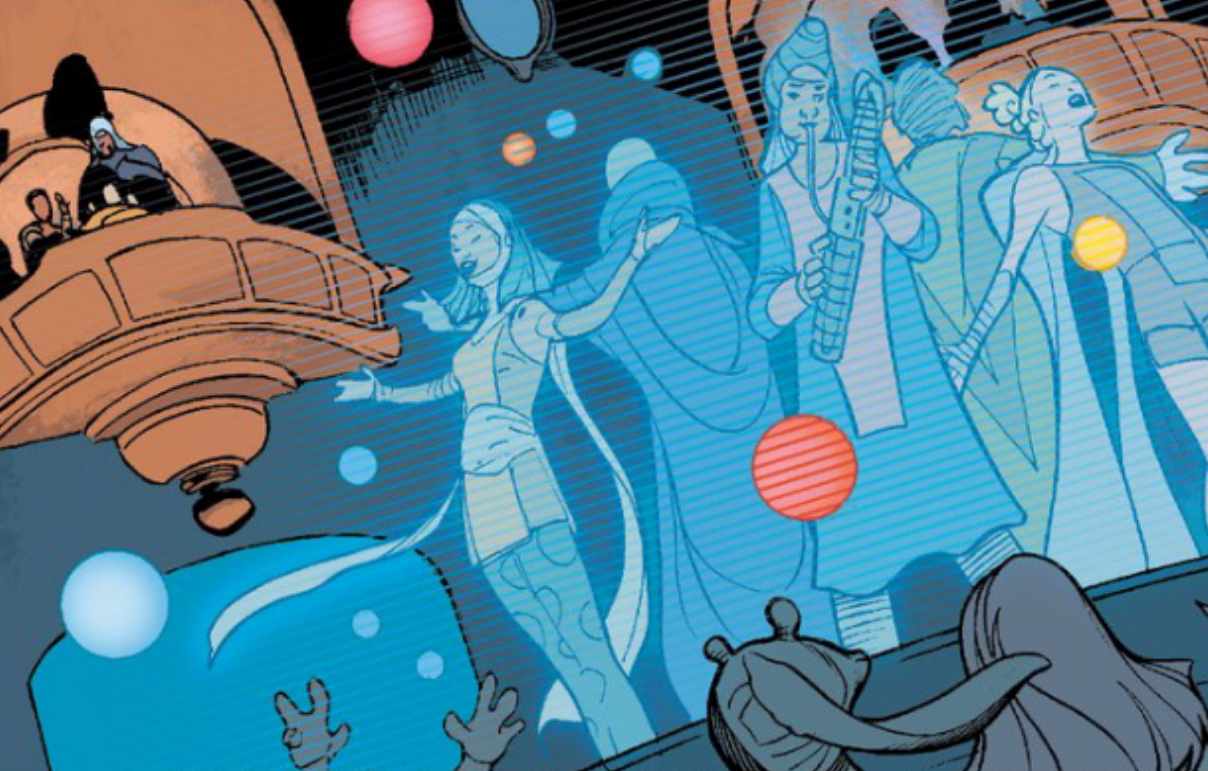 In the 2015 comic book Princess Leia, She saves ‘Melodic Order’, a group of Alderaanian musicians based on Naboo.

So dedicated to their craft, they’d taken a cloister vow to only interact with other Alderaanians so as not to taint their pure music, going as far to only ever perform via holoprojector, and who said people from Alderaan couldn’t be more pretentious!

‘Your creativity is keeping Alderaan alive. For that, I thank you and vow to take care of you.’

Hera Syndulla once said “anyone who can climb out of a B-wing and not fall over dizzy is a hero in my book.” Not as fast as an A-wing or as versatile as an X-wing, the B-wing was all about fire-power. Like standing on the far end of a springboard balanced across the shoulders of a charging bantha; you’d have to be mad to pilot a B-wing. 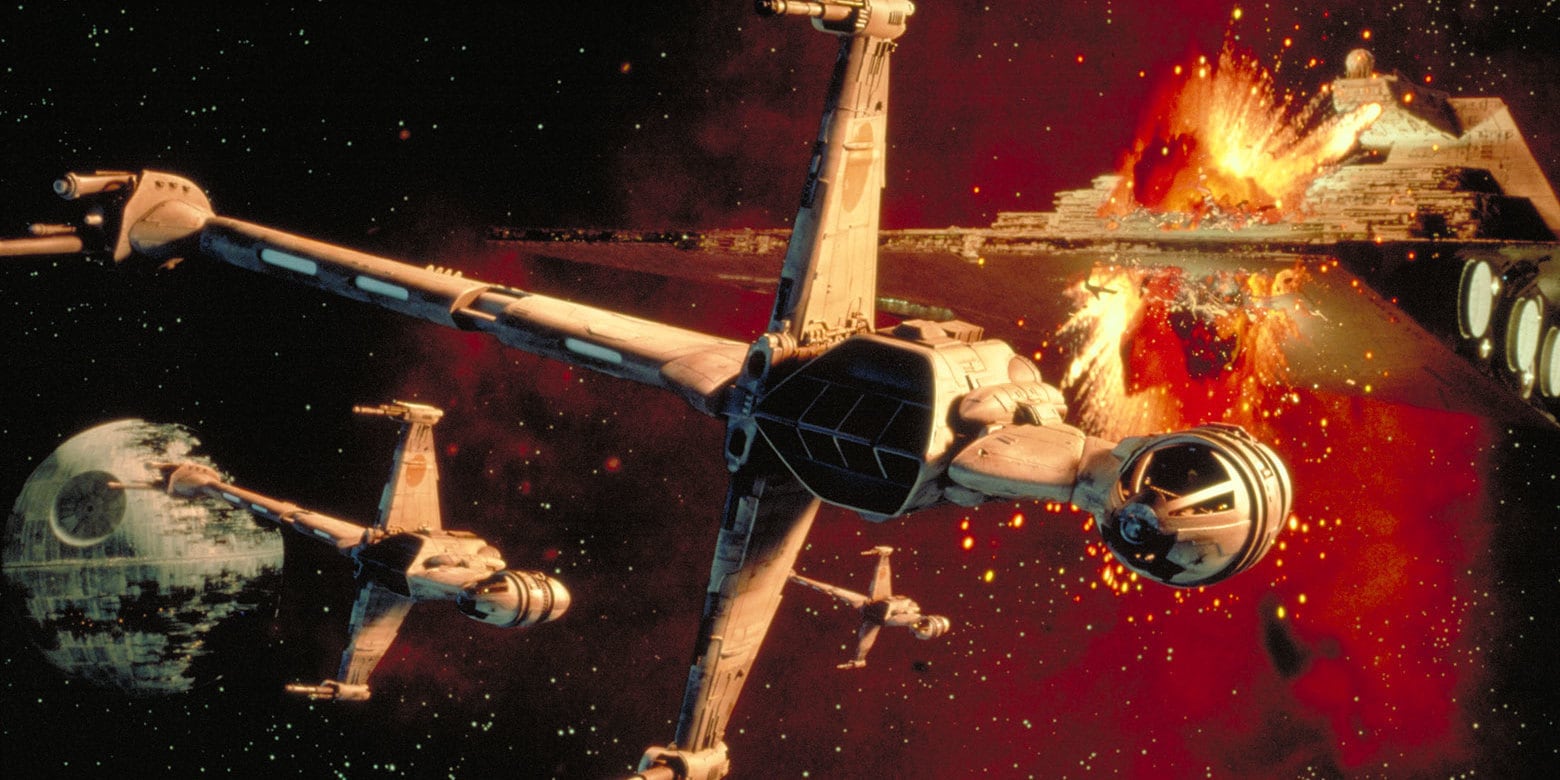 None were madder though than Chass na Chadic from Alexander Freed’s Alphabet Squadron novel. Chadic idolized Jyn Erso and the ultimate sacrifice she made to steal the Death Star plans, and was, after the death of her original squadron, obsessed with the idea of a meaningful death, even holding grudges against allies who’d saved her in the heat of battle. 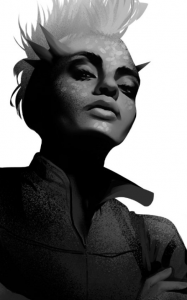 Regardless of her faults, Chadic was a formidable pilot who loved, above all else, music while she flew in battle.

“Synthtone and bass vye screeched chords over the rage of a gurgling Herglic singer. She felt the music in her bones and her horns, the pounding redoubling the ship’s vibrations as she increased thrust. It was a song of agony and revolution, a track she’d played while reducing armored Imperial walkers to burning hulks.”

Throughout the book we see Chass on various missions and every time she’s listening to music, making sure the rhythm and themes of the music match both her mood and the missions. She used it to concentrate, to motivate and even to time her shots.

“it was the music that Chass felt in her body: the swift synthesized beats and the knife-smooth notes from the singer’s throat, telling Chass’s heart when to pump and her hand when to squeeze the trigger. She rode the rhythm as she rode the scarlet winds of Pandem Nai”

So music is just as important to the galaxy far, far away as it is to this one. In canon so far we’ve seen it used for enjoyment and entertainment, in political protest against the oppression of the Empire, to define and preserve culture, and for concentration in the heat of battle.

Behind the scenes, it serves as a fun way for creators to have some fun and do something more experimental.

Let’s finish this with something fun. If you’ve ever been to a Disney Theme park and ridden Star Tours, then you may recognize this droid as your pilot: 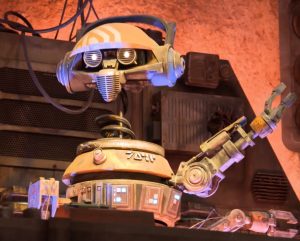 R-3X no longer works for Star Tours and is Currently the DJ at Oga’s Cantina, on Batuu (the setting of Disneyland & Disney World’s Galaxy’s edge). if you care to visit he has a whole playlist of songs, otherwise I’ll just leave you with DJ R-3X’s remix of the OG cantina song he’s entitled ‘Mad About Mad About Me’:

So whatever’s happening in the world, remember: whether you’re listening to slurred passages of Gamorrean, Wookie folk songs, or a blue elephant on the keyboard, music is always there to help.

Stay safe and may the Force be with you, always.