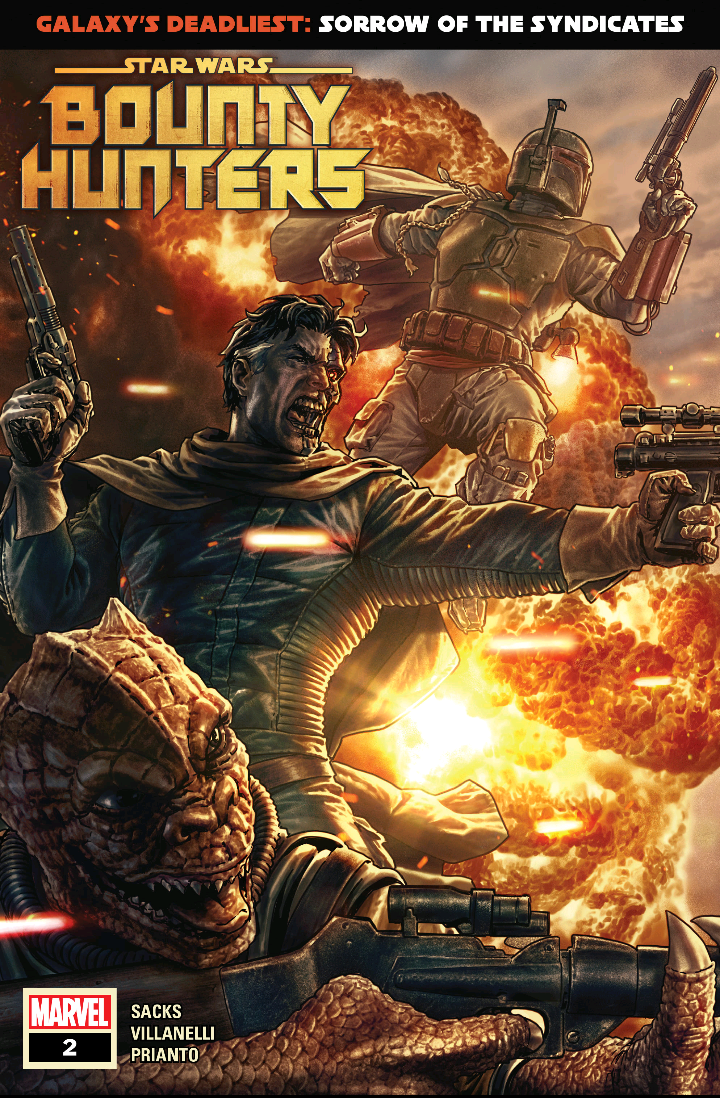 After what was a little bit of a disappointing first issue for me, writer Ethan Sacks and artist Paolo Villanelli are back with the second issue of Star Wars: Bounty Hunter this week. In issue #2 of the ongoing series, the former Imperial turned cyborg bounty hunter Beilert Valance is on the trail of his old mentor Lash, who betrayed him and his crew on their last mission together when she turned on their client. The infamous bounty hunters Bossk and Boba Fett are also on a quest for revenge against Lash, as well as series newcomer T’onga, whose brother was killed during the botched job. 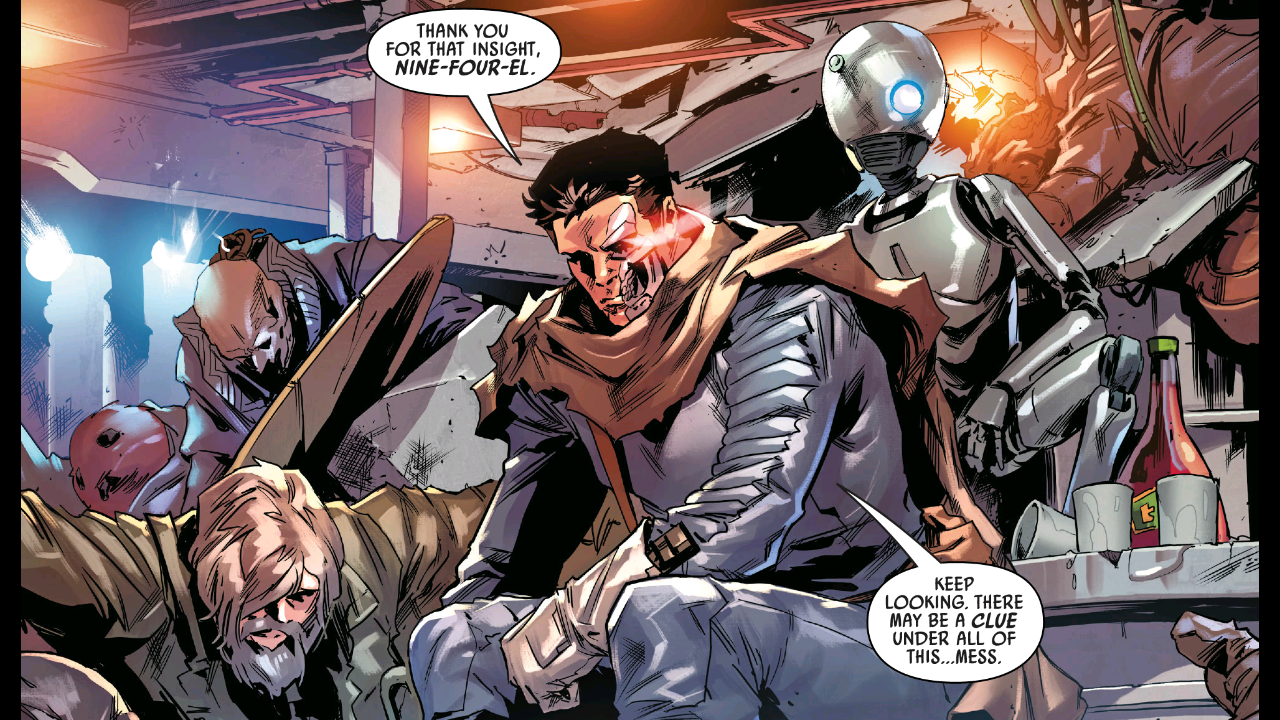 On Eriadu (which you may remember as the homeworld of Grand Moff Tarkin), Valance and the droid 9-4L investigate a cantina at outside Phelar Port. Unfortunately, the pile of bodies stacked up in the establishment means the trail has gone cold. Valance’s contact, Jhorstek, is among the dead, and with the security camera destroyed there’s no way to find out what happened. 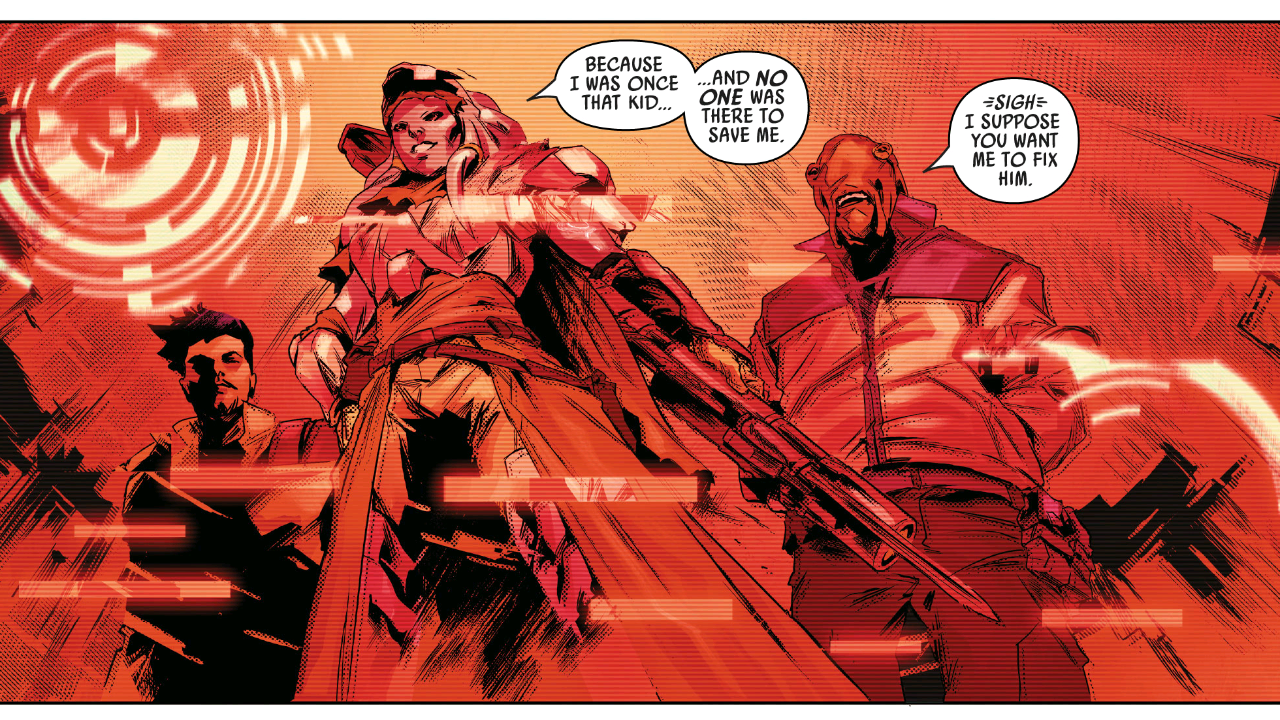 Despite his surroundings, Valance pours himself a drink at the bar and thinks back on his first encounter with Lash and her crew, which included T’onga, her brother T’ongor, and the now dead Abednedo Jhorstek. When stormtroopers had come looking for a young boy who had stolen some rations, Valance stood up for the kid and almost got himself killed in the process. Lash was impressed with his tenacity and she chose to step in and save his life. 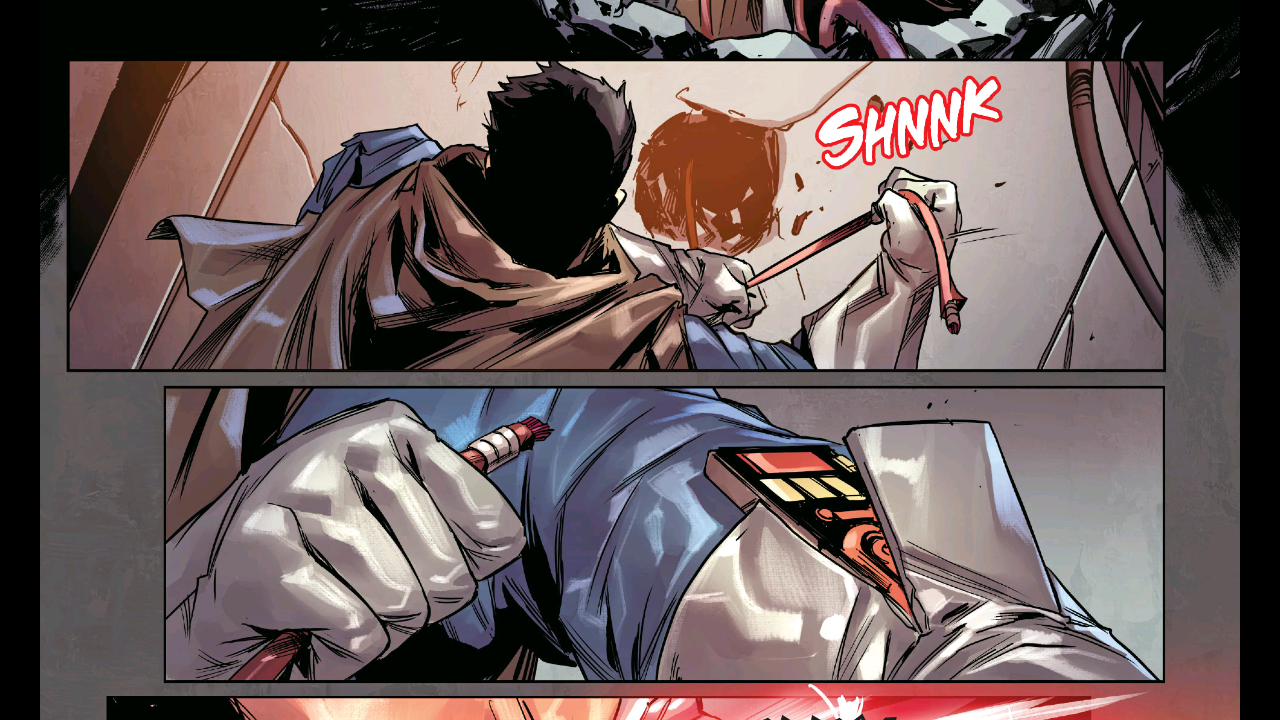 Back in the present, Valance realizes there is more to a security system than a camera. Yanking the wiring out of the wall, he plugs into the system via his cybernetic arm and finds the recording that someone had attempted to destroy by shooting the camera. Much to his dismay, Valance instantly recognizes the iconic bounty hunter responsible for the carnage surrounding him – the notorious Boba Fett. 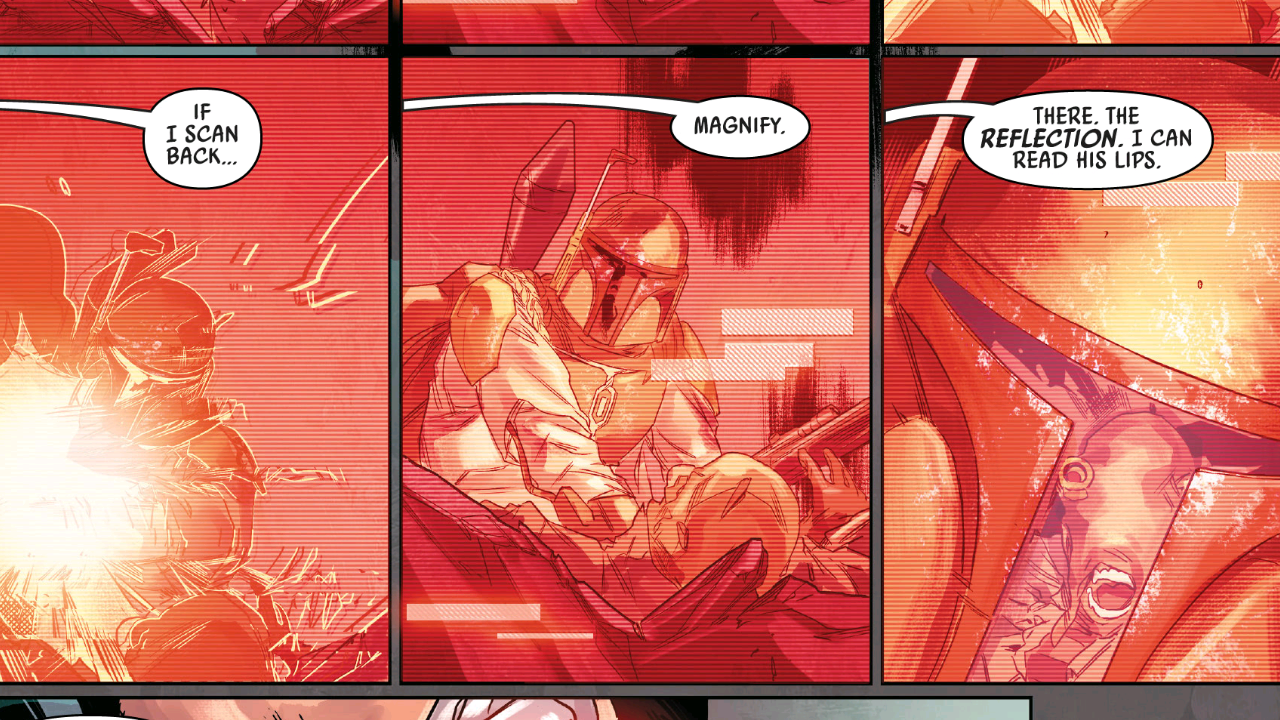 The audio is missing, however, but Valance is able to see Jhorstek’s face reflected off of Fett’s visor and is able to make out the word “Galmerah” by reading the Abednedo’s lips. Valance heads back to his ship and heads off to the graveyard planet of Galmerah (apparently that’s a thing now), but unknown to him, another bounty hunter is on his tail. 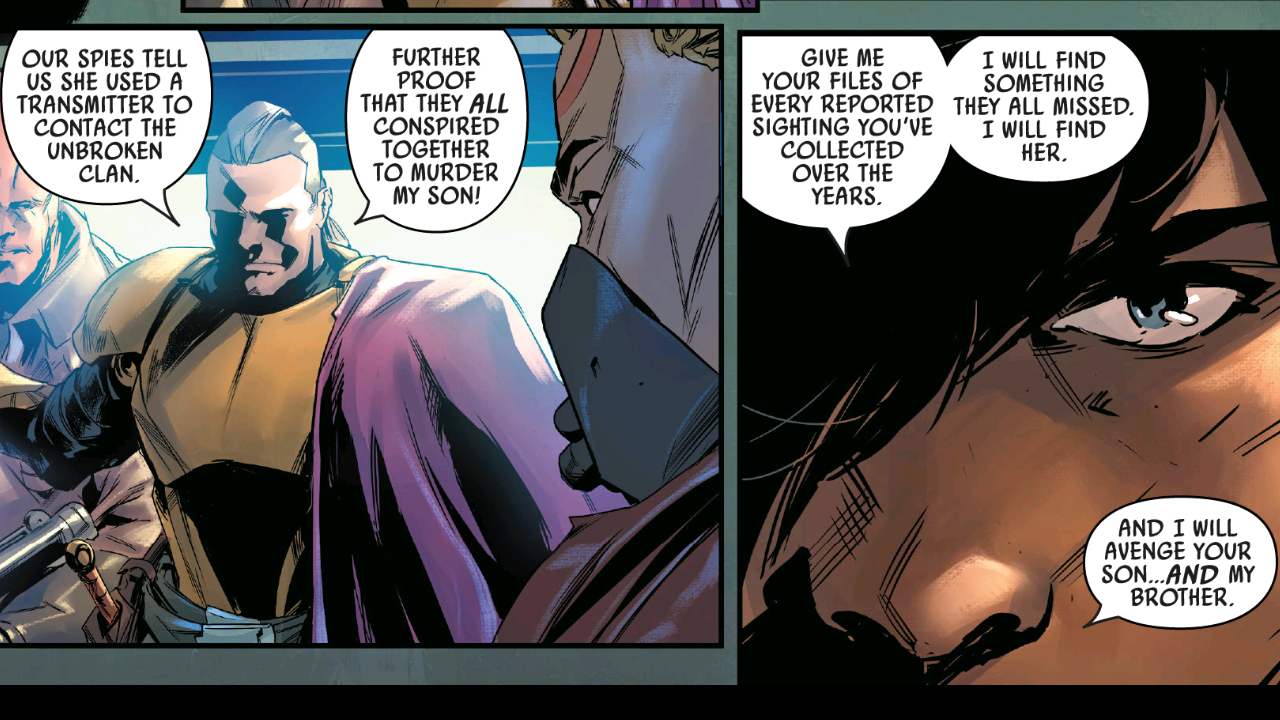 Deep in Hutt space, T’onga infilitrates the fortress of The Mourner’s Wail syndicate, killing any thug who gets in her way. Eventually, she comes face to face with the organization’s leader – Khamdek – who, impressed with her having gotten so far into his fortress unscathed, allows the girl to speak. T’onga offers her services to him, vowing to find Nakano Lash and kill her for the both of them. It was Khamdek’s son whom Lash had killed years before. 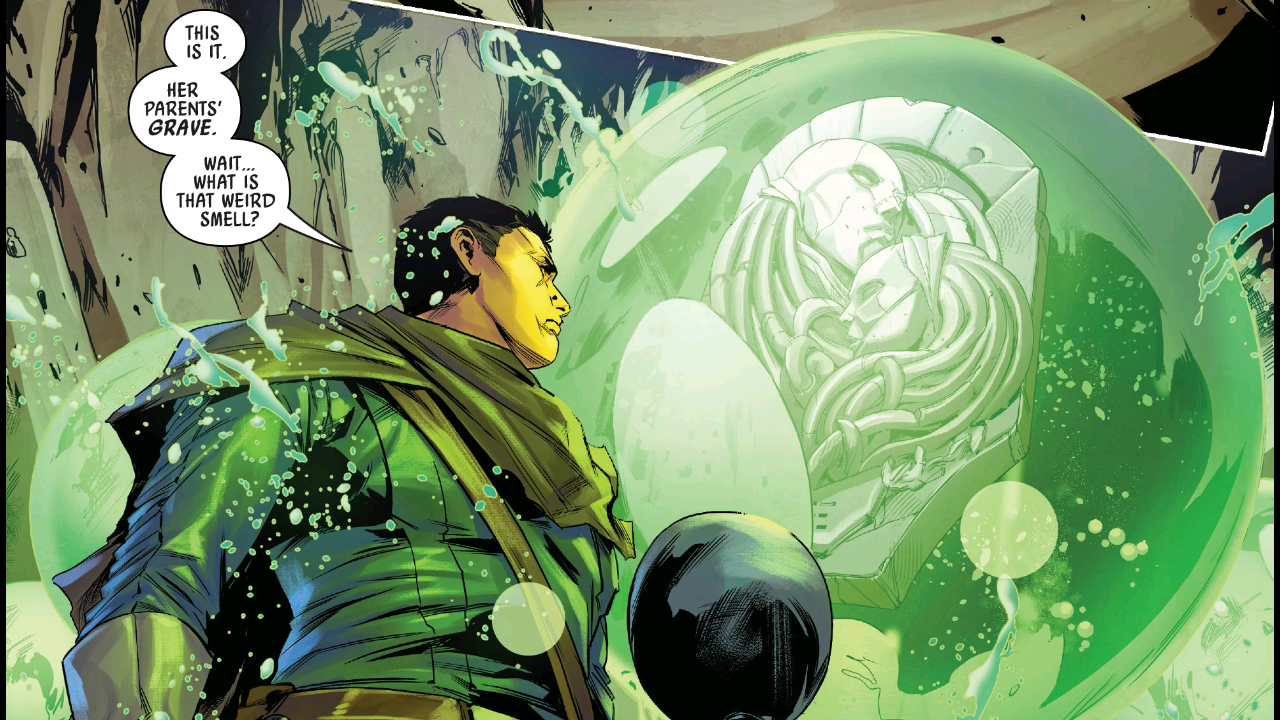 On Galmerah, Valance finds the grave of Lash’s parents. Lash’s family were Nautolan, and apparently, the species was able to communicate beyond words by composing unique mixtures of pheromones. Noticing the smell at the grave, Valance asks the droid to translate the message. The message simply reads “Beloved Parents, Taken Too Soon”, but when Valance touches the bubble of water surrounding the grave, the message changes to a set of map coordinates. 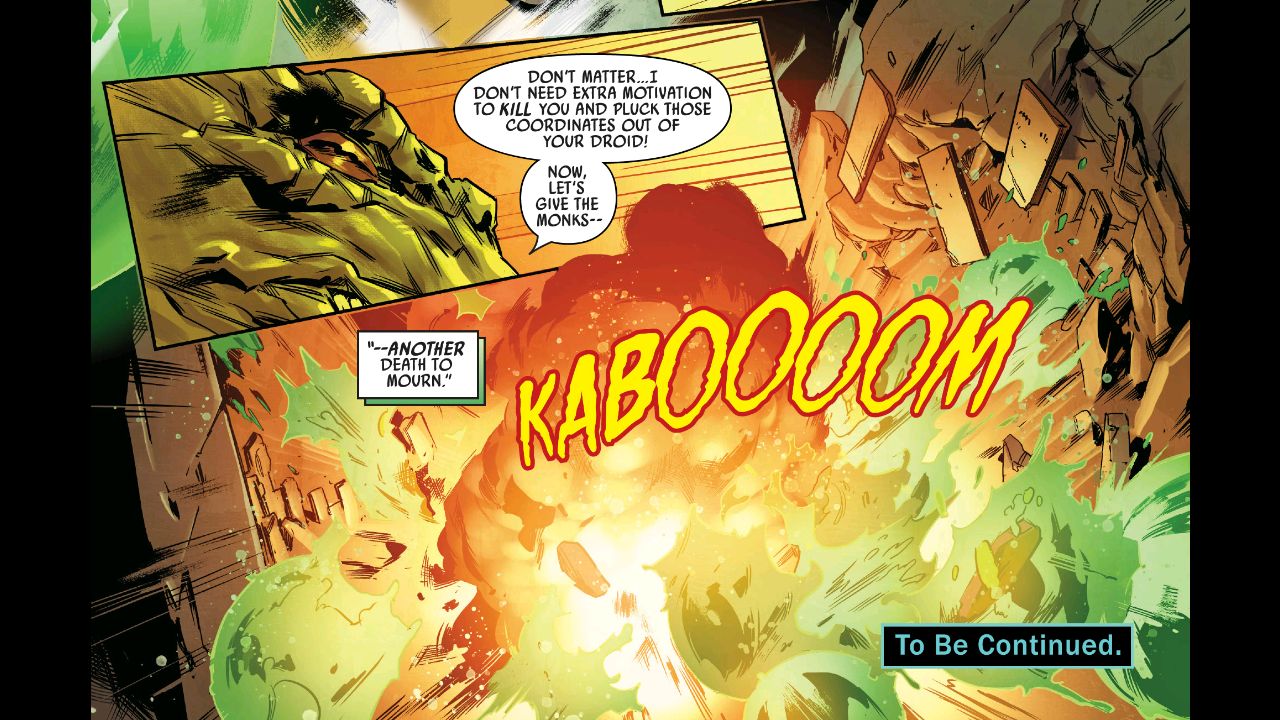 Unfortunately for the cyborg, it is at this precise moment that Bossk, having been given intel from Doctor Aphra, arrives on the scene to complicate matters. The Trandoshan calls Valance “Lash’s little pet” and accuses him of conspiring with her in her betrayal. Valance tells Bossk he can believe what he wants but that he was betrayed just as much as the rest of them. But Bossk is hearing none of it. After threatening to kill Valance and rip the coordinates from his droid, an explosion marks the end of the issue.

For me, this issue was much better than the first, although I admit I’m still not completely sold on this series. There’s a lot of potential here, but so far it’s been a very slow burn with a lot of buildup. That’s not necessarily a bad thing though. A lot of my favorite comic series started off slow, eventually paying off the buildup in some really big ways. I think I just lack confidence in Sacks with his other Star Wars series not really going anywhere after said buildup. But I remain cautiously optimistic, especially with this series not being tied down to any other Star Wars media.

By the end of this issue, it seems that the story is really starting to heat up as the characters’ paths are finally beginning to cross. The mystery of Lash’s decision to kill Khamdek’s son, which I cared nothing about in the first issue, actually has me moderately interested. Was she secretly working for the Mourner’s Wail syndicate’s rival, the Unbroken Clan? Or did she have some other reason for her actions?

I really like Valance as a character, but the promise of seeing him share the same space as Boba Fett is what really got me excited about the series in the first place, so I’m chomping at the bit to see more interaction between them in the future. My expectations for this series going in (however misplaced they may have been) was for something more along the lines of DC’s Suicide Squad, where a bunch of criminals and ne’er do wells work together for a common goal, blowing a lot of stuff up and shooting/stabbing each other in the back periodically along the way. I’m all for the more cerebral tales, but when it comes to my Star Wars bounty hunters, I’m a simple man – wanton violence and over-the-top action is just what the doctor ordered.

Hopefully, future issues will either deliver on these expectations or at least hook me in some other way that causes me to check my expectations at the door and just enjoy the ride. For now, the series is at a crossroads for me. It could be good or even great. Or it could just be another disappointment. The art is good for sure, but I’m concerned about the fact that I don’t care much about the characters in this series. I like Valance, but I was also content to say goodbye to him after the Target Vader mini-series. Time will tell, but for now, I’d say this series is certainly not one to sleep on just yet, but it’s not at the top my Star Wars pull list either. 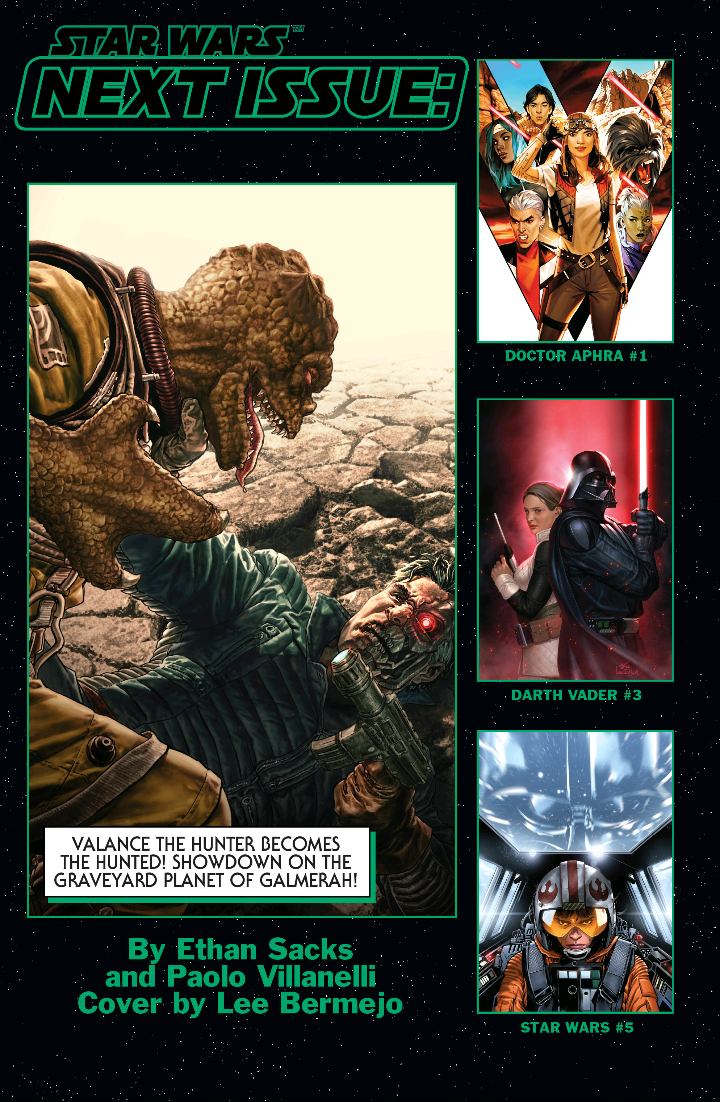