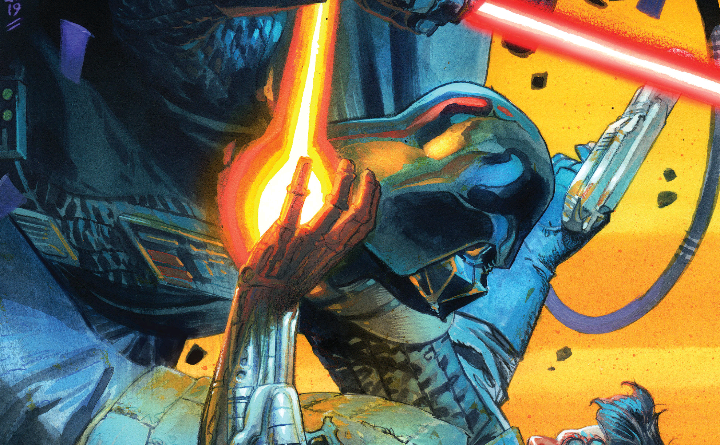 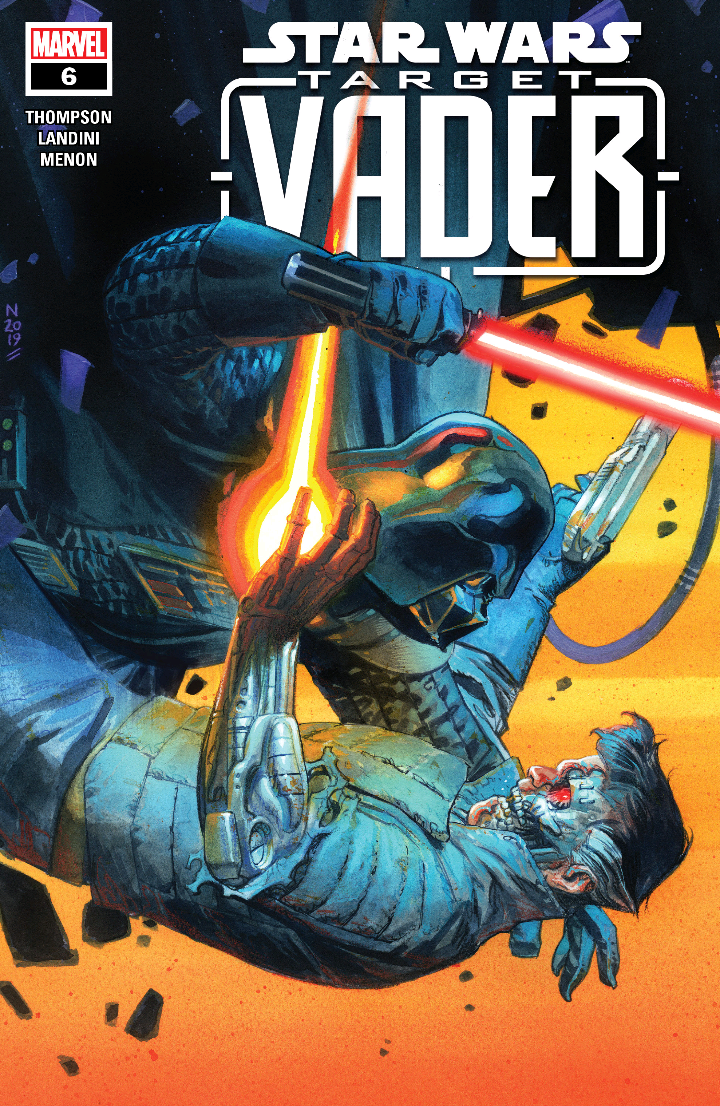 The sixth and final issue of the Target Vader mini-series hit the shelves this week. Will bounty hunter and former imperial trooper, Beilert Valance, survive the wrath of Darth Vader? Well, if you’re like me and you saw the news about the upcoming ongoing comic series Star Wars: Bounty Hunters yesterday before reading this issue, then a great deal of the finale’s suspense was thrown out the window. Yes, Valance lives. We know this because his next adventure will find him tracking down bounties alongside the likes of the legendary Boba Fett and the notorious Trandoshan, Bossk. But I guess if you’ve been following this series, you’ll at least want to check this one out to see how it all goes down. 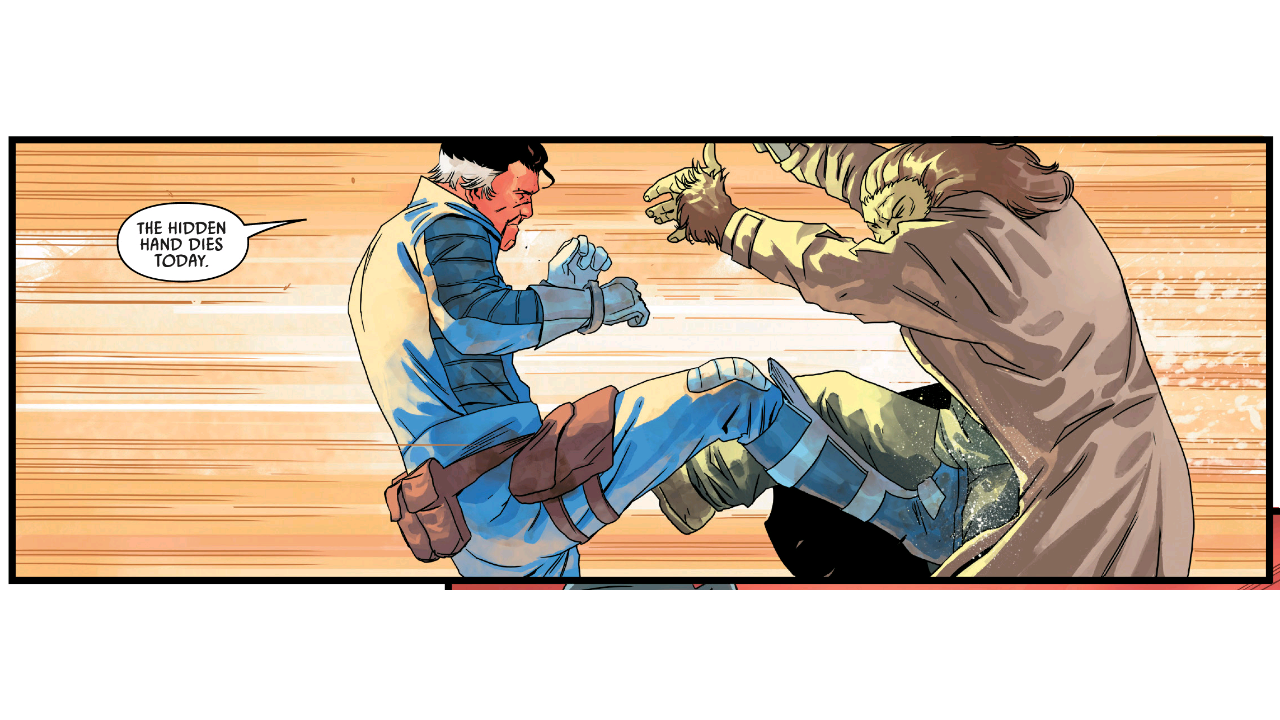 I’ve said from the start that this series was a simple yet enjoyable ride through the Star Wars universe, and that ride continues here. It’s not very impactful to the saga, and it’s not even really very epic, but it was enjoyable for what it is. However, I kind of expected the series to go out with a little bigger bang than this issue delivered. It’s one of those series that if you asked me about it a year from now I would respond with “Yeah, that series was pretty good.” But then you ask me what it was about and I’d have to say, “I really can’t remember. It has a cool cyborg bounty hunter in it though.” So, yeah. Valance is cool. But the story is largely forgettable. 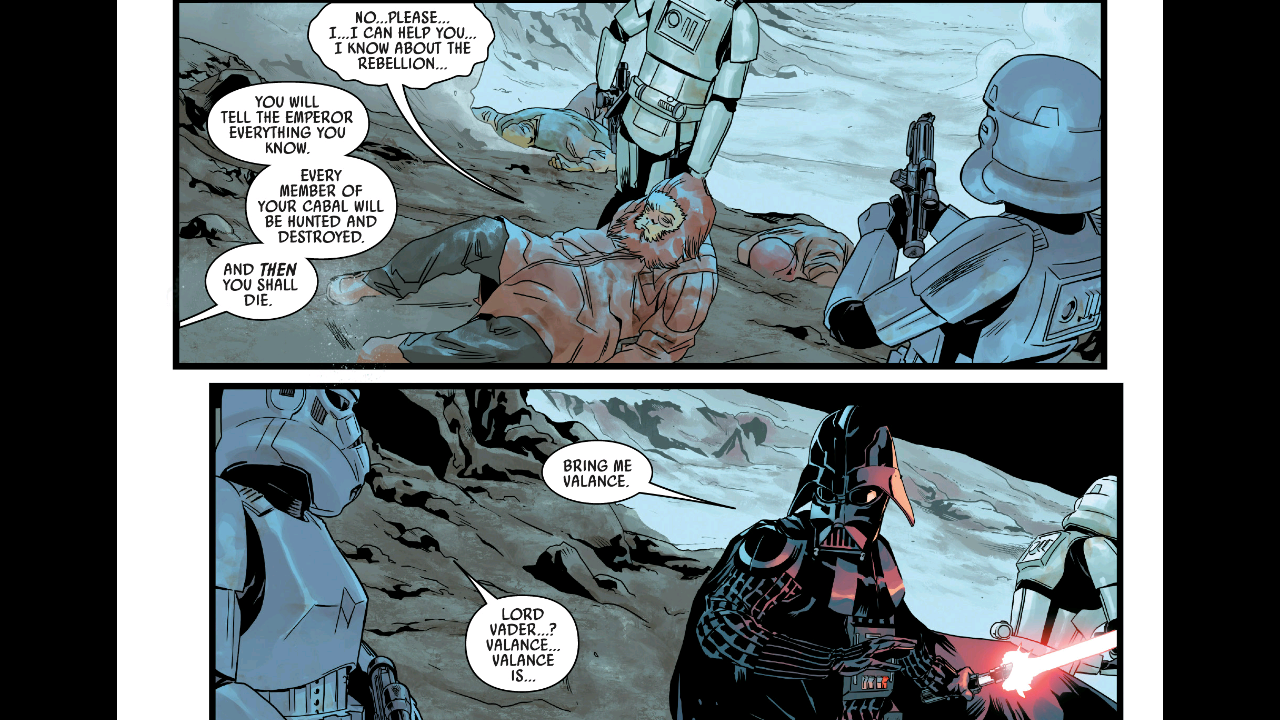 If you’ve read the other issues (or at least our recaps of them), then you’ll know that Vader is blackmailing Valance to lead him to the “Hidden Hand” organization that hired Valance to kill him. The Sith lord threatens to kill the people on his homeworld if he refuses, but Valance had another play in mind. Teaming up with the Rebellion, Valance works out a deal for them to help him track down the Hidden Hand in exchange for much needed weapons for the Rebel Alliance. 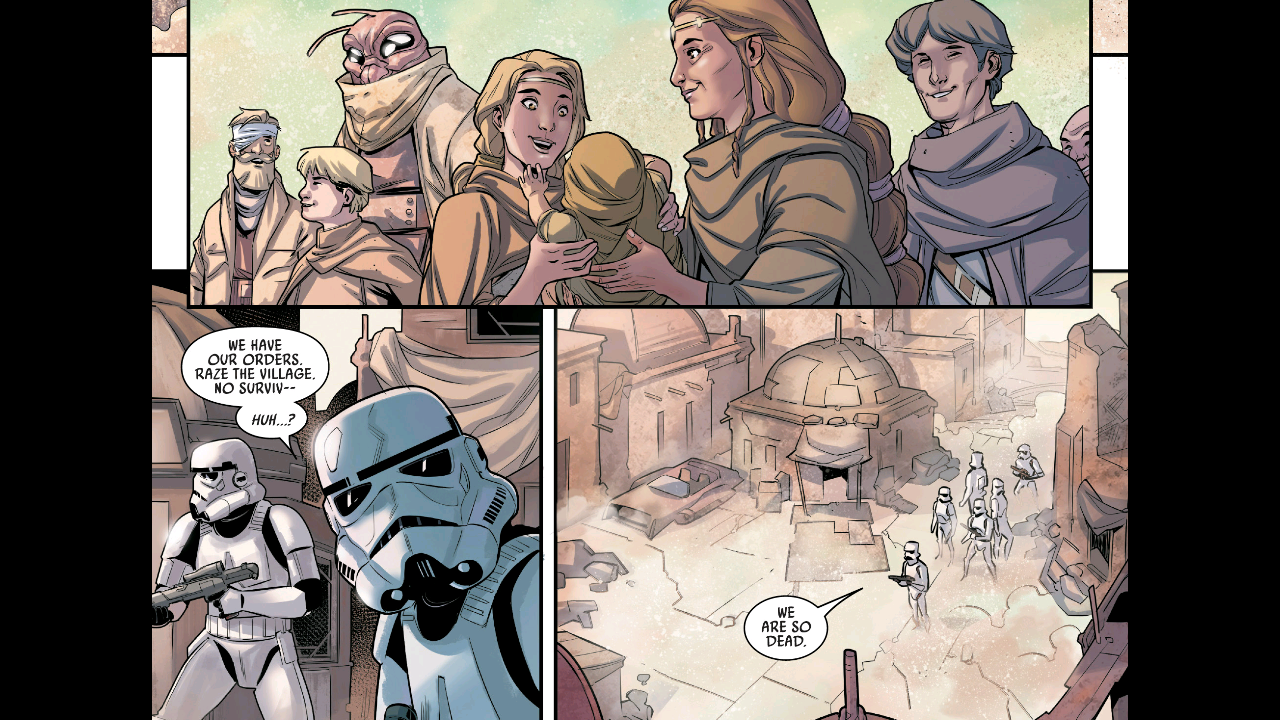 In the end, Valance leads Vader to the Hidden Hand’s secret base, where the dark lord wipes out every trace of the clandestine organization. Valance then escapes Vader’s grasp and goes on to make good on his promise to supply the rebels with weapons. Angered by Valance’s desertion, Vader orders the massacre of his people, only to discover that they had been evacuated from their homes, all thanks to the rebels. Having saved his people, aided the rebels, and escaped with his life, Valance also tracks down Dengar and gives him a little comeuppance. 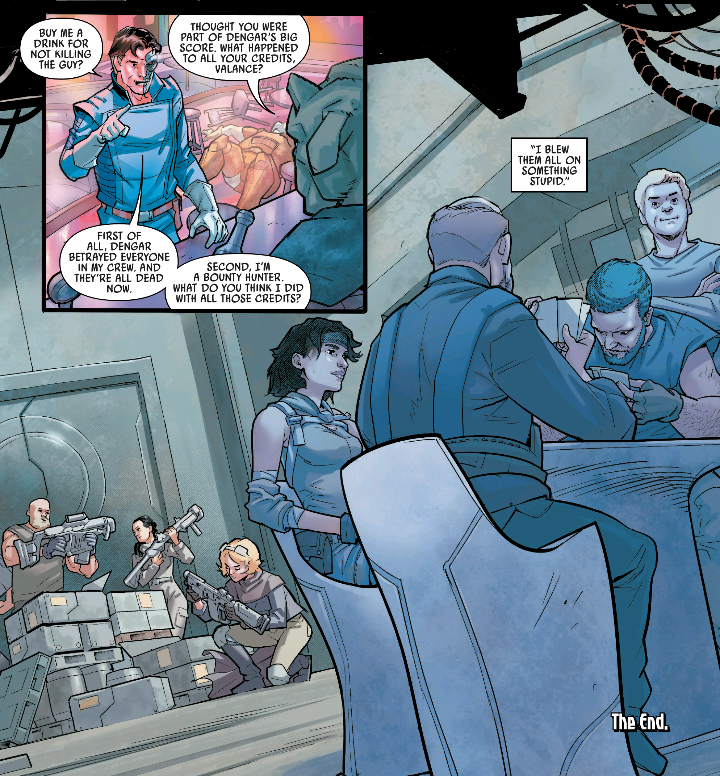 Like I said, this series is good. It’s just not great enough or intriguing enough to be very memorable, and this issue especially, while providing a moderately satisfying conclusion to the story, didn’t really do enough to elevate the mini-series high enough above mediocrity to suggest this as any sort of “must-read” Star Wars tale. But not every comic has to be the “best comic ever” to have its place in the saga or to be entertaining. It’s definitely not a bad entry, but unless you’re a die-hard canon junkie or just really into bounty hunters, this one can definitely be skipped without missing out on much of anything. However, I do like Valance as a character, and I look forward to seeing him in action next March when the first issue of Bounty Hunters is released.

Star Wars: Target Vader #6 is available now in a comic shop near you or online at Comixology. Happy reading Star Wars comic fans! 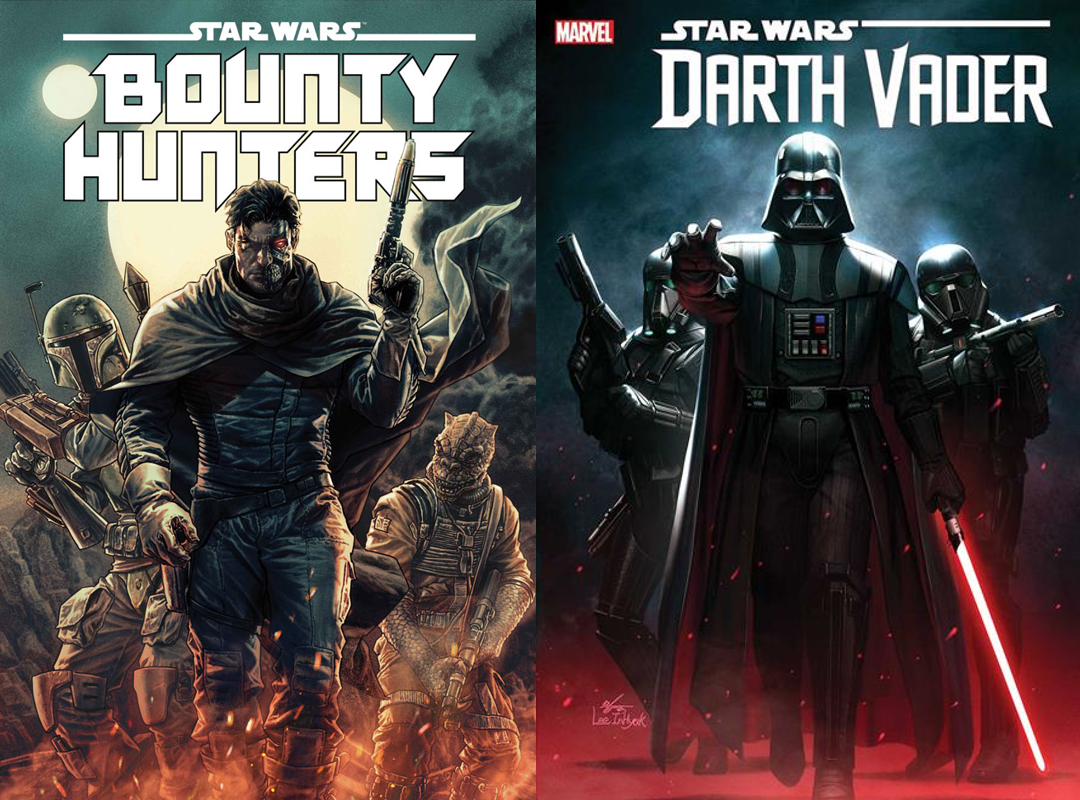 StarWars.com has more details on the new series:

The series follows cyborg bounty hunter Beilert Valance as he seeks revenge on mentor-turned-betrayer Nakano Lash, who has recently resurfaced under mysterious circumstances. But Valance isn’t the only mercenary looking for Lash, and he soon finds himself on a collision course with Boba Fett, Bossk, and a slew of new killers. 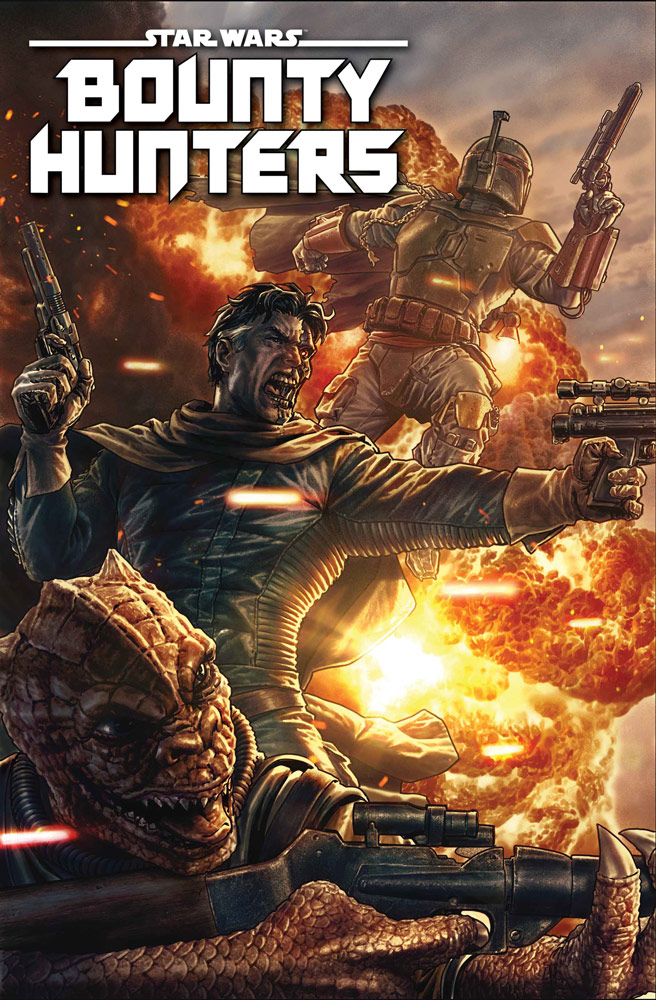 For more information on the new series, including an interview with writer Ethan Sacks go to StarWars.com. 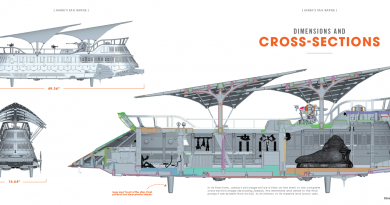 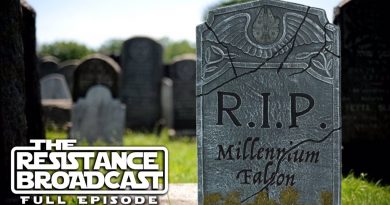 The Resistance Broadcast – Would Star Wars Ever Destroy the Millennium Falcon? 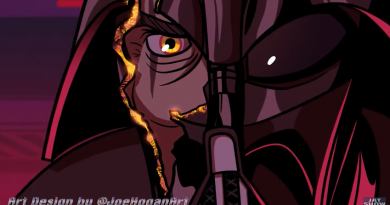