Review: Star Wars: The Ultimate Pop-Up Galaxy is an Artistic Wonder and a Giant Feat of Tiny Engineering 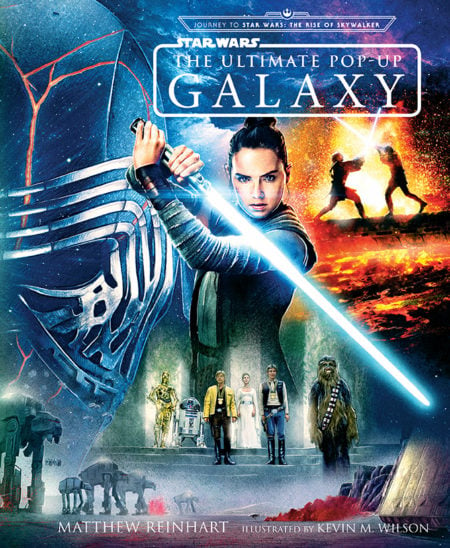 Everyone loves a good pop-up book, am I right? I mean, there’s just something about them that turns ordinary reading into an adventure. It’s the thrill of discovering what secret surprises wait for you under those cleverly placed flaps. The way the characters and landscape leap up out of the story and seemingly into your world at the turn of every page. There’s nothing quite like it as a young reader, being given the ability to interact with the story before you in a way that’s just so much more fun than an ordinary book. Man those were the days…curling up on the couch with a juice box and a little bowl of Gold Fish crackers as I embarked on an epic dinosaur pop-up adventure. But that’s just it. Pop-up books are fun and all, but they’re just for kids. Right? Wrong…so very…very wrong.

Just when you thought the most enjoyment you’d ever get out of a pop-up book again was sitting in the chair with your own kid as they tear through the little transportation-themed pop-up book like Godzilla through Tokyo, just praying that at least one or two cars or planes survive to the next reading session (…so, so many pop-up books have been destroyed by my kids…so many flaps no longer hiding the secrets beneath…so many lives of the paper people cut short long before their time as they were ripped from their friends and loved ones…), along comes New York Times best-selling paper engineer Matthew Reinhart and his intricately crafted pop-up book Star Wars: The Ultimate Pop-Up Galaxy. 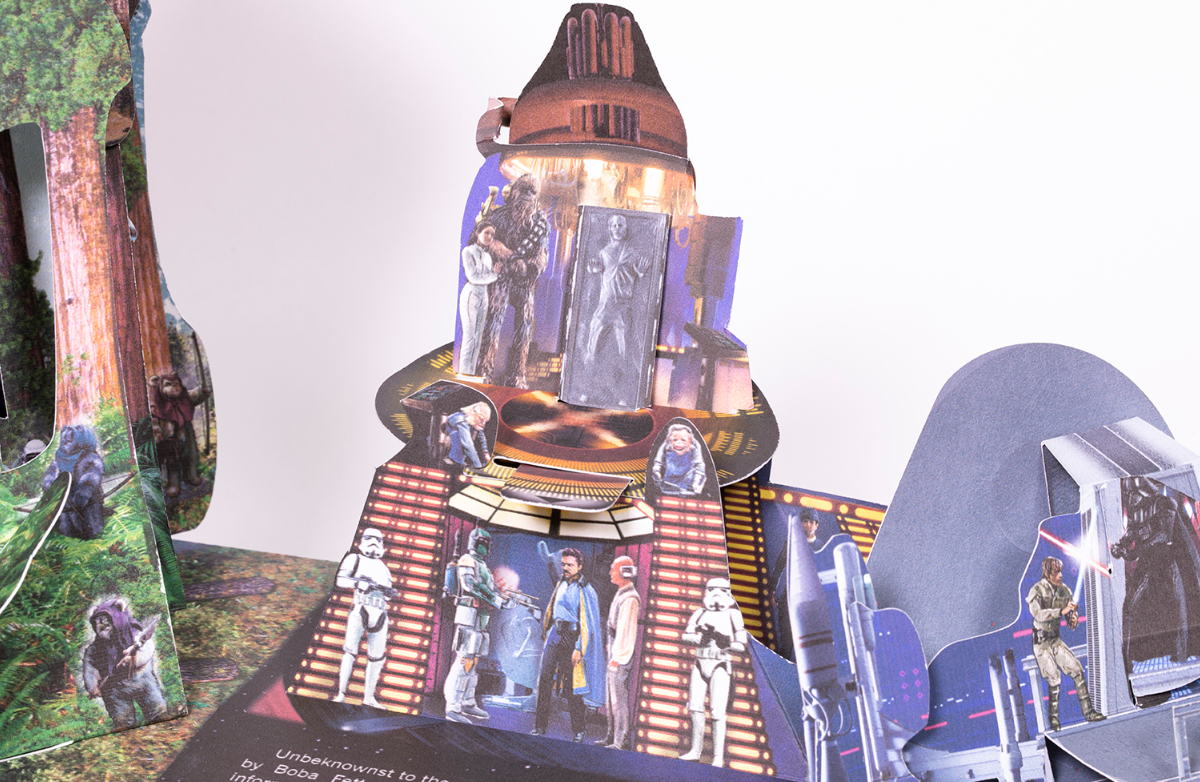 Let me get straight to the point. Star Wars: The Ultimate Pop-Up Galaxy is an incredible achievement. I haven’t had this much fun looking at a Star Wars book (or any book for that matter) in a long time. The art is beautiful, the flap/tab interactions are immensely rewarding, and the way the illustrations work together to jump off the page and tell a story is incredibly satisfying. Pop-Up Galaxy is an artistic wonder, but perhaps even more impressive than that is the fact that it’s truly a giant feat of tiny engineering. How Reinhart came up with these designs is truly mind-boggling from the first spread to the last and his creations are a fitting tribute to the entire Star Wars film saga. 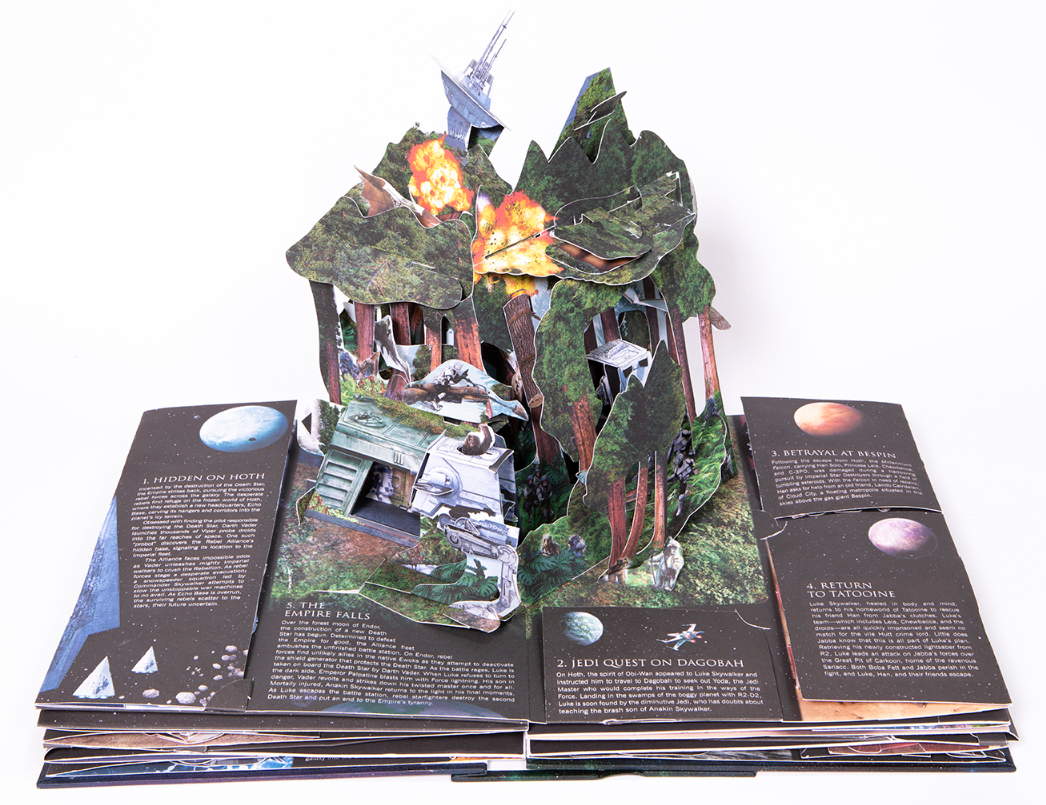 Each spread covers a different era in the Star Wars story and contains a massive centerpiece that rises up to wow you immediately upon turning the page. From there, the amount of detail grows exponentially as you discover even more secrets and smaller set pieces beneath the spread’s secondary flaps. 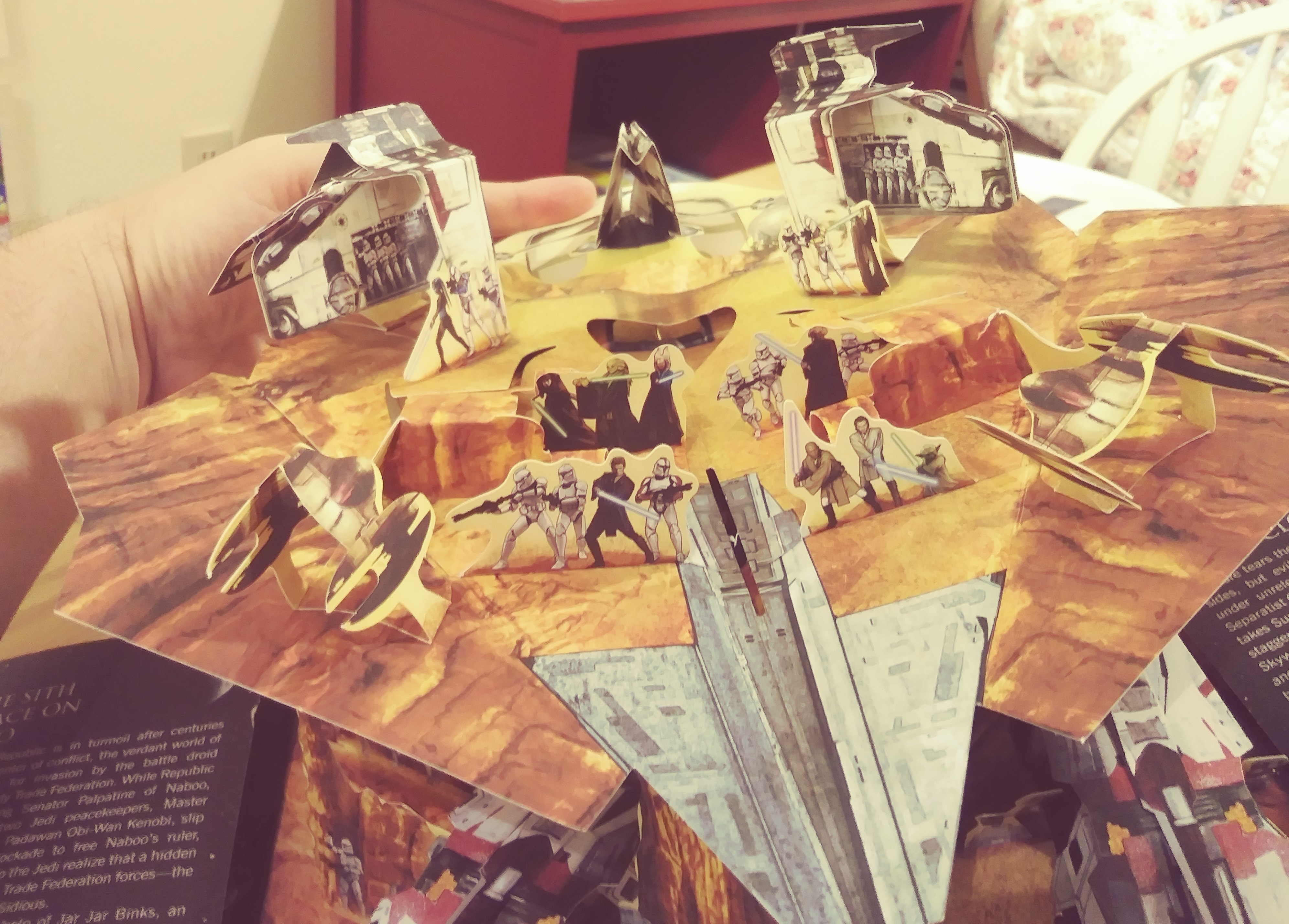 The book begins by transporting readers to the Clone Wars via an epic bird’s eye view of the Battle of Geonosis. The Republic starship opens up to reveal the Jedi as they lead the clone army into battle against the separatists. Further exploration reveals a glimpse at the Battle of Naboo, where a slight pull of a tab can send a Gungan booma hurtling through the air toward the enemy droids. The prequel page continues to delight as you witness the duel between Obi-Wan and Anakin on Mustafar and the creation of the cyborg Darth Vader, a display that is perfectly accented with the ability to place a scorched Anakin in his iconic suit with the pull of a tab. 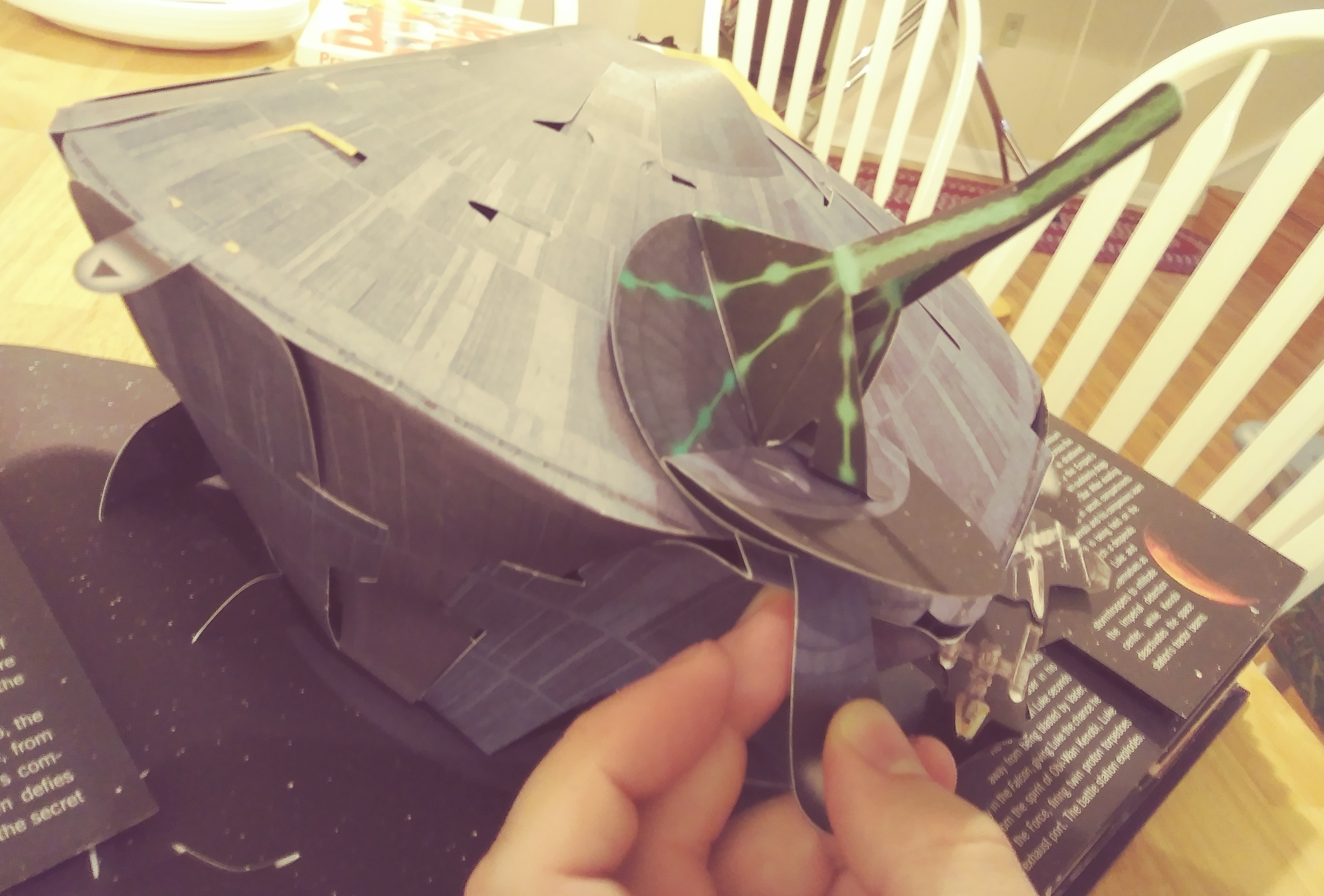 The next spread covers the rise of the Rebellion against the Empire as the Death Star rises up from the middle of the page. Understandably, Reinhart was unable to construct a perfect sphere, but the suggested shape is sufficient, and the ability to fire the battle station’s weapon with the pull of a tab is one of my favorite actions in the book. You’ll also get some other key moments from A New Hope on this spread, and even a nice little display of the Battle of Scarif from Rogue One with an X-Wing crashing into the head of an AT-ACT and a Kessel Run Millennium Falcon from Solo that transforms into the classic Falcon from the original trilogy. 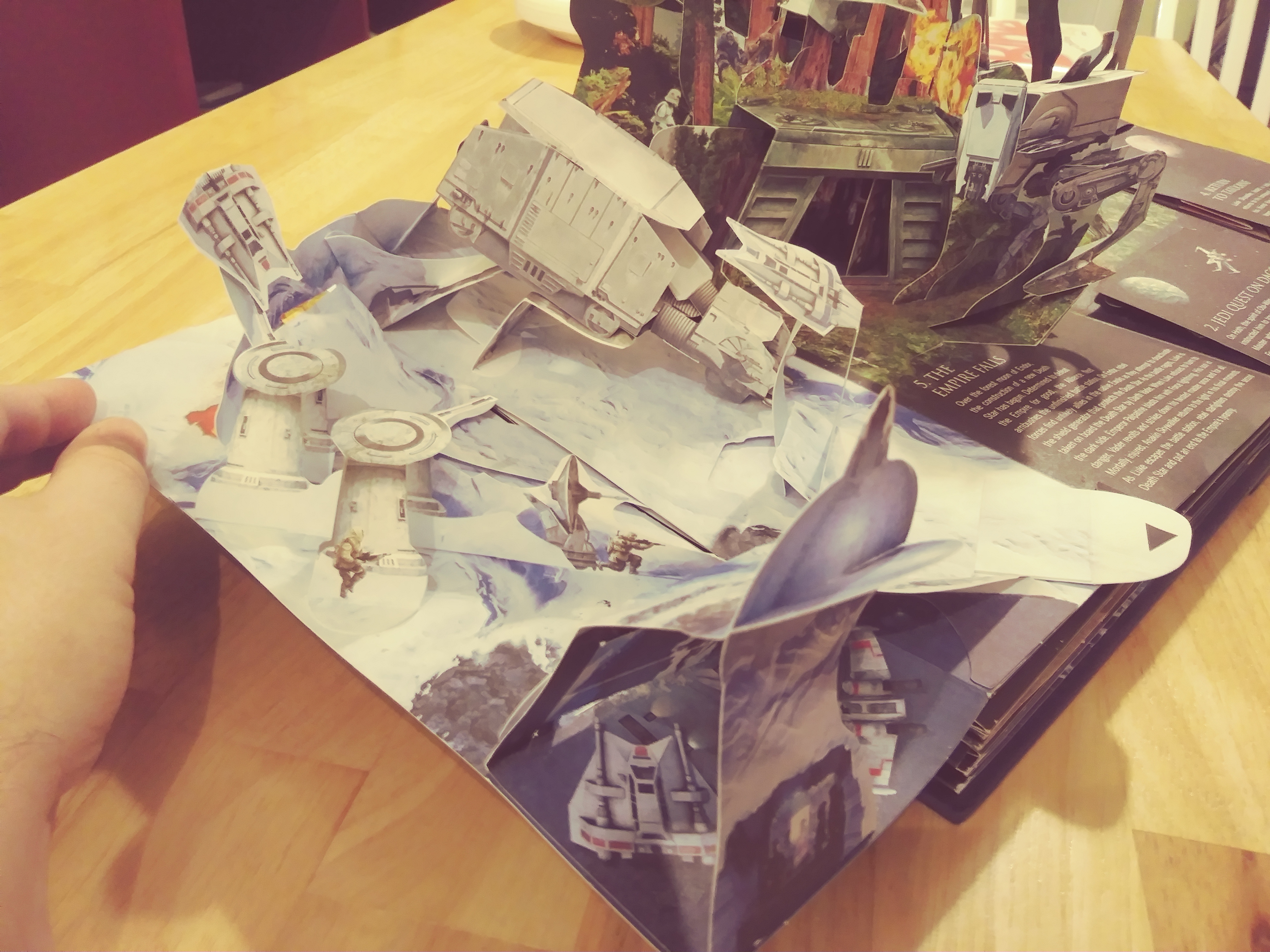 Moving on to the next spread, readers are transported to the Battle of Endor from Return of the Jedi, which is my favorite of the book’s main centerpieces. The actions on this one are also a joy, as the simple pull of a tab sends the AT-ST walking across the forest floor and another causes a speederbike to explode into a nearby tree. But what about The Empire Strikes Back? Don’t be fooled by that epic Return of the Jedi centerpiece being the first to greet you. A secondary flap that is larger than the others opens up into a fantastic display of the Battle of Hoth that is complete with a flying snowspeeder and an AT-AT crashing face-first into the snowy ground. Smaller set pieces include Yoda’s hut on Dagobah, the Bespin lightsaber duel, Jabba’s sail barge, and the carbon freezing chamber that allows you to encase Captain Solo in his carbonite prison. 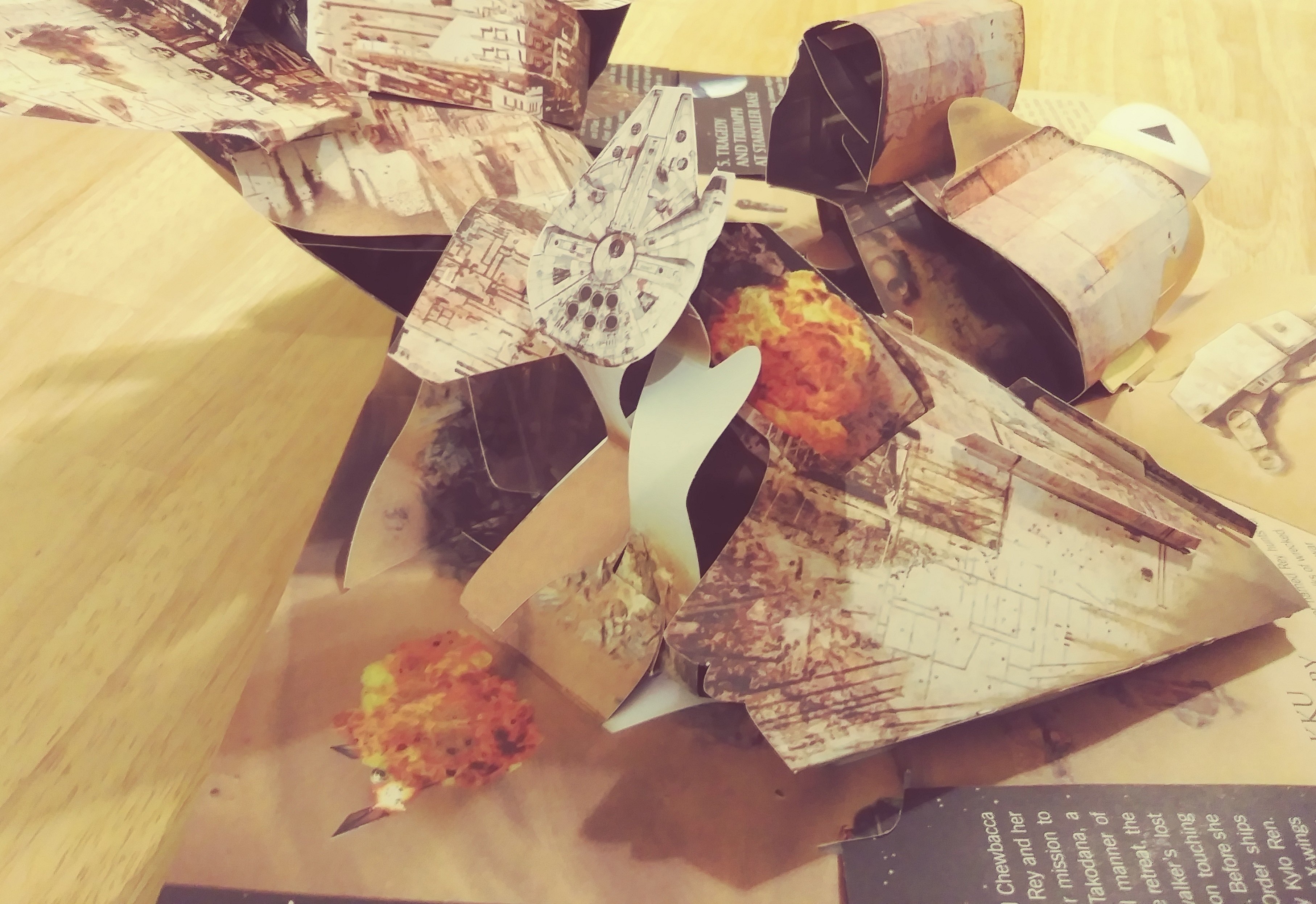 The fourth spread brings us to The Force Awakens and the starship graveyard on Jakku as Rey and Finn are attempting to escape the First Order. The centerpiece’s main interaction has you outrunning TIE Fighters through the skeleton of a Star Destroyer with the fastest hunk of junk in the galaxy, just like in the movie. This page also includes Maz’s castle on Takodana, the Resistance base on D’Qar, and the Rey vs. Kylo Ren duel on Starkiller base. The additional content in this one is not as inspired as some of the others, but the centerpiece is excellent. 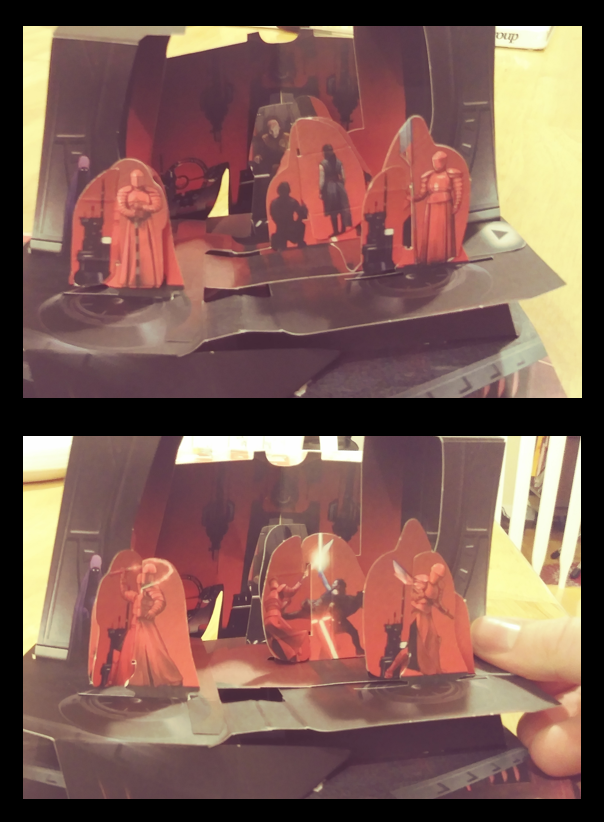 The final spread opens up to the Battle of Crait, where the Gorilla walkers can be seen (and moved) walking across the salty earth. Luke hangs out with the fish nuns on Ahch-To, Kylo Ren fights his uncle’s specter, a space horse crashes through a casino, and Rey and Kylo Ren take on the Praetorian guards. All around, everyone’s having a good time, but no one is having as good of a time as I am, excitedly flipping all the flaps and pulling every tab to find out what other secrets await. 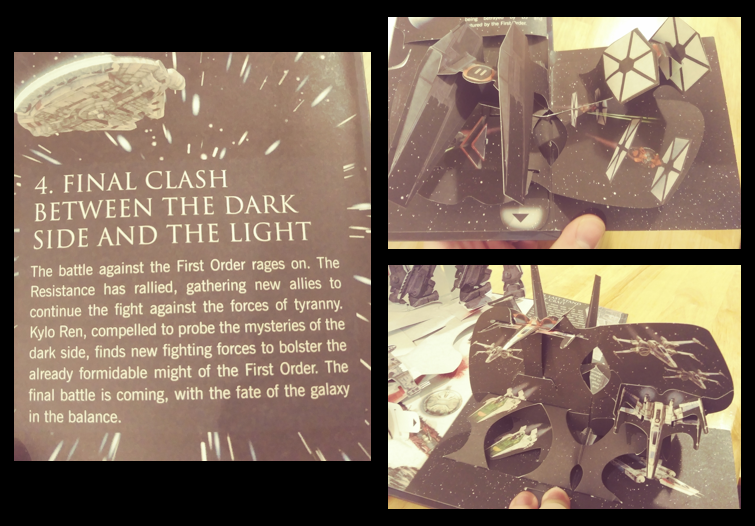 Speaking of secrets, there is one flap in this book dedicated to The Rise of Skywalker, but don’t get too excited. The space battle that is depicted from the film is pretty cookie-cutter in design. It’s cool, but there’s really nothing to be gleaned from this little display about the upcoming film. However, I wasn’t really expecting there to be, and the display fits in nicely with the rest of the spread.

I honestly can’t recommend this book enough. It’s a little pricey, but you get what you pay for. The craftsmanship in this book is astounding, and the fact that they were able to mass produce it on any level is pretty crazy considering how detailed it is. I don’t imagine Reinhart’s work is quick and easy to replicate by any means.

As cool as this book is, it’s not perfect. It’s certainly the best pop-up book I’ve ever seen, but that doesn’t mean it doesn’t have any flaws. Overall, I am very satisfied and impressed with this book, but I’m a little bit disappointed in one of its big features that doesn’t quite work out like I wanted it to. 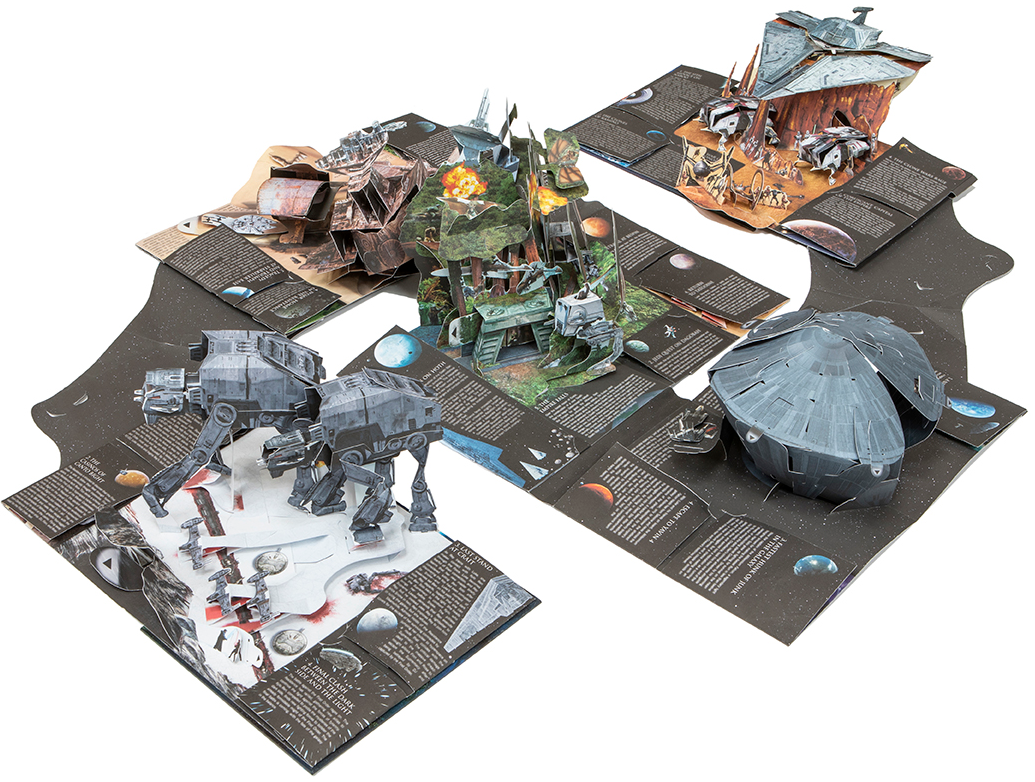 The feature I’m referring to is how the book opens up into a massive diorama showcasing all of the book’s glory at one time right on the table (you’ll need a wide table) or the floor in front of you. It does look pretty cool, and it’s relatively easy to open up and put back together when finished. That being said, it bugged me that I couldn’t open all the flaps as well to add to the massive display. Maybe I’m just being greedy, and I’m not sure that it would even be possible to design it to do so, but this would have been really amazing. The problem is that the secondary flaps have to be physically held open to view them as they have a tendency to close on their own. But really, this is a minor gripe in the scheme of things, and the originality and craftsmanship of this book elevates its value well beyond this shortcoming.

The only other complaint I have is not really the book’s fault. Because of the intricacy of the design, there are a few problem areas that you might find to be a little bit on the flimsy side. Most of the designs are pretty forgiving, but there are a few that you’ll find yourself holding your breath as you move them into place. Within the first few minutes of exploration, I found myself breaking out the scotch tape to make a repair on a small piece that my four-year-old accidentally pulled just a little bit beyond its capacity to move. He was even being pretty careful with it, but he was excited to look at it with me, and really, isn’t that what Star Wars is all about? To me it is. But still, if the danger of your kids messing this thing up (or yourself for that matter) is a risk you’re unwilling to take, you might want to pass on this one (or just hide it really well).

This is a book that all ages can enjoy, but if it’s something you want to keep just like it is for years to come, then you might want to consider making it an adult thing.

Star Wars: The Ultimate Pop-Up Galaxy is available now in a bookstore near you. Happy reading Star Wars fans!