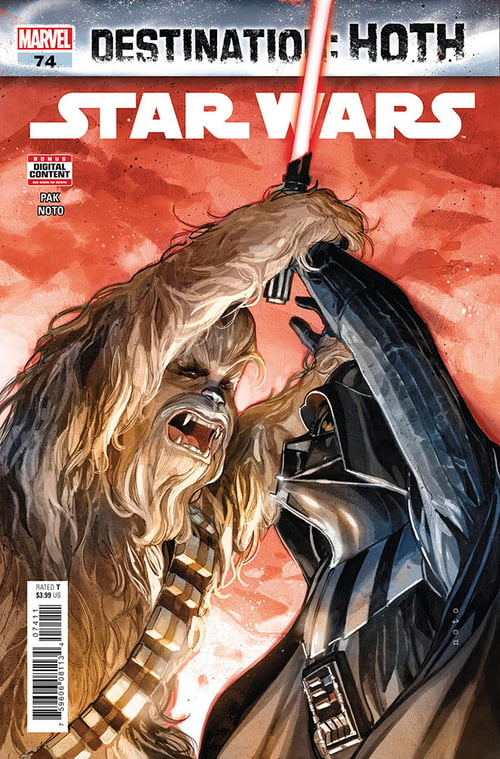 Our three stories converge as the Rebels’ plan to destroy the Empire’s fleet come to a head! But can LUKE really trust the grifter WARBA CALIP?

Can HAN, LEIA, and DAR CHAMPION survive a head-on battle with a STAR DESTROYER?
And what happens when CHEWBACCA takes on LORD VADER himself in hand-to-hand combat?

And the Rebellion’s search for a new home…a base safe from the reach of the Empire…begins.

Before I left on a short hiatus, our heroes were just beginning their mission whose goal was to give the Empire something else to chase instead of the Rebels, after Vader deployed thousands of probes and started closing in on them. By the issue #73, Murphy’s Law has taken the full effect and all of our heroes are in one predicament or another. 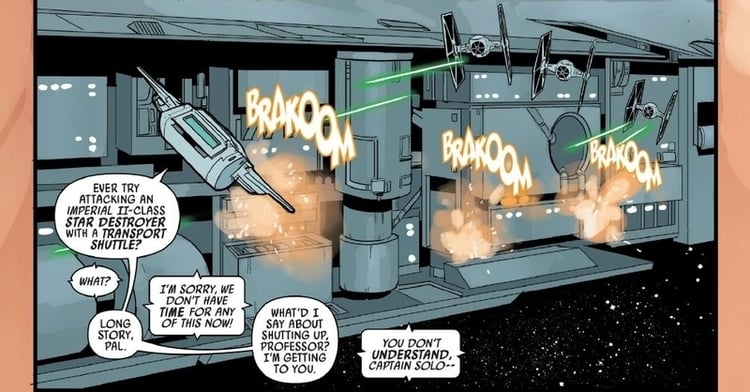 As this issue opens, Luke is saved by Warba from the chasing stormtroopers. Han, Leia and Dar are preparing to attack the Star Destroyer (I know!). Back on K43, C-3PO and Chewbacca are trying to outrun Darth Vader while, at the same time, saving the rock people. 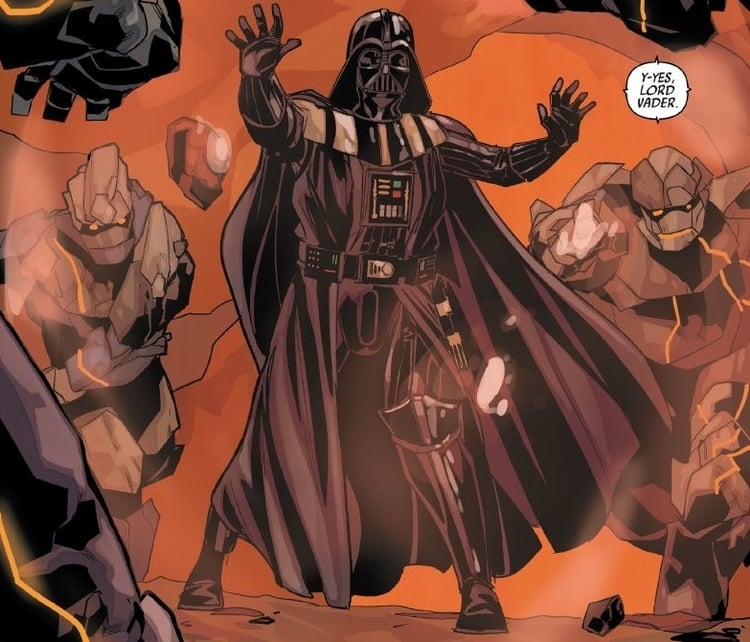 As expected, Han comes up with a stupidly daring plan that also relies on the predictability of the Empire. The intention is for the Imperial forces to converge on K43 where Han basically intends to play it by ear. This also means that all our Rebels will find their way to the planet, once again putting Luke in Vader’s cross-hairs.

While Luke finally manages to help evacuation of the Rebels from Sergia, he says his goodbye to Warba. It isn’t an easy or happy goodbye when two worldviews – one world-weary and the other optimistic and naive – collide. It remains to be seen if Luke was right about Warba. 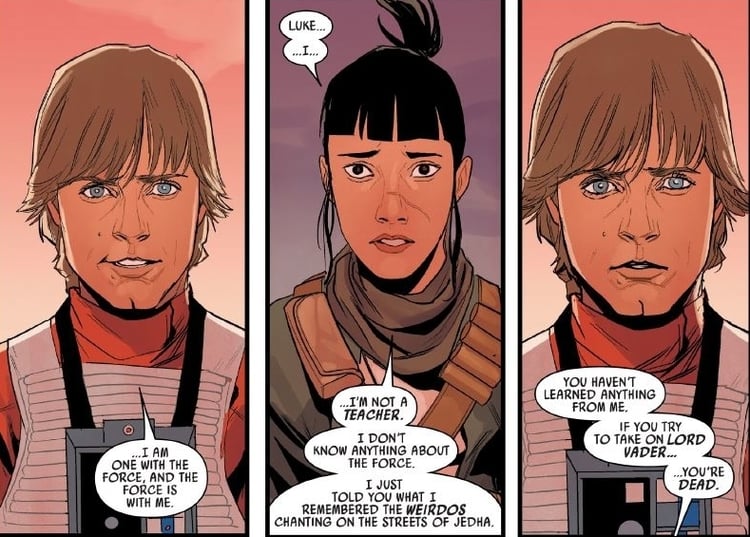 C-3PO and Chewbacca are racing against the time to save themselves and the rock people since the remaining detonators are soon to explode. However, as it turns out, the rock people have a history with the “flesh” a.k.a. humans which enabled them to stop the machines made by them by generating electricity. The only problem, this method would stop not only the detonators but C-3PO as well. C-3PO accepts his fate, happy to have been of service. But, electricity of the rock people is not the only thing at play on K43, one must not forget Vader. As the rock people destroy the detonators, Vader frees himself from the underground where he was pinned by natives. Carrying C-3PO, Chewbacca reaches the surface where he sees Luke’s X-wing landing because both his ship and R2 have lost all power. As Luke disembarks from the ship, his is faced with sinister figure emerging from the dust. 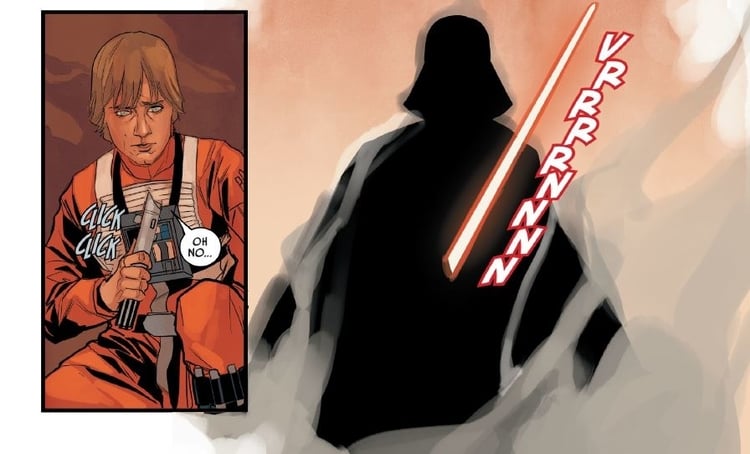 Before Vader can engage Luke, he is attacked by mighty Chewbacca. And Wookiee is truly mighty which is what I believe we should have seen more often in the movies, however his opponent is Vader and things do not looks good. 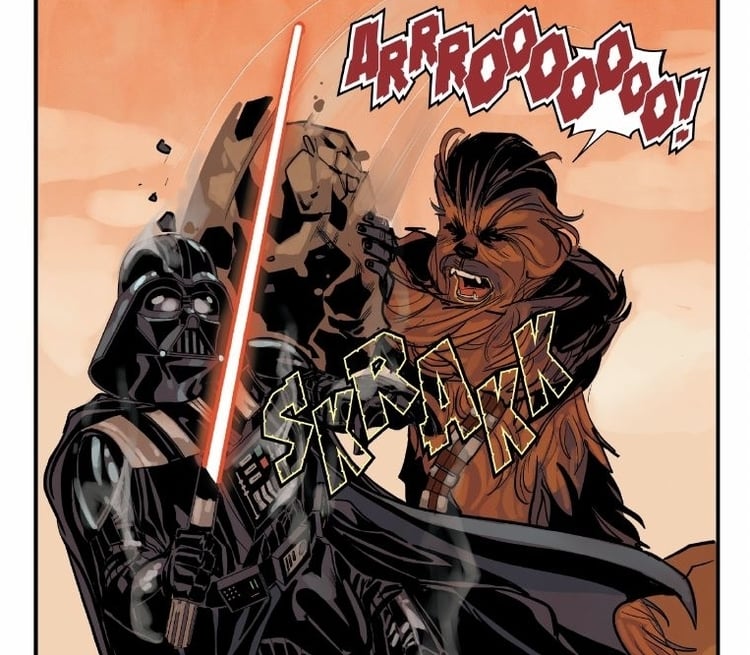 Rather than talking just about this issue, I would like to address this entire “Rebels and Rogues” arc since it and the entire comic run are soon coming to a close. It’s hard to invent the wheel when we know where is story ultimately going. However, I think that Greg Pak did a couple of things very well: he separated our protagonists and gave us some new and interesting characters.

The separation of the protagonists gave us the most interesting interaction between our main characters, namely between Chewie and 3PO. From the beginning, this series was very generous towards C-3PO in general, highlighting his contributions to the Rebellion that go beyond his translation services. But pairing the fussiest character with the one of the most reliable was truly golden, showcasing both their abilities and strong points.

But, frankly, I was most pleasantly surprised by the new characters. I did not expect to like Leia’s former flame Dar Champion as much as I do. I admit, I was biased. All too often, the rival of the protagonist turns out to be a scumbag just so the protagonist could have a guilt-free path to their love interest. But, Pak avoided that trope. Dar is handsome, courageous and honest, but also not a pushover and a man with his own goals and ambitions. Additionally, he has a sense of humor which is an asset when you are dealing with Han Solo. His insight in Han and Leia’s relationship and his exasperation at their obliviousness was truly entertaining.

Warba Calip is another interesting addition to the canon, a Force-sensitive native of Jedha, observant and cynical, plucky, a little bit broken and a potentially a great asset to the Rebellion. I love her character design.

If I have a problem with this arc as a conclusion of the entire run. I’ve reread the entire arc before this issue and it felt that after years of waiting for the story to approach The Empire Strikes Back, it is now suddenly hurtling towards Hoth with the speed of light. And boss Carpo was right. This is the crucial time for the Rebellion, yet the plan is too complicated. We are far from the stage when the Rebellion could make big, bold swings just in case something sticks. This is necessary for survival, so I hoped that we would get a closer look at some people who kept Rebellion going through the years and not just our heroes. Maybe something similar to Twilight Company.

But, as they say, it is not getting what you want, but wanting what you get. And this issue prepares us for the culmination of the comic that needs to do two things beyond any doubt: send our heroes on the clear path to Hoth while protecting the integrity of Vader’s character. Also, is it just my imagination or has Noto’s art progressed since he and Pak took over Star Wars run? He was always a great artist, but it seems to me his art became more relaxed, his characters softer and more natural and I am liking it more than his work on Poe Dameron. Am I hallucinating?

Anyway, before this story comes to an end,

THIS ISSUE GETS 6.5 STARS 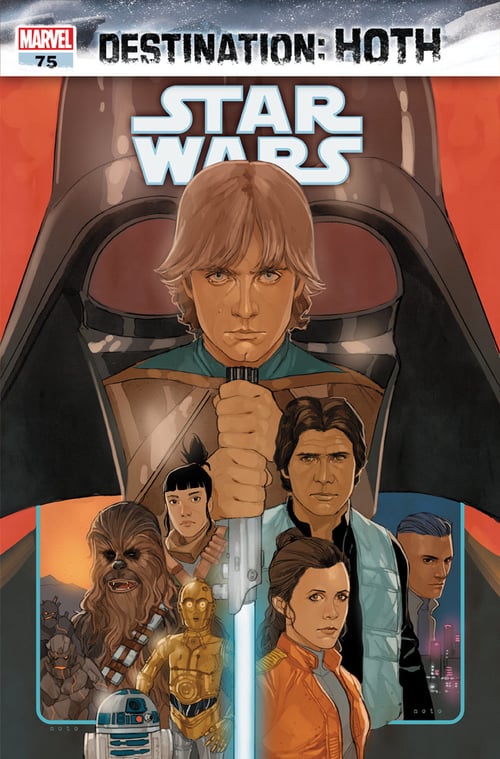