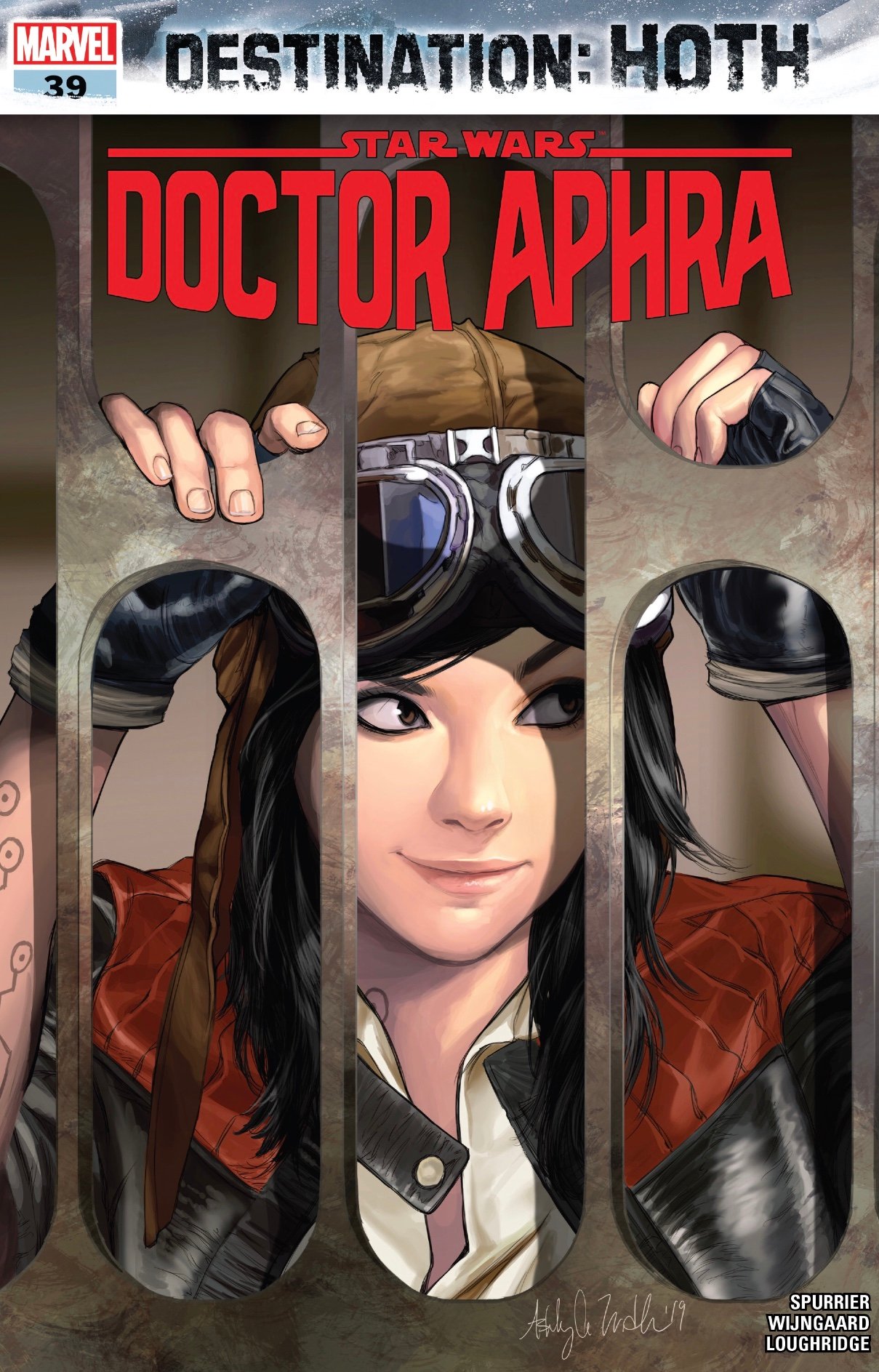 Doctor Aphra returns this week and she is on the move. After her recruitment by Darth Vader, the archaeologist is in pursuit of the location of the new Rebel base. She’s found herself reunited with her father, who she must chose to help or abandon while her former lover Magna Tolvan leads a Rebel squad, hoping to put an end to the doctor’s work for the Empire. Though nothing is ever simple when Aphra and Tolvan find themselves facing off. SPOILERS AHEAD…. 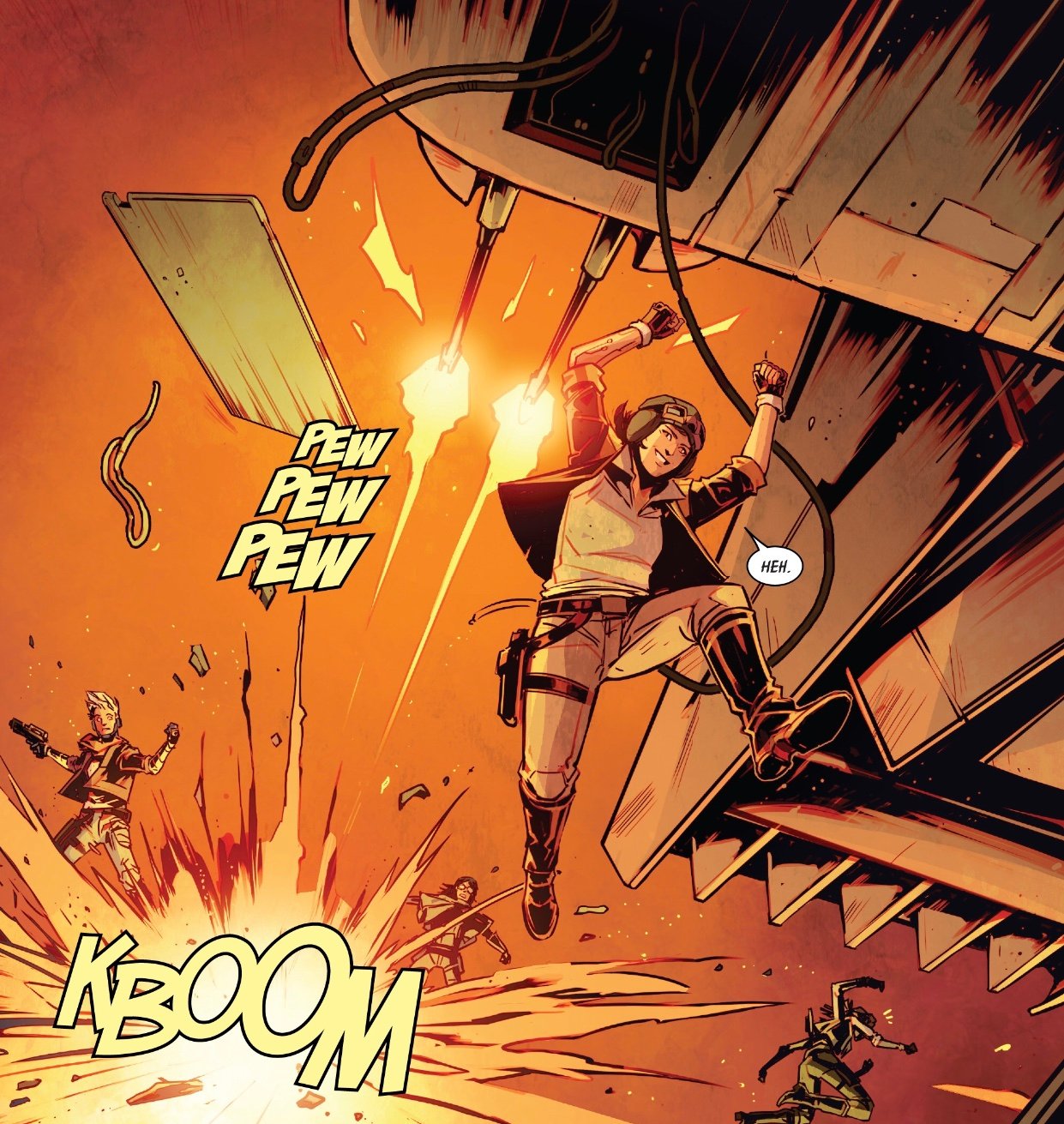 This issue moves pretty fast, with an explosive opening as a cornered Doctor Aphra uses the cannons on the Imperial shuttle to blast open the hangar doors. The threat of being hurtled into the vacuum is enough to distract Tolvan and the rest of her squad, so Aphra makes a break for it. Tolvan alerts the rest of the ship to Aphra’s presence and orders the doctor stopped – even if it means shoot to kill. I don’t feel like Tolvan does this out of personal vengeance, I see it more as her doing her duty to ensure Aphra doesn’t escape. She knows Aphra is working with Vader and the Dark Lord of the Sith is aggressively searching the galaxy for the location of the Rebel Alliance. 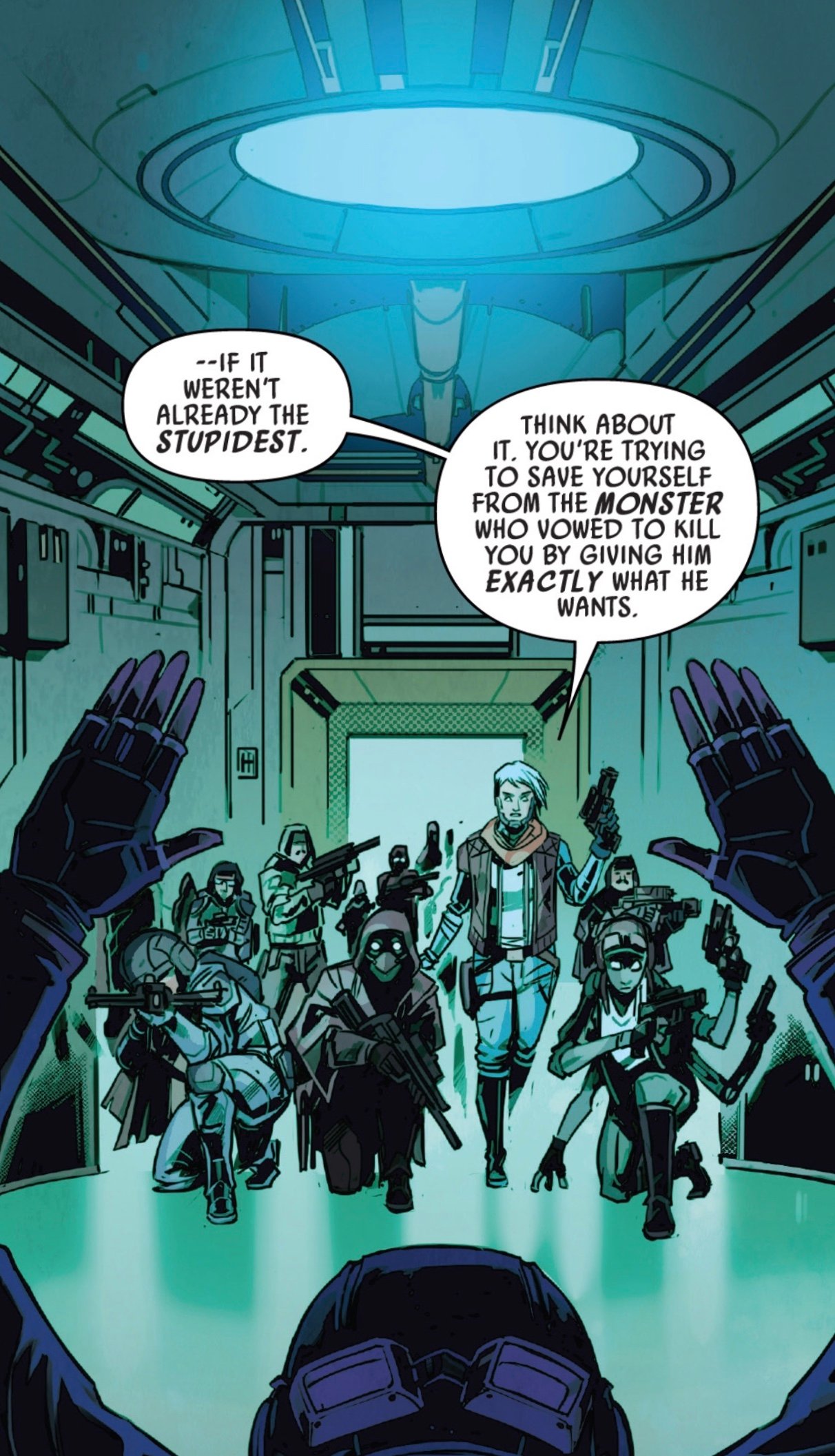 Tolvan loses contact with a droid in their operations room, which leads her to believe Aphra’s made her way there. Tolvan and her squad seem to have Aphra trapped, but she’s tricked them again with a distraction. All she did was put her jacket, hat, and goggles on Tolvan’s droid, disabling the his vocalizer. Aphra’s able to make her way into the conduits running through the ship. She contacts BeeTee and recruits the murder droid to help get her dad to the Imperial shuttle, since the rest of the ship is busy tracking her down. The little droid needs little convincing when it comes to unleashing violence and havoc on the Rebel Alliance. 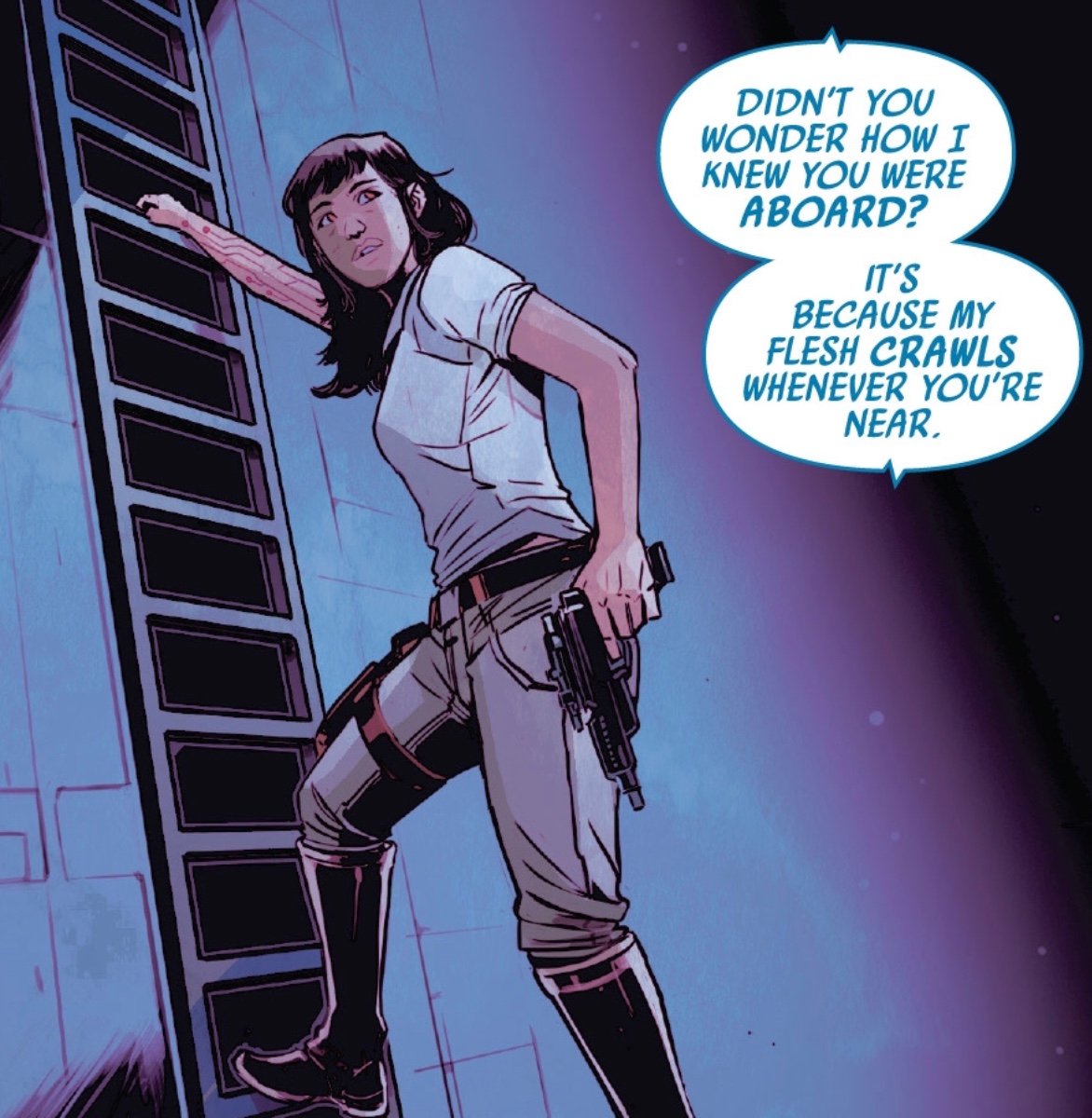 Aphra’s beginning to realize she can sense Tolvan’s thoughts. When Tolvan catches up with her they realize they are bonded by the matching electro tattoos they used to escape Accresker Jail. Aphra can sense Tolvan’s burning anger, and rightly so. At this point, it would be hard for Tolvan not to feel used and discarded by Aphra. There are still undeniable feelings between them and this bond only underscores that, but right now Tolvan is angry. I love the theme of ” bonds” between strong characters, giving each of them an intimate window into each other’s minds, whether through the Force or electro tattoos. 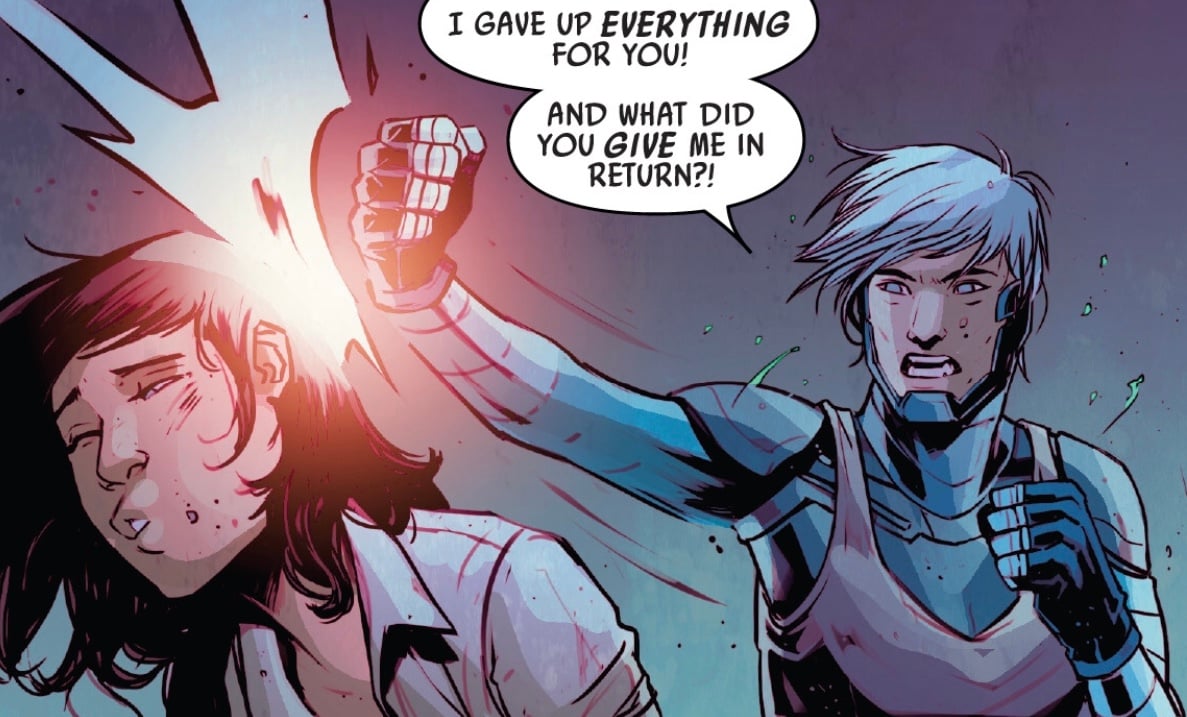 This is a very powerful exchange between Tolvan and Aphra. In addition to the physicality of it, Tolvan really lets Aphra have it. I’m so happy Tolvan finally gets to vocalize the distress of Aphra’s toying with her. Usually Tolvan doesn’t get a chance to process her emotions, it’s mostly just right back to work. Seeing Aphra really opens up a release for her and I love how writer Simon Spurrier handled it. Love is a complicated thing, especially as the one she loves continues to demonstrate she’s not afraid to be her enemy. Aphra gets a chance to open up, too. As Tolvan expresses how much the Rebellion has helped her grow for the better, Aphra can feel these sentiments are true. Aphra is critical of Tolvan, saying she should be free from any fight, whether she’s with the Rebellion or the Empire. Aphra challenges Tolvan to look into her mind and hear her thoughts. And she does. 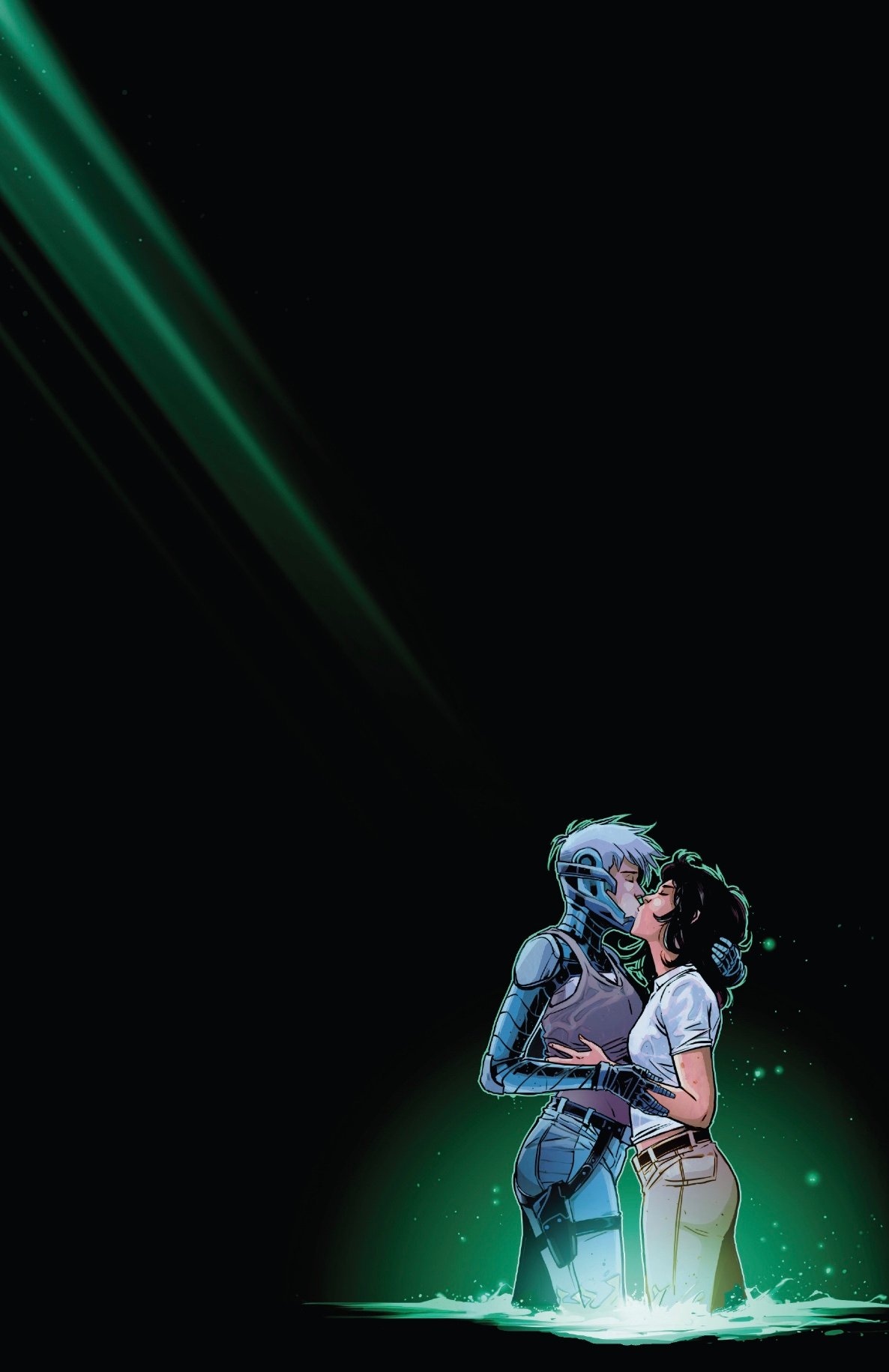 Wow! What a beautiful moment from artist Caspar Wijngaard and colorist Lee Loughride. These two are destined to be together, I think we all know it, but unfortunately it’s still going to take them a while to get there. After they sleep together, Aphra wakes before Tolvan and begins her departure. Before Aphra goes, she makes one more connection to Tolvan’s mind and learns the Rebels are headed for Hoth. Tolvan awakes just after Aphra takes her leave and realizes, once again, she’s been left behind.

Tolvan makes her way to the bridge and discovers all the escape pods have been launched, giving Aphra a perfect opportunity to launch the shuttle and use the obstructions for protection. As expected, the Imperial shuttle carrying Aphra’s father and BeeTee launches and jumps to hyperspace. Tolvan reveals a tracker had been placed on the shuttle, so the Rebels get underway to intercept it. Once they’re gone, we find Aphra sitting snug in one of the escape pods, accompanied by BeeTee, remotely piloting the shuttle carrying her father.

The shuttle lands on Ash Moon I, where Aphra’s ward Vulaada was last seen. Remember, Aphra left her there to undertake this mission, in what I assumed to be a protective action. Aphra cares for Vulaada, and comparatively with Tolvan, the doctor tries to protect the ones she cares about by taking on all the risk herself. Now, she’s sent her father there, most likely so she can rejoin them when this is all done. A large, indigenous beast on Ash Moon I takes notice of the Imperial shuttle’s abrupt landing, just as Korin Aphra and Vulaada meet. Looks like they will have their hands full right away in the next issue. 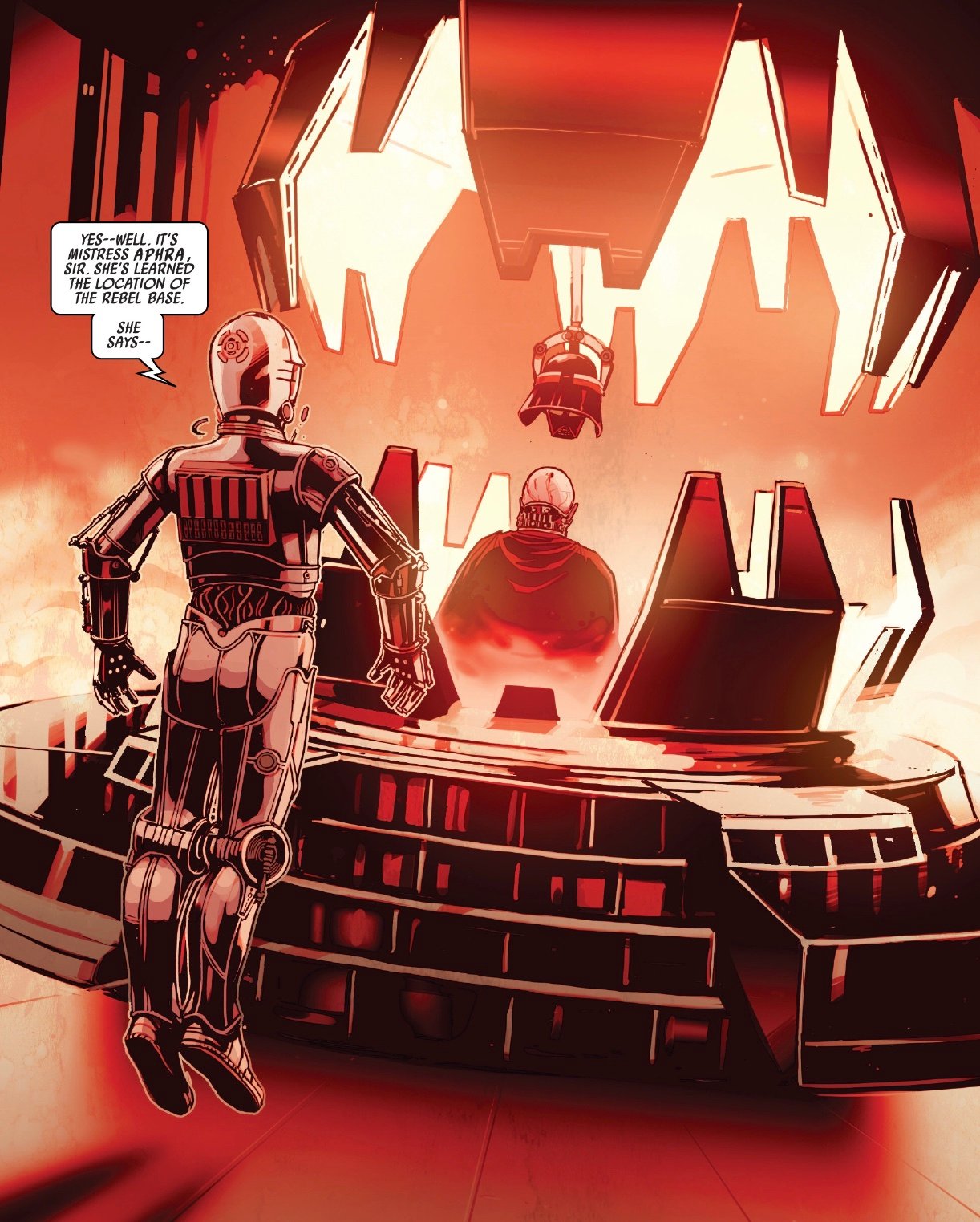 Aphra makes contact with Triple Zero, preparing to deliver the location of the Rebel base to Darth Vader himself. We are left hanging as to whether she does, but I’m assuming something has to happen to avoid Vader finding out about Hoth. Or, maybe she’s going to tell him and he’ll doubt her – or, that could be the moment the Empire dispatches a probe droid to Hoth and that’s why he concludes the Rebels are on Hoth so quickly in The Empire Strikes Back. There’s only one more issue left in this series, so I have a feeling we are in for quite a juggernaut of a conclusion.

Writer Simon Spurrier blew me away with this issue. In my opinion, it’s everything I look for in a great issue of Doctor Aphra. Intimate character moments, the uncertainty of love, and Aphra struggling with her morality. Like I said, I’m just ready for Aphra and Tolvan to live happily ever after, but I know it will be a while before they get there. I’ve grown to love these characters so much, and while I look forward to the upcoming series, I’ll certainly miss this one. It’s issues like these which have made me love the character. I doubt I’m alone in thinking Aphra shines and will continue to do so for a long time. 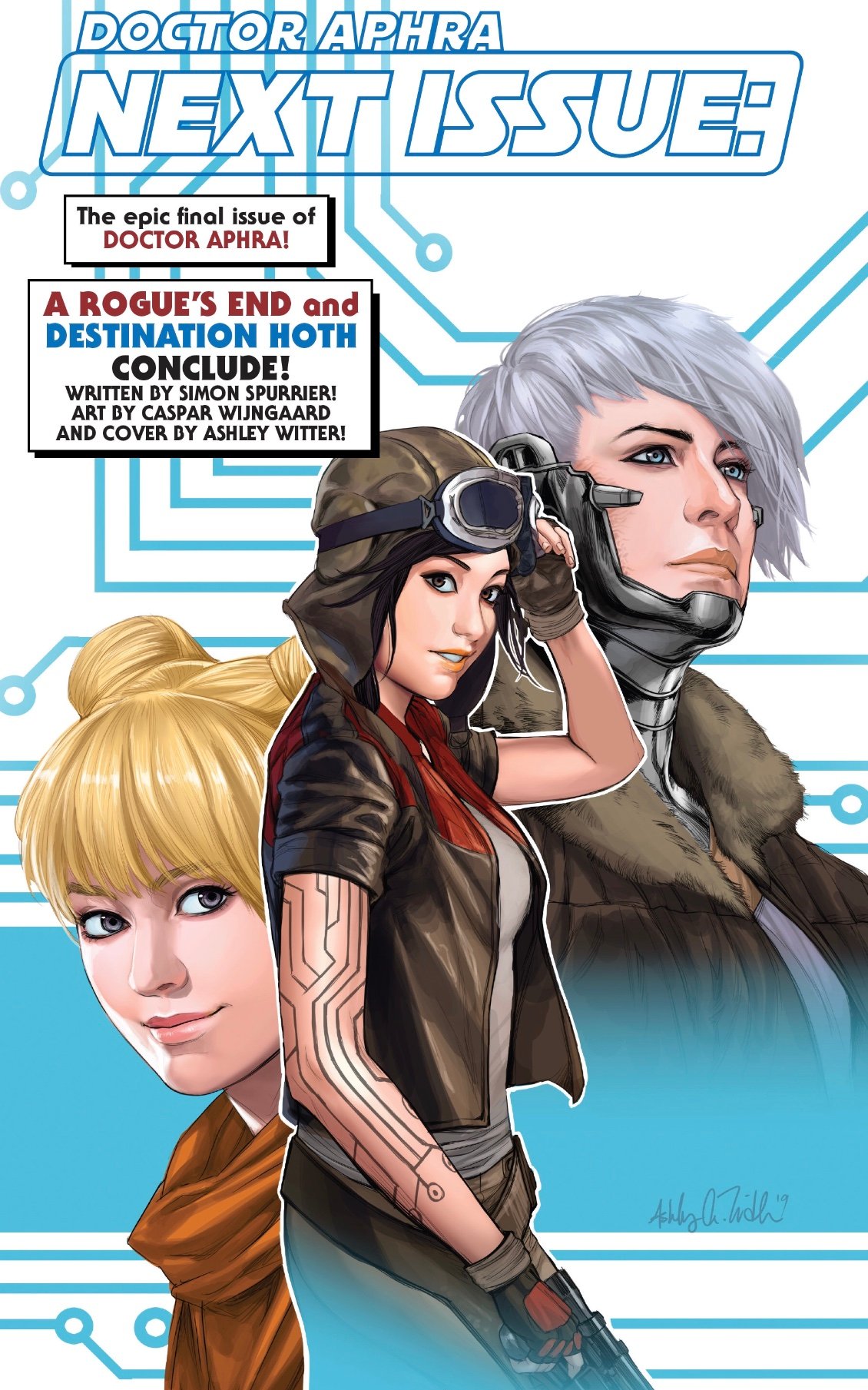