The Mandalorian: Dave Filoni on the Choice to Create IG-11 Over Using IG-88 - Star Wars News Net Go To Top
Skip to content

The Mandalorian: Dave Filoni on the Choice to Create IG-11 Over Using IG-88 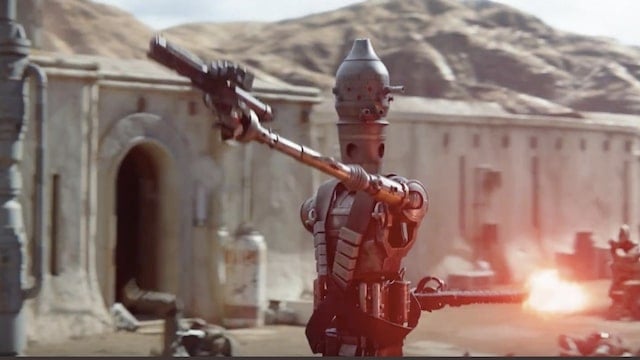 Since the initial announcement of the new Disney+ Star Wars series The Mandalorian, there has been plenty of speculation on how the series would connect to the greater Star Wars universe. Fans have been actively looking for clues and information regarding the cast of characters and plot. So last December, when Jon Favreau posted a photo to his Instagram account of a rather familiar looking droid, fans immediately assumed it was IG-88.

Well as is turns out, this was more subtle misdirection than confirmation of the memorable assassin droid showing up in The Mandalorian, as it was later revealed Taika Waititi would be voicing IG-11, a brand new character created for the series. Like his droid counter part, IG-11 is also a bounty hunter, but is described by Waititi as innocent and naive, if not also a bit trigger happy.

During their exclusive first preview of The Mandalorian, IGN had an opportunity to speak with Executive Producer Dave Filoni on the decision to create a completely new character for the series rather than relying on an existing character in the universe.

“For me, working on Star Wars so long, I tend to like to lean towards creation of new characters. I love and respect the old characters and the classic characters – and sometimes I think maybe I’m a bit too reverent with things – but I like areas that are undefined now. Like my experience creating Ahsoka [Tano for Star Wars: The Clone Wars] in a space that was fairly well defined between two films, and yet we were able to land and add a valuable piece to that story in the prequels that didn’t take away from any of Anakin or Obi-Wan’s arc.”

Naturally, IG-88 already has a rather rich history thanks to the Expanded Universe, or “Legends” as it’s now called since the Disney purchase of Lucasfilm.

“So a droid like IG-88, if you know the Expanded Universe and the Star Wars history, there are a lot of stories around him or what might’ve happened to that particular droid. So out of respect for people that have been with this franchise a long time, it’s like, ‘well if we do something with this space, would that be contradicting those stories?’ So it’s better just to say ‘Well, there’s other droids,’ it’s not like it was a unique assassin droid. And then we have a little more free range. I mean, people forget in Empire, you never even see him walk or take a step – the prop was actually bolted to the floor. So just giving him feet was something new and original. But yeah, I just gravitate to the open field that you get with new characters, and then we you do bring up something, if you choose to, like when we brought Obi-Wan finally into Star Wars Rebels, I think it becomes significant and special.”

Personally, I agree with Filoni regarding the creation of new characters in the current available spaces in the Star Wars universe. Being respectful to the Expanded Universe and rich history of Star Wars, canon or not, is important for both those of us that have been with the franchise for a considerable amount of time as well as the legions of new fans joining the ranks. Are you excited for a new assassin droid in The Mandalorian or are you a bit disappointed the fan favorite isn’t returning?

The Mandalorian premiers on November 12th when Disney+ finally launches this November.