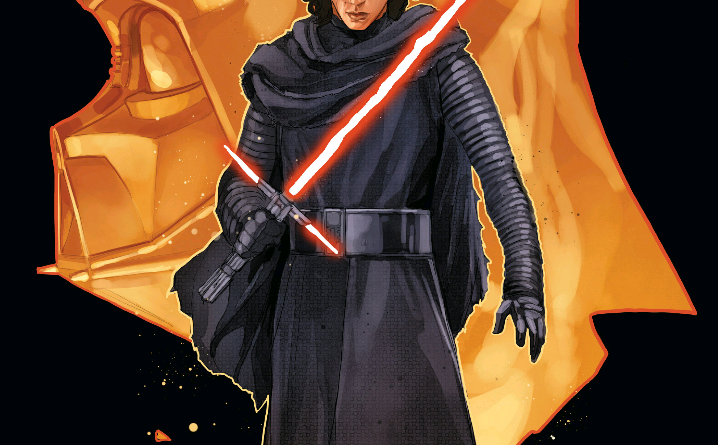 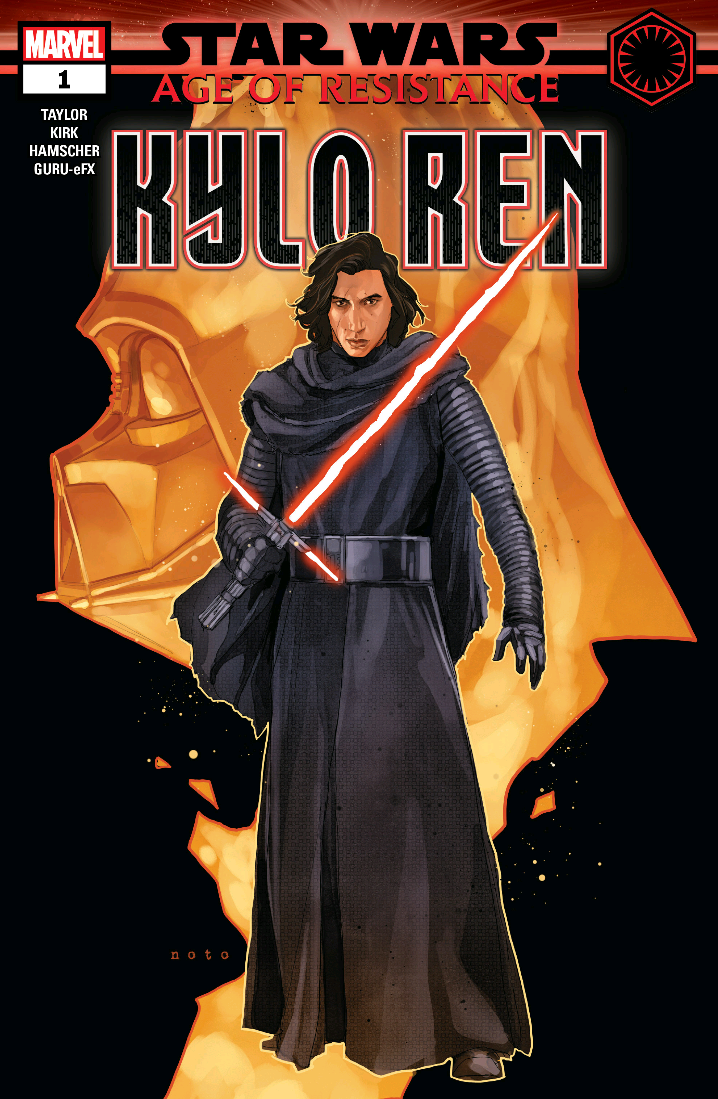 The past few issues of Tom Taylor’s Star Wars: Age of Resistance have been some of the most entertaining Star Wars comics since Marvel took the reins back from Dark Horse almost five years ago. After a couple of top-notch entries featuring General Hux and Supreme Leader Snoke of the First Order, Taylor brings the anthology series to a close with Star Wars: Age of Resistance – Kylo Ren #1. This issue is probably my favorite in the mini-series, and looking back on the best issues of the series, it’s easy to see the reason why. One reason…one name…Kylo Ren.

Part of what made the Hux and Snoke issues so engaging to me as a reader was how Ren was incorporated into the story. Hux highlighted the strife in Ren’s relationship with the First Order general and Snoke gave readers a glimpse into the vulnerabilities beneath the Kylo Ren persona that he keeps hidden – the vulnerabilities that belong to the boy he used to be – Ben Solo. With Kylo Ren, Taylor and artist Leonard Kirk focus solely on Kylo Ren as we follow the rising darksider on his quest to eclipse the legacy of his grandfather with a story of his own. Ben Solo is notably absent from this issue, however, as the immensely powerful Kylo Ren takes center stage, and honestly, it’s an absolute blast from start to finish. Spoilers ahead… 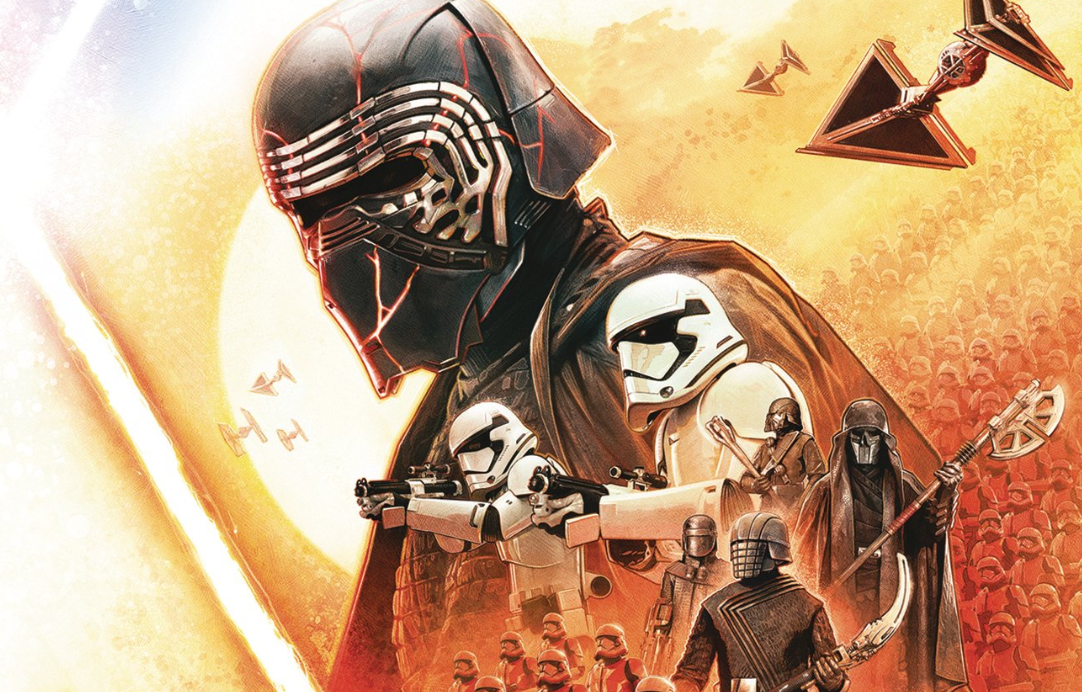 Before we dive into the story, I want to point out that there are not any huge reveals in the story, nor is there anything much for lore junkies to grab ahold of and discuss for hours on end. But that doesn’t make this issue any less entertaining or impactful. As anyone who’s seen The Last Jedi knows, Kylo Ren is poised to be the main villain in the final chapter of the Skywalker saga this December. Granted, we have strong reason to suspect that the Emperor will be making his return, but in practicality, Ren is indeed the main villain of the saga at this point. Fans of the character also know how complex he is both mentally and emotionally. We’ve seen his power, sure, but we’ve also had front row seats to witness just how unstable and vulnerable he really is. Just like his cracked helmet and his raging crimson blade, Ren is a character constantly on the verge of blowing up and falling apart at the seams. 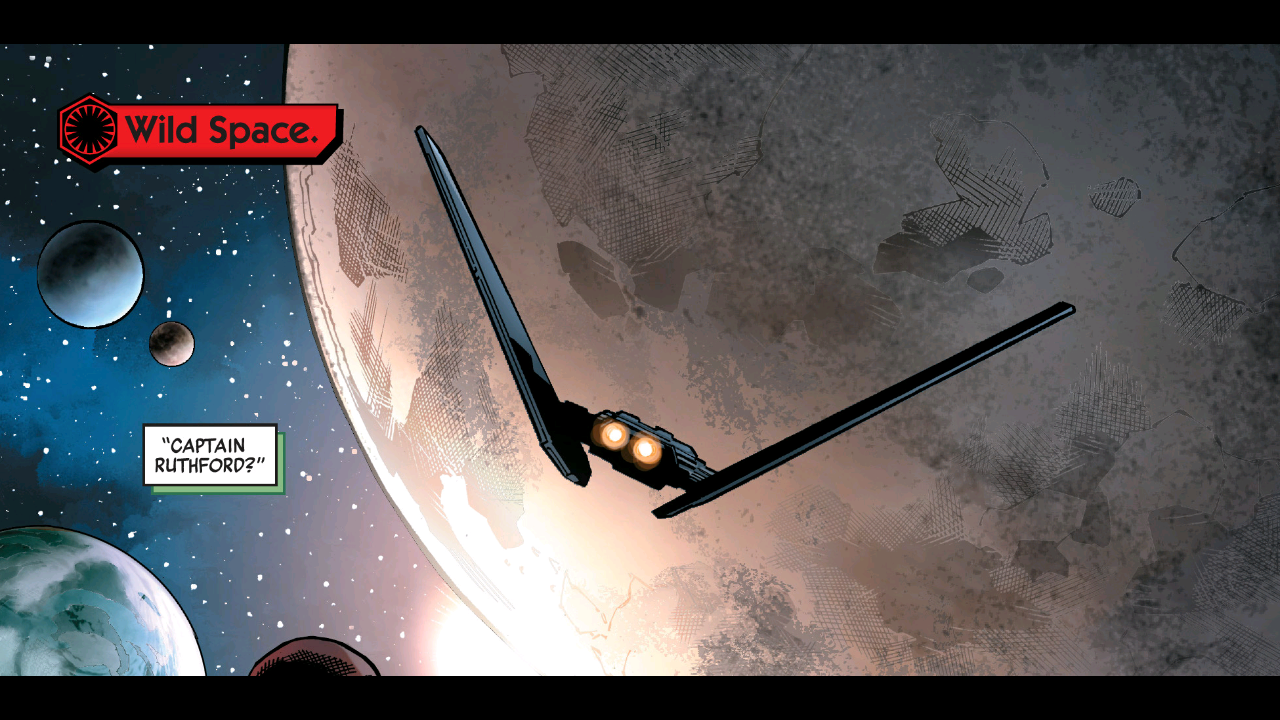 One could definitely argue that this makes him more interesting, but as he is the guy who will be leading the First Order against the Resistance in The Rise of Skywalker, it was refreshing in this issue to see him in his element – to see the real potential that Snoke saw in him fleshed out before our eyes. This issue gives us just that. Though the shadow of his grandfather looms large over his own budding legacy and you still get the sense that “Ben” is just beneath the surface waiting to emerge in a moment of weakness, the cracks never show in this issue as Kylo Ren goes full Vader on an unsuspecting alien race in wild space. 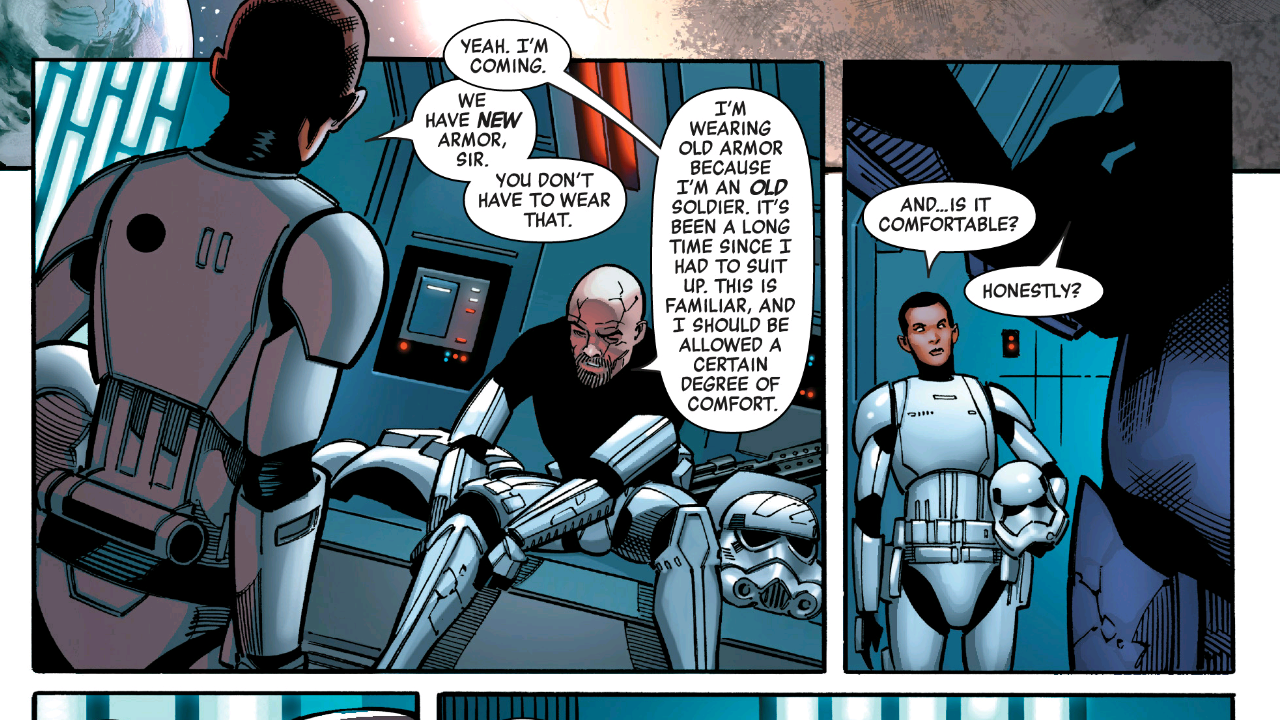 The story begins with Captain Ruthford, an old stormtrooper from the Imperial era suiting up in his classic armor. This ex-trooper is now a captain in the First Order, and Kylo Ren has tasked him as an advisor on his mission to subdue the Benathy people and subject them to First Order control. Ruthford was chosen to accompany Ren for one reason: he was the only soldier left from Vader’s mission to subjugate the Benathy under the Empire years before. Vader had prevailed against them, but at a cost. Thousands died on both sides, and if he can convince Ren to listen to reason, maybe he can avoid the unfortunate situation of history repeating itself. Since the Empire’s fall, the Benathy have thrived, even expanding their own empire to a few nearby planets, and for this reason, their mission of conquest must be brought into check if the First Order is to dominate the galaxy. 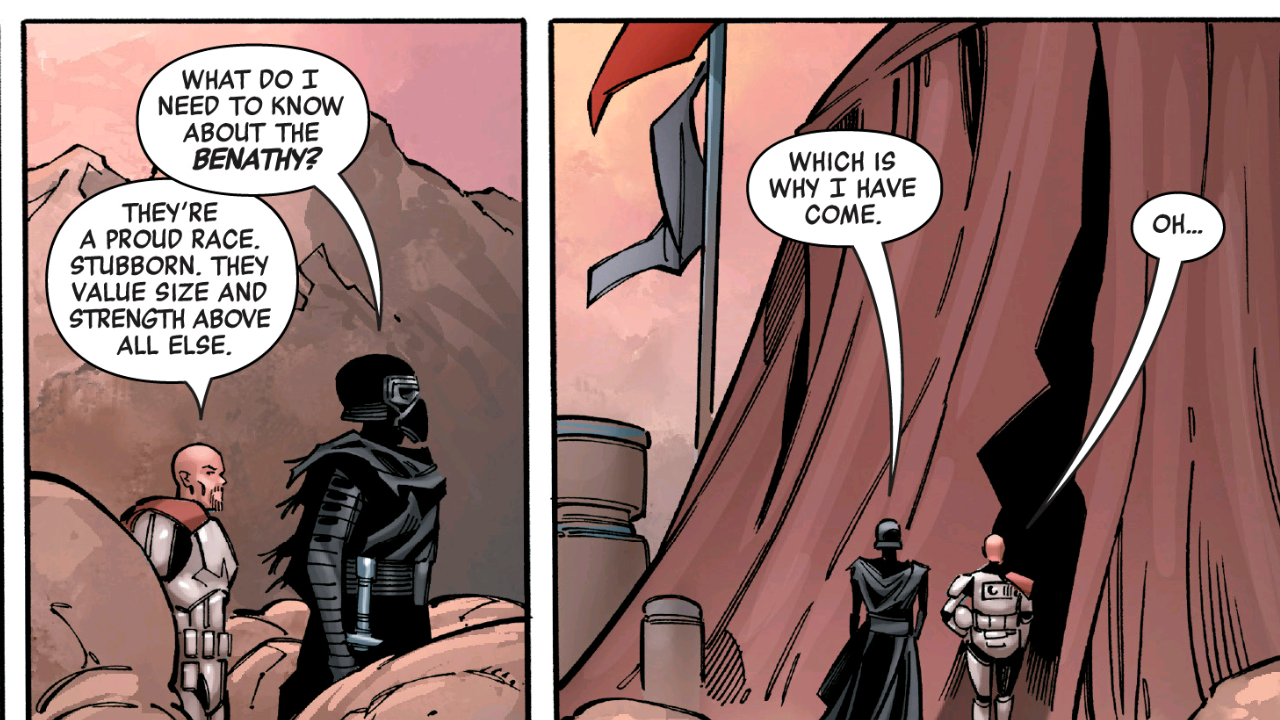 As the two of them make their way to the meeting with the Benathy king, Ren asks the captain what he knows about the alien race. He tells him that they are a proud and stubborn race, valuing size and strength above all else, and once you see them, the reason for that value becomes evident. Ruthford quickly sees that he has his work cut out for him with Kylo Ren. The young man may be powerful, but his youthfulness brings an ambition that the captain no longer has the stomach for. Ren looks out on the ghosts of Vader’s conquest and sees a glory that he himself could also achieve. The captain looks to the past and only sees lives wasted. But ambitious though he was, perhaps he would still listen to reason. 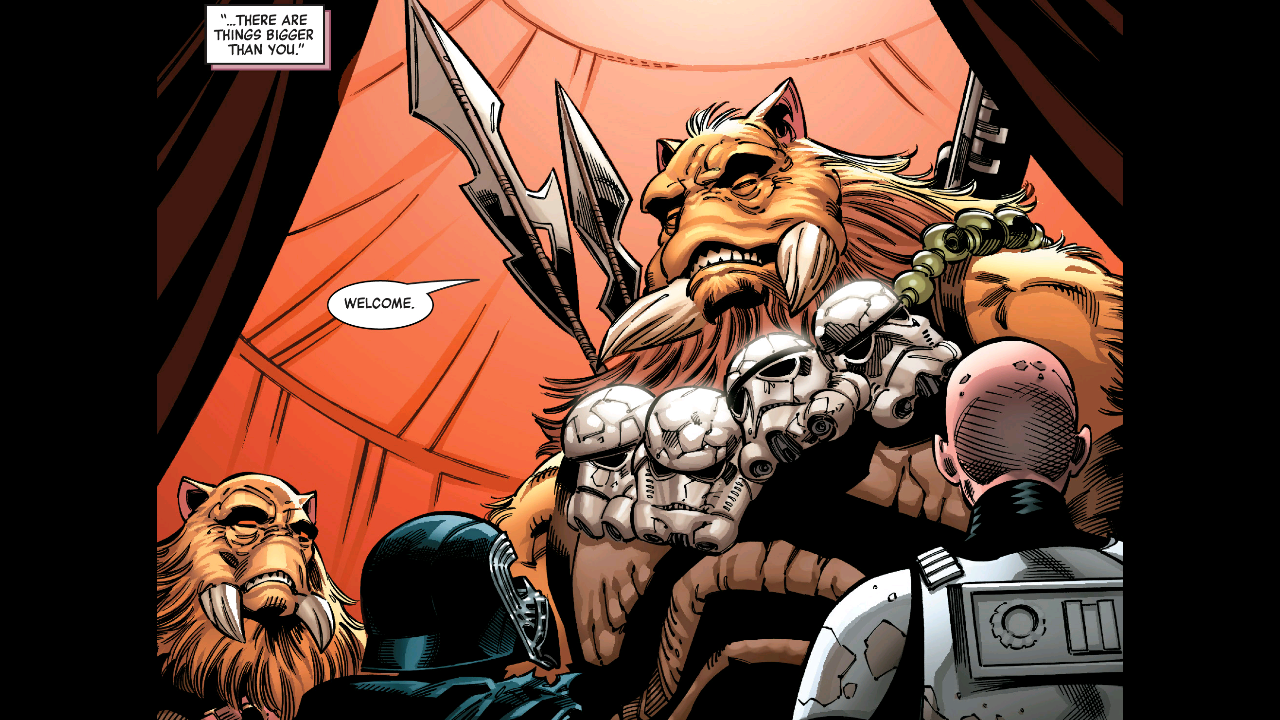 At the gathering, the Benathy King, Kristoff, invites Ren to take a seat, an obvious show of superiority that Ren sees through from the beginning. The darksider refuses to take a seat, pointing out how the giant king was trying to make him look like an infant in the huge chair. Kylo Ren was not some circus oddity come to appease them, and he made it quickly known that he wasn’t having any of it. At this point, both of them decide to dispense with the pleasantries and get down to business. 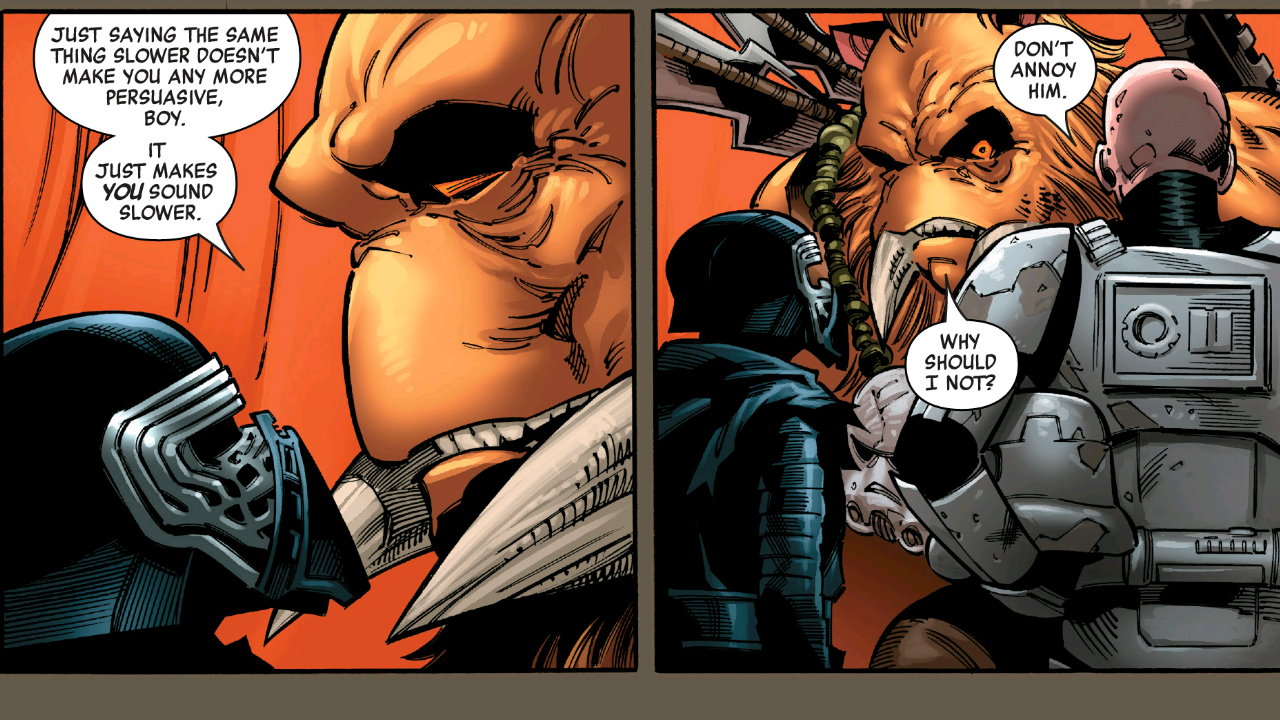 The king remembers when Vader came to subjugate them years before, and he challenges Ren with the fact that although Vader had killed their king and subdued them, he couldn’t defeat their god. He may have beaten them down in battle, but the people got back up. This simple statement was enough to convey his point – they were a strong people before Kylo Ren showed up, and they would be strong long after. This new imposter to an old legacy would fail to conquer them completely, just as the the former had done. But Kylo Ren was not one to be intimidated. He had already set his mind on succeeding where Vader had not. He would conquer these people. He would destroy their god, whatever it may be, and he would exalt himself in its place. 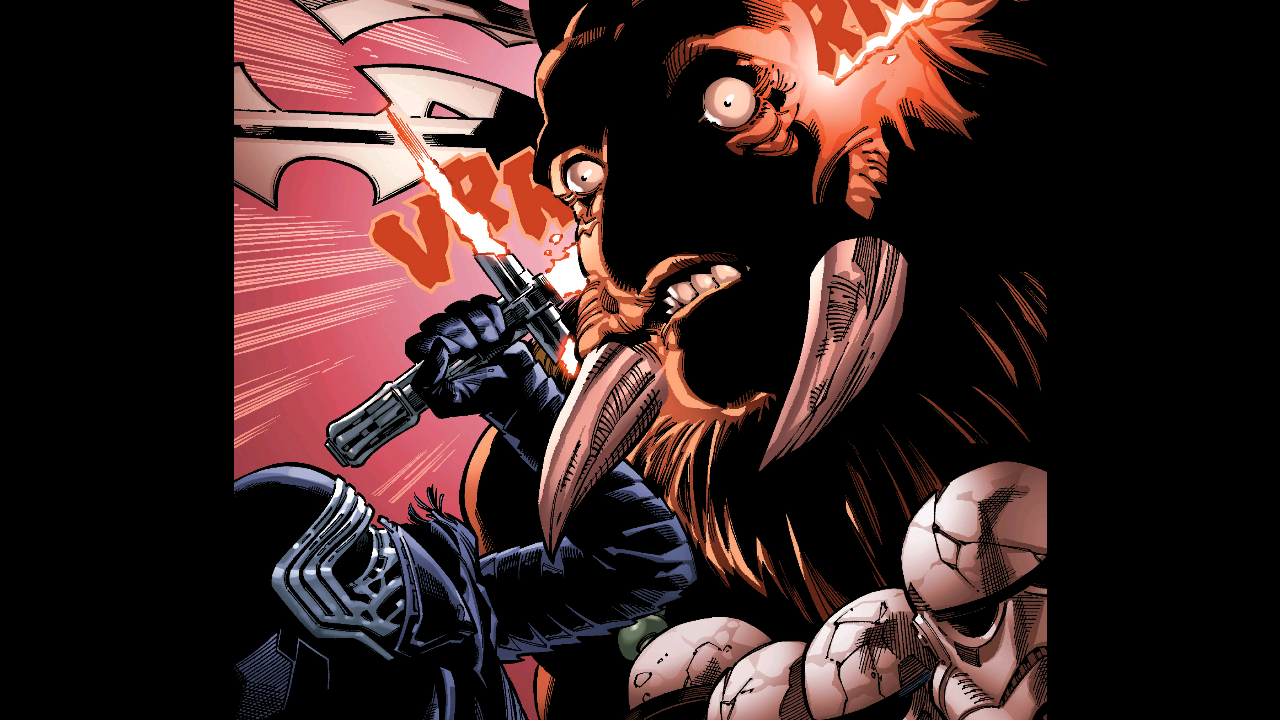 It soon becomes clear that the king could not be persuaded through common discourse, so Ren resorts to Force-boosted persuasion. Unfortunately, however, the king was no weak-minded simpleton. He mocks Ren for his tactic, but he missteps when he chooses to insult the young man one time too many. Ren is done talking. Igniting his fiery blade directly into the king’s massive skull, he then turns to the others, making quick work of them all with his fierce skill in combat. 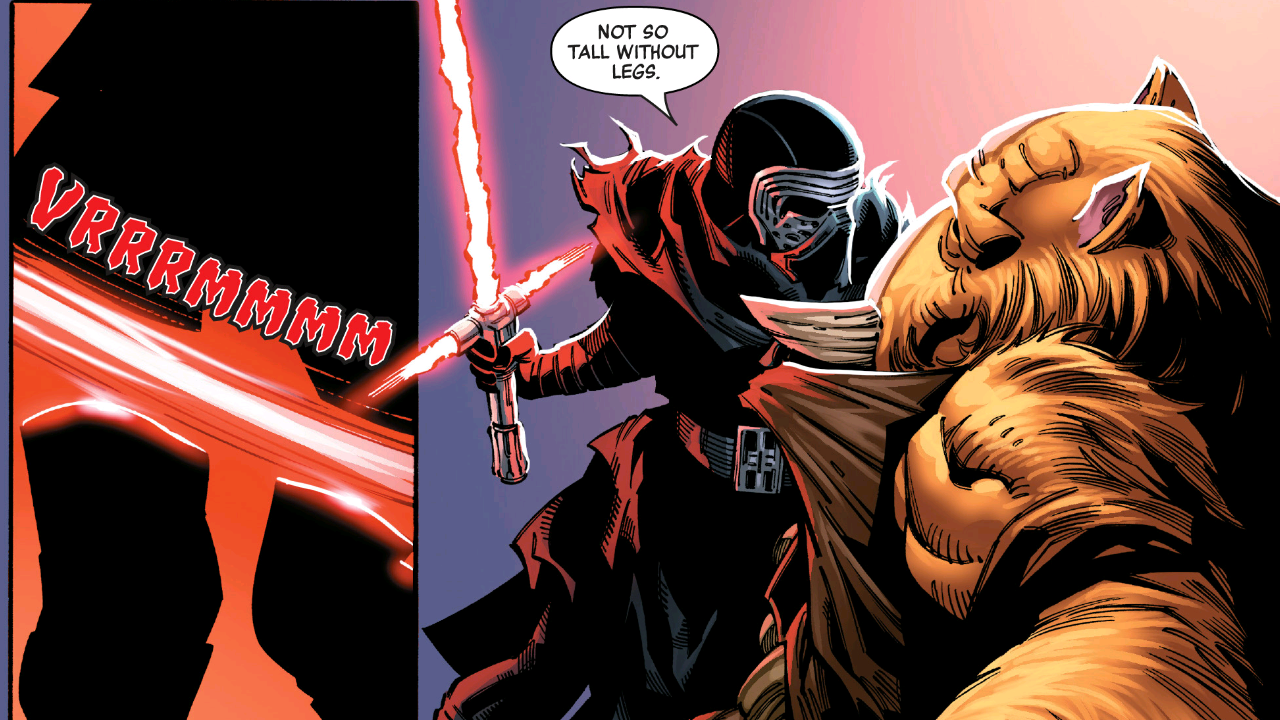 Leaving the tent, Ruthford reminds Ren that this was supposed to be a negotiation and that negotiations are difficult to be made with the dead. But Ren is not phased by this reality. To him, it just meant that no one could object to his demands any longer. With their leaders dead, the people rise up against the First Order. Facing a repeat of the massacre from years before, the captain urges him to retreat, but Ren has come too far to back down now. He would fight as Vader had, and he would not back down until he drew out their god and brought it to its knees. 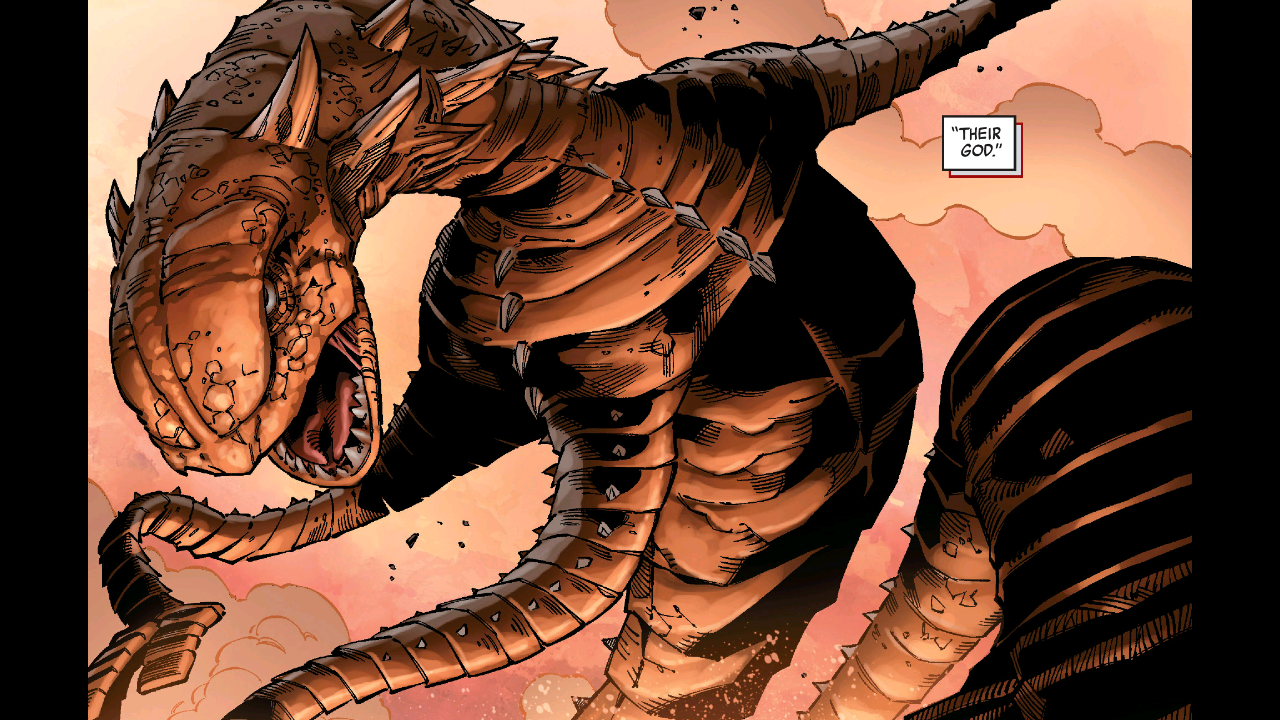 Soon, the diety arrives in Godzilla-like fashion, and fans of the Clone Wars series may recognize the “Zillo Beast” as a similar creature appeared in a couple of episodes in the back half of the show’s second season. The captain once again expresses his doubt, calling out the unbreakable nature of the beast. But Ren knew that everything could be broken, and he would be the one to bring the beast down. 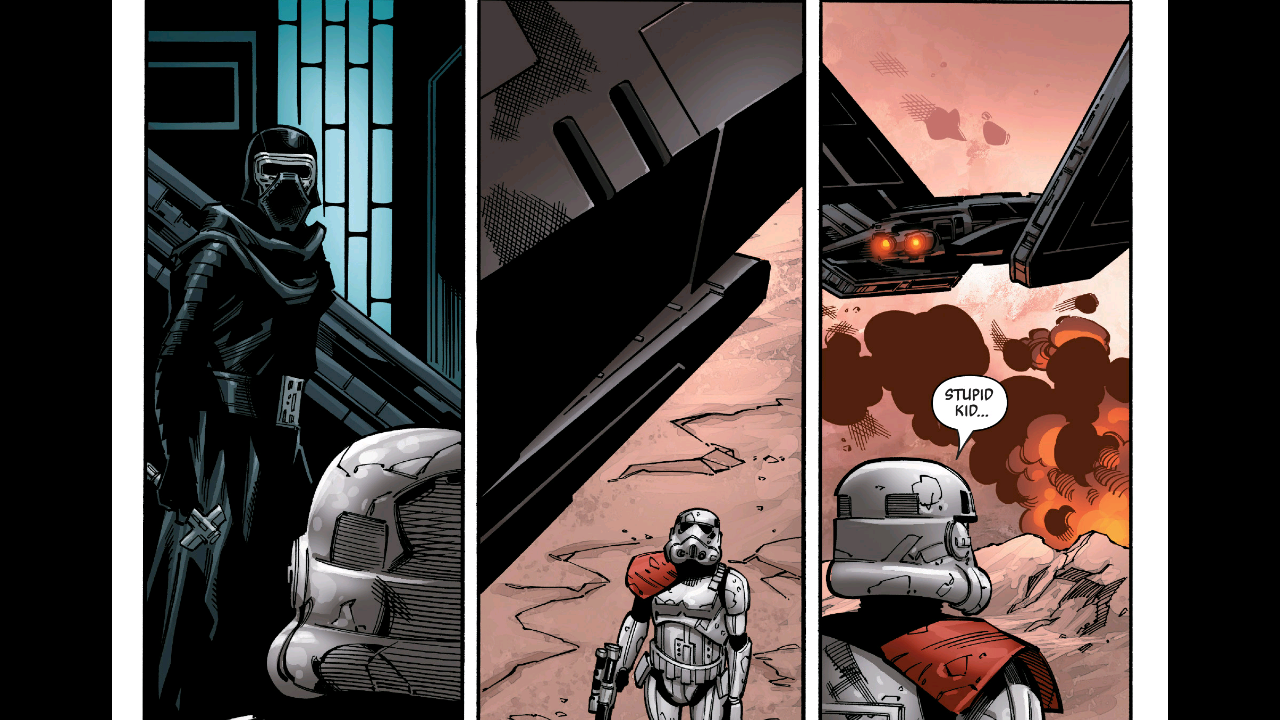 As Ren hurries to his shuttle, the captain attempts to give him one last piece of advice. He can’t prove anything to a dead man. Vader was gone, and there was only Kylo Ren. The shadow he lived in was only one of his own making. But when he continues to board the shuttle anyway, the captain is through trying to convince the foolhardy young man and gives him over to his own stupidity. Soon, the old captain would see that he may have underestimated the young man’s skill and determination, but initially, it’s evident that Kylo Ren has become yet another wasted life when the boy leaps into the mouth of the beast, allowing himself to be consumed. In an interesting turn, we learn that the captain was somehow aware of who Kylo Ren actually was, stating in disappointed mockery that his granddad would have been impressed. 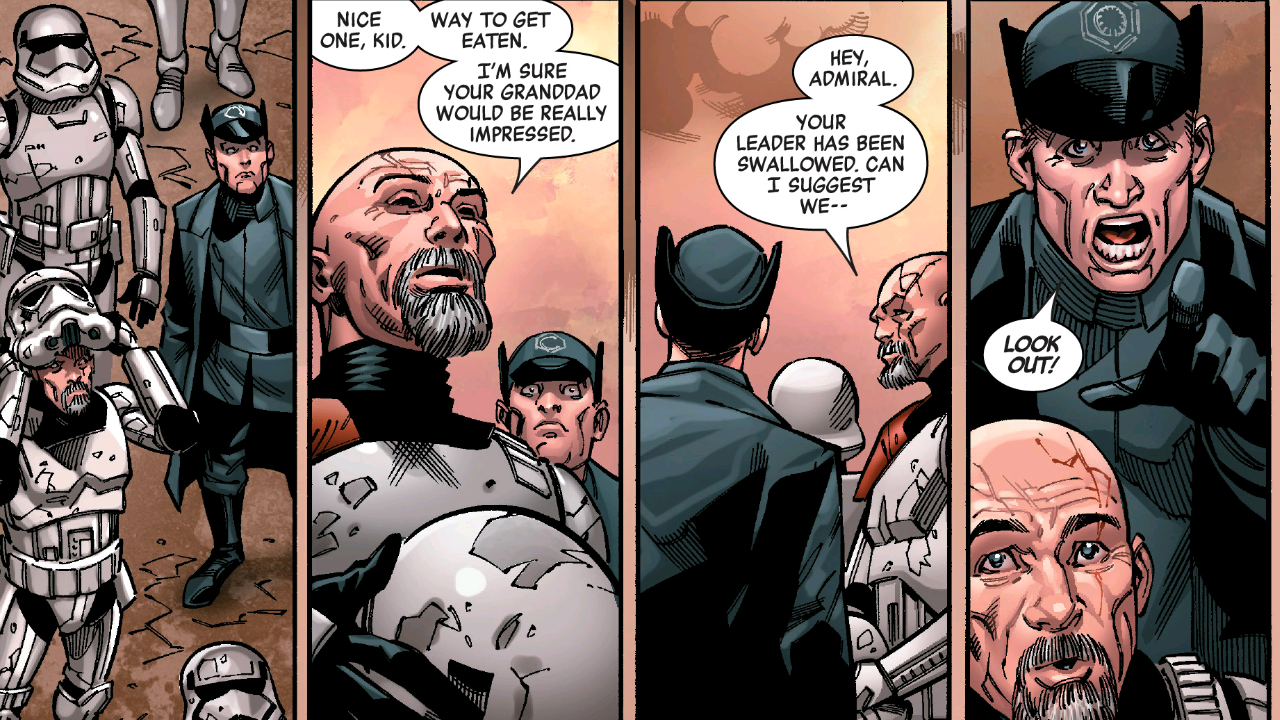 But when the young warrior emerges from the belly of the beast victorious, having killed it from the inside and cut his way out, the captain concedes that he may have judged the boy too harshly. In shock at the death of their god, the Benathy bow before their new diety – Kylo Ren of the First Order. Kylo Ren succeeded where his grandfather had failed, and Ruthford had to admit that if it was a competition after all, the young man had definitely bested his predecessor. 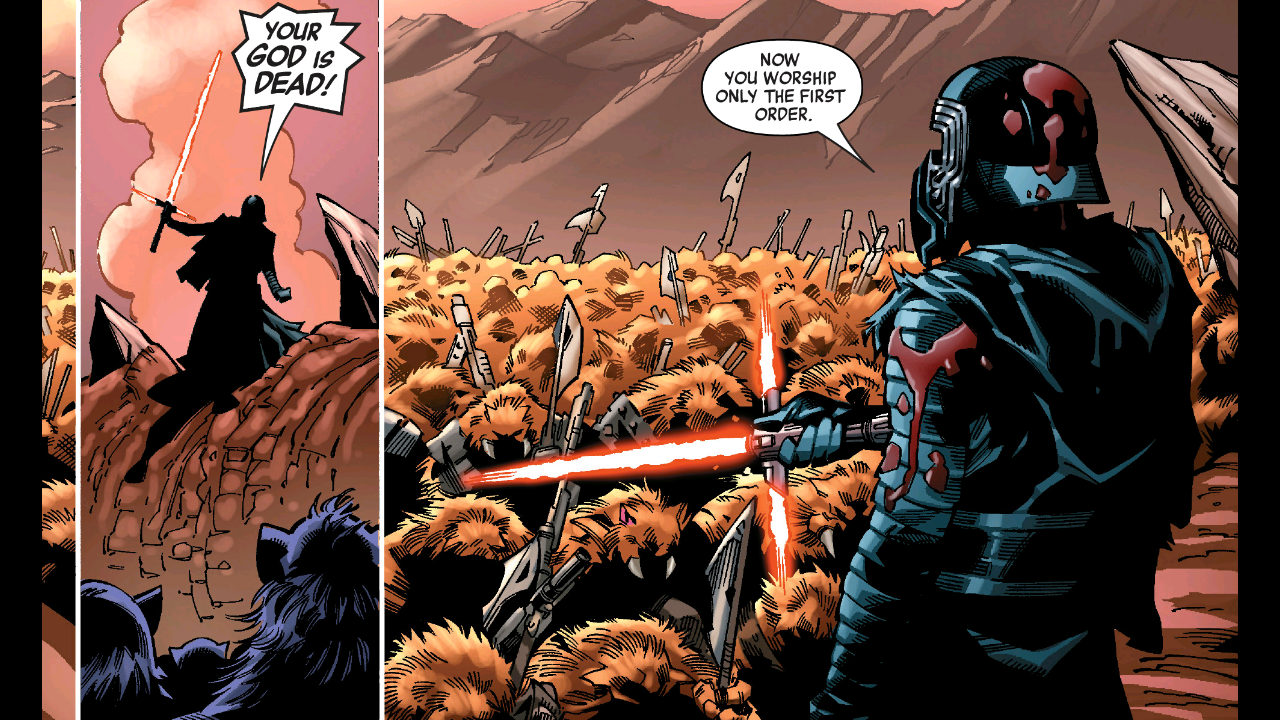 Simply put, this is the Kylo Ren that the franchise needs right now. Granted, there are two sides to him and the other may be a tad more compelling than this one, but going in to The Rise of Skywalker, this is the Kylo Ren that fans really want to see. Charles Soule will give us a deeper look at Ben Solo in December, and that aspect of the character is just as important if not more so, but we also need a real look at his utter villainy, especially as speculation continues surrounding whether or not he will be redeemed in the saga’s finale. I’m personally in the Kylo Ren redemption camp, but this issue definitely went out of its way to add some points for the other team.

Star Wars: Age of Resistance – Kylo Ren is available now in a comic shop near you or online at Comixology. Happy reading Star Wars comic fans! 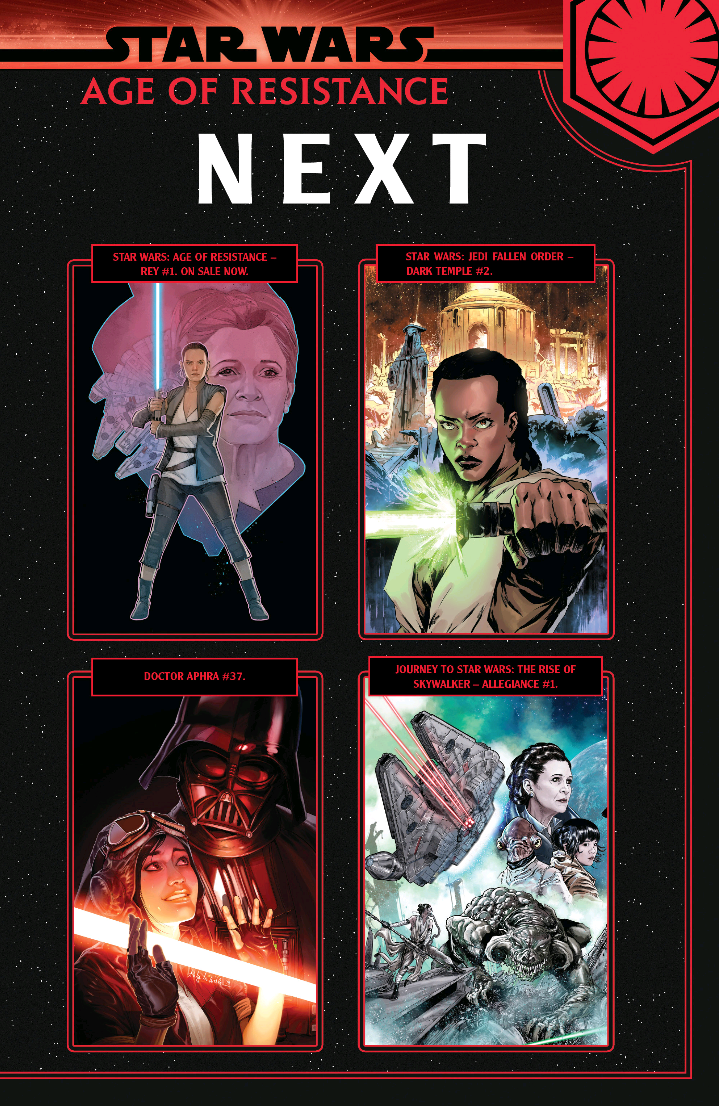 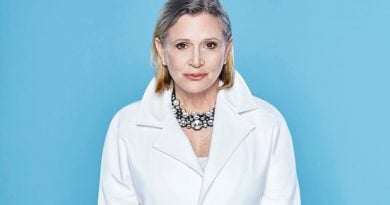 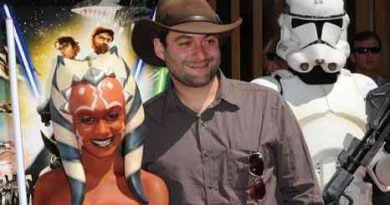 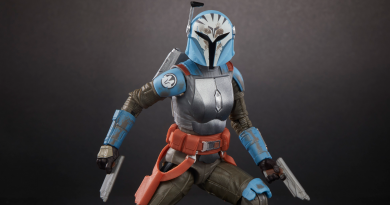