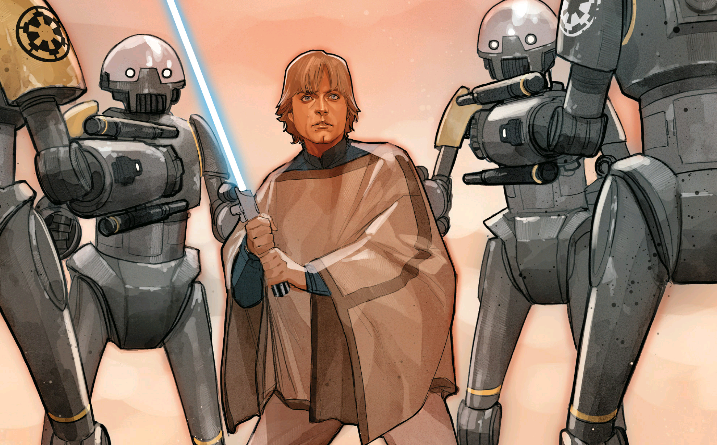 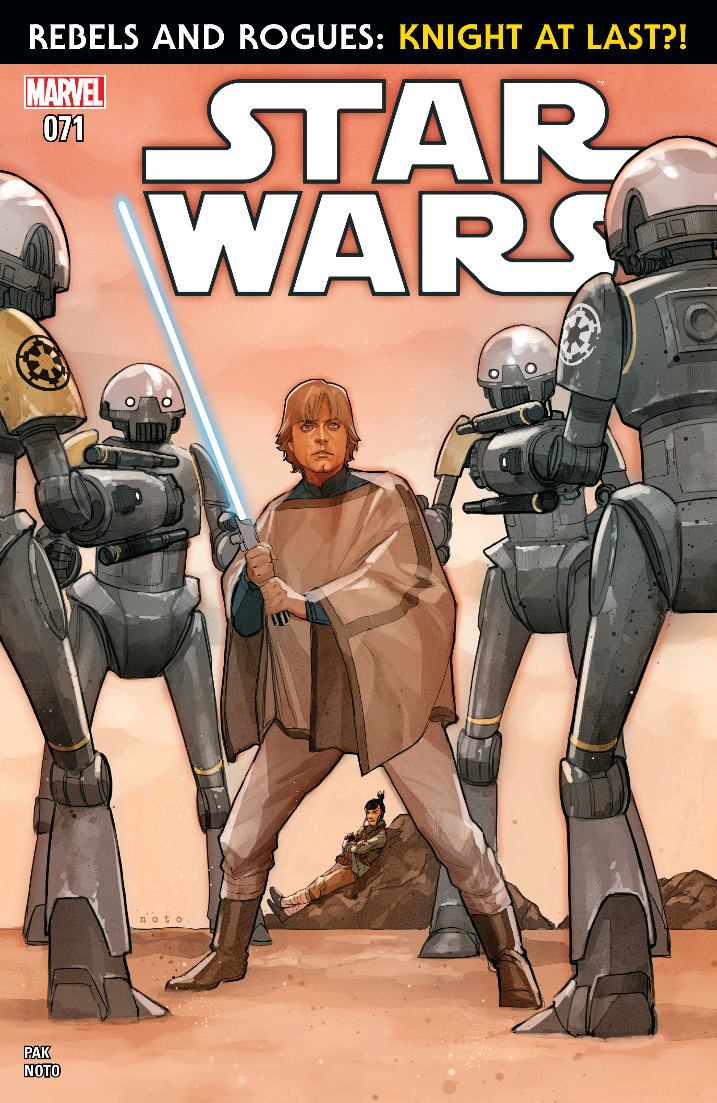 This Star Wars review follows an unbiased and detailed approach to throw light on every aspect. The journey to the epic conclusion of the ongoing Star Wars comic series continues this week with Star Wars #71: Rebels and Rogues – Part IV. As the story draws closer in the timeline to the events of The Empire Strikes Back, our heroes are on the search for a new location for the rebel base while the Empire continues to hunt them down, sending out reconnaissance probes across the galaxy. Luke Skywalker, in attempt to lure Imperial ships away from the rebels, has landed on the inner rim world of Sergia. There, he met a mysterious young woman named Warba that could possibly aid in his Jedi training.

On Lanz Carpo, Han and Leia continue their mission to incite war between the Empire and a local crime boss that had been giving the Alliance some trouble, and on the mistakenly presumed lifeless world, K43, C-3PO meets his maker once again as he and Chewbacca must determine the fate of an entire species of rock people called the Kakra. But who will gain their allegiance, the rebels or Darth Vader? Read on for the full Star Wars review. Spoilers ahead… 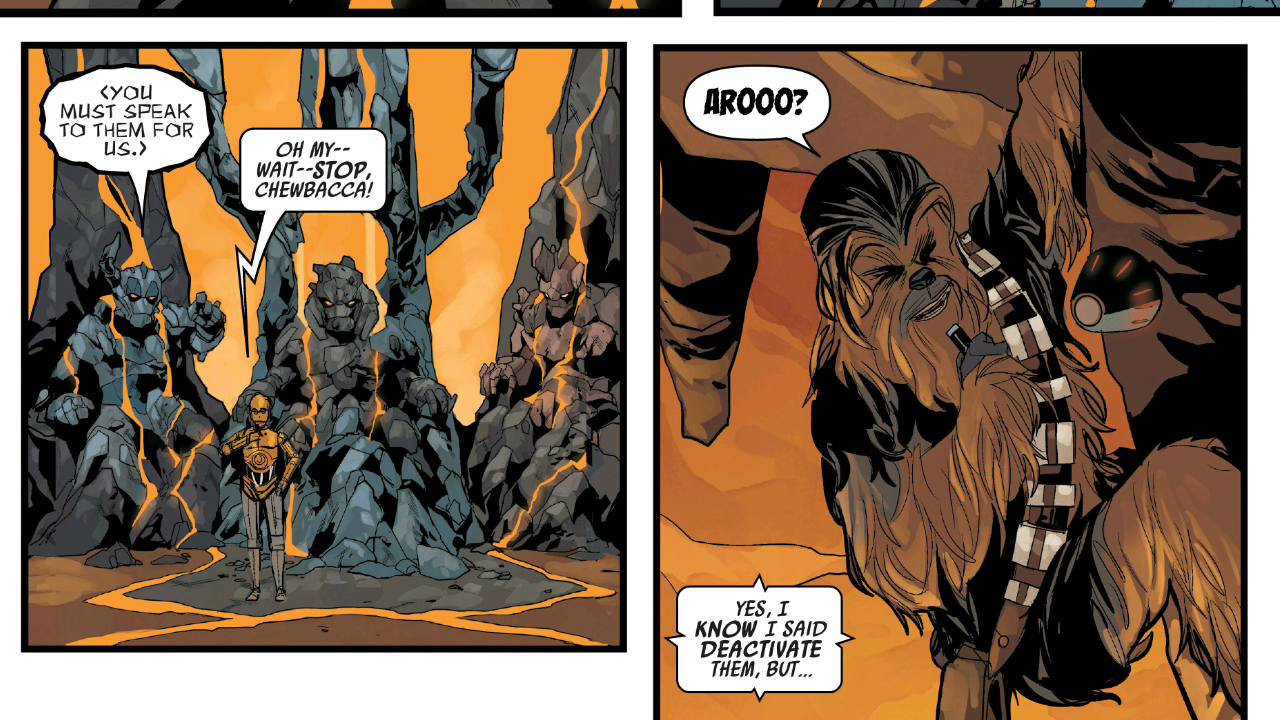 The issue begins with C-3PO trying to convince the  Kakran elders of their imminent danger, but when it becomes clear to him that the elders wish for him to help them speak to the “flesh”, C-3PO seems to realize that they could be a valuable asset to the rebellion. He tells Chewbacca to deactivate the bombs that they had set on the planet (which they previously set as a trap for the Empire), but when a figure in dark armor appears flanked on either side by ghostly stormtroopers, he quickly goes back on his plea to Chewbacca. Darth Vader was here and the explosives must be detonated, no matter the cost of sentient life. 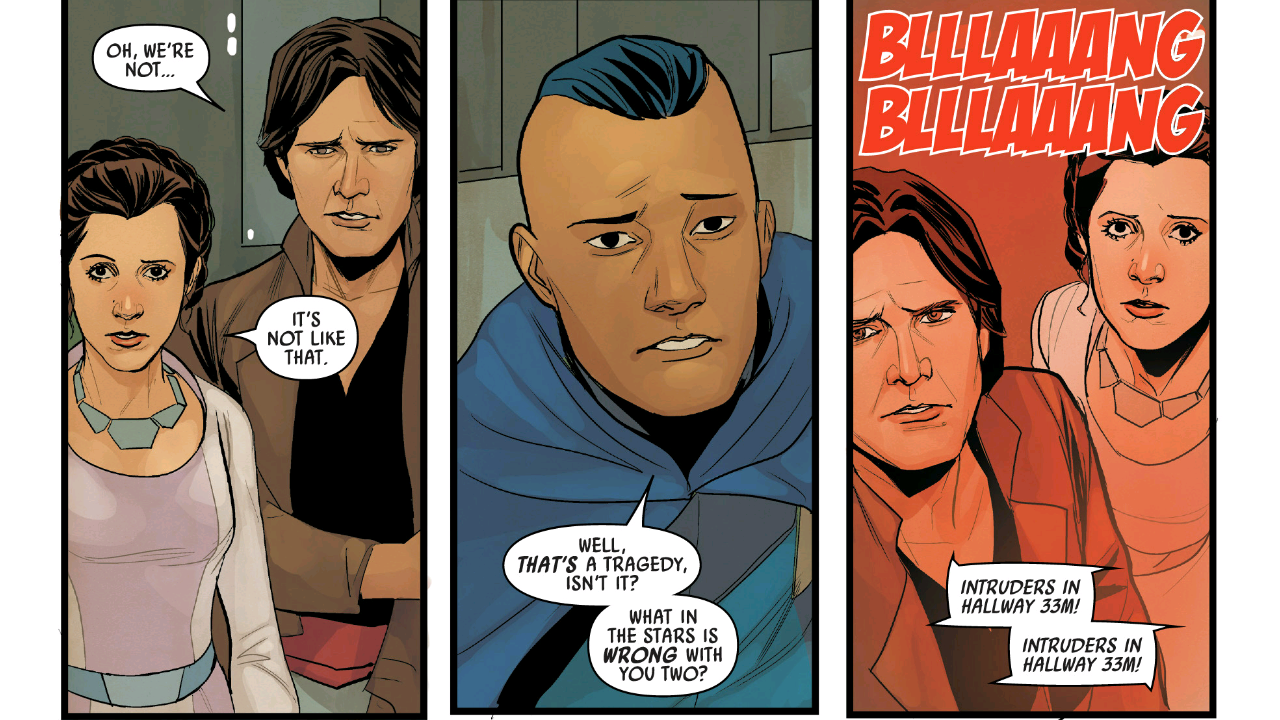 Meanwhile on Lanz Carpo, Han and Leia try to convince Dar Champion, the planet’s District Advocate and Leia’s former boyfriend, to allow them to carry out their plan to bring Boss Carpo under the crosshairs of the Empire. Champion fears for the impact that such a confrontation would have on the innocent people on his world, but he understands the plight of the rebels. After a brief tussle with Leia, he decides to help them, but offers another plan instead as a compromise. Perhaps rather then bring the Empire down on Lanz Carpo, they could convince Boss Carpo to attack the Empire instead. 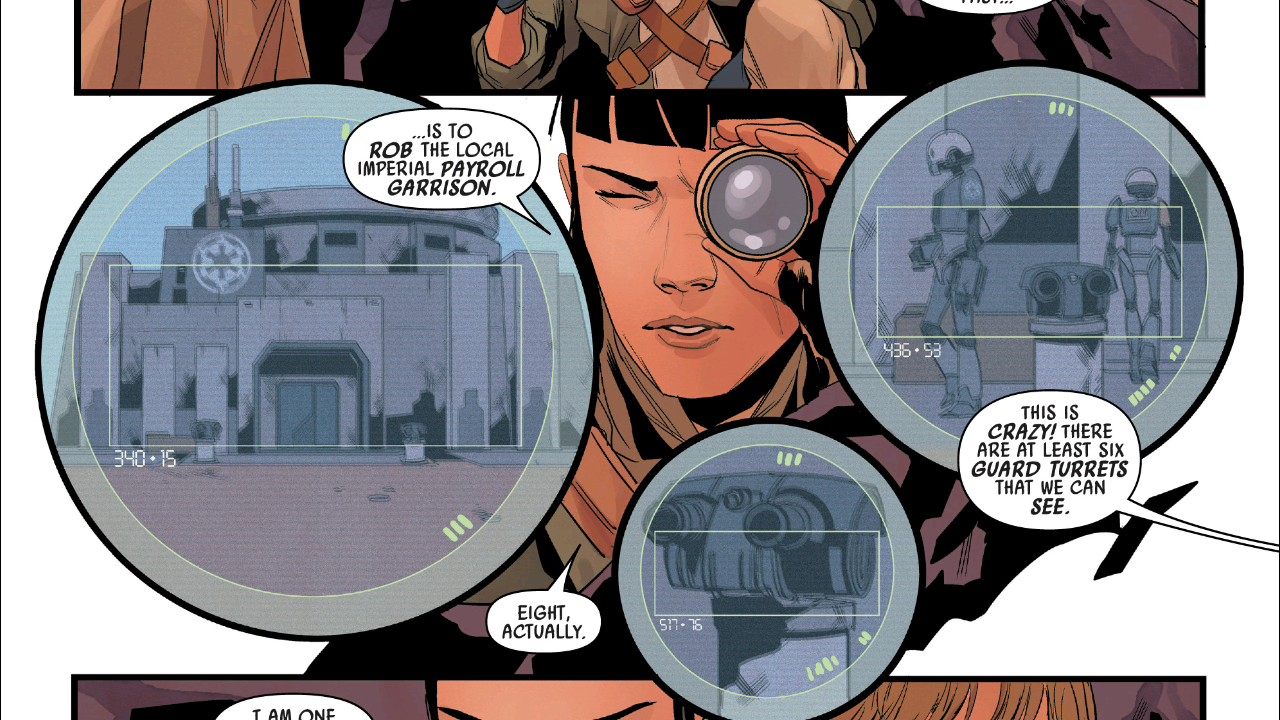 On Sergia, Luke’s new “friend”, Warba, convinces Luke to help her rob an Imperial payroll garrison in effort to secure enough funds to buy information on the locations of some Imperial scouts. Warba is obviously trying to play Luke, but she seems to know just enough about the Force that the young Jedi’s curiosity about her overrides his wariness. Warba recites the mantra of the Guardians of the Whills to Luke, and tells him of the mighty deeds that priests without any connection to the Force themselves were able to achieve through their simple faith. With Luke’s connection to the Force, she urges him to imagine what he could accomplish with just a small fraction of their faith. 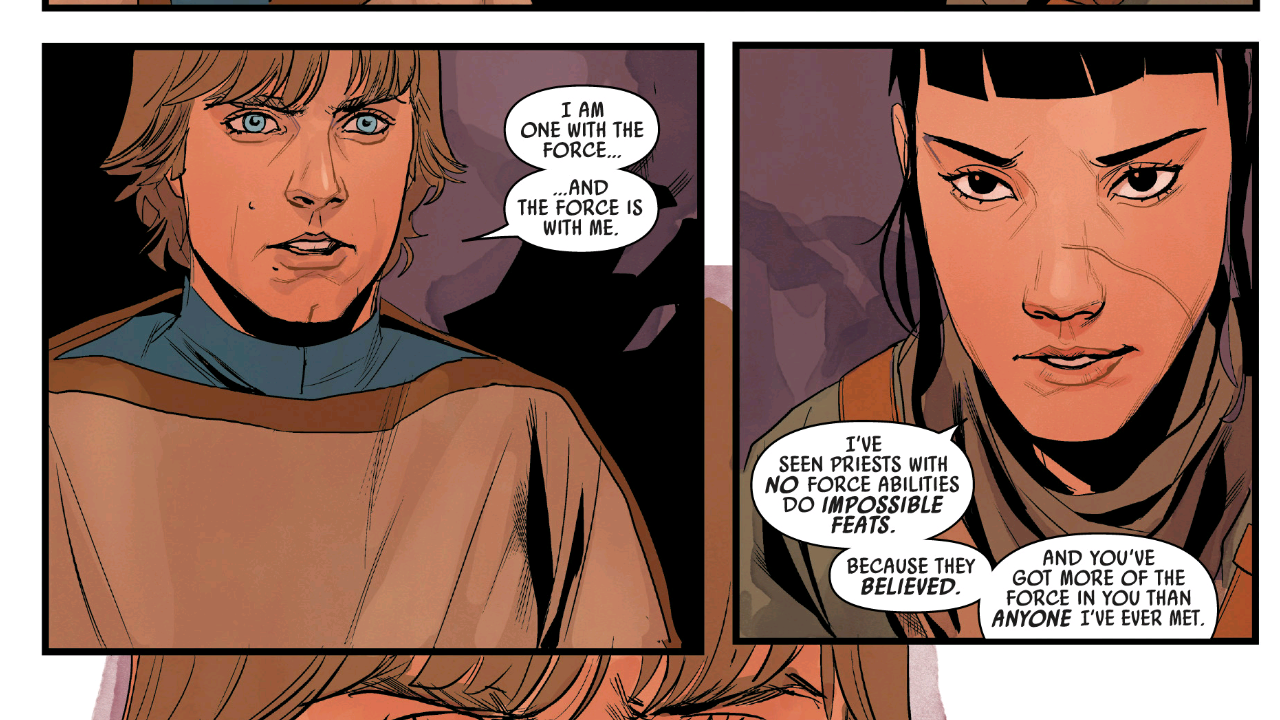 The push was enough to get Luke to do her bidding, and the young Jedi single-handedly assaulted the garrison. But just as Warba was about to steal his lightsaber and make her break, the young Jedi emerged victorious with the loot in hand. The look on her face reveals her dismay at his success. Perhaps her speech was a little bit too motivational. 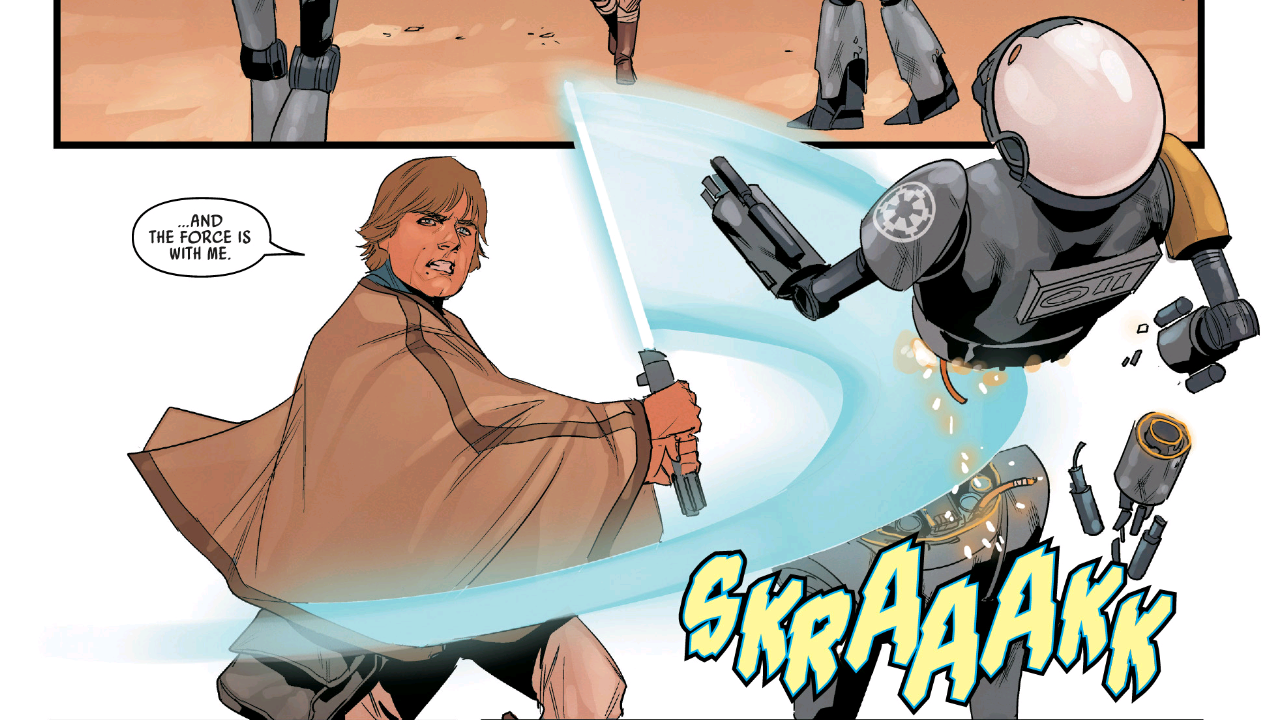 I’ve enjoyed the new direction so far with the Rebels and Rogues storyline, but we’re still a ways off from any sort of “epic conclusion” like what is being promised for the upcoming series finale (issue #75). That being said, we have a pretty solid set up going, and I’m curious to see where Greg Pak and Phil Noto take us in the end. I honestly don’t think Luke will get much from Warba, but her knowledge of the Force and its followers might be enough to get him over the hump of self-doubt that he’s been struggling with for some time. This issue showed both us as readers and Luke himself that he has the power within himself to accomplish great things if he could only learn to let go of his doubt and trust the Force – a struggle that he would continue to grapple with up to his training with master Yoda in The Empire Strikes Back. 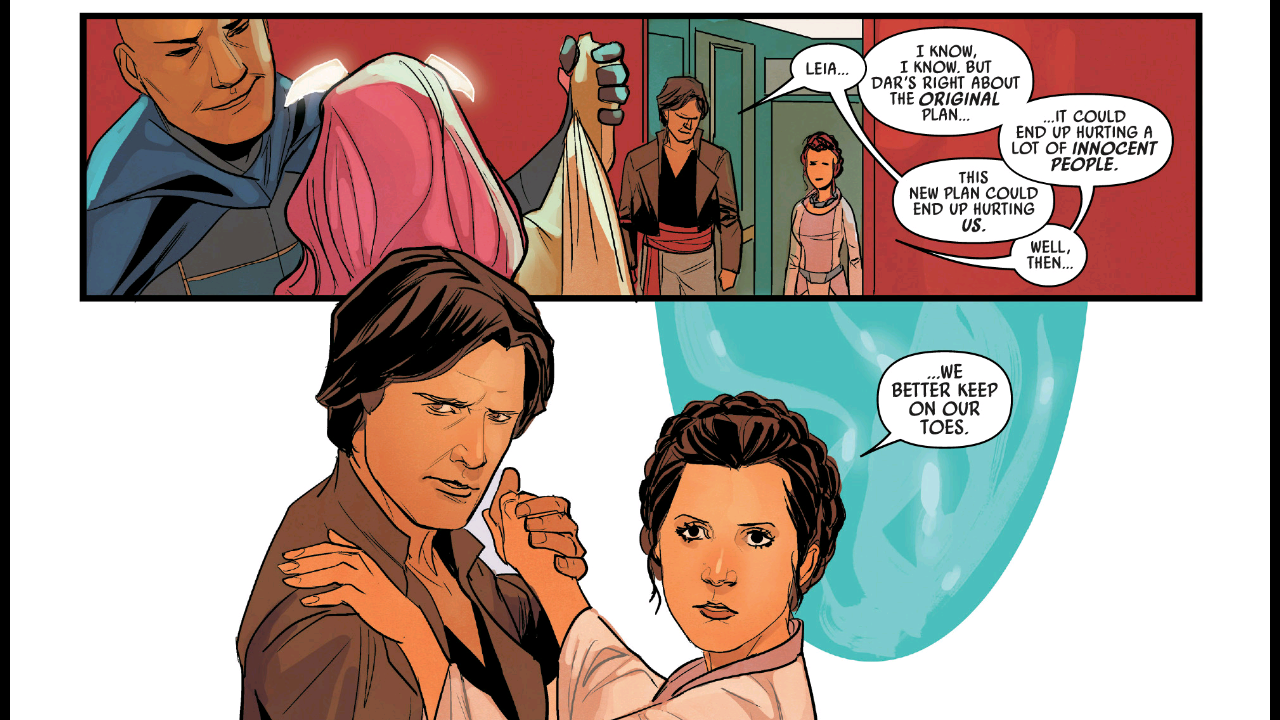 As for the Han and Leia arc, I’m not really that interested in Lanz Carpo or Dar Champion, but I like how Pak is using this mission to really showcase the romantic tension between the princess and the scoundrel. The tension has been there since A New Hope, but it makes sense that as we draw closer to Empire that the budding relationship picks up a little more steam and becomes a bit more of a narrative focus. 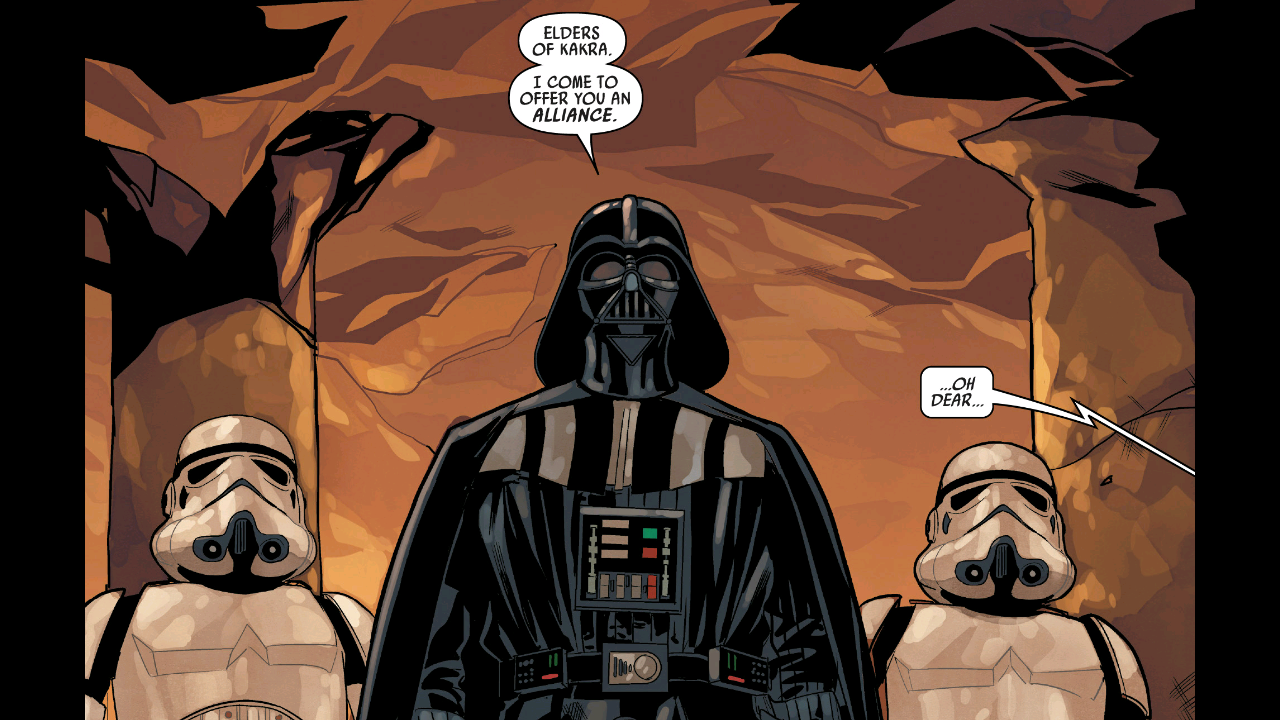 I’m also very excited to see how the conversation between C-3PO and his creator will go down in the next issue. No doubt Vader will recognize him, and I’m oddly looking forward to this encounter that I never knew I wanted. The cover art for the upcoming penultimate issue of the series also promises an epic battle that I have actually been wanting to see for some time. The cover (below) reveals Chewbacca and Darth Vader facing off in hand-to-hand combat, and I really hope this is not just a tease. Phil Noto’s covers usually are a good indication of what you’re actually getting in the issue itself though, so I think we definitely have reason to be excited. 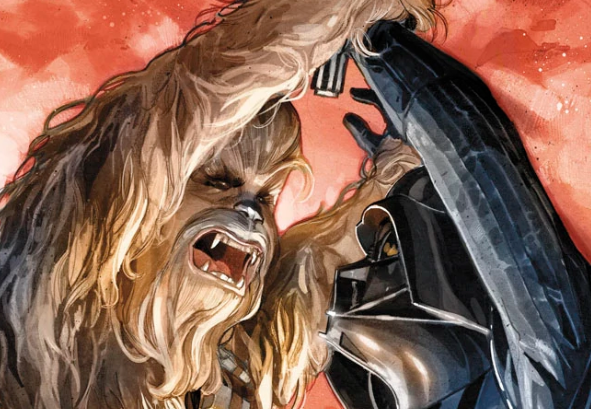 As for this issue, it’s a quick read and is well-paced, with the back and forth between the three plotlines keeping things interesting and engaging. This issue may be primarily build up for the series conclusion, but to me, there wasn’t really any fluff here. The story playing out on three fronts ensures that no panel is wasted on frivolous exposition and every page has a purpose. The art from Noto is fantastic as always, and I’m so glad that he is on board to close out the series. I think fans of the series have some great things in store leading up to the final issue and, hopefully, beyond.

Star Wars #71 is available now in a comic shop near you or online at Comixology. Happy reading Star Wars comic fans! 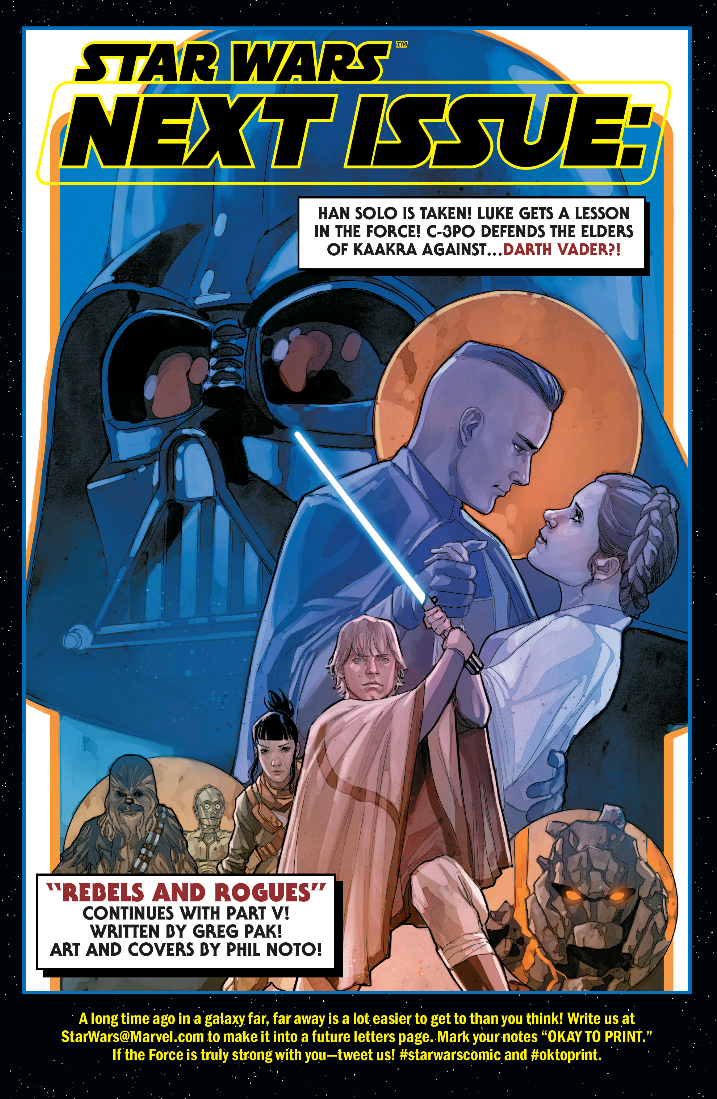 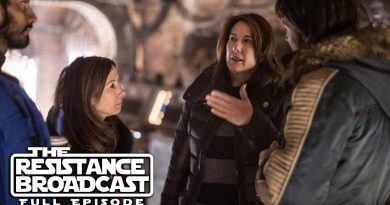 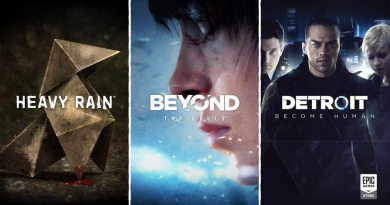 UPDATE! New ‘Star Wars’ Game Rumored To Be in Production from Quantic Dream, the Developers of ‘Detroit: Become Human’ 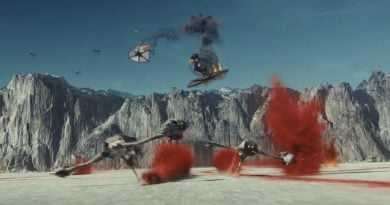