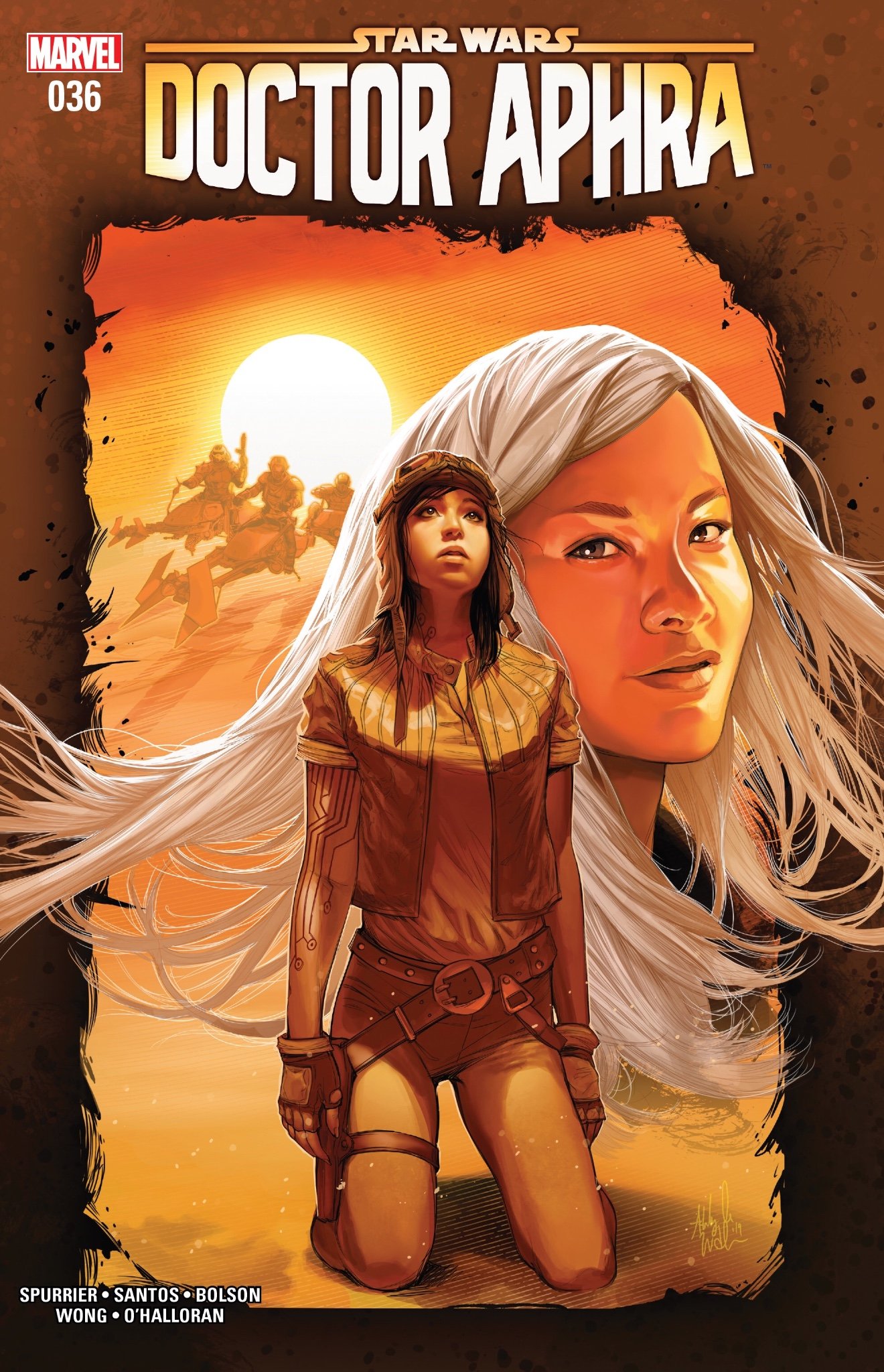 Despite the recent news, our Doctor Aphra presses on in her adventures across the galaxy – but in this issue, she’s hit a bump. The doctor and her young ward have been caught up in a plan to overthrow the Emperor, cooked up by none other than the Imperal Minister of Propaganda, Pitina Voor. Aphra isn’t one to shy away from a good scheme but most anyone in a galaxy far, far away would have some trepidation about gunning for Darth Sidious. Aphra knows just how dangerous it can be to deal with Sith Lords but unfortunately she doesn’t have much of choice because the plan is already in motion. SPOILERS AHEAD…. 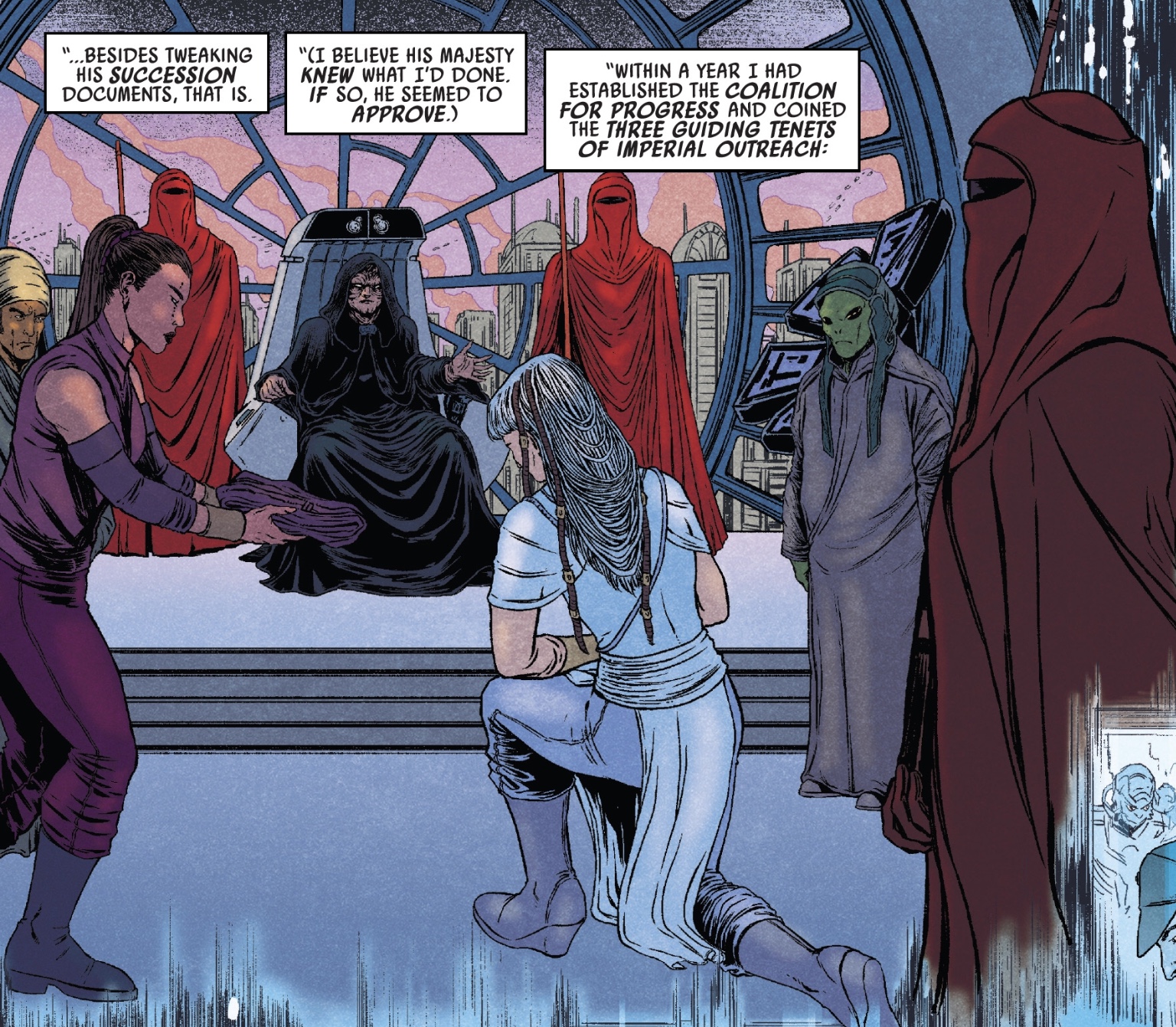 This issue opens with quite a mini-history of Voor’s rise through the ranks of the Empire. She comes from royalty and was forced to marry an Imperial senator at a very young age. After growing tired of his complacency, she coerced him into suicide by feeding him a false rumor Darth Vader was coming for him. Her late husband was so terrified he hung himself. She took his place as a senator and demonstrated her talents of manipulating planets into joining the Empire through fear and propaganda. Essentially, presenting false threats to planets and the Empire as guardians who’d protect them from the lawless elements of the galaxy. 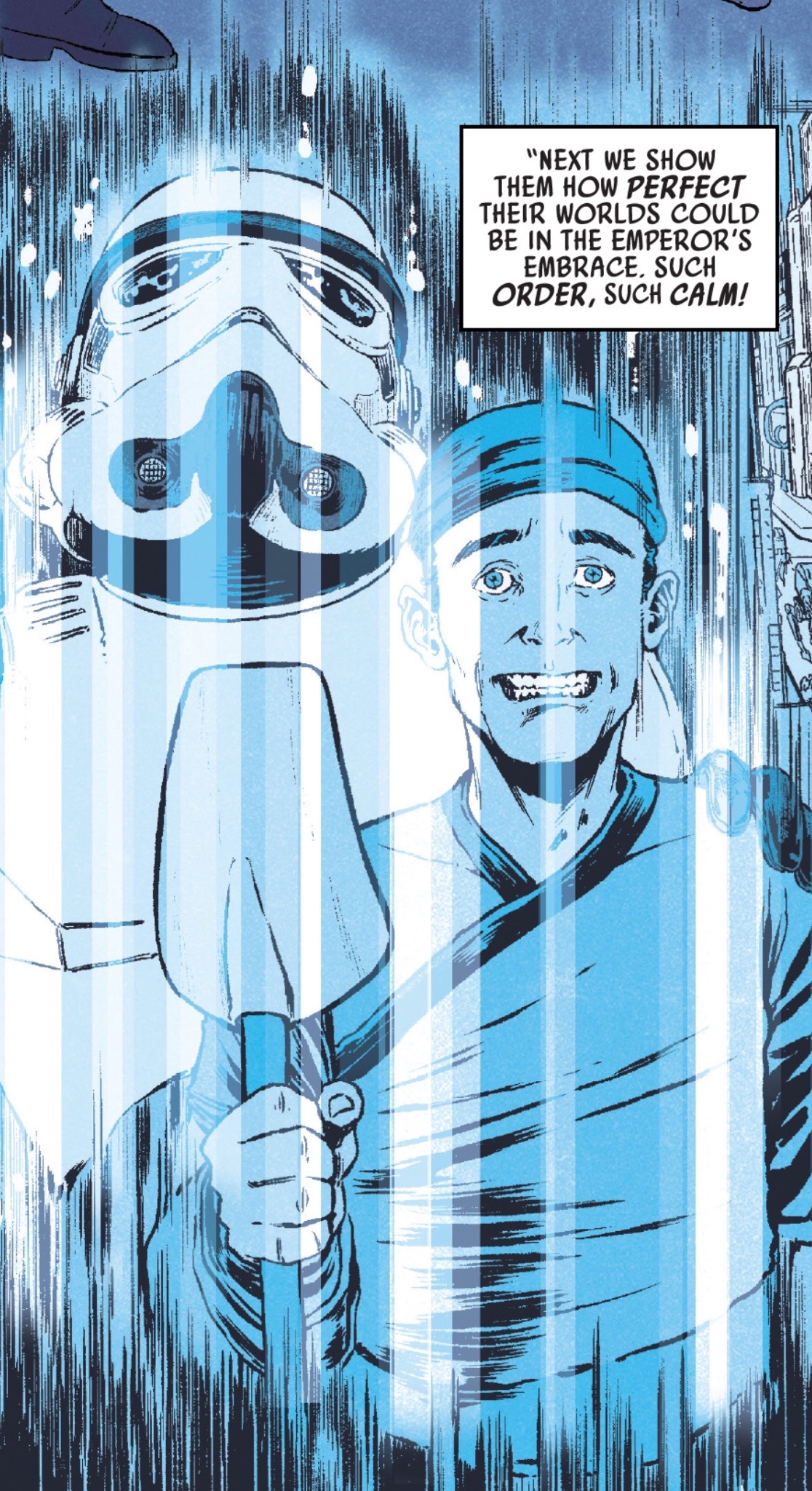 It’s the classic path-of-least resistance road to totalitarianism: Scare the populace so they relinquish freedom and embrace the oppressor until they realize it’s too late. Voor claims there is much humanitarianism in her actions and that she’s helped the Empire avoid countless conflicts and losses. The reason she wants old Sheev out of the way is due to his tendency to build super weapons and the Sith enforcer he’s unleashed upon the galaxy. Voor wants peace and doesn’t feel Palpatine will ever give that to the galaxy since he’s determined to rule by military might. She also thinks people will never not be afraid of him, which will always keep some sort of Rebellion whipped up. Voor’s intentions might seem noble on the surface, but Aphra has been around long enough to know a power void of that magnitude doesn’t sit empty for long and could be filled by someone just as bad – or worse.

And there it is! Voor claiming that her seizure of power will help restore peace. The complexity of a coup isn’t lost on the minister, but I’m surprised someone who no doubt studies the psyche of the Imperial populace would be so simplistic in her presumptions about the plan falling perfectly into place. It’s also laughable how Bond-villain she gets in explaining the whole plot to Aphra and Vulaada. I guess that’s because she’s informed them the plan is already in motion and she’s quite confident the Emperor will be dead shortly. More importantly, Voor begins to inform Aphra she’s been an unwitting participant in this plan for some time. 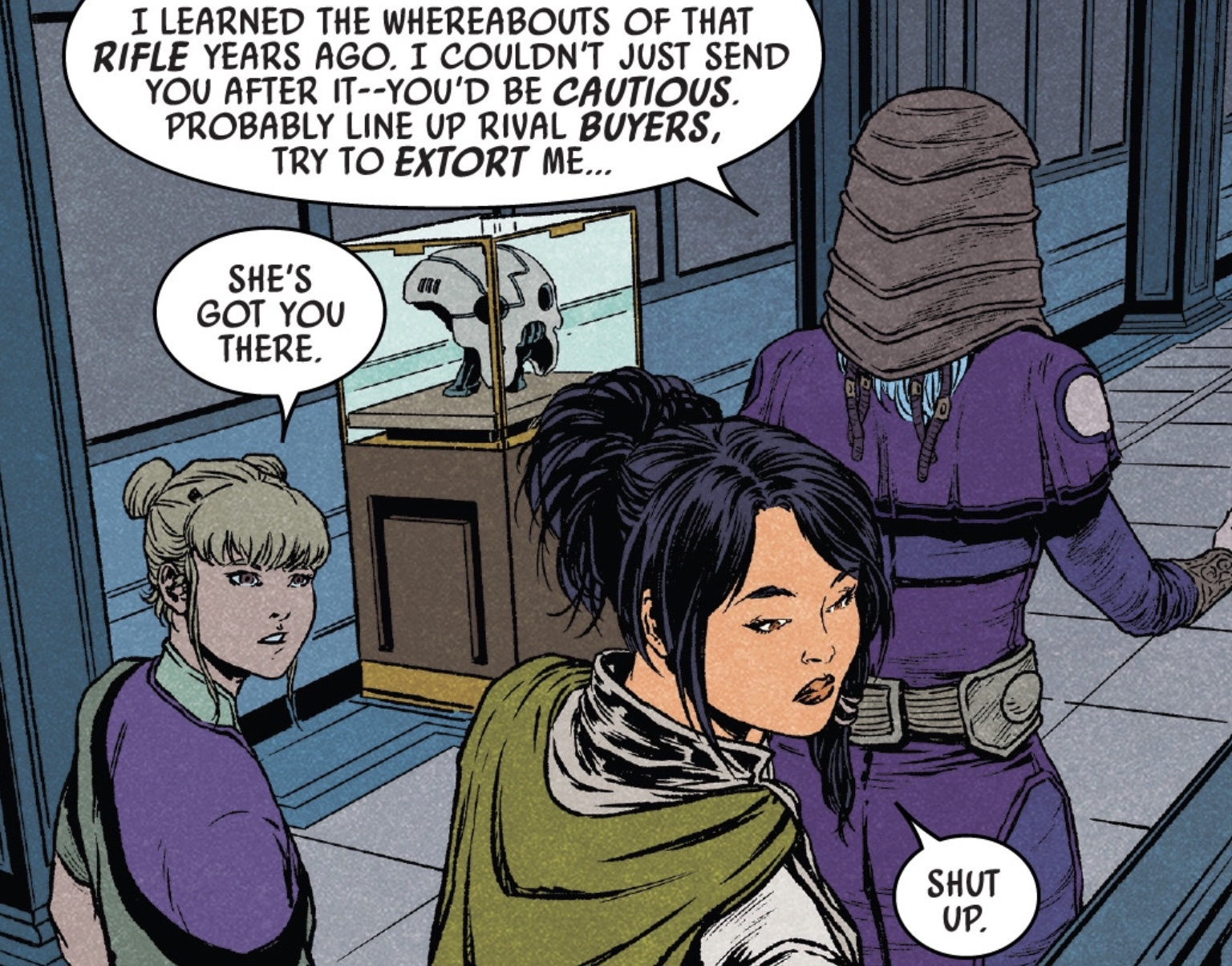 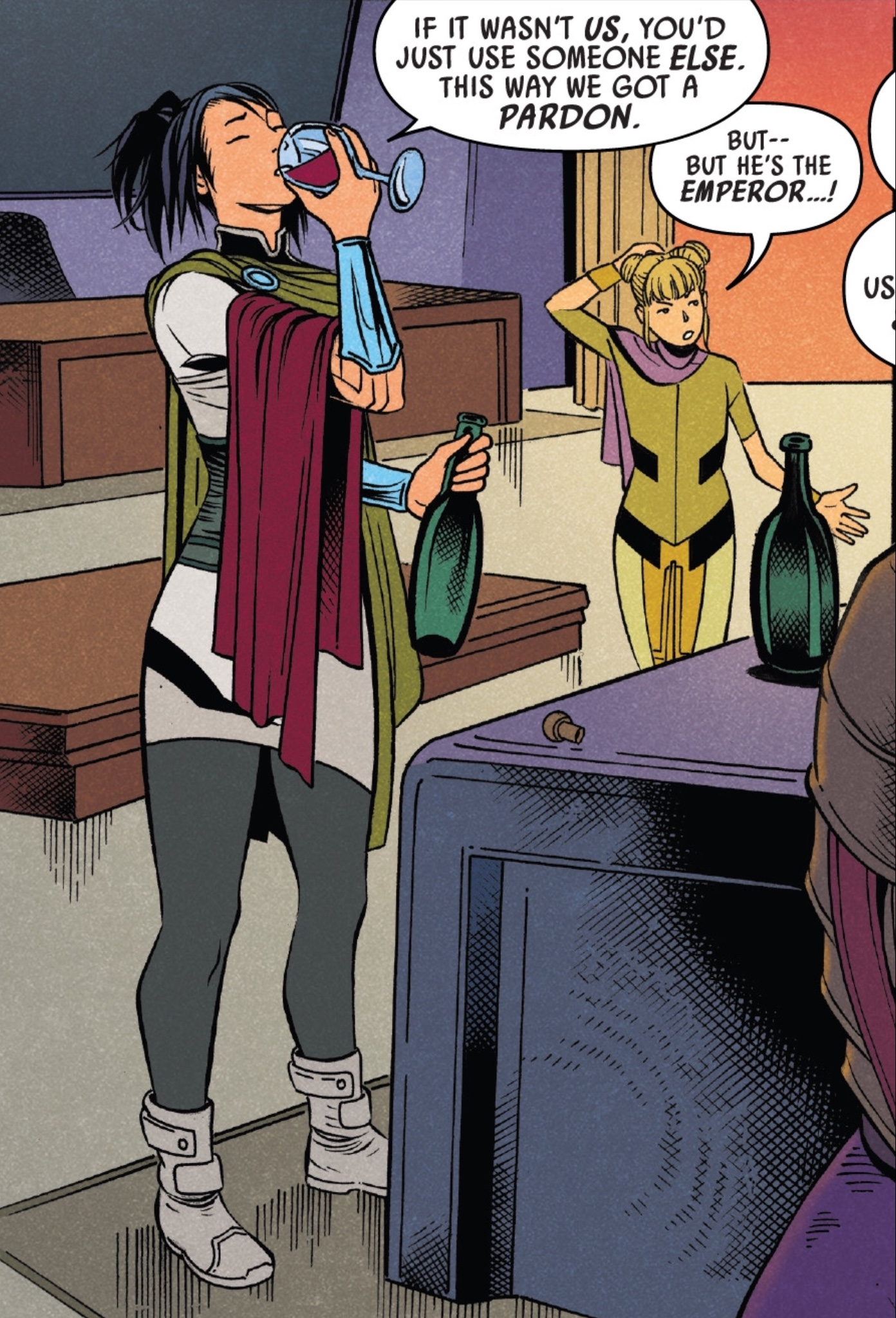 Yes, we could all probably use a drink after a revelation like that. But wait, there’s more. Aphra had a plan of her own. When Tolvan let her go, Aphra became suspicious because it seemed out-of-character. She then goes on to tell Voor that her plan wasn’t quite as smart as the minister believed and the doctor came up with a plan of her own.

Put it on camera! Aphra’s been stealthily broadcasting Voor’s great review across the entire galaxy. The Emperor and the Rebel Alliance have both seen it and now the whole plan is known. Aphra double-crossed the double-crosser! I love it! Voor made a poor assumption that Aphra’s tendency for greed was her singular driving force, but love wins the day. During the tour of the Imperial Propaganda museum (earlier in the issue), Aphra caught site of a familiar helmet – one that was worn by the bandits who killed her mother. When Voor explained the method she used to make populations compliant with the Empire – terrorize them into seeking safety under Imperial rule – Aphra realized her mother had been murdered by Imperial troops in disguise at the order of Voor. WHOA!!!

Wow, quite a moment here. Aphra’s just realized the Empire was responsible for the death of her mother. I have to say, I think we’ve hit a major moment in the ever evolving tale of Aphra’s burgeoning morality. She’s able to look Voor in the eye and tell her revenge is hers. As soon as she does, a familiar breathing apparatus echoes in the background. Despite whatever good could come for Aphra from very publicly saving the Emperor, she doesn’t believe there is anything that will spare her from Vader’s lightsaber. She takes Vulaada in her arms and they close their eyes, as Vader “deals” with Voor off frame. Just as the crimson glow of the Sith blade gets close to them…restraint. 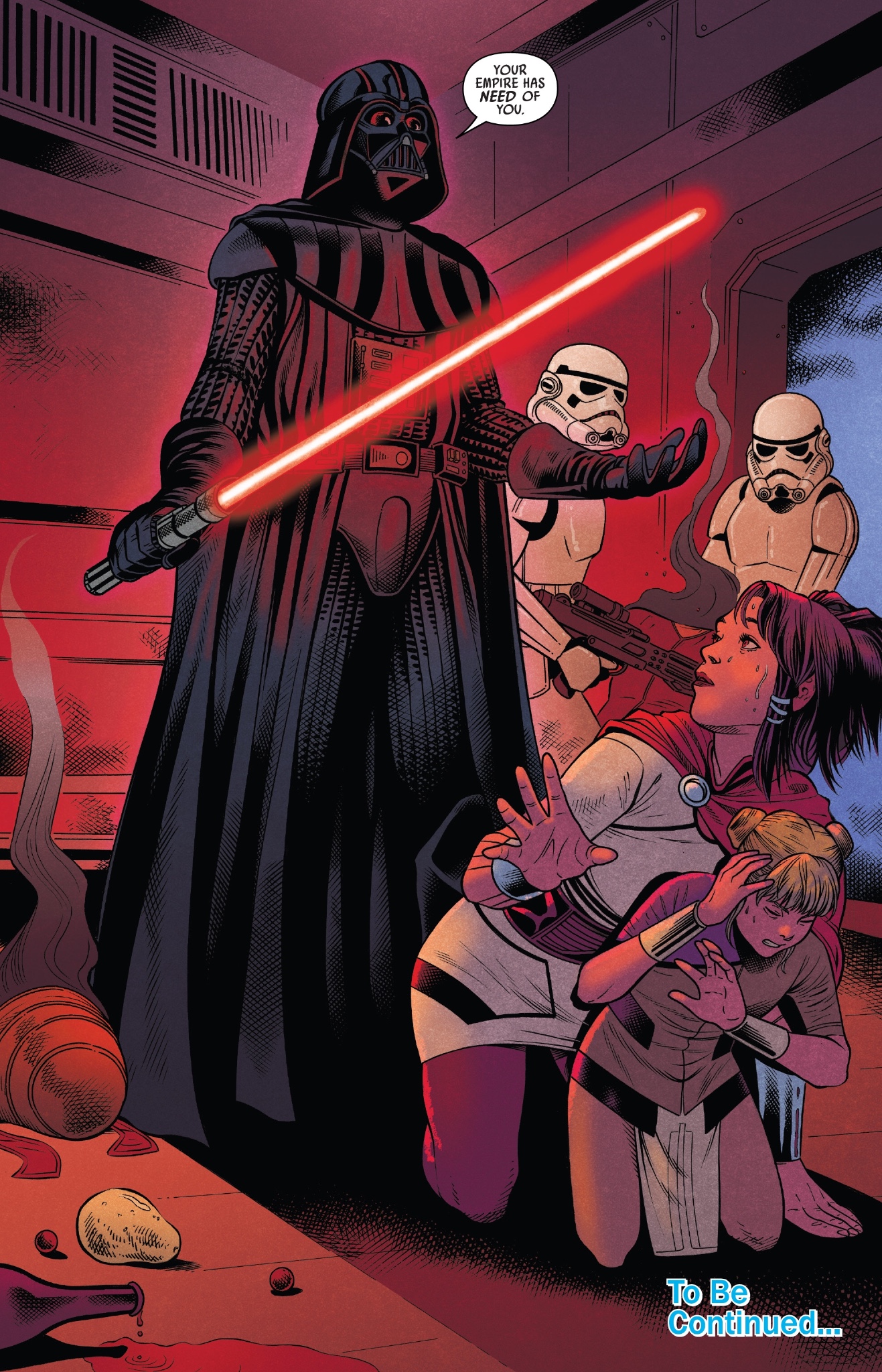 I will say this for Voor…she managed to get the band back together. This concludes the ‘Secret Rebel Superweapon’ arc and the next issue begins ‘A Rougue’s End’. Seems fitting that Aphra’s story began with Vader and this chapter in her life will end with him. I was disappointed to hear this series will end in November. But remember, no one’s ever really gone, and I think the future is still very bright for Aphra and have to say I’m convinced as this chapter closes the possibilities for many more remain open and likely.

What a great issue! Writer Simon Spurrier delivered a winding, cerebral tale about political ambitions and finally pulled the trigger on a big reveal Aphra has a reason to turn against the Empire. Now, Palpatine and Vader know about her mother as well, so I’d expect whatever they have planned for her will be closely under their watch. The art by Wilton Santos and Cris Bolson, inker Walden Wong, and colorist Chris O’Halloran is excellent, as always. The art has actually been some of my favorite over this arc. I’m so excited with how this issue set-up the conclusion of this series. As bittersweet as it is to think about the series ending, I think we Aphra fans are in for quite a ride. 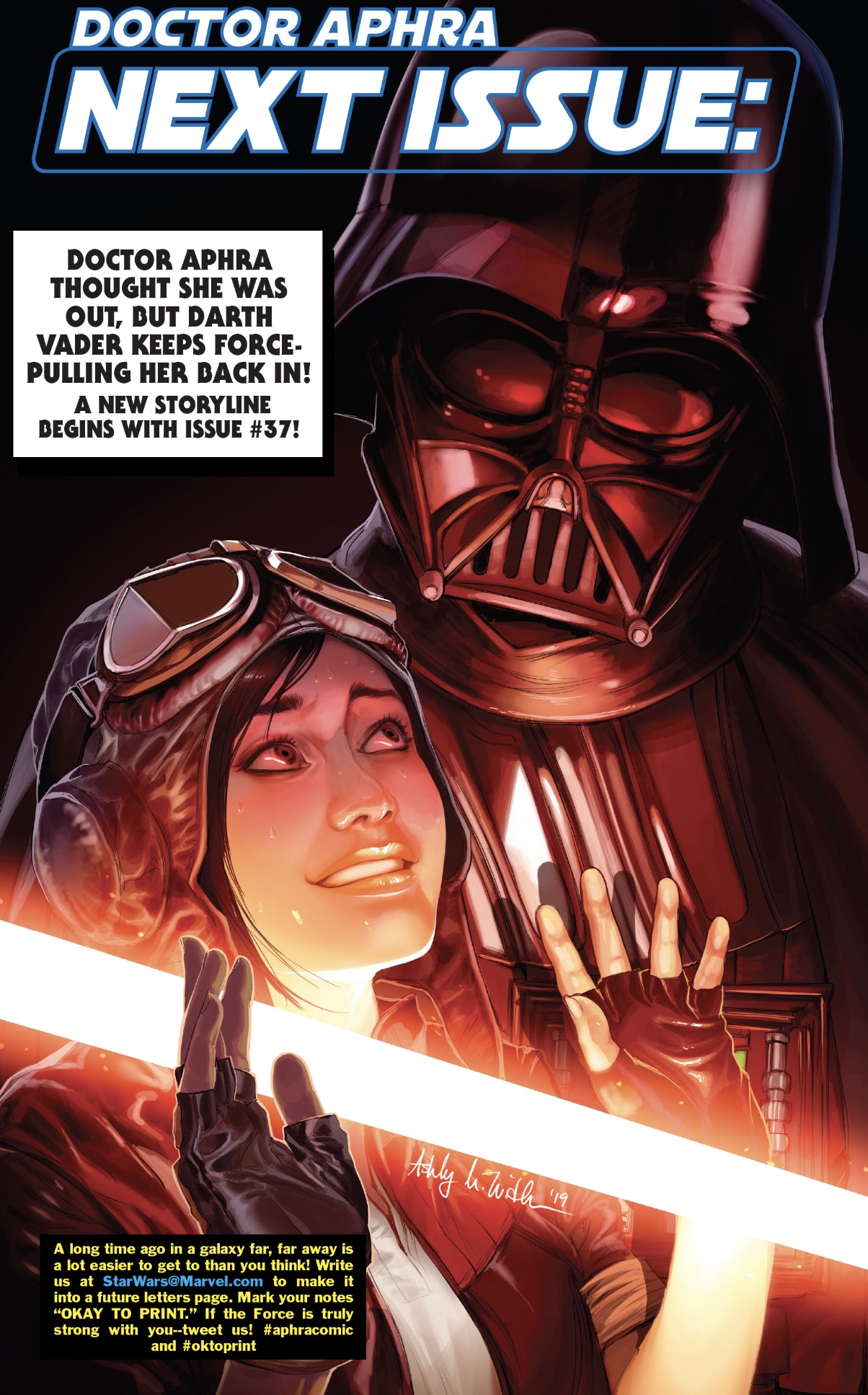