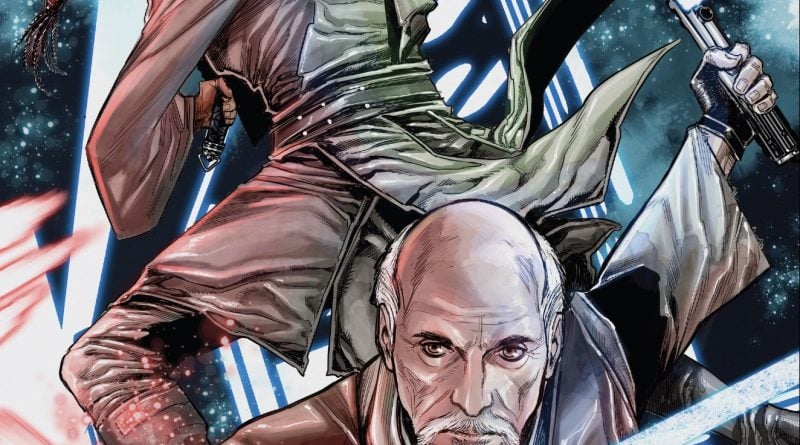 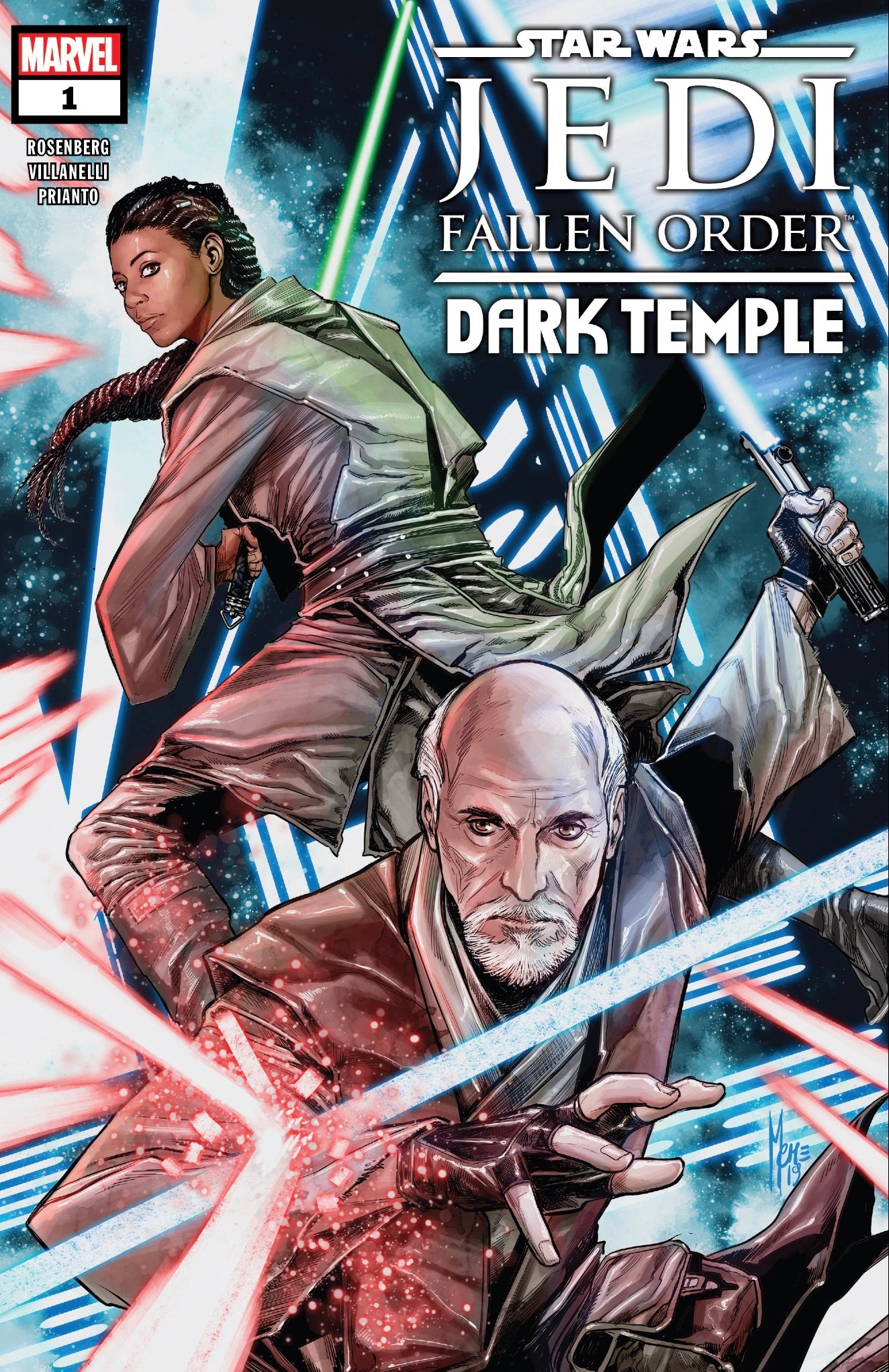 Marvel kicks off a brand new series this week with Jedi: Fallen Order which will tie-in to the forthcoming game from EA. While it’s not yet clear what context this series will provide to the game’s story, this first issue sets up a promising story involving a Jedi apprentice named Cere Junda (who shows up in the game as a mentor to protagonist Cal) and her master, Eno Cordova. SPOILERS AHEAD…. 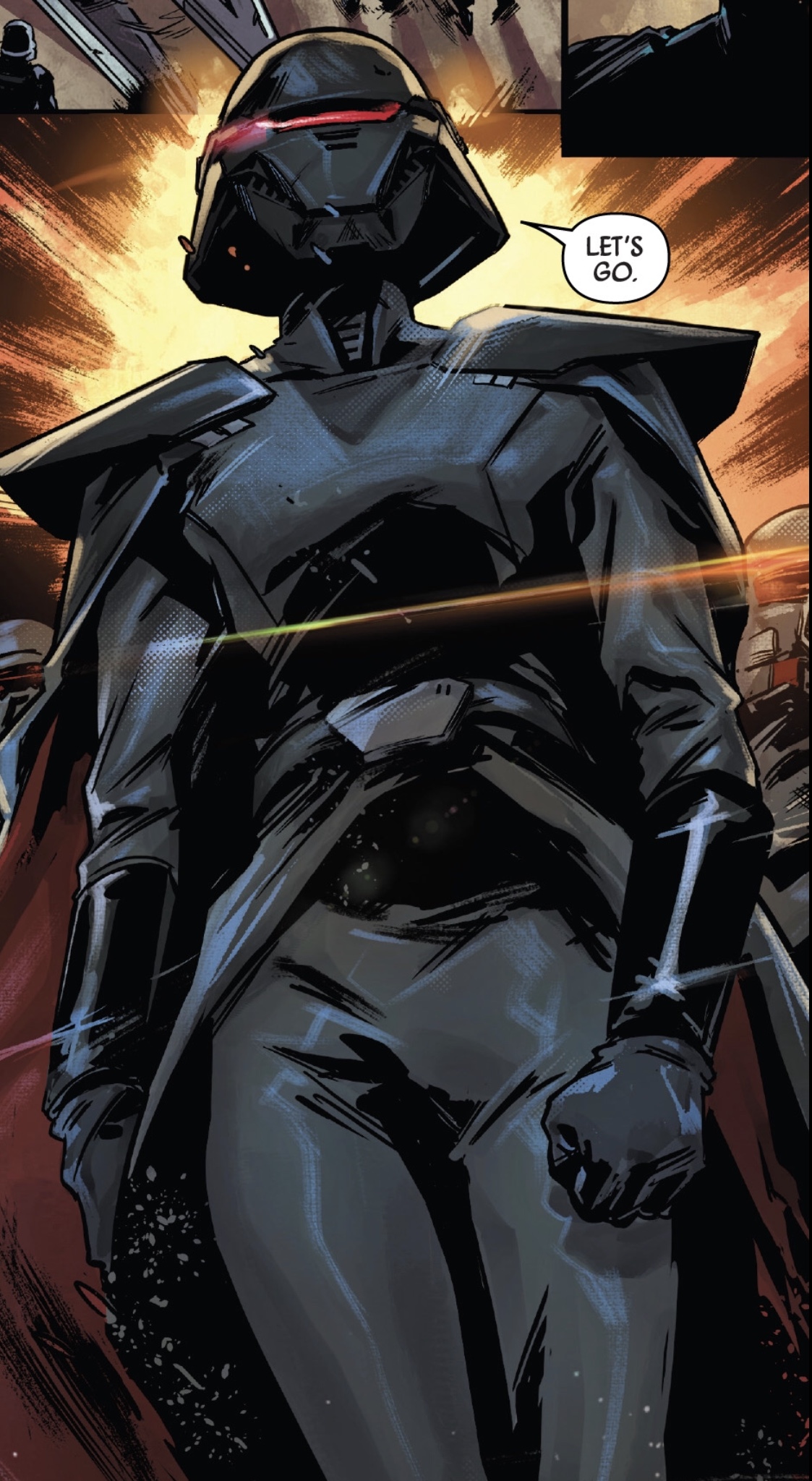 We know Second Sister will play a large roll in the forthcoming game. She’s introduced here arriving on the seemingly war-torn planet Ontotho. The local Imperial commanders don’t know who she is but learn quickly she’ll be running the show. The Empire has all but pacified the planet but a small resistance has been able to hold out. We learn Second Sister has come to Ontotho because there have been reports of a lightsaber wielding fighter in the opposition. She orders all the troopers to back off and takes over the offensive with her lightsaber and accompanying personal guard. The shooting stops and Second Sister senses the lightsaber wielding opposer is about to reveal themselves. It’s quite an opening, to say the least.

Just as Second Sister prepares to engage her target, we flashback to a planet called Nameel. There’s no specification for what period of time we’re in, but I’m guessing it’s sometime between The Phantom Menace and Attack of the Clones. We’re introduced to Jedi hopeful Cere Junda in the midst of trying to settle a dispute between Dupei Monks and some angry Trandoshans. The situation escalates to the point Cere has to use the Force to push both sides back, causing her master Eno Cordova to intervene. Cordova suggests he spend some time speaking with the monks while she remain with the trandoshans, trying to separate the two sides to cool down hostilities. Junda is a bit wounded by her master taking control, but heeds his advice. Once he’s gone, she scolds the presumingly more aggressive Trandoshans for an unwarranted attack on the monks. They don’t like that. 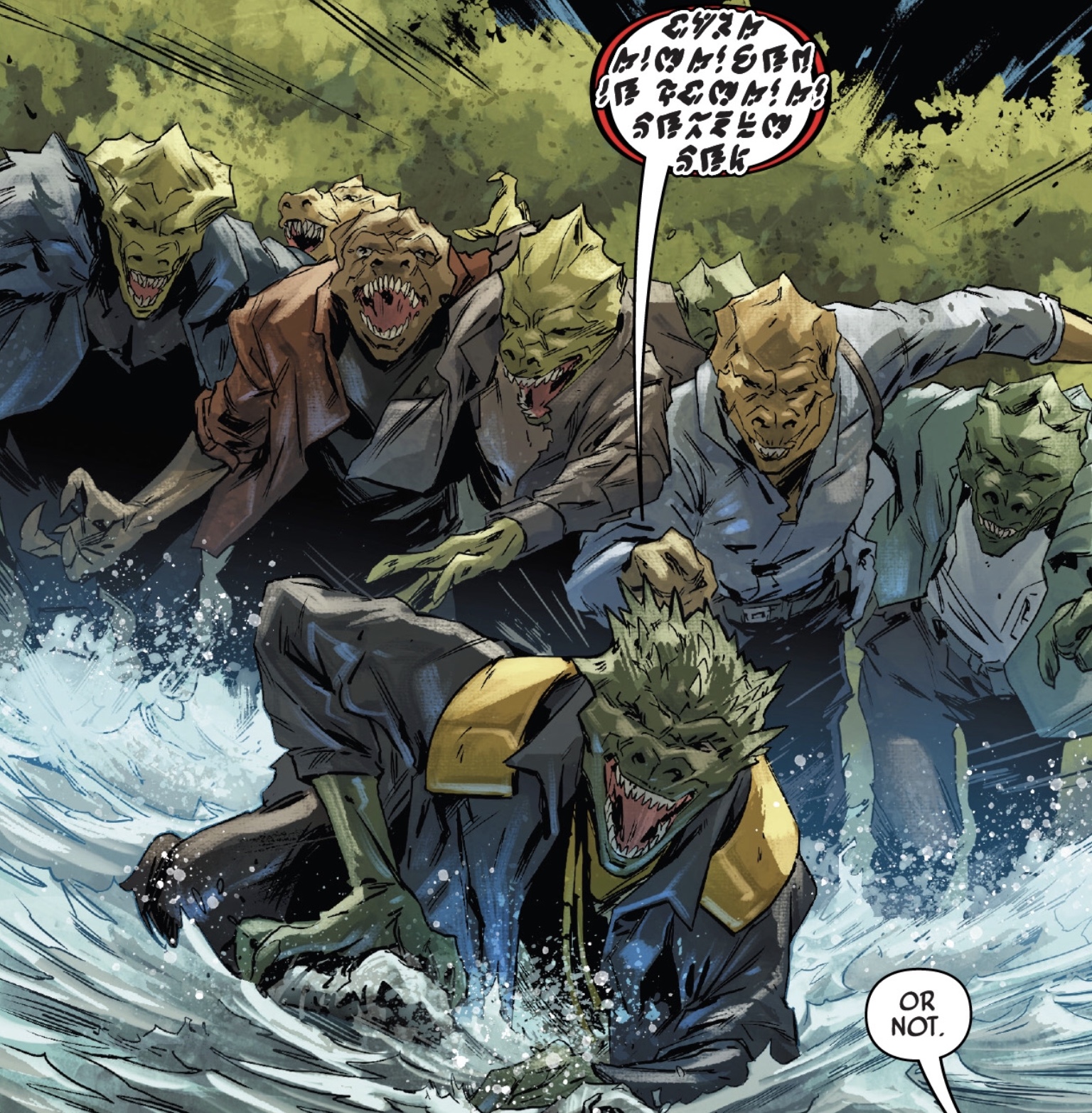 The scene erupts into fighting between the Trandoshans and eventually spills over, turning their collective anger at Cere Junda. She tries to take a few of them down peacefully, but when one is dealing with Trandoshan warlords one should expect blasters to appear. And they do.

Since we are still firmly in the more civilized age, Cere pacifies the situation with her lightsaber. No one dies, but Cere certainly mops the floor with the warlord’s crew. It’s not even close to being a contest, but just as she finishes, Master Cordova returns with a very surprising update on his discussion with the Dupei Monks.

Well, don’t judge a Trandoshan by their appearance. Looks like the Dupei Monks were the guilty party. Cere is crestfallen for allowing the situation to escalate when her master could’ve resolved it without any violence. She apologizes to the warlord and they make their way back to Coruscant. If only Cere knew how many other Padawans we’ve seen hastily whip out their lightsabers, perhaps she wouldn’t be so hard on herself. I do think it’s admirable how quickly Cere admitted her misjudgment and apologized to those she’d harmed. Padawan humility is not something we’ve seen a lot of in Star Wars, so it’s nice to see Cere is very self-aware.

Back on Coruscant, Cordova and Cere are brought before the Jedi Council to debrief them. Cere doesn’t dispute her mistakes and takes full responsibility, all while being terrified her unjustified acts of violence against the Trandoshans will get her expelled from the Jedi Order. Yoda definitely hands down a lecture, but ultimately the Council decides this mistake is a teachable moment for Cere. No doubt her admission and accountability helped them see she’d learned her lesson. Instead of a disciplinary hearing, Mace Windu is more interested in dispatching Cordova and Cere on their next mission. The planet Onotho has just joined the Republic and they’ve discovered a mysterious temple they’d like the Jedi to investigate. Windu notes Cordova has an interest in anthropology, so he assigns them the mission to investigate. As they exit the chambers, Cere quietly expresses her disdain for these type of research missions, so she does share the impulse for excitement we’re used to seeing in most Padawans.

The Ontotho of this era looks much quieter than the one we met in the opening pages. They meet their guide – a human named Dylanto Daa, who brings them up to speed. Notice the magenta speckles in the frame above. It’s frozen particles of gas, creating a snow like substance that’s constantly falling from the sky. I thought this was a pretty cool element to the planet, though Cere learns these snowflakes are not for consumption, as the gas is toxic in concentrated amounts. Dylanto informs the Jedi that Ontotho is not exactly a planet unified under one government and the last culture holding out to join the Republic is the Fylari – which incidentally happen to control the region where the mysterious temple is located. Dylanto and the Jedi set out in a heavily armored vehicle to the region. Cordova is nervous Dylan might be using the Jedi as a show of force to get the Fylari to submit to them. 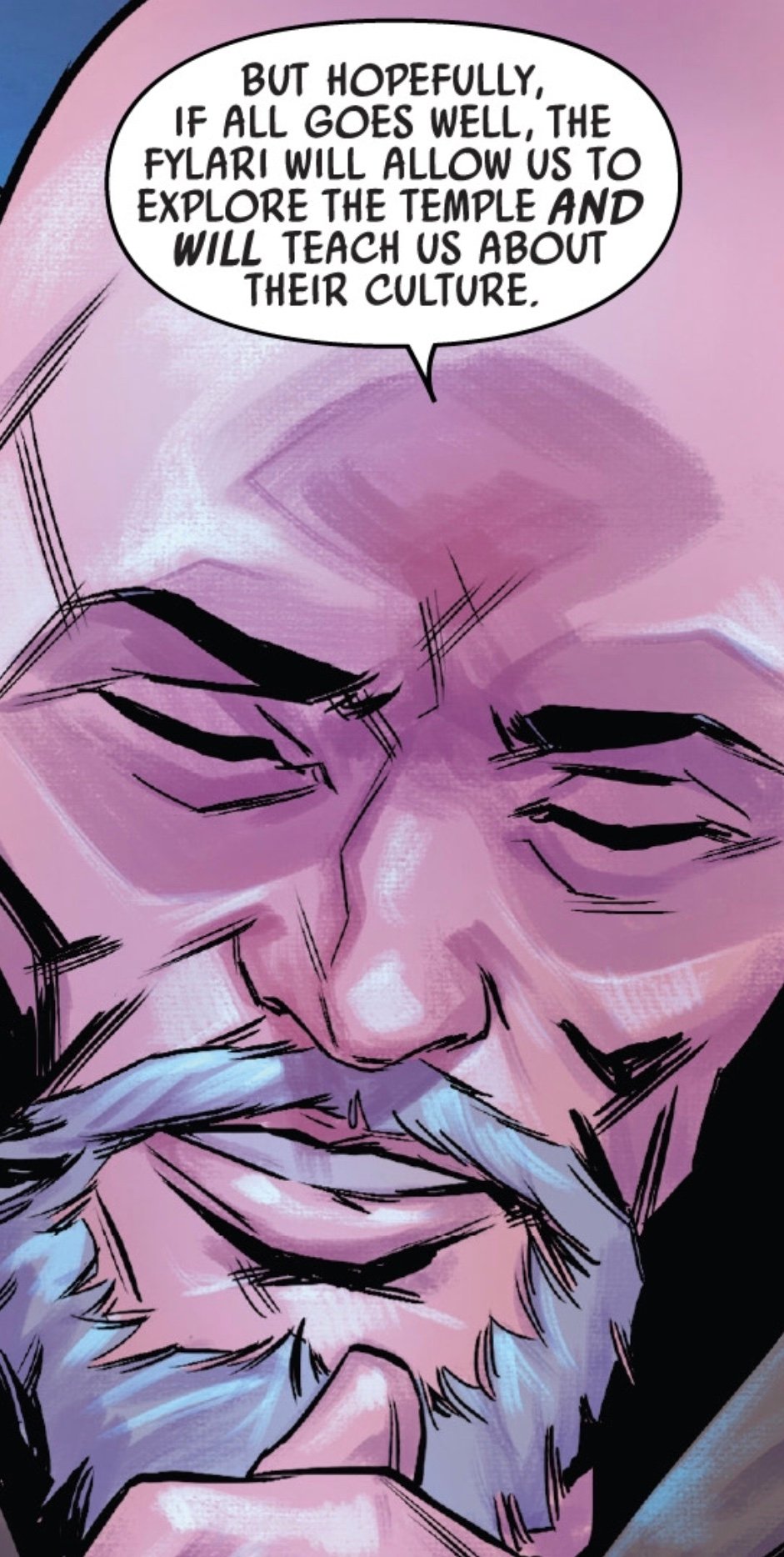 Cordova remains optimistic the Jedi can accomplish their task while dually serving as outreach to the resistant Fylari. That optimism is suddenly questioned when a proximity alert goes off and they are informed of an ambush underway. Despite warnings, Cere quickly hops out of the vehicle and investigates the proximity. Cordova follows her and orders the driver and Dylanto to stay behind. Cere has her lightsaber out and ready to defend. This region of the planet clouds their ability to use the Force – specifically sensing where other beings might be. Cordova notes that the region is actually a dried up sea bed. Cere rushes ahead of him, using the scant moisture released from contact to track down where their potential attackers could be. She moves so quickly that Cordova fails to keep up and then she comes upon an unconscious being.

As Cere examines the being, she hears hushed voices concerned with her presence. She leaves to search for whoever else is out there, but ends up right back where she started. Cordova fears they’ve entered an environment they don’t fully understand and tells her it’s time for them to be going. Cere insists she should still search for the people hiding in the forest, but before the debate continues the ambush is sprung. 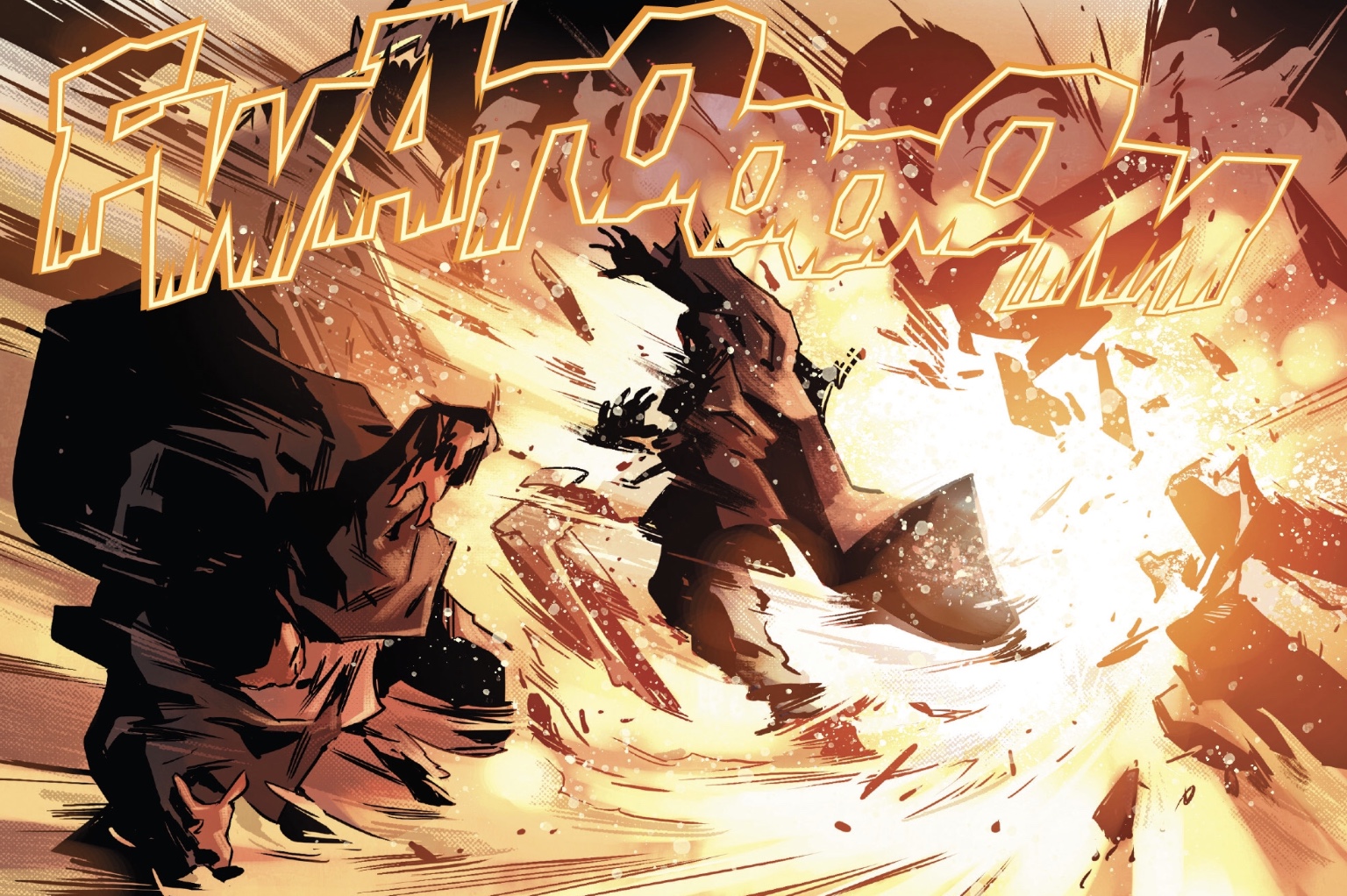 The Jedi are knocked to the ground and when Cere comes to she can’t find Cordova and the vehicle they traveled in. After a few seconds of searching, whoever was behind the ambush strikes at Cere.

Cere is knocked unconscious and just before she fades she hears: “I hope you’re right about her.”

I thought this was a great start to a new series. I’m intrigued to find out more about Cere and Cordova, both of whom made their debuts in the canon here. Writer Matthew Rosenberg did a great job of establishing their dynamic without going to heavy into exposition and risking a bog down in the story. The ancient temple, which Rosenberg went out of his way to say is NOT a Jedi one, also suggests we’ll be introduced to another ancient culture. It’s been so cool to have canonical stories referencing cultures who came before the ones we know in Star Wars and makes me think there are some big plans on the horizon to eventually tell their stories. The art in this issue is fantastic and I’m very pleased artist Paolo Villanelli and colorist Arif Prianto will be onboard for the series. This issue gives me high hopes for the series and the EA game set to release in November. 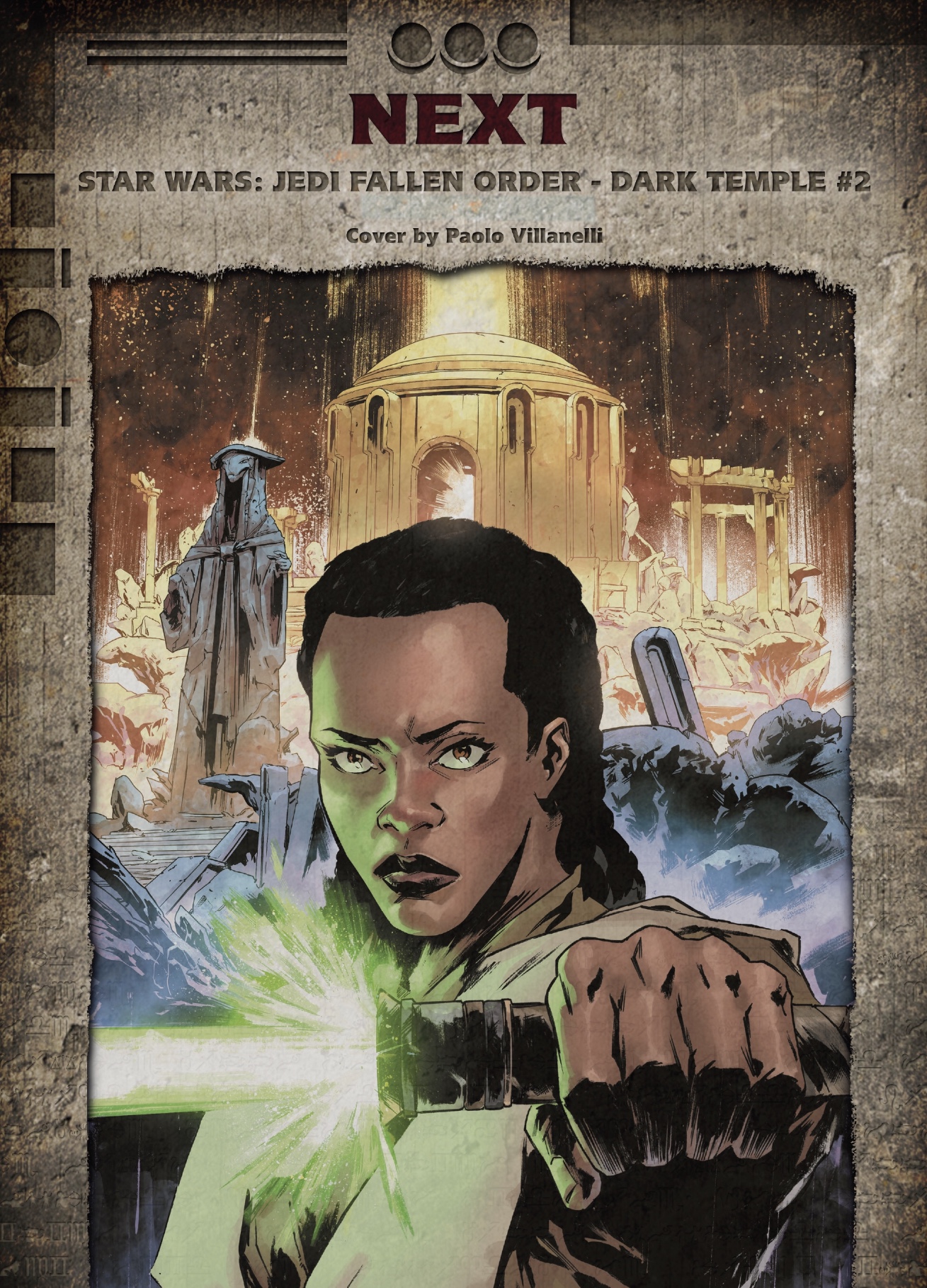 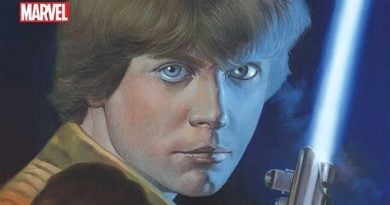 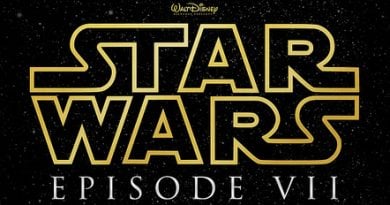 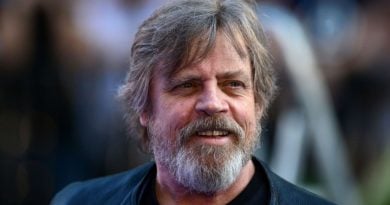