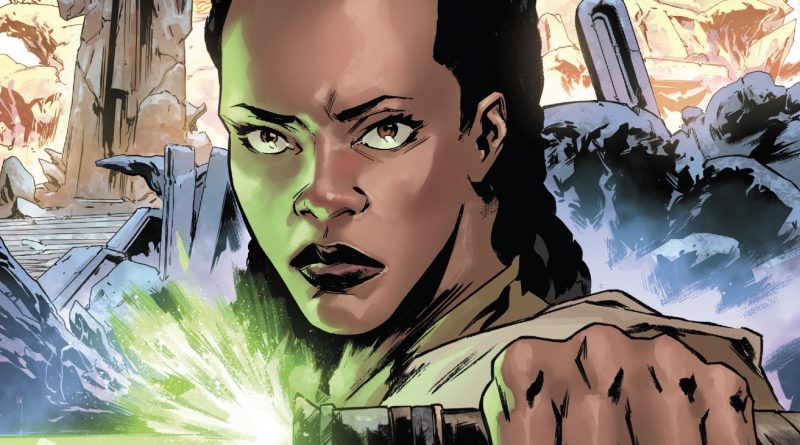 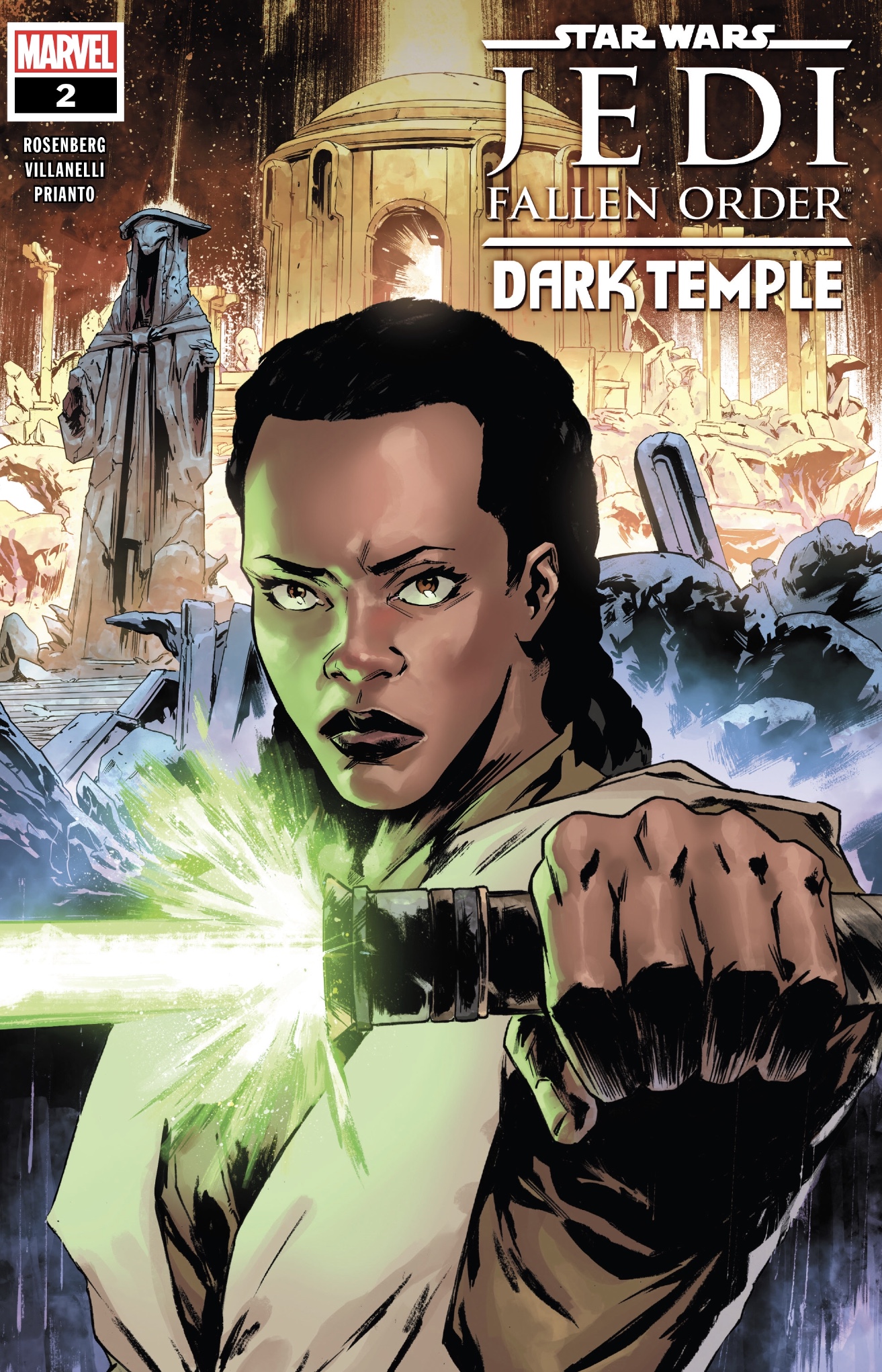 The action returns to Ontotho this week in Jedi: Fallen Order – Dark Temple. This series so far is very fitting as a companion to the forthcoming game. There has been a ton of action and no shortage of lightsabers. The previous issue concluded with padawan Cere Junda surviving an ambush as she and her master, Eno Cordova, set out to contact a hostile race standing guard over an ancient temple they hope to get a look at. Things aren’t always what they seem and sometimes it’s hard to know who to trust in a galaxy far, far away. SPOILERS AHEAD…. 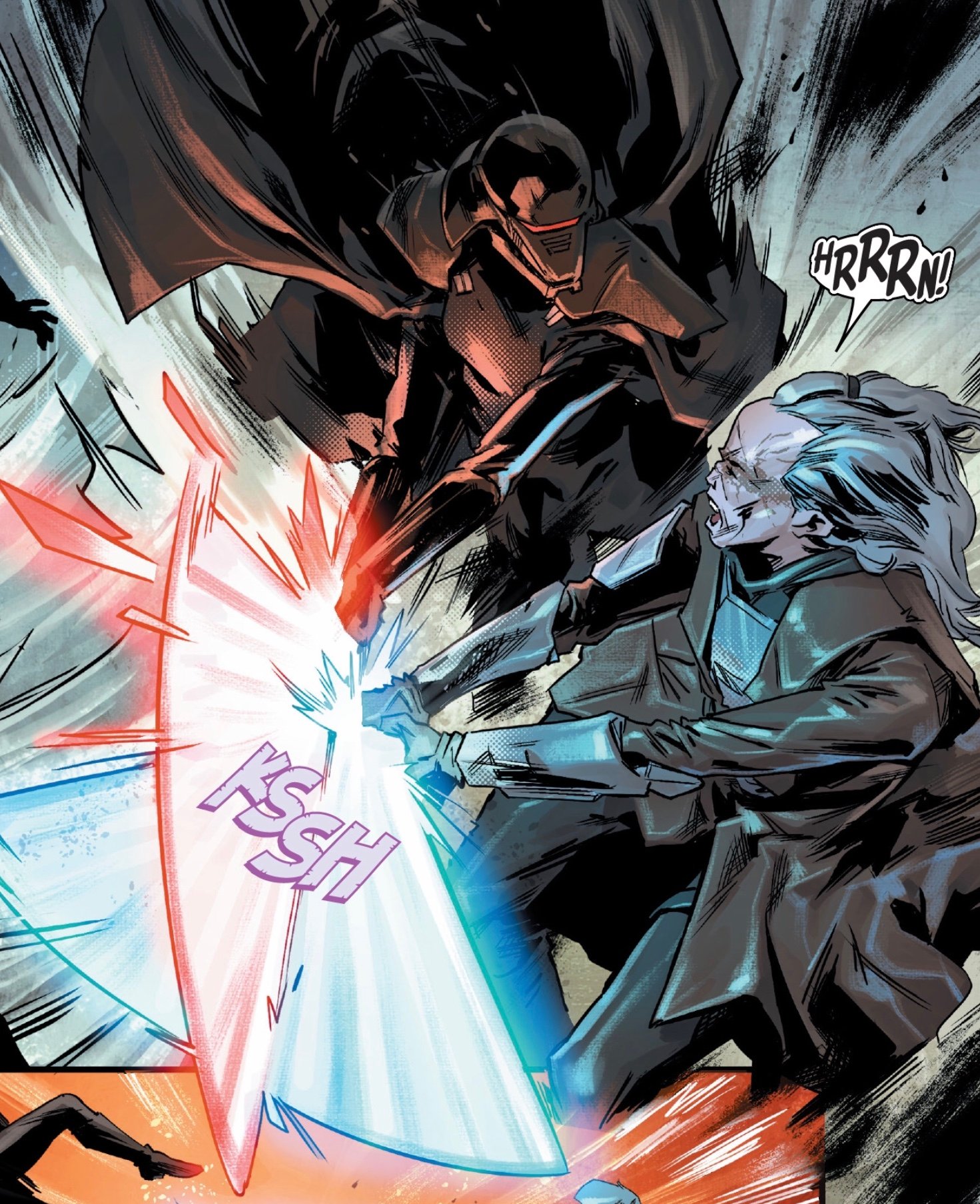 Cere isn’t the only one in a tough spot – we meet an unknown, lightsaber-wielding combatant giving Second Sister a fight. Though it quickly becomes clear this mysterious insurgent is not a Jedi, though they do seem to have skill and a possible connection to the Force. Like the previous issue, it opens with the Empire having deployed Second Sister to this battle because there was word of a lightsaber being used. The battle doesn’t last long, especially once Second Sister realizes she’s not fighting a Jedi. Second Sister disarms the mysterious attacker, declaring the Force has abandoned them and also questioning about the temple we heard about in the previous issue. 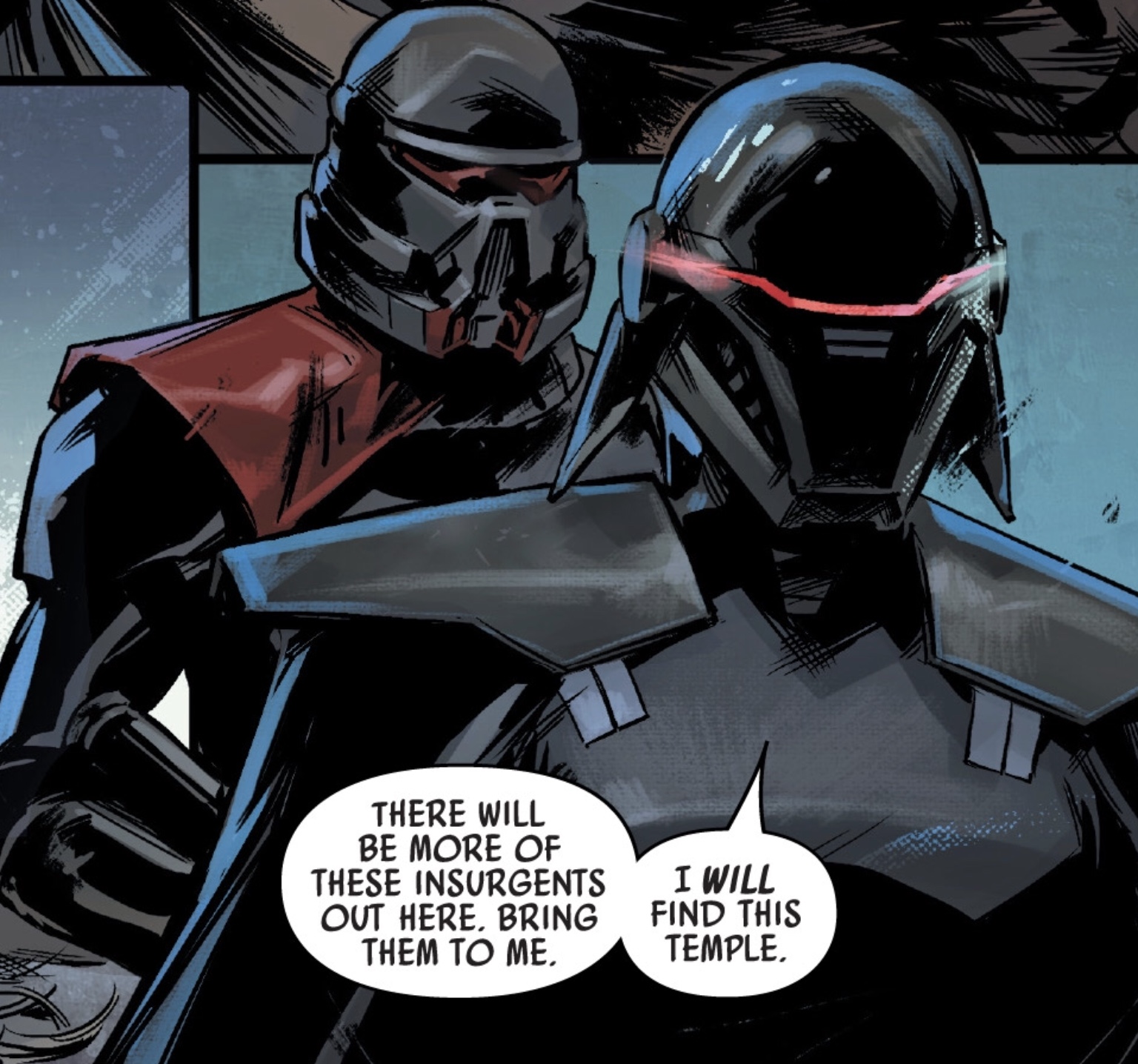 The attacker is killed when they continue to try and take on the Imperial forces with blasters and explosives. Second Sister dispatches them and realizes the insurgency on Ontotho is going to be a much bigger problem than they estimated. I’d like to point out how good the art in this issue is. Artist Paolo Villanelli and colorist Arif Prianto do such a great job highlighting the darkness clouding Ontotho while they suffer Imperial assault and now the arrival of a dark side fueled Inquisitor. The contrast between the present day and pre-Imperial flashbacks is so well done and highlights the tone of writer Matthew Rosenberg’s story. 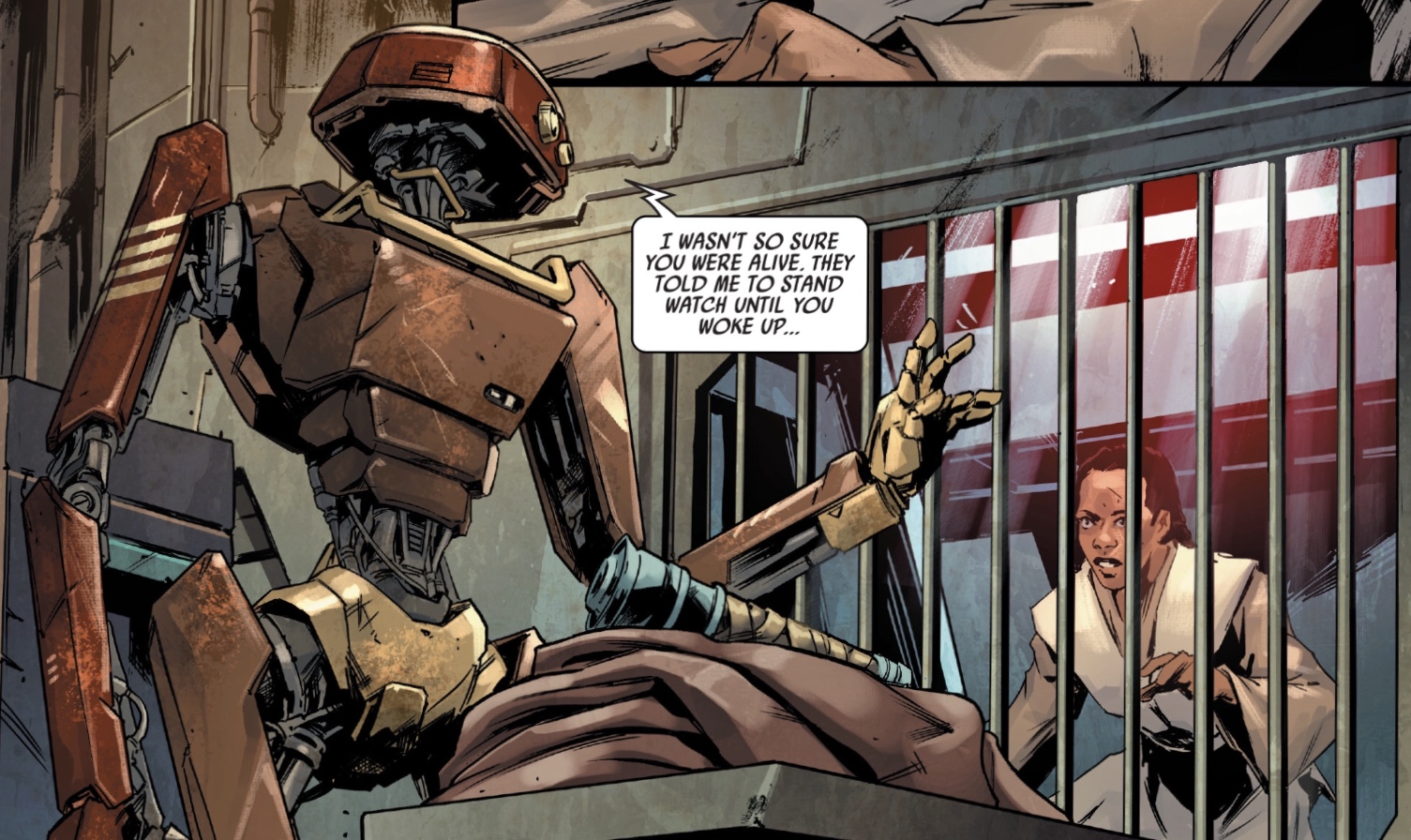 We flashback to rejoin Cere, who appears to be imprisoned by the Fylar – the presumed hostile culture standing between her and the ancient temple. She’s under guard by a droid but quickly fetches her lightsaber and breaks out of her cell. The droid warns others she’s conscious and not happy. The security force ask her to stand down and don’t wish to engage her. Cere is understandably cautious about her own tendency to be aggressive with her lightsaber skills, after what happened in the previous issue with her making a judgment to use force when it wasn’t necessary. The security forces are holding blasters, which makes her skeptical they don’t want trouble, but she also recognizes none of them are pointed at her. During the tense conversation, a familiar face appears to try and prevent escalation.

It appears to be the same person who fought Second Sister. Her name is Neralli and she tries to calm Cere, who is understandably on-guard and confused. We learn they placed Cere in a cell for her own protection and the door was actually never locked. Neralli also assures Cere her people were not responsible for the attack. Cere seems to believe her and lowers her lightsaber. Because the Jedi are foreign to her, Neralli assumes Cere is a Jedi Master, but Cere corrects her. Neralli offers to explain everything, starting with where they are. 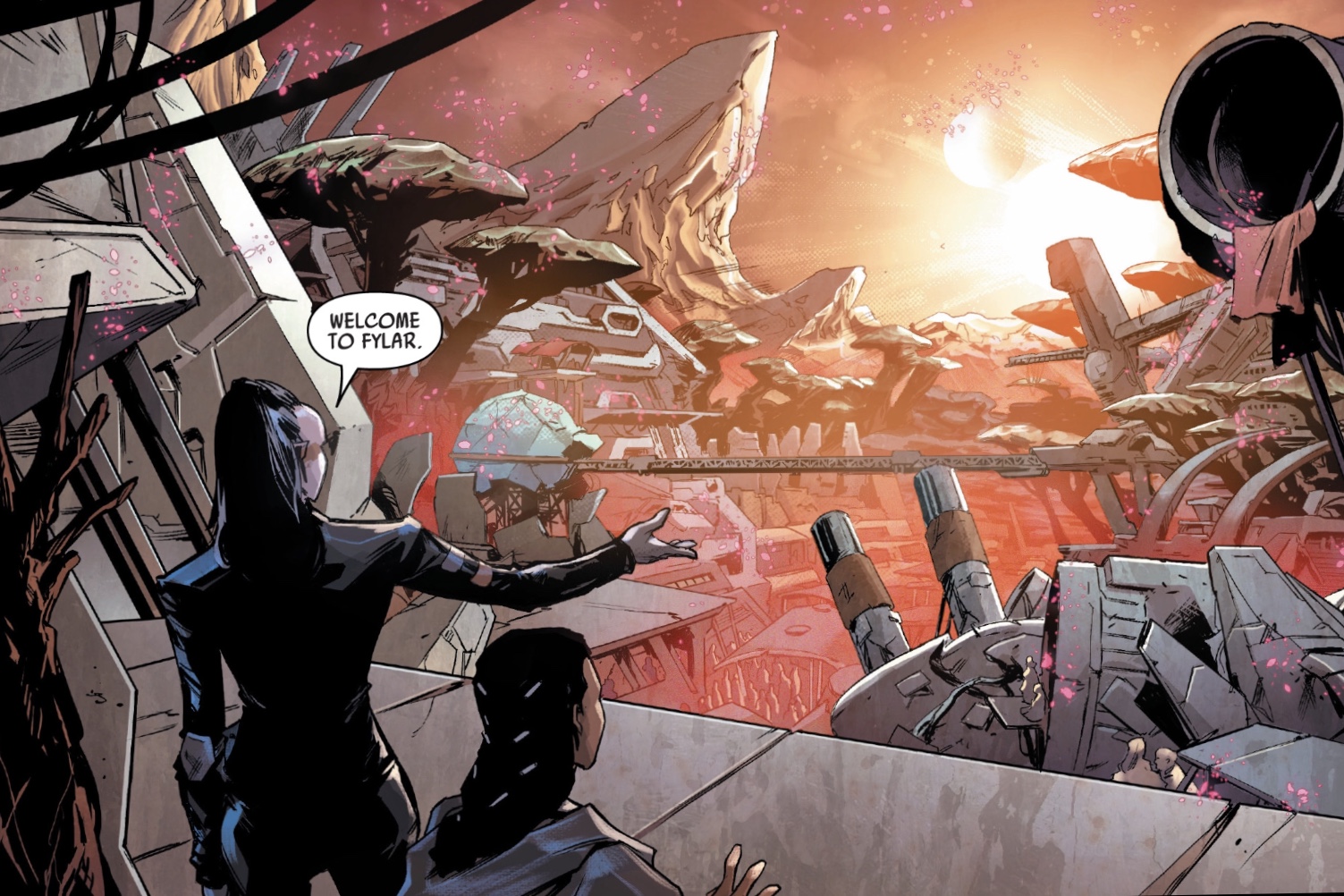 Again, really stunning art across the pages of this book. This is a visual feast for Star Wars fans and the art itself is worth the price of this issue. Neralli explains the Fylari are a peaceful people and simply weren’t interested in joining the greater galaxy – the Republic, specifically. As they begin to walk through the city, Cere notices a group of children trying to comfort some small animals called ‘musk teave’. The group of children share they have the ability to communicate with these animals, which definitely catches Cere’s attention.

It’s interesting to me that Neralli knows about the Force when the Fylari seem to be isolationists. There must be a history with the Jedi and I bet we learn more about that. These kids are quite interesting as well, as Neralli suggests they are Force-sensitive. This brings up an interesting question: What if many races around the galaxy don’t join the Republic because they are aware they have a significant Force-sensitive population and don’t want the Jedi to try and recruit among them? I mean, we know from the prequel films the Jedi monitor births and target Force-sensitive children at a very young age. I’m not trying to make the Jedi sound sinister but I think we should be realistic that in a diverse and complicated galaxy this approach would probably make a lot of people nervous. Cavan Scott’s Dooku: Jedi Lost does a great job of demonstrating how complicated this process can be for both the family and the Jedi hopeful targeted for recruitment. Anyways, Neralli also informs her that Master Cordova and everyone in the caravan were killed. Cere doesn’t understand why they Fylari would be under threat, so Neralli shows her what everyone is really after.

Neralli explains that Dylanto Daa, the executive of the Daa Corporation Cere and Master Cordova set out with before the attack, wants to get control of the temple. Neralli says the Fylari feel the need to protect the temple because it’s always been part of their society, even though they didn’t build it and don’t know who did. The sovereignty of Fylar hinges on the Ontothon government keeping out corporations who would exploit them. The Fylari seem to have been framed, as Neralli shows Cere part of a uniform they retrieved from the attackers of the previous issue’s caravan – it has the insignia of the Daa Corporation. If the corporation can frame the Fylari as hostiles obstructing a potential membership of the Ontothon to the Republic it would change the political climate pretty quick. Cere decides to go directly to the Ontothon government and inform them of Daa’s plans, even though Neralli cautions her the corporate security fill Ontotho City and will make things difficult for her. The padawan presses on with the plan the next day, making her way into a government building – along with a Fylari droid named En-Threelo – and confronting Dylanto Daa in front of what I assume is the ruling council of Ontotho. Just as they agree to help the Daa Corporation, Cere appears to inform them they were misled.

Daa reveals his smugness. Cere seeks to expose him but she’s too late. The council has decided to stand with Dylanto and the Daa Corporation. She says she needs to contact the Jedi Council, but the Ontotho officials order her to be taken into custody. Daa tries to frame her as delusional and spreading conspiracy theories when she reveals the piece of fabric the Fylari recovered from the attack on the caravan. We all know how well it goes when people try to take Cere Junda into custody. 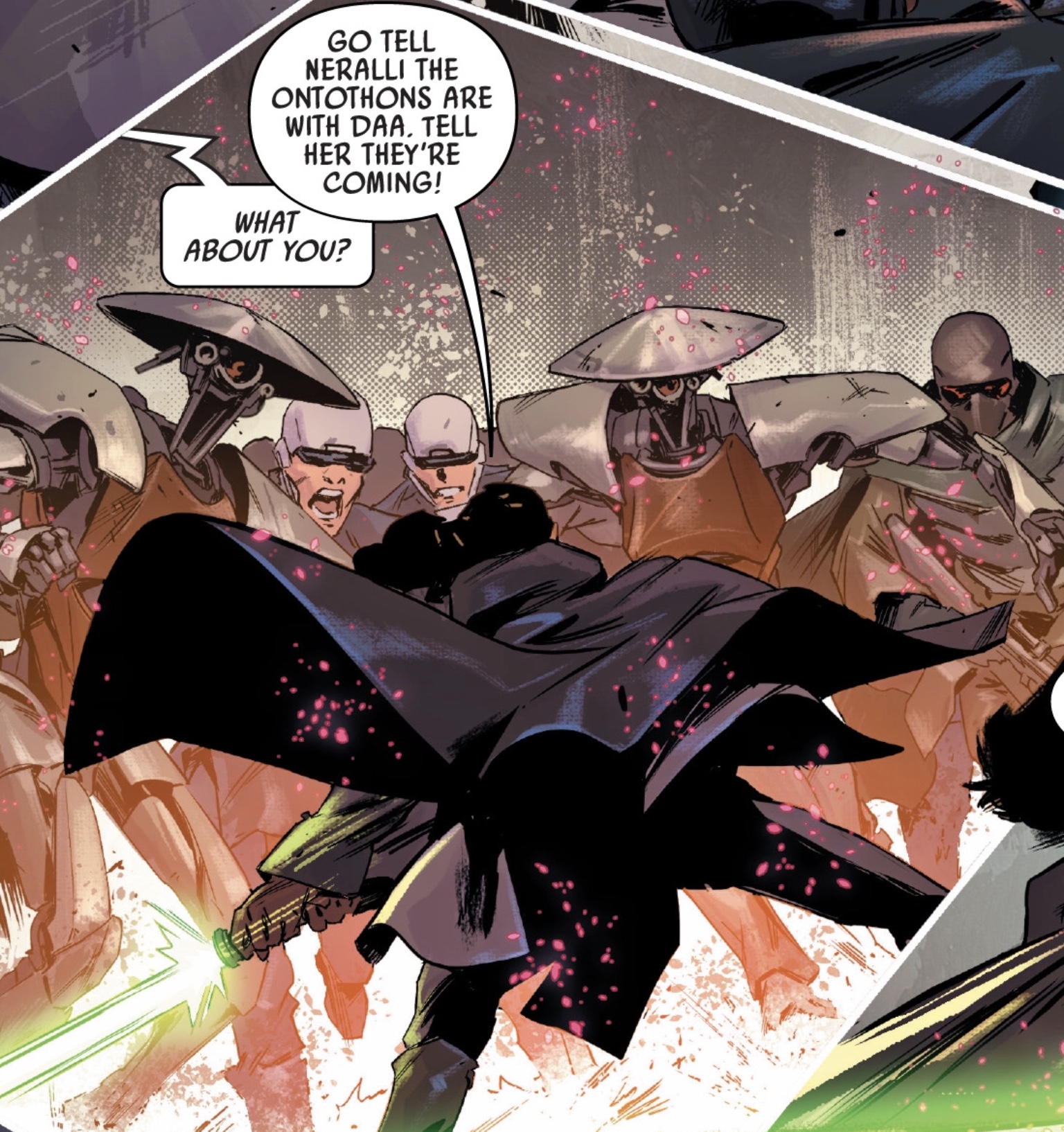 Cere dispatches En-Threelo to warn the Fylari. When she rejoins them after escaping the city, Cere warns Neralli they will need her help to deal with the incoming attack from the Daa Corporation. This is gonna be good!

I’m really enjoying this series. Cere Junda is a very interesting character and I’m excited to see her journey to eventually joining the Fylar Freedom Fighters, which is a big part of her story in the forthcoming game. I’m also happy we are getting more stories about the Jedi before the Clone Wars. Writer Matthew Rosenberg does an excellent job moving the dryer elements of the story along while balancing the action. Again, huge compliments to Paolo Villanelli and colorist Arif Prianto on the excellent arc. If you’re looking for some good old-fashioned, Jedi wielding lightsabers action accompanied by solid storytelling, I think this series is one you should invest in. It’s a lot of fun! 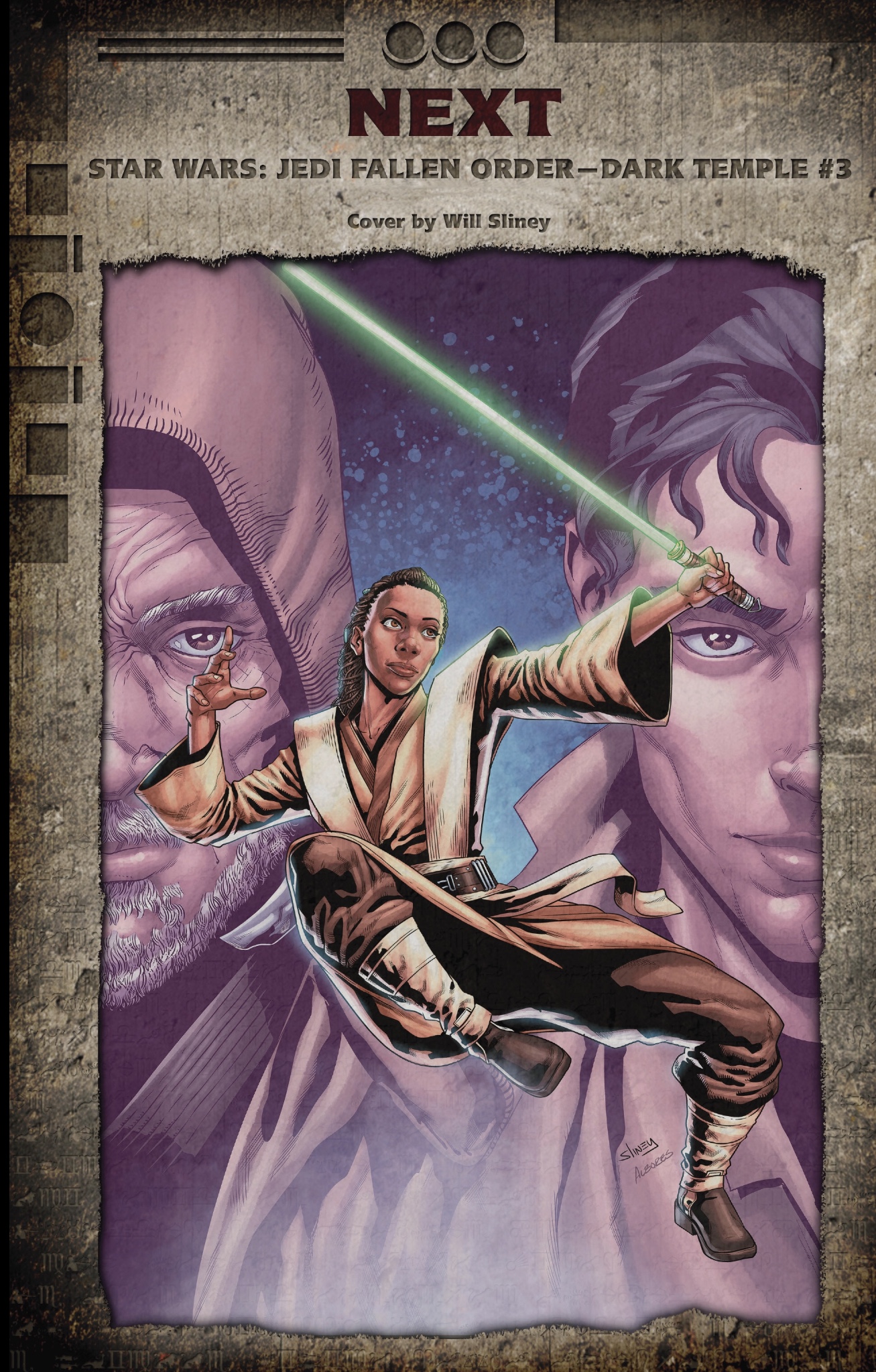 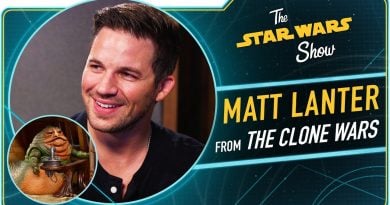 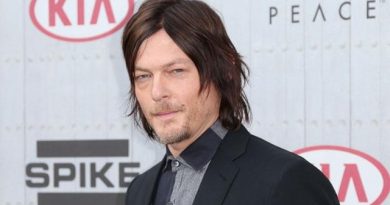 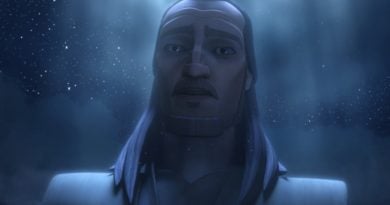 Liam Neeson on the Possible Return of Qui-Gon in Episode 7+ Al Pacino Reveals Why He Turned Down Han Solo Role in ANH.