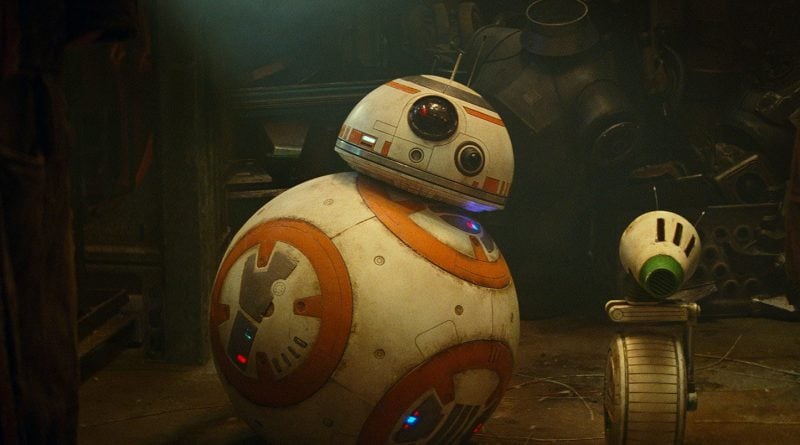 While many are still reeling from the incredible sneak peek of Star Wars: The Rise of Skywalker that debuted this morning, we thought it would be a great time to get our magnifying glasses and our fine-tooth combs out and take an even closer look at the footage.

Following a touching montage that covered some big moments across the entire saga, we get our first new glimpse of The Rise of Skywalker as the heroes of the Resistance (Finn, Rey, Poe, Chewbacca, and C-3PO) look out across a battlefield on what is most likely the desert planet of Pasaana. 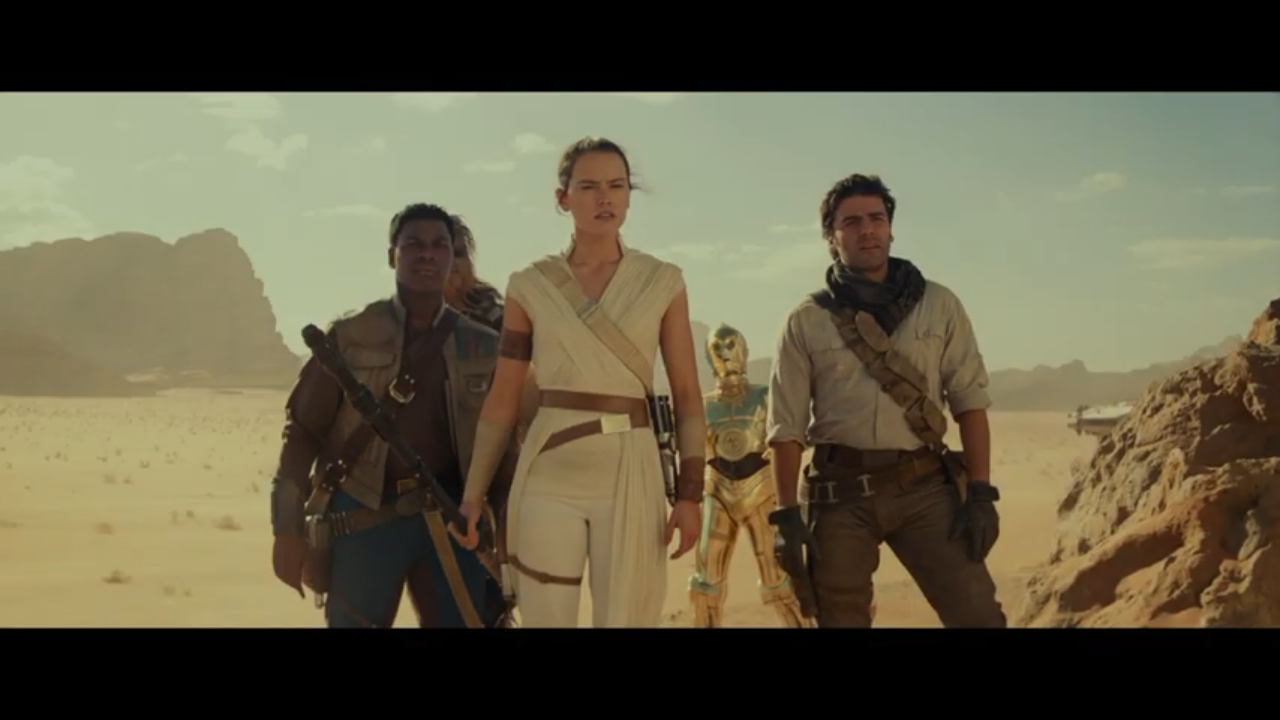 J.J. Abrams has pounded home the aspect that our main heroes will all finally be together in this final movie, going on an adventure together. In a lot of the footage Chewie and Threepio are with them, which leaves us asking again, where is Artoo? 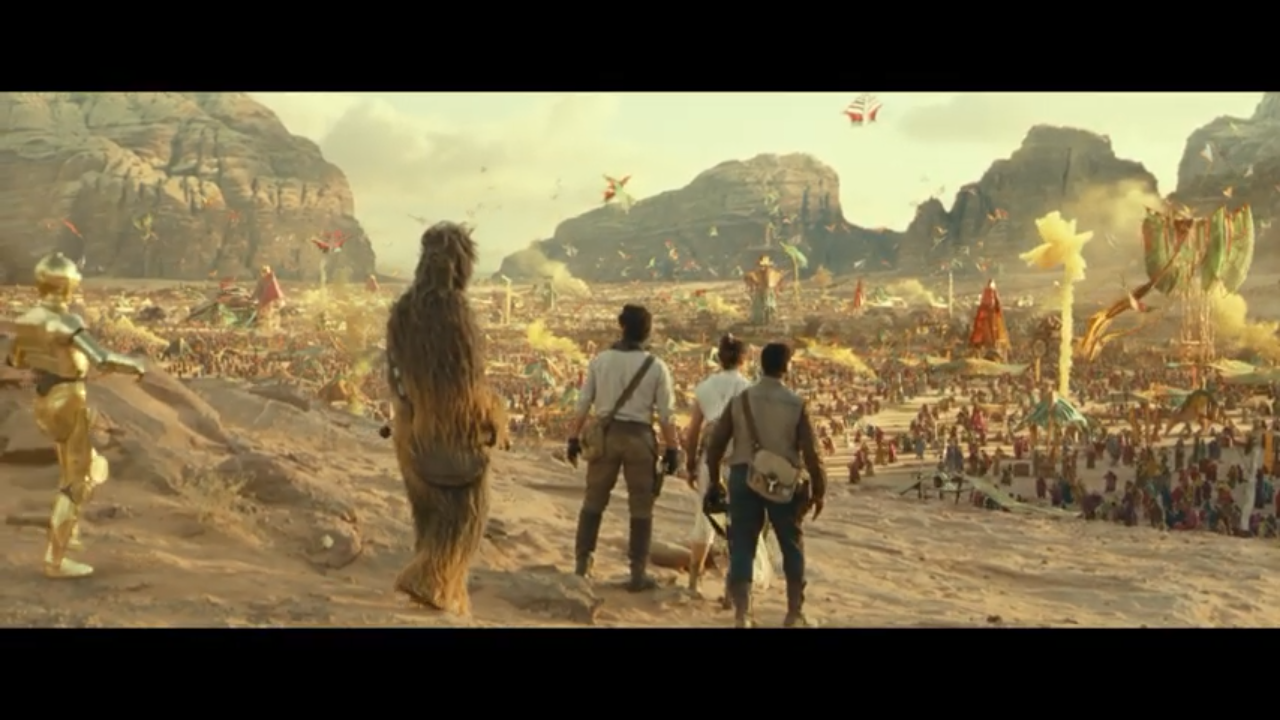 Then we get a solo shot of our beloved General Leia Organa in a jungle environment. Could this be on Endor or Takodana? Perhaps it is even a brand new location.

We speculate this is at the beginning of the movie, as Abrams confirmed that the jungle location is one of the earlier shots in the film where we saw Rey with a stick (not her staff) which turns out may be for some additional training or exercises. More on that a few frames down the line. 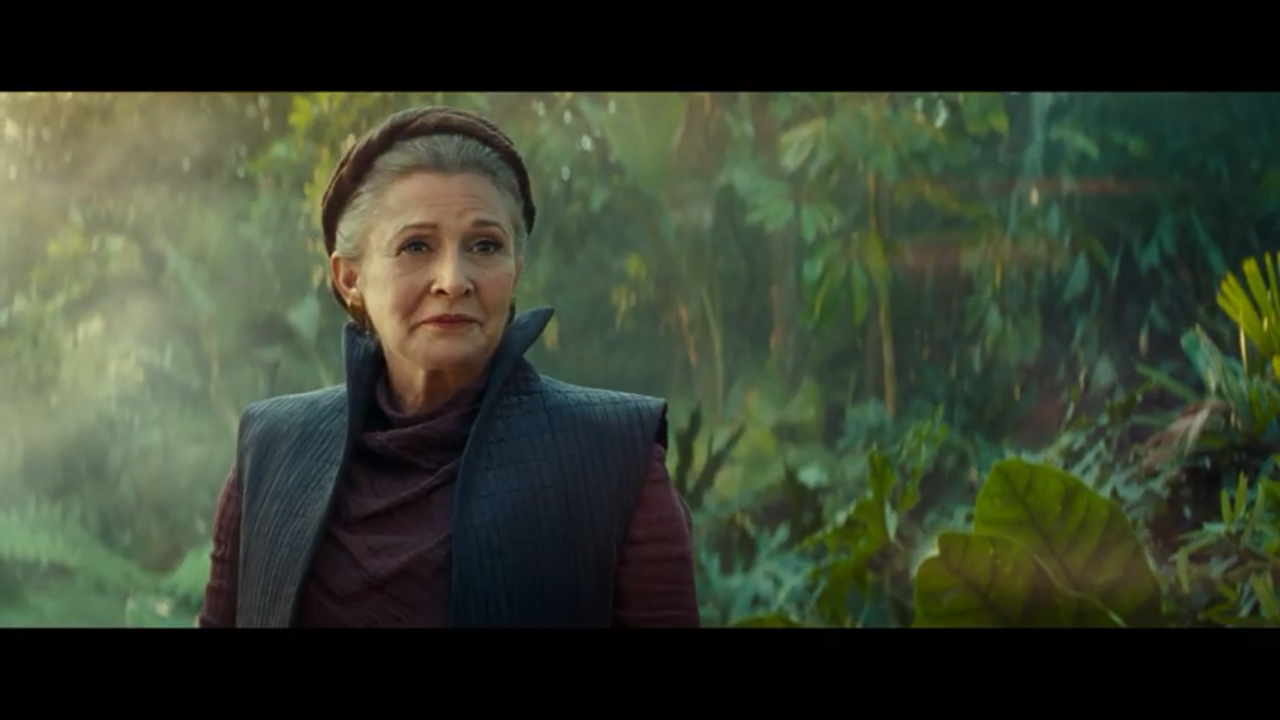 Leia is going to be an interesting part of this movie in that we don’t really know exactly how much she will be featured. We know the original thought was that IX would be her movie, but everything changed with Carrie Fisher’s passing. A couple of months ago we reported more details on how they will bring Leia to life in Episode IX. This is one of those shots we talked about. Speaking of bringing things back, how about some ships for the good guys! 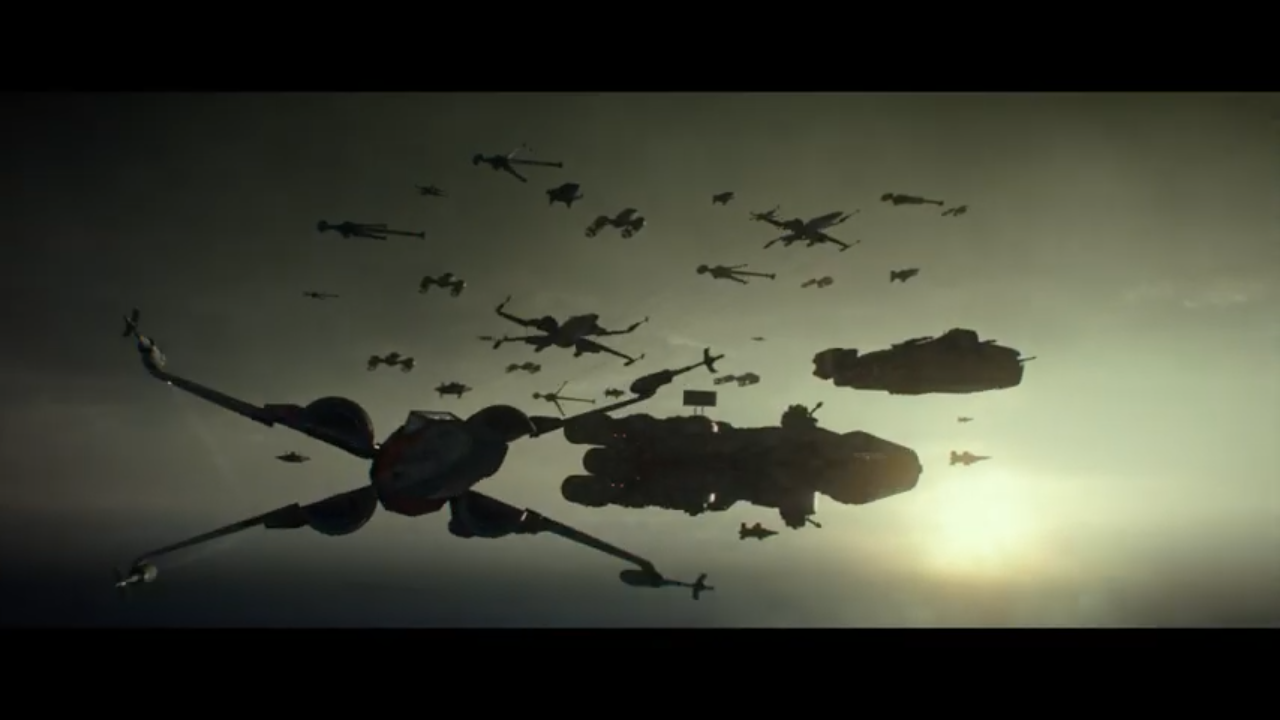 We expect no shortage of Easter eggs and callbacks to the original trilogy and prequels, and a good way to do that quickly on a grand scale is via ships as we see in the shot above there are X-wings, Y-wings, B-wings, A-wings, potentially even some CR-90 corvettes (like Leia’s first ship in A New Hope, the Tantive IV) and what looks to be a YT freighter that isn’t the Millennium Falcon! And now for the bad guys… 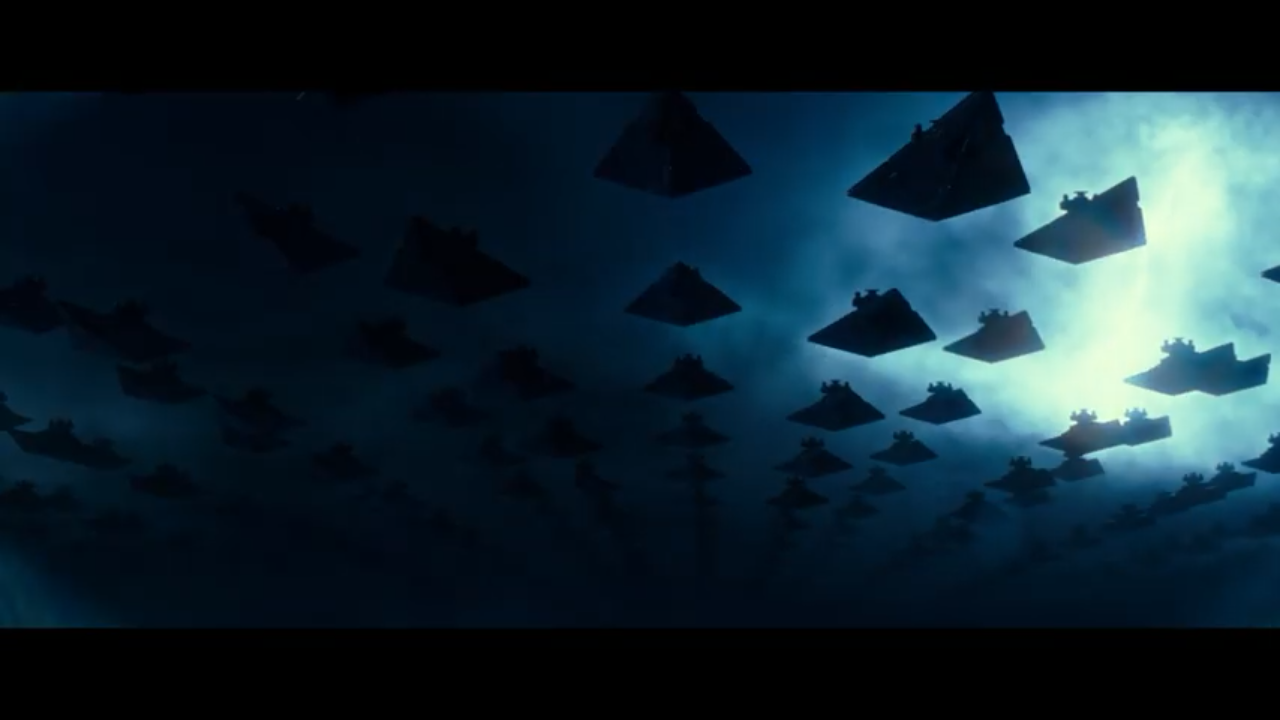 As we have seen many die-hard fans pointing out, these are Imperial Star Destroyers from the Empire’s reign. We know from the Aftermath book trilogy and the Battlefront 2 video game’s story that Emperor Palpatine had a contingency plan in place that was set in motion at his supposed death. The Last Jedi novelization from Jason Fry even mentions that the Emperor had been seeding the Unknown Regions of the galaxy with storehouses, shipyards, and laboratories for decades. Perhaps this fleet has been hiding there all this time just waiting for the moment to strike. We are used to seeing a few Star Destroyers in shots here and there, but this is on a scale we have never seen before. How long does the line go? 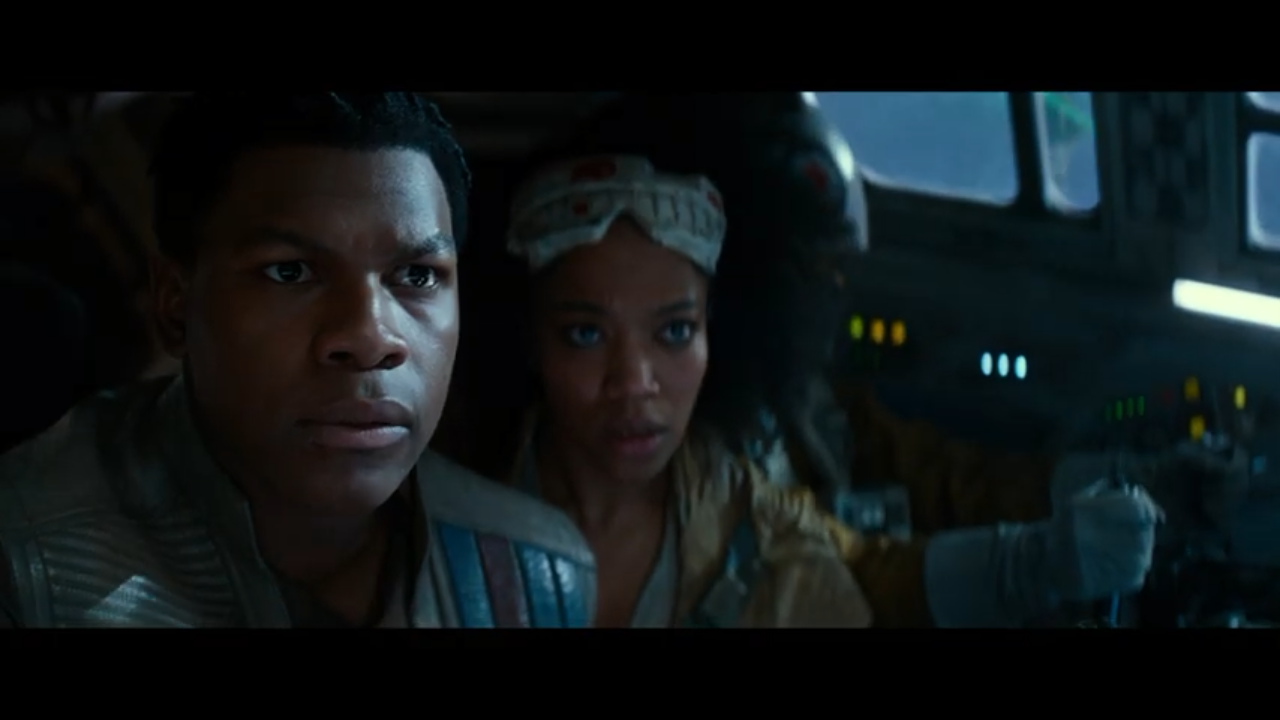 We don’t know what ship Finn and Jannah are in here, but they are clearly concerned. The look of the windows and the very action-figure looking pilot leads us to believe that this is not the Millennium Falcon, but perhaps some Resistance/Rebellion ship they are being transported on, while witnesses a battle of some kind. What ship do you think they are on? Something very familiar? Or something new? Or this could even be a ground transport of some kind. 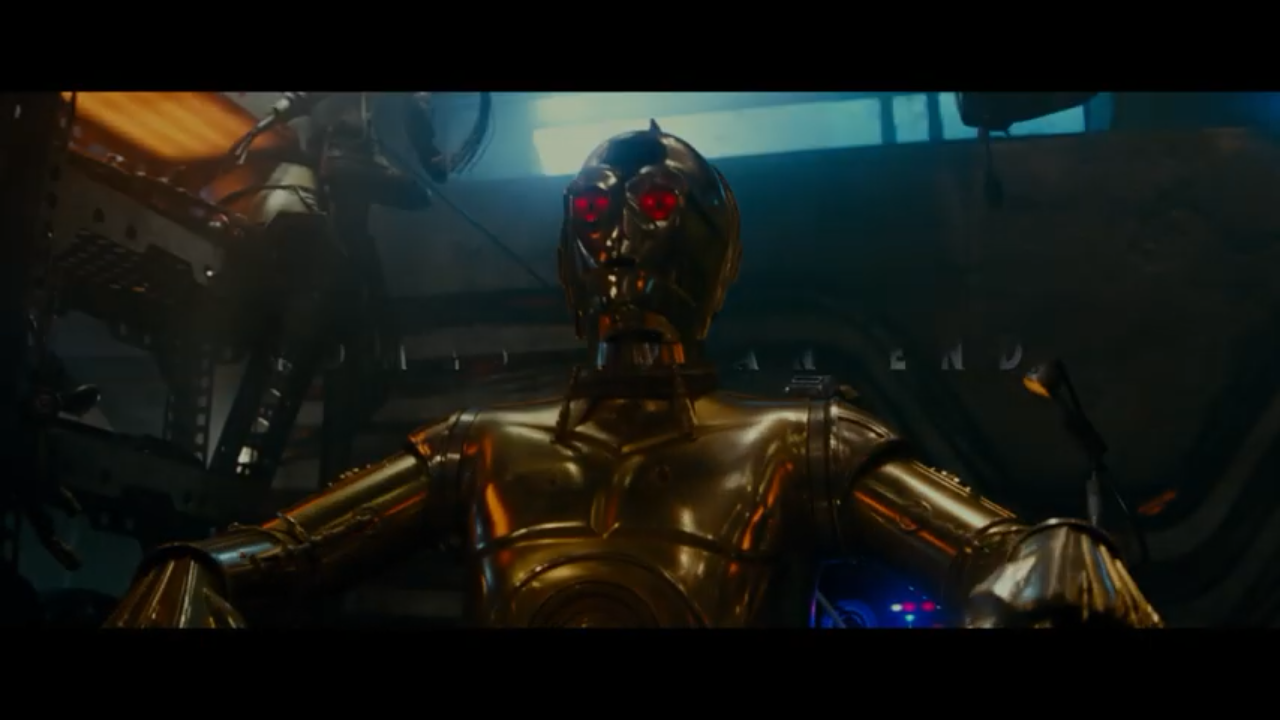 You probably don’t recognize him because of the red eyes. Threepio finally got his golden arm back and J.J. decides to change another body part to red. There have been many rumors about Threepio’s role in The Rise of Skywalker, with Anthony Daniels himself saying that this might be his most ‘front and center’ role to date, a perfect way to say farewell. 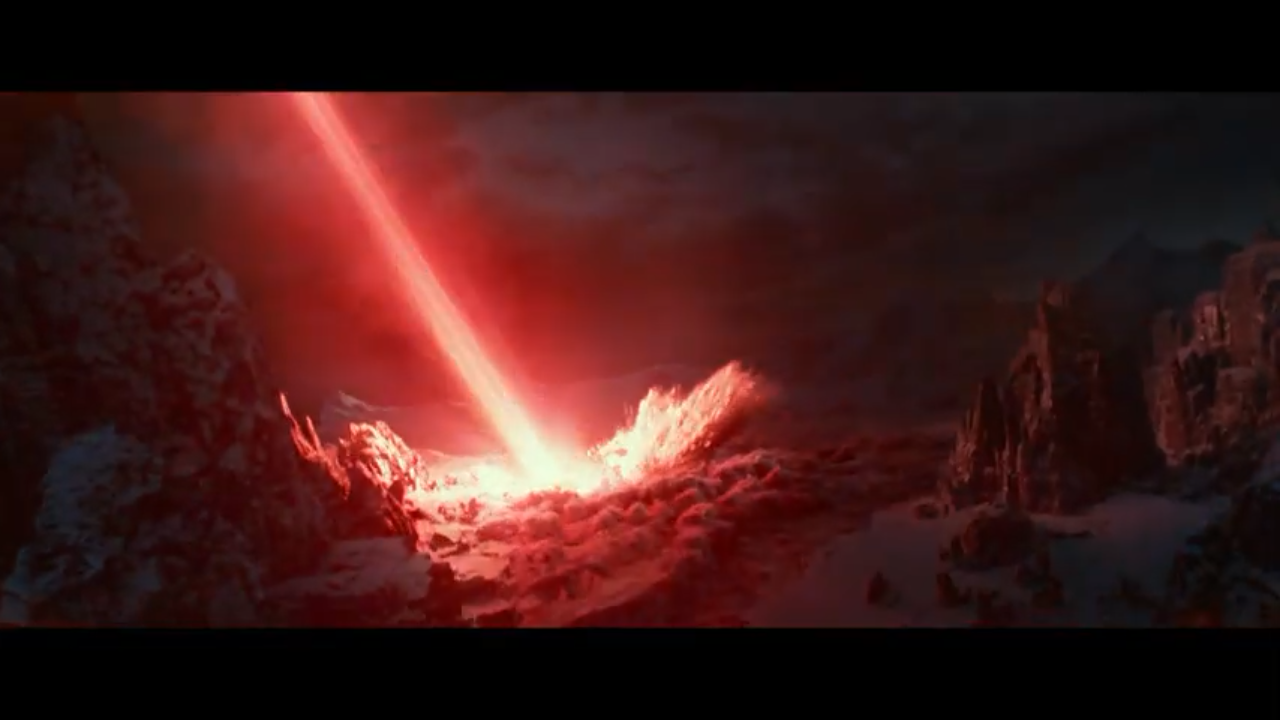 At face value these shots are reminiscent of the Death Star blasts on Jedha, or even via Starkiller base. Could there be concentrated firepower in The Rise of Skywalker that doesn’t necessarily come from a massive super weapon? We’ve heard of the potential for Star Destroyers being facilitated and equipped with weapons that carry this potential. If the weapon is kyber-based like the Death Star laser, it’s interesting to note that the laser is red like a Sith lightsaber. In the Star Wars canon, for a kyber crystal to produce a red blade, it has to be corrupted or “bled” through the dark side. It would certainly take a very powerful dark sider to produce something like this… 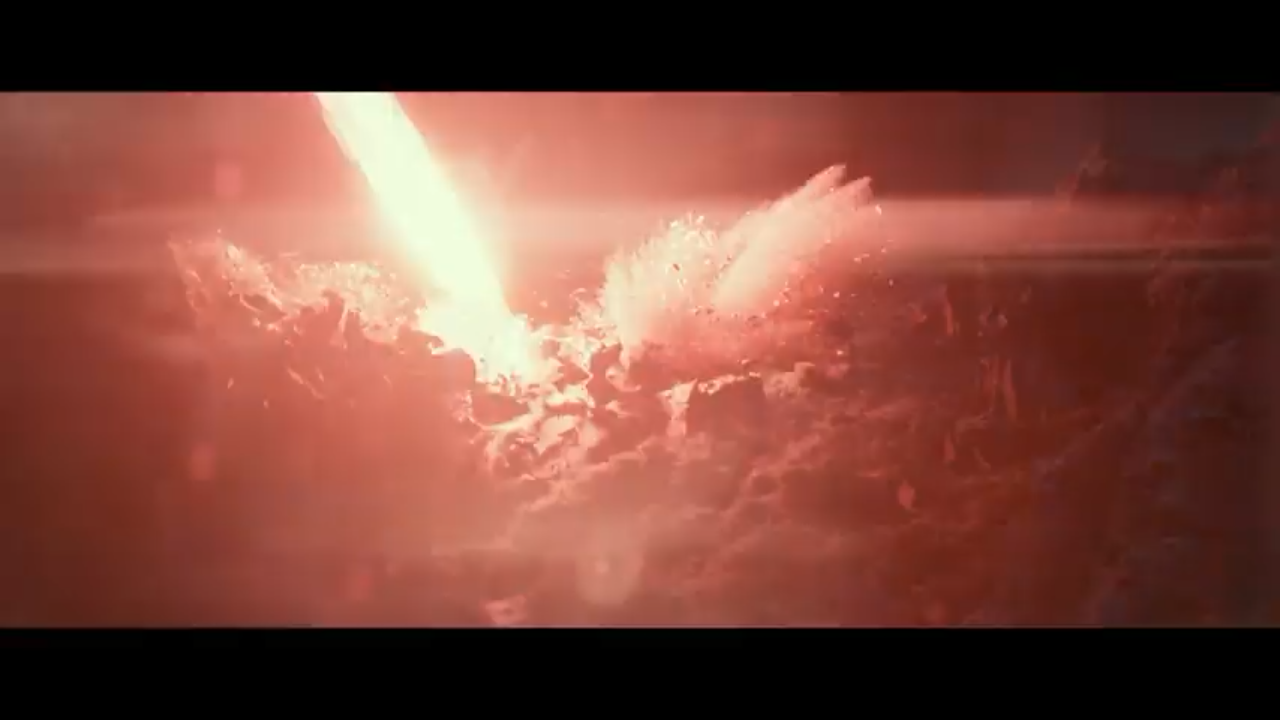 This next shot shows Rey throwing her lightsaber, and you can see, between the two trees, what appears to be a training remote (similar to one Luke used on the Millennium Falcon that also appeared as an Easter egg in The Force Awakens). The scenery looks similar to what was in the background when Leia was hugging Rey in the first teaser. This is likely early in the movie, with Rey going through some training and exercises before taking off with the crew to start the adventure. 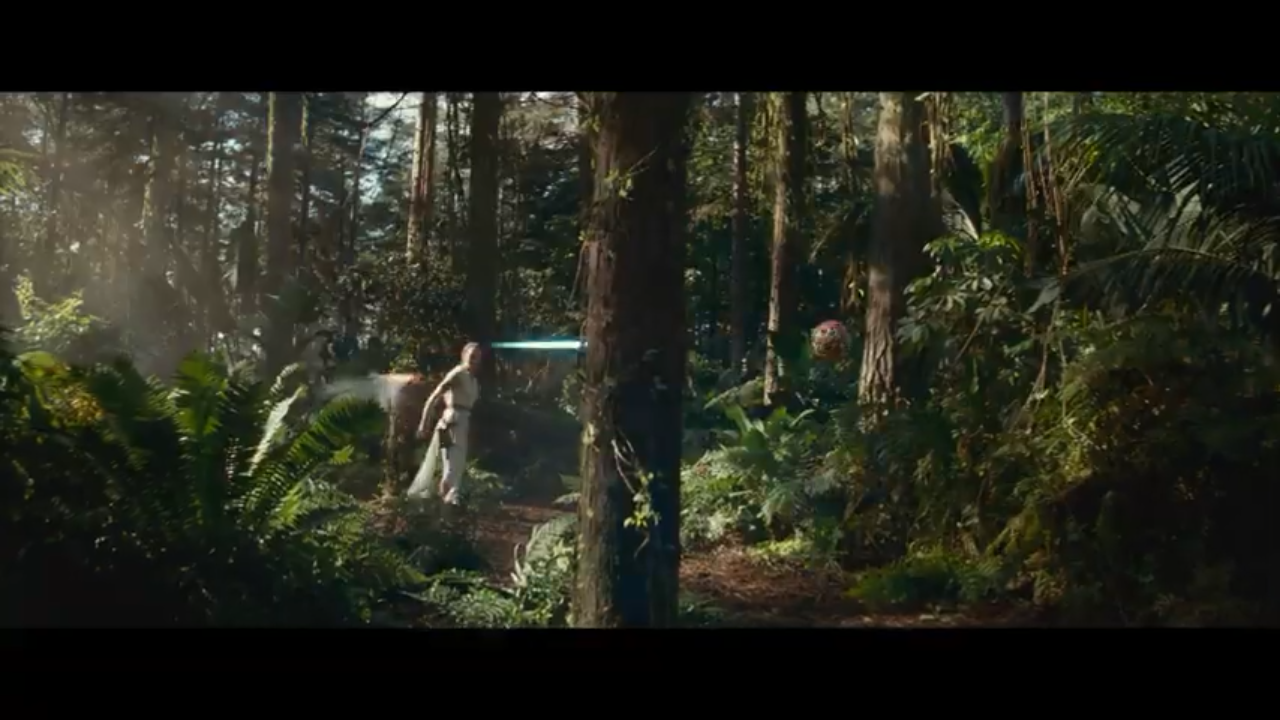 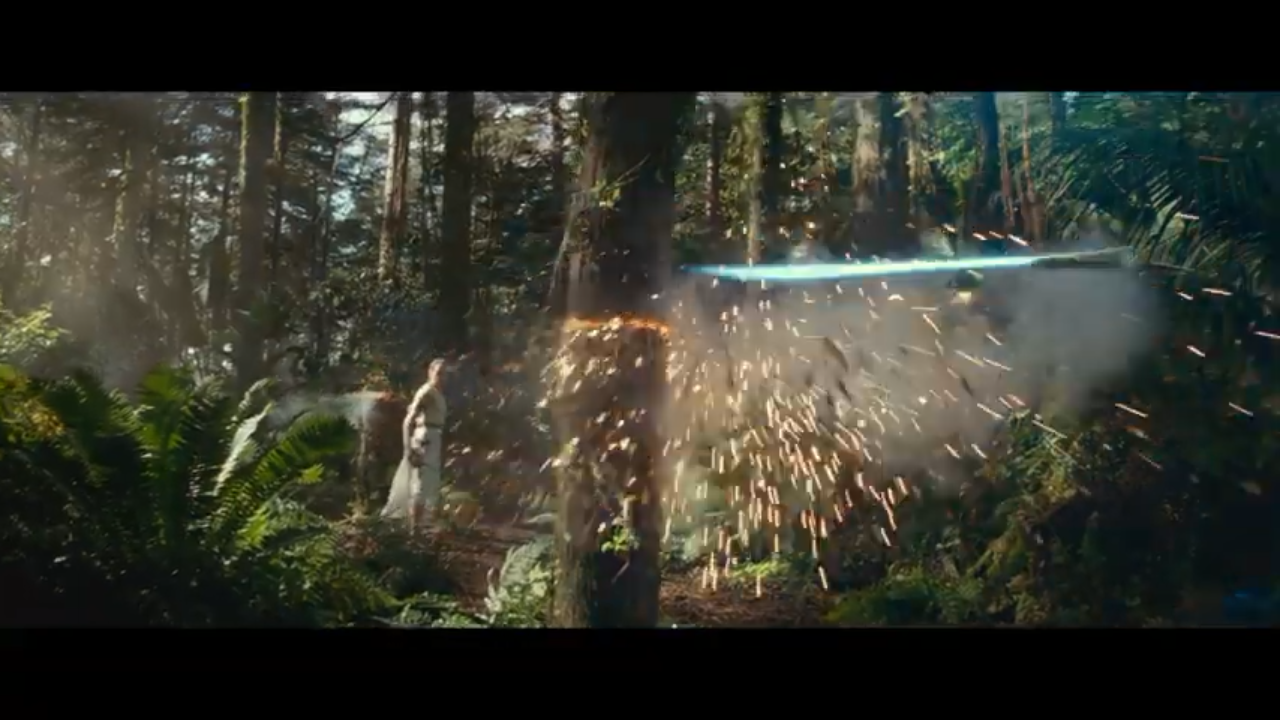 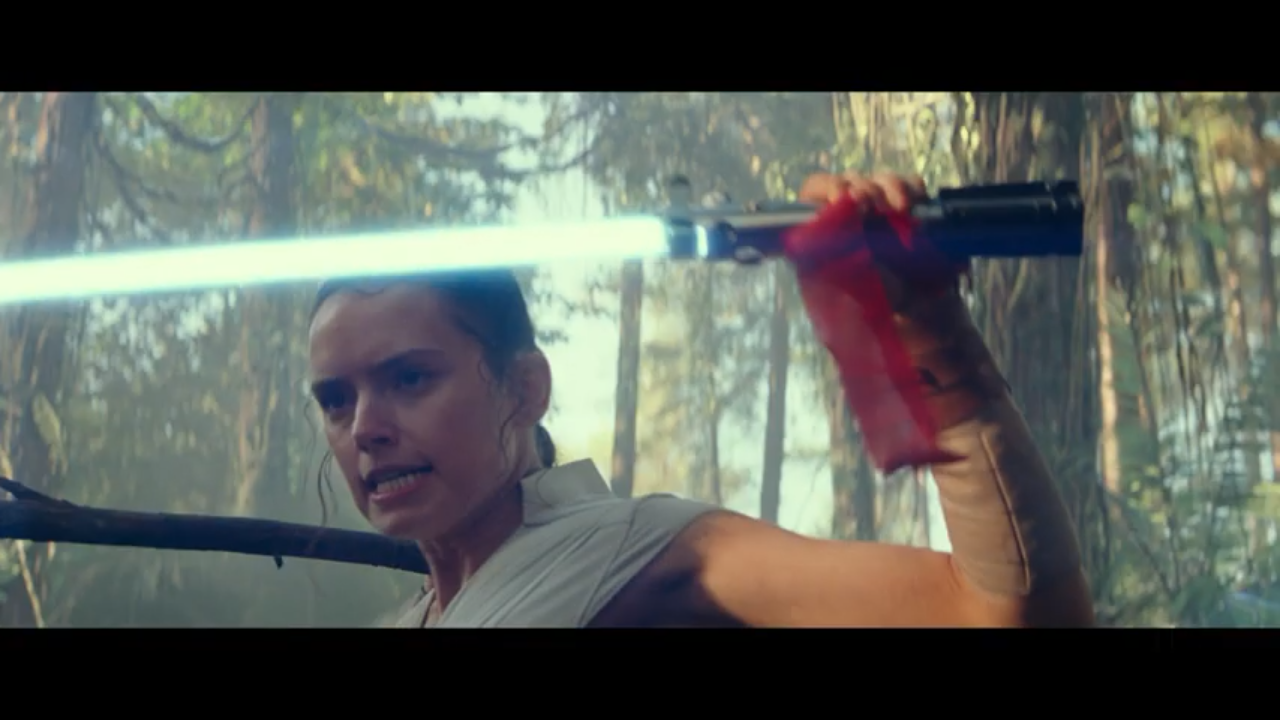 As the Prince of Darkness enters the scene, we hear the beginning words of a new line from Emperor Palpatine… 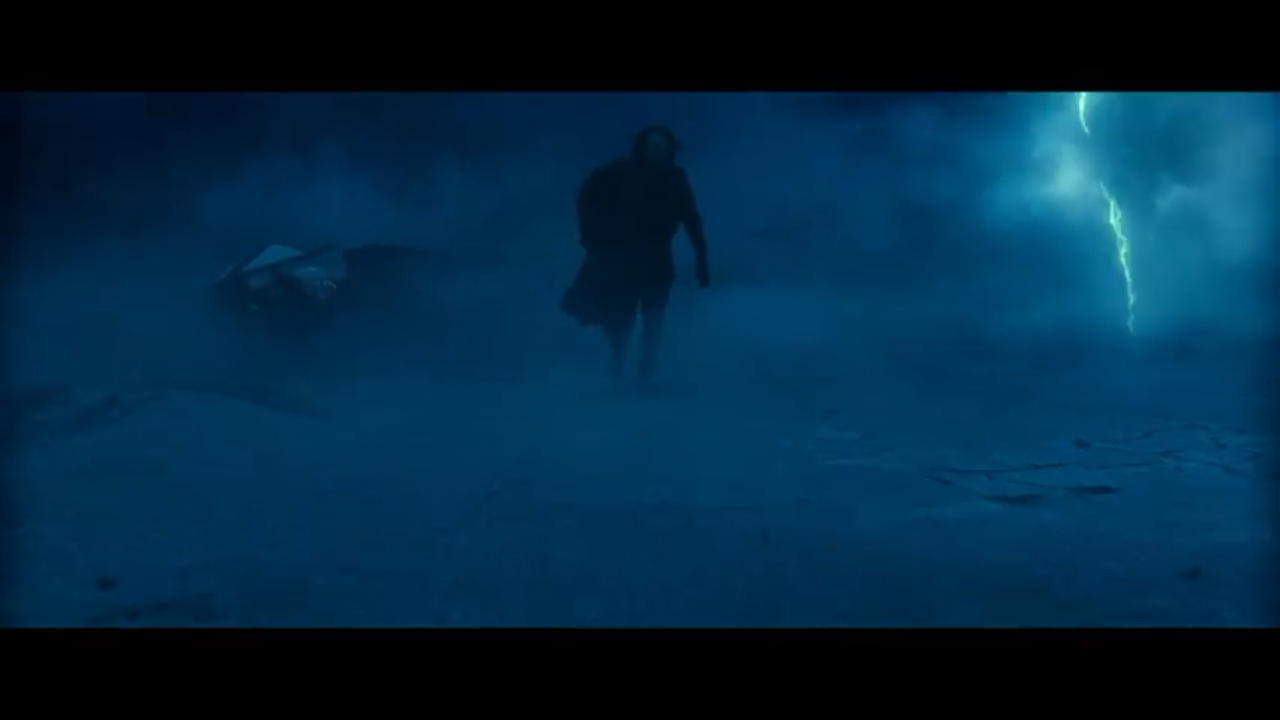 Kylo Ren has arrived for what appears to be that big final duel with Rey. You can see the TIE he has arrived in is the same one that Rey backflips over in the first teaser from April, and if the new teaser poster is any indication, these aren’t your standard thunderstorm lightning bolts. 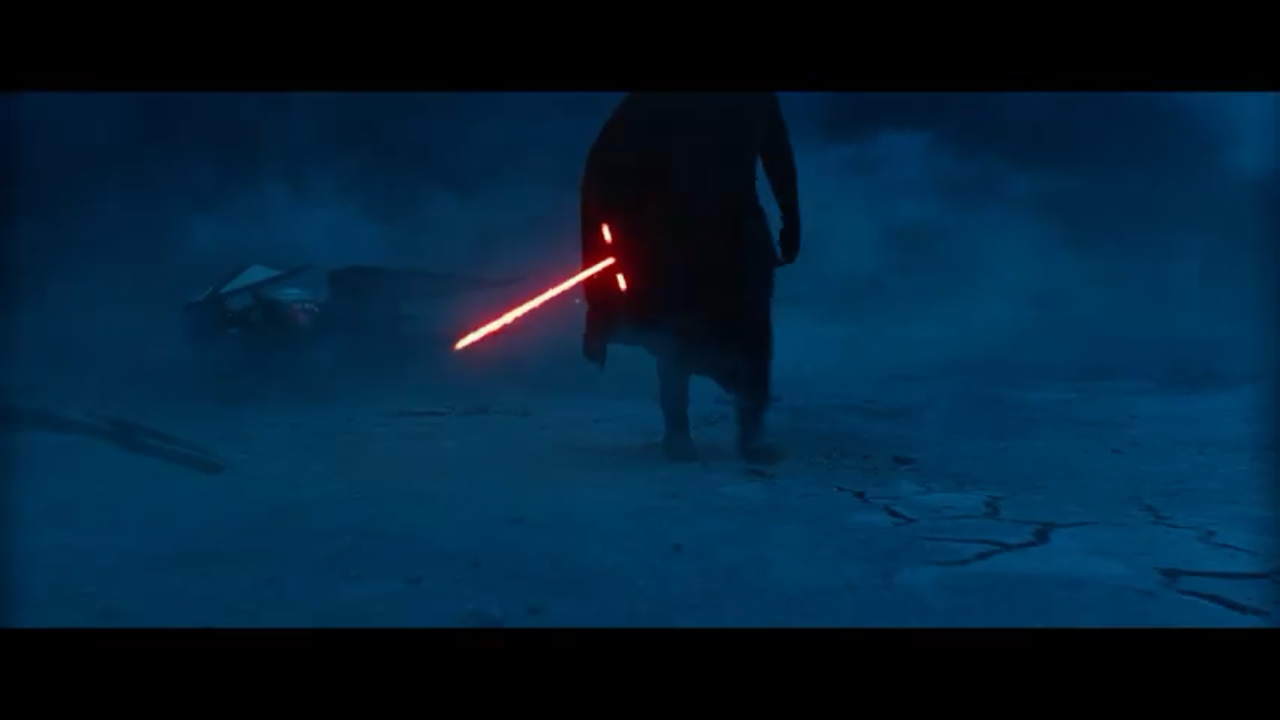 We don’t know if the shot above or the one that follows are all that connected, as one is clearly on some sort of cracked and hard terrain and the next is atop the wreckage of what is likely Death Star II. There was some speculation going around that Rey and Kylo Ren might be fighting on top of a crashed Millennium Falcon, but it now appears clear they are on top of the wreckage of the super weapon where we last saw Palpatine plummeting to his presumed death. 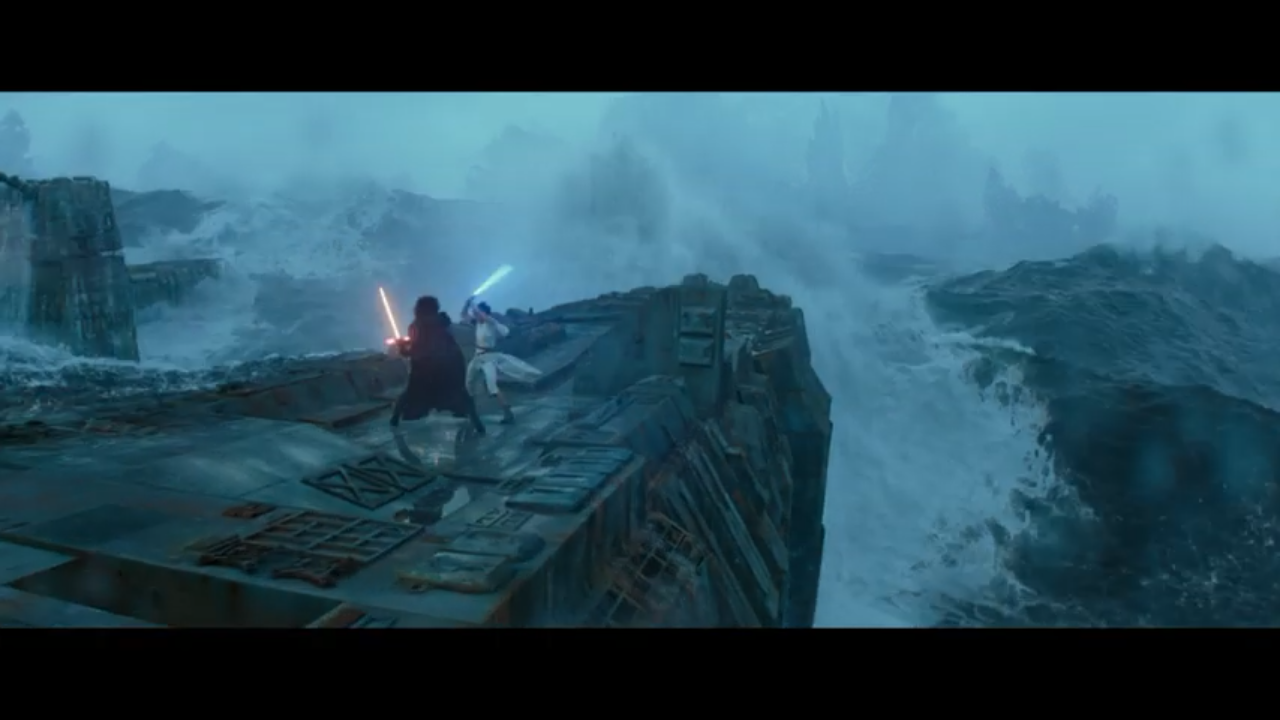 After the interesting break from lightsaber on lightsaber action that we took in The Last Jedi, it is good to see that we are getting the return of lightsaber duels, a staple in Star Wars since Darth Vader faced off against his old master, Obi-Wan Kenobi, over 42 years ago. 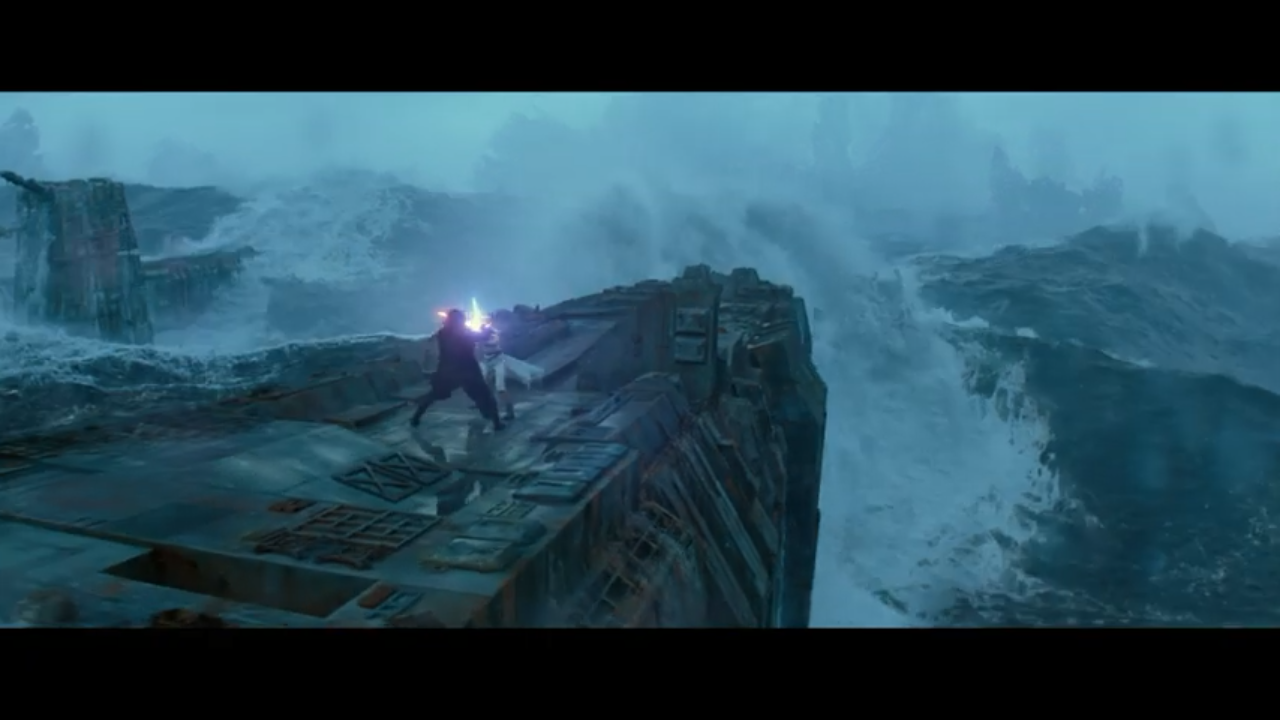 It’s interesting that this seemingly final confrontation between Kylo Ren and Rey happens surrounded by water. This may be reading into it too much, but it is noticeable how this creates a distinct mirror image of Anakin’s “descent into hell” in the Mustafar battle.  What could this mean for the story?  Its speculative, obviously, but it would be a very symbolic backdrop for any rebirth of the man formerly known as Ben Solo.  At the same time, it could just be representative of the old Empire finally sinking to the depths of history.  Only time will tell. Or maybe this is not the final confrontation at all… 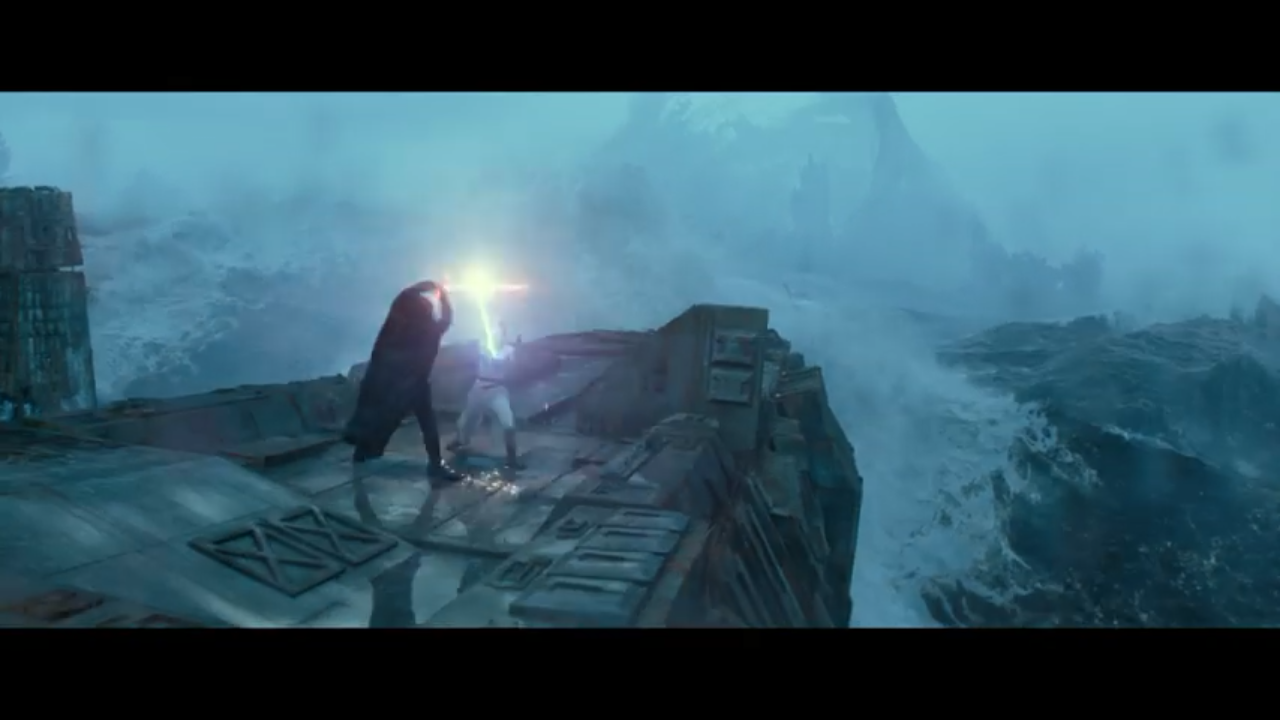 The final moment of the clip is what has fans going absolutely rabid online. As darkness covers the screen, Palpatine finishes his line breaking the silence…

“[Your Journey] nears its end.”

Then we see Rey, in a dark robe, wielding an unstable double sided lightsaber which unfolds in her hand. This design was first seen used by the Jedi Temple Guards in Rebels, which featured yellow blades. It’s possible there is a tie-in to that, or it may simply just be a nod to a cool design from animation that they wanted to include in the movie. 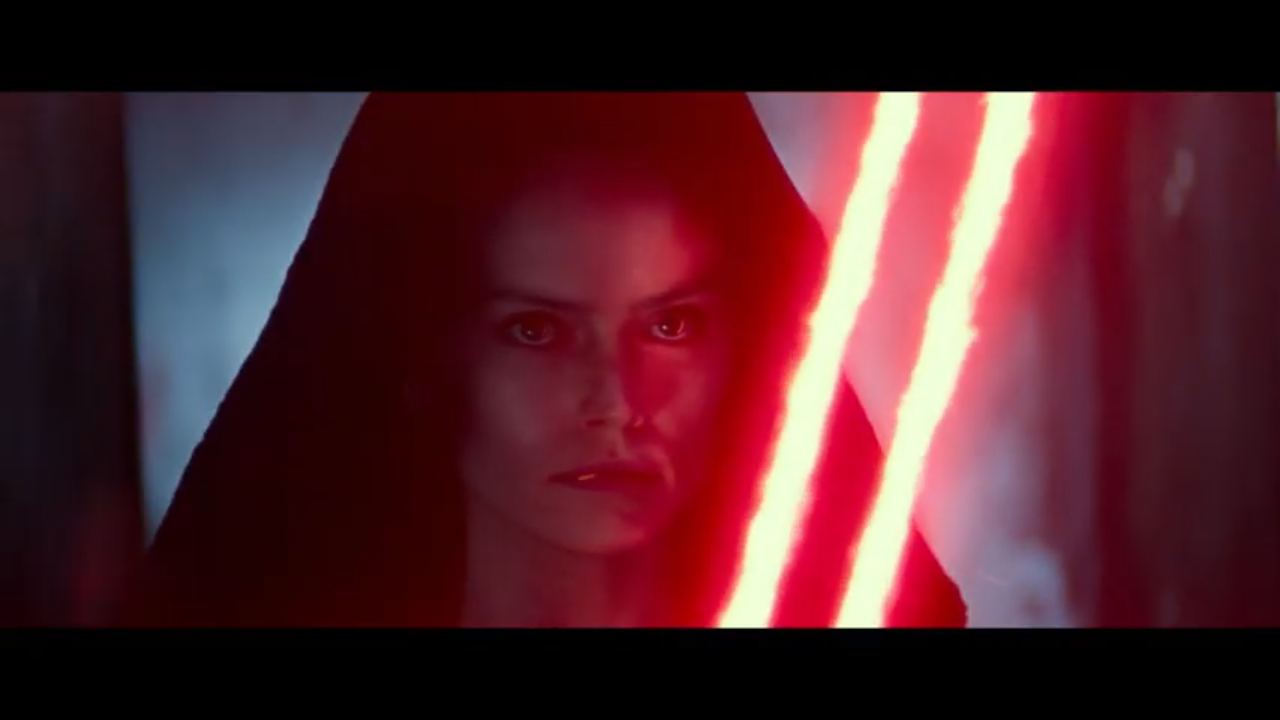 Some of you may have noticed that Rey’s face looks really weird in this shot. That’s because the lighting on her face is not natural. It seems that the red lighting effect on Daisy’s face was added later in post production. This is a normal process, but still it’s strange since they use real glowsticks on the set to achieve that. Why didn’t they use some for this shot as well? Or was this only made for this footage?

The bigger question is, why is Rey dark side? If this were to be a major twist/turn in the movie, would J.J. Abrams show it in a sizzle reel in August? I don’t think so. The shot fades in after we hear faint whispering, which reminded me of the whispering Rey heard when she experienced her visions on Ahch-To. I think this is Abrams’ way of letting us know that this is a vision of some sort. Is it what Rey would have become had she joined Kylo Ren on the Supremacy when he asked her to let old things die and start a new order? 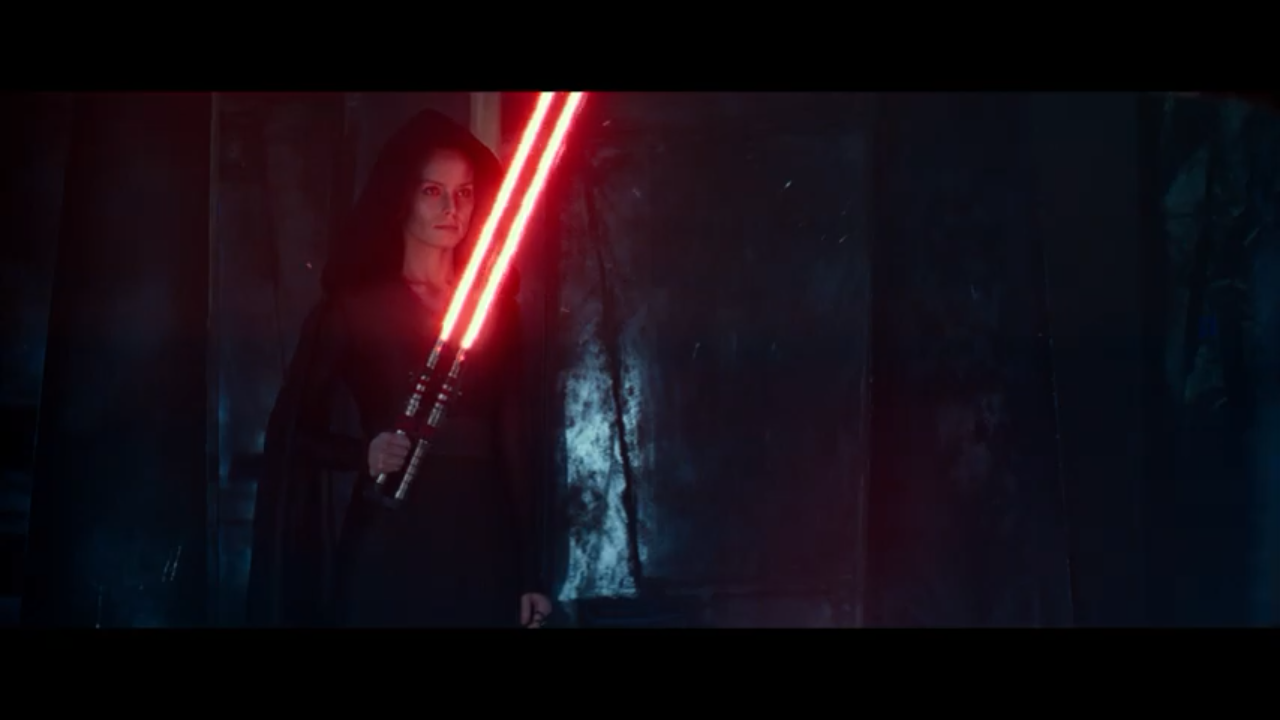 If it is not a dream or vision or some sort, and is a tangible change that Rey goes through in the movie, what is going on? Is she possessed? Is that ring on her finger controlling her via Palpatine? There are so many questions carried with these final shots, and it’s no surprise these were the last frames in the clip. 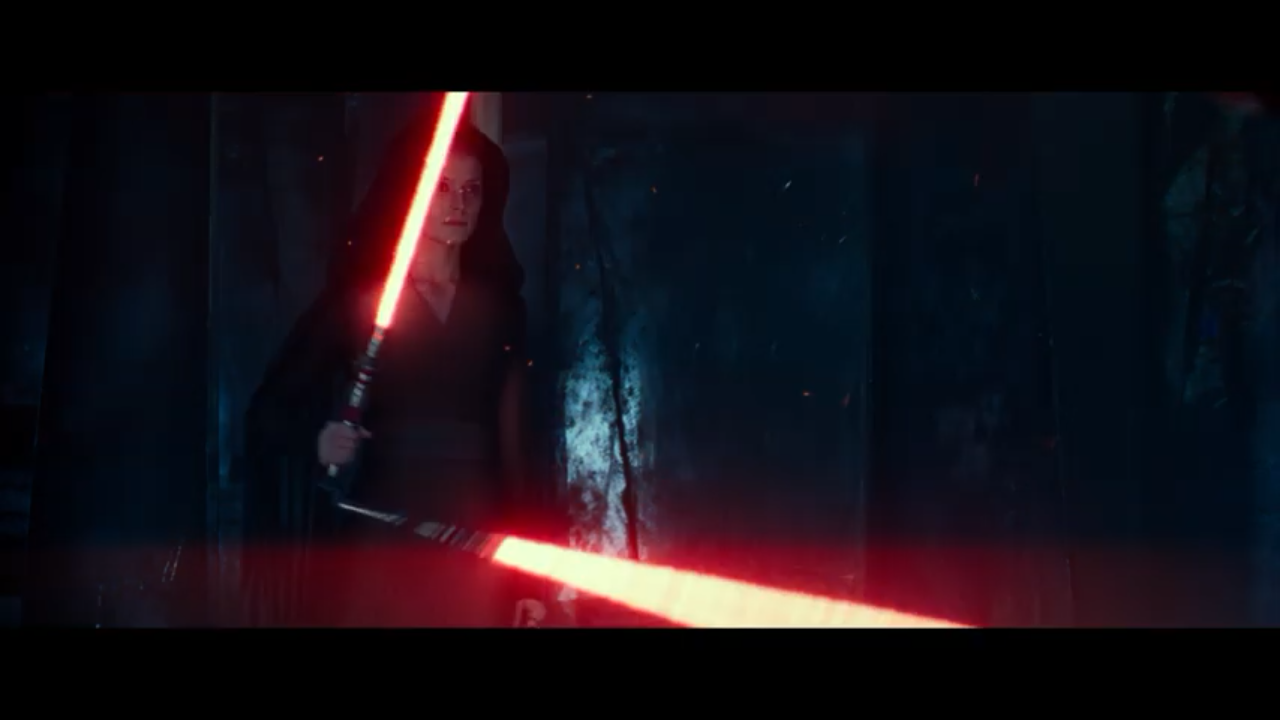 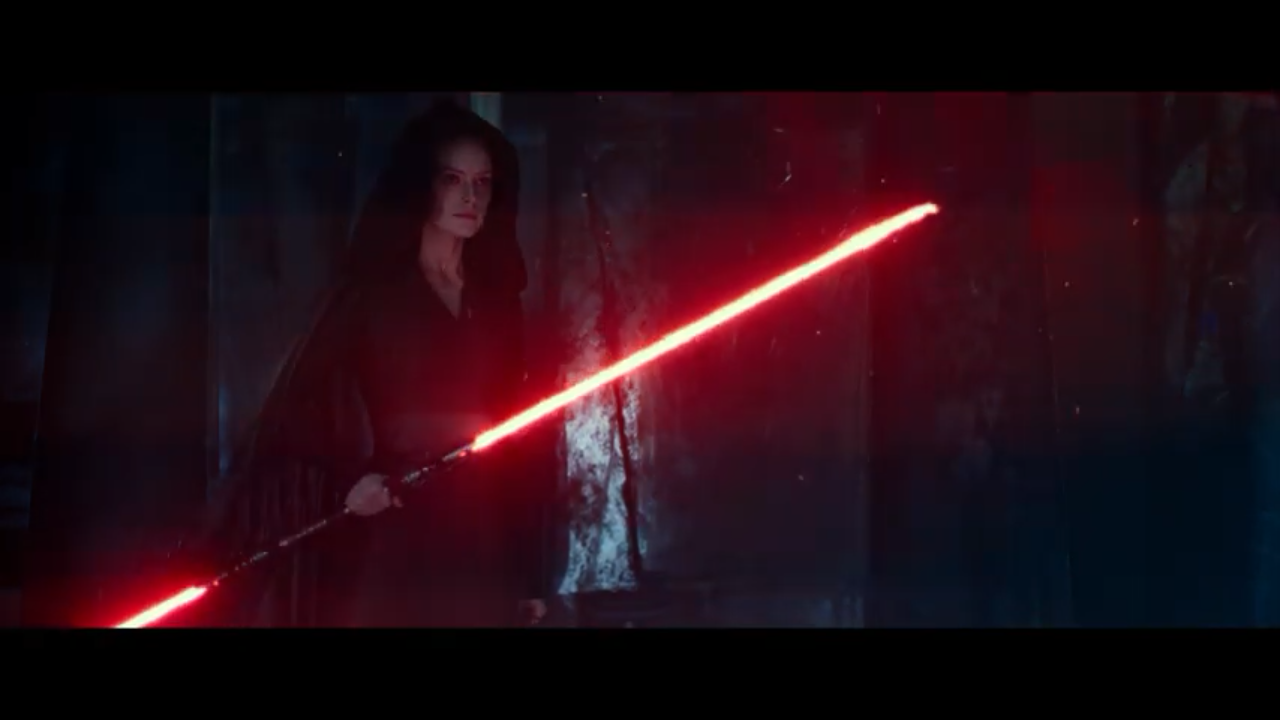 The clip ends with the Star Wars: The Rise of Skywalker logo, and Rey’s theme is played using soft tones to close everything out.

The next footage we get will likely be a full trailer in October, and if they are following the trend they set with The Force Awakens, we should expect that at half-time during one of the Monday Night Football games on ESPN. We’ll keep you posted as we hear more on that, but until then, happy speculating and may the Force be with us all! 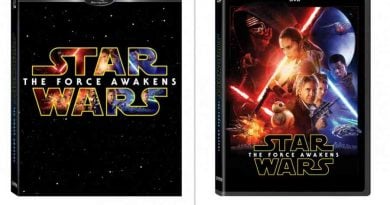 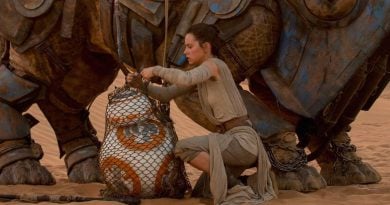 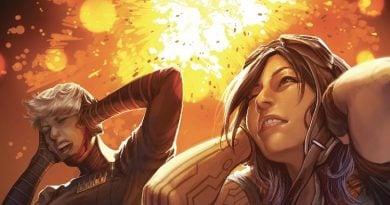