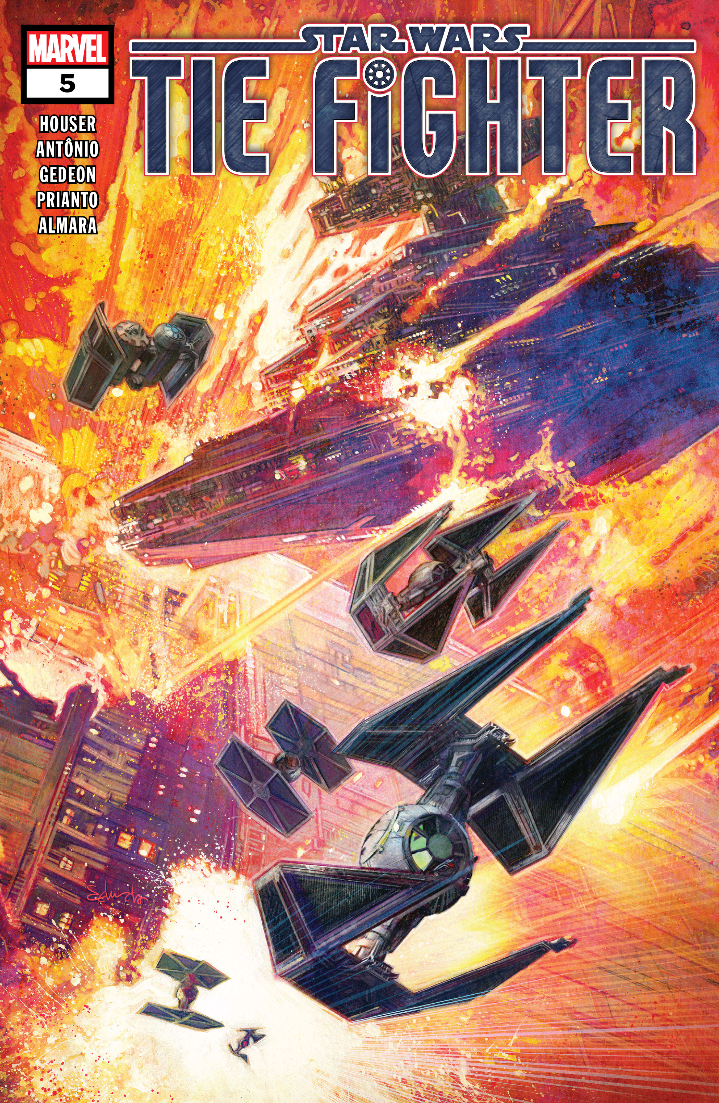 The final issue of Marvel’s TIE Fighter mini-series by writer Jody Houser hit the comic racks this week, but while it delivers a satisfying conclusion to the series itself, I’m left scratching my head due to the expectations I had for the comic going in. Read on for my full review where I’ll briefly discuss the finale and breakdown what worked and didn’t work about the so-called “crossover event” between Marvel and Del Rey. 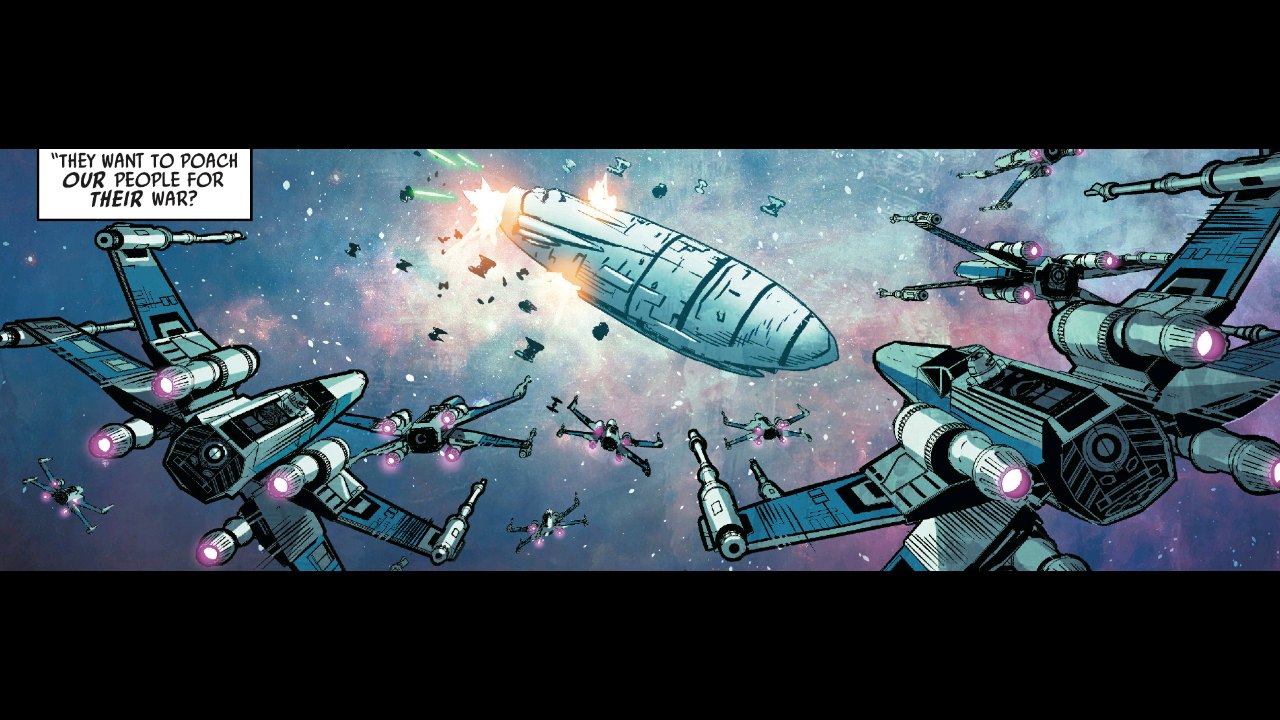 Over the four issues we’ve read so far, we’ve seen our team of imperial protagonists enjoy victory and suffer devastating loss. Having lost two of their own, Squadron Five of Shadow Wing has been forced to fill out their roster with a couple of green recruits for the upcoming final showdown. 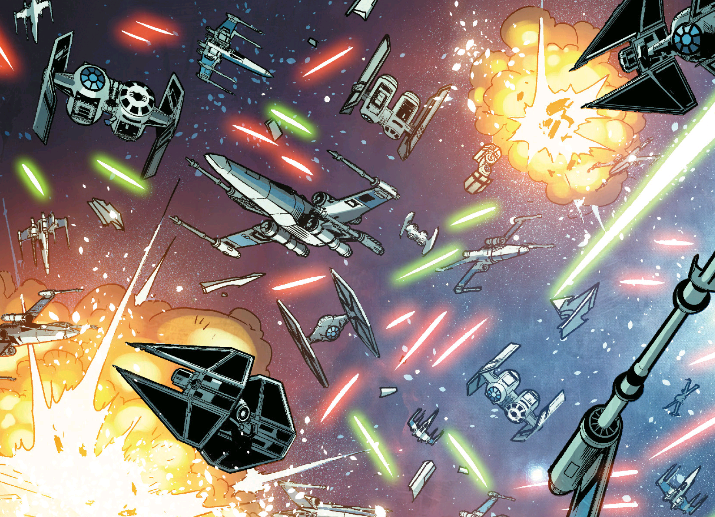 Having discovered the location of the mobile rebel base responsible for poaching the Empire for defectors, Shadow Wing is on the way to put an end to the Rebellion once and for all. The battle is quick and decisive, and surprisingly, a little one-sided on behalf of Shadow Wing. One TIE bomber is lost when one of the new recruits makes an error in judgment, but other than that, the attack is pulled off without a hitch as the team comes together in their final moment of triumph.

Unfortunately, their victory celebration is cut short when an announcement is made concerning the destruction of the second Death Star. In an instant, the morale of the imperials falls from an all-time high to a crushing new low. However, their patriotism remains, and through Teso Broosh’s leadership, they vow to continue the fight against the Rebels, despite the sudden turning of the galactic tables. 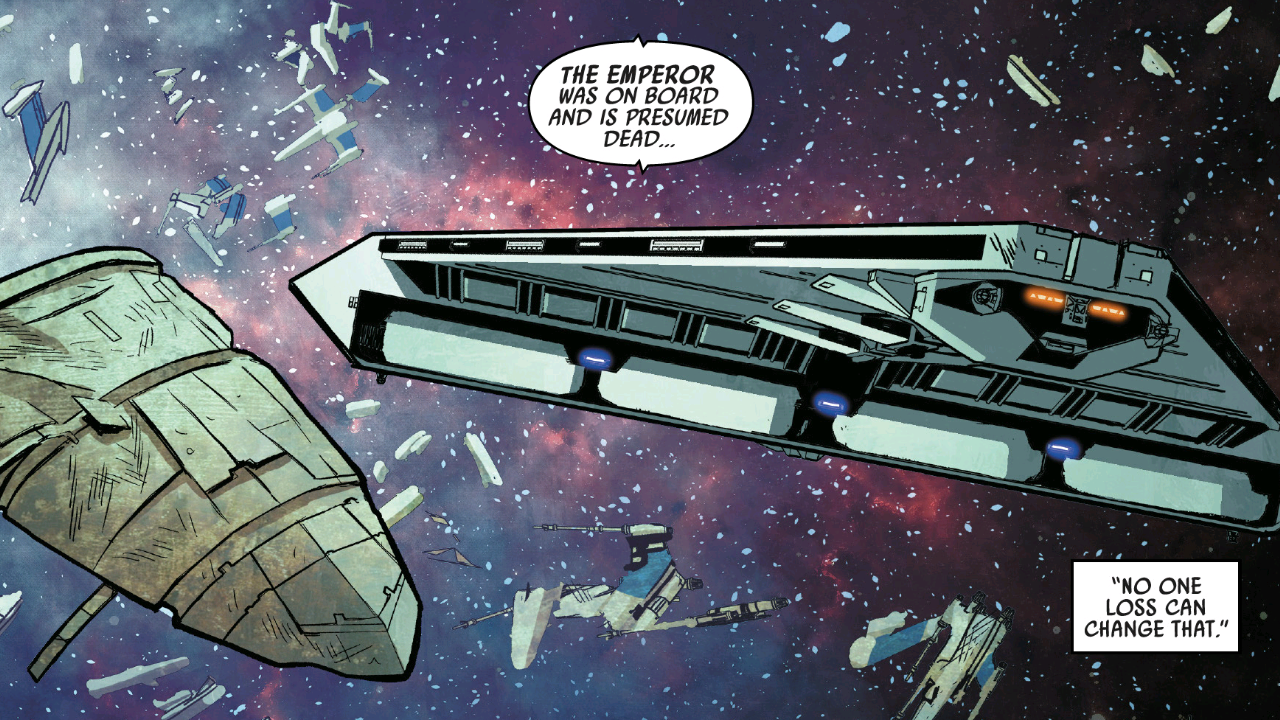 For the most part, I have enjoyed this series, and as a lover of all things Empire related in Star Wars, I especially enjoyed the way that Houser presented this story through the eyes of an imperial TIE Fighter squadron. She went to great lengths to humanize them and to make them worthy protagonists in a universe that typically would depict them as the villains of the story. 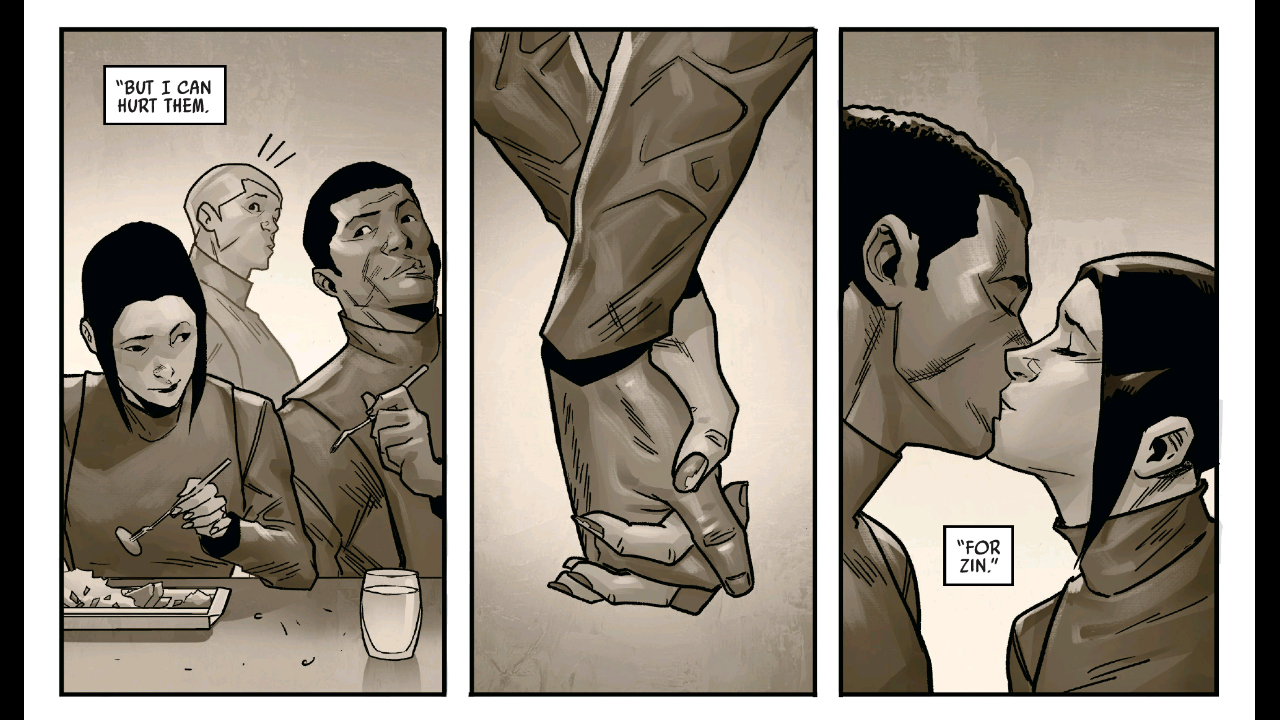 There is a really nice moment at the end of this issue between the squadron leader, Teso Broosh, and hot-shot pilot, Jeela Brebtin, that finally peeled back the shell for a moment on Jeela. Jeela has been, for the most part, an unreadable, by-the-book, no-nonsense kind of soldier, so getting to see a little vulnerability from her was quite nice. The only downside to this is that it left me wanting to see more from her as I felt we had barely scratched the surface of the character. 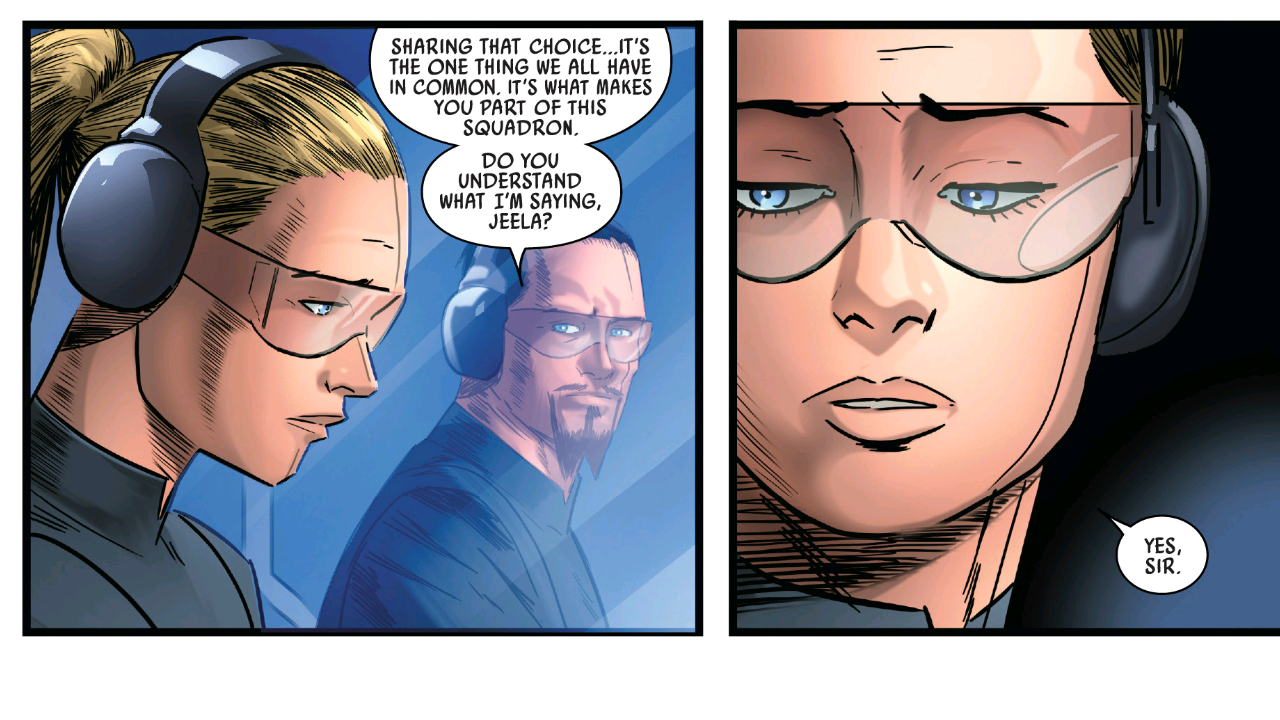 That being said, I guess it’s a good thing that we likely haven’t seen the last of Shadow Wing. The ambiguous “The End?” on the final page of the issue and the all-but-confirming comments about the squadron in the book’s afterward definitely points to some more stories with these characters in the future. Perhaps they will make their way into Alexander Freed’s next Alphabet Squadron novel or another comic series in the future. Time will tell, but I’d definitely be down for some more stories with these characters. 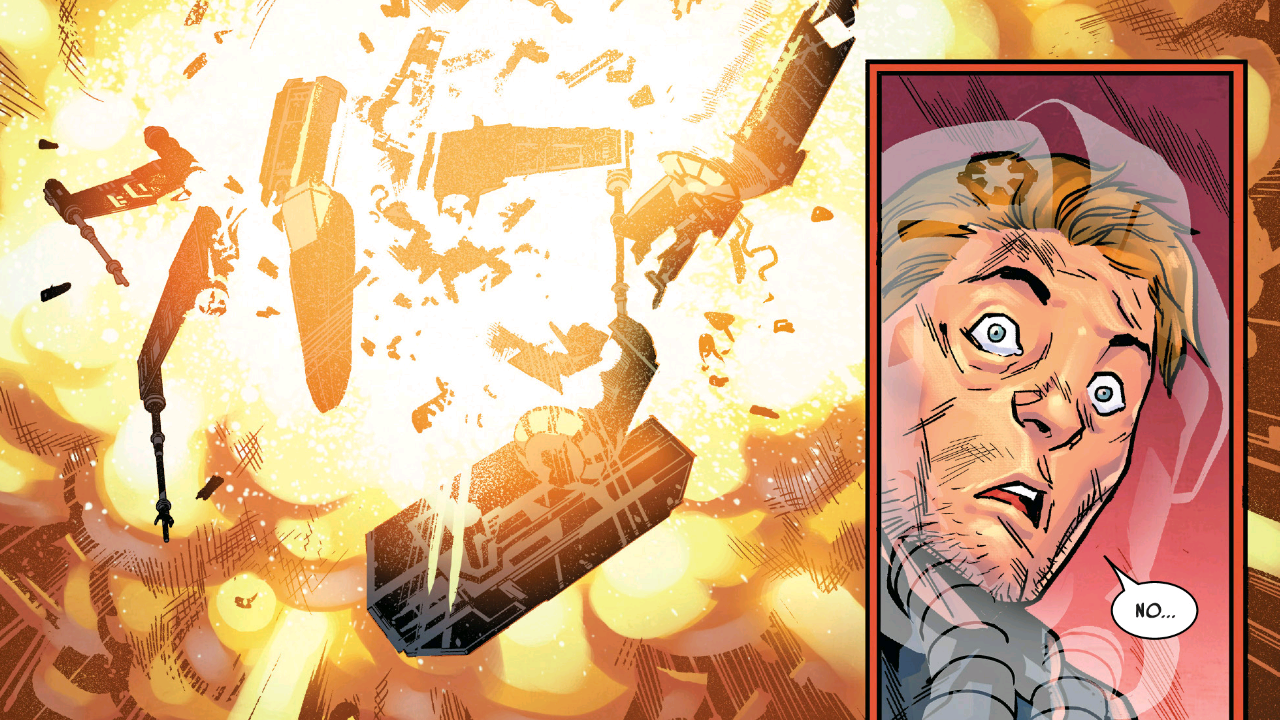 The only negative I have regarding this series may not really be Houser’s fault. The story in this mini-series is good and the characterization is well done. My only real complaint is in the way that this series was promoted via marketing. Along with Freed’s Alphabet Squadron, this five-issue mini-series was supposed to be a part of some “crossover event”, an event that, well, er…never actually happened. 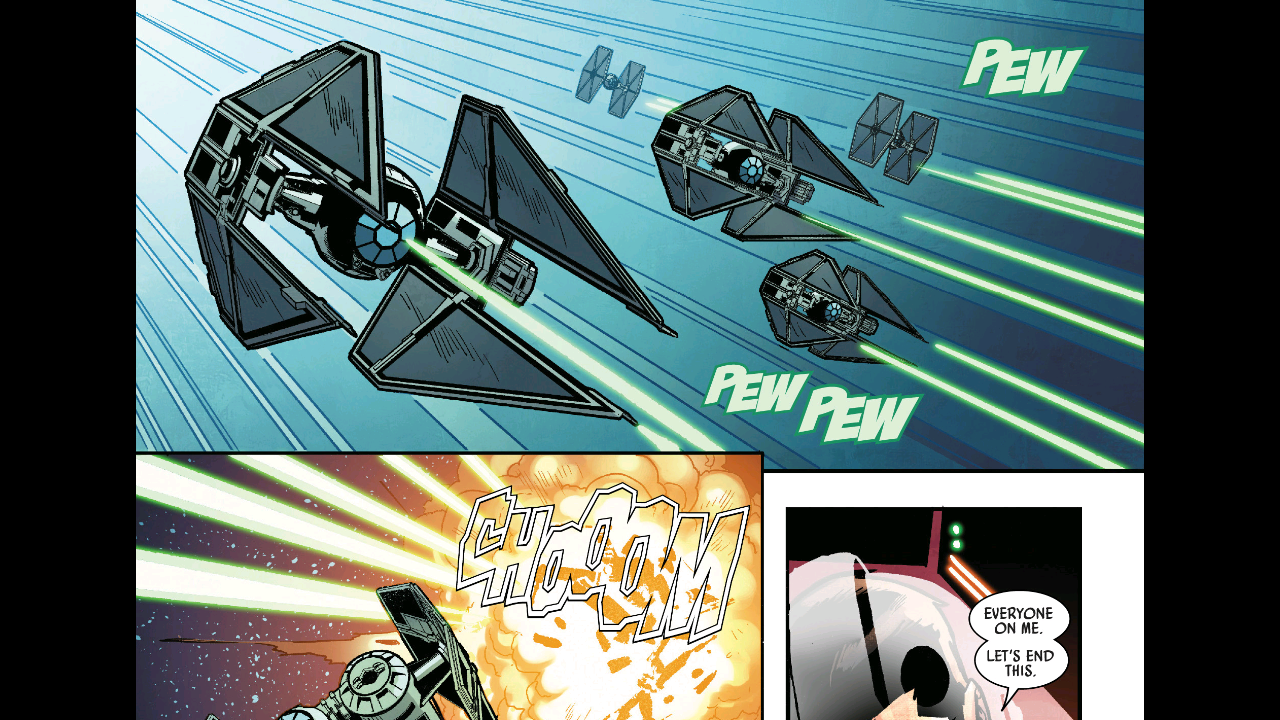 I mean, sure, “Shadow Wing” was integral to the plot of Alphabet Squadron (though not these particular pilots), and a couple of characters from that book had some brief cameos in the comic series, but other than that, there was nothing that really crossed over between the two. On the timeline, the TIE Fighter comic serves as a prequel to the novel, but the stories don’t intertwine at all and none of the characters from the comic appear in the novel. I guess I’m just used to crossovers in comics being a little more connected. 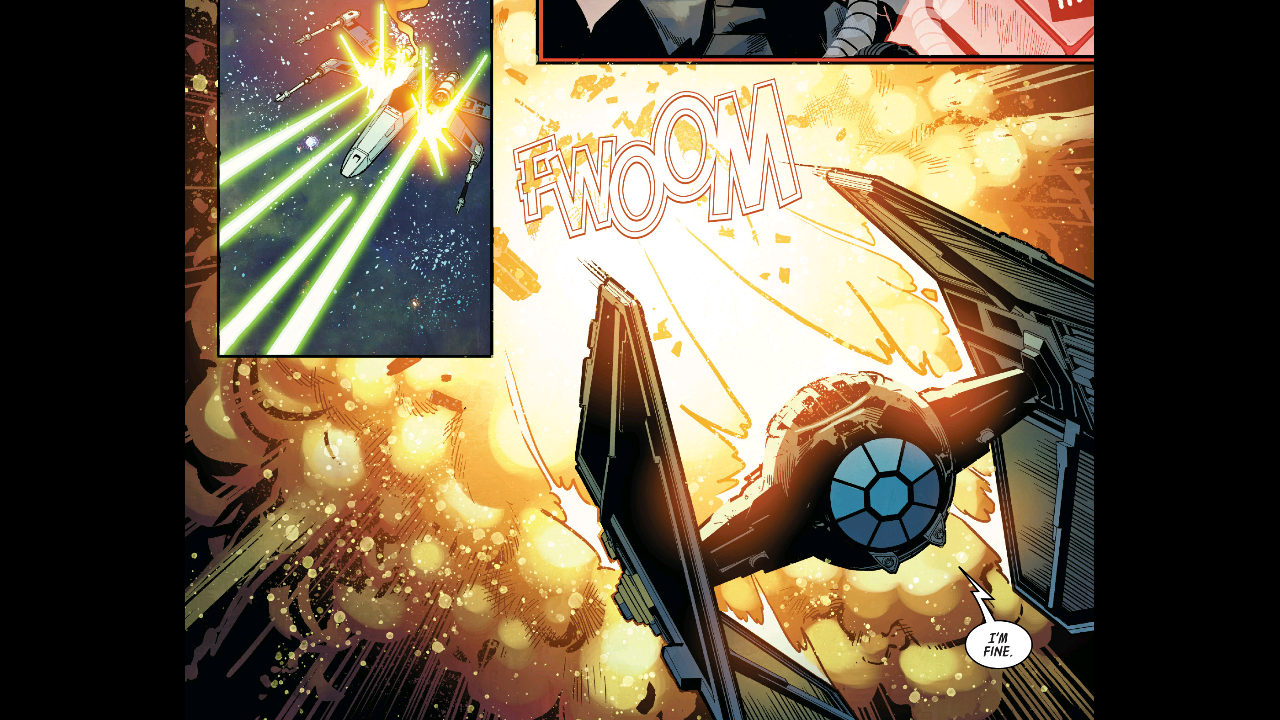 Typically, a crossover event requires one to read all the issues in each title throughout the course of the event to get the complete story (i.e. Star Wars: Vader Down). Sure, not every issue in a crossover event is always a must-read as they usually have their core issues and some tie-ins, but each of these two stories, the comic mini-series and the novel, can be read completely apart from one another and the reader won’t have missed a thing. I’m tempted to give this a pass on the fact that we’re dealing with two different mediums here, but I just can’t get past the fact that they advertised these two stories as a “crossover event” when by my estimation, they delivered no such thing. 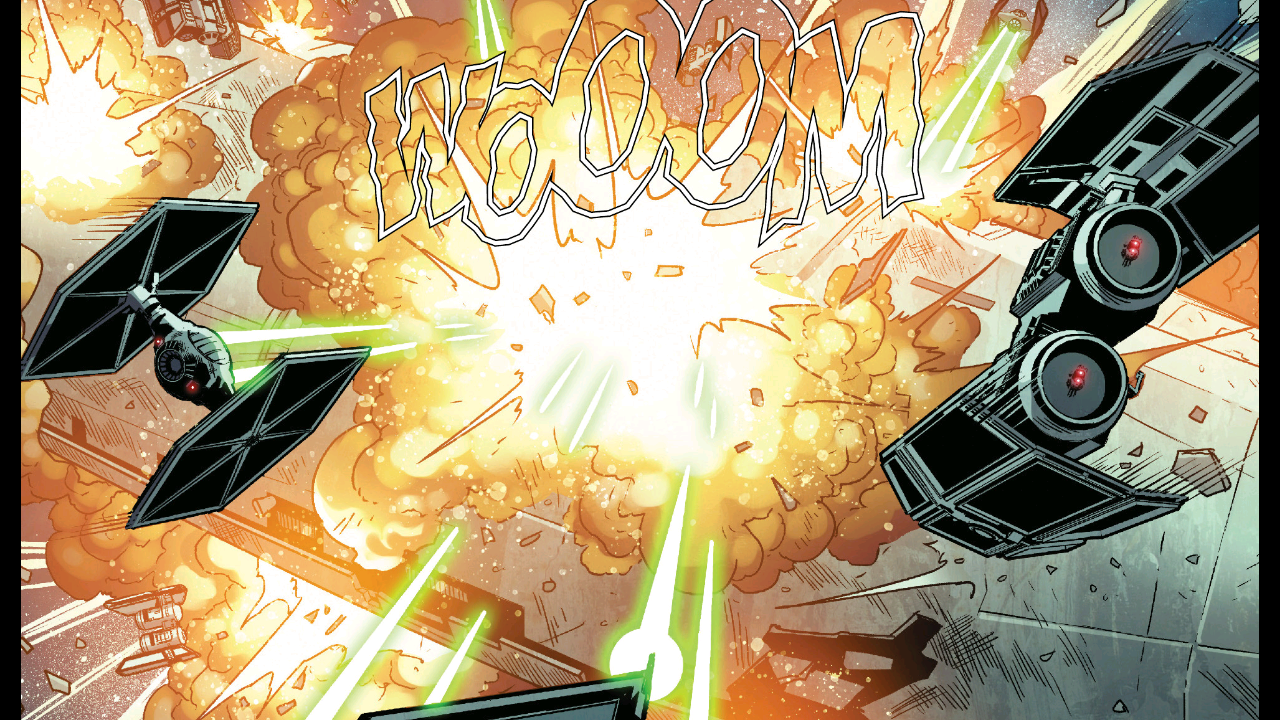 I still recommend this series if you haven’t read it yet, but just don’t go in expecting it to be some part of something big. Granted, future stories with these characters may be a little more connected, but for now, that’s not what it is. Here’s to hoping we get something more akin to the epic Shadows of the Empire multimedia event of the mid-90’s. As a 90’s kid, this was a huge part of my introduction to Star Wars and I think that we need something like it for the next generation of fans. But for now, we content ourselves with what we have and try to enjoy it for what it is.

Star Wars: TIE Fighter is available now in a comic shop near you or online at Comixology. Happy reading Star Wars comic fans! 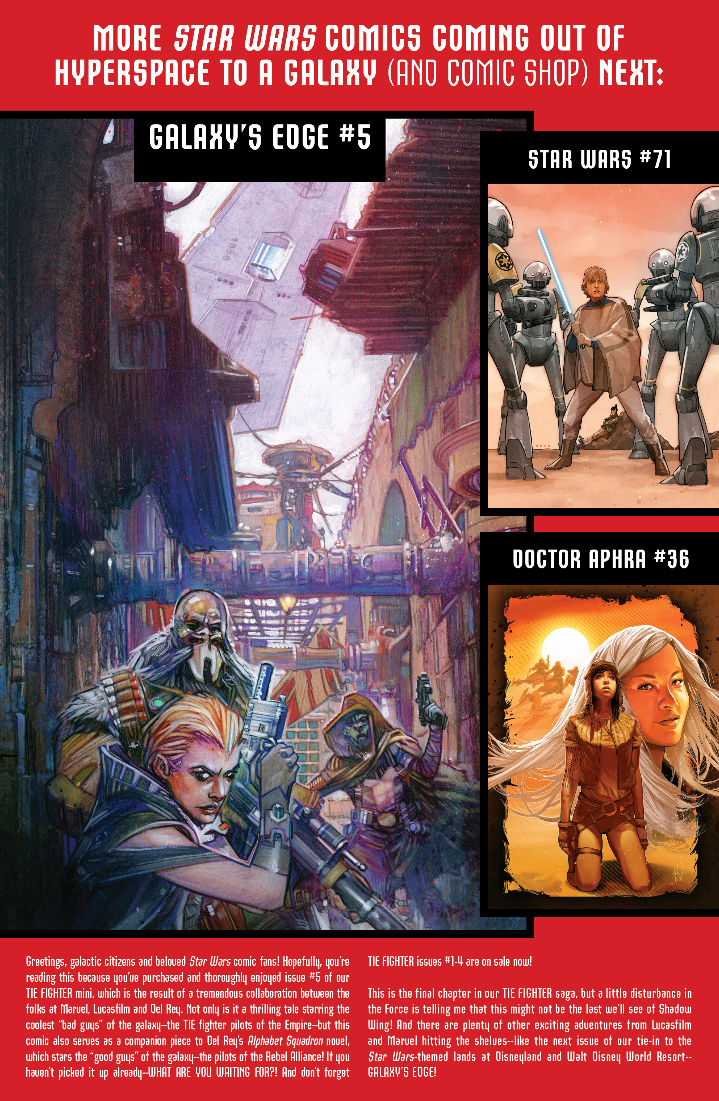