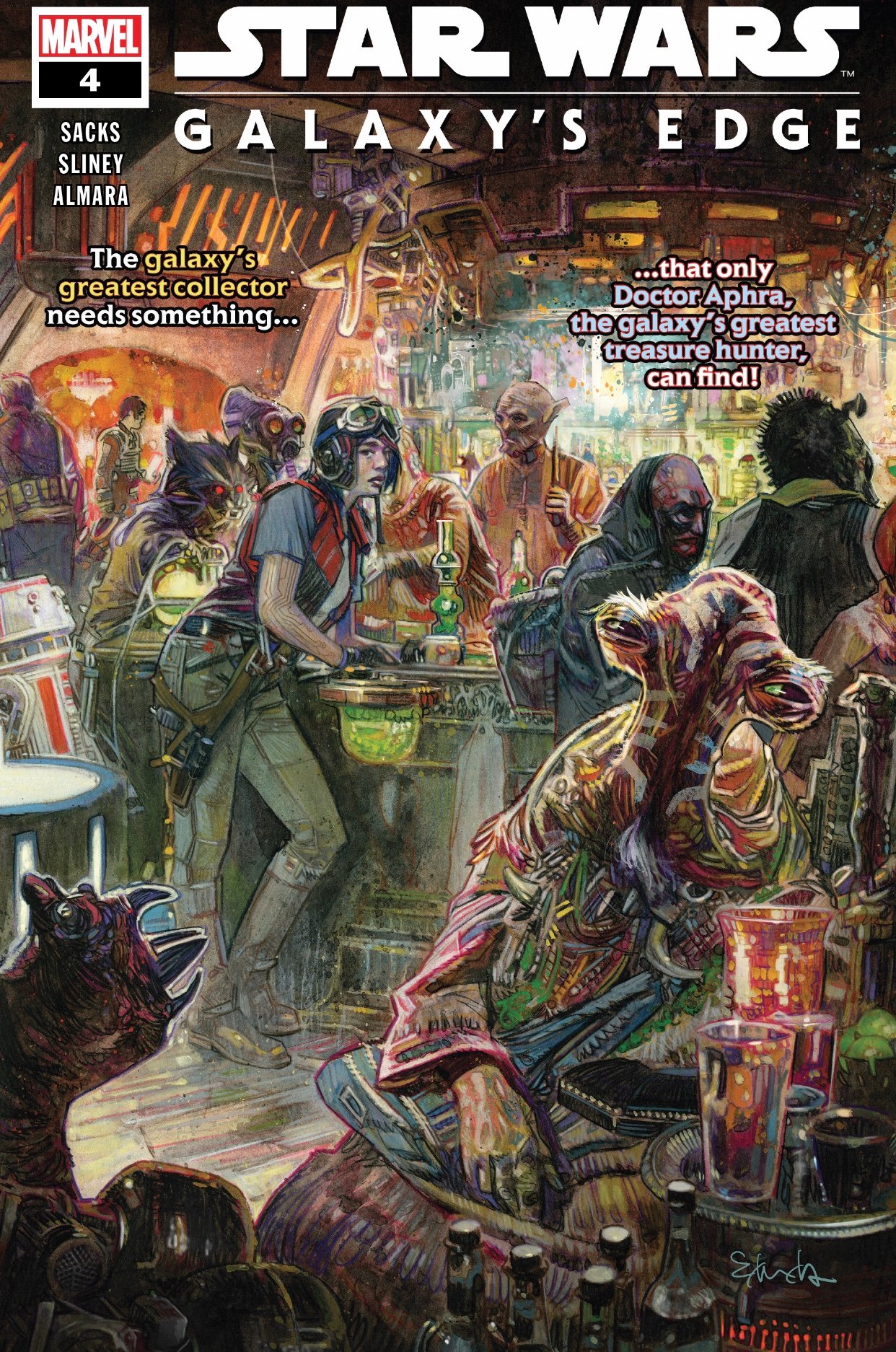 This fourth issue of Galaxy’s Edge continues the hunt for an elusive artifact that’s revealed to be a Sith sword. Like all the pieces in Dok-Ondar’s Den of Antiquities, there’s a story behind not only the artifact itself, but how it came to be in his possession. Somehow, I’m not at all surprised the archaeologist who helped the collector acquire it is none other than Doctor Aphra. For a single-issue, this has a lot of implications for the canonical lore of the Sith going forward, as well as incorporating a few Legends aspects, which should make many fans happy. Buckle up as we head back to Batuu…and Moraband. SPOILERS AHEAD…. 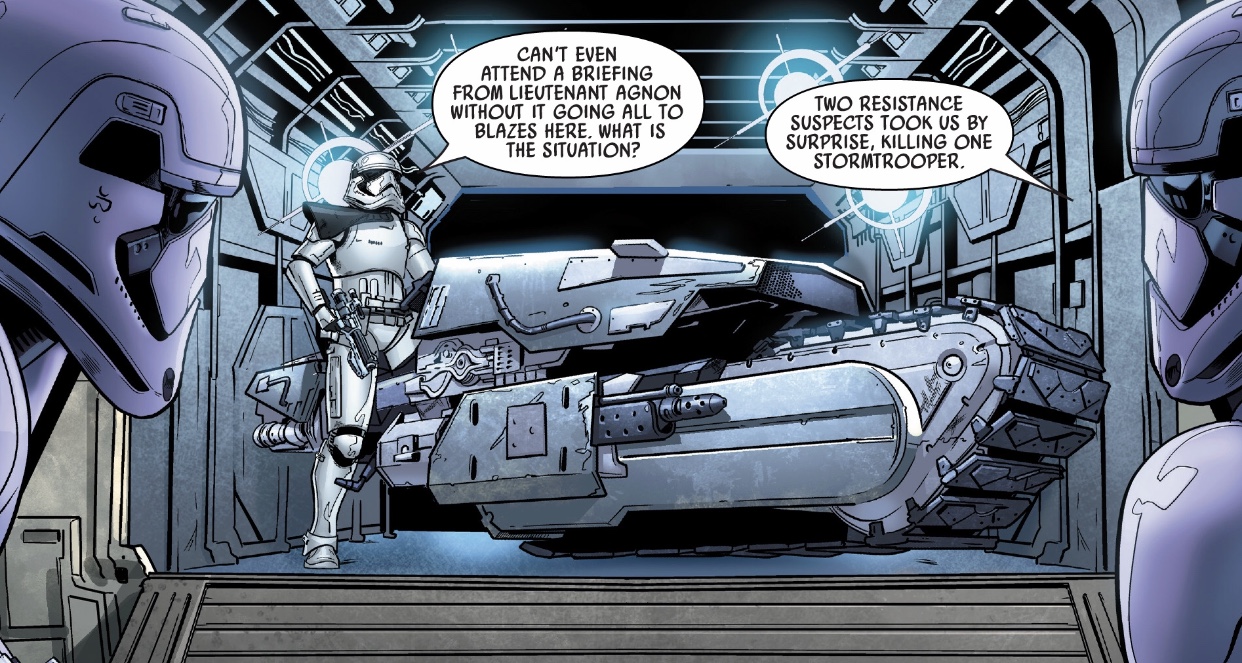 The First Order troops on Batuu have called for additional support as they track down to suspected Resistance operatives. In case you haven’t been following along, the Resistance are heavily rumored to be hiding out somewhere on Batuu, so the First Order continue to build up a counter presence on the distant planet. When we meet them here they are dealing with two particularly hostile suspects causing trouble for these bucket heads. A firefight ensues and the troopers easily dispose of the suspected freedom fighters, leading their commander to conclude they weren’t Resistance because it shouldn’t have been so easy. Suddenly, they get word of our smugglers in Black Spire Outpost, who have been labeled fugitives and ordered to death by General Hux himself, so they head back to the settlement. As they’re leaving, a genuine Resistance fighter is revealed to have been watching the fight, suggesting the two suspects were actually Resistance soldiers who sacrificed themselves to throw the First Order off. I suspect we may finally get a glimpse of what the Resistance is up to on Batuu before this series concludes. 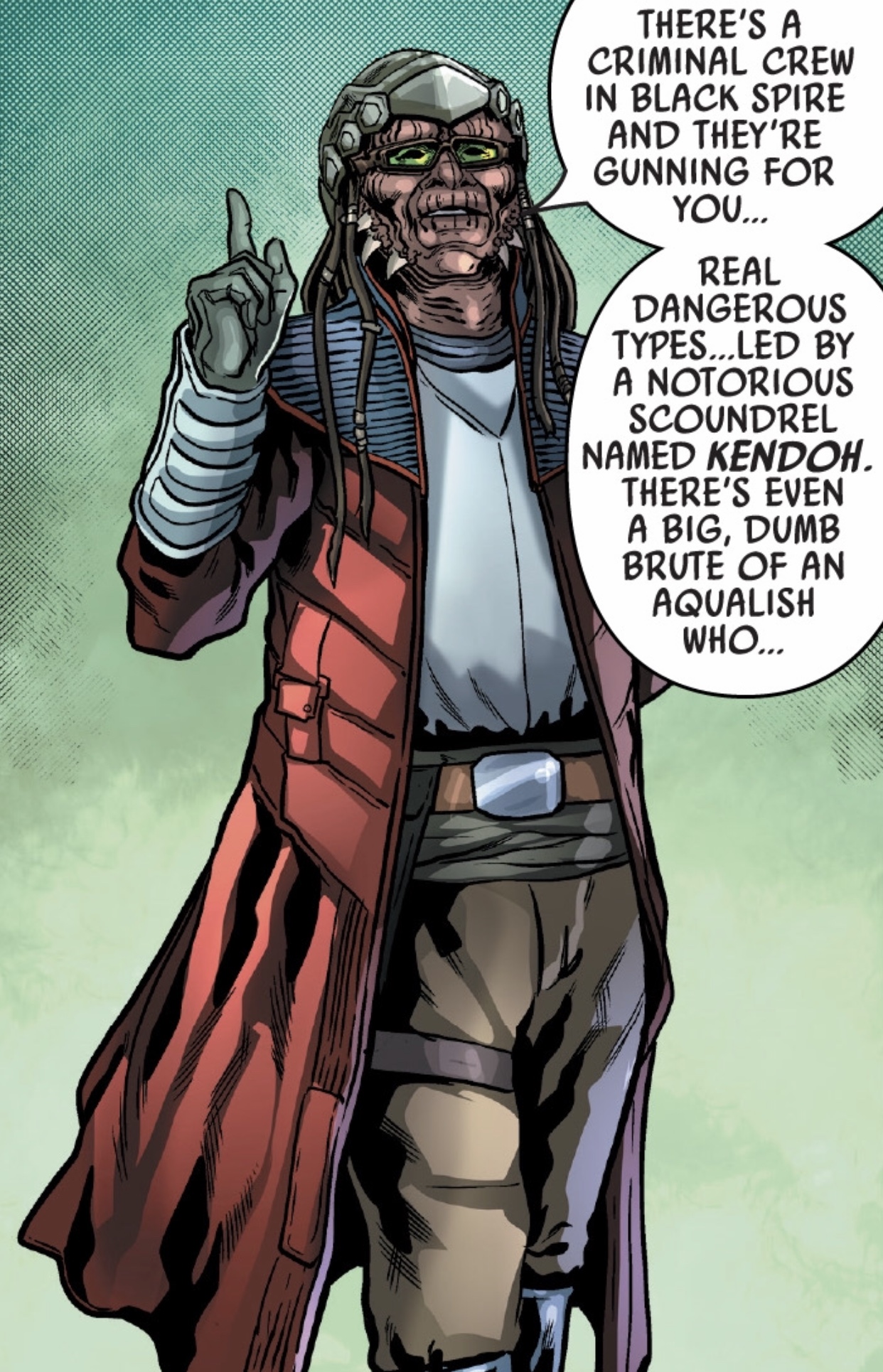 By now, we know Hondo Ohnaka is quite a presence on Batuu and Black Spire Outpost. He approaches Dok as the Ithorian mourns a statue honoring his late parents, in an attempt to get the antiquities dealer to speak more of the mysterious Sith sword, the Sword of Khasyun, the smugglers have acquired. They have the blade but they need the hilt to unlock whatever power Dok-Ondar is so frightened of, noting their mystery buyer will accept nothing less than the complete artifact. 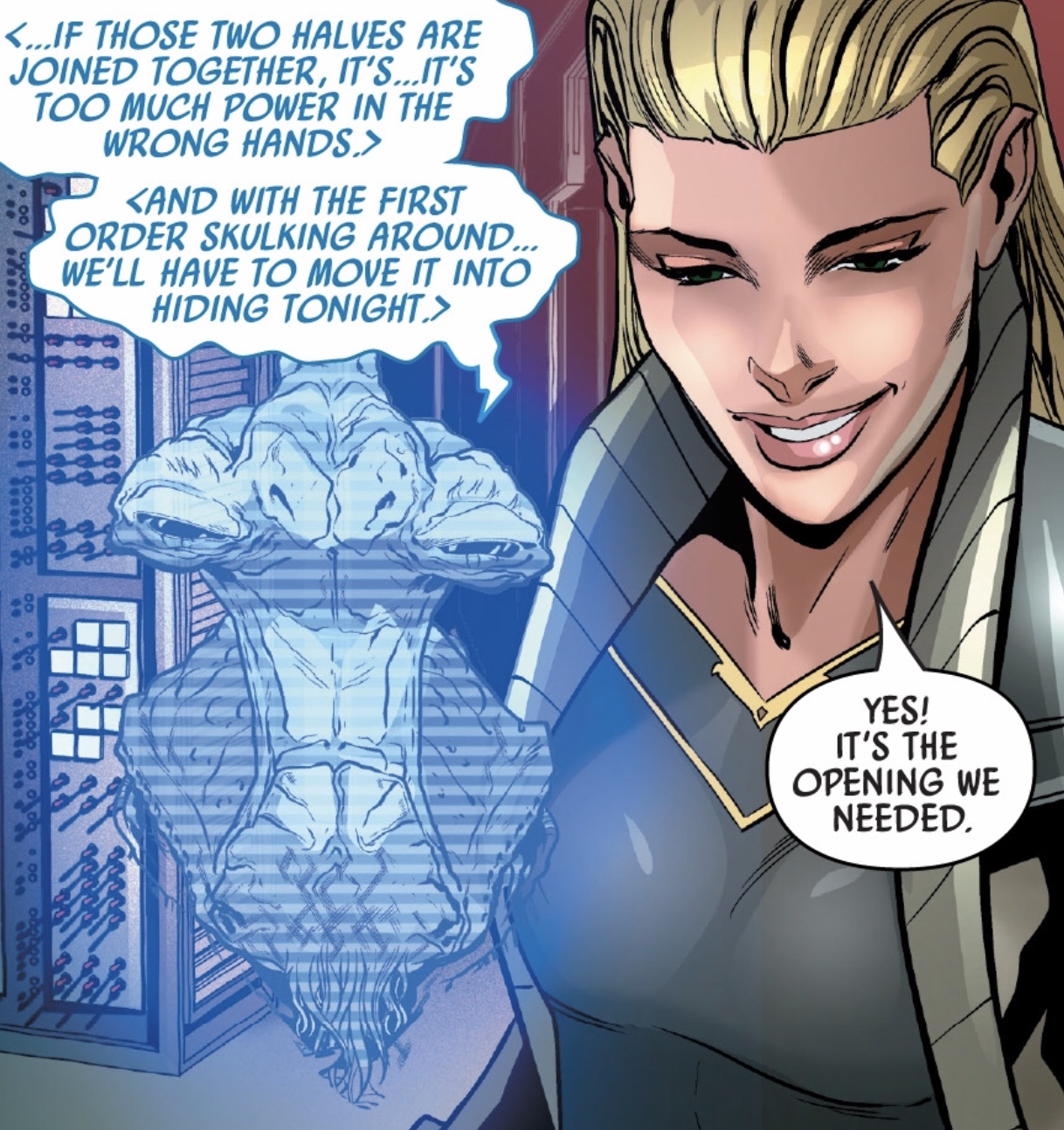 Our group of smugglers listen in, trying to glean whatever information they can about the Sword of Khasyun. Kendoh doesn’t seem the least bit dissuaded by Dok-Ondar’s extreme sense of caution around the Sword of Khasyun, whereas Remex seems to be nervous about what they may be unleashing. Dok-Ondar is only concerned about keeping this artifact away from the First Order, knowing full well the consequence of its dark powers, whatever they may be used for. All Kendoh and the others are concerned about is how they can get their hands on the other half, so when they learn Dok is going to transport it into hiding, they go into heist planning mode. They cut off the transmission and start planning, but Remex removes himself from the orchestrations to listen to what else Hondo and Dok are talking about, hoping to learn more about the Sith weapon. Hondo wants to know how Dok-Ondar acquired the weapon, as well as what happened with the archaeologist who assisted in its procurement. 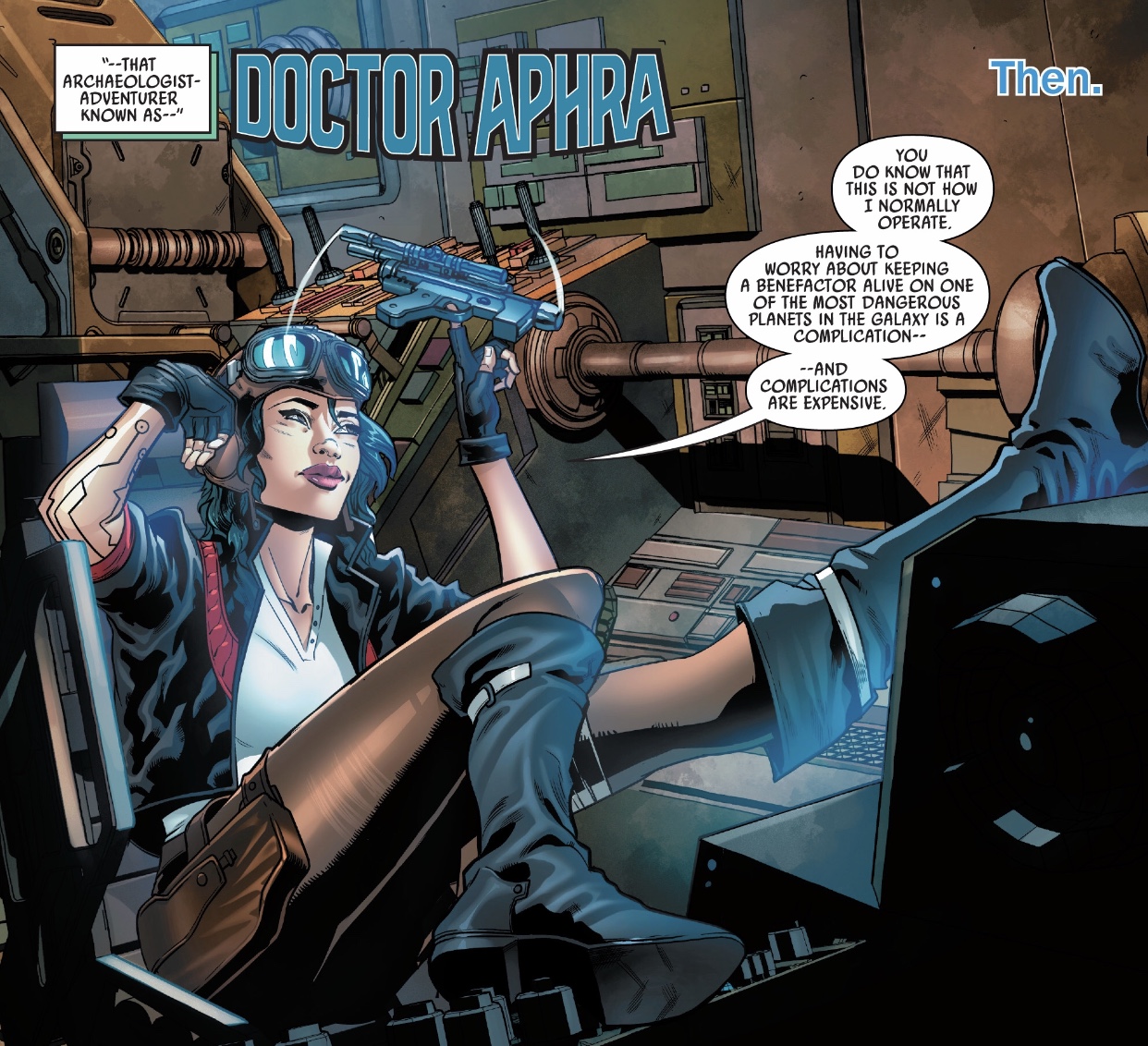 You know me…I love Doctor Aphra, so I’m thrilled they gave her a grand, Indiana Jones-like entrance to this series. We flashback thirty-years, to a meeting between Dok and Aphra to discuss how they will get the Sword of Khasyun. Aphra shares some history about the sword, which I’m going to directly quote because I think we all need to brush up on Sith lore leading up to December.

“Legend has it that it was forged by a sect of Dowutin Sith warriors who believed lightsabers were for the weak. They believed that only a truly worthy warrior would the strength to wield it. Legend also has it that the sword is cursed…and caused those Sith to betray and kill each other…”

Dowutin are an especially large species (remember Grummgar from Maz’s Castle), so it suggests the species formed their own sect of the Sith Order. Aphra studied the myth around the Sword of Khasyun at the esteemed University of Bar’leth, who had a map to the artifact she stole. Dok-Ondars parents also studied the artifact but he doesn’t get into specifics of why they did. More and more writer Ethan Sacks suggests Ondars parents were heavily connected to the mystique of the Force, between his travels to the Kyber Temple and where he heads in this issue gives him quite a well-rounded knowledge of both light and dark. It’s a fascinating backstory to add to this character, especially since he will surely cement himself in the minds of fans who travel to the Disney parks to meet him in the flesh. 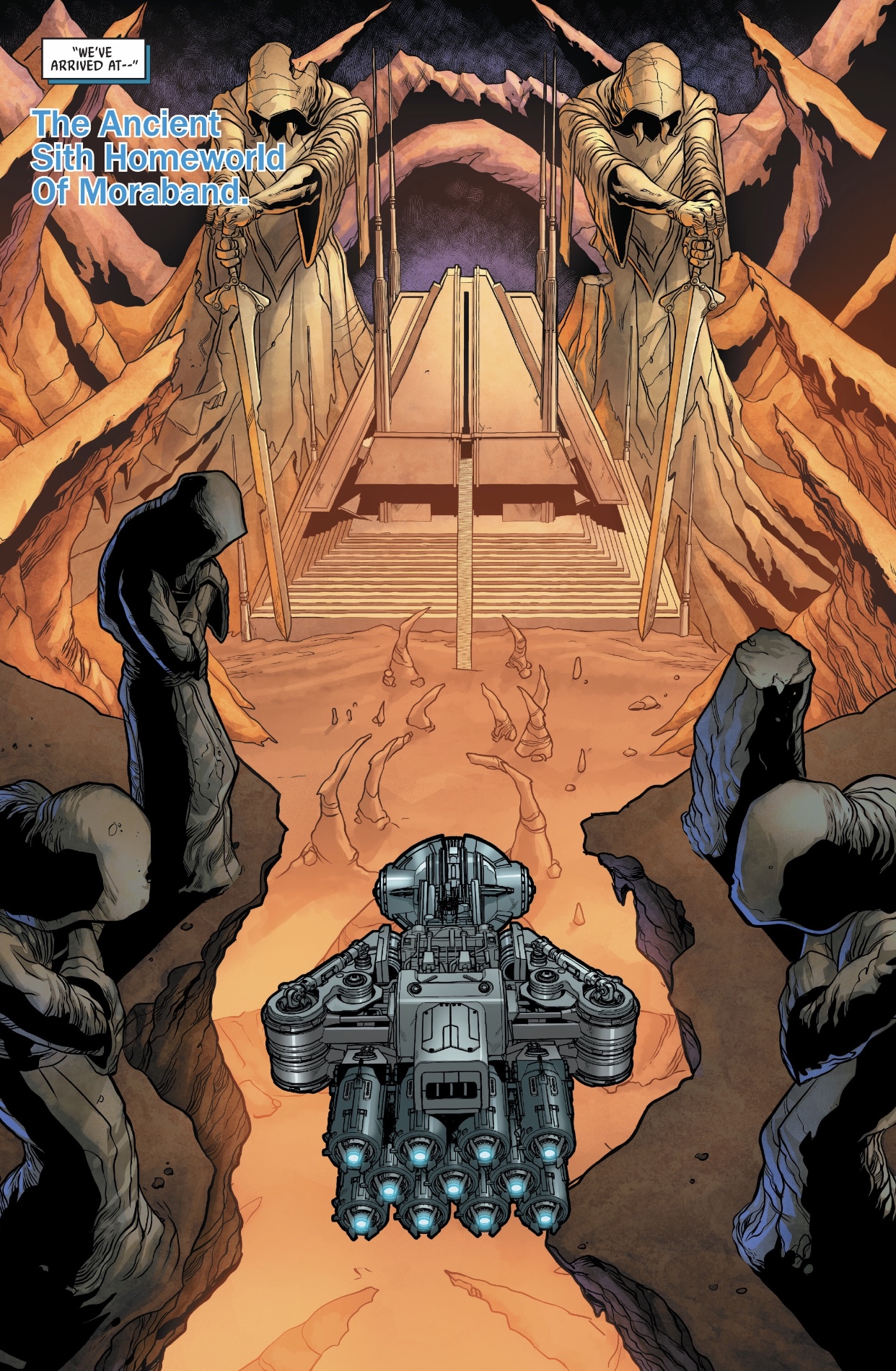 Well, hello there, Moraband. Just look at that frame. Many compliments to the art of Will Sliney and colorist Dono Sánchez-Almara for their work in this issue. It’s so great to see this world appear here in detail. If you’re a canon junkie, this issue is required reading, if only for the art. Aphra, Dok, Triple Zero, BeeTee, and the hired muscle of two Shistavaneans disembark into the Sith site, with Aphra warning them of the traps set by the Sith to stop intruders. Again, this really felt like an homage to Indiana Jones and I feel like one of the many roles Aphra plays is that of swashbuckling explorer. She’s got a unique knowledge of the galaxy’s mythology, so I’m happy to see this being expanded upon here in Galaxy’s Edge. 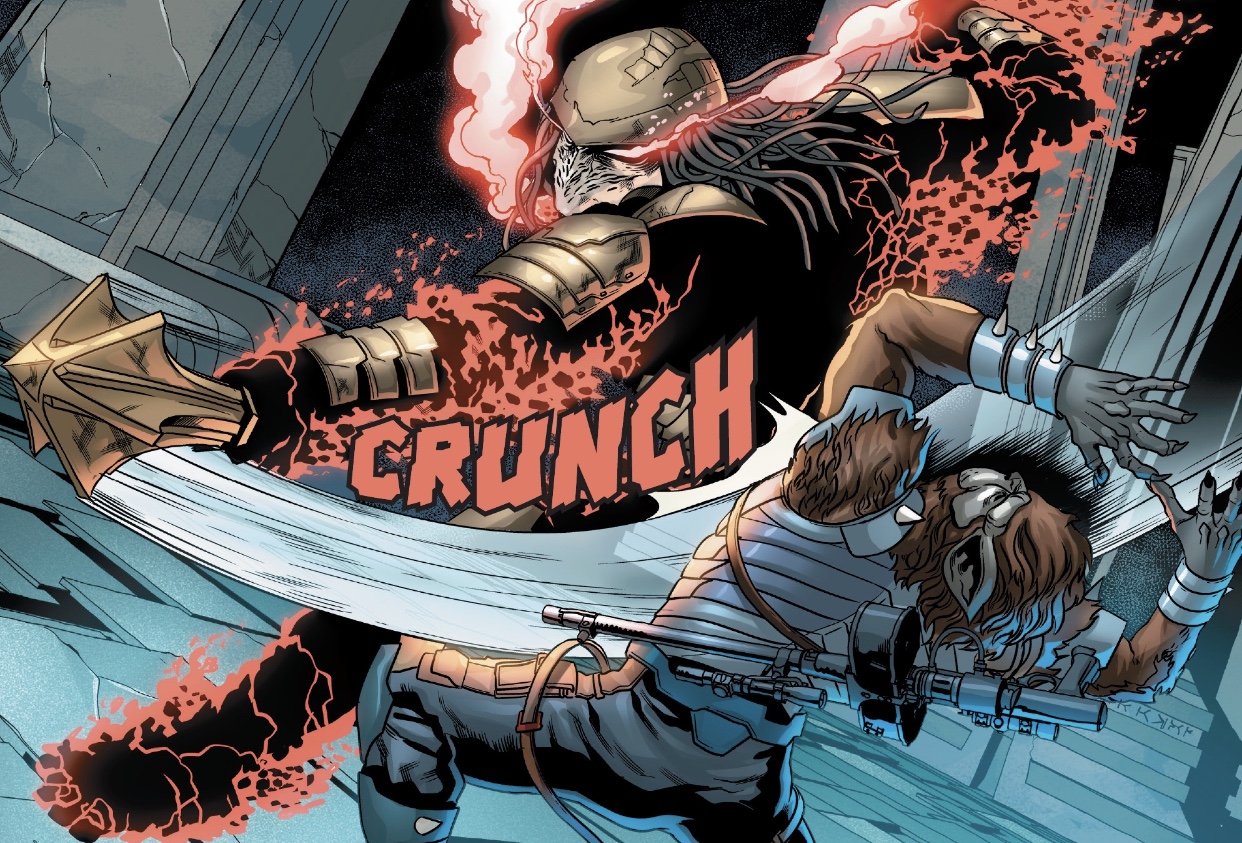 It doesn’t take long for the Sith Temple to unleash its booby traps, beginning with a Sith sentinel, similar to the appearance of Darth Bane in The Clone Wars. While the Bane comparison may be the first place your mind goes its worth stating this may be the first canonical appearance of the ancient Sith species. In Legends content, the Sith species were an ancient race of aliens who reigned over the early days of the Dark Lord hierarchy in the Sith Empire on Korriban. They were powerful in the Force but ultimately faded from existence due to the infighting between the Dark Lords. It’s not confirmed that’s what we’re seeing, but facial tendrils are a distinct physical attribute of the Sith species, which this sentinel shares. This would be a pretty big deal if the Sith species were brought into canon, especially if an Old Republic series of films is on the horizon. Again, nothing confirmed but we should keep our eyes on this. While Ondar’s muscle can’t deal with the sentinel, Aphra quickly dispatches of it with a thermal detonator, which consequently kills one of the Shistavanean working for Dok. They press on, but Aphra confides in BeeTee that she’s planning on betraying Ondar to take the sword for herself. 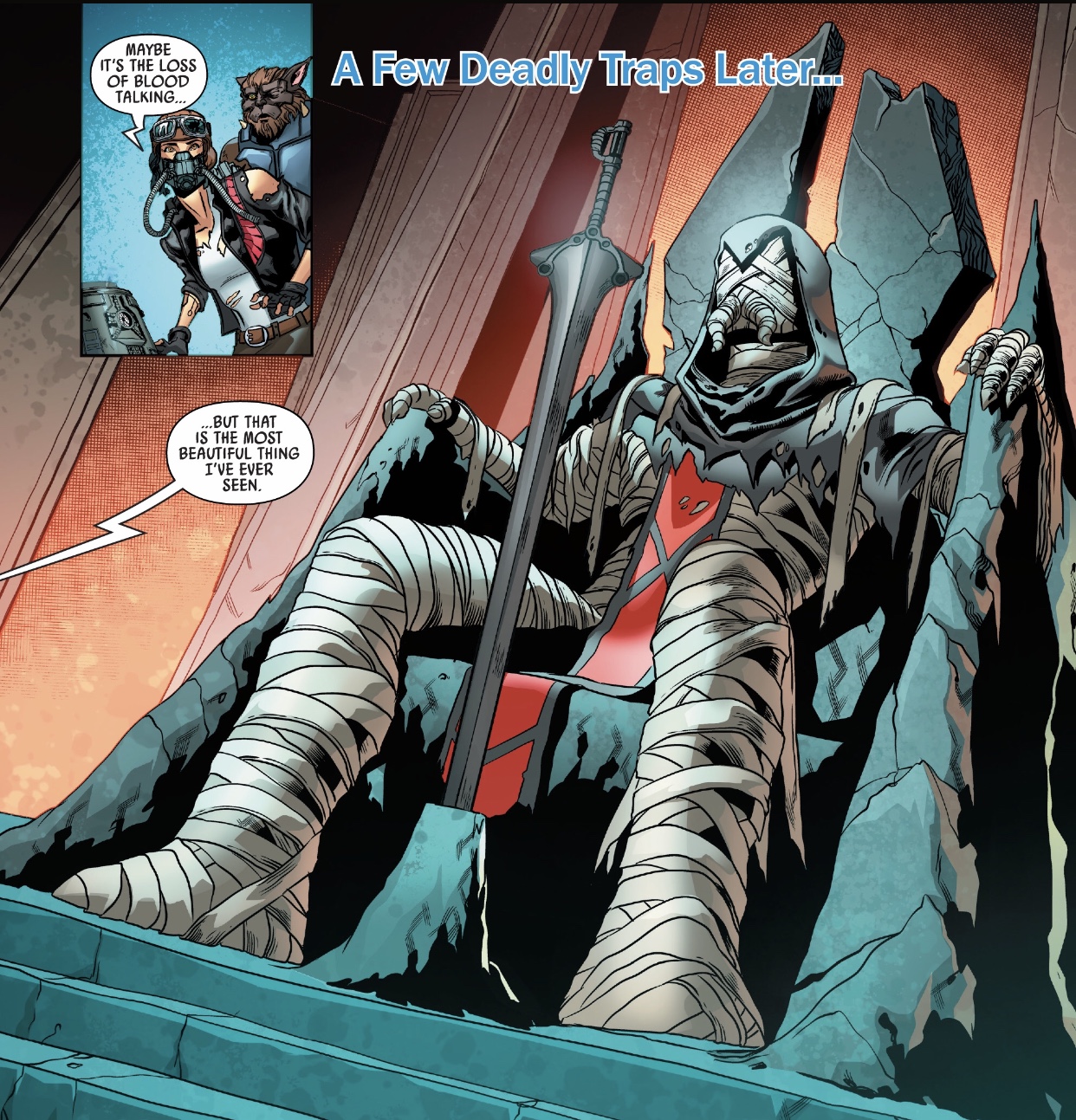 Behold, the Sword of Khasyun in a very Arthurian display. This is pretty cool to see and should give us a lot of hope the Story Group and storytellers are most likely cooking up something special for us in the future concerning the Sith and Jedi wars. Aphra and the remaining Shistavanean retrieve the Sword of Khasyun, which immediately triggers another trap: Sith hounds. Funnily enough, Aphra makes a bit of a meta comment: “How was I supposed to know the Sith hound wasn’t just a legend?!?”. As they retrieve the sword, Triple Zero plays out another part of Aphra’s devious plan and prepares to kill Dok-Ondar who is waiting on the ship at the edge of the temple’s entrance. 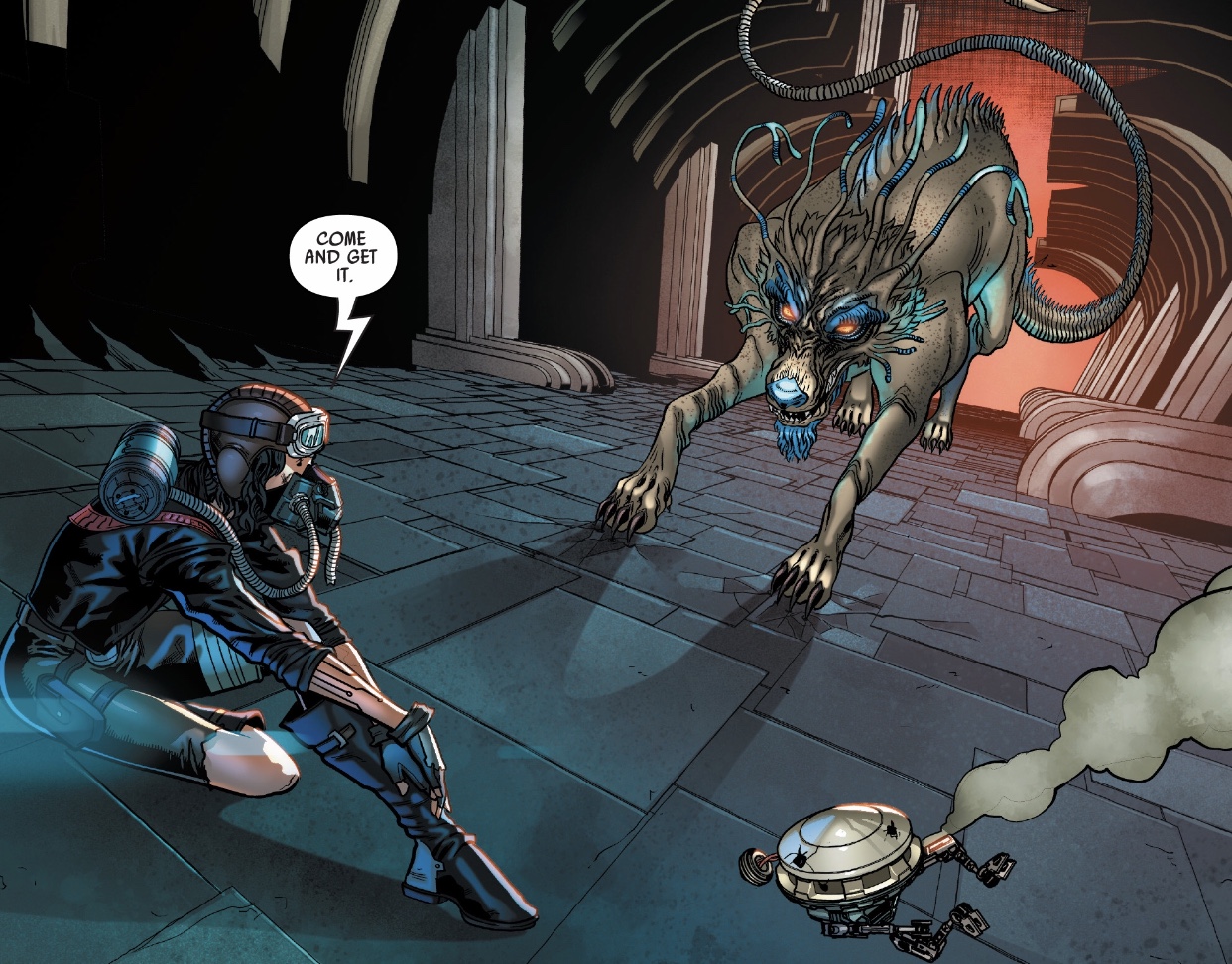 These once Legends creatures, actually called Tuk’ata, were brought into canon last year. They first appeared in Legends comics Tales of the Jedi but were made canon as mummified taxidermy in Dryden Vos’ collection, as well as mentioned in Cavan Scott’s recent audio drama, Dooku: Jedi Lost (make sure to checkout Jordan’s great review of that story here, there are HUGE canonical implications for Sith and Jedi contained within it). Aphra and the Shistavanean make a break for it, with the latter ultimately being caught by the beast, leaving Aphra to carry out the Sword of Khasyun. She survives by luring the hound into a hallway filled with automated blasters set to kill anything in motion. The booby trap is turned against the hound and Aphra survives. Once she makes her way out of the temple, she finds Dok and the presumed dead Shistavanean have beheaded the murderous Triple Zero and her double-cross failed. The story jumps back to present day Batuu, leaving Aphra’s fate unknown, for now. Dok is more concerned with moving the hilt of the Sword of Khasyun than reminiscing with Hondo, but he’s too late, as Kendoh and Wooro appear with the ironically beheaded head of Dok’s security droid, ready to take the hilt from Dok by force. 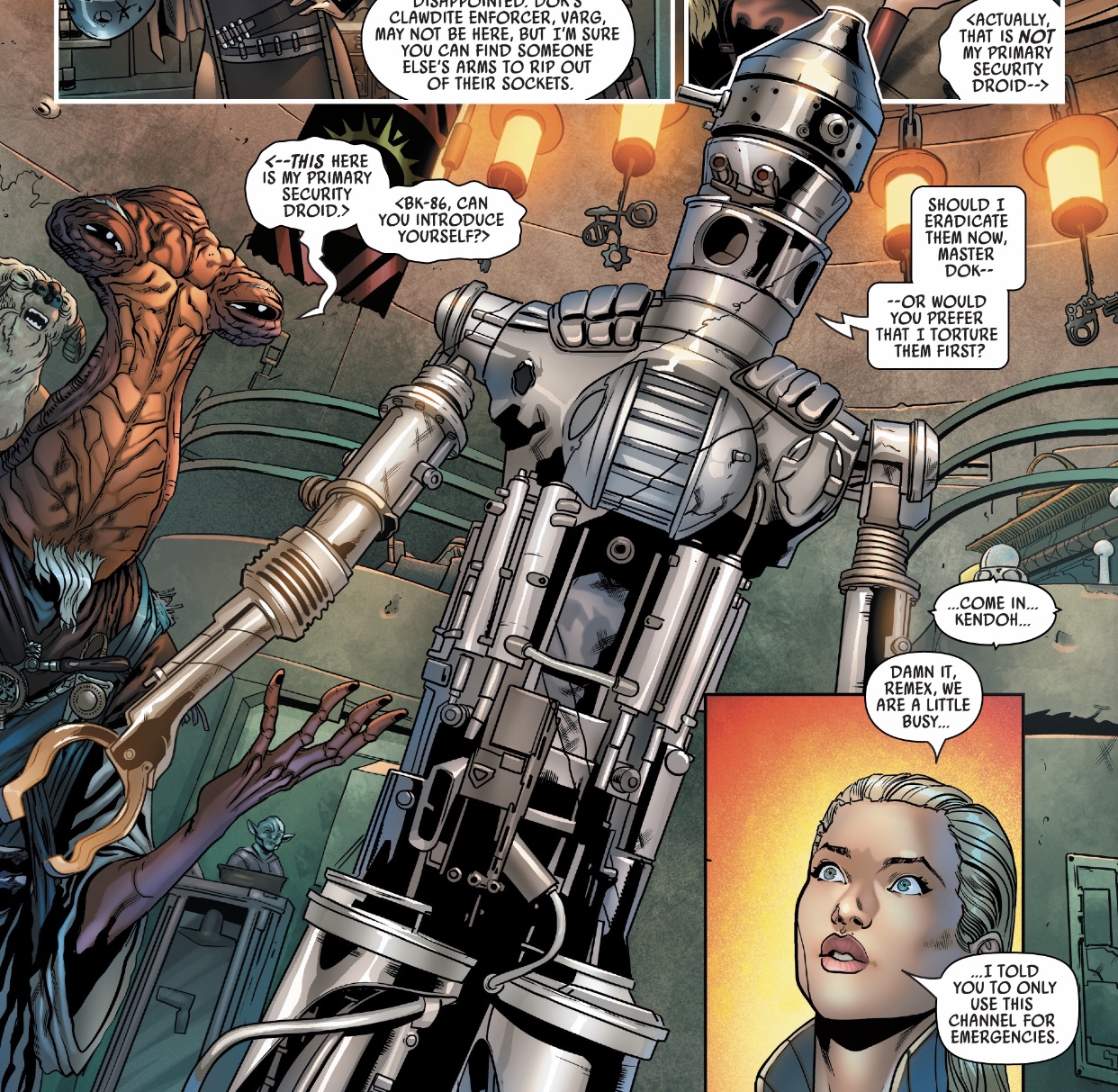 Well, Dok’s no stranger to the droid double-cross, so he has a contingency of his own prepared. Meet BK-86, who’s going to make it much more difficult for our smugglers to get their hands on the Sword of Khasyun. Not only do they have that to deal with, some other people have taken interest in their handiwork. 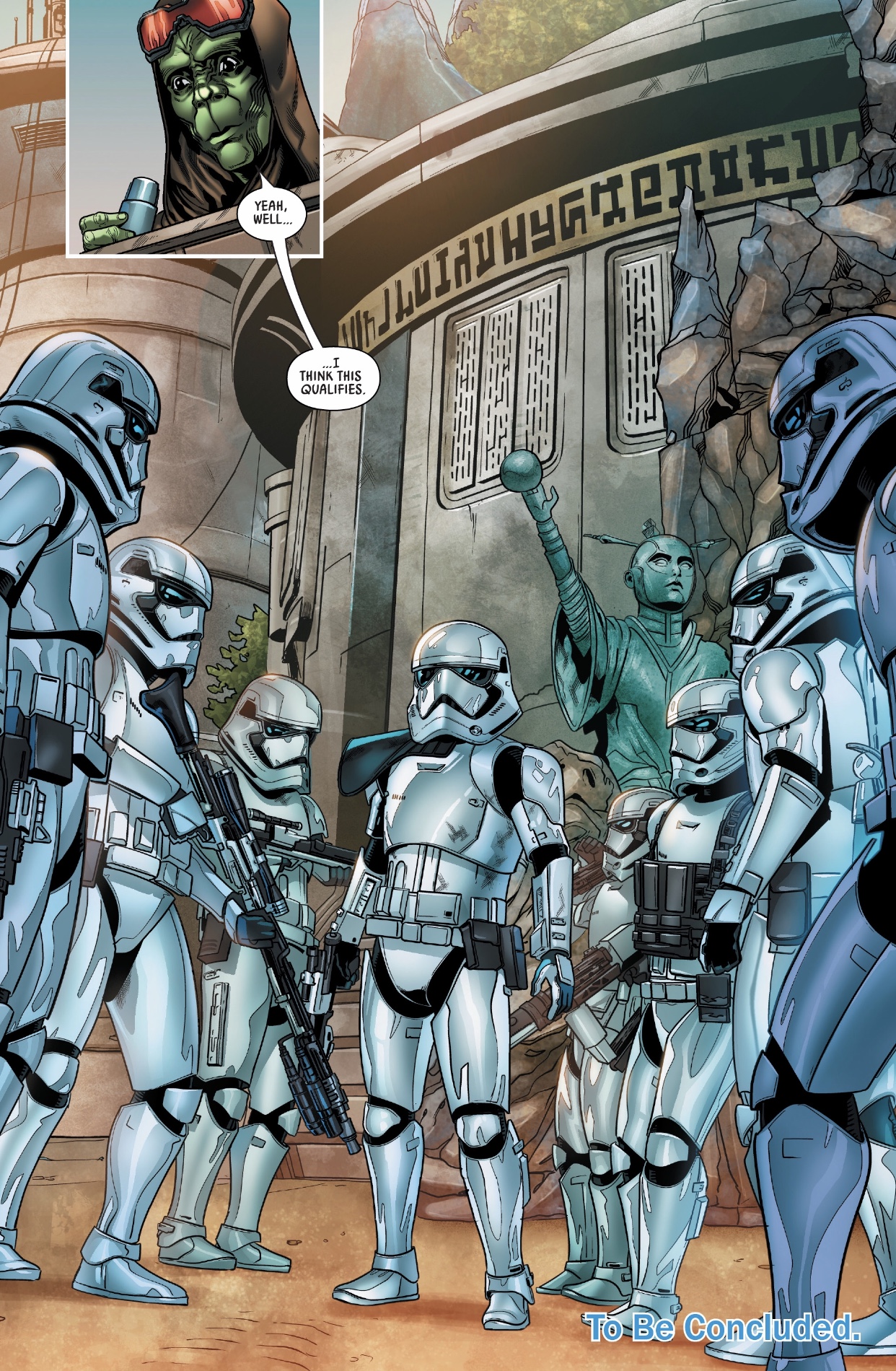 It looks like we have quite a showdown brewing in the heart of Black Spire Outpost. The conclusion of this series certainly won’t be a quiet one but I hope amidst the noise we get some explanation to the many mysteries still surrounding the Sword of Khasyun. And if I had to bet, this could be the moment the Resistance shows up to help prevent the First Order from taking this artifact.

Despite the onslaught of Galaxy’s Edge related material upon us, this series has done an excellent job of bringing in many eye-catching elements of the greater universe to drive a compelling story. Writer Ethan Sacks continues to deliver a series with everything I love about Star Wars. I have a lot of hope this will not only serve as an introduction for one of the park’s main attractions, but it will also serve as a preview for content we may be getting in the future. This is my favorite issue of Galaxy’s Edge so far and definitely think its worth your time. Legends content is still out there and it would be great to see some of it brought into canon, especially some of the elements of the ancient Sith and Jedi. I’ll be looking forward to the conclusion of this story, but sad to see it end. 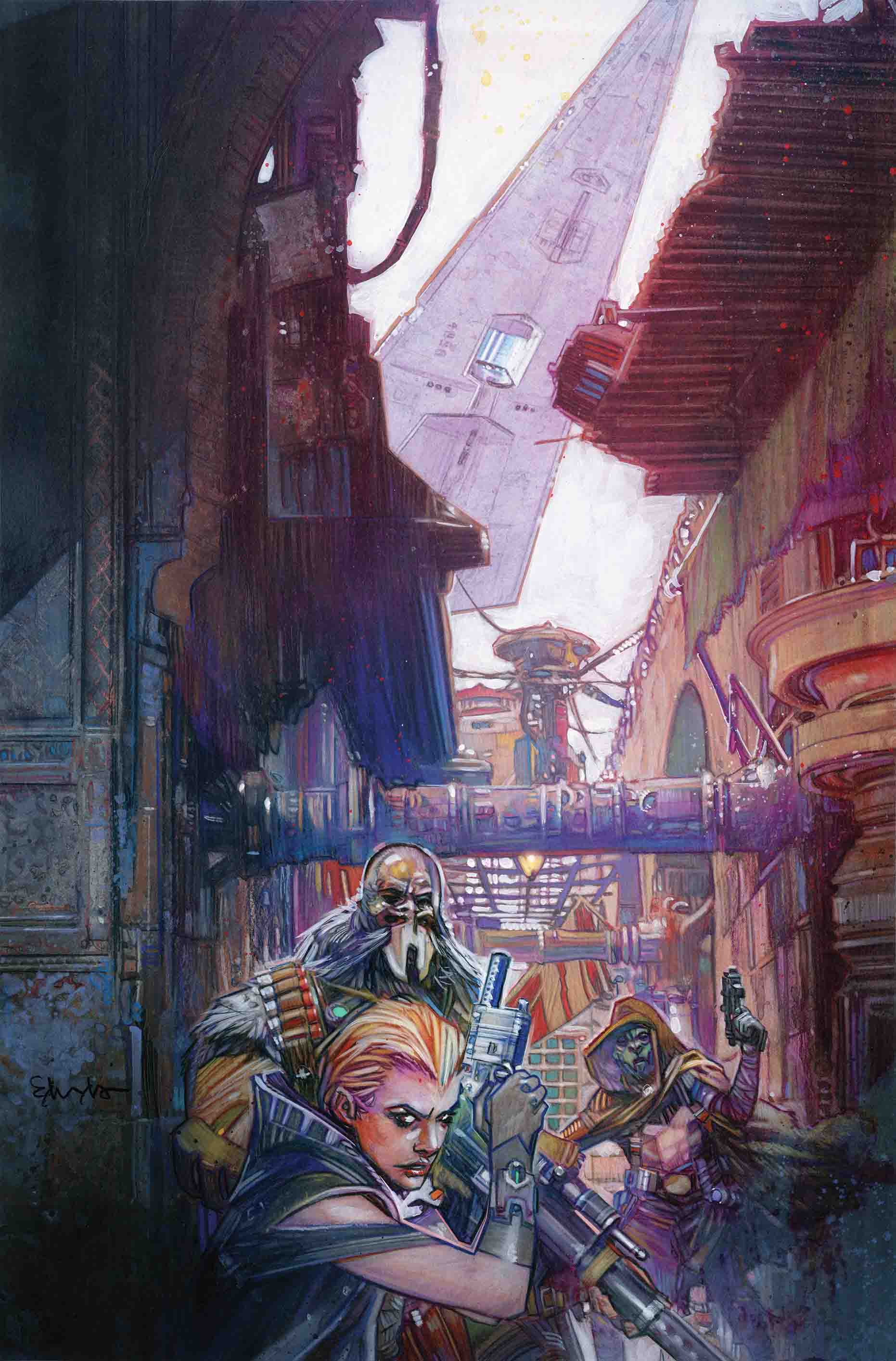