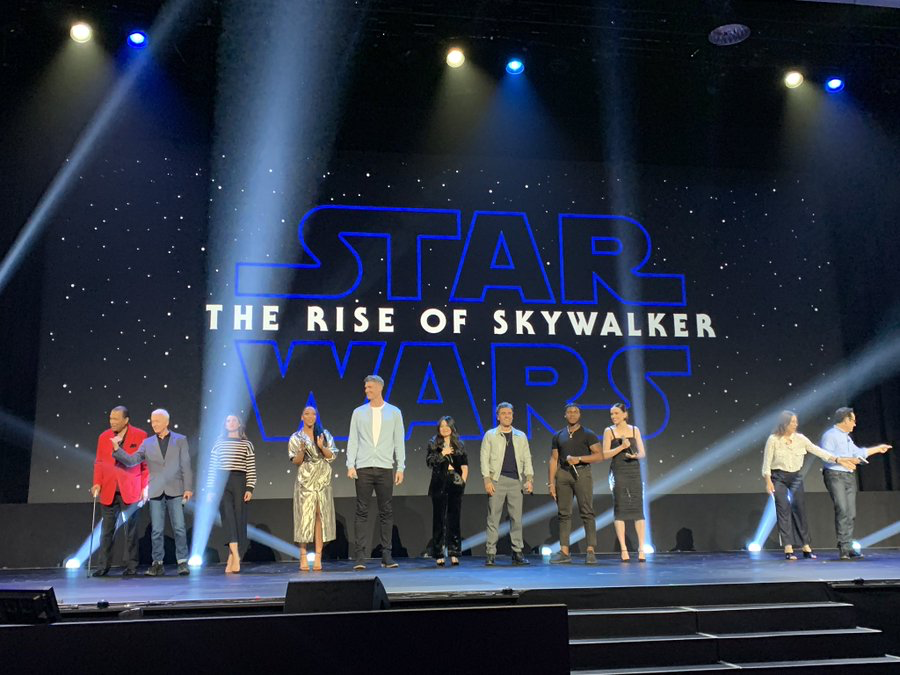 Welcome to our coverage of the big Disney movie slate panel at D23! For this article, we’ll be focused on all the Star Wars news that’s tied to The Rise of Skywalker, and possibly some other Star Wars movie news if any surprise announcements are made.

Like with last night’s Disney+ panel, Disney began discussing a number of topics throughout a two-plus-hour presentation. However, unlike the Disney+ panel, which saved the galaxy far, far away for last, the Star Wars news started very early on at 12:13 PM CST.

Check out the new poster for Star Wars: #TheRiseOfSkywalker that debuted at #D23Expo. See the film in theaters December 20. pic.twitter.com/FUSZaGQZE6

Clip showing montage of past Star Wars films, then shots of an army of ships, Rey & Kylo fighting over water, and ends with Rey in a hooded cloak and holding a red light saber that goes from two side by side savers to two long sabers if that makes sense LOL. #D23Expo @DisneyD23

Some AWESOME imagery, including a swarm of Star Destroyers ominiously in the sky shot from below. #D23Expo #StarWars

And just like that, the Star Wars: The Rise of Skywalker portion of the panel has finished. Stay tuned for potentially more announcements at Disney D23!

Star Wars Episode IX: The Rise of Skywalker serves as the final episodic Star Wars movie, and serves as the conclusion to the Skywalker Saga that encompasses it and the preceding eight movies (Episode I: The Phantom Menace, Episode II: Attack of the Clones, Episode III: Revenge of the Sith, Episode IV: A New Hope, Episode V: The Empire Strikes Back, Episode VI: Return of the Jedi, Episode VII: The Force Awakens, and Episode VIII: The Last Jedi).