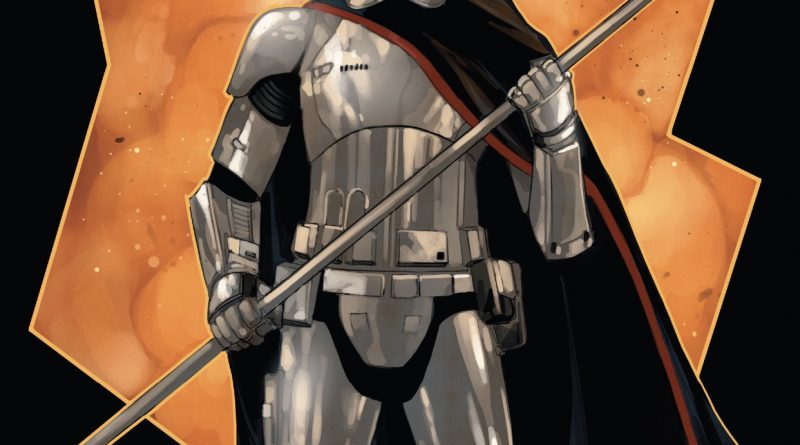 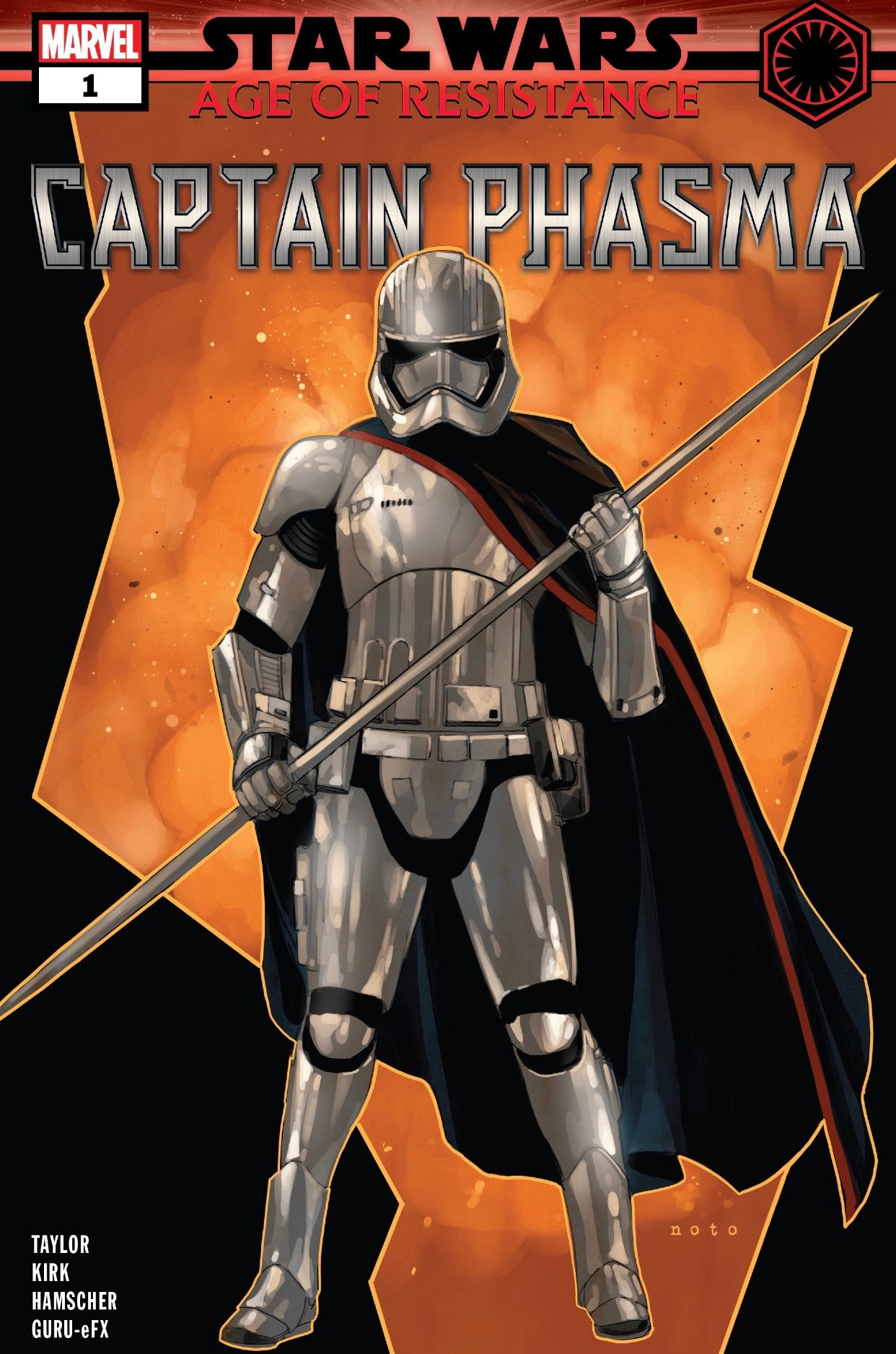 The second issue in Marvel’s Age of Resistance brings us a brutal story involving Captain Phasma and a squad of stormtroopers in the midst of a decisive battle in the Unknown Regions. This is one of the grittier issues I’ve seen in a while and writer Tom Taylor lets us know he’s not playing around with this character. It’s everything I’d expect from Phasma but haven’t necessarily seen while she’s a First Order trooper. This is an incredible issue and carries on the thread started by Delilah S. Dawson’s novel of the character’s namesake which portrays Phasma as an unapologetic survivor. SPOILERS AHEAD…. 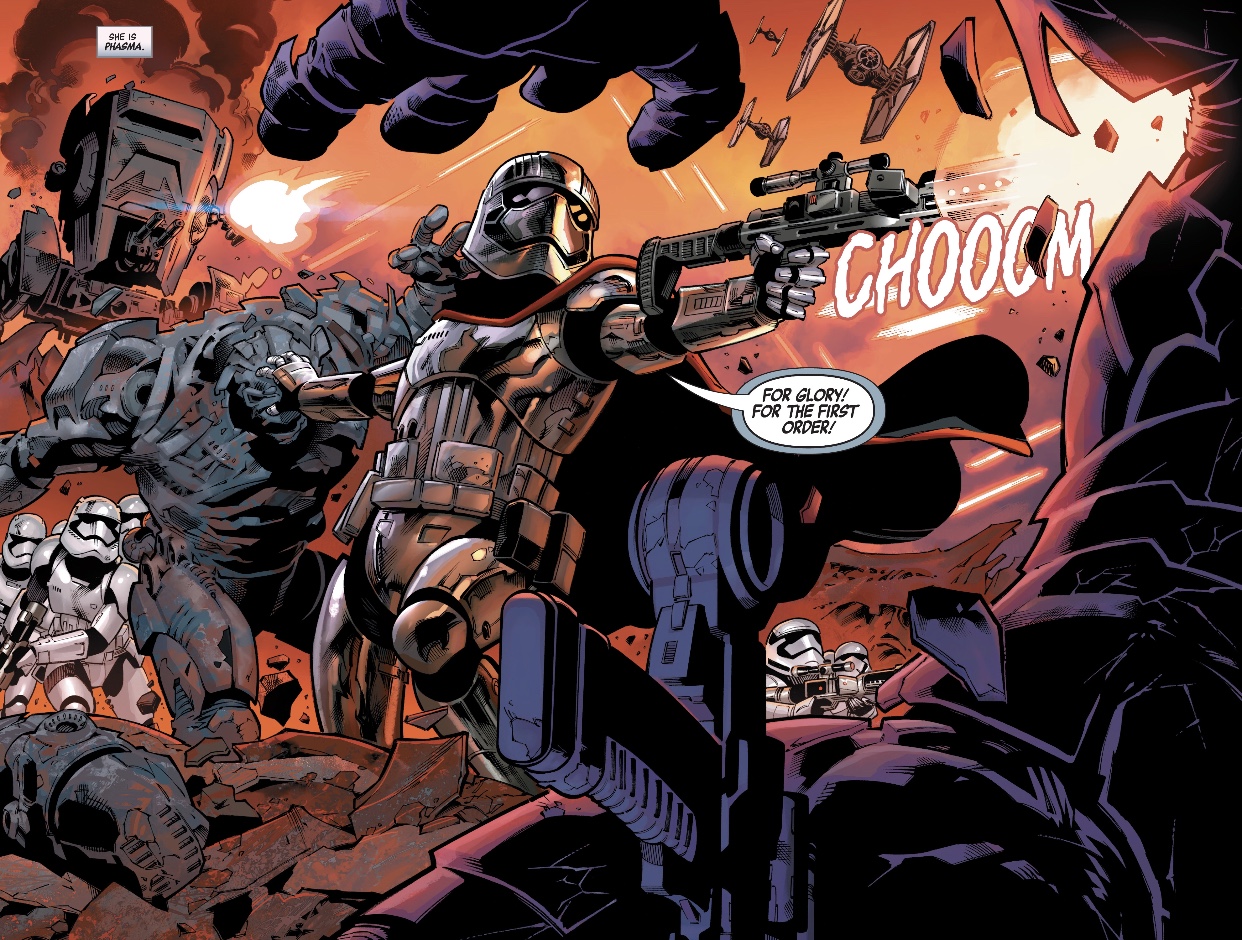 Behold! Phasma! I’m going to hit the ground running here by praising the fantastic artwork by penciler Leonard Kirk, inker Cory Hamshcer, and colorist Guru-eFX. The setting of this issue is relatively contained but the scale of the artwork is galactic. Each frame is poster worthy and I flipped through this with a huge, dumb smile on my face. I am so happy to see this character fighting mercilessly in the trenches of the First Order’s war machine, not because I’m a fan of imperialist conquerors, but because I feel like it’s the first time we really get to see Phasma doing what she’s best at. The First Order have laid siege to a planet in the Unknown Regions called Demir, known as “The Iron Planet”. As you can see in the frame above, the Demirian soldiers appear to be made of iron or have a slate-like appearance, but that doesn’t slow down our favorite chrome-plated trooper. On a side note, in Jason Fry’s expanded novelization of The Last Jedi, Snoke notes the First Order spent a great deal of time conquering the Unknown Regions before they returned to the ‘known’ part of the galaxy. Since reading Fry’s passage I’ve wanted to hear those stories, so this is a great taste and as far as I know, the first time we’ve been treated to it. 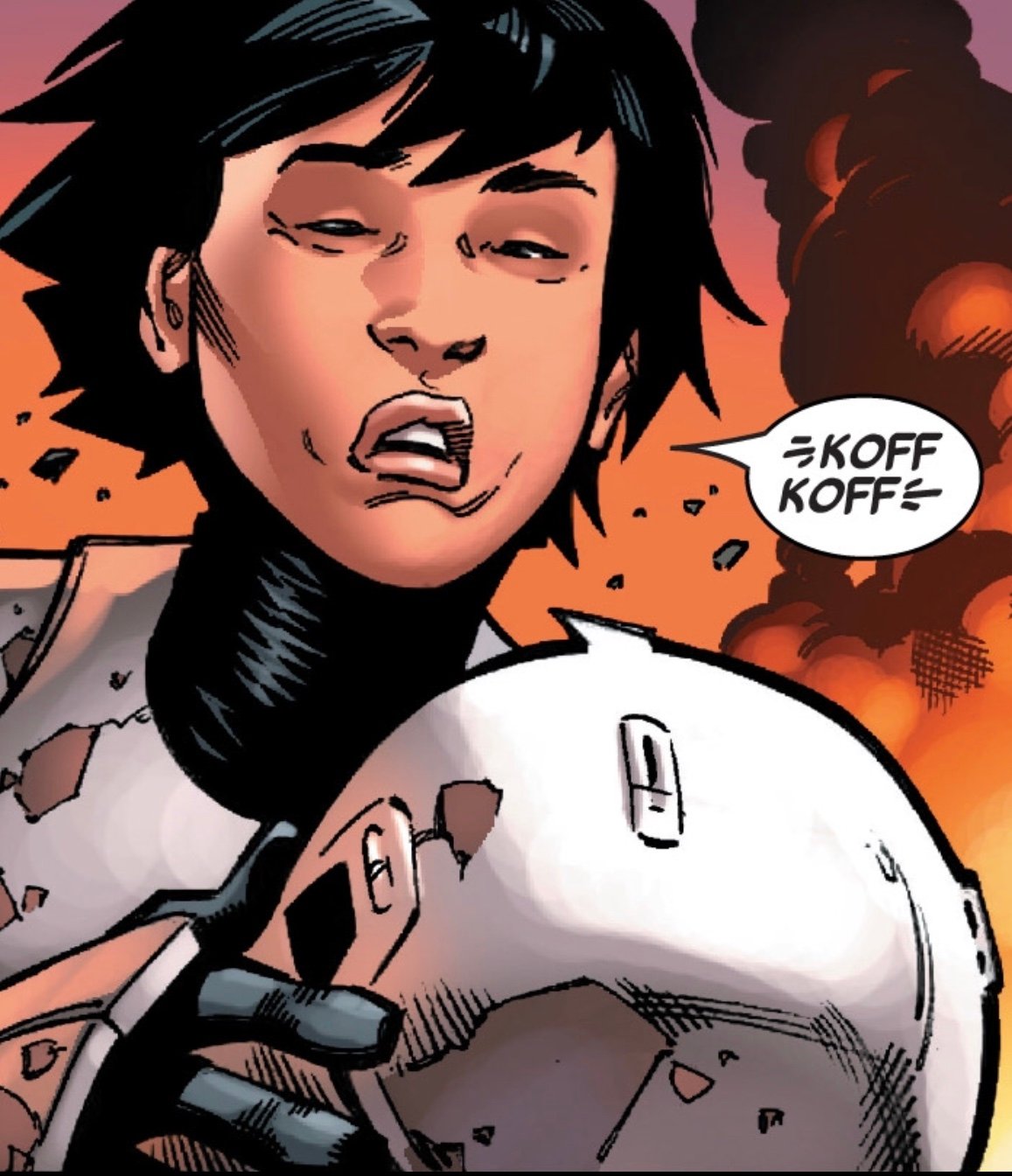 This is KM-8713, First Order trooper who serves as our narrator through this story. KM-8713. After Phasma give a rousing speech to prepare her squad for their last push against the stronghold of Demir, an enemy airship deals them fatal blow, killing and injuring most of the squad. KM-8713 survives and immediately finds one of her friends, badly injured, but pulls them to their feet. KM-8713 tries to save them but Phasma orders her to leave them behind. 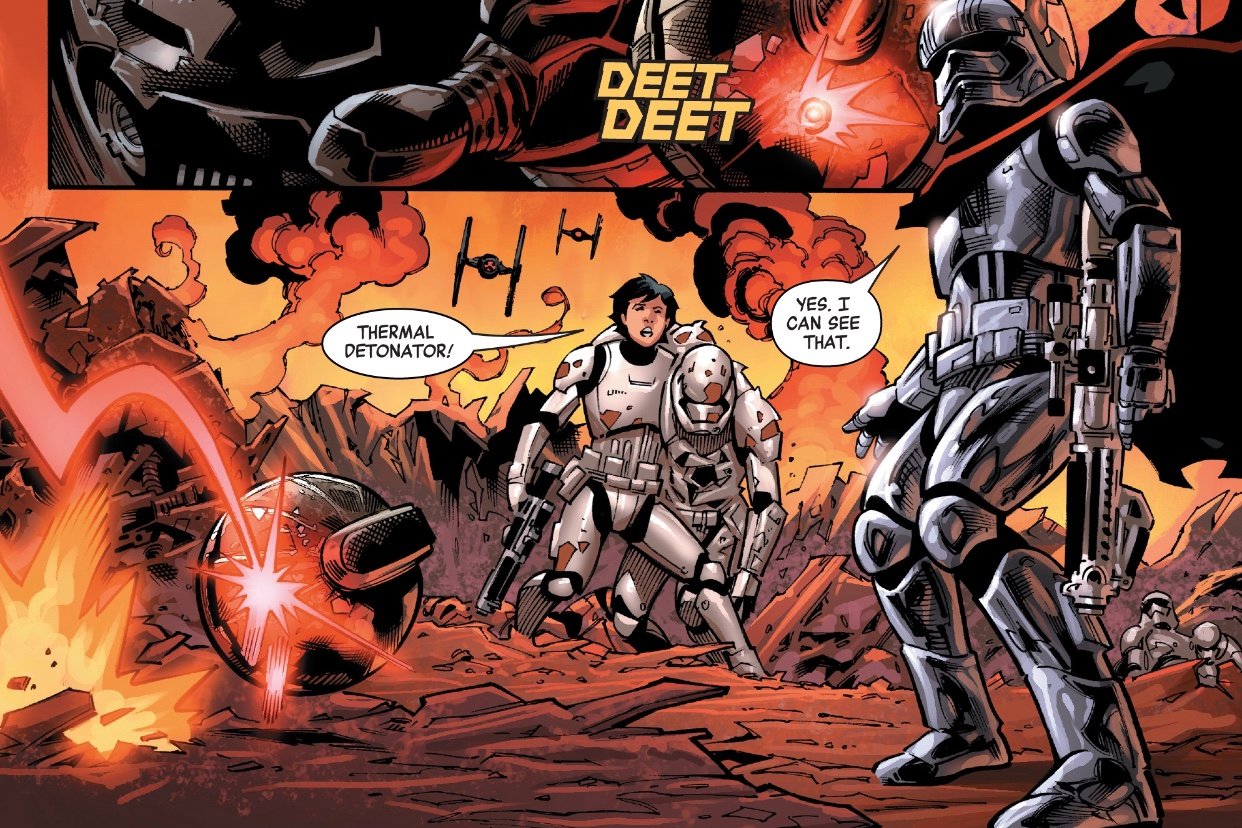 When a thermal detonator comes tumbling toward them after KM-8713 saves Phasma from a stray Demir soldier, Phasma simply takes the wounded trooper and tosses them onto the detonator. I nearly dropped the issue when I saw this. I don’t admire Phasma’s brutality but she’s consistent in her will to do whatever it takes to survive and keep going. Some of you may be shocked reading this but Delilah S. Dawson established Phasma’s determination very well in Phasma. Phasma and her squad have defeated the enemy soldiers but they still have a stronghold to storm. 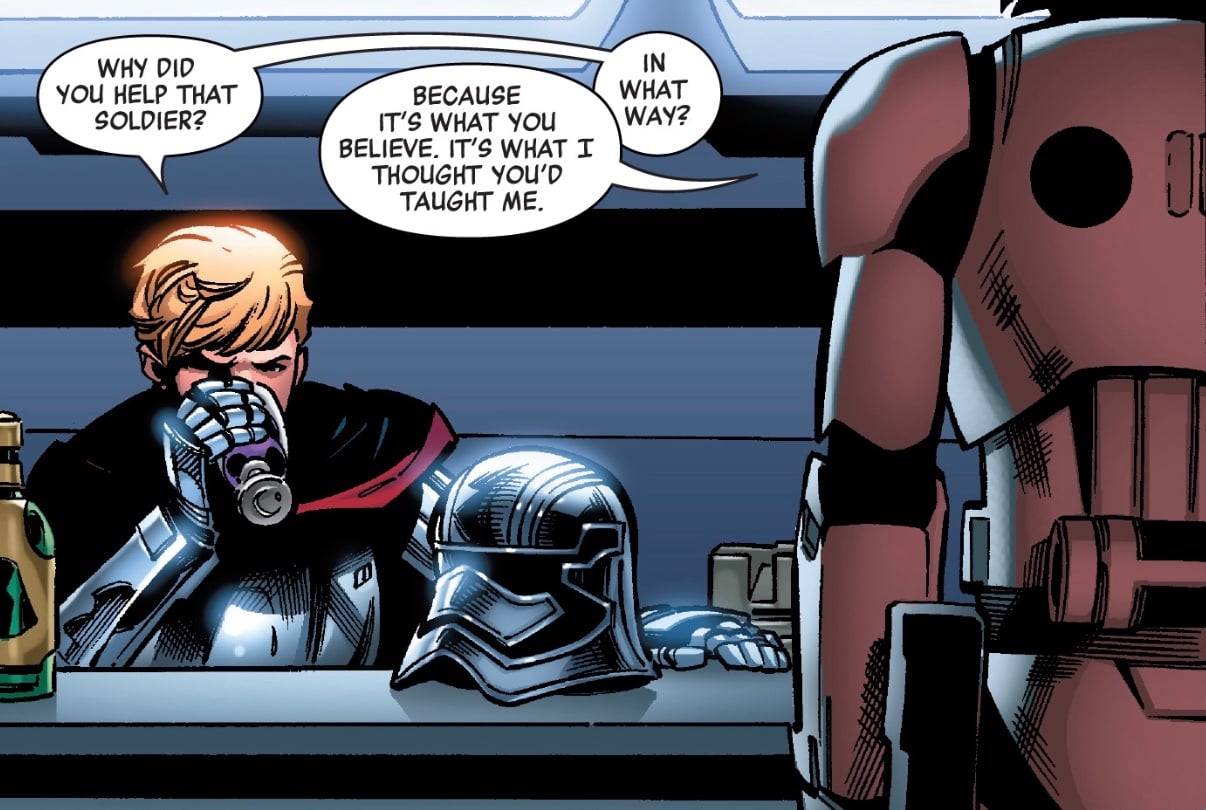 Well, I honestly never thought we’d see it, but here’s a glimpse of Phasma under her helmet. As she plans the First Order’s next offensive she’s asked KM-8713 to join her aboard the command shuttle. Phasma thanks her for saving her life but also scolds her for having compassion and trying to save one of the wounded. Phasma encourages her underling not to have compassion because it’s weak and could get her, as well as many others killed. She says that all KM-8713 should worry about is surviving because if she has ambitions living another day is the only way to accomplish them. Again, canonically, this connects directly to the groundwork Delilah S. Dawson laid with Phasma. 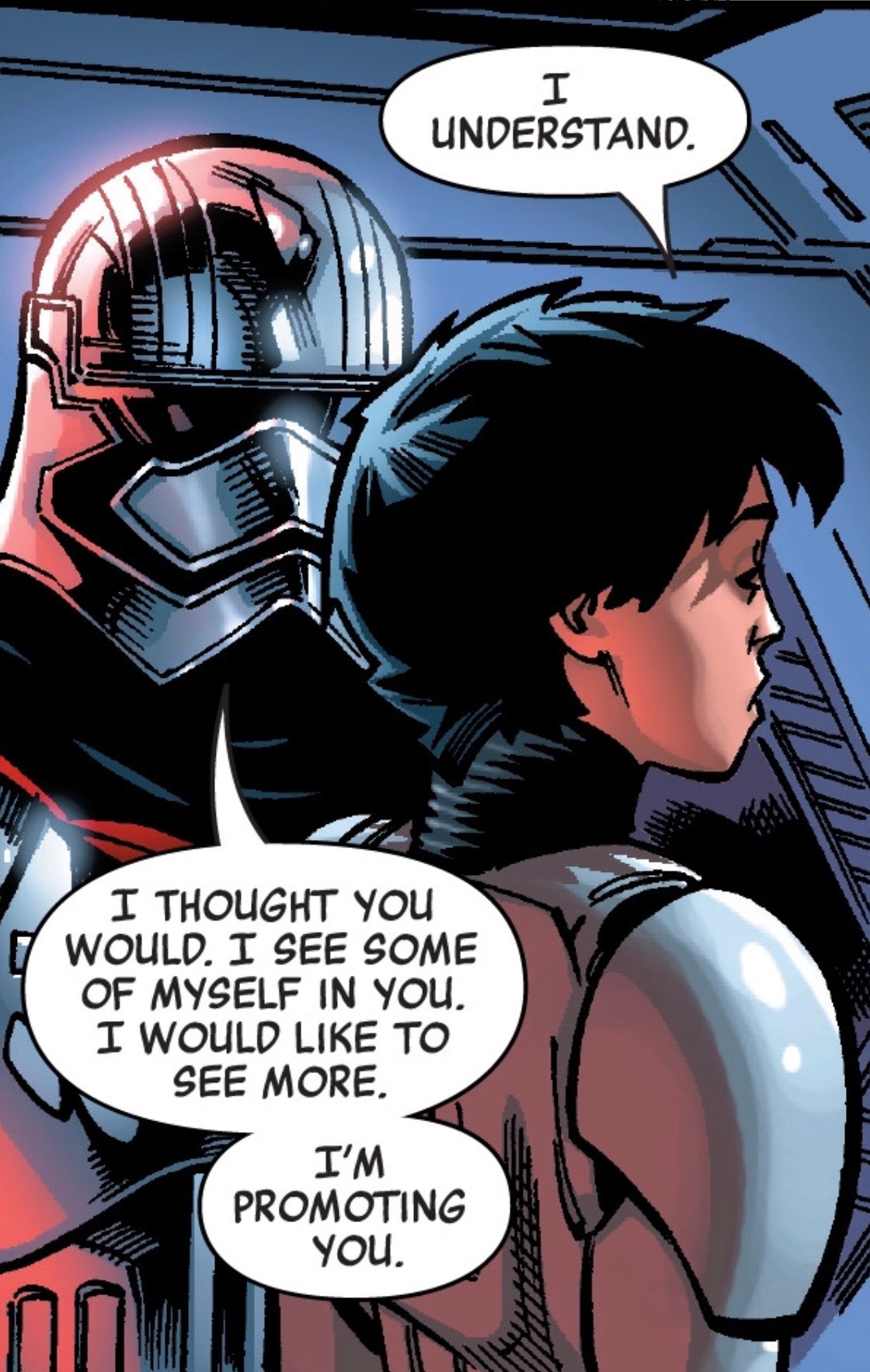 KM-8713 admits to having ambition but it’s singular in her pursuit to become more like Phasma. Phasma tells her she sees herself in the younger trooper and gives her a promotion. I loved this conversation because I feel like it’s the first time we really get into Phasma’s head. The terrible command environment of the First Order is vividly painted, since even someone as high up in the chain as Phasma only has ambition to simply survive. Perhaps she sees KM-8713 as an ally who can watch her back but between removing her helmet and giving career advice – this moment seems unusually vulnerable for Phasma. There’s part of me that believes Phasma wanted a friend and a connection. Knowing the brutal upbringing she had it’s understandable she’d be curious about friendship, since all the First Order offers in terms of human connection is watching your back. Phasma wasn’t taken the same way Finn or KM-8713 was, but she’s still been indoctrinated with First Order, so it makes me wonder if she ever wondered what her life would’ve been like if she hadn’t left with Brendol Hux. 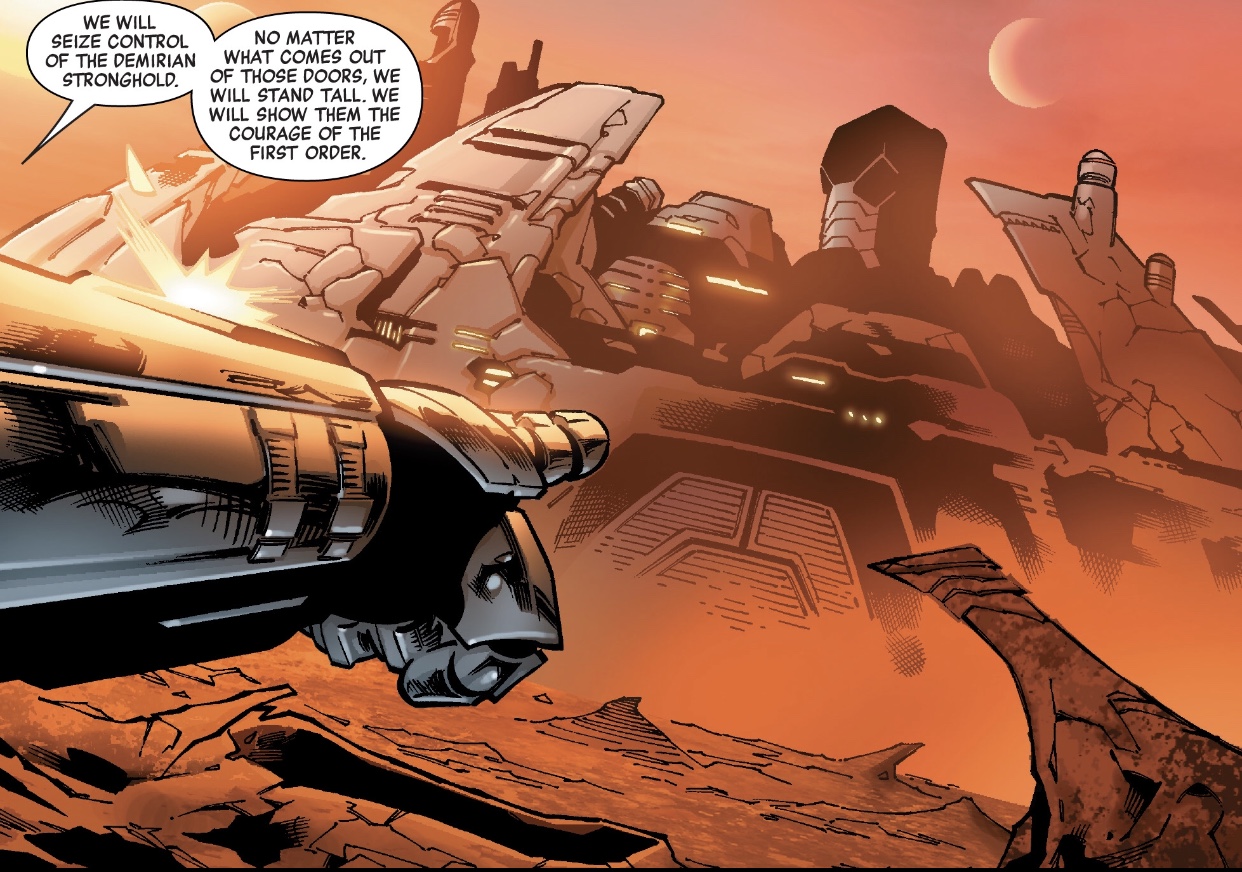 The other reason I enjoyed this issue so much is that it gives us the first chance to see Phasma as a true leader. She’s not just barking orders at her subordinates. She’s leading them against an unknown force and trying to inspire courage. The First Order is despicable, so it makes me wonder if Phasma somehow ended up in the Resistance instead of the First Order what kind of great leader she would’ve been. KM-8713 is now her first officer and Phasma hands it to her to lead the charge. As soon as the stronghold opens its doors, the First Order takes a beating, establishing the Demirians as the dominant force.

KM-8713 realizes something is wrong as Phasma orders them to press on. The First Order is losing the battle but Phasma wants them to keep fighting, seeing lives more as ammunition, while her new first officer does not share that cold disposition. KM-8713 wants Phasma to be the leader she hoped she would be but suddenly realizes Phasma had other plans. 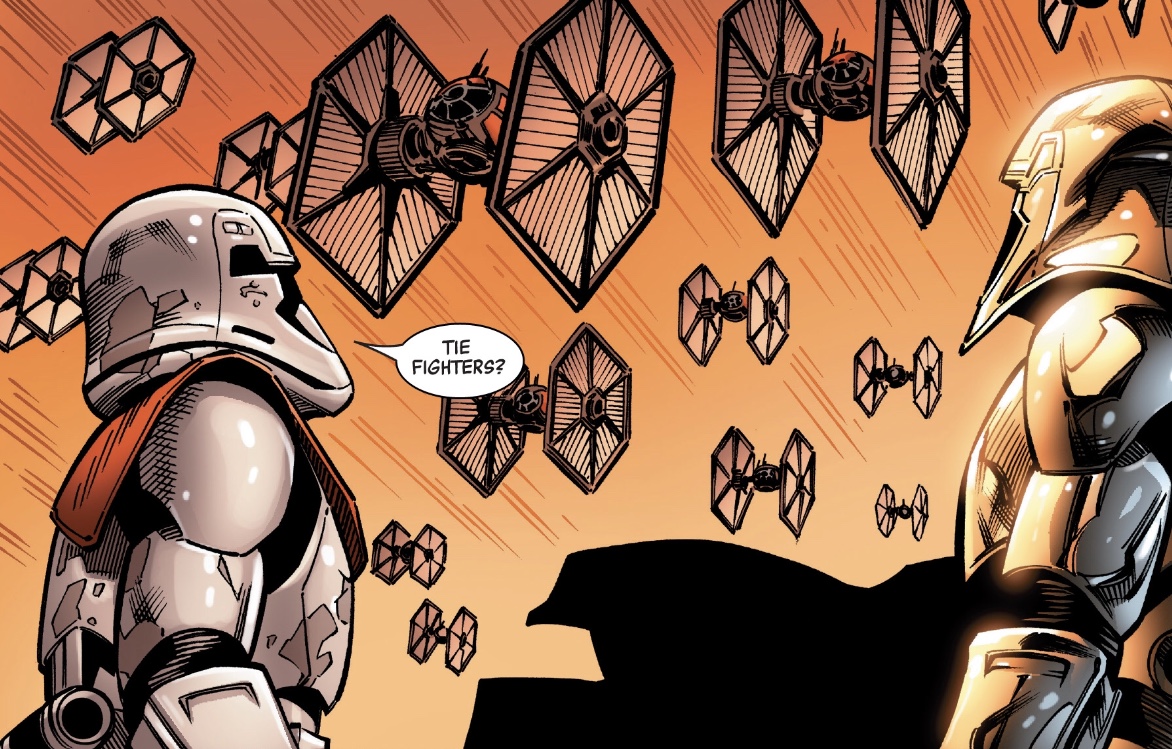 Here’s where the story takes a very dark turn: Phasma used her own soldiers as bait. She only needed the Demirians to leave the stronghold to defeat them. So she lured them out and then unleashed the First Order TIE Fighters on them. KM-8713 realizes this is what it takes to be a commander in the First Order and she’s not having any of it, despite her admiration for Phasma. Phasma will let her own soldiers die as the TIE Fighters bomb the Demirians.

Like most soldiers loyal to their platoons, KM-8713 calls out Phasma for being a traitor. And a coward. KM-8713 takes a direct blaster shot at Phasma, but we know that armor is special and it just ricochets off of her. Suddenly, the tables turn, as Phasma confesses she just used KM-8713 to galvanize the troopers and get them to do what she wanted. The betrayal left me speechless, as I’d just started cheering for Phasma, but as KM-8713 learned, the captain will do whatever it takes to survive. 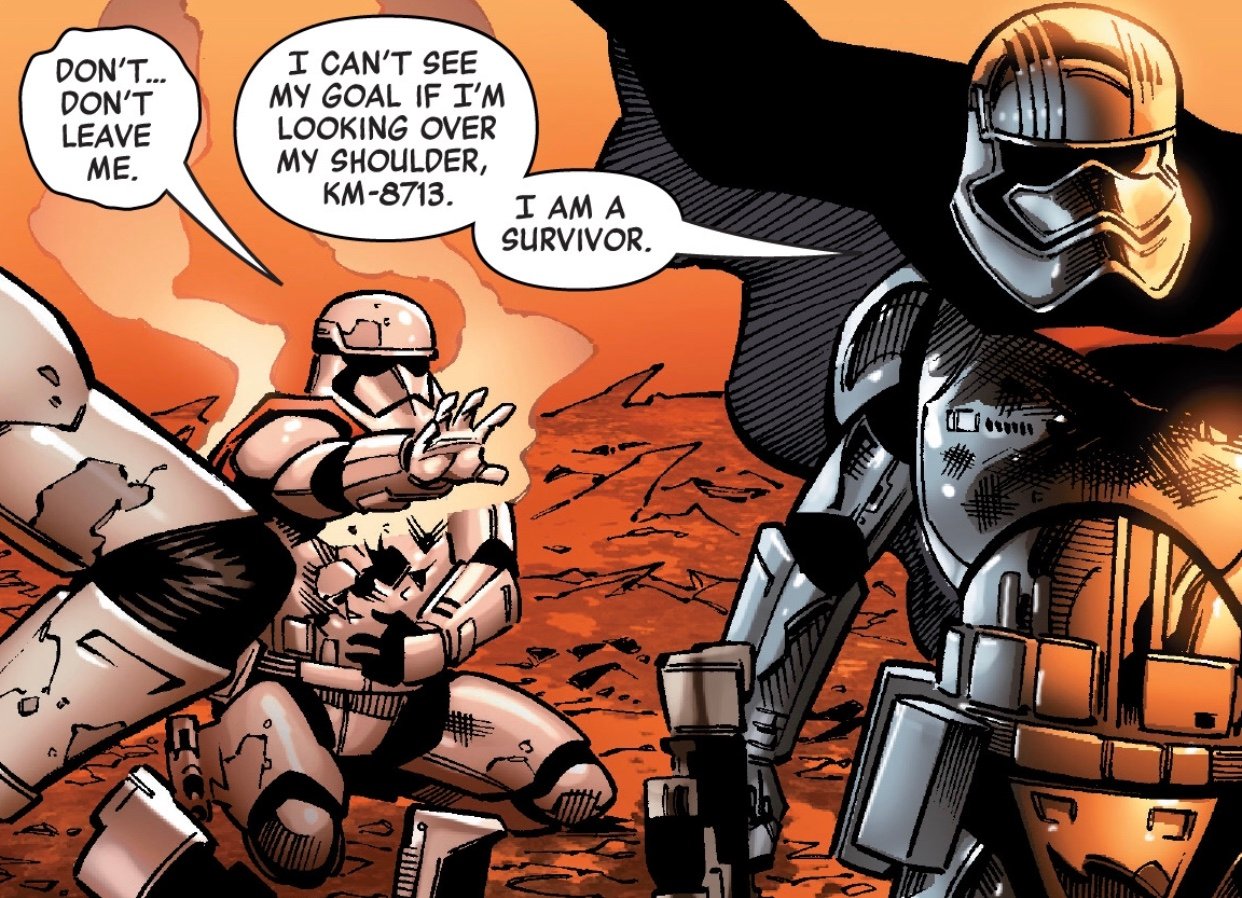 Ugh. This is one of the most gut wrenching endings. You have to wonder how many hopeful soldiers Phasma lured into this trap as the First Order marched across the Unknown Regions. Phasma exposes herself as a true villain. She manipulated whatever good KM-8713 had left and used it to her for her own ends. Phasma only moves on to another campaign and another battle, serving as a cold cog in the First Order. As disturbing and enraging as it is, it’s heartbreaking to see a character as strong as Phasma give herself over completely to the First Order with this kind of act. KM-8713 could’ve been a friend, but Phasma became so far gone she only saw her as a stepping stone. We all know where Phasma’s story ends, which makes it even more tragic.

I loved this issue. Tom Taylor’s writing is phenomenal. The emotions I experienced from beginning to end of the issue were all over the board and I felt devastated by the end. To me, that’s the tell-tale sign of exceptional writing and gives me hope the future issues in Age of Resistance will be equally as taxing for my emotions. The art serves the issue well and they are seamless in this juggernaut of a war story. This is only the second issue but I think Star Wars fans better climb aboard now for that long wait until December. One of the fatal flaws of the sequel trilogy was Phasma’s limited screen time. Not that this makes up for it, but imagine Tom Taylor and many other writers could give us a voluminous account of her trials in the Unknown Regions. I’d be the first in line to read about it. Also sounds like it could make one hell of a Disney+ series. 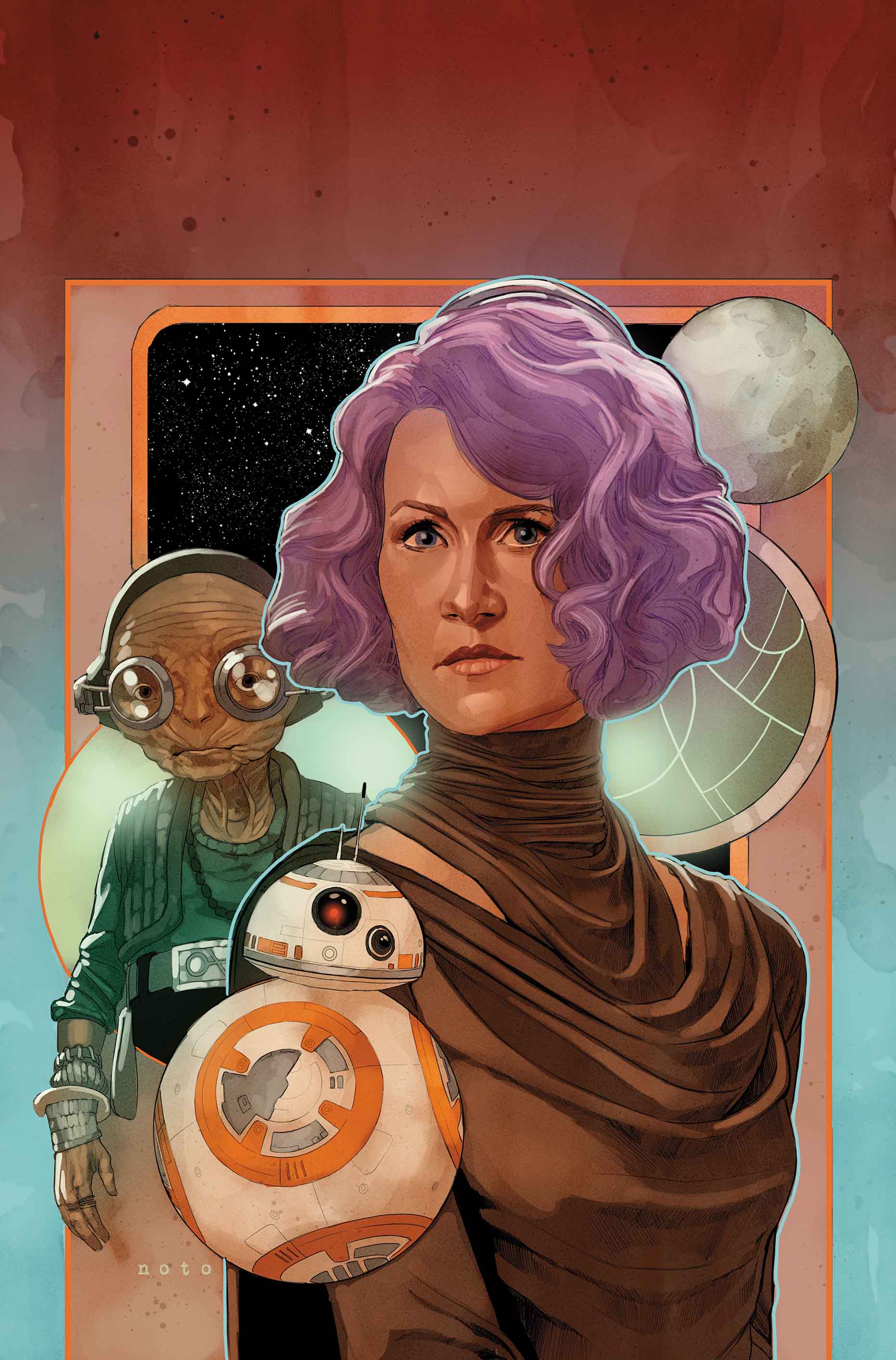 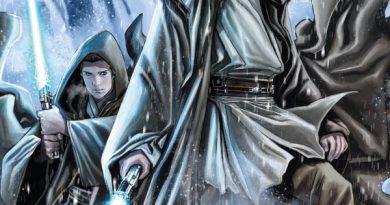 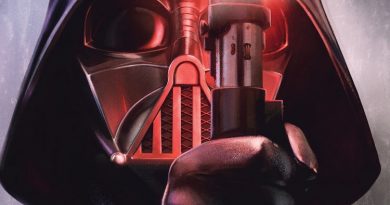