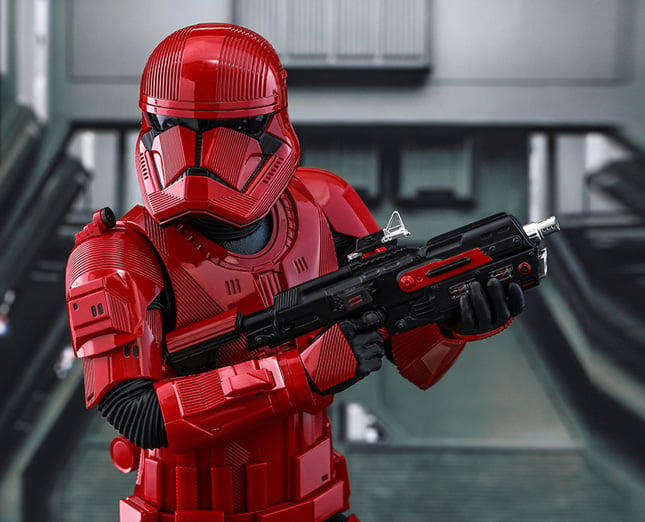 San Diego Comic-Con is underway, and while Star Wars may not have a huge presence at the convention this year, fans are still being treated to some cool reveals in the world of toys, comics, novels, and more. Yesterday, patrons of the event were able to get their first real look at the new Sith trooper in a special exhibit about the evolution of stormtrooper design. Fans were able to see the blood red armor up close and personal while reading the first official description of the new stormtrooper’s function within the First Order. Read on for the description, as well as a video featuring The Rise of Skywalker writer/director J.J. Abrams talking about the new trooper design.

It should be pretty clear from the trooper’s designation (which literally includes the word “Sith”), but if there was ever any doubt as to the inspiration behind the new crimson soldiers, the official description (seen alongside the costume display) confirms that the new design is directly inspired by the ancient dark order. In the description, we also have confirmation that the Sith troopers do, in fact, belong to The First Order rather than another faction as some have speculated.

In its ultimate push towards galactic conquest, the First Order readies an army of elite soldiers that draw inspiration and power from a dark and ancient legacy.

Also check out the fantastic video “The Evolution of the Stormtrooper”, screened at SDCC via Johnamarie Macias (@BlueJaigEyes) below. In the video, Dave Filoni (The Clone Wars, Rebels), concept artist and executive director Doug Chiang (Lucasfilm), J.J. Abrams, and actress Gwendoline Christie discuss the inspiration and influences behind the various stormtrooper designs throughout the years in the Star Wars saga, taking viewers on a brief journey from Ralph McQuarrie’s original concept to the sleek and modern looking First Order troopers seen in the sequel trilogy.

Here’s part one of the Stromtrooper video that plays at the exhibit. It includes behind-the-scenes footage of how the Sith Trooper was made for #TheRiseOfSkywalker. #SDCC #SDCC2019 pic.twitter.com/KU1MBCatw4

In the third part of the video, J.J. Abrams comments on the new Sith Trooper appearing in The Rise of Skywalker:

“In The Rise of Skywalker, we have new troopers that are completely different in design. The materials, the color, the lines…there is something about the aesthetic of it that just felt absolutely right. I cannot wait for people to see the work that everyone’s done.”

We’ll keep you updated on everything Star Wars related coming out of SDCC this year, so check back here for more interesting news from the event. Keep your eyes peeled for any information that may be coming out of the various panels tomorrow, especially the Hasbro (3:00pm), ILMxLAB (4:00pm) and Lucasfilm Publishing (5:00pm) panels, which are likely to have some cool stuff for the fans.