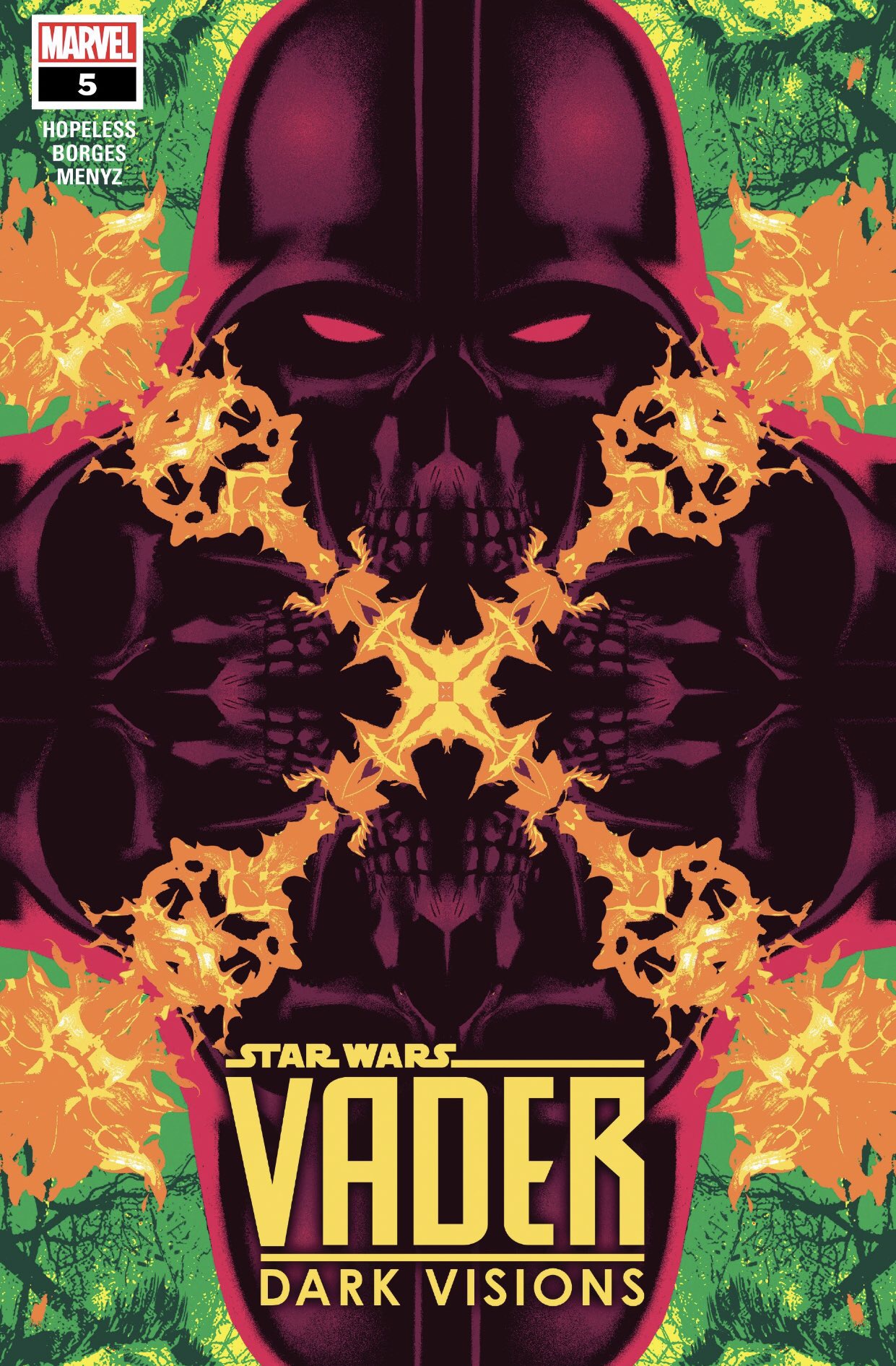 Well, I’m relieved this series has ended. We here at Star Wars News Net try to keep it positive, look for the good in every piece of content that comes our way, and keep our criticism of stories constructive. Vader: Dark Visions made that very hard. While I applaud the ambition in Marvel’s unconventional approach to this Star Wars icon, this series’ five-issue run hovered somewhere between lackluster to downright offensive. In this final installment, writer Dennis “Hopeless” Hallum depicts a psychedelic, nightmarish version of the Dark Lord in pursuit of a very unfortunate rebel. SPOILERS AHEAD….

The story opens on a planet called Lokud 7, known for it’s hunting and drinking, at least according to the bucket heads. Vader is in pursuit of some of rebel spies who’ve stolen vital Imperial information. If Vader’s been dispatched that can only mean these spies must be a pretty big deal. The Imperials meet the native predators of Lokud 7, with Vader swiftly dispatching what looks like a cross between a dinosaur and a Venus fly trap, but it’s actually a plant. Right away, the flora and fauna are established as very dangerous. We haven’t seen a lot of hazardous botanicals in Star Wars, so I’m up for more stories on Lokud 7, since this is its first appearance. 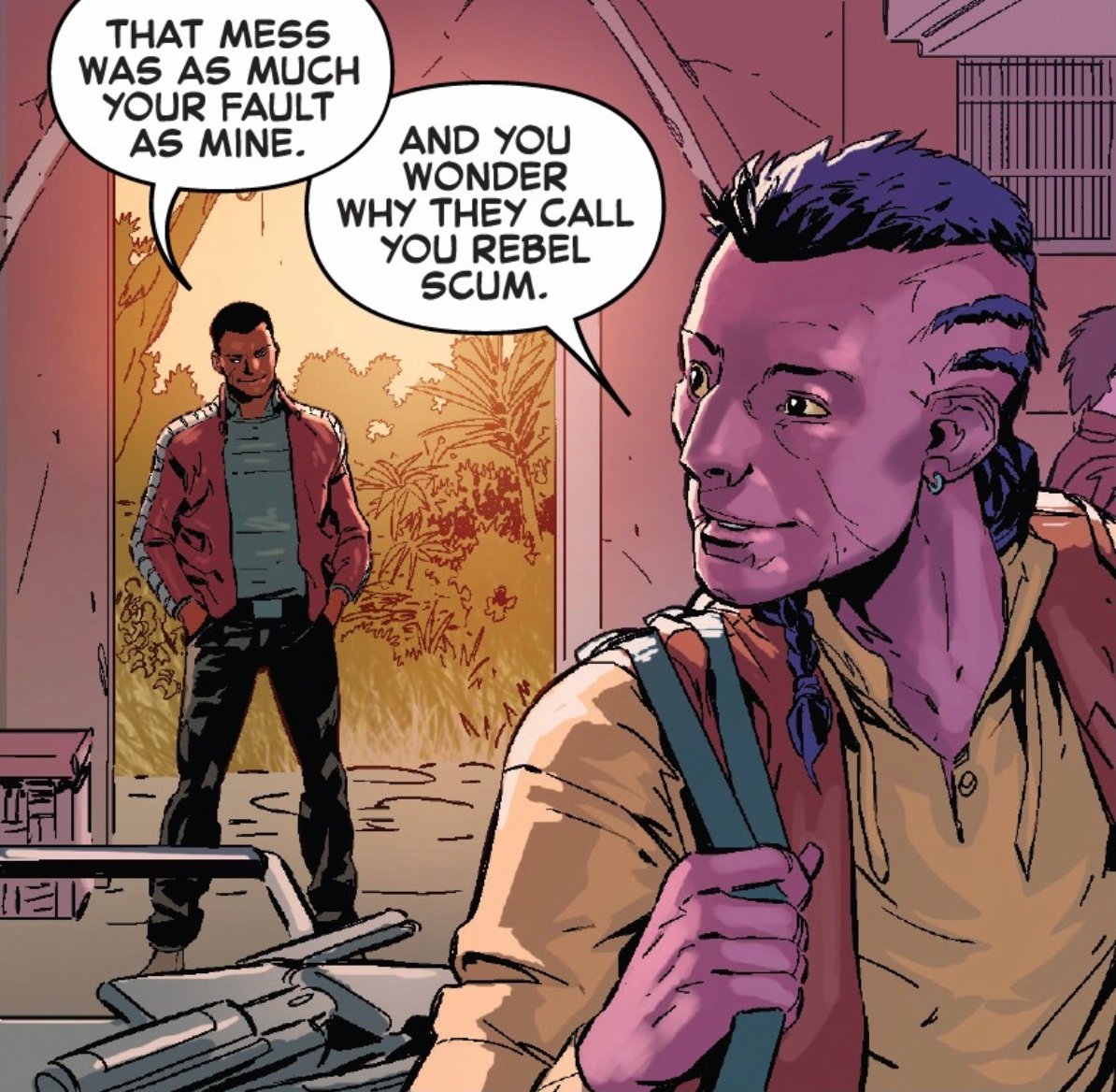 We meet up with the spies, as they check in their weapons before being permitted to enter the local cantina. We learn the group is called Black Squadron and it seems the proprietor of the cantina (pictured above) is a Rebel sympathizer. Interesting choice of name, Black Squad, since Poe Dameron’s squad also had the name in the Resistance. I wonder if we’ll learn more about them or if this was intended to be an introduction to the Rebellion-era squad. The spy in the background hands over the intelligence they received to the proprietor for safekeeping. The proprietor prides his establishment as a place where Rebels and Imperials can put aside their differences and drink together. I have to wonder how many times that has actually happened, especially after recently finishing Alphabet Squadron – a story that underscores the tension and bloodshed rife in the galaxy during this civil war. 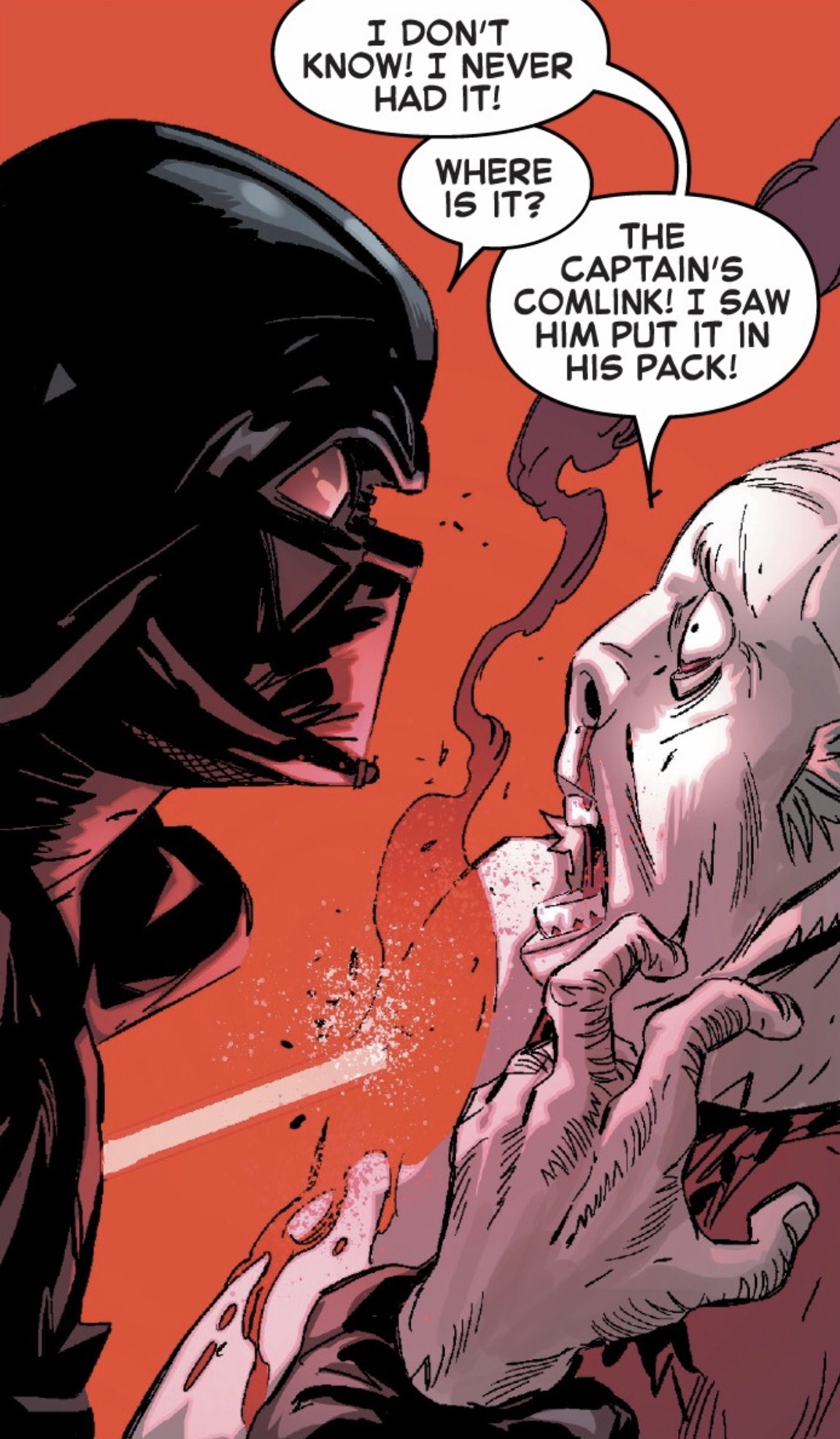 Well, if there’s any Imperial who would bust up a drunken armistice, it’s Darth Vader. The Dark Lord bursts into the bar, lightsaber swiping first and asking questions later. He swiftly dismantles any Rebels who would put up a fight and learns the intelligence he’s been looking for is in the process of being hidden by the proprietor in the back. One of the biggest problems I’ve had with Vader: Dark Visions is the anonymity of his many victims. We don’t really ever get a chance to invest in them. This issue especially. We know this proprietor is a sympathizer with good intentions who wants to provide some sort of peace to beings in his corner of the galaxy. Vader’s victims seem less like living beings and more like props to lift up the Sith Lord’s menace.  But, I don’t think we need that. It’s Darth Vader. He’s the embodiment of harrowing.

Vader finds his prey, just a few seconds too late. The proprietor makes a break for it, heading into the dense jungles he reassures himself he knows so well. I’ve only been reading this book for a few minutes and I know heading into a dense jungle, filled with carnivorous foliage, is not a good plan. One doesn’t have many options when pursued by Lord Vader and his crimson blade. Unfortunately, for our anonymous proprietor, he stumbles upon an entirely different level of unpleasant vegetation: psychotropic plants capable of producing vivid, hellish hallucinations. The plants are known for “poisoning the mind”. So, not only is this poor person being hunted by the one of the deadliest Sith Lords in galactic history, he has to try and hide while loosing his mind to psychedelics. Think Scarecrow’s madness inducing powder from Batman Begins. 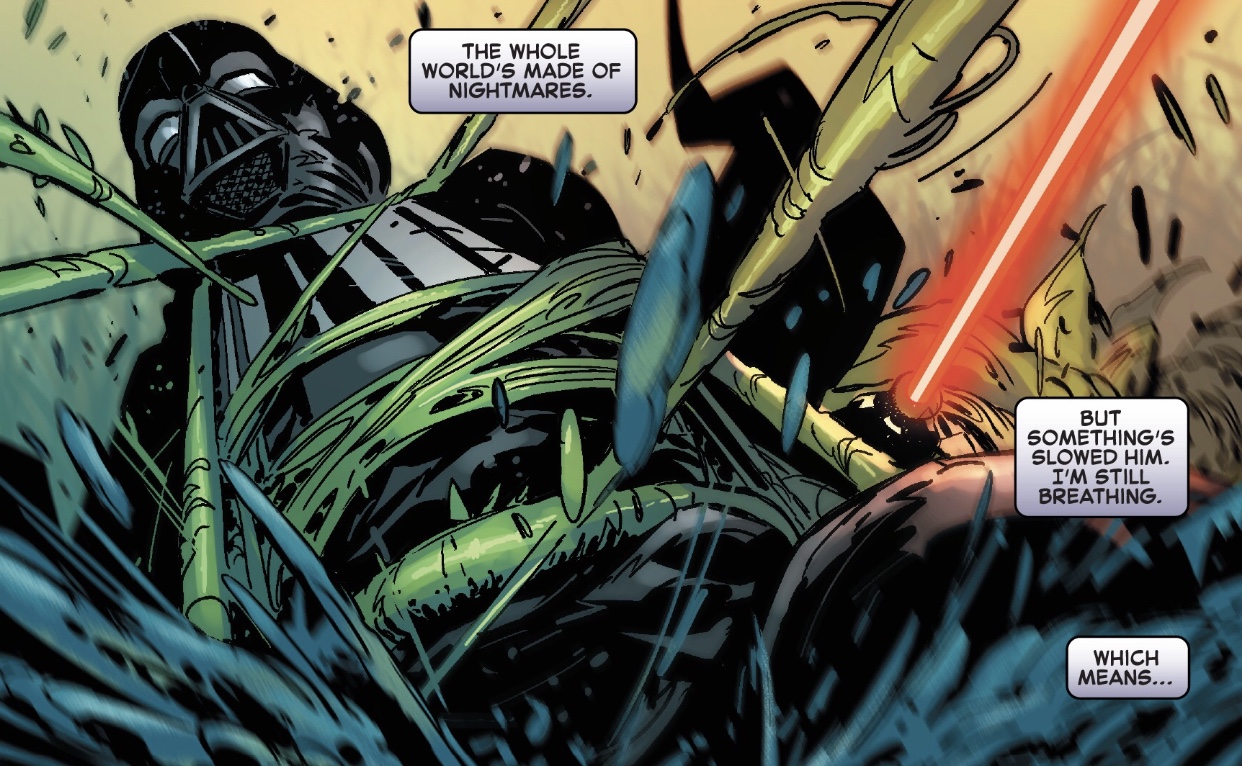 When Vader catches up, the proprietor-descending-into-madness unleashes his blaster on Darth Vader, who seems to dodge each blast without a problem. A different sort of plant attacks Vader, pulling him to the ground. Must be quite a shrub if it can take down Vader. It buys the proprietor time as he starts talking himself down from his hallucinations, but they’re relentless and flood his vision at a frantic pace. Huge props to artist Geraldo Borges and colorist Marcio Menyz on the delirious tone of the art. It’s incredibly stirring and I loved every frame. I wish the stories and characters matched its merit.

The proprietor stumbles upon an old hunting cabin, once belonging to his uncle. It’s abandoned and he sees it as a haven of sorts. Thought this frame was pretty cool, the proprietor talking himself down from the rising height of madness. He makes it inside to see several taxidermy heads of predators from around the galaxy. Looks like his uncle was some sort of trophy hunter. All of those start to come to life in front of him but he avoids falling into the fear. Ghosts of the Rebels he just saw Vader mow down in his establishment return to haunt him. The proprietor gets out his blaster and begins firing at everything. He’s finally crossed the threshold of complete descent into the plant’s neurotoxins. He corners himself into a dark corner of the cabin as Vader appears and pulls out his last line of defense…a thermal detonator. Yeah, that’s not going to stop a Sith Lord.

Vader has teeth, from a certain point of view. Unfortunately, this is not nearly as terrifying as it should be because once the Dark Lord is upon the proprietor he’s handed the chip containing the intelligence he was after. Then he leaves. That’s right. Vader doesn’t kill the proprietor. Nothing. He leaves the proprietor in the empty cabin, deep in the jungle, to live out the rest of his days in blinding madness as the hallucinations consume his mind.

This issue had a lot going for it but ultimately fell completely flat, in my opinion. One could argue the proprietor is left to a much worse fate but in terms of killing blows, but Vader isn’t sadistic like that. It’s very uncharacteristic, in my opinion, for Vader to leave a loose end like this, no matter how unlikely it is the proprietor would ever recover. I think what bothered me most about these issues is how un-Vader many of them seemed. Don’t get me wrong, I love having my perceptions of a character turned on their head, but there was no reward or possibility of reward because each story was singular and there was never a chance to get to know any of Vader’s victims. There was no reason for the violence. It was senseless and some of it was just cruel. I’m not saying Vader should be mercifully dispatching his victims, but the sadism and cruelty of these stories left the reader nothing to enjoy.

This issue, as well as the series overall, didn’t feel at all like Star Wars to me. No adventure, no thrills…just death and destruction. I don’t feel like that’s why most of us read these stories.