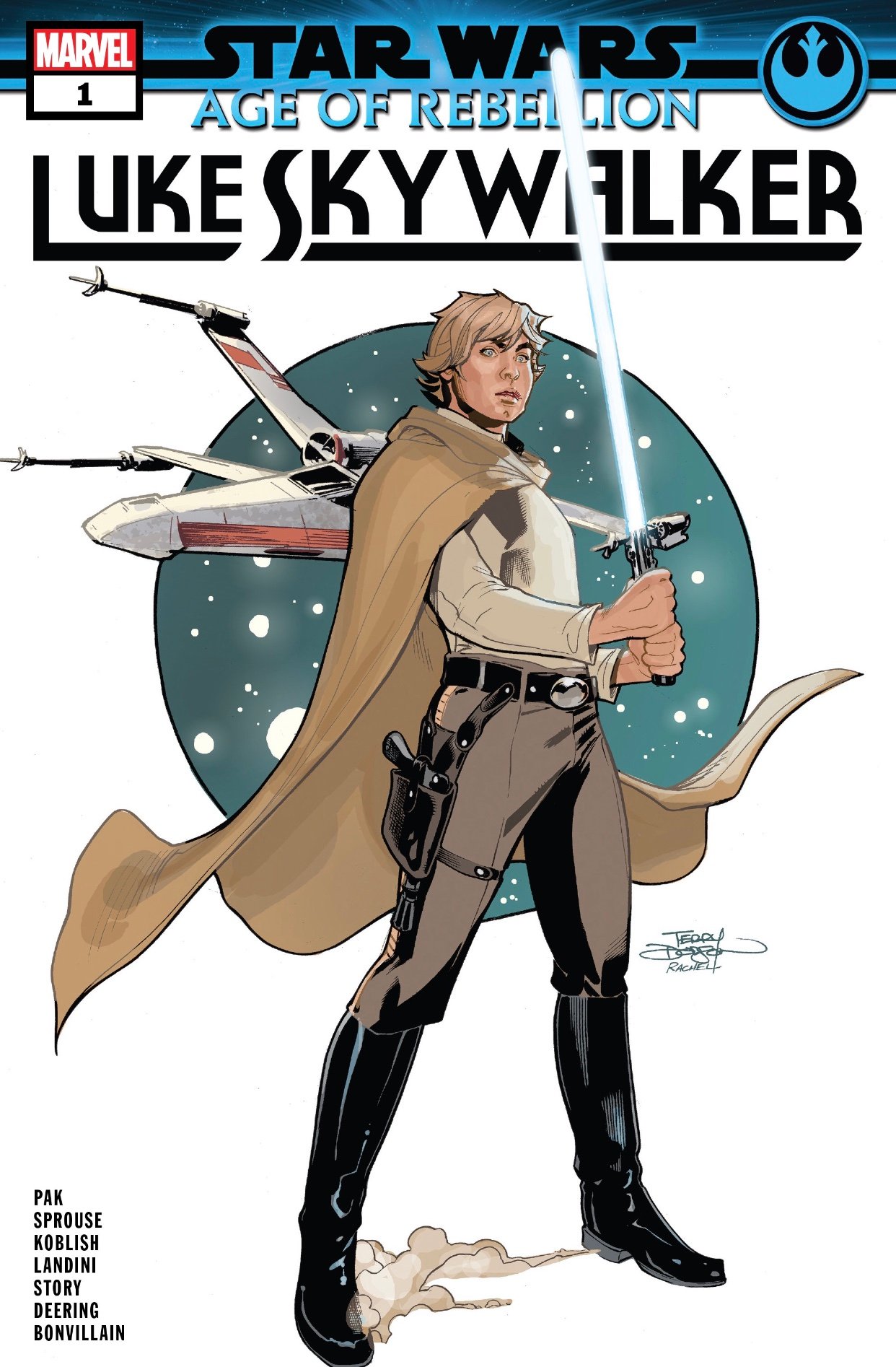 As we approach the end of Marvel’s Age of Rebellion it seems appropriate the final two issues focus on the characters at the epicenter of this story: the Skywalkers. This week, Luke gets to shine in a really cool story that takes place in the year between The Empire Strikes Back and Return of the Jedi. If you’ve been hoping to see more of the green saber and a more honed version of Luke’s skills in the comics, this issue is for you. Oh, and Darth Sidious reaching into Luke’s mind from across the galaxy via the Force might interest some of you as well. SPOILERS AHEAD….

We join an intrepid band of Rebel fighters after they’ve just taken an Imperial refinery in the Outer Rim. Unfortunately, they’ve discovered it’s crewed by Imperial Security Droids. As they attempt to strategize their approach to dealing with the deadly droids, an unidentified voice comes over their communications. It’s an X-wing pilot who just showed up out of nowhere named Luke. They all wonder if it’s that Luke. You know, the one who destroyed the Death Star, fought Darth Vader (and survived), and every other amazing thing we’ve seen him do in the films, comics, and novels that take place before Return of the Jedi. Pretty safe to say Luke began to cross into the territory of legend before the sequel trilogy. Our Rebel heroes get confirmation that not only is a fellow freedom fighter here to help, but an especially skilled one, THE Luke Skywalker. 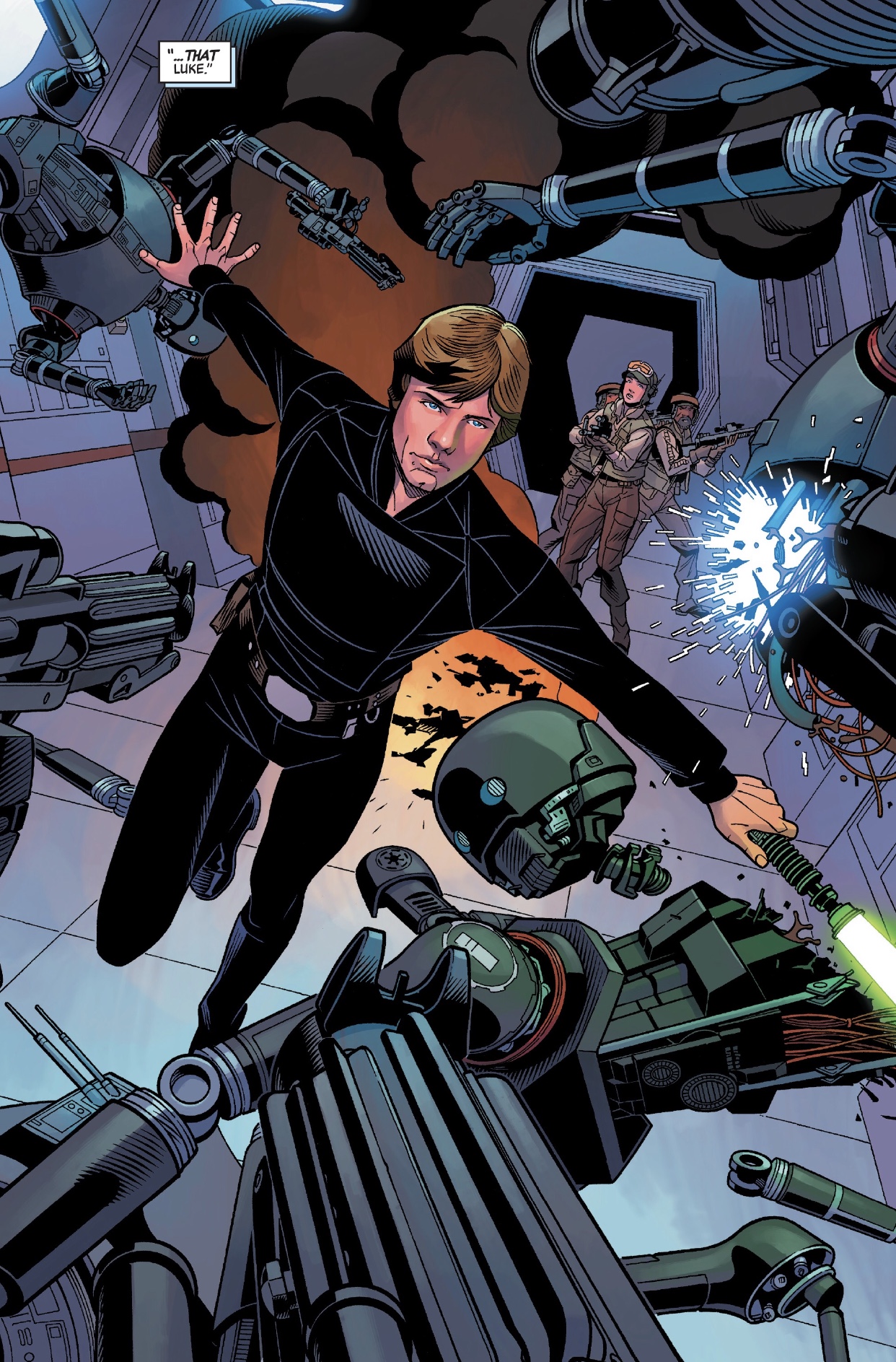 I don’t know about you but I’m picking up some serious Anakin Skywalker vibes here at the sight of Luke dismembering antagonistic droids with his lightsaber. This frame brought a huge smile to my face, as I imagine it did many others who’ve been hoping that green saber would begin to pop-up more in the comics. We really don’t have much from the 2014-current Marvel books with this green saber/black-clad Luke (I think Shattered Empire #4 is all), so it’s nice to see Luke coming into his own as a Jedi. Almost all issues with Luke in them so far take place between A New Hope and The Empire Strikes Back, where Luke is still finding his footing and trying to hone his power in the Force. I don’t doubt that journey to becoming a Jedi is still ongoing when we meet him here but there’s a big difference between the brash, young hero of that time and the cool, confident person we see here. As impressed as the Rebels are with Luke’s handiwork, a Pau’an with the rank of major who commands the squad is a little nervous around lightsabers and mentions the only other glowing blade he’s seen in action was that of Darth Vader.

Speaking of Darth Vader, we aren’t the only ones anticipating Luke’s ascension to Jedi status. Two Sith Lords in another part of the galaxy check-in on the status of their hunt to either bring down the aspiring Jedi or corrupt his powerful skills. Via hologram, Vader kneels humbly in front of his master, who mocks the Dark Lord’s attempts to capture Luke Skywalker. I can’t say I blame Palpatine for being harsh on his apprentice. Vader’s essentially had four years at this point to track Luke down, had numerous close encounters with him, and the young Rebel continually evades him. We all know Palpatine is often content to sit back and wait in the wings but the amount of time and the potential threat he may face from the powerful Skywalker bloodline forces him to look into the matter himself. Only he won’t be hopping into a shuttle craft and start a hunt of his own, all the Sith Lord does is reach out through the Force to find Skywalker in the luminous fabric of the galaxy.

Immediately, Luke can sense something is off, but he doesn’t know what. This is not quite the same as the Force-connection we witnessed in The Last Jedi. It suggests Palpatine holds back and can only sense emotions from Luke, broad feelings and a sense of what’s in Luke’s heart. My guess is Palpatine’s not ready to reveal himself to the young Jedi, he just wants to get a sense of how easy Luke will either be turned to the dark side or destroyed. Luke doesn’t really know what’s up but he definitely seems unsettled from this point in the issue going forward. Force business aside, the Rebel crew is ready to make way through an asteroid field to deliver much needed fuel they’ve gathered from the Imperial refinery to the Rebel Alliance. Luke can sense that trouble is ahead and urges them to hurry, but the major (Pau’an fellow pictured above) reminds Luke it’s not just their survival he’s concerned about – the Rebel Alliance is counting on this fuel and billions of lives will be affected if it’s not delivered. One does not hastily navigate an asteroid field unless one is Han Solo, even if you’re a Jedi. 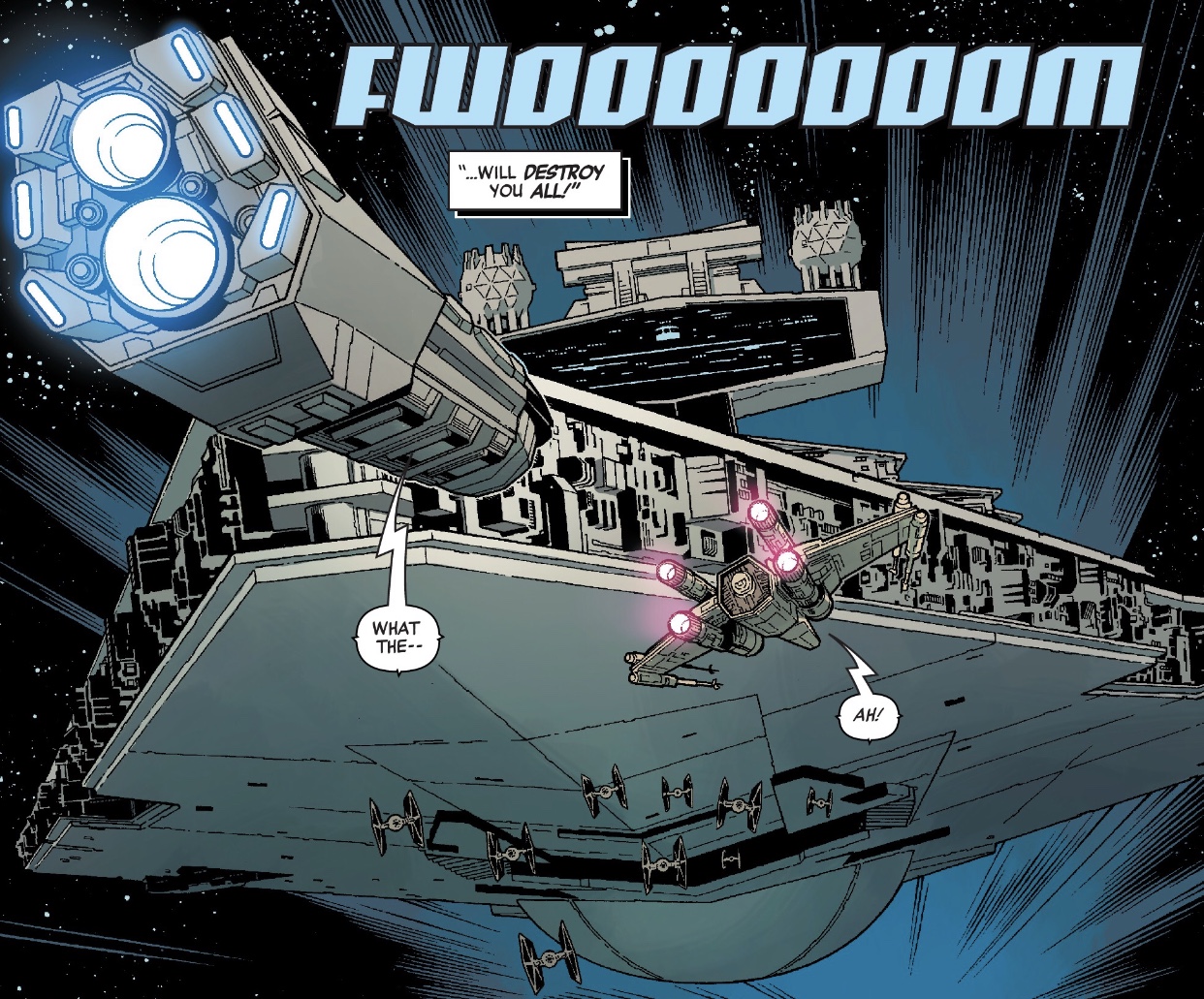 I loved how enormous this Star Destroyer looks in the frame as it shows up, just as Luke and the major debate their exit strategy. Luke, in the X-wing, was prepared to escort them and now has to show off those Skywalker piloting skills the galaxy has come to expect from the namesake. Luke’s frustrated the major didn’t listen to him and now the fear of losing everyone he came to help ripples through the Force, across the galaxy to the sinister observer in young Skywalker’s head.

Palpatine admits he can transmit feelings and even put visions into Luke’s mind, but he steps back from pulling the strings and observes how Luke deals with anger and self-doubt manifesting on its own. Luke goes into something of a trance as the Empire’s ships surround them and the mission seems doomed. Seeing a near future in which everyone is killed except for him shakes Luke. As visions of the Rebel soldiers bodies float lifelessly in space, Luke makes a decision to turn away from the conflict of the galaxy. Palpatine cheers on this vision of Luke turning a blind eye to the endless conflicts in the galaxy and retreating to some distant planet. 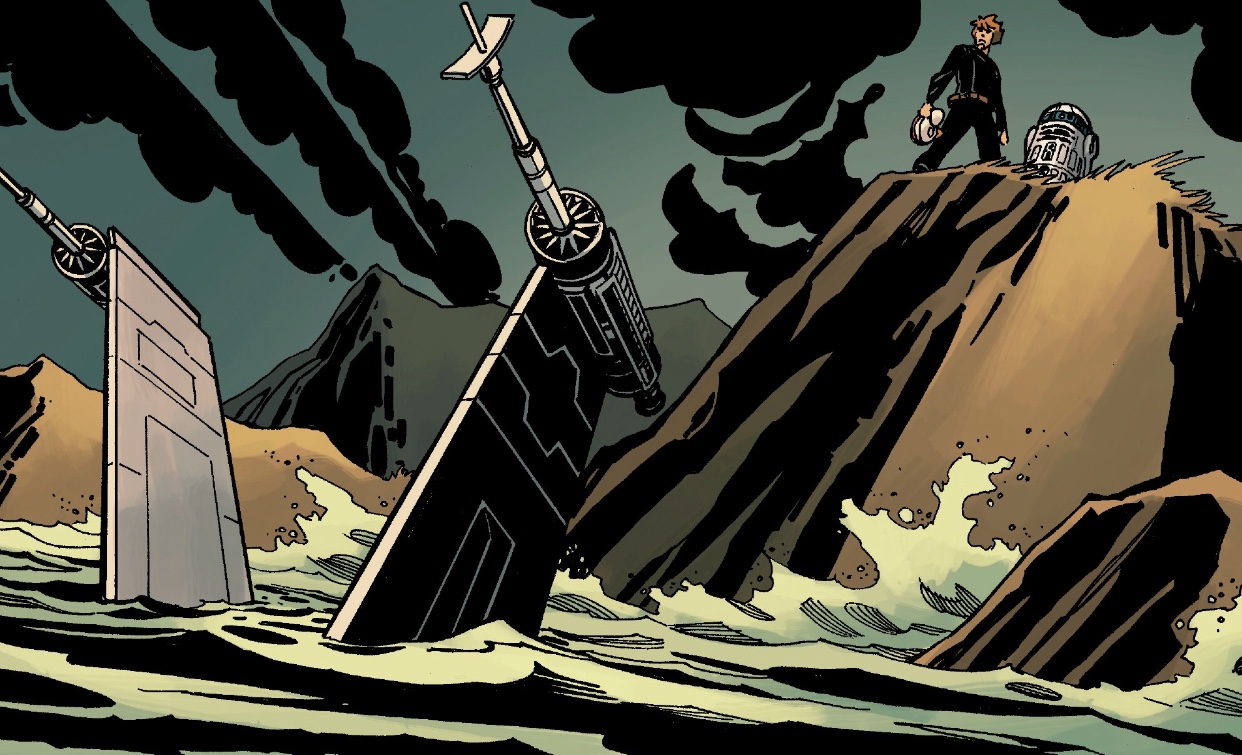 Writer Greg Pak takes us pretty deep into the vision. Hmmm…Luke sinking his X-wing upon arrival to this distant planet is a familiar sight. In dreamlike style, time speeds along as we see Luke encounter a struggling village, only to offer his support with their harvest and other menial tasks. Once the harvest is finished, Luke helps them rebuild their housing and we see the village progress over the years. It’s really interesting to me that this seed to retreat from war for a life of peace was already there. I wouldn’t consider this a retcon to fulfill where we find Luke in later years but it certainly underscores the Jedi was always prepared to walk away from the fight.

We even get so far into the vision as to see Luke end up with a family. He envisions a life of peace by just giving up and turning his power inward. As innocent and happy a vision this is, Palpatine knows how badly Anakin wanted this life before his turn and sees this selfishness – as hopeful and positive as it may be – in Luke as something to be manipulated. Palpatine’s exploitation of Jedi dogma and code ultimately brought Anakin into the dark but that was a masterplan constructed for over a decade. There’s no doubt Palpatine would wait that long again but in this issue there seems to be a sense of urgency. Palpatine grows frustrated when Luke snaps himself out of the vision and rejoins the fight, quickly taking out a pair of TIE Fighters headed for the Rebel ship. Luke returns to the ship with raw emotion and is angered when one of the Rebels informs him the major may be trying to abandon them in his personal shuttle. Palpatine gets excited that the anger still simmers and eagerly watches as Luke makes his way to investigate where the major went.

The major turns out to be someone of public importance who worked with the Rebel Alliance in the shadows because Luke seems concerned about the Empire being able to identify him. Once Luke realizes this, his anger dissipates and he offers to help the major pull a distraction so the rest of the squad can escape with the fuel. Luke flies the shuttle away from the refinery and the squad is safe to deliver the fuel, as the TIE Fighters pursue it instead of them. Luke was close to letting his fear become anger and consume him but he walked it back at the last moment.

Someone’s not happy about that. Like all the best villains in their moment of defeat, Palpatine forgets that his opponents are not as awful as he is. He underestimated Luke Skywalker and ultimately underestimated Anakin Skywalker. The Sith forget that heat of passion is an emotional flash in the pan and is good for very little – especially the long game Palpatine is trying to play. Luke rejected the dark side and did it all on his own. You’re on notice, Sheev. 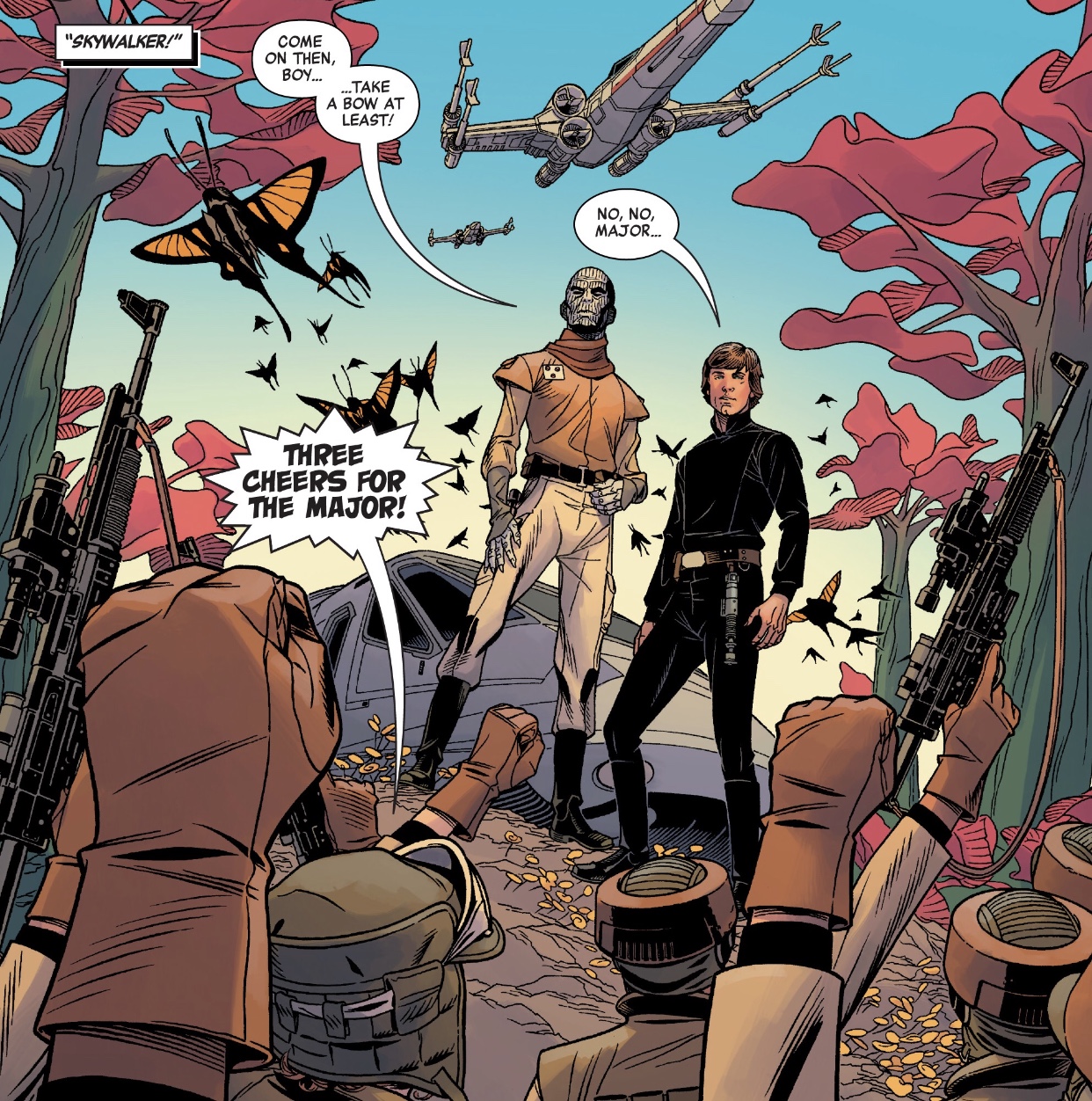 Later, Luke and the major are reunited with the rest of the squad. The major tries to pass the victory off to Luke, but the Jedi steps aside and reminds the major this was his heroism. In a way, I felt like Luke acknowledged the major’s selfless act became a mirror of morality. Luke nearly caved when it came to his own desires of a life of peace while the rest of the galaxy suffered, a privilege most don’t have. When presented with the major giving up his anonymity and his own privilege, Luke saw an altruistic courage he’d nearly turned his back on. Sometimes we all need someone to show us a simple lesson of what it is to be good – even Luke Skywalker.

This is definitely my favorite in the Age of Rebellion series. Writer Greg Pak not only wrote a great story with effective, economical skill – he managed to establish Palpatine was able to keep an eye on Luke for quite some time. To me, knowing Sheev could sense Luke out in the galaxy, even if only in a vague sense, makes the victory over the Sith in Return of the Jedi that much more triumphant. The artwork had a lot of hands in the mix with artists Chris Sprouse, Scott Koblish, Stefano Landini; inkers Karl Story and Marc Deering; and colorist Tamra Bonvillain. I’m usually not crazy about the art shifting so much page-to-page but this didn’t bother me so much. One interesting thing of note in canon, this issue seems to undercut the deleted scene from Return of the Jedi where Luke finishes construction of his lightsaber before hiding it inside of Artoo as the plan to rescue Han is set in motion (Thank you to fellow reviewer Jordan Pate for mentioning this to me). I really enjoyed this look into Luke’s head and I hope there are many more stories in this limbo state of his training.