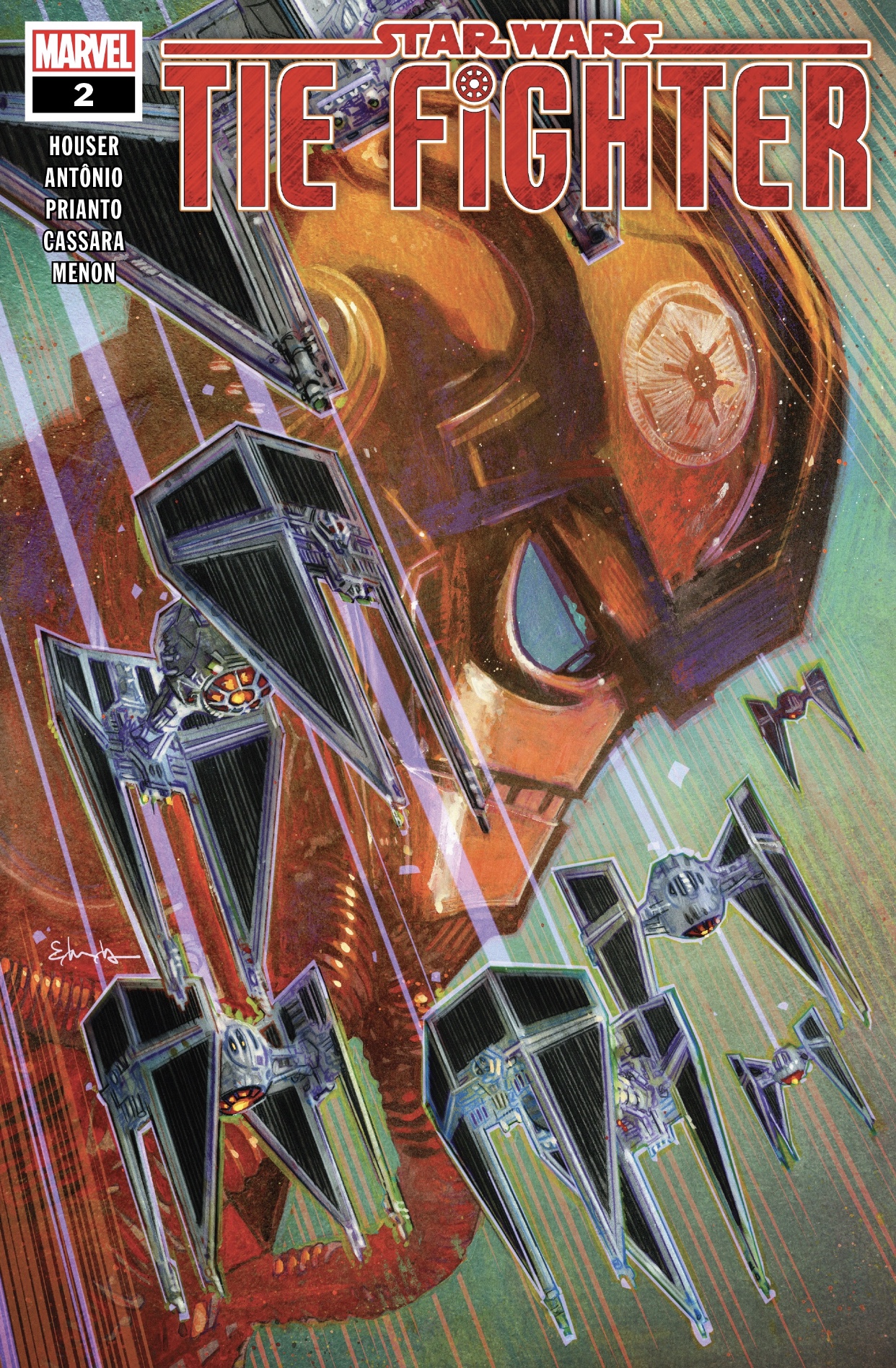 The pilots of the Empire’s 204th, Shadow Wing, have jumped across the galaxy to the Kudo System in hopes of ascertaining why a Star Destroyer has gone silent. Upon their arrival they are met with enemy fire, but not from Mon Cala cruisers or X-Wings of the newly victorious Rebel Alliance…from TIE Fighters and their own ships. The Shadow Wing must come together to defend their ship, the Summit, and figure out who the attacking pilots are. This is the second of five issues in the collaboration between Marvel and Del Rey – and it’s a good one. SPOILERS AHEAD…. 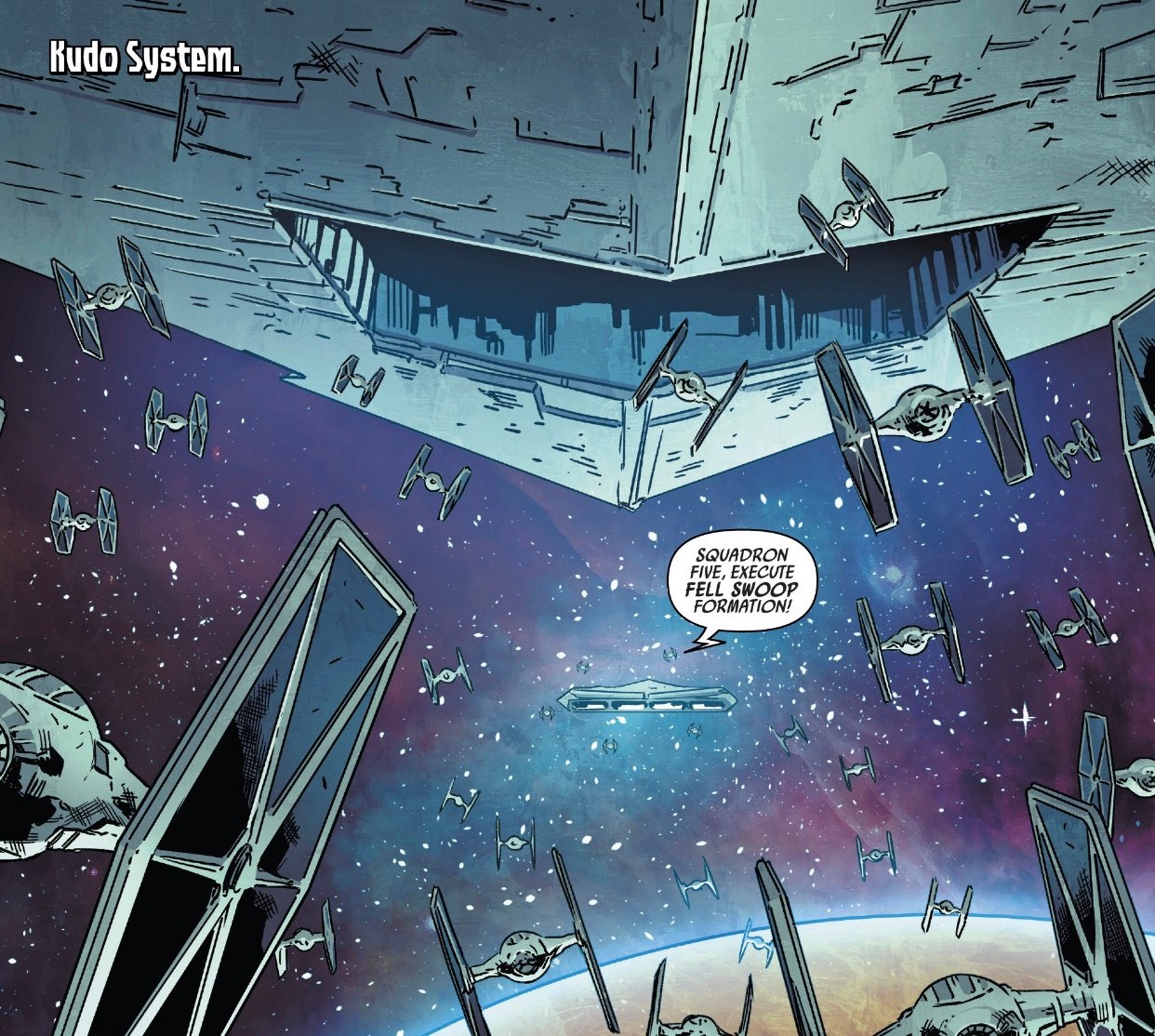 The welcoming committee to the Kudo System is not a warm one. Well, I guess turbo-laser cannons are warm in a sense but the pilots of Shadow Wing are immediately overwhelmed when they’re all firing in their direction. Aboard the Shadow Wing’s Quasar-class ship, the Summit, the captain frantically tasks his squad while preparing for the ship’s escape. Whatever’s left of the Imperial Navy is precious, so the captain orders Shadow Wing to stay behind and defend their escape. The mysterious forces in control of the Star Destroyer and enemy TIE Fighters warn the captain not to attempt a hyperdrive jump. The Summit is badly damaged from the initial ion cannon blast they were hit with at their first jump, but the captain thinks it’s best if they try to get out of the firefight, since they are badly outnumbered. 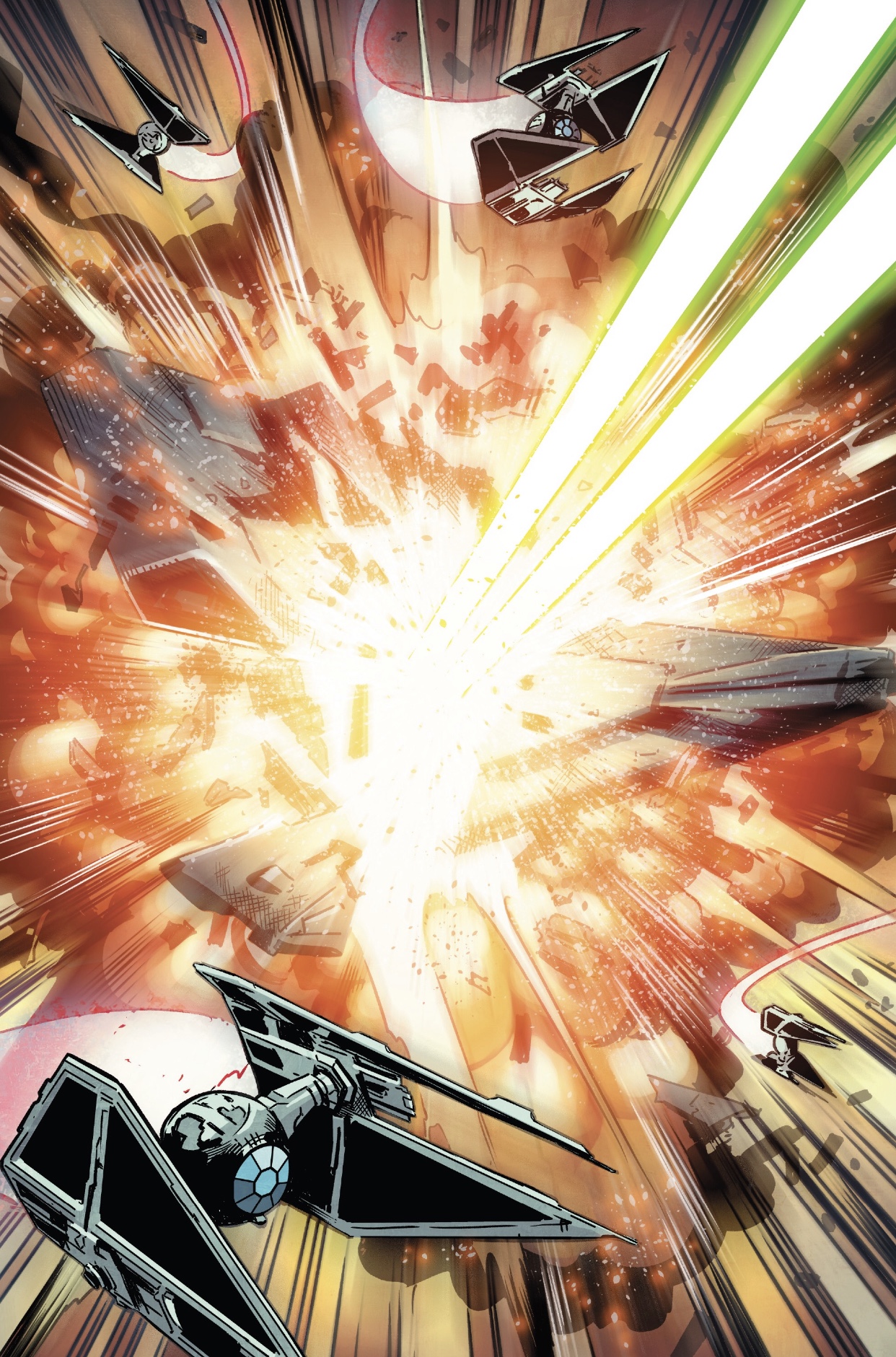 The captain should’ve heeded the warning. The Shadow Wing immediately readies for revenge and to go down in flames, but Commander Broosh overrides them and surrenders. The commander doesn’t see the sense in a senseless sacrifice while they are still breathing. He orders his squadron to descend to the planet and they arrive at an Imperial Mining Facility. 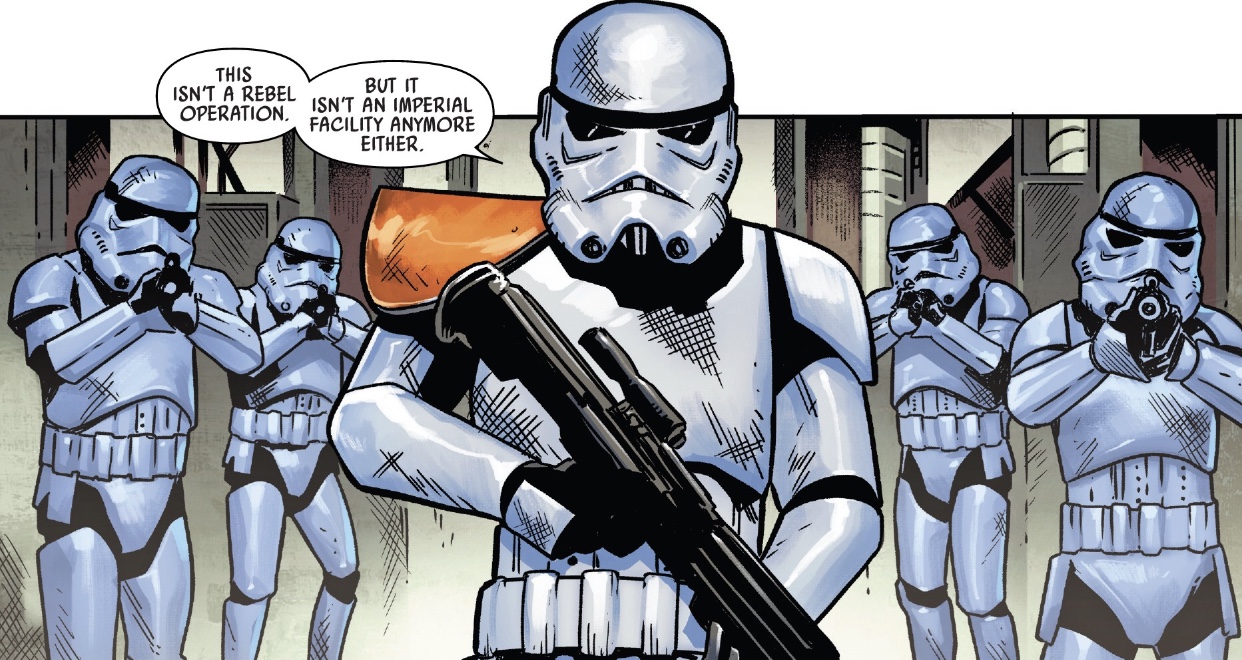 After Ganem mentions how strange it is to see “Rebel scum” in Stormtrooper armor, the bucket heads declare they aren’t with the Rebel Alliance. I didn’t suspect they were and I’m surprised Shadow Wing made that assumption. Not saying I had any specific predictions about who was behind the TIE-on-TIE attack, but I figured the Rebels would use their own ships. The Shadow Wing pilots are taken before an Imperial officer – or so he presents himself as such – called Admiral Gratloe. Gratloe declares that he’s devoted his life to the Empire and since the destruction of the second Death Star he’s decided to take what resources he had domain over and make them his, effectively abandoning the Empire. He’s not interested in joining the remnants of the Empire or the Republic the Rebel Alliance will eventually form. For Gratloe, he only sees an endless war and is much more interested in getting rich off the mining facility he claims. He’s also not interested in taking prisoners, so he gives Shadow Wing a choice: join his contingency and get rich or die. 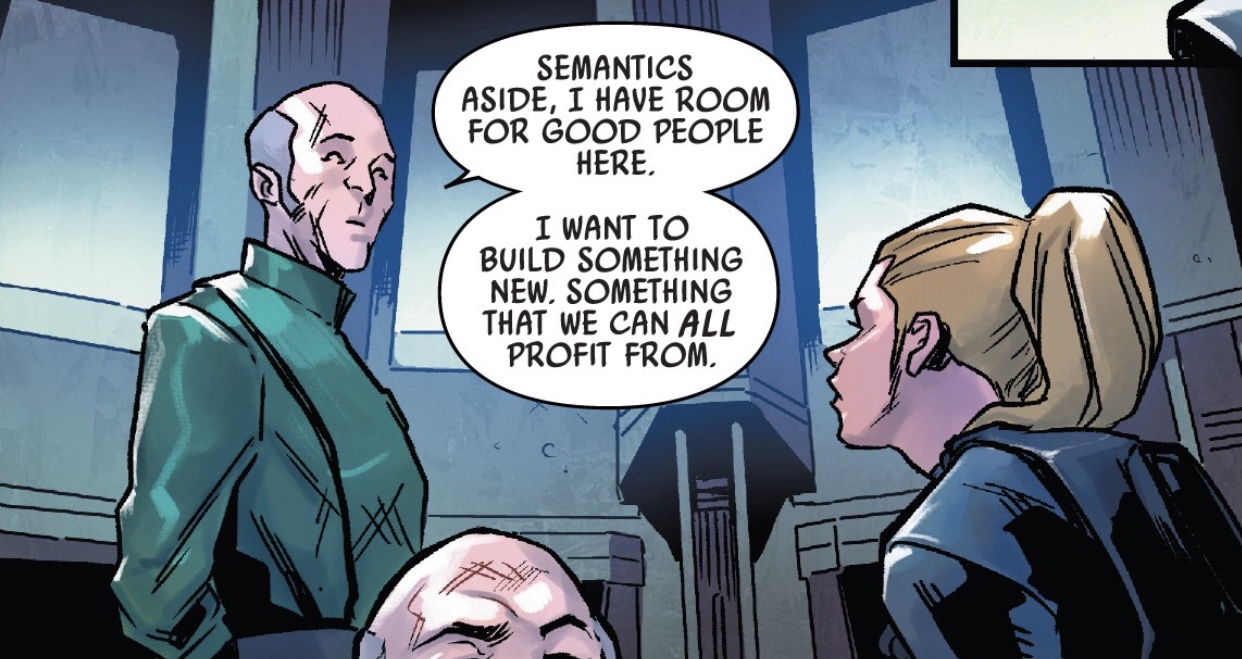 Gratloe doesn’t so much give them an ultimatum as much as he tries to convince them. He strikes me as a cold, greedy old man who reached the end of his will to serve long ago and has been biding his time to fulfill his worst impulses. The admiral still fancies himself as such and has convinced those officers under him to follow along in his footsteps. In the midst of social revolution and in the waning years of terrible galactic civil war, it’s not surprising some Imperials would defect to their own pathetic aspirations of personal fortune, rather than face the whatever tribunals the Rebel Alliance had waiting for them or join the likely doomed Imperial Navy. Gratloe also sees Shadow Wing as a valuable asset he could add to his mining facility, TIE Fighter compliment, and Star Destroyer. The admiral is building himself a nice little security force in the Kudo System. Ganem has a pretty great line to put Gratloe in his place, “Rebels may be murderous traitors, but misled as they are…at least they believe in something”. Shadow Wing is taken to a cell and given the evening to consider the admiral’s proposal.

Jeela is not planning sitting still, though. Broosh reminds everyone they are still Imperial officers and the whole reason the Star Destroyer was there in the first place was to put down Gratloe and retain control of the mining. The commander points out these are badly needed resources for the wounded Imperial Fleet. It appears writer Jody House is making Jeela the badass of Shadow Wing and I think she’s a perfect choice.  She takes out the guards with no problem and frees the rest of her fellow officers. 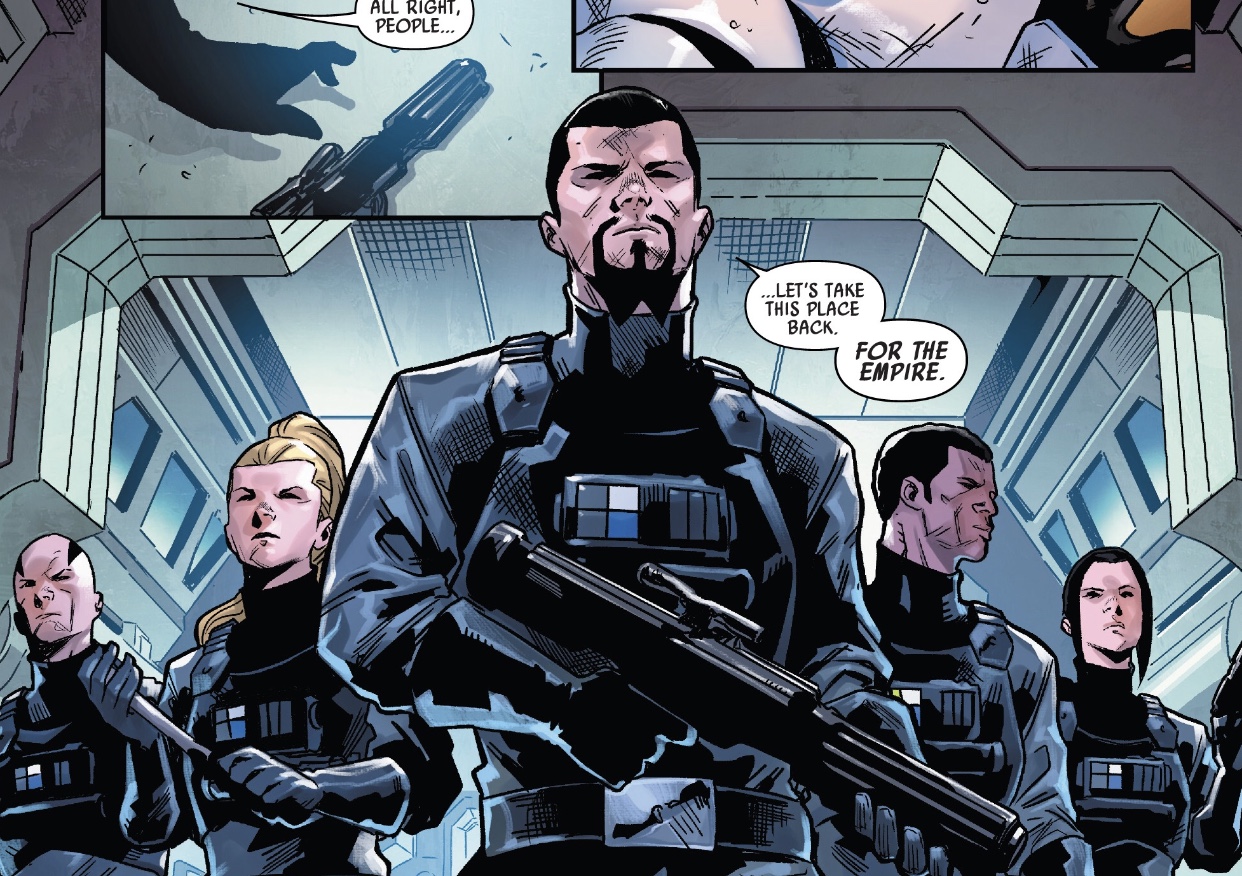 Shadow Wing is on the move. Somehow I don’t think Admiral Gratloe is going to fare well against these five but I don’t think he’ll go down without a fight. There are significant forces they are up against, so expect this already rapid cadence of storytelling to move into hyperspace for the action. Houser never ceases to amaze me with her ability to handle a variety of different narratives – she can write long character pieces, as well as fast-moving action, and does both so good. The art by Rogé Antônio, Josh Cassara, with colorists Arif Prianto and Meeraj Menon, really opens up the scope of Houser’s story. 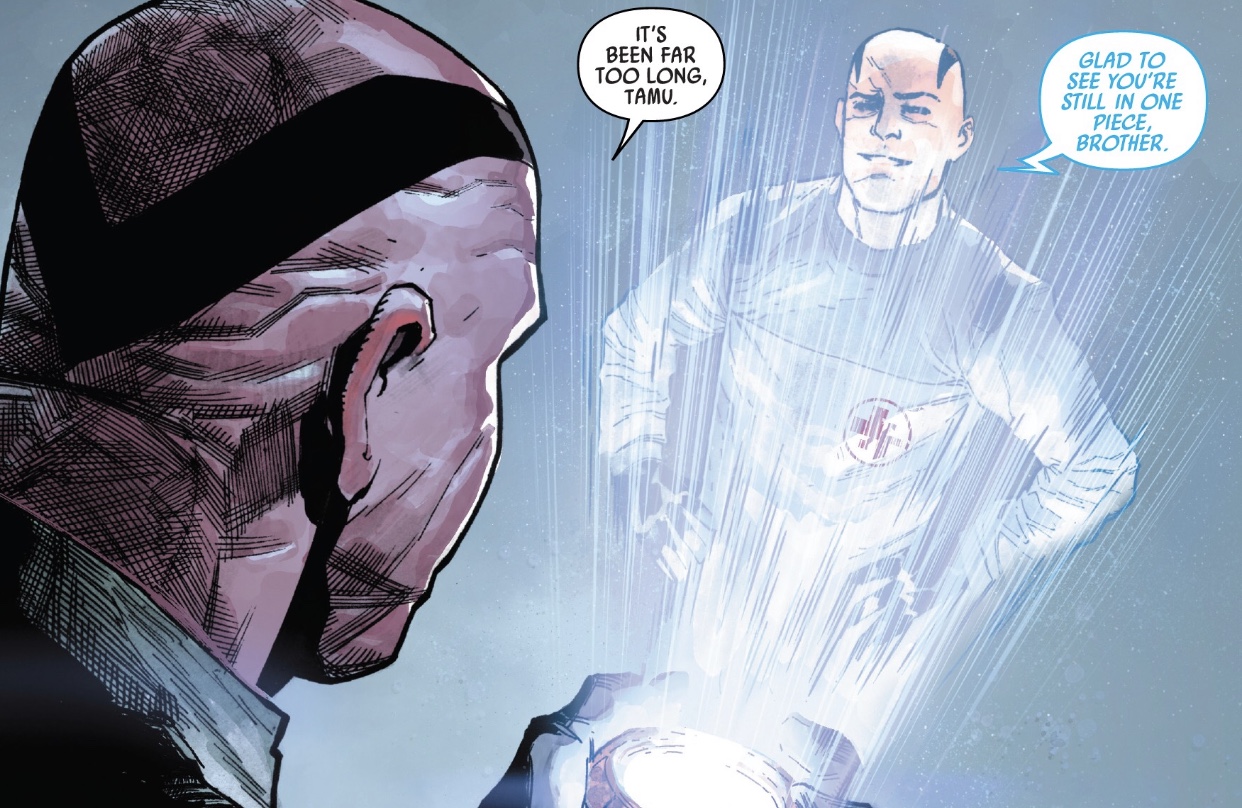 There’s also a great callback to the Han Solo: Imperial Cadet series which featured a pair of brothers, Lyttan and Tamu Dree. So far, each issue has featured a personal and more quite moment for each member of the squad. This is a really nice moment between two brothers, separated by war and distance. I enjoy the humanity it adds to these pilots and a shared humanity amongst officers in the Empire. Sometimes we forget that humanity when we watch Star Destroyers and Death Stars explode. It’s good to remember the Rebels are fighting to end the war but many people fighting against them were just as scared and uncertain. I hope these personal epilogues to each issue continue. It’s a really nice touch.

I’m very impressed with TIE Fighter so far and there’s no reason to doubt it’s only going to get better. The fact Houser is writing a story that will connect directly to Alexander Freed’s Alphabet Squadron only adds to the enjoyment of the story. TIE Fighter would be excellent as a series all its own but I can’t wait to see how it fits into the dual-narrative. It’s only been two issues and I already feel invested in these characters. As the canon inches closer to more stories beyond the original trilogy, all signs point to some excellent storytelling to anticipate. TIE Fighter is certainly one of the leaders of the pack.

Also, I should note these covers by Tommy Lee Edwards are frame worthy. I look forward to them as much as I do the actual issue! 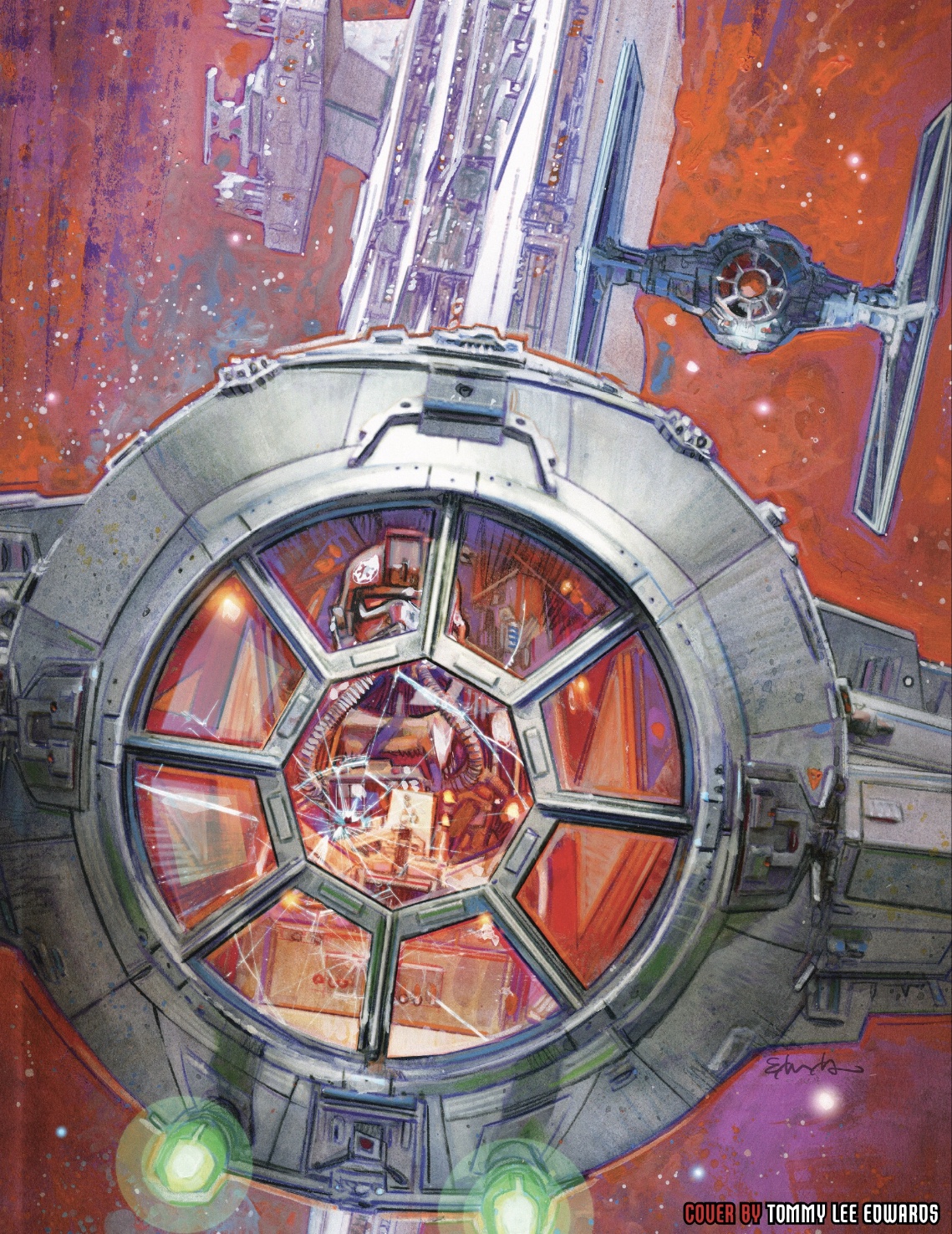