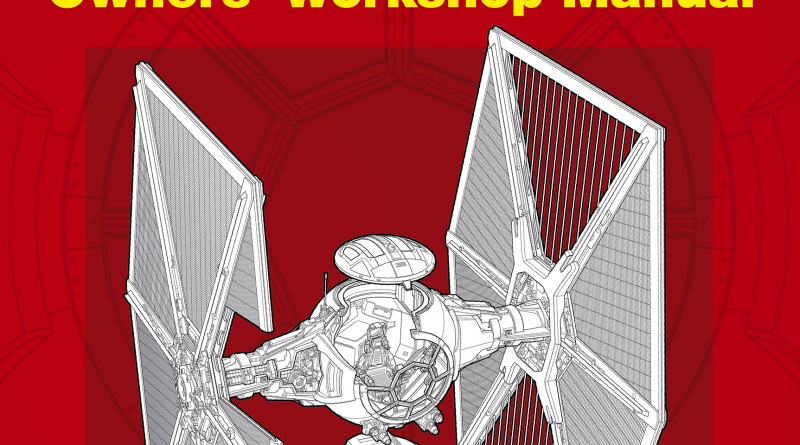 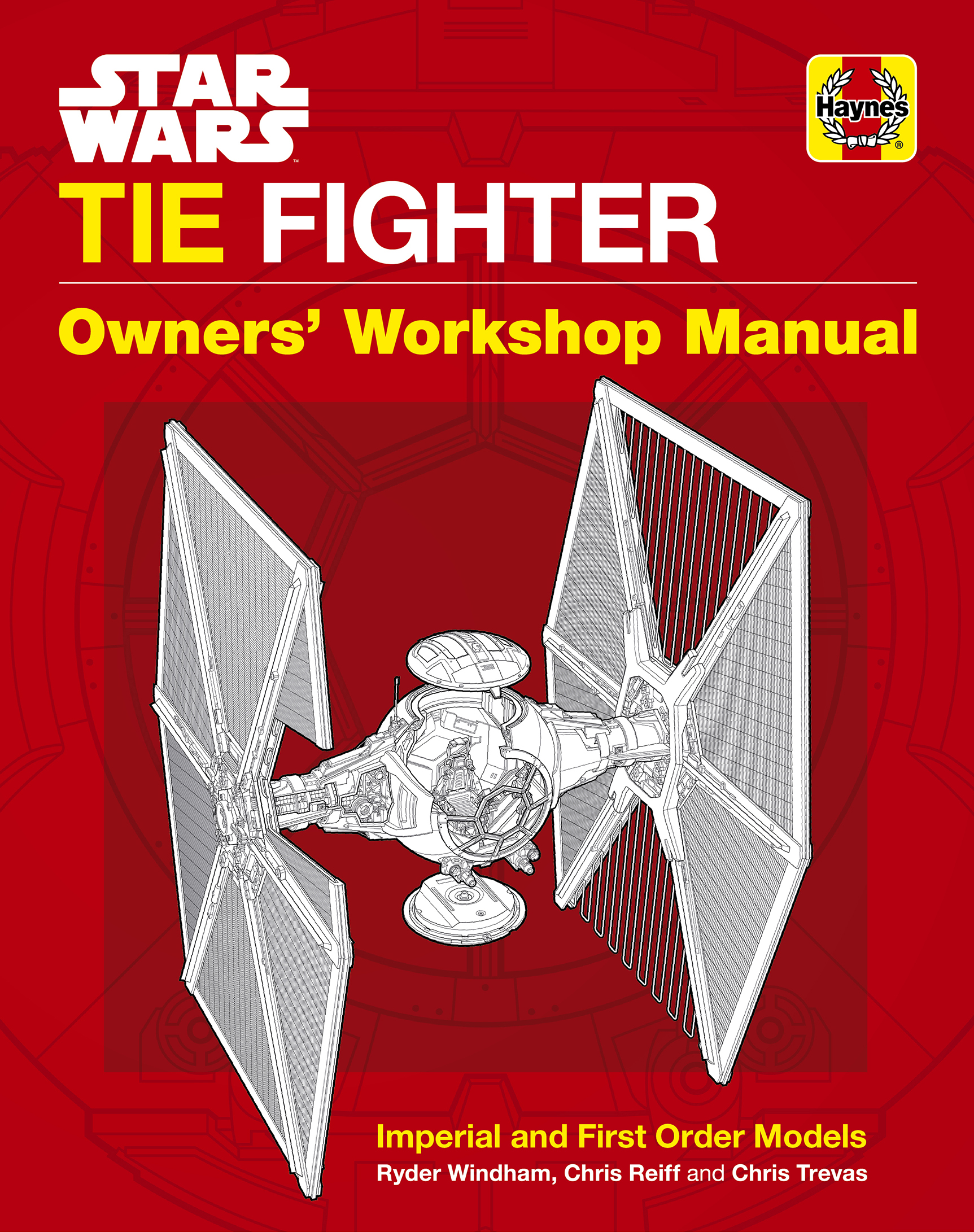 Even to the most casual of Star Wars fans, the angry roar of twin-ion engines screaming past the frame of a shot, their green turbo laser bolts relentlessly seeking the destruction of an X-wing over Scarif or one of the Death Stars inspires a certain amount of uneasiness. The TIE Fighter is easily one of the most iconic Star Wars visuals, as audiences have been accustomed to their symbolic appearance of an Empire on the march to quash freedom and hope. The folks at Insight Editions have partnered with Haynes Manuals (known for their automotive technical manuals) and delivered one of the most comprehensive looks at this terror-inspiring ship. It’s a beauty of a book, so come along with me as we have a look under the hood of this legendary starfighter. 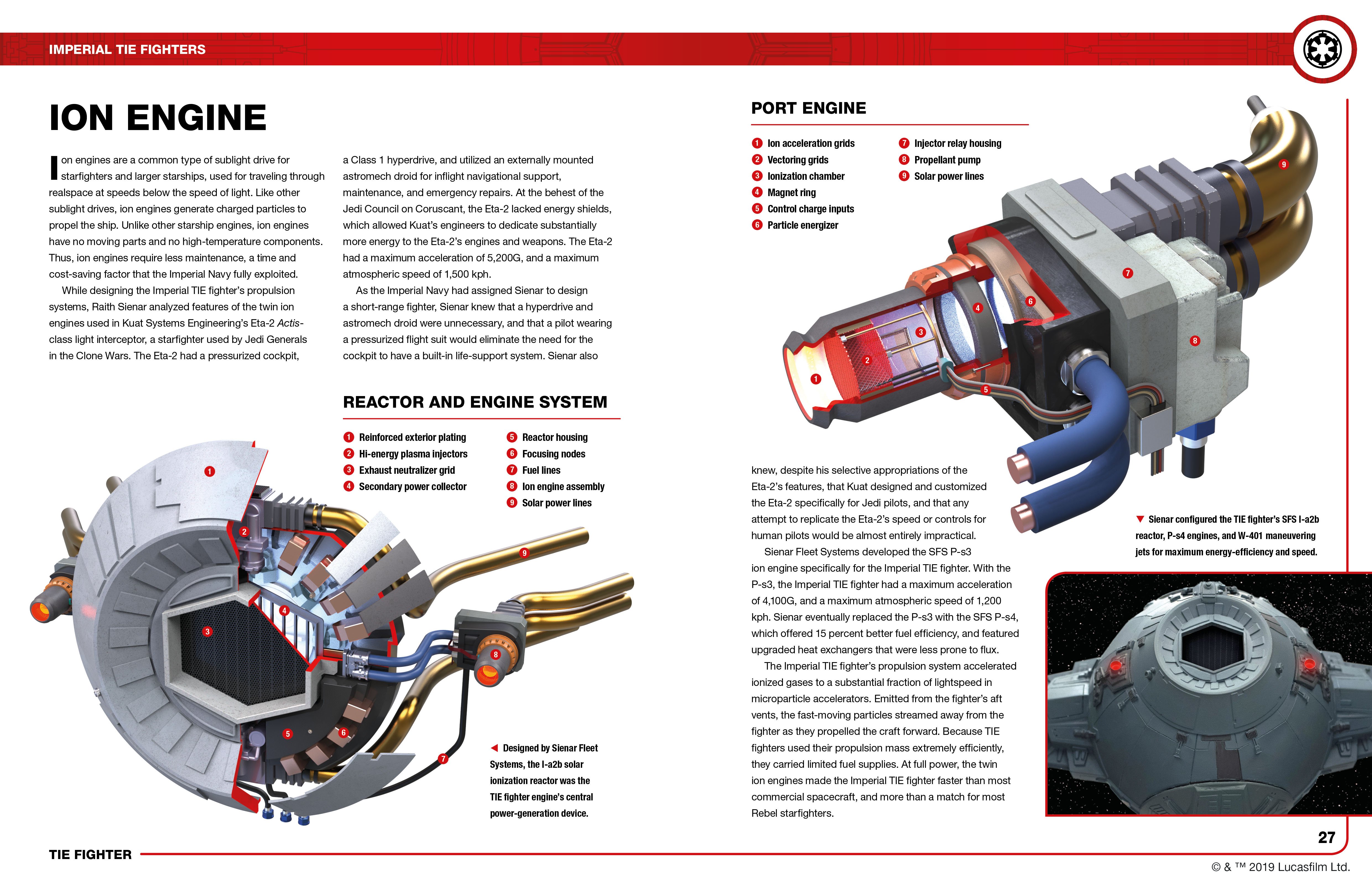 TIE is actually an acronym for “twin ion engines” of the TIE Fighter, which we learn are a testament to the Empire’s brutal economic precision in enforcing their totalitarian regime. TIE Fighter: Owners’ Workshop Manual starts off with a quick history lesson of how these ships came to be. Raith Sienar founded Sienar Fleet Systems in the era of the Republic and dedicated his resources to the besieged democracy during the Clone Wars. After Palpatine’s reformation of the systems into the first Galactic Empire, Grand Moff Wilhuff Tarkin (a personal friend of Sienar’s) tasked the Sienar shipyards with manufacturing a short-range fighter for the Empire. It needed to be economically viable to produce en masse, as well as efficient and deadly. Raith Sienar personally designed the early prototypes and the TIE Fighter was born. This book provides as much historical context on these ships as it does diagrams to display the intricacies of what goes on to make these crafts so formidable against enemies of the Empire, and eventually, the First Order. 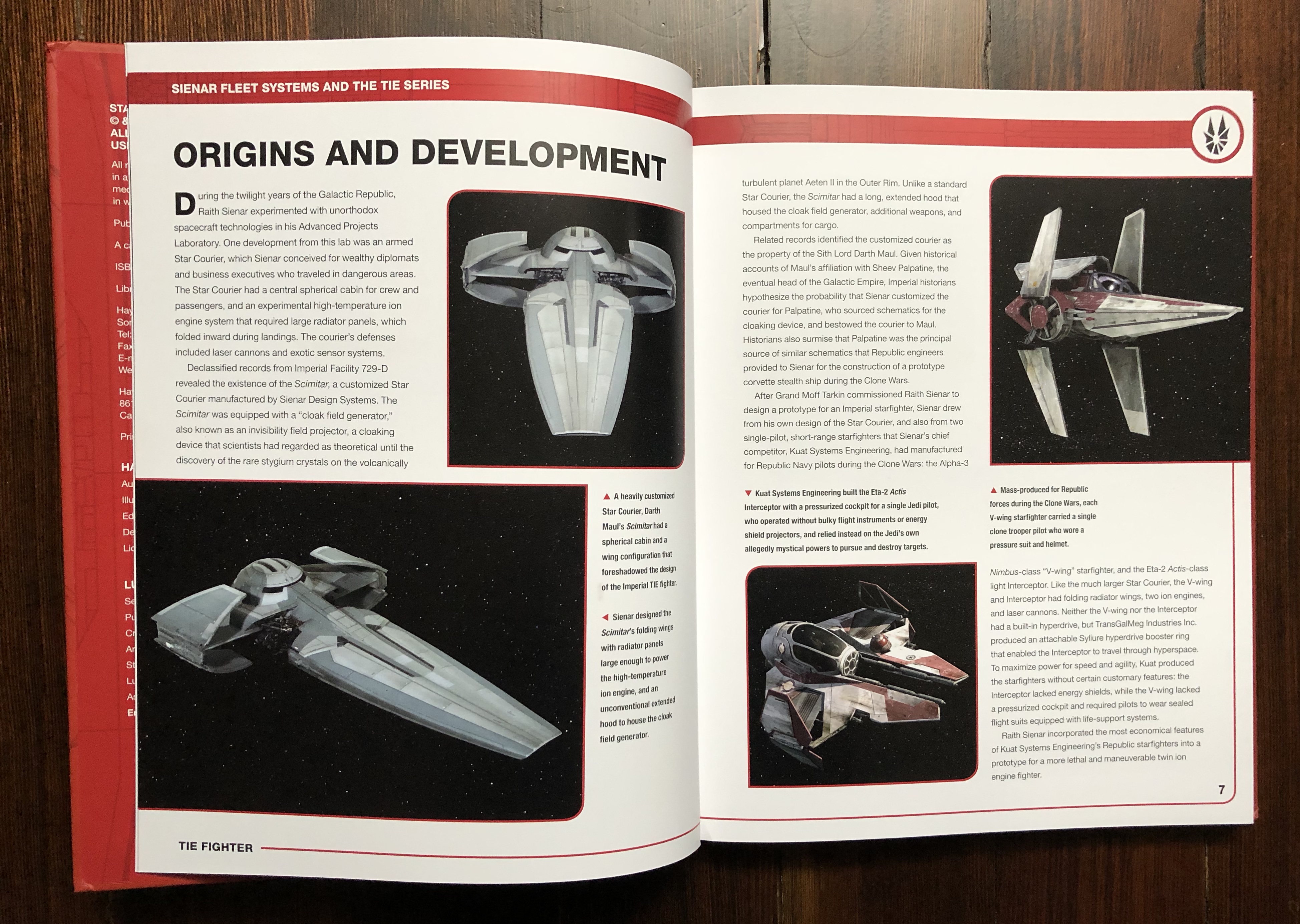 The book goes right to the origin of the design with Darth Maul’s Scimitar and also how designs evolved through the Republic-era. Author Ryder Windham does a great job of contextualizing each evolution with the historical events in the galaxy which made the revisions necessary. I’m not a huge fan of technical reading but Windham does a great job of tying the technical specifications and information to story events, which helped a simpleton like me retain the information and keep turning the pages to learn more. 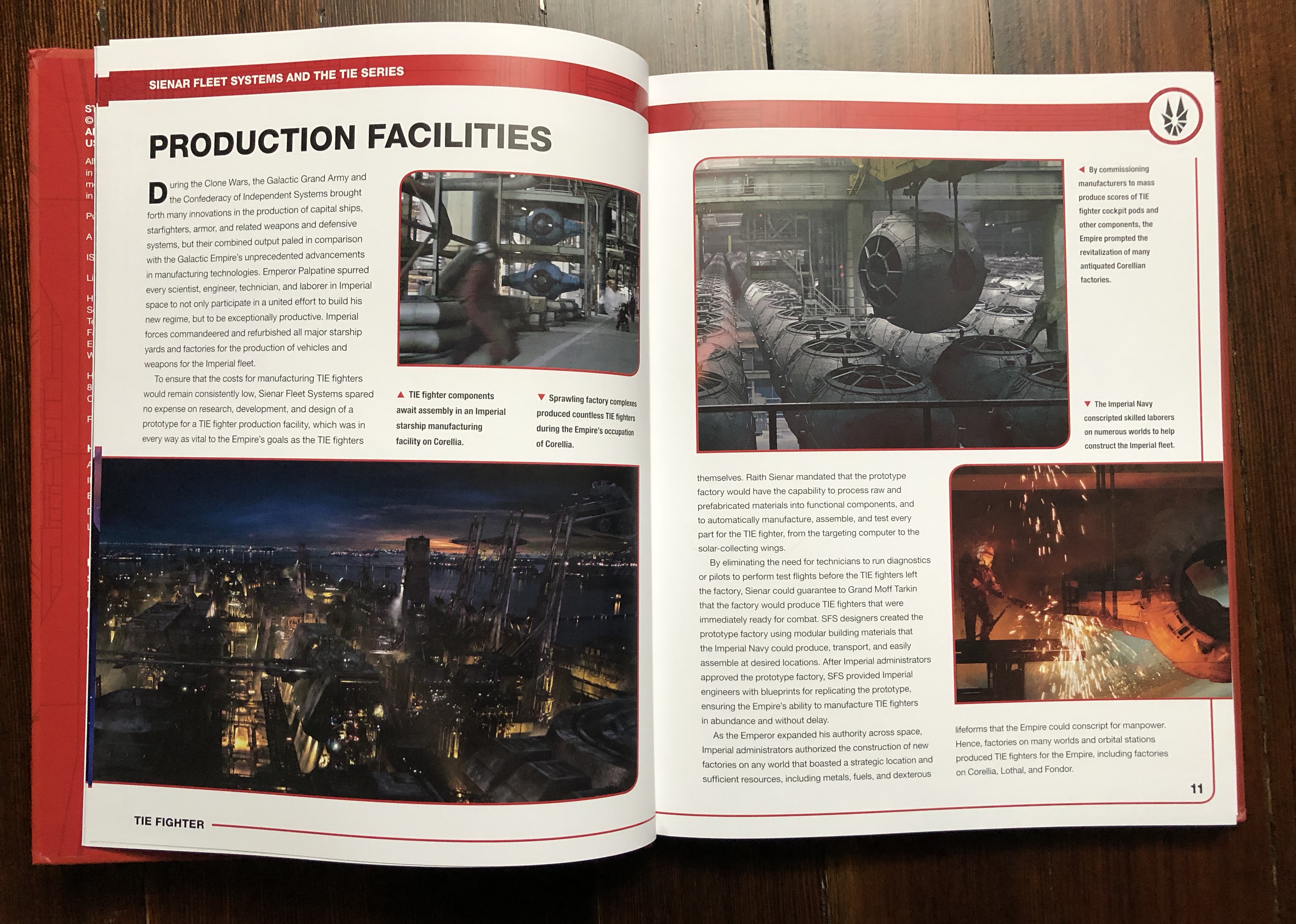 Not only do we get voluminous information about the technical capabilities surrounding each model of TIE Fighter, we also get a look at what resources around the galaxy were poured into their production. Though TIE Fighters were reasonably cheap to manufacture, shipyards and R&D facilities were sprinkled across the galaxy and afforded considerable resources by the Empire and Raith Sienar. This is a bit off-topic but I’d love a story about Raith Sienar or to have him pop-up in stories of the original trilogy era. This titan of Imperial industry sounds like a fascinating character and it’s speculated he personally designed Tarkin’s Carrion Spike and Sheev Palpatine’s Imperialis. I imagine he had dealings with a certain Grand Admiral, as well. 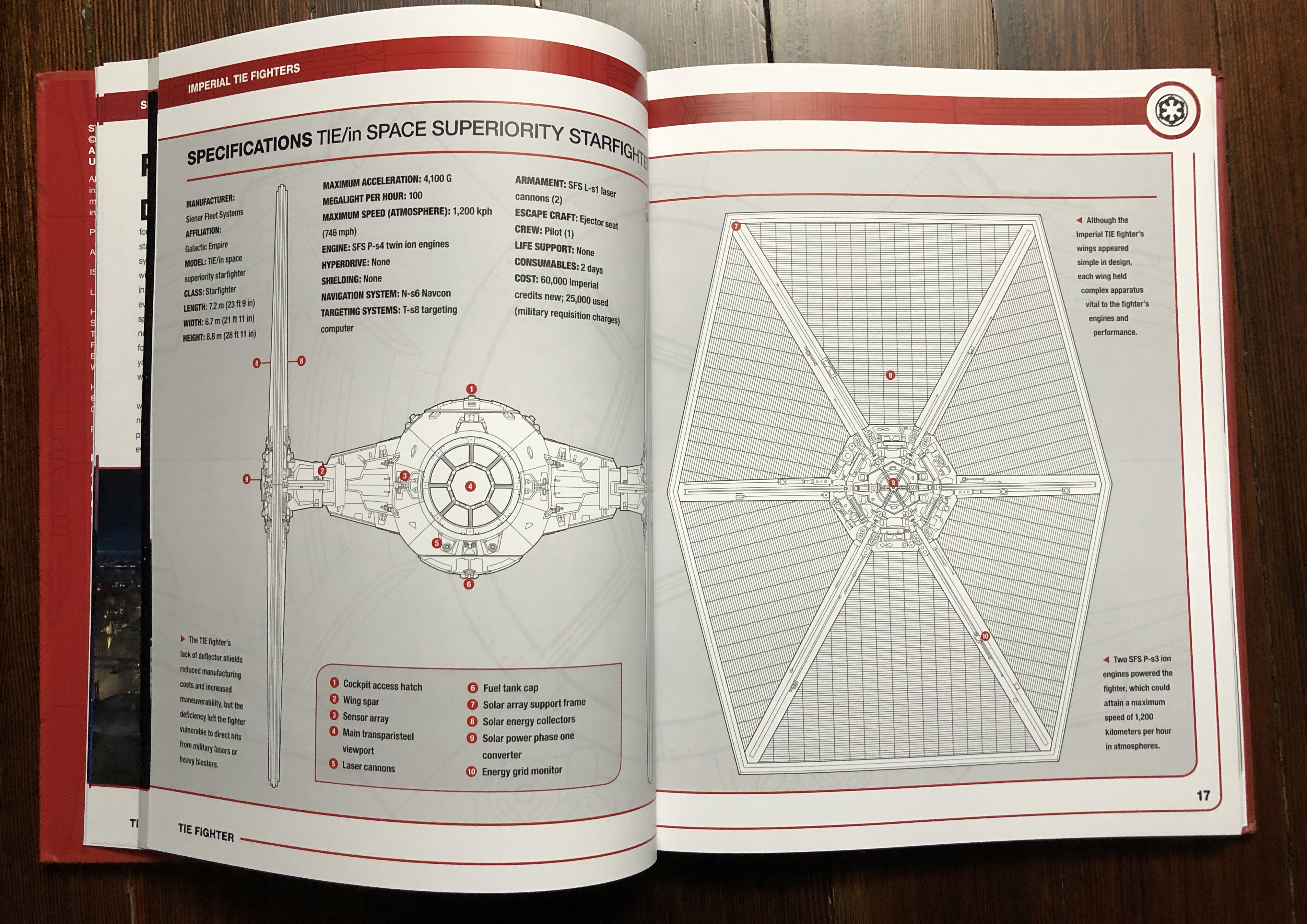 The artwork and technical diagrams by Chris Reiff and Chris Trevas are excellent. This book may sound a bit dry to those not into technical manuals but I promise the work of Reiff and Trevas is a visual feast. TIE Fighter: Owners’ Workshop Manual maintains the high-bar Insight Editions has set with all of their books. The collection of diagrams, artwork, and photos from the various Star Wars media will certainly keep any fans attention. This book is gorgeous and it’s fun to flip through it. Reiff and Trevas have made use of so many different eras and their love of Star Wars comes through. 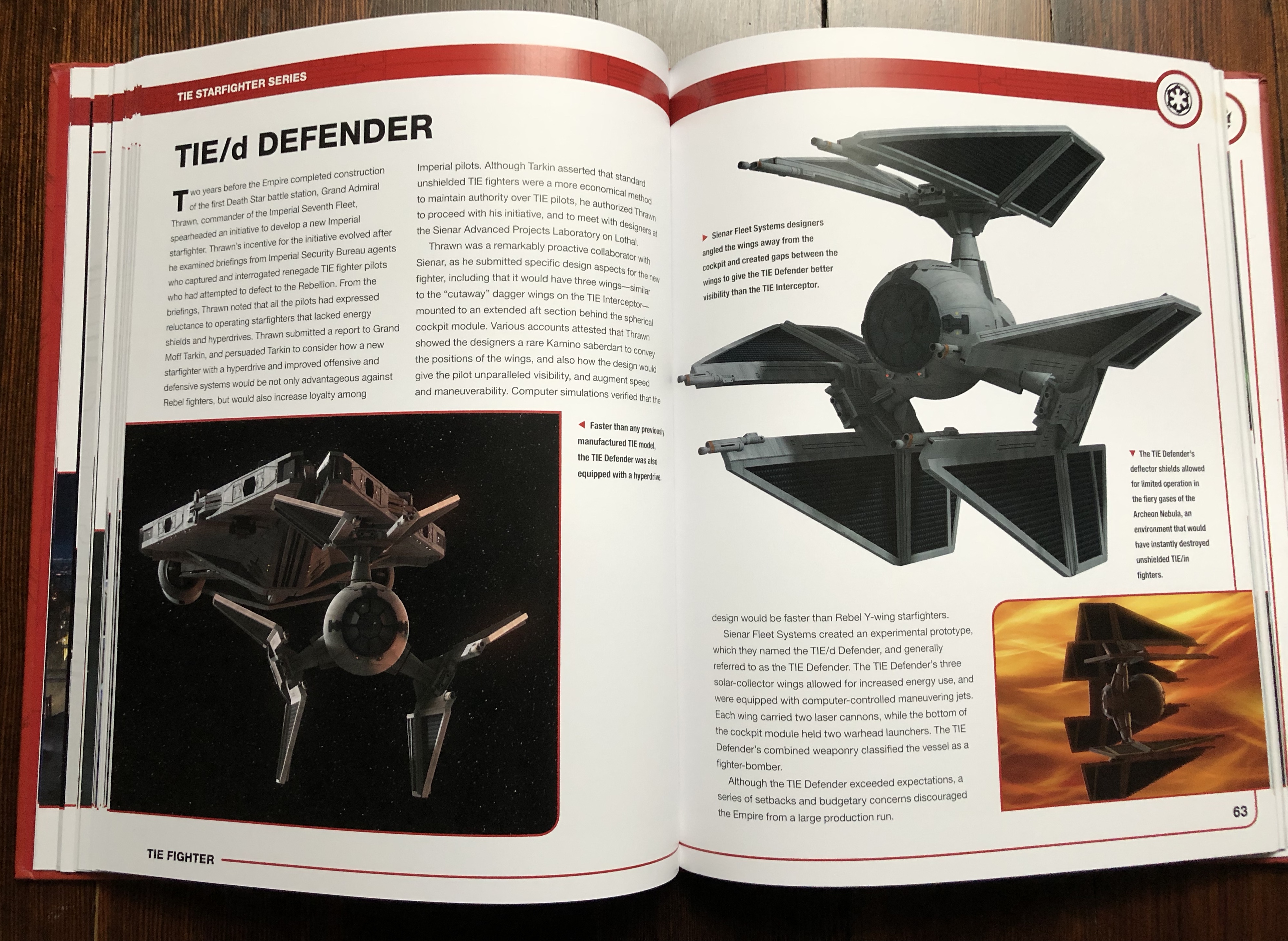 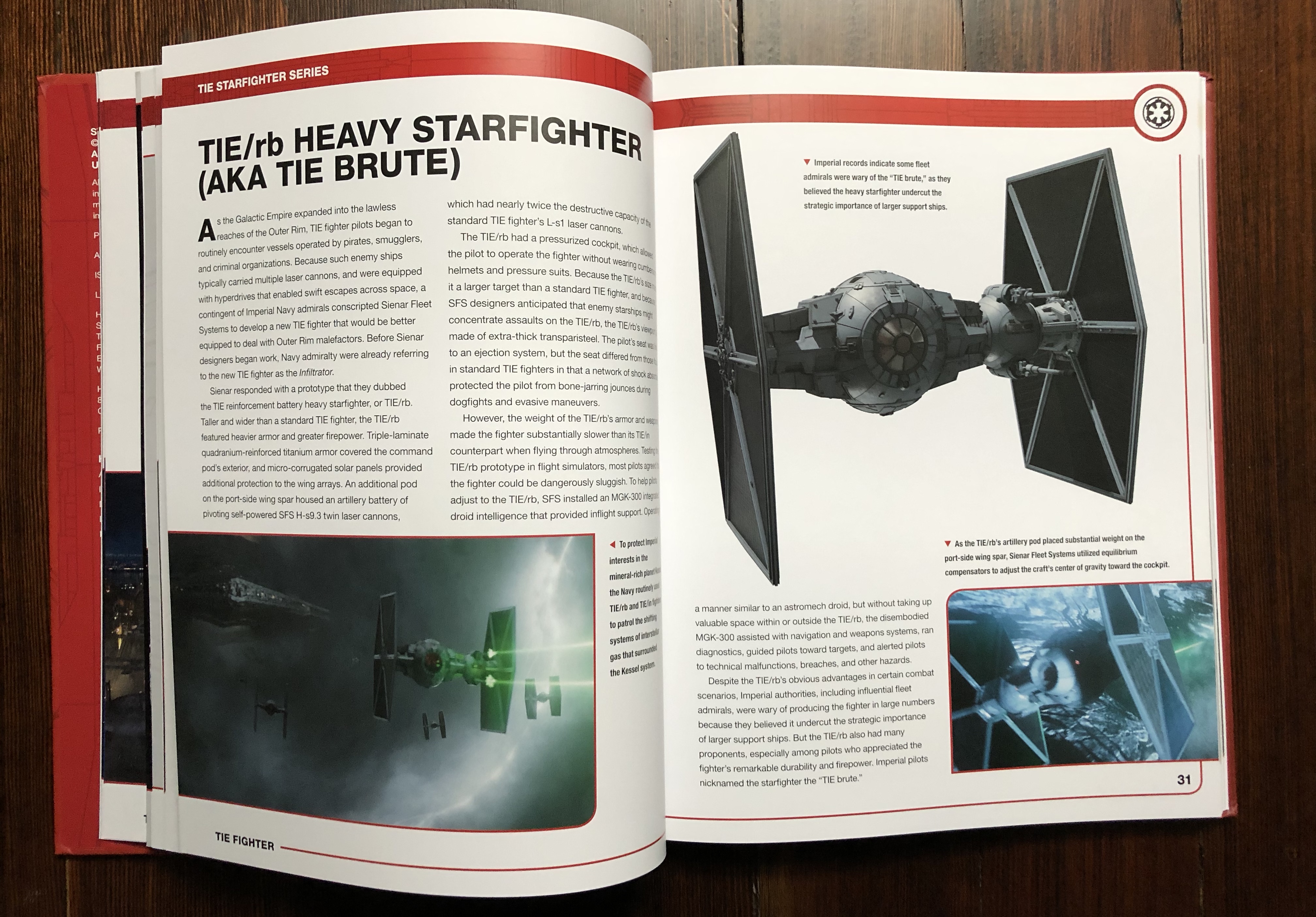 And for those who want to nitpick – and there’s nothing wrong with that – even the most obscure of TIE models are explained. The TIE/rb Heavy Starfighter was barely onscreen in Solo, but it’s given the same love other more prolific models are. The differences of each model are highlighted. As the reader peruses the technical text you start to get more of a sense of the specificity each craft and why they showed up in specific scenes or settings in the Star Wars franchise. I wouldn’t exactly call this a retcon, as I know a lot of people (myself included) got antsy at the inexplicableness of so many new designs showing up in Rogue One and Rebels when we never got a glimpse of them in the original trilogy. The Empire deployed their fleet with specificity to highlight each model’s utilitarian design. It’s not a perfect way to sort out my head-cannon but it certainly helps. 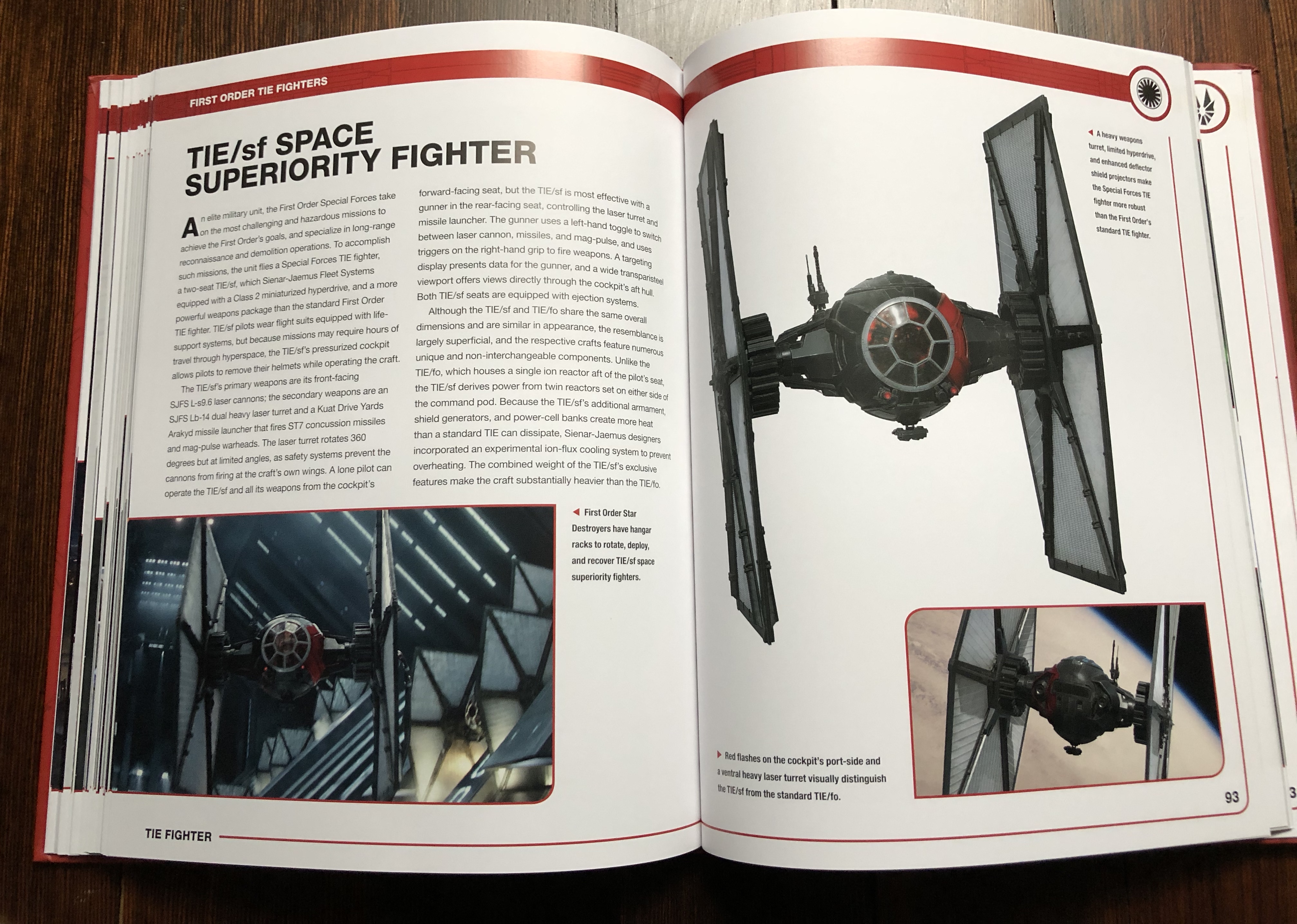 The evolution of the TIE Fighter doesn’t end with the Empire – it goes all they way into the First Order. Ryder Windham’s authorship of TIE Fighter: Owners’ Workshop Manual really shines when he prefaces the First Order section of the book by a quoted speech from General Armitage Hux himself, given on the fifty-second anniversary of Empire Day. It’s the first time it’s appeared in canon and a chilling way to assert the First Order is even deadlier and more merciless than the ashes of the dreaded Empire it rose from. Here’s an excerpt:

There was a time when citizens of the galaxy obeyed rules of conduct and respected military power. They obeyed because they knew if they did not, Star Destroyers would arrive in orbit of their worlds. And those same Star Destroyers would unleash scores of TIE fighters, which would rain down upon every city and homestead, and reduce all to ruins.

Count me among fans who want to see General Hux get his fangs back in The Rise of Skywalker this December. The First Order expectedly improved upon every design of the Empire’s fleet, optimizing the solar-charged power cells (the wings of each TIE are essentially solar collectors), providing them with advanced deflector shields, and also making them able to fly consistently smooth through even the most turbulent parts of the galaxy. They sound like the epitome of refinement of an already thorough and precise design. There’s several reasons listed I imagine explain why Poe Dameron always wanted to fly a TIE Fighter. 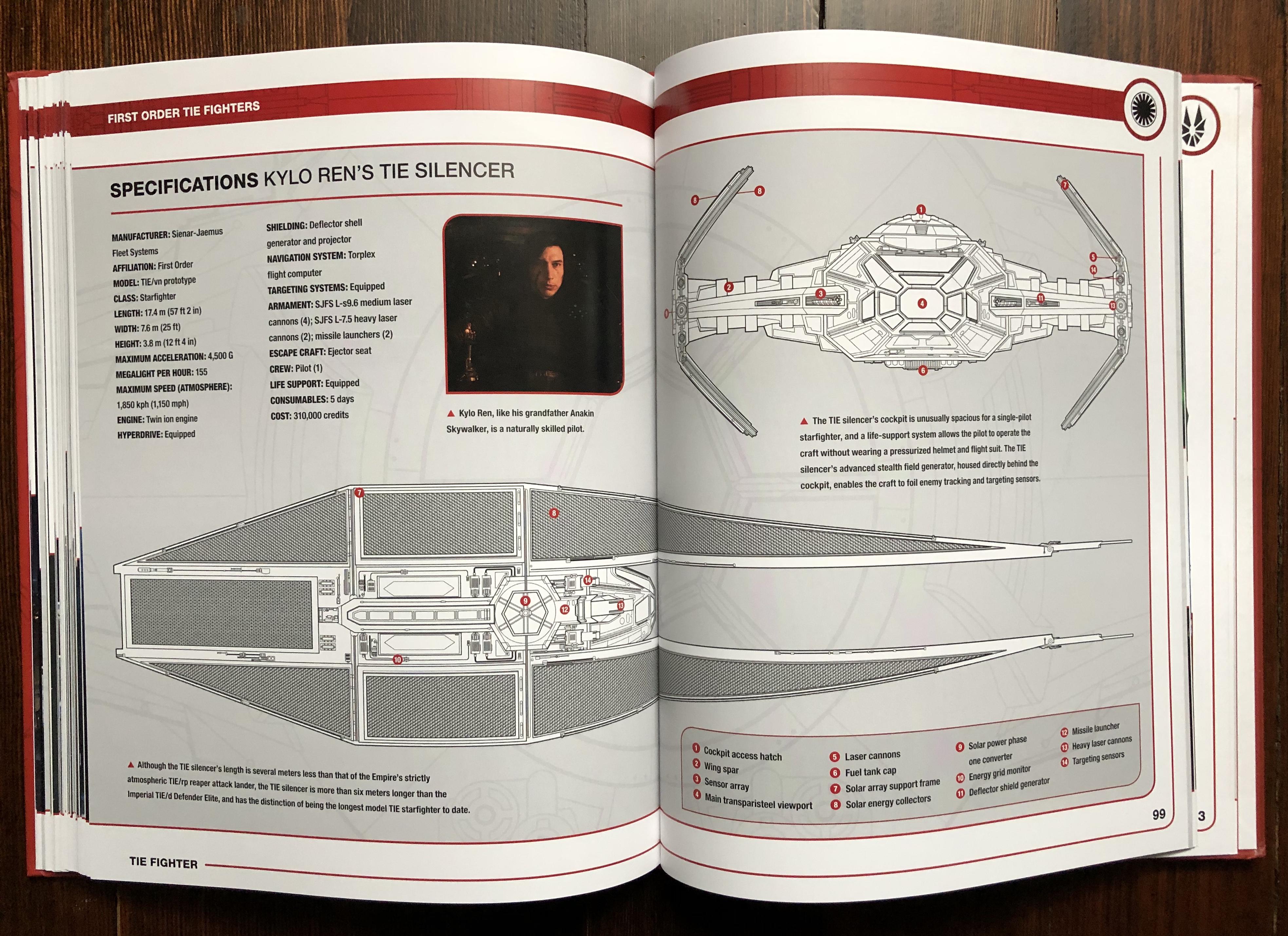 One interesting tidbit about the TIE Silencer used by Kylo Ren in The Last Jedi: It was a prototype he was in the process of testing for the Sienar-Jaemus Fleet Systems (this manufacturer name change is never explained, but they were the chief manufacturer of the First Order’s weapons) and once the kinks were ironed out it would go into mass-production for the First Order fleet. I’ll take that as an unintended explanation as to the altered version of Kylo’s ship we glimpsed in The Rise of Skywalker trailer and if this explanation is applied to canon, expect to see a lot more like it in those anticipated space battles of the saga’s ninth installment. Comparing it to the technical specifications of a standard TIE Fighter, it’s a much more lethal ship, so if there’s a fleet of these things searching for the remnants of the Resistance, I’d say our heroes are going to have their hands full.

TIE Fighter: Owners’ Workshop Manual is a huge contribution to Star Wars. I think fans who’ve been looking to dip their toes into the more technical literature Star Wars has to offer would do well to give this book a look. It’s beautifully laid out and certainly up to par with manuals from Haynes Publishing and Insight Editions. Author Ryder Windham does a great job of connecting all the technical details to different characters and stories. This doesn’t just cover TIE Fighter schematics, it also covers pilot training, combat tactics, maintenance, and even has a section talking about how these deadly fighters were stored and deployed across the galaxy. It’s rich in canonical detail and history, so if you’re looking for some content between novel releases and that long road to December, TIE Fighter: Owners’ Workshop Manual would be a great way to get a lot more knowledge about the Empire and First Order. Also, I have to say that the $24.99 is an absolute steal! I expected this to run between $30-$40, at least, so I’d say the price is more than fair for what you get. I really enjoyed this book and think it’s well worth your time.

Special thank you to Insight Editions for the advanced copy used in this review. Star Wars: TIE Fighter: Owners’ Workshop Manual will be available everywhere May 28th and is currently available for pre-order here and other online retailers. 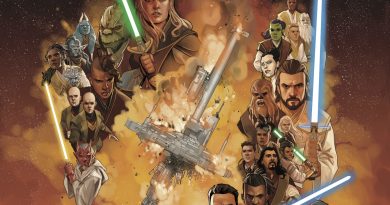 The Galaxy Goes Dark in The High Republic Starting this January 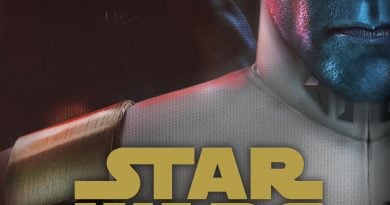 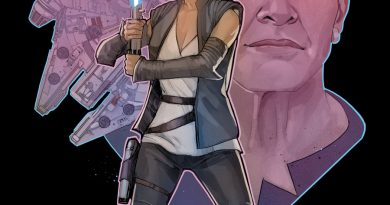 Covers And Synopses Revealed For Marvel’s Age of Resistance