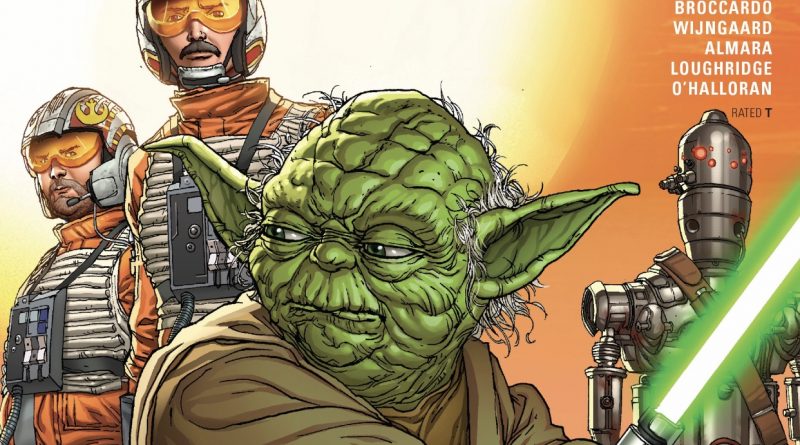 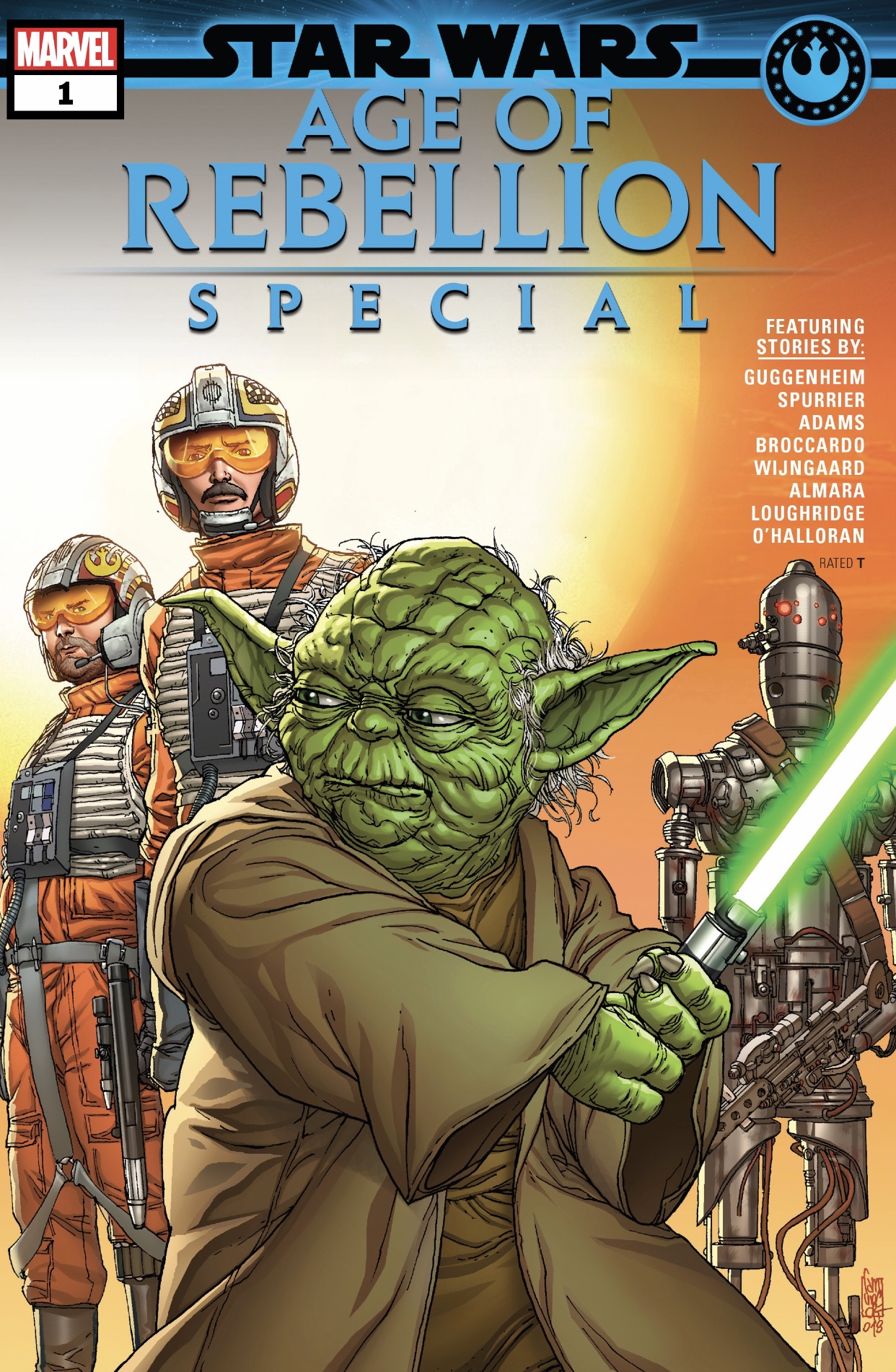 While we all take a few days to catch our collective, celebratory breath after this weekend, Marvel chugs right along with a great new special issue in their Age of Rebellion series. We are treated to three separate tales involving droid bounty hunter IG-88, Jedi Master Yoda, and two of the less heralded Rebel pilots, Porkins and Biggs. The team of writers and artists packed in an abundant collection art to tell these small stories, so the pages here have a lot of visuals while keeping these small stories relatively contained to their own corners of the galaxy, but they have a lot to say about the characters they cover. SPOILERS AHEAD…. 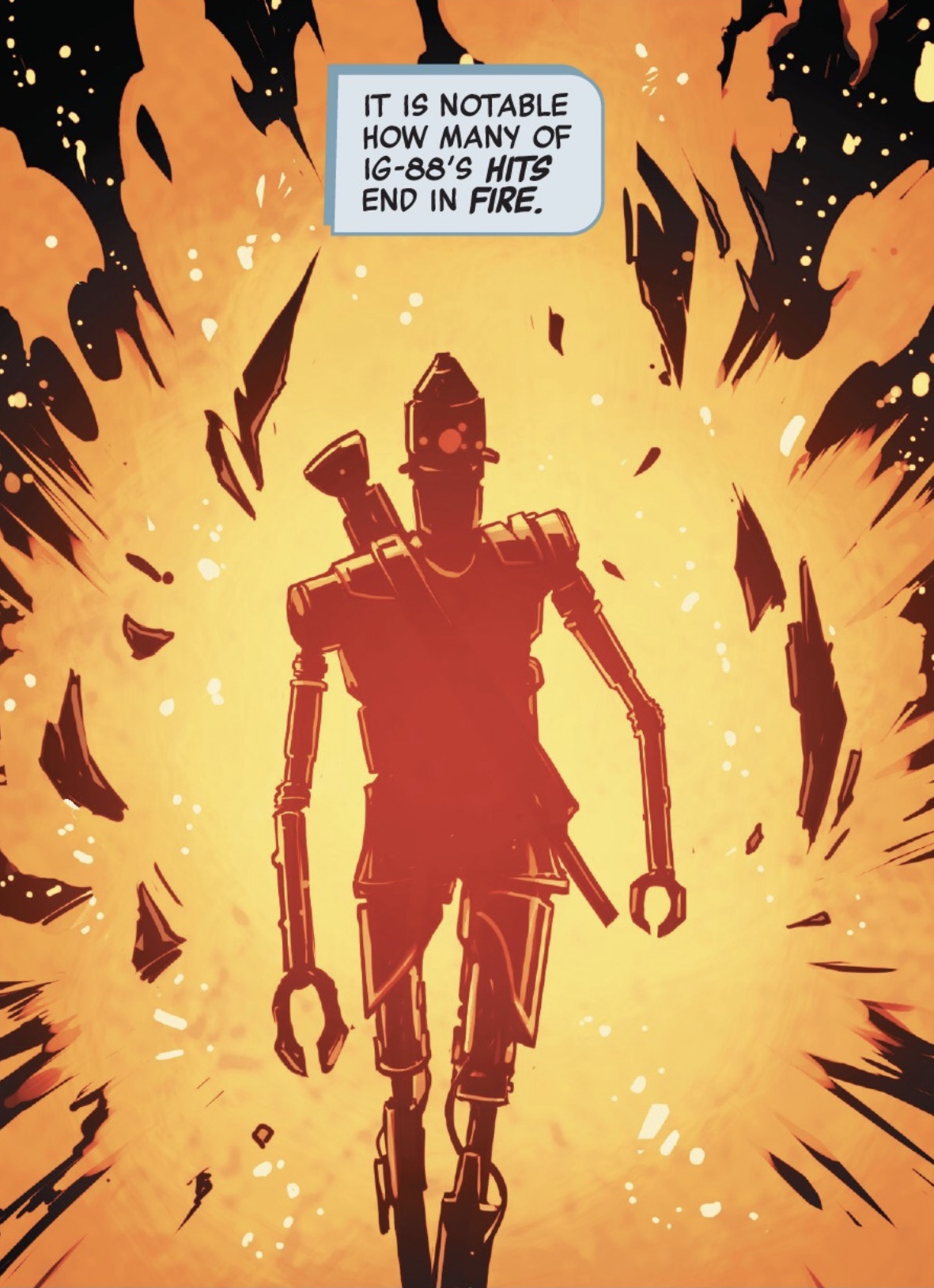 After the glimpse of The Mandalorian this weekend, I couldn’t help but think this was a way for everyone in the Lucasfilm Story Group to say, “You have no idea what’s coming”. As we know IG-88 will play a role in franchise’s first live-action television series. This story doesn’t serve much purpose other than to showcase IG-88’s deadly methods employed when the mechanical bounty hunter is on the job. We get a look into how the droid views its contracts and jobs. IG-88 seeks perfection and does not care how long it takes to achieve that. We see the droid is totally willing to abandon a job in the middle of it and scuttle everyone involved if it decides the job is not worth the risky repercussions which would proceed the job’s completion.

The story also makes a good point that IG-88 has the primary goal of gathering intelligence about the galactic underworld of a galaxy far, far away. The droid itself is void of personality or emotion but of a singular focus to exist as the most perfect version of itself – by pursuing any job that will increase its knowledge. This fascinated me and made me wonder if IG-88 will function in the Artoo capacity of The Mandalorian. Let me break that statement down a bit, as I wasn’t in the crowd of lucky folks who witnessed the trailer in Chicago this past weekend. Artoo has been involved in pretty much every pivotal moment in the Skywalker saga and knows the same story we do, from so many vantage points. Imagine if IG-88 has witnessed equally pivotal moments involving rival gangs, mercenaries, and criminal syndicates, only the droid uses that knowledge to further its own interests or those of the people its allied itself with. This could make IG-88 an invaluable resource for anyone in the galaxy trying to navigate that underworld. Just some speculation, but for such a small story its a very revealing and intriguing part of IG-88’s programming. 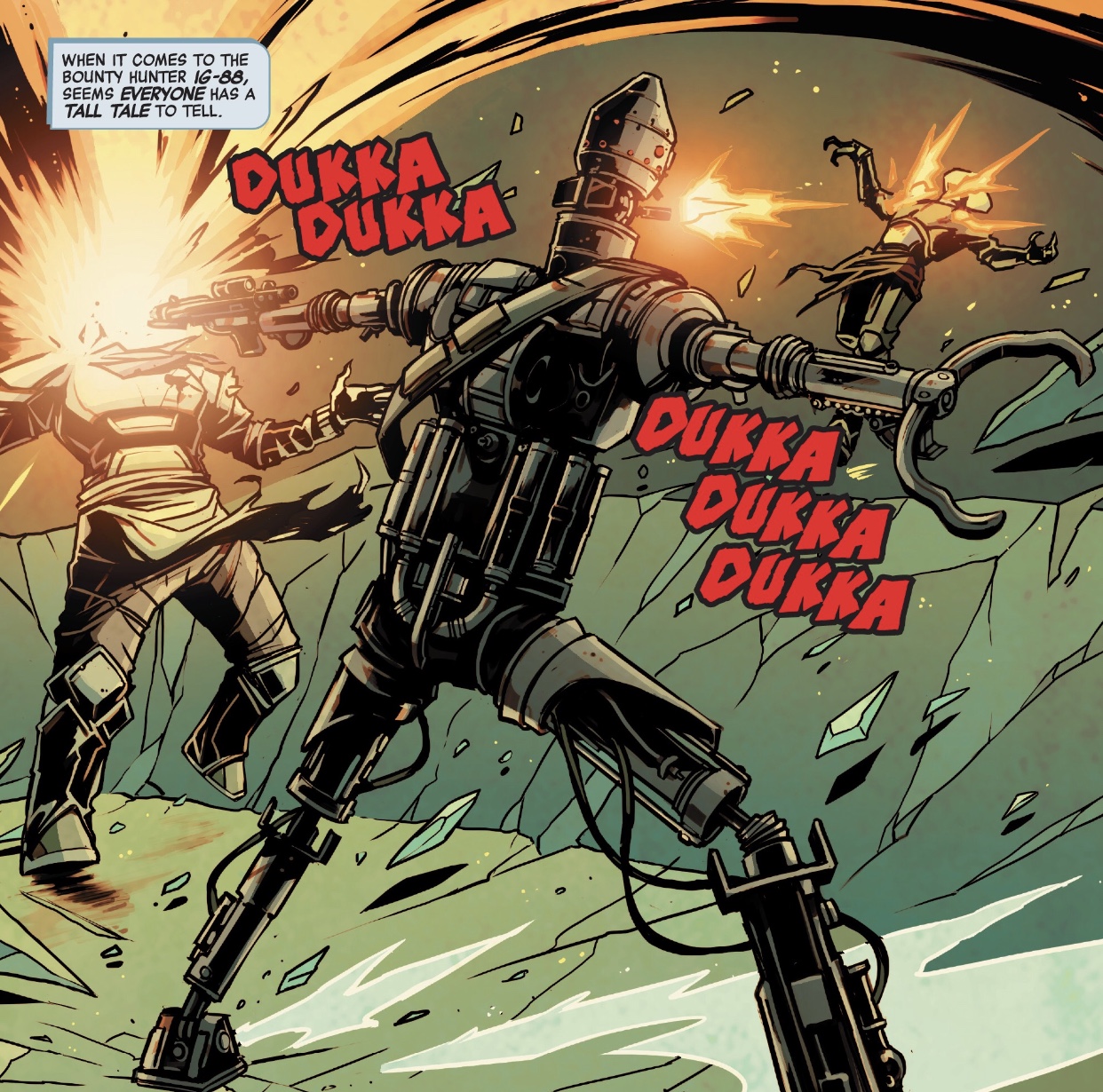 One thing is certainly established: IG-88 is a cold, effective, efficient killer that is very difficult to stop. We witness an impressive scene where the bounty hunter allows itself to be blown to pieces just so its head can infiltrate an attempted hit by a gang of thugs on a large criminal syndicate. When all the players are set in motion, IG-88 summons the rest of its reassembled body storm the attack, kill members of both the gang and the syndicate, and collect all the bounties. Writer Simon Spurrier titled this “The Long Game” for a reason – IG-88 is in a constant state of refinement regarding its ‘risk assessment’ software, so the road that got the droid bounty hunter to the conclusion of this short story lasted five years. Folks, we are going to be meeting a different kind of villain here in The Mandalorian and this peek should get us all excited. I loved this story, especially the gritty art by Caspar Wijngaard and colorist Lee Loughridge. 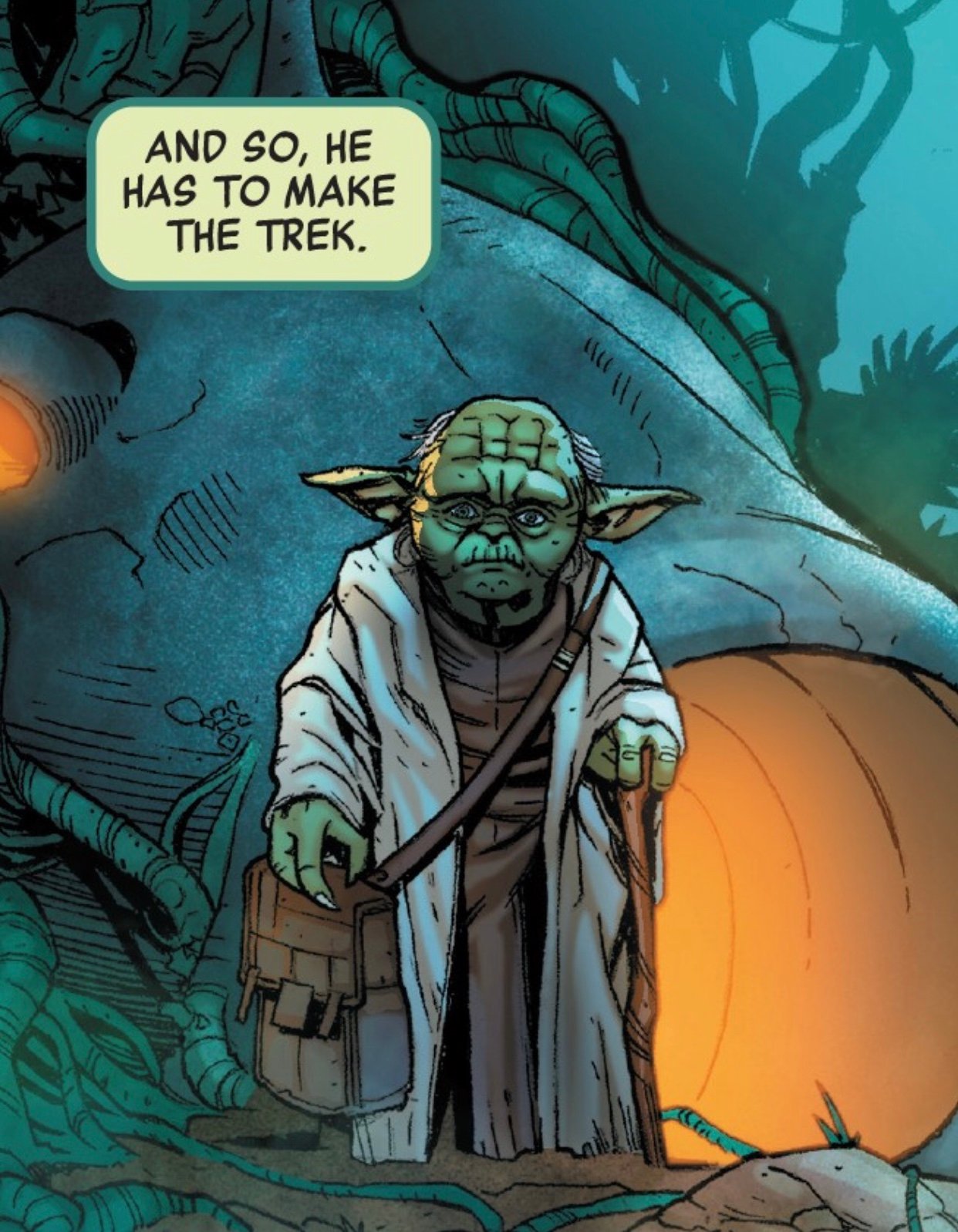 “The Trial of Dagobah” is one of the more somber, touching Star Wars stories I’ve seen in the comics. We meet Yoda, beyond the tragic events witnessed in Revenge of the Sith. The Jedi Master does not exist in a quiet, self-imposed exile as the isolation of Dagobah might expect. Because of his deep connection to the Force, every nightmare playing out in the galaxy visits the Jedi Master each night when he sleeps. That’s not to say he witnesses every specific horror, but writer Marc Guggenheim portrays our hero to be flooded by dark emotions flowing into his consciousness every night as he sleeps. What a terrible thought but it also displays Yoda’s fortitude and commitment to the Force. When the issue opens, Yoda has just awoken to find his food supplies low, which leads him to leave his hut to hunt for wild game. Perhaps this constant flood of darkness is one of the reasons Luke will eventually cut himself off from the Force in the future. 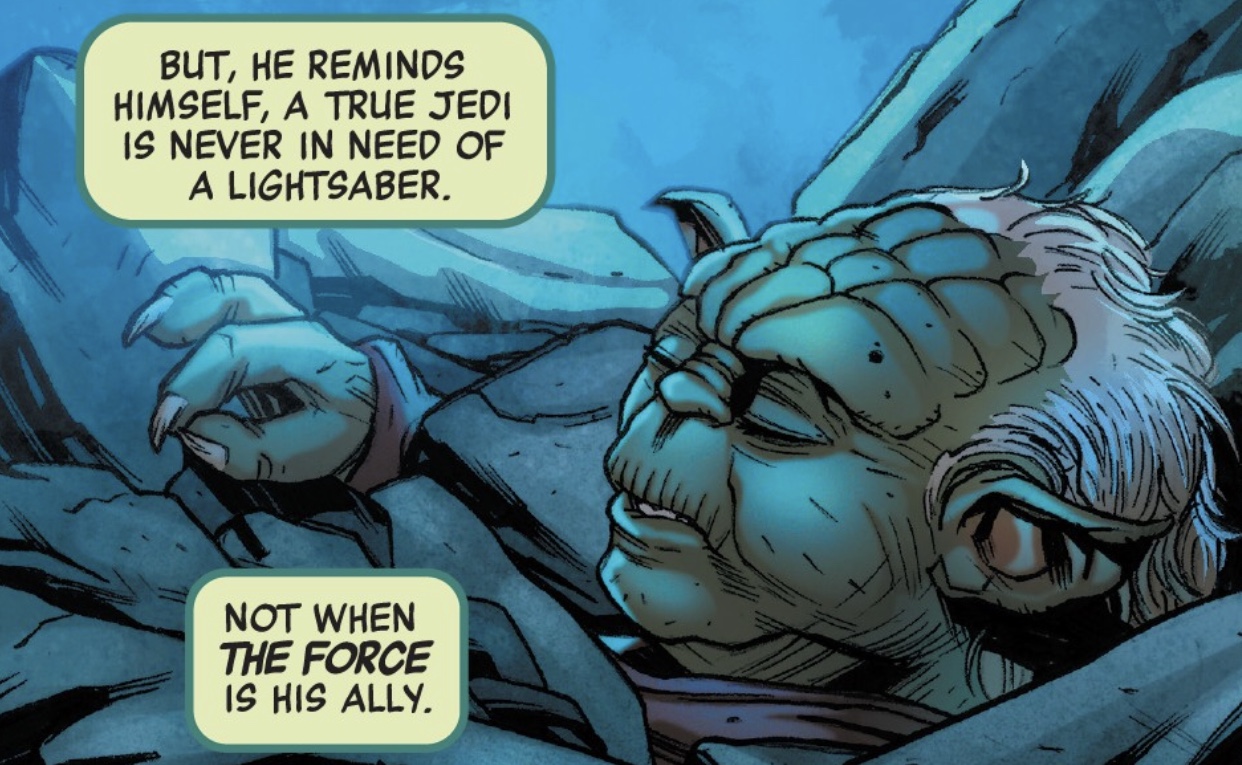 The sense of solitude and isolation permeates this issue and made me very sad. I always thought Yoda immersed himself in the light of the Force during his time on Dagobah but his disconnection from the rest of the galaxy was as forlorn as Obi-Wan on Tatooine and even Luke’s eventual retreat to Ahch-To. This is a Jedi Master who feels he failed the galaxy and lives a life in the absence of an order he gave his nine-hundred-year-old life to. Yoda’s presence projects grief and sorrow, thanks to the beautiful and haunting art by Andre Broccardo and colorist Dono Sánchez-Almara and every step he takes is that of a wounded being, both suffering to find a path forward physically and emotionally. At this point, he is the last Jedi, and he’s not sure what to do with that terrible realization. Yoda’s arduous journey comes to a head when a cliff he stands upon collapses, leaving him buried alive. I posted the above frame to remind us all of Yoda’s most important lesson and one that continues to highlight the saga: The Force is a Jedi’s ally, not their lightsaber.

This story is a huge watershed moment for the Jedi Master. As he’s trapped under this rubble, every mistake floods his mind and he considers giving up until he considers failure as a teacher. Failure is a path to forgiveness, self-forgiveness, and a path to understanding and peace. This epiphany is one Yoda will pass on in The Last Jedi, as he no doubt recognizes the cynicism in his former apprentice, holding a torch and ready to burn an effigy of the Jedi Order in its earliest iteration on a forgotten planet. The connective tissue to that moment is strong and it also sets the stage for a big moment that revives Yoda’s purpose for the galaxy. A new student arrives with the promise of new hope and a new legacy of Jedi. Despite how melancholy the tone of this story is, it ends on optimism that will carry the reader right up to the opening crawl of The Rise of Skywalker. 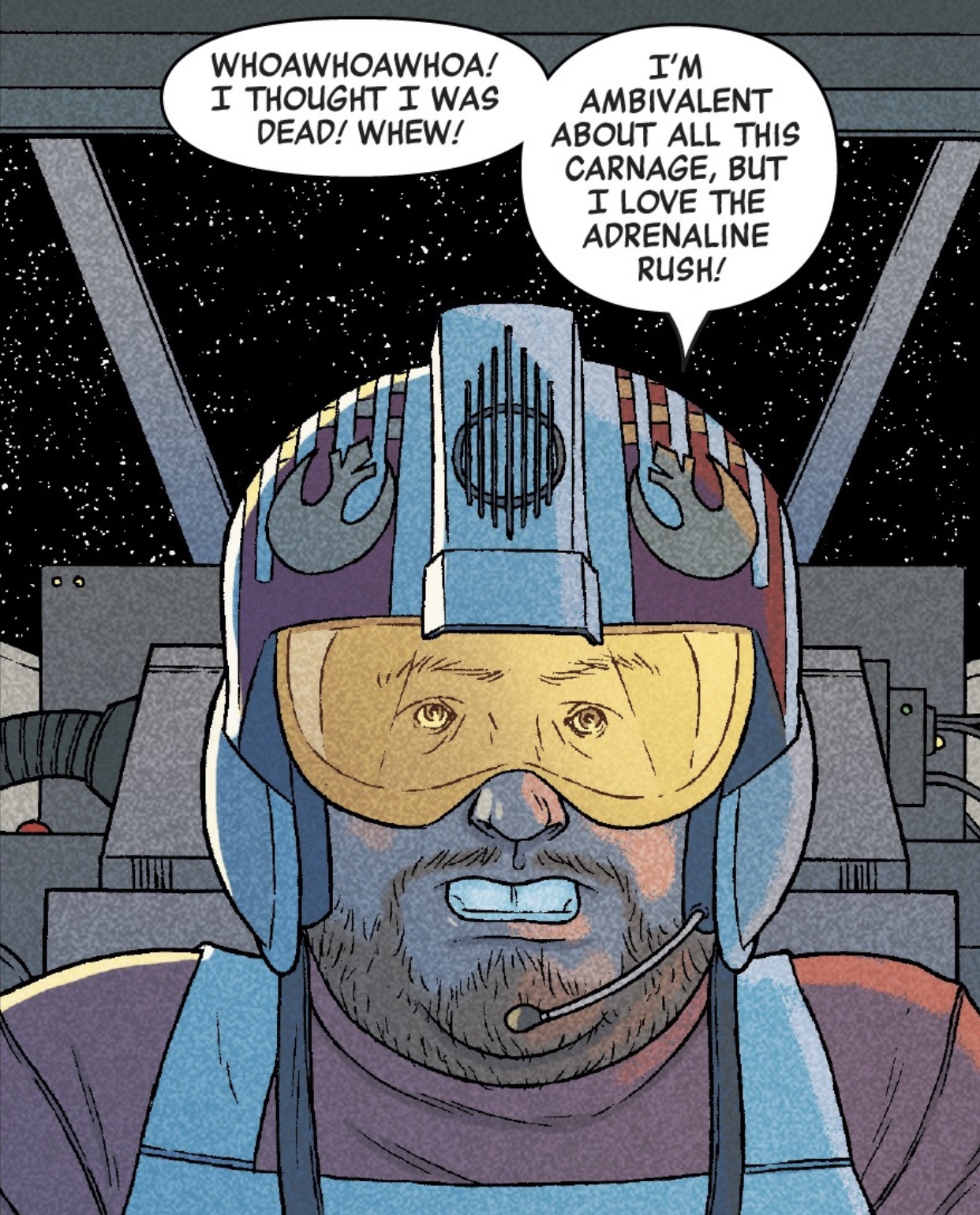 Porkins fans, your time has arrived with this unexpected story into the surprisingly rattled psyche of Jek Tono Porkins. His gruff exterior has only been briefly seen in A New Hope but we get a deeper look into the state of all things Porkins in “Stolen Valor” by Jon Adams, who also handled the art with colorist Chris O’Halloran. Not only do we get an insight into how the war against the Empire took a toll on Porkins, we also see how Biggs Darklighter was an ally to a friend and comrade he could sense was deeply troubled.

We learn Porkins is the son of an Imperial pilot, which gives a human face to each exploding TIE Fighter on the receiving end of his X-wing blasters. After a conflict near Kashyyk and many destroyed TIE Fighters at the hands of Porkins, Biggs senses his friend needs a vacation. Porkins is deeply troubled by the constant carnage in a seemingly unending war with the Empire. Biggs offers to show Porkins a tropical paradise of a world with their shore leave.

They encounter an Imperial officer who also needs a break from the war, but when the opportunity to kidnap her presents itself, the two Rebel pilots decide to coexist with the Imperial officer on a human level. Of course, she betrays them, but Porkins takes this humanity back to his comrades at the Rebel Alliance. It’s a moment of restraint, while it ended up being the wrong call, is something he seems to feel many people in the Rebel Alliance lack. This self-care reminded Porkins and Biggs that they are fighting for the humanity of the galaxy, which also means they are fighting for the humanity of their enemies. When they relay the story of how they showed mercy to the Imperial on vacation, another Rebel pilot relays a story of how a stormtrooper defected and saved their life. The issue, as optimistic as it is, ends with a very solemn question: Even when the war is won, what will be left of those who fought and survived? The final frame below is one of the more haunting moments in Star Wars comics. 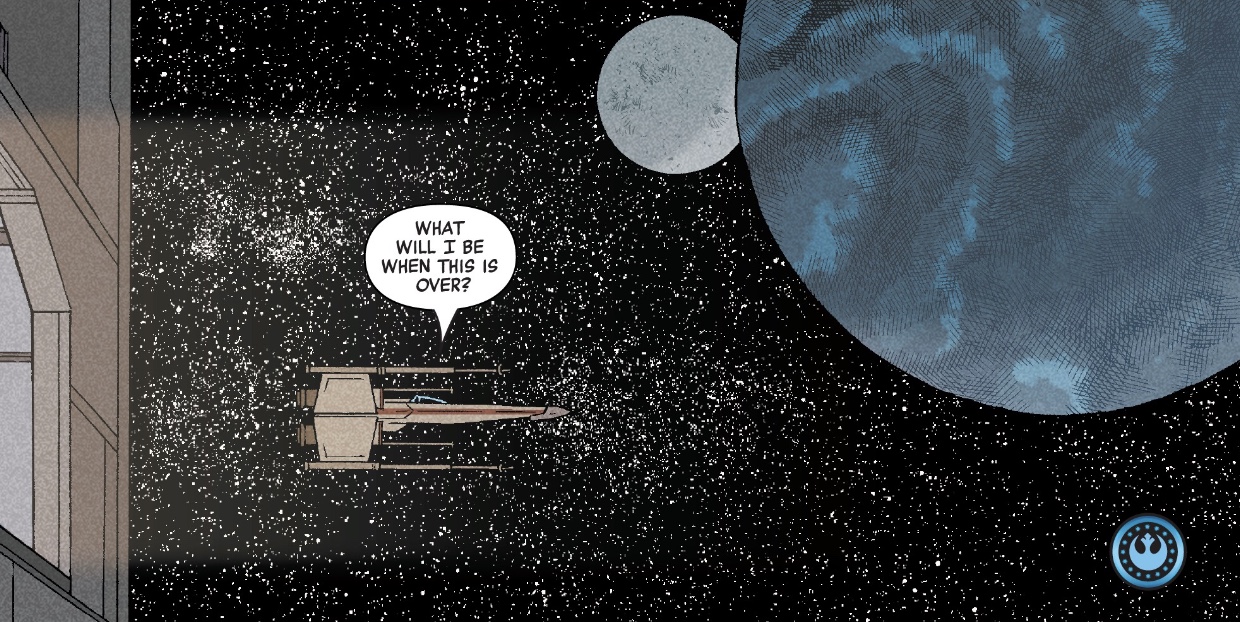 The Age of Rebellion is already strongly footed as must-read material for Star Wars fans. While the short stories in this issue don’t offer much in terms of broader implications for the growing canon, they are well worth your time. My favorite was “The Trial of Dagobah”, but all three are very good. I thought it was very interesting to use Porkins as a moment for the psychological human cost of war. IG-88 seemed to be a prelude of what’s to come, but as introductory tales go, this one was fantastic. The love creators poured into these stories is apparent and I think you’ll be rewarded once you turn the last page of this issue. Marvel continues to offer some great glimpses into pivotal moments of Star Wars characters and events. 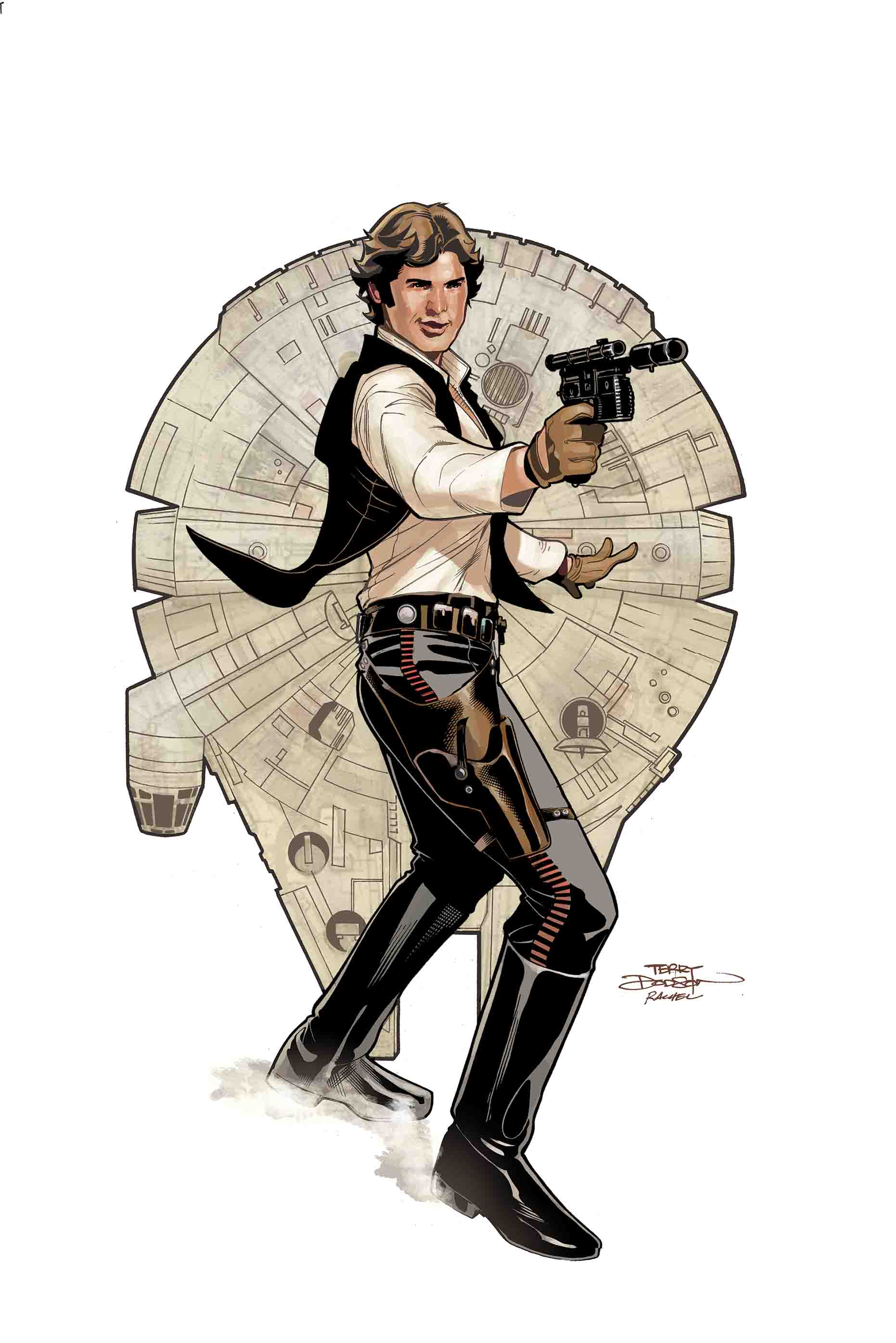 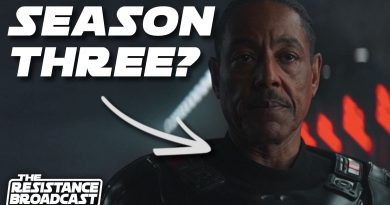 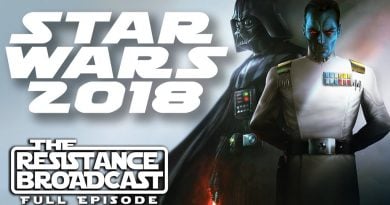 The Resistance Broadcast – A Look Back at Star Wars in 2018 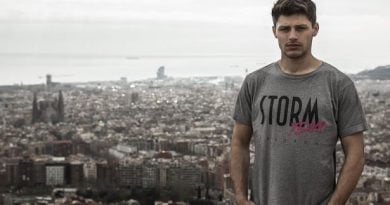