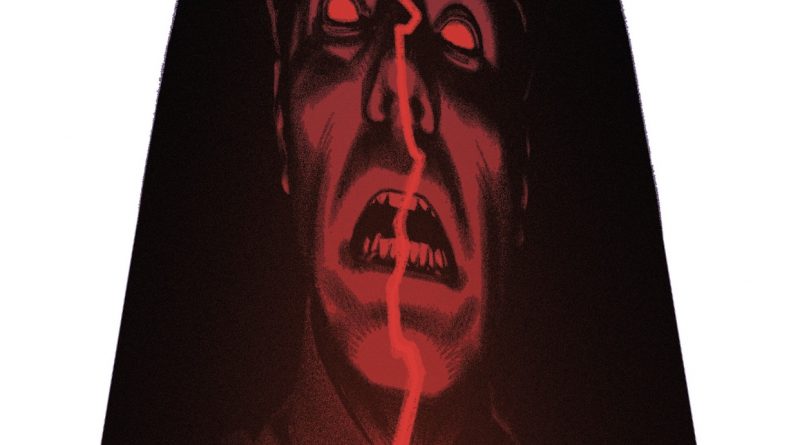 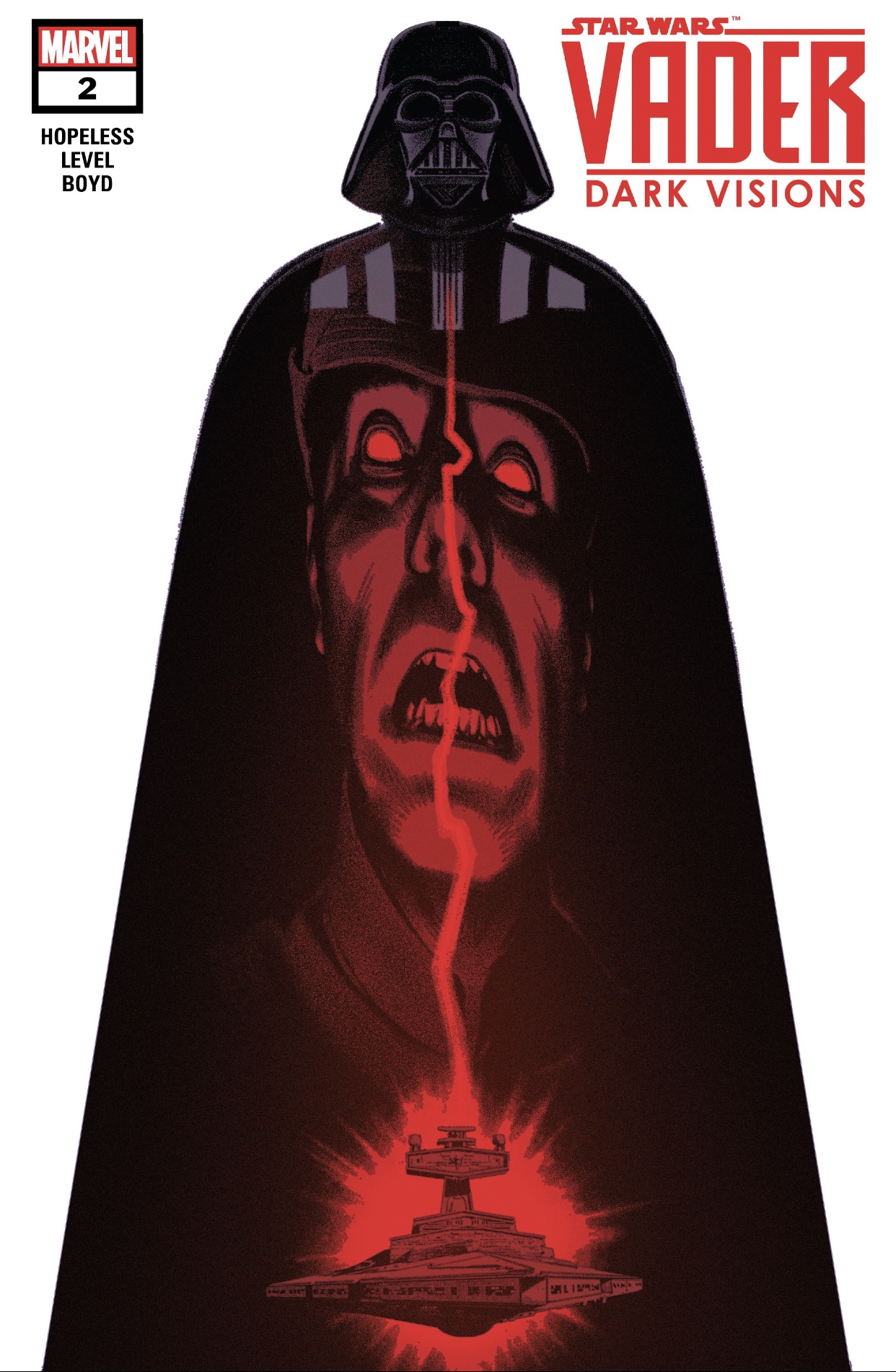 Vader: Dark Visions has been over-the-top so far and I love it! There is nothing subtle about this series. Told through the eyes of those who encounter the Dark Lord of the Sith makes it instantly relatable to the reader. Marvel shows no signs of slowing down on Vader content as the ever-expanding catalog of titles shows but I’m grateful they’re going the extra mile to make this series unique. If you’ve ever wondered what it’s like to be an Imperial commander who’s suffered at the hands of Vader, this issue gives you a close look. SPOILERS AHEAD…. 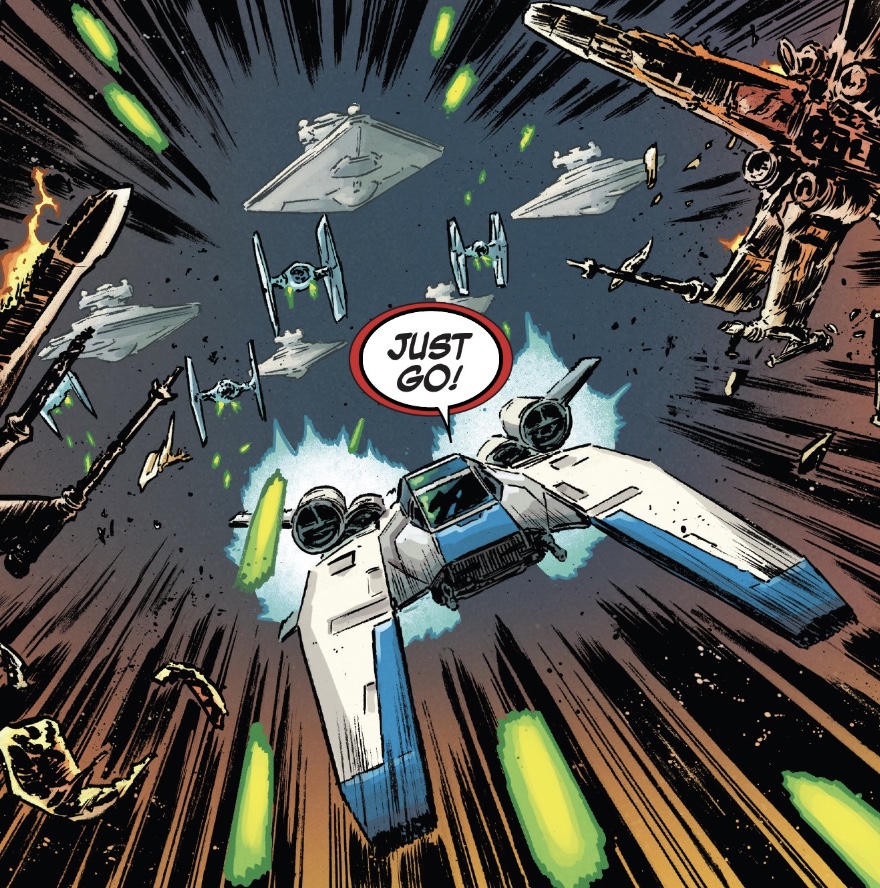 This issue moves fast and opens with a bang. The Imperials are hot on the heels of a Rebel pilot who just escaped a devastating loss. The pilot was able to escape with schematics of a military factory, but the commander of the Bellicose, Tylux, decides to claim it a victory due to the intelligence they’ll be able to glean once they unlock the captured Rebel computers. They transmit their victory to the high command and claim to be garnering intelligence from the Rebel pilot they didn’t capture. Tylux relaxes in his quarters as his team go to work on decrypting the computers, when he gets a congratulatory message from the Emperor himself but not exactly what he expected.

I don’t think it’s ever a good day on any Star Destroyer when you find out Darth Vader is coming. Especially when you’ve just deceived your commanding officers that you have something he wants. Something Vader wants so bad he’s willing to come fetch it himself. Tylux knows what happens when you disappoint the Emperor’s apprentice and it’s from firsthand experience. 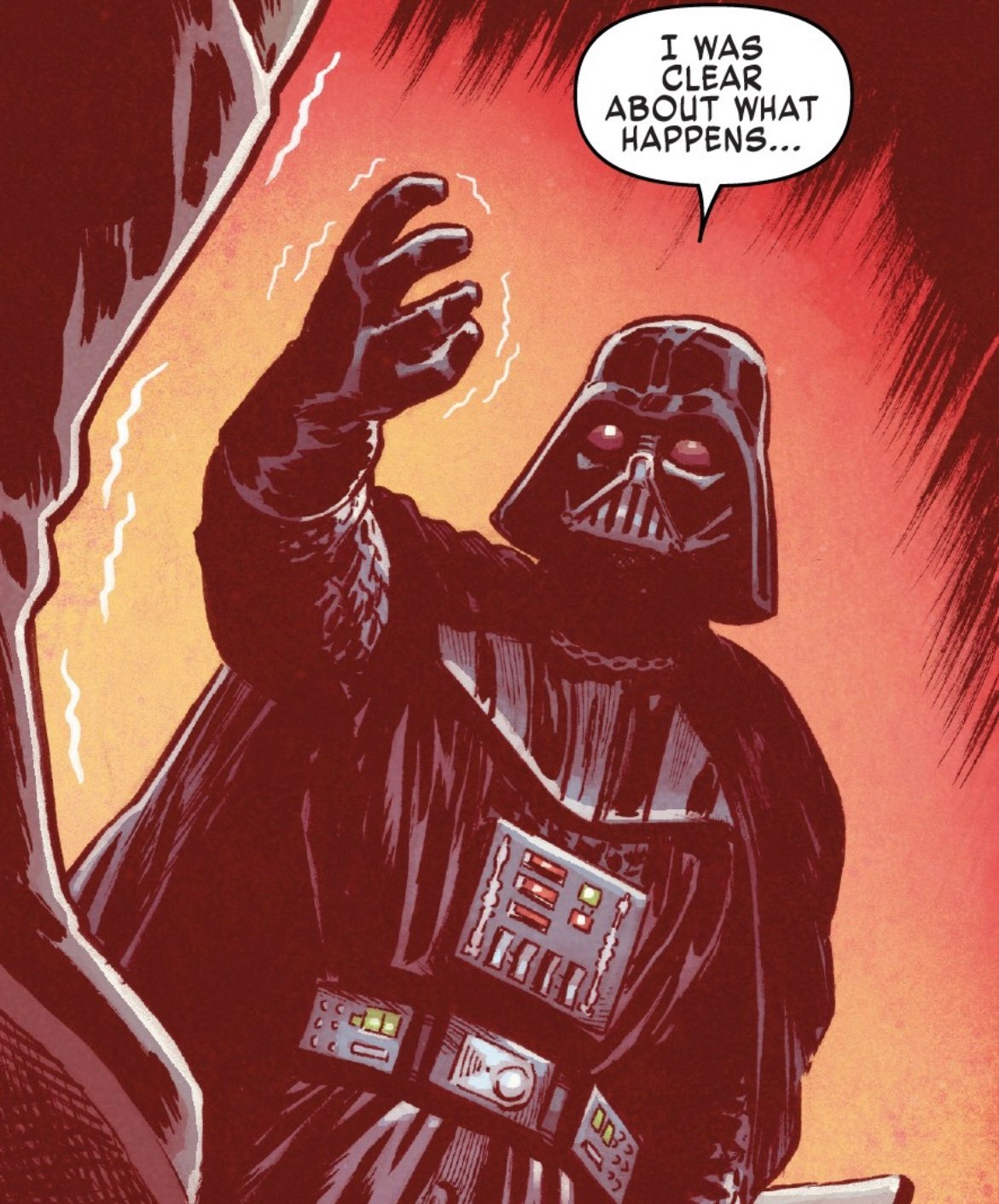 I love a good Star Wars flashback. We see why Tylux is especially terrified of Darth Vader. A much younger Tylux witnessed Vader torture a group of Imperial officers to death after they’d failed the Emperor. Vader knows fear, so he left Tylux alive to tell the tale and remember what he’s capable of. It’s a pretty gruesome scene and this gritty, frantic artwork by Brian Level and Jordan Boyd leaves the reader unsettled. I thought the art elevated what could have been a pretty basic story into something terrifying. It’s not the most elegant but this is a story about the crude truth of Imperial discipline and hierarchy – specifically, Darth Vader can do whatever he wants to pretty much whomever he wants. We know that hasn’t always been true, but this depicts a Sith Lord unleashed.

Tylux becomes unglued and runs to the bridge, frantically ordering the Bellicose to break off from the fleet and pursue the Rebel pilot through hyperspace and into an asteroid field. Vader is coming, so Tylux not only wants to look busy but needs to have a Rebel ready to hand over to the dark lord. His crew is not thrilled about taking the Bellicose into a field with giant rocks that will cut it to shreds, but Tylux knows if they don’t get the Rebel a death by destruction will be a more peaceful death than what Vader will deliver to him. There’s no denying the trauma Tylux suffered when he saw Vader has shaped the officer and person he is in this issue. Again, the art underscores the madness Vader’s name awakens in Tylux’s psyche. 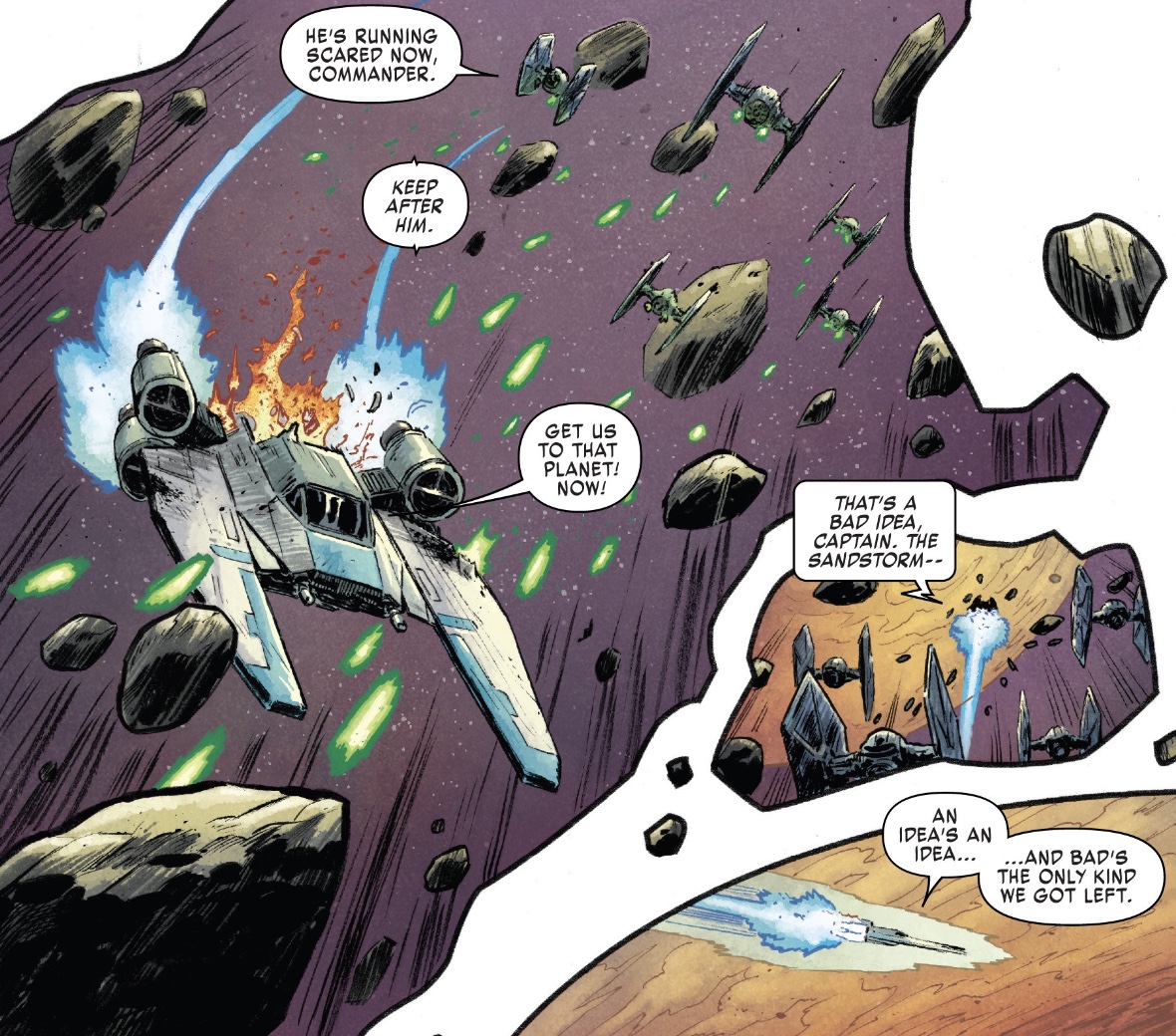 They catch up with the Rebel pilot, who can’t believe what he’s seeing as the Bellicose is pummeled with asteroids. It seems hard for him to take whoever is commanding seriously and must sense the desperation. As Tylux dispatches EVERY TIE Fighter from the Bellicose, the Rebel pilot decides to take advantage of the irrationality and leads the TIE’s into a sandstorm on an exoplanet in the asteroid field. Think Jedha meets the red eye of Jupiter, as the sandstorm consumes the TIE Fighter’s, whose clunky designs and instrumentation’s weaknesses are exposed in the maelstrom of sand. This is a really good action piece and I’m always up for a good space battle, especially when Star Destroyers are involved. 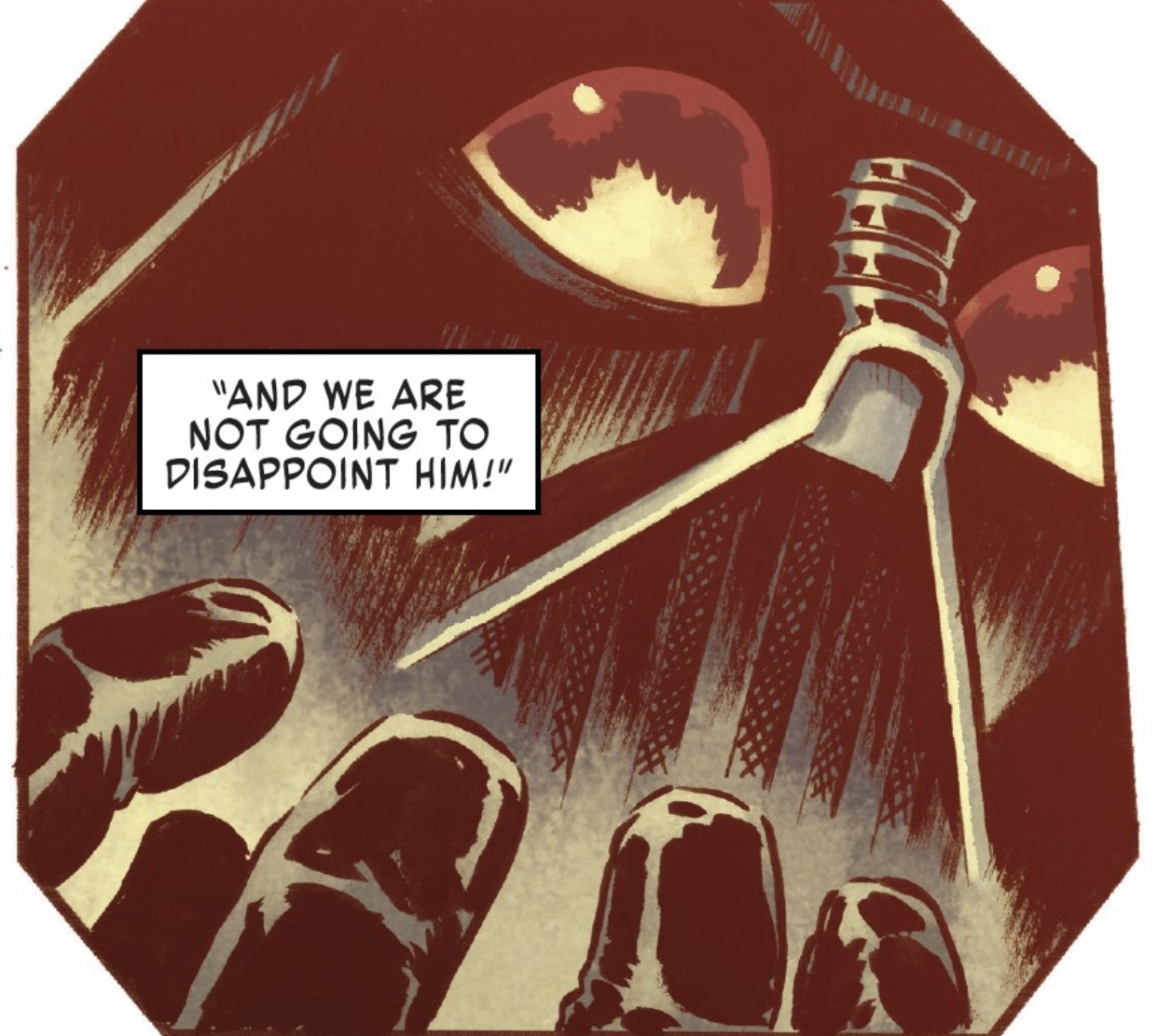 The specter of Vader looms over everything as the disaster of Tylux’s own making unfolds. Fear has taken hold of whatever reasonable qualities the commander had and he’ll do anything to escape the wrath of Vader – but he’s only making it worse for himself. It makes me wonder how many other commanders have made poor decisions, judging the risk/reward of a quick death versus a slow and painful one at the hands of the dark lord they may disappoint. I remember clearly an early issue of Darth Vader by Kieron Gillen where a commander put a blaster to his head and took his own life rather than present Vader with failure. Really dark stuff here, but very well executed. The psychological terror Vader enforced was a double-edged sword when it came to efficacy but I don’t think the Sith Lord ever stopped to consider it. 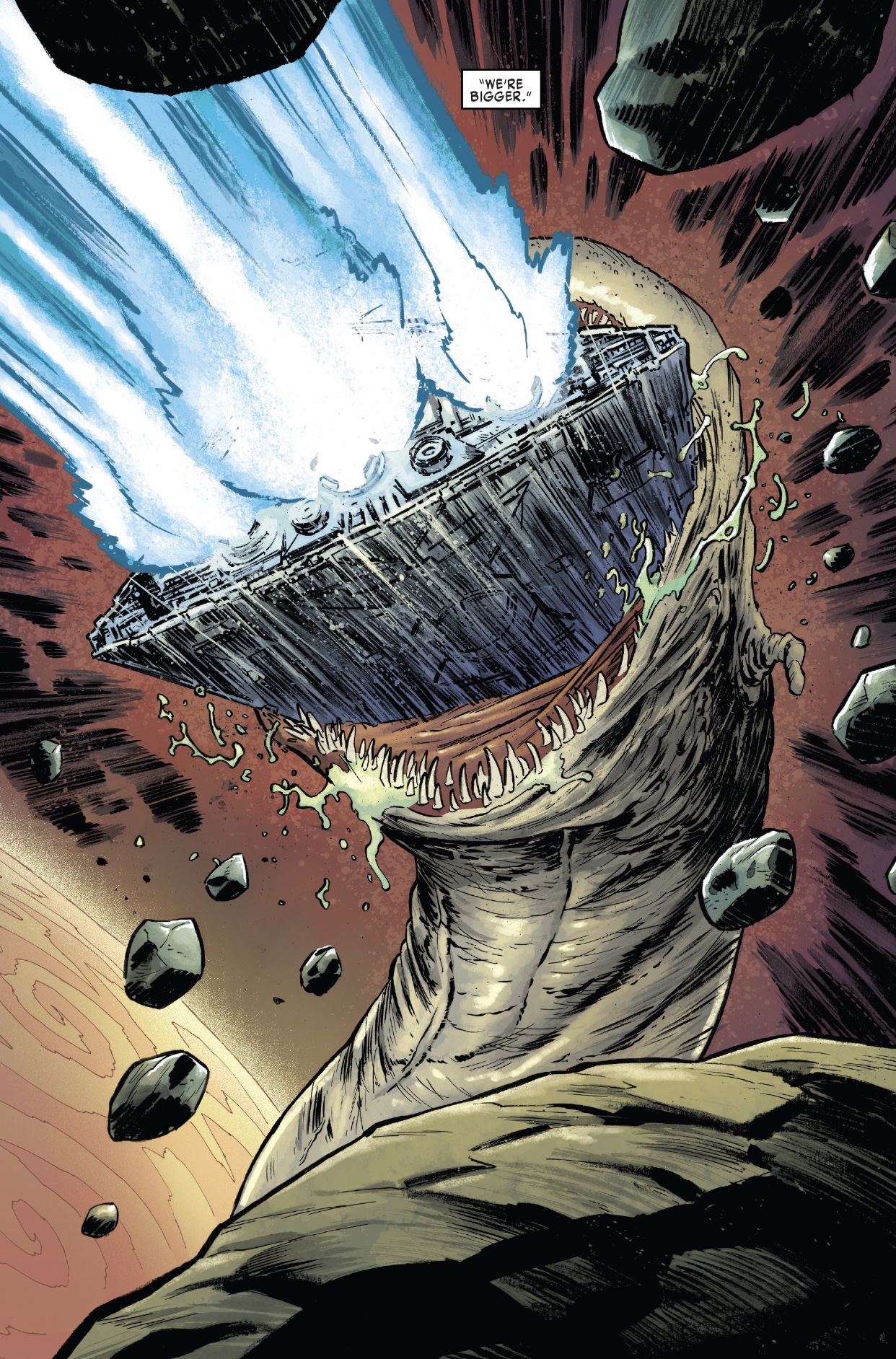 As mentioned earlier, this series is over-the-top. Tylux is so desperate to capture this pilot he flies the Bellicose into the mouth of an exogorth. The Star Destroyer rips through the creature with no problem, but the U-Wing is already on it’s way out and the Bellicose is covered in mynocks. We see what could have been the fate of the Millennium Falcon if they’d stayed in the exogorth any longer. The mynocks swarm the Star Destroyer and start causing power surges across the ship. At this point, Tylux is so delirious he just keeps pursuing the Rebel pilot as his nervous officers look on and try to decide what to do about their impaired commander. 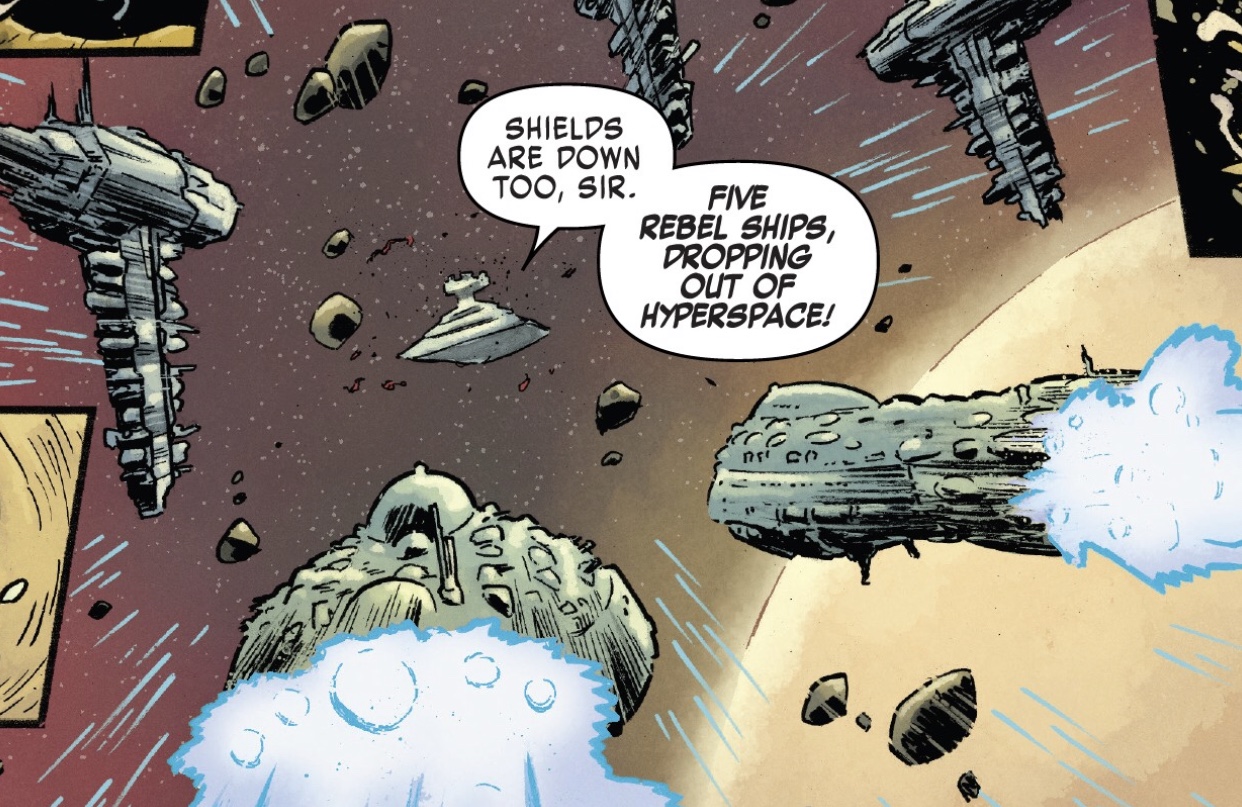 When it rains it pours. The Rebel Fleet shows up and more than outnumbers the wounded Bellicose. They make short work of the Star Destroyer, whose fleet is in pieces on the planet below, but don’t completely destroy it. It’s almost as if they know Vader is on his way and they’re leavin their calling card for him. 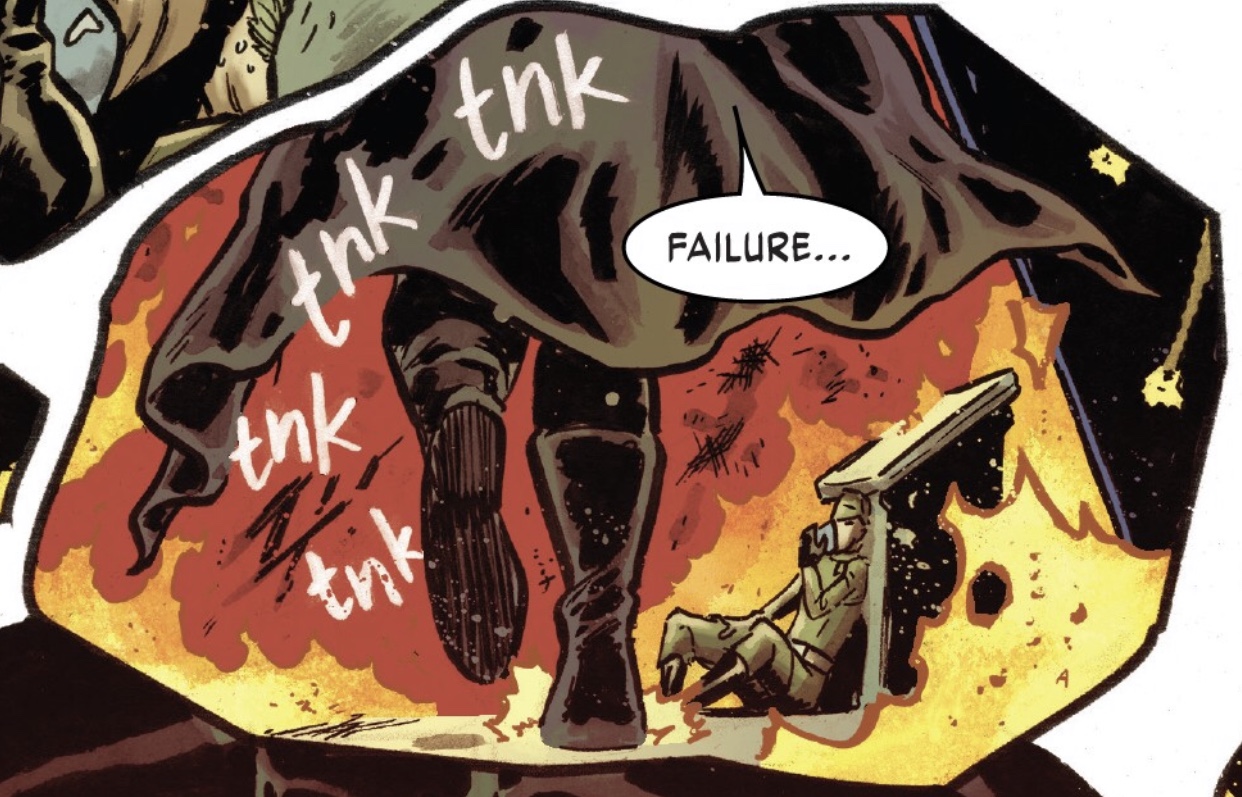 All that scrambling for nothing. Darth Vader has arrived after the Rebels and the lone survivor is Tylux. Not for long.

Dennis “Hopeless” Hallum wrote a cool, compact story here that conveys the pendulum of stress and duty Imperial commanders juggled under Vader’s shadow. I wasn’t sure what to think of this series at first but the first two issues have come screaming out of the gate. There is a lot to love here so I don’t see why any Vader fan should skip out on these. This issue moves at a wonderful pace and fully immerses the reader in each frame. The erratic art makes you feel like you’re in Tylux’s adrenaline-addled mind, just hoping each terrible decision will somehow lead to survival. There’s not a lot of hope for Tylux going into this story but I wouldn’t expect it in Vader’s Empire. 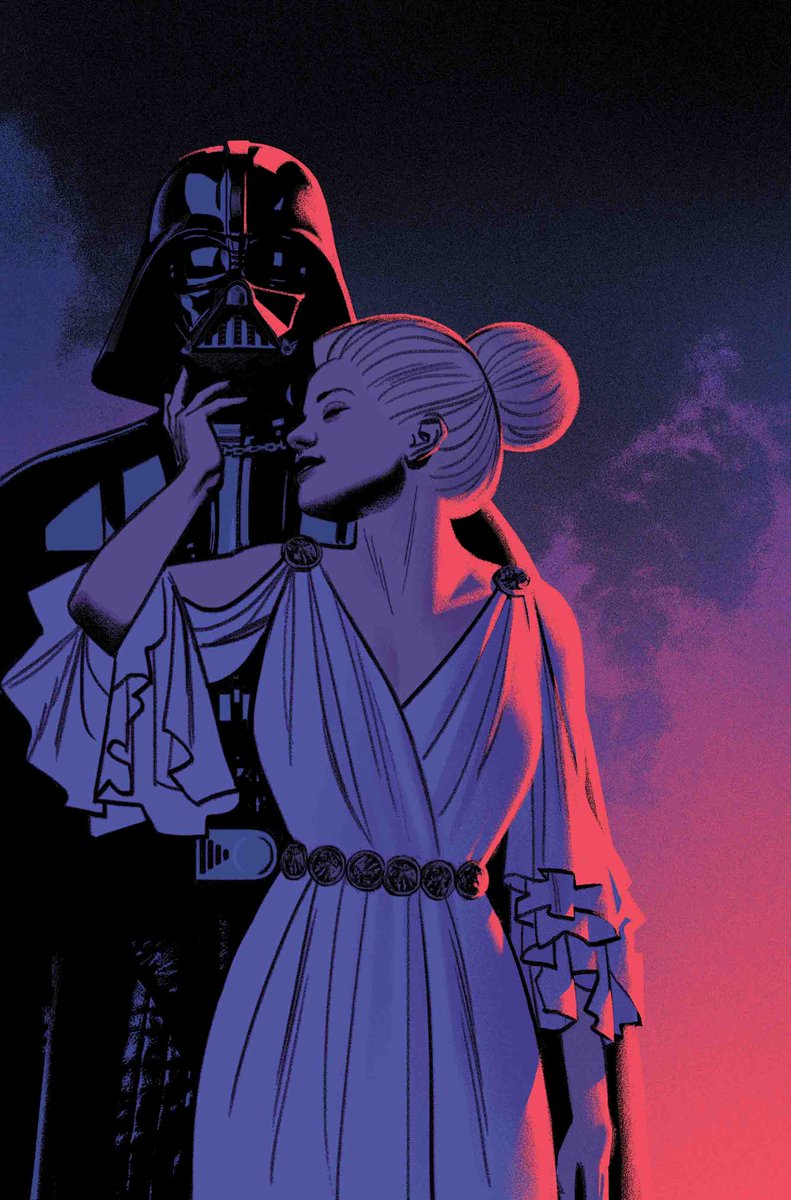 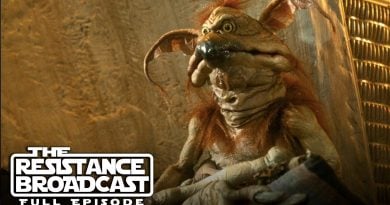 The Resistance Broadcast – The 12 Best Creatures in Star Wars! 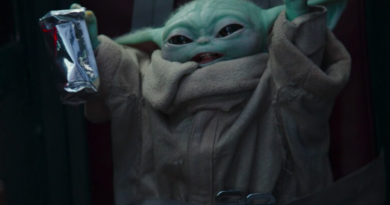 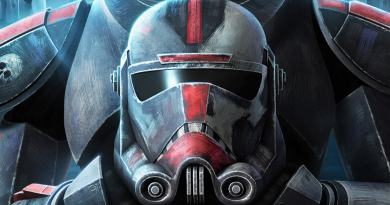