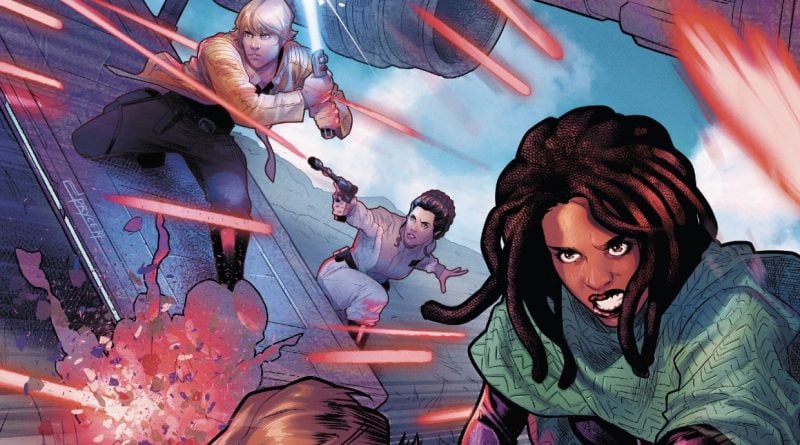 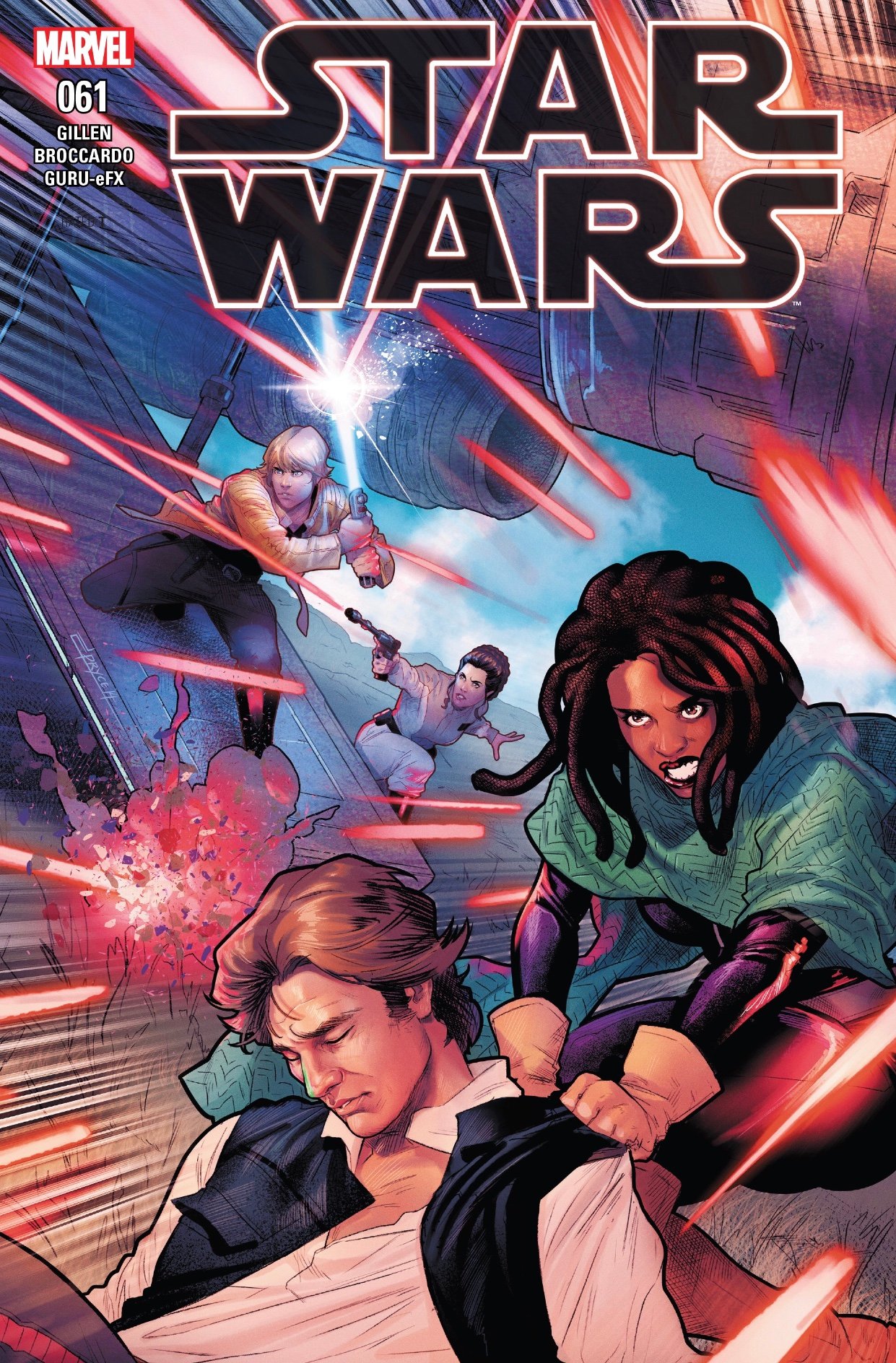 We all knew Leia, Luke and Han would be reunited with the Rebel Alliance but it hasn’t exactly been a smooth ride. After the revelation that Thane Markona and his clan once worked for the Empire and are looking to atone for their sins. Markona sacrificed himself, so now his daughter leads their clan to fight against the Empire. Sana Starros has rejoined our heroes and they are on their way to an Imperial impound yard to get her ship back and rejoin the Rebel Alliance. “The Escape” comes to an end, but no one is going quietly toward it in this issue. SPOILERS AHEAD….

After the SCAR Squadron stormed Hubin, all they ended up accomplishing was getting their ship stolen and marooning themselves. Our heroes and Tula Markona escaped Hubin, following it up with an aggressive attack to get Sana’s ship back. Han and Sana smash the Imperial shuttle into the control tower of the impound yard. 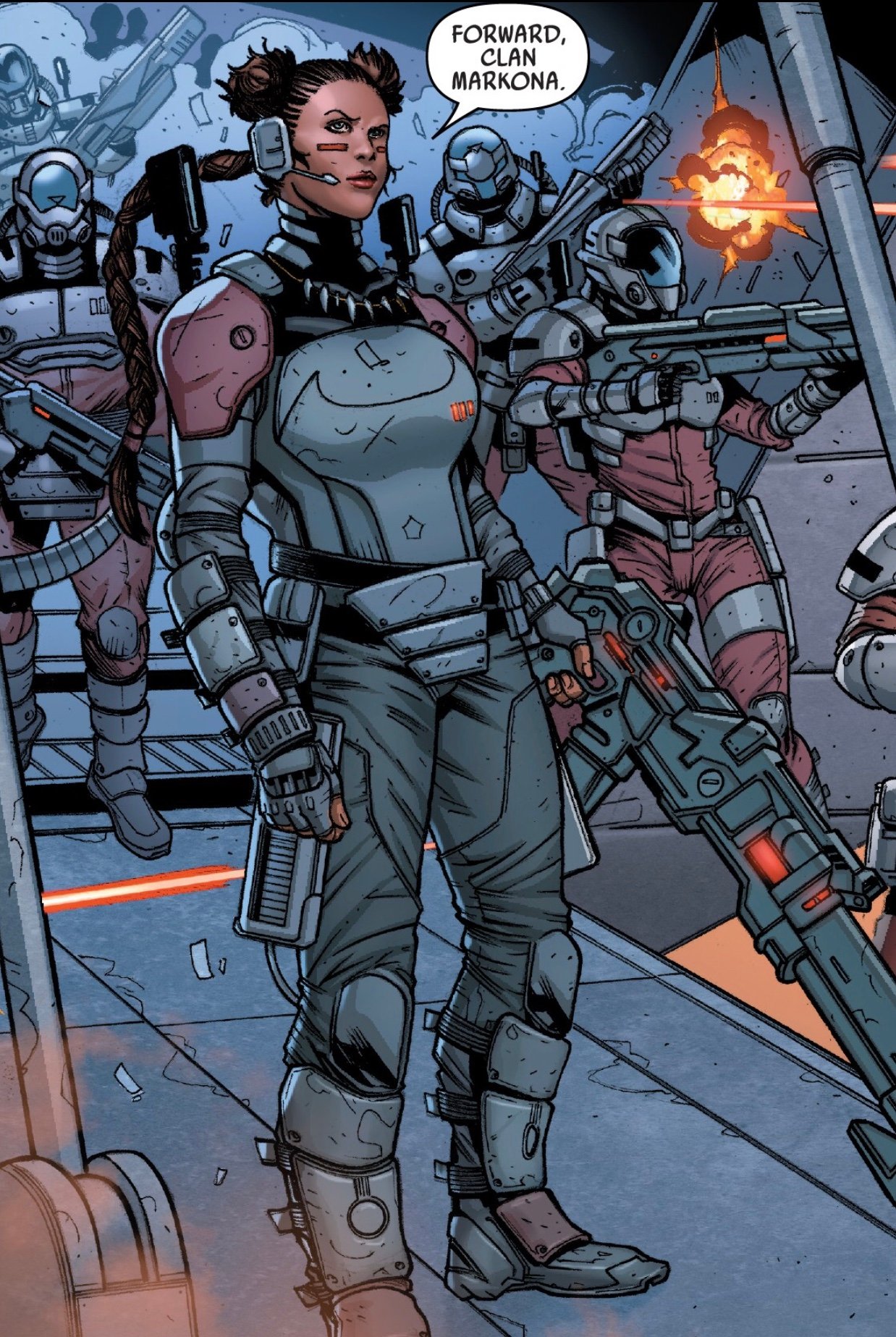 Tula Markona and her clan lead the attack to provide cover for Luke, Sana, Leia, and Han. The attack is swift and it doesn’t take long to wipe out the bucket heads the Empire throws at them. It was made clear in the previous issue that Tula is very angry about her father’s death and directs a lot of that anger at Luke. She’s able to channel that rage at the people really responsible for the death, but Tula can’t help if it weren’t for outside forces they wouldn’t have discovered Hubin in the first place. It’s completely valid but doesn’t bode well for Luke’s place in her life.

Tula doesn’t need any help from these four and in the midst of their run for Sana’s ship, a certain archaeological doctor comes up. I didn’t realize they considered Aphra an ‘ex’ of Luke. I know they’ve interacted, but I never got any sense of romance from them. Sana jokes how she agrees with me, since we all know Aphra only has eyes from Tolvan. This helps confirm that this takes place after some of the events in Doctor Aphra “The Catastrophe Con”, which I’d been trying to figure out. Our heroes and Tula take separate ships and make their way to Brentaal IV, following a contact that could lead to the Rebellion.

Meet Qensog, the contact who will help our heroes back to the Rebel Alliance. Since he speaks a rare form of Huttese, Threepio is the only one who can do the negotiating. He gets the coordinates and a new pair of legs for himself. Makes me wonder how many different limbs our protocol droid has had over the years. They get the location of Ackbar and Home One, but Luke knows Tula and her clan will be needed elsewhere, so he gives them the location to join General Hera Syndulla’s Geist. Luke hesitates and suggests maybe Home One could use them, but Tula’s made up her mind. Let me just take a moment here to say something: Please give me a comic series (or any series) where General Syndulla and the Markona clan travel the galaxy, kicking Imperial ass. Back to the review. 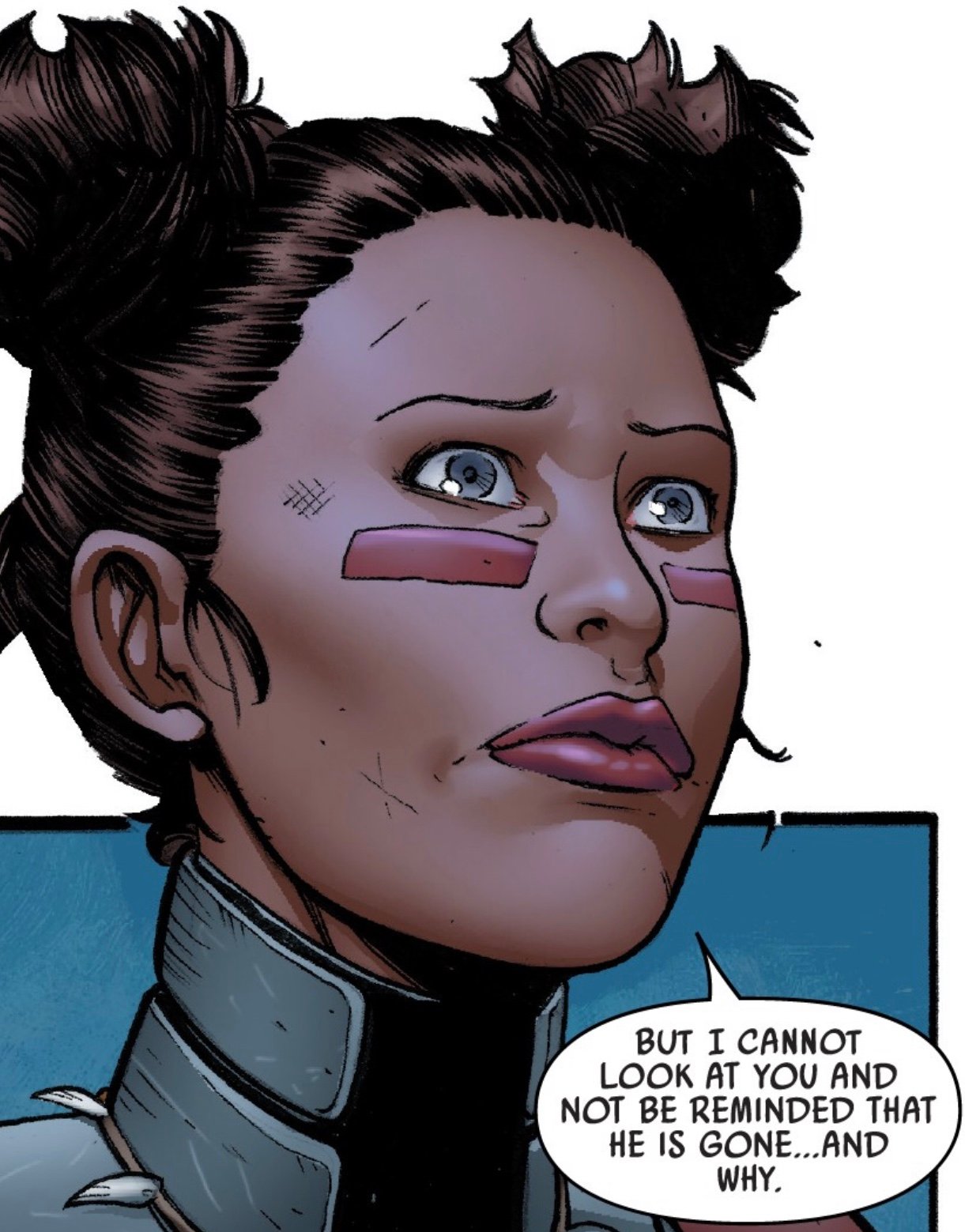 Tula is happy she had her time with Luke but that time has ended. It takes strength to be honest with yourself and those you care about in the face of grief. There’s nothing vindictive about Tula walking away with Luke. Whether it’s fair or not, Tula sees him as the catalyst to a tragedy that took her family and her way of life. I don’t doubt she and her clan will embrace the Rebellion, but the peace and tranquility they lived in for so long are forever gone and that has to be traumatic. They are no longer isolationists who live their own way. They’ve rejoined the galaxy and with a new leader. Tula knows she needs to find herself to lead her people and help the Rebellion. Luke has quite a bit ahead of him, as well. 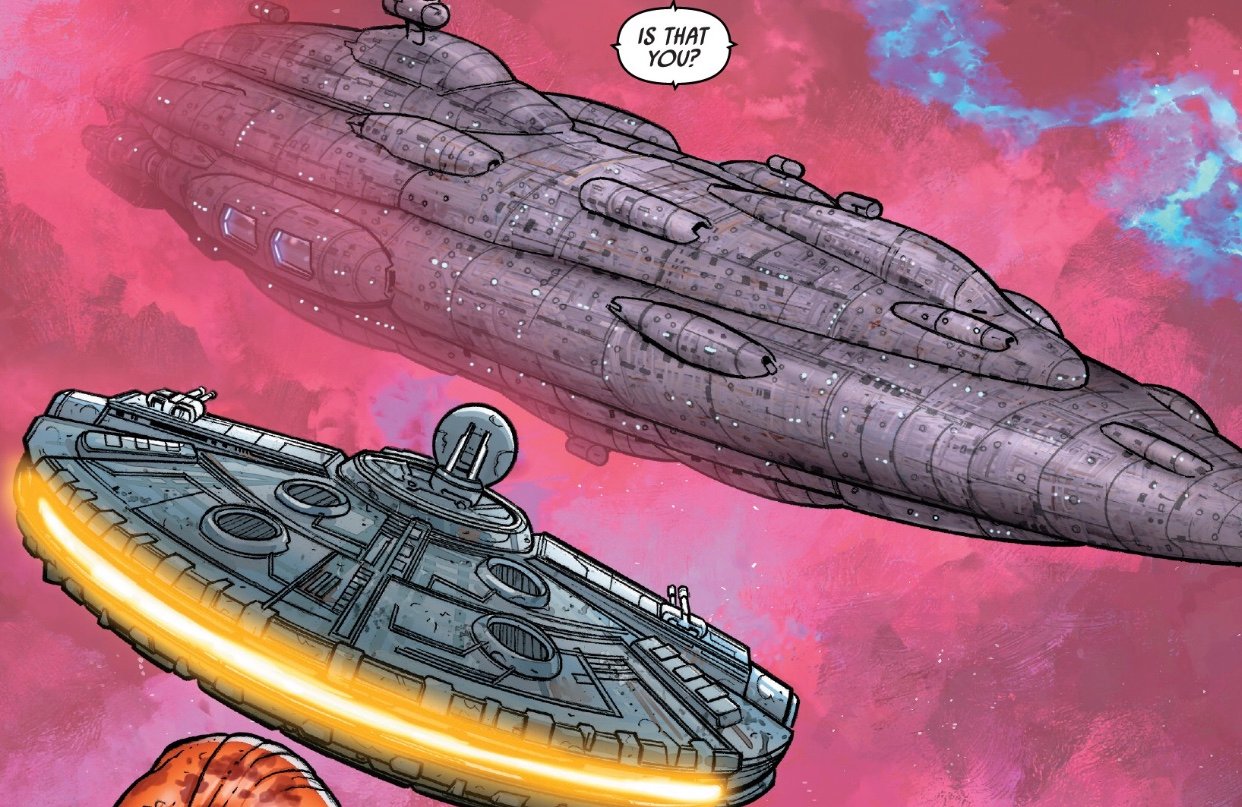 Love this shot of Home One hiding amongst the gaseous clouds of a nebula. Ackbar is relieved to hear from Leia, but informs her that many have been lost. “Hope Dies” has left its permanent mark on this series and I don’t think the repercussions of that event arc will fade any time soon. I wouldn’t even be surprised if we hear it referenced in other canonical stories. Leia and Ackbar aren’t the only ones happy to be reunited. Han Solo has been missing his ship and co-pilot something fierce, even if he doesn’t want to admit it. 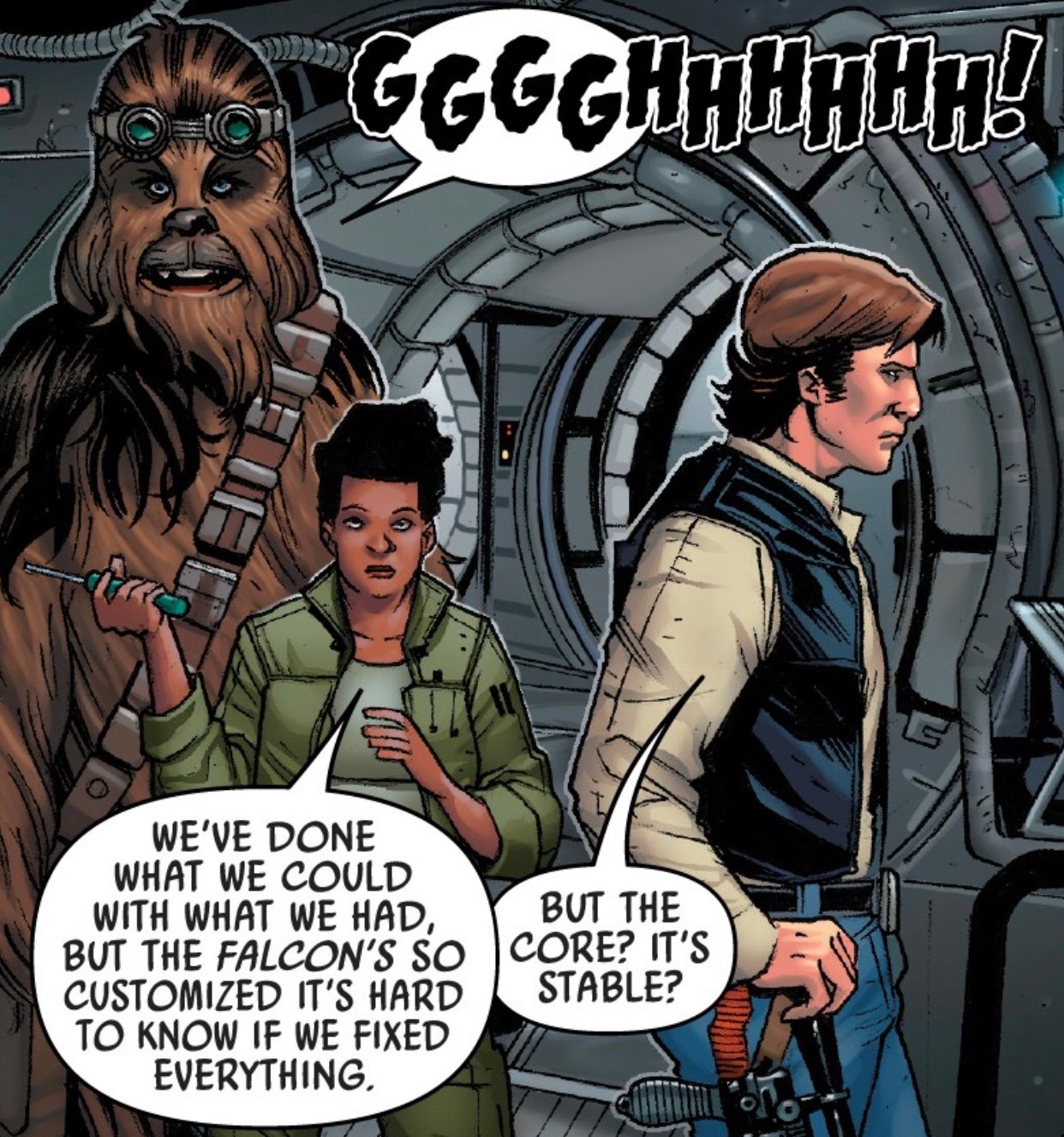 Chewie’s had some help from engineer Meorti, but Han’s only concerned about anything she may have repaired or tweaked on the Falcon. Like Threepio, she references the peculiar nature of the Falcon’s higher-functions. I know not all fans are crazy about Elthree residing in the servers of the Millennium Falcon, but I love that connection to Solo. Han thanks Meorti for her work on the Falcon and then takes a few moments for himself in the cockpit. I’m happy Han Solo and the Millennium Falcon have been reunited, especially because I know where they are headed. 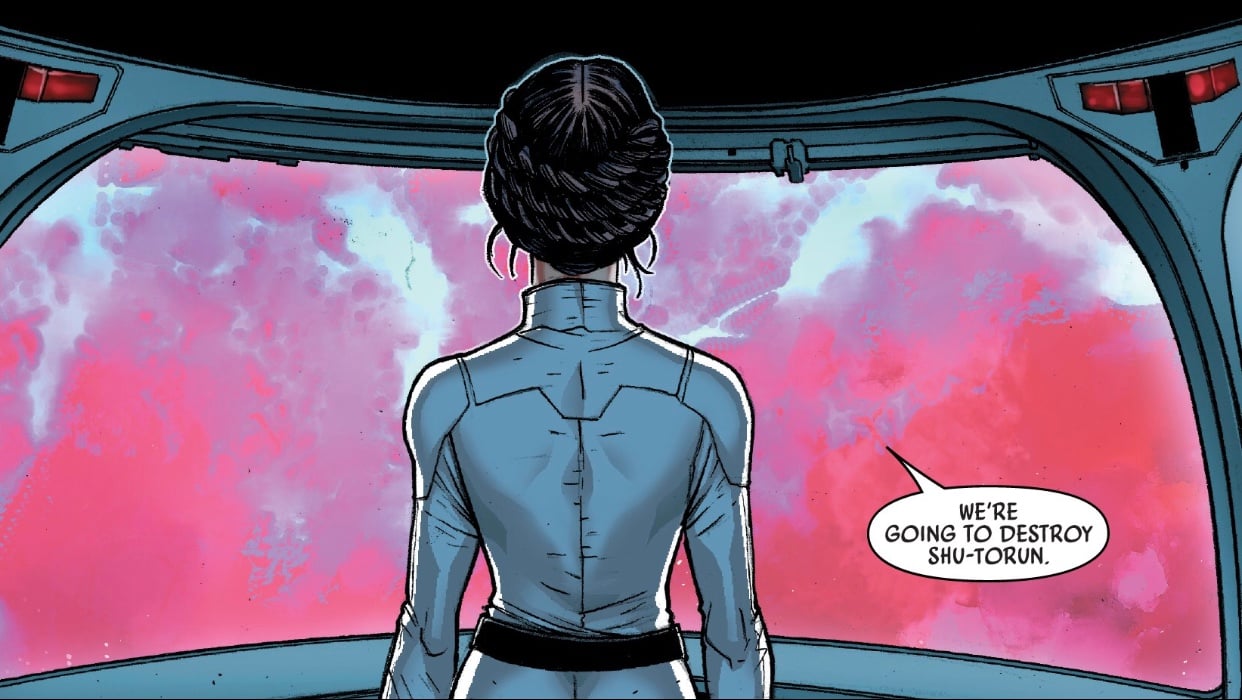 Leia wants revenge and she wants it bad. While everyone else was finding their own ways to pass the time on Hubin, she planned payback for Queen Trios. We all know what she saw at Mako-Ta and Queen Trios’ betrayal only adds pain to her grief. Endurance is not a word strong enough to describe the emotional fortitude of Leia Organa. She has seen the Empire take everything from her and this time, Leia wants to be the one who decides her enemies fates. Ackbar warns Leia that the Rebellion cannot spare soldiers for her satisfaction of seeing Queen Trios fall. Leia assures him it’s a small mission, but I can bet I know two humans and one Wookiee that will be along for the ride. 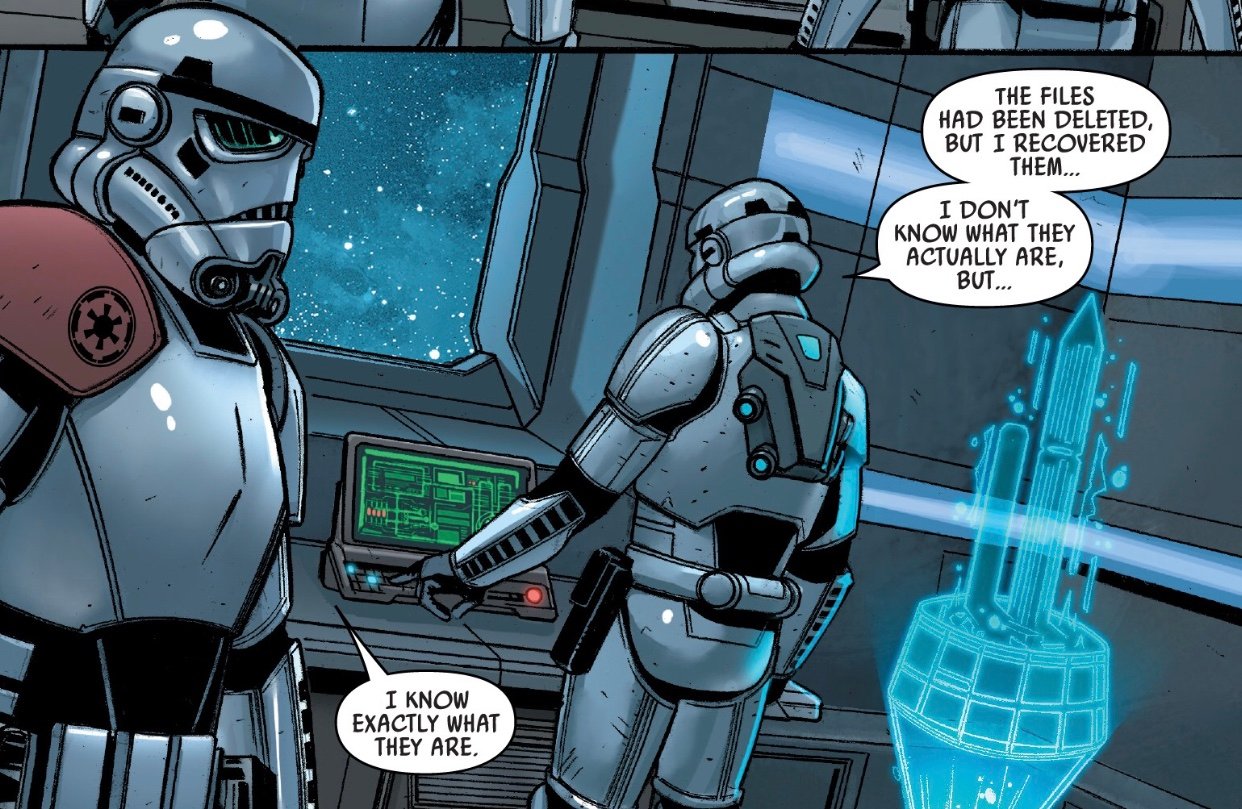 Looks like we might get a few more guests showing up at the party Leia has planned for Queen Trios. SCAR Squad found Leia’s notes, so if they can get off Hubin, no doubt that’s where they’re headed.

Andrea Broccardo has taken over art from Angel Unzueta, which surprised me, but I’m not complaining. Colorist Guru-eFX has stayed on, so tonaly it’s consistent, and I’ve no criticism of Broccardo’s art. It looks great! Writer Kieron Gillen continues to keep these characters and their never ending struggles fresh. I always look forward to these issues and I feel this is currently the strongest of the Marvel titles. I love them all, but Star Wars has been a great way to revisit the era of the original trilogy we all know and love. Marvel’s done well by this series and “The Escape” was a worthy successor to “Hope Dies”.  Now that we’re through with that, bring on “The Scourging of Shu-Torun”! 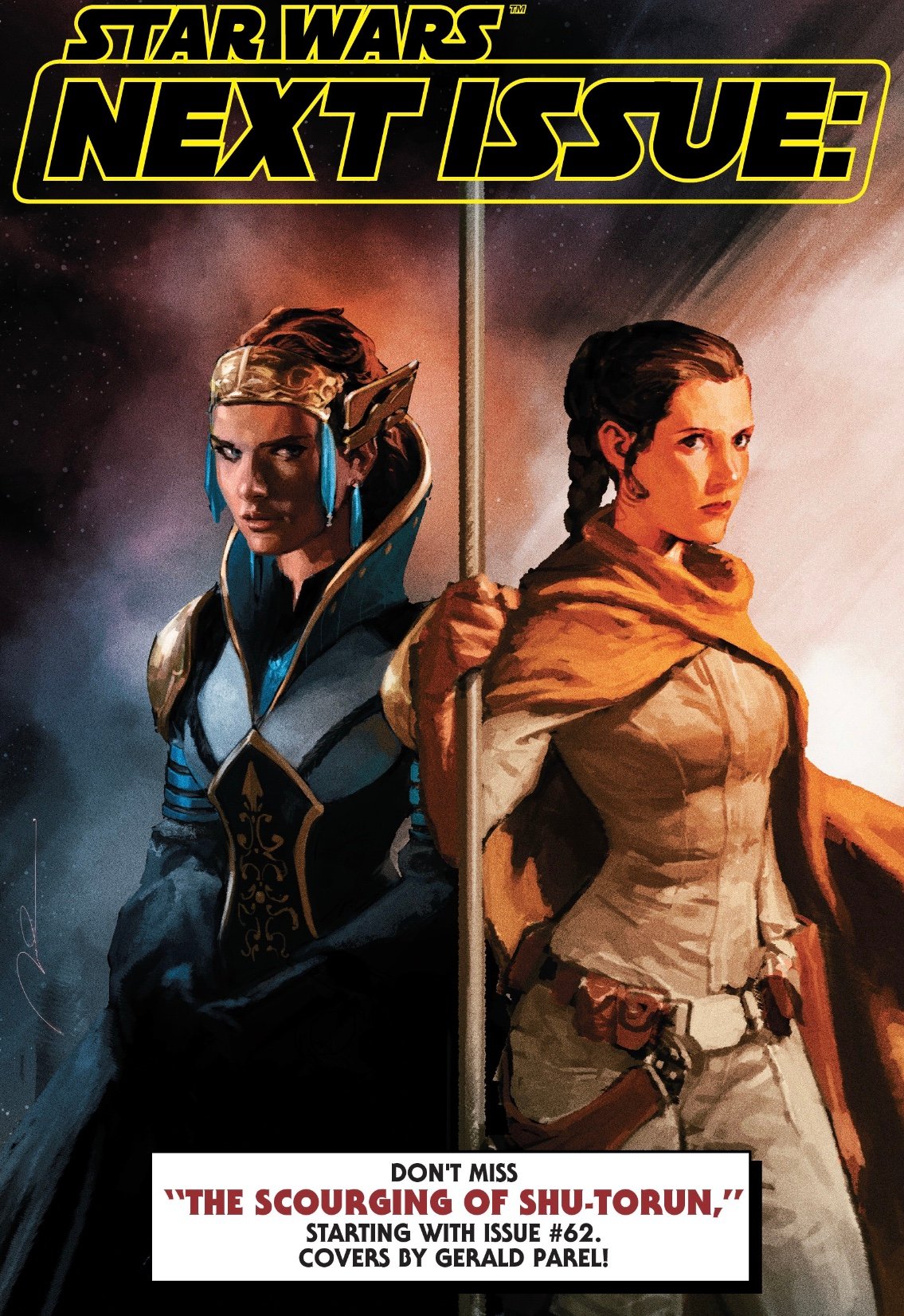 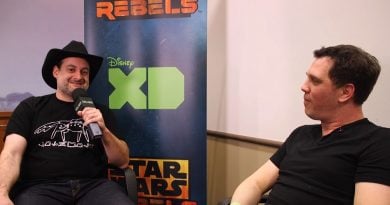 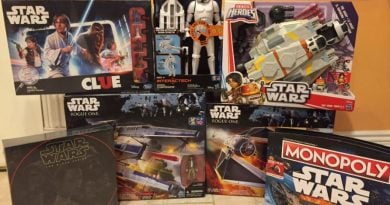 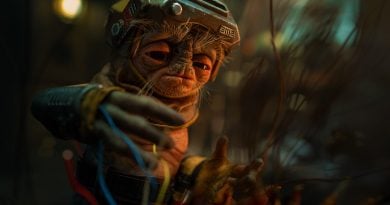 The Rise of Skywalker: Image of New Character Babu Frik and Contest to Win Tickets to the World Premiere