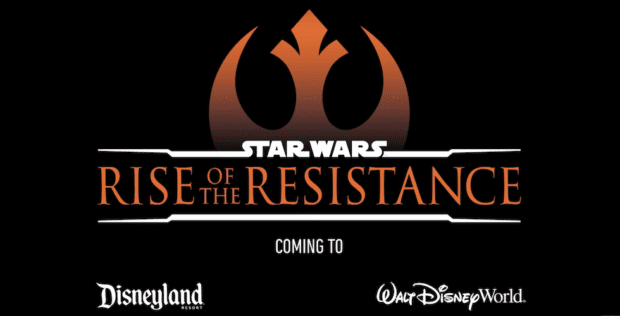 As we get closer to the grand opening of Star Wars: Galaxy’s Edge later this year at Disneyland and Disney World parks, additional rumors and potential details about the extensions are developing. Attractions Magazine has recently revealed potential details that outline the entirety of one of the two main attractions, Star Wars: Rise of the Resistance.

Potential Spoilers: Although these are only rumors, do not continue reading if you wish to avoid potential details of Star Wars: Galaxy’s Edge. 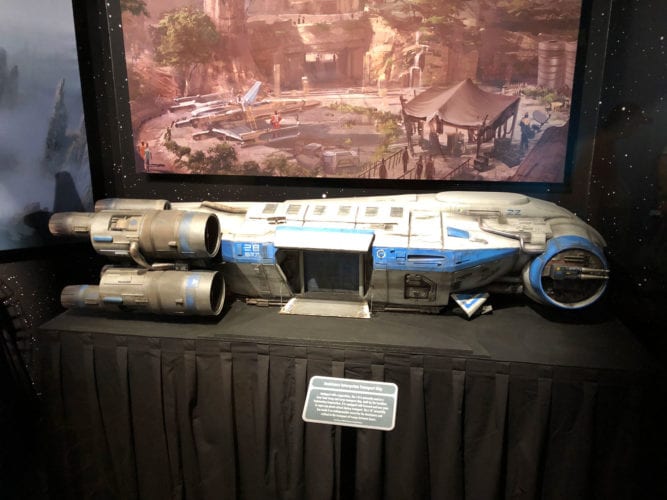 Star Wars: Rise of the Resistance was announced all the way back in 2015, but details have been minimal to this point. Based on previous concept art and displays, we know the blue transport ship shown above is involved in the ride in some capacity. It seems as though the ship will be utilized during the queue in a pre-show portion of the ride. Guests will board the ship and be spun around 180 degrees while music and video screens simulate the transport ship’s launch into space from the planet Batuu. While flying through the galaxy, the Resistance transport will be captured by the First Order, forcing you to land in the hangar of a First Order Star Destroyer.

The main storyline for the attraction begins once you’ve landed in the hangar of the First Order Star Destroyer. The hangar will be one of the largest rooms in the building, complete with animatronic First Order Stormtroopers, TIE Fighters and an incredible view of space. Guests will be funneled into four individual loading rooms designed to look like First Order holding cells. A secondary pre-show will have some type of droid to help explain the safety procedures and continue to move the story along, similar to what Rocket Raccoon does in Guardians of the Galaxy – Mission: BREAKOUT! 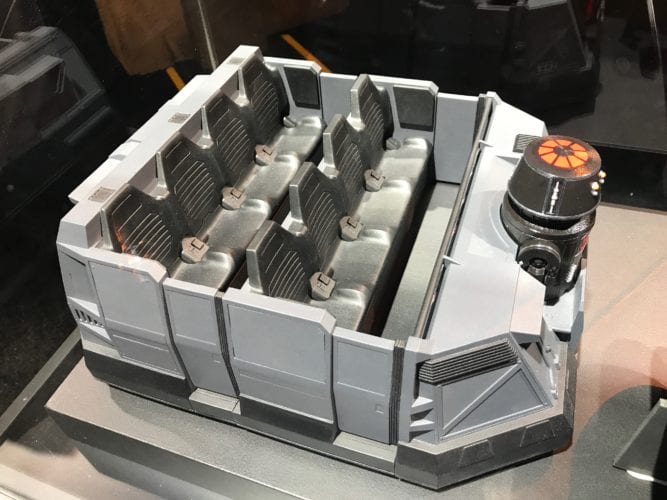 Guests will then be loaded into one-of-two trackless First Order transport vehicles. The two vehicles will accompany each other through the duration of the experience. Although there are numerous load rooms and transport vehicles, it is expected that only two vehicles will be in the same room at a time. Once the transport is loaded, the vehicle will be sent out for processing. The transports will enter a new room together where a rogue droid will rush across the upper bridge. The droid hacks the First Order mainframe, gains control of your vehicles, and launches you into your escape.

The vehicles burst into the hallways of the First Order Star Destroyer, only to come face to face with Kylo Ren. His lightsaber ignites and the transports back up in retreat, only to enter the AT-AT room. 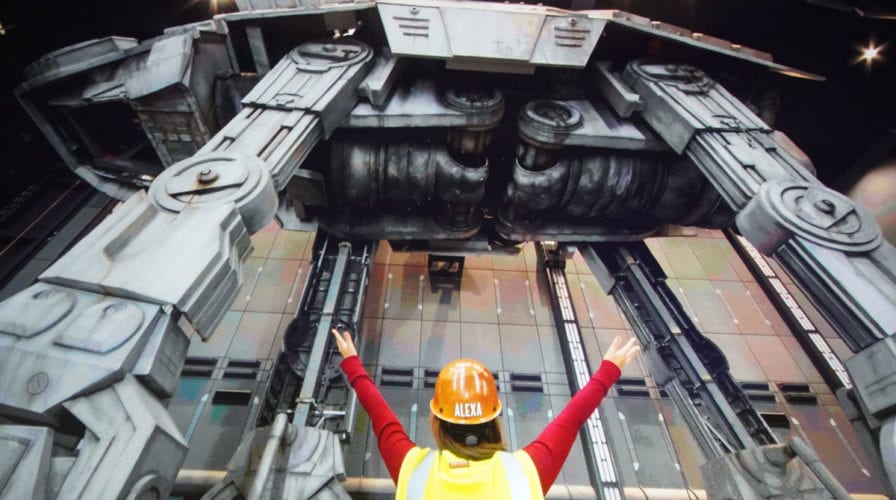 The AT-AT’s will be nearly full size in scale and each of the heads can move and fire upon the transports. The vehicles will become separated from each other briefly as they take their own elevator shafts on either side of the room up to the second floor, some 40 feet up.

Once up the elevator, the vehicles twist and turn down hallways to meet back up with the each other and move quietly underneath an elevated area. This elevated area will have two animatronic figures, Kylo Ren and possibly General Hux. The two will allegedly be discussing the sudden group of Resistance fighters attacking the ship to help save the captured guests. Upon leaving the meeting, the transports will then take the guests through a gun room. A row of massive turrets will be firing into space as guests travel underneath in the transports. Guests will be able to feel the power of the weapons as they shoot, recoil, and reload, and will also be able to see the Resistance fleet take fire on the accompanying screens. 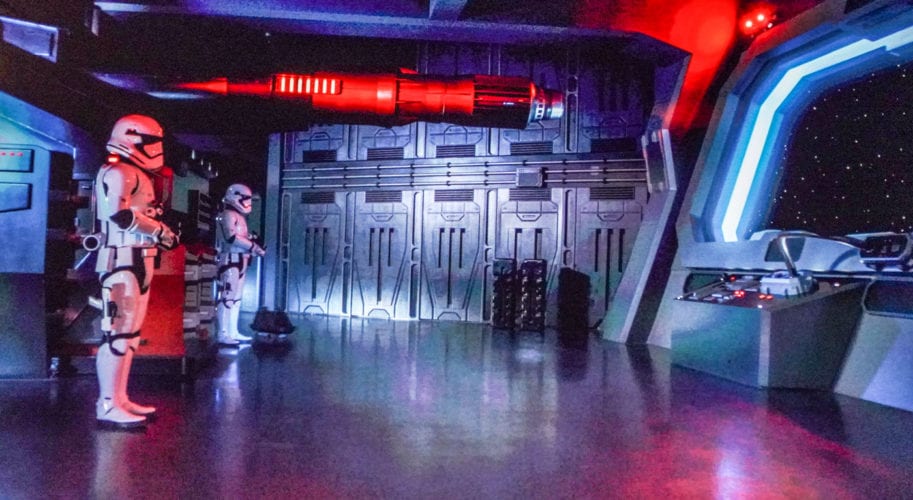 The transports will encounter Kylo Ren yet again as he swings his lightsaber towards them, causing visible damage on the walls around. Kylo will nearly grab the guests, but a massive explosion will cause Kylo to get caught between a broken piece of the Star Destroyer and the guests, allowing them to escape again. The Resistance is going to give the transport instructions to find an escape pod and the vehicles will input the coordinates and take off toward your goal. The transport almost makes the escape pods, but Kylo Ren attempts to stop you one final time. Kylo uses the Force to hold up the room as he makes his way to the transport, but at the last second a wall collapses and he is forced to focus all his energy on not getting hit, allowing your transport to make its final escape. 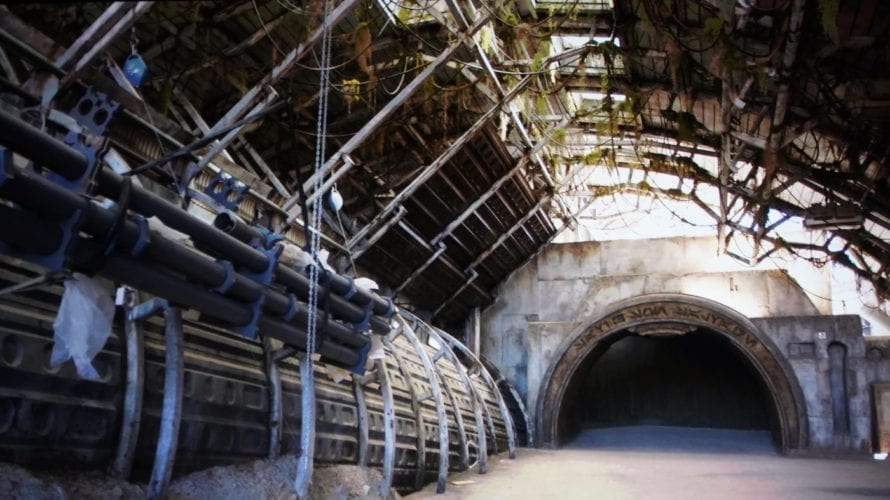 The two transports will then back up aggressively into the escape pods, jettisoning the guests back down to Batuu. This is where the rumored Tower of Terror style fall comes into the picture. The drop will be accompanied with additional screens to help make the guests feel as though they’ve just been shot off into space towards the planet. The escape pods will land in an old warehouse on the planet, where the two transport vehicles will exit the pods and take the guests to the unload area. This area is rumored to be somewhat visible to guests not riding the attraction and will potentially be where guests can retrieve their photos from PhotoPass.