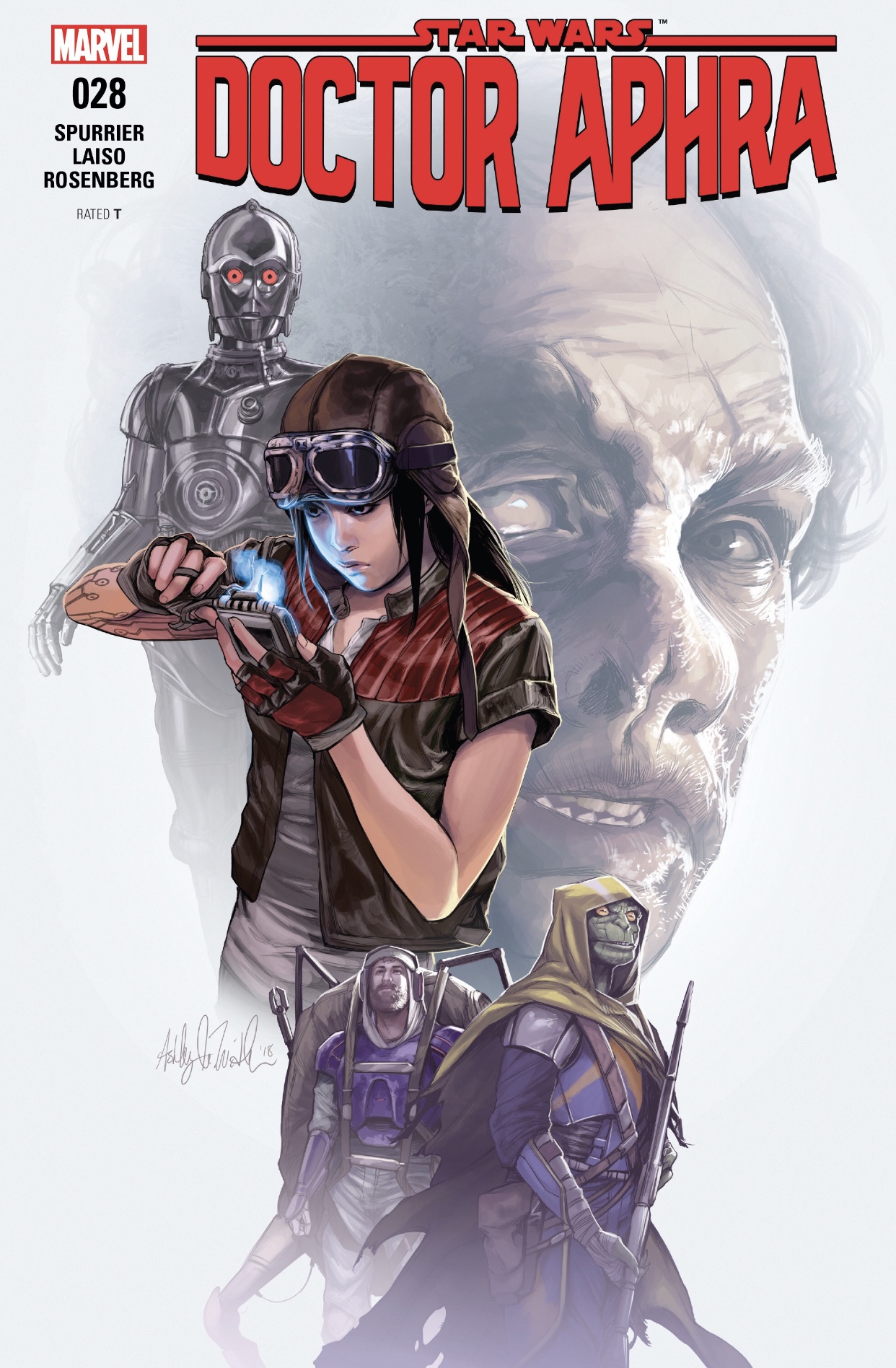 Doctor Aphra continues her death run in the bowels of a sprawling metropolis Milvayne, desperate to find a distant specialist capable of disarming the explosive device keeping her paired to psycho-droid Triple Zero. It’s been a rough ride for the doctor, all the while being monitored by the sadistic Cornelius Evazan for his entertainment. The doctor and droid have found an unlikely ally in a young girl and her beast, offering to carry them across the cityscape to reach their salvation. Unfortunately, Doctor Aphra is hunted. What’s new? SPOILERS AHEAD…. 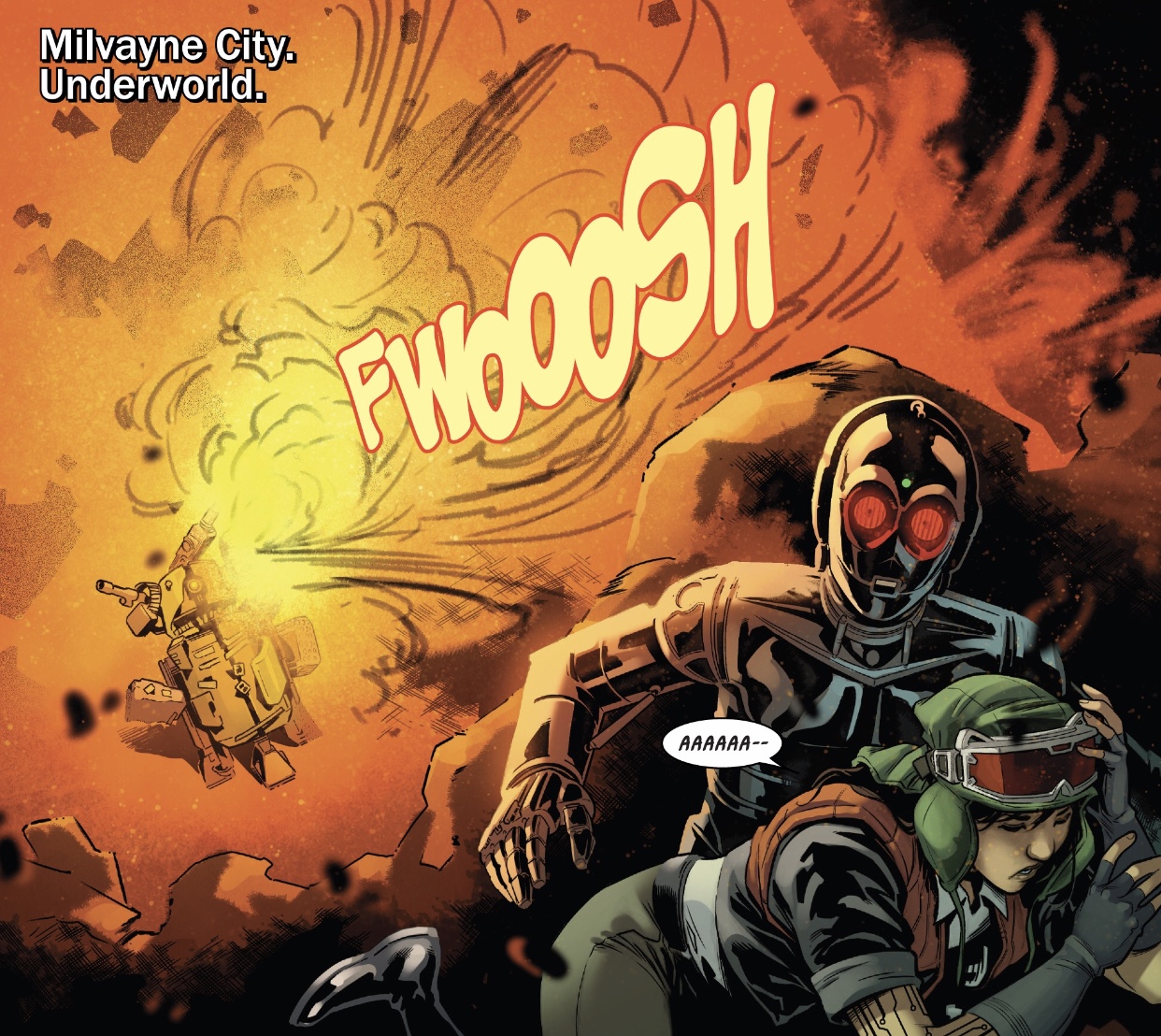 Not only has a hook-spore resurrected Tam Posla tracked Aphra, Triple Zero’s counterpart, BeeTee, has returned. The astromech killer is not himself, though. He’s joined Tam Posla, but ends up taking the assassin out while trying to attack Aphra and Triple Zero. Posla survives and pursues his targets, but he’s not the only hunter after Aphra. The competition steps in. 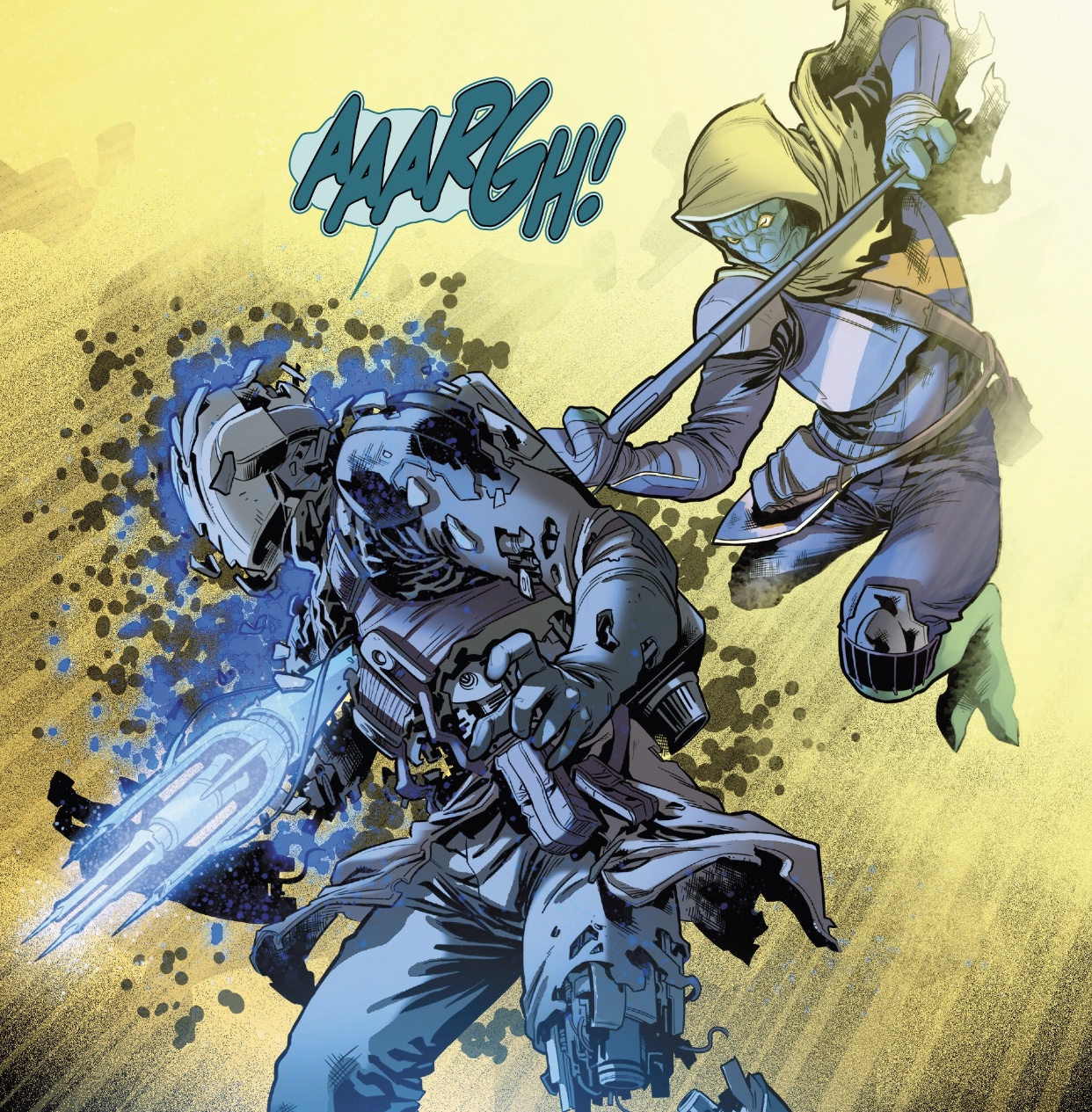 Nokk makes quite an entrance as she slays Posla. I love this couple and am so happy to see them in a prominent role. Nokk and her husband, Winloss, usually track monsters, but they’ve made an exception by going after Aphra. They owe her and are happy to use their skills to bring her end. Tam Posla is not going to stand in their way. They managed to take out Posla, but BeeTee is back and he’s ready to torch them both. They arm themselves with something appearing to be a combination of rifle and cannon. After a brief disagreement of who will take the shot, the couple agrees to take the shot together. Awww. 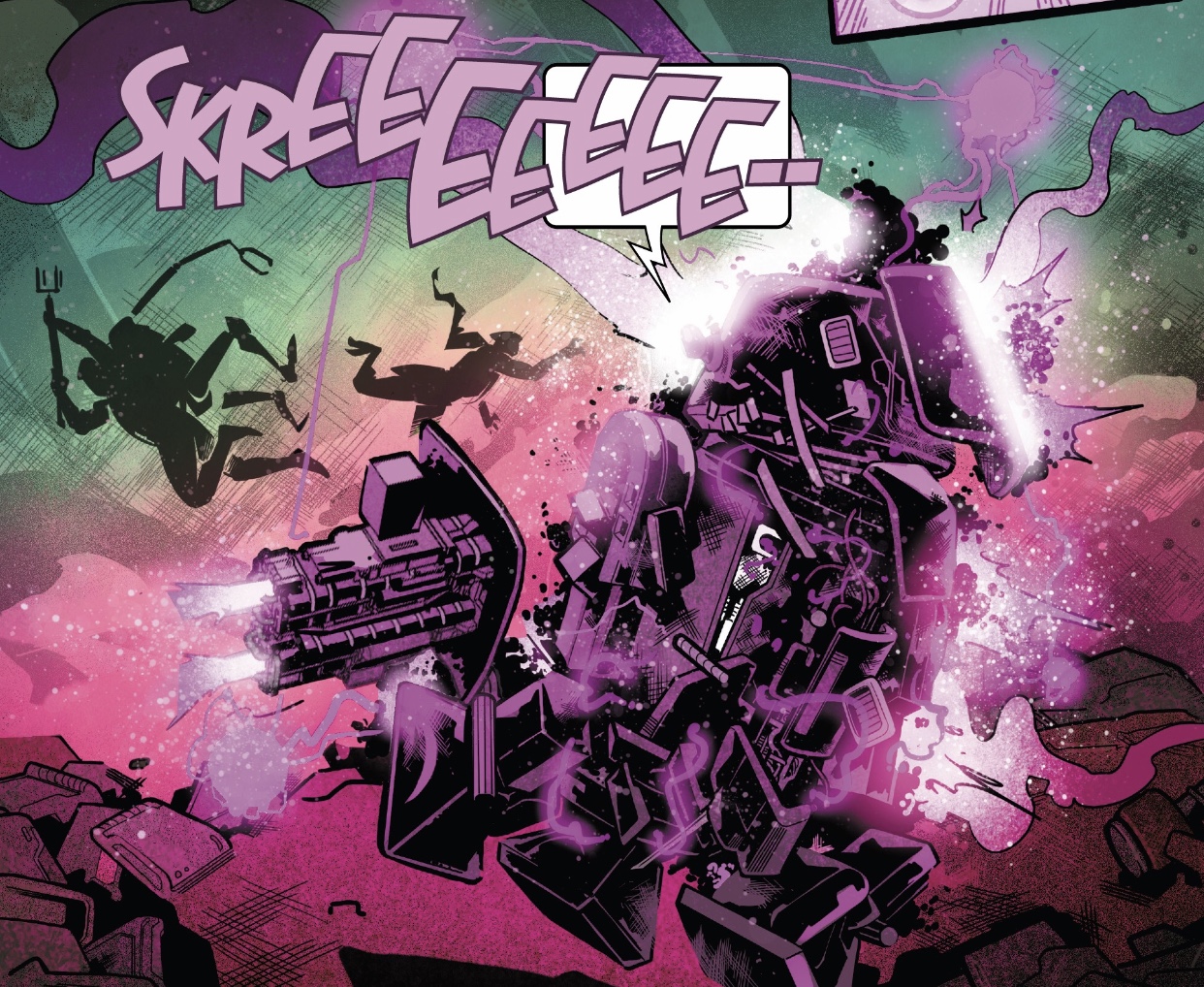 Bye, BeeTee. No, I don’t think this is the final end for the cruddy little droid, but I wish it was. I guess I’ll make my obligatory “these droids are boring, please get rid of them to make room for other characters” statement. We’ve had our fun, let the past die. Triple Zero wants to go back, but Aphra urges him to press on and they try to find their way back to the young girl who promised them transport.

Little do Aphra and Triple Zero know that Evazan has put his sick game on display for people watching around the galaxy, hacking into the Holonet and interrupting people’s programming like a proper comic book villain. There’s a great spread of panels where several programs are interrupted for Evazan’s pronouncement. I wonder if a certain Dark Lord of the Sith had his HoloNet turned on when Evazan hacked into it. He and his best buddy, Ponda Baba, sit and take in the spectacle of Aphra moving toward what they assume to be her death. Ponda’s just been fitted with a new artificial arm. 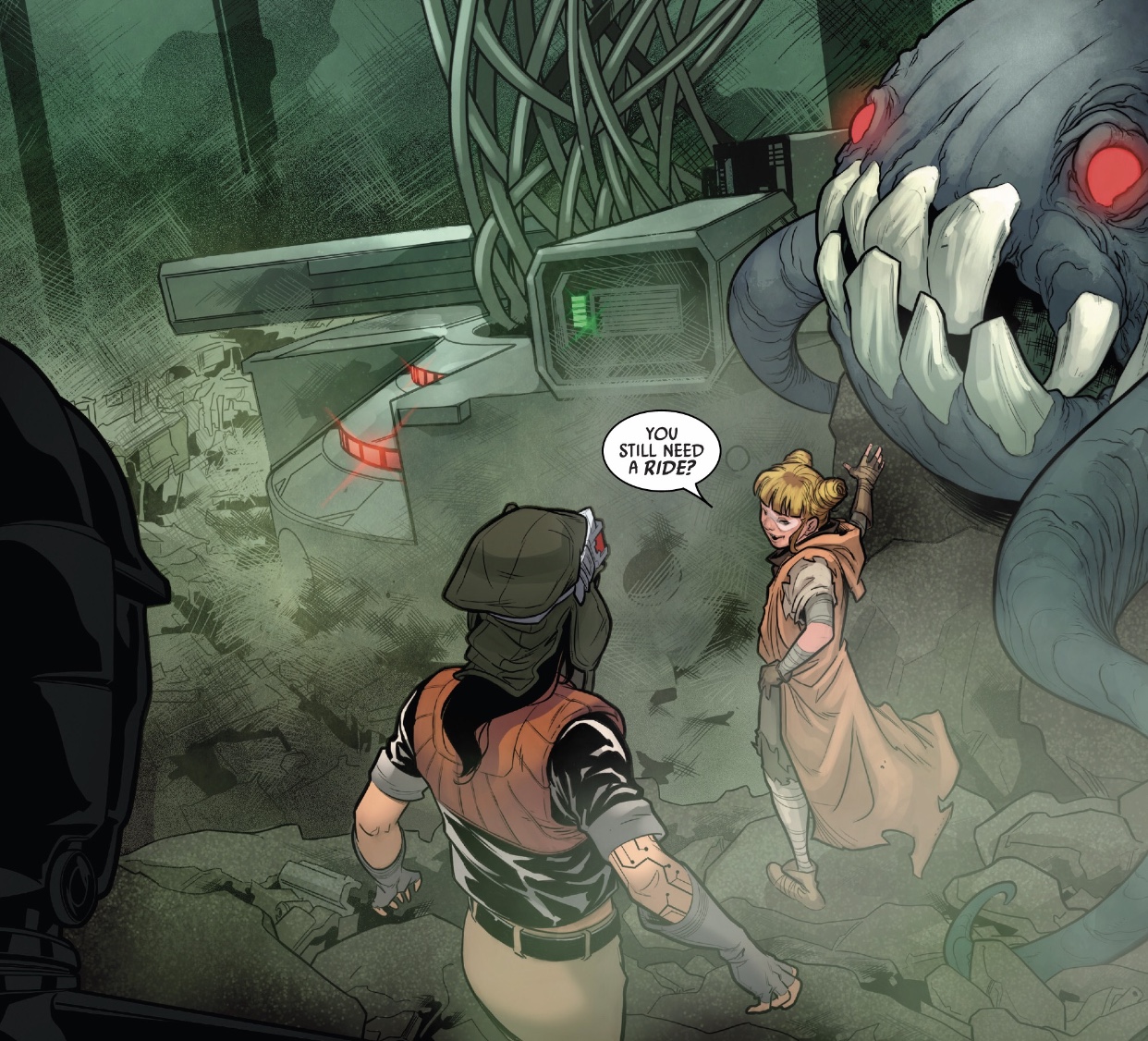 Aphra and Triple Zero catch up with the young girl, Vulaada, who has commandeered an old Imperial vessel. It’s one I’ve never seen, designed to remove and redistribute smog from the upper levels of the city to lower levels where the poor take shelter. Sounds very Imperial. Only seven-hours remain in the countdown to Aphra and Zero’s detonation. Vulaada is confident she can get them there in time. Aphra and Vulaada have some time to talk and Tolvan comes up. The doctor can’t help but search for Tolvan and she’s definitely trying to fight the feelings she has. Aphra wants to be a loner, but she’s not, and she’s connecting with her new friend, Vulaada.

Doctor Aphra issues are usually very chaotic and busy, which distinguishes them from every other Star Wars title, but I enjoyed these quieter frames where Aphra and Vulaada find their commonalities. When Aphra’s betrayal of Tolvan comes up, as it’s bothering the doctor, Vulaada shrugs and doesn’t see the big deal. Aphra warns Vulaada that morality is something you can only run from for so long in your youth. The choice between good and bad have become more distinct for Aphra and she tries to convey that Vulaada might not want to go down the same road she did. The emerging morality in Doctor Aphra is my favorite part of these stories. My predictions remain that she will either end up in the Rebel Alliance or happily ever after with Tolvan. 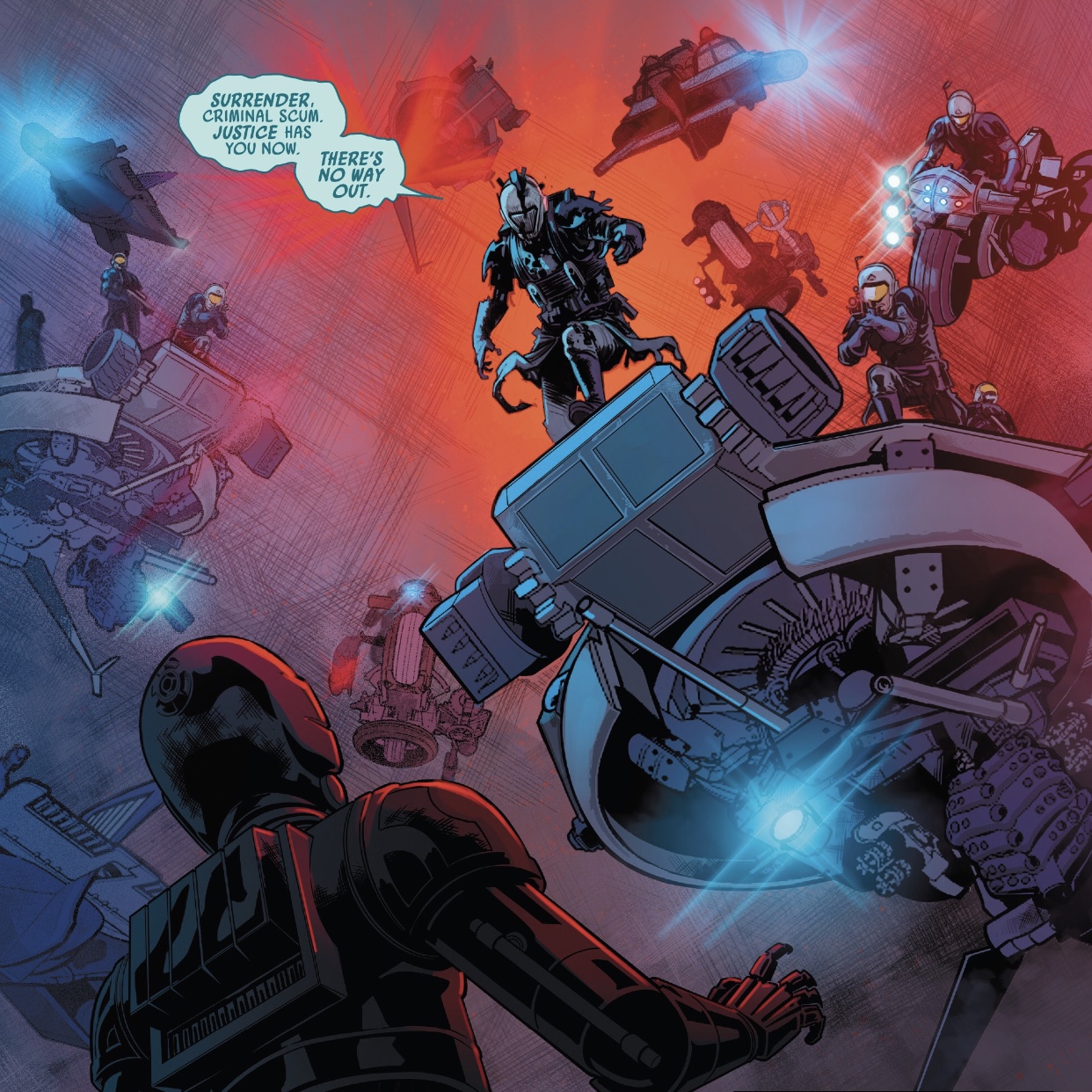 The art by Emilio Laiso and Rachelle Rosenberg in “Worst Among Equals” has been excellent. This frame was my favorite. Hook spore Tam Posla is determined to get justice. I’m not sure Posla and the hook spores are indistinguishable at this point, but they Aphra. The local authorities have born down on Aphra and Triple Zero, as well. If you remember from previous issues, the local justice system is swift and brutal, which is how Aphra ended up in the lower levels of Milvayne, to begin with. If you’re keeping track: Beetee, Tam Posla, hook spores, Nokk & Winloss, and now the Milvayne law enforcement is after these two. Not to mention, they’re wired with explosives by an evil doctor.

Add double-crossed to the peril. Aphra is livid she put her trust in Vulaada and ended up double-crossed. Worst of all, Aphra knows that she’s done this to so many people and she probably deserves it. Vulaada isn’t exactly happy about it, saying that it was a choice between being able to eat or not. She’s a child, so I can’t say I blame her. There was no reason for her to believe Aphra was anything other than a fugitive with a psycho-droid at her side. The last frames are brutal, as Vulaada smacks Aphra in the face with the butt of her blaster and knocks her out cold. Under the red glow of brutal law enforcement, Vulaada says “Damn everyone else”.

This was a great issue of Doctor Aphra. Writer Simon Spurrier balanced all the bigger elements of action and story so the reader can just sit back and enjoy the ride. As much as I don’t care for these droids, I wasn’t distracted by them, as Aphra’s emotional state was amplified in each frame. We often see her at a disadvantage, but we rarely see her so vulnerable. No wisecracking or clever trick is going to help the doctor survive. There’s only one solution and if she can’t accomplish it, she’s dead. Everything is sure to pick up in the next issue and I have to say I wouldn’t mind it if Vulaada ended up sticking around for future arcs. There’s a great dynamic there and I hope they explore more of it. 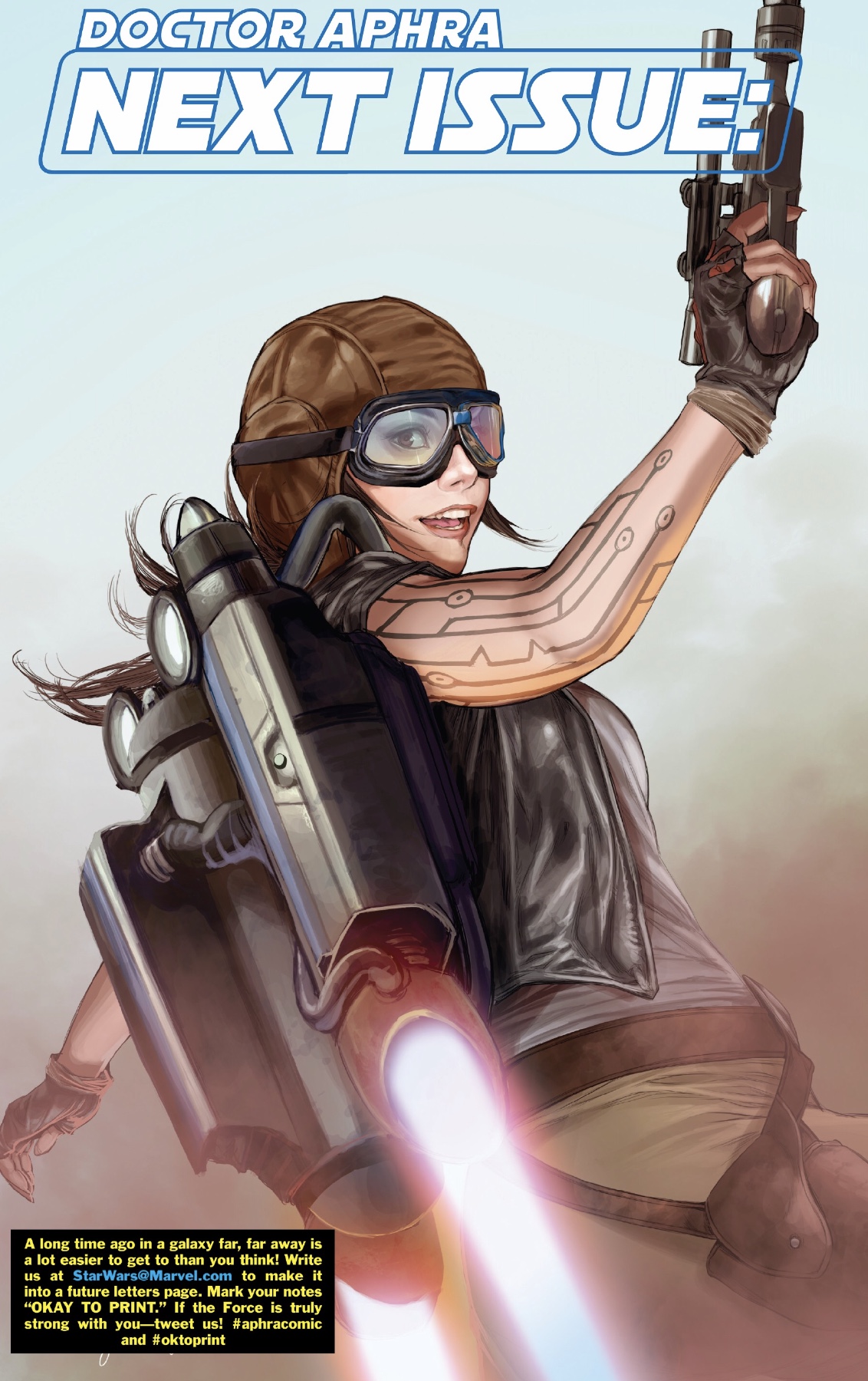