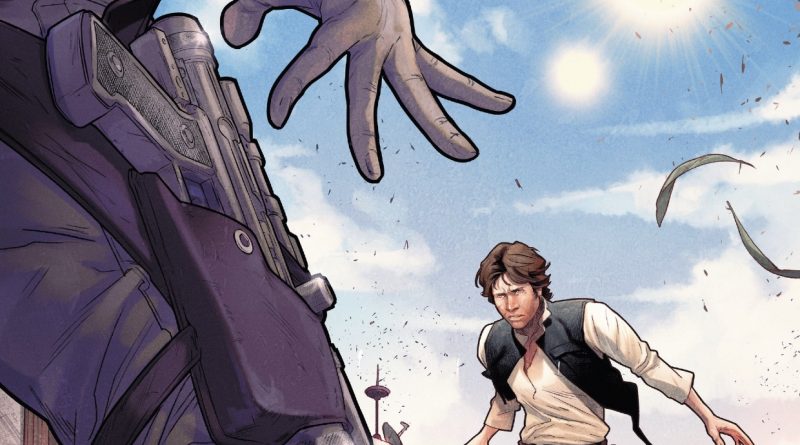 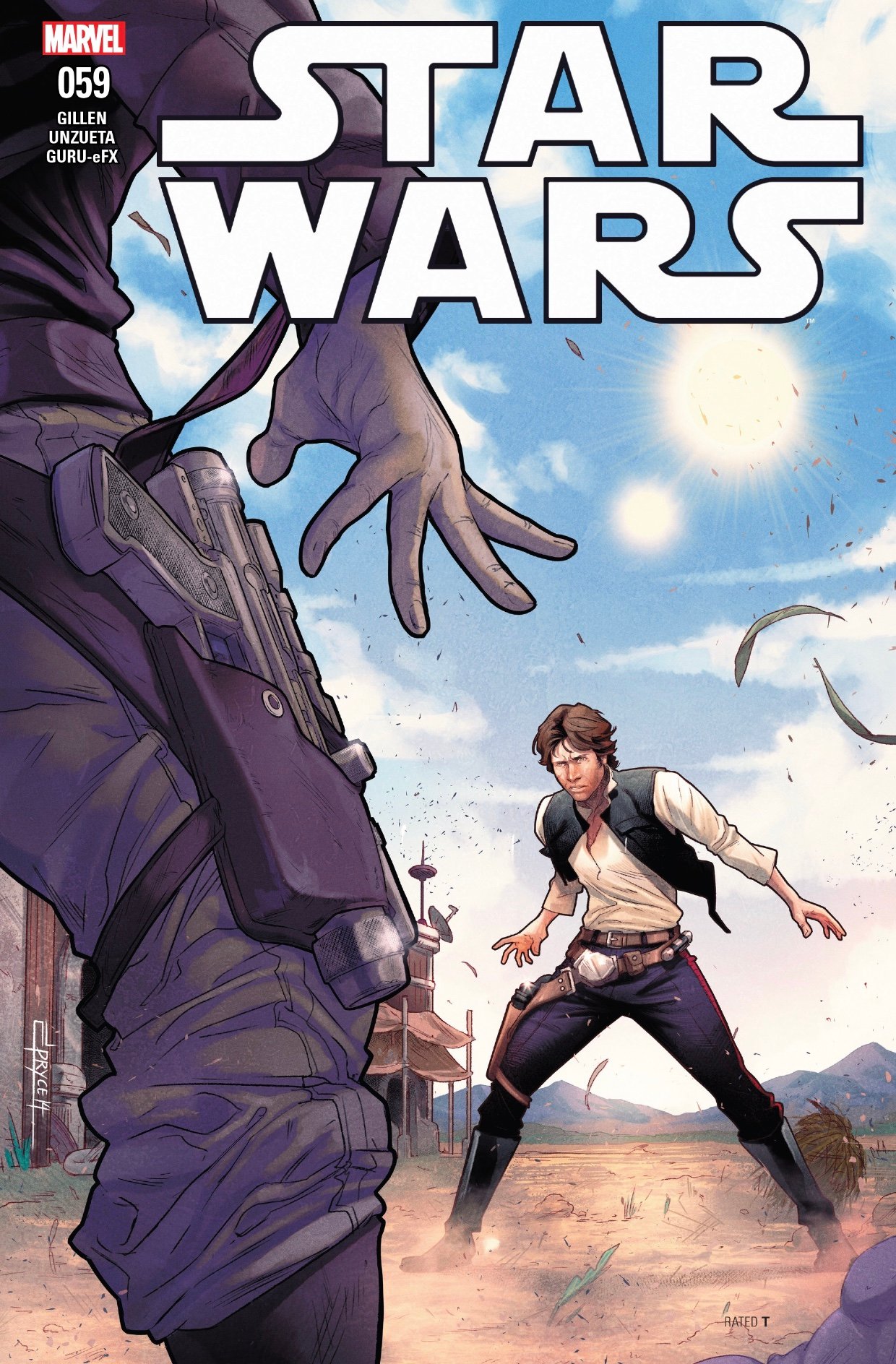 The long walks and lazy days for our heroes in “The Escape” is about to come to an abrupt end this week in Star Wars #59. The last few issues have given Leia, Luke, and Han a reprieve from dodging TIE Fighters and Sith Lords. Luke’s been ready to get back into the fight, and we learned in the last issue Leia has been plotting her revenge on Queen Trios. Han and the rest of Hubin are just catching up. With the arrival of an old ally, the turmoil of the galaxy seems to have found them, once again. SPOILERS AHEAD….

If you aim for the princess, you better not miss. Han thought he was coming into her quarters for a nightcap, but Leia let him in on the meticulous planning she’s been doing since they arrived on Hubin. While Han’s been drinking beer and chopping wood, Leia’s been poring over raw intelligence the Rebels obtained from Mako-Ta before it was destroyed. Leia doesn’t want to kill Queen Trios, she wants to hurt her. Her plan involves bringing the industries of Shu-Torun crashing down. Leia knows what happens to planets the Empire no longer deems useful. 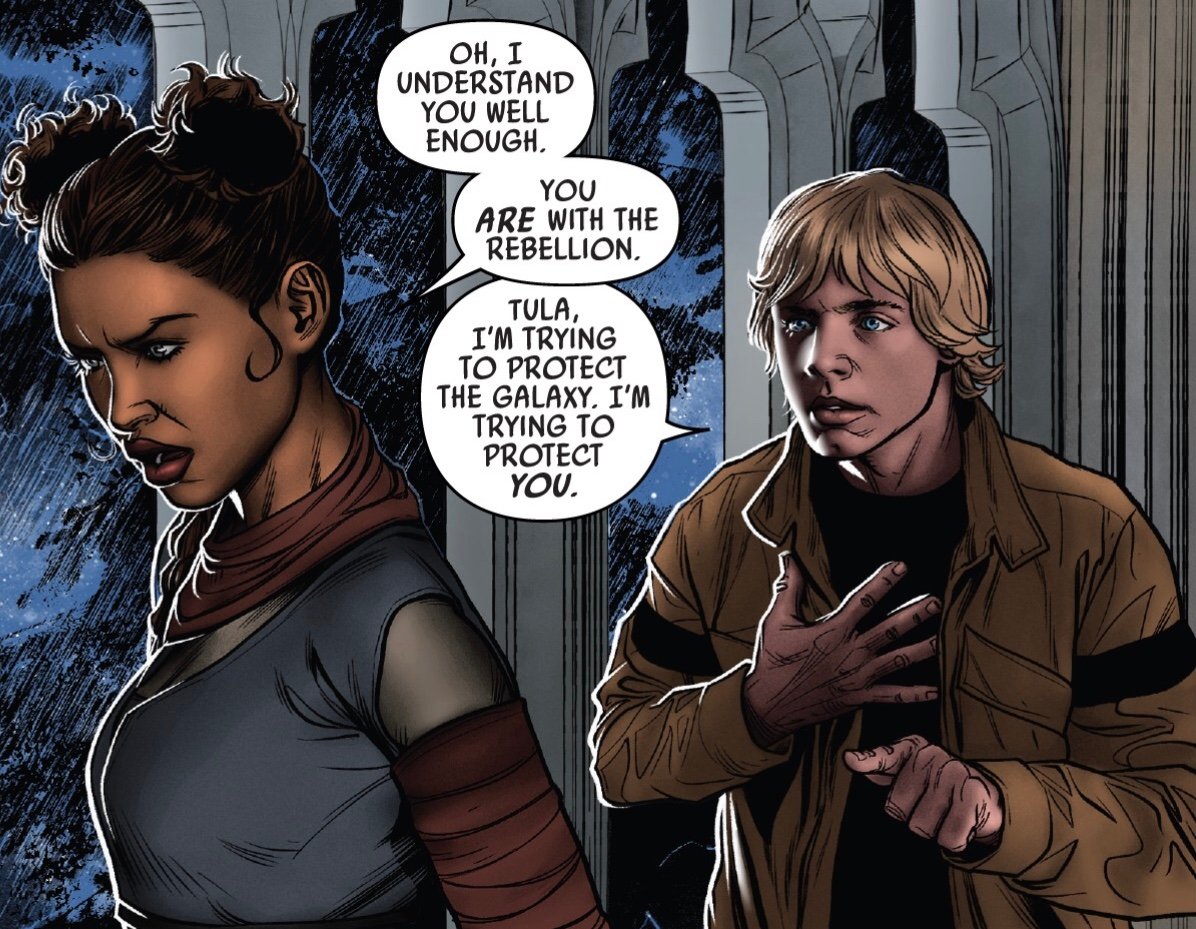 Luke has been busy himself, trying to make contact with the Rebellion. We all know Luke’s had his fill when it comes to the slow pace of farm life, so I’m not surprised at all he wants to take up his lightsaber and go Vader-hunting. Tula is not happy that Luke has broadcast his location on Hubin across the galaxy.  She says that he’s being selfish and that he has a savior complex that the galaxy will fall apart without him help lead the fight against the Empire. I thought this was a cool seed of morality we later see grow into Luke’s selflessness of stepping back from the galaxy. Tula is angry and nervous that Luke’s signal will reach all the wrong people. Tula reminds Luke how dangerous good intentions can be, especially his when it comes to rejoining the Empire.

The next day Luke, Leia, and Han reconvene to share their plans. At least Leia reveals hers, and like a total hypocrite, Luke scolds her for not telling him sooner. Never mind the fact that Luke doesn’t let her know that he’s just broadcast their hiding spot across the galaxy. While this discussion unfolds, Han gets into it with a local after a crowded bar causes them to collide and spill their drinks. The man challenges Han to a duel, as we’ve seen in earlier issues that combat of some sort is used within their community to resolve disputes. Han seems surprised by the elevated mortality of it, but he’s not one to shy away from a gunfight. Not eager to kill one of the locals, Han stuns him, but the locals are not happy with Han for stunning him. They expected someone to die and think what Han did was cowardly. 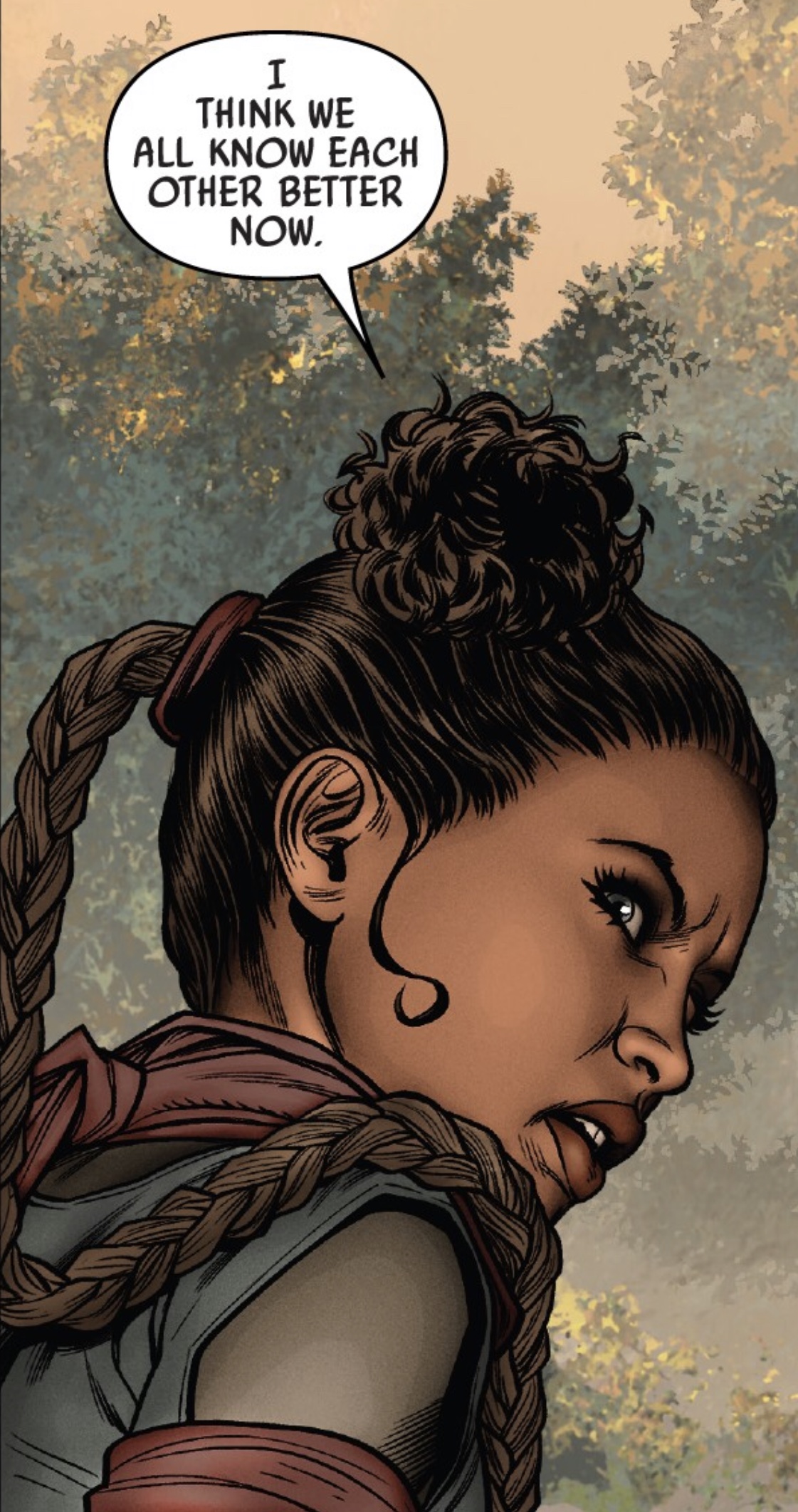 Tula has quickly soured on Luke, Han, and Leia. She’s gone from dreaming of what lays beyond Hubin to dreading it. Her instinct to fiercely protect her people and their heritage has been triggered. I really like this shift in dynamic. Everything was going too smooth, so I’m glad that Tula is challenging the three of them to realize what they may have brought with them to her world. When she meets with Thane to let him know there is tension between their visitors and locals. Thane mentions that it’s time to resort to their contingency plan. Hmm…

Back at the Markona mansion, Thane continues to try and play gracious host, still dining with our heroes. He’s done dealing with Luke’s hypocrisy though. He reveals to everyone what Luke has done by sending a signal out into the galaxy. Leia’s not happy and it’s pretty clear that something is about to go down. Before things get too heated, they are interrupted by the arrival of a shuttle. Thane dons the spacesuit we saw him in when Leia, Luke, and Han first arrived. 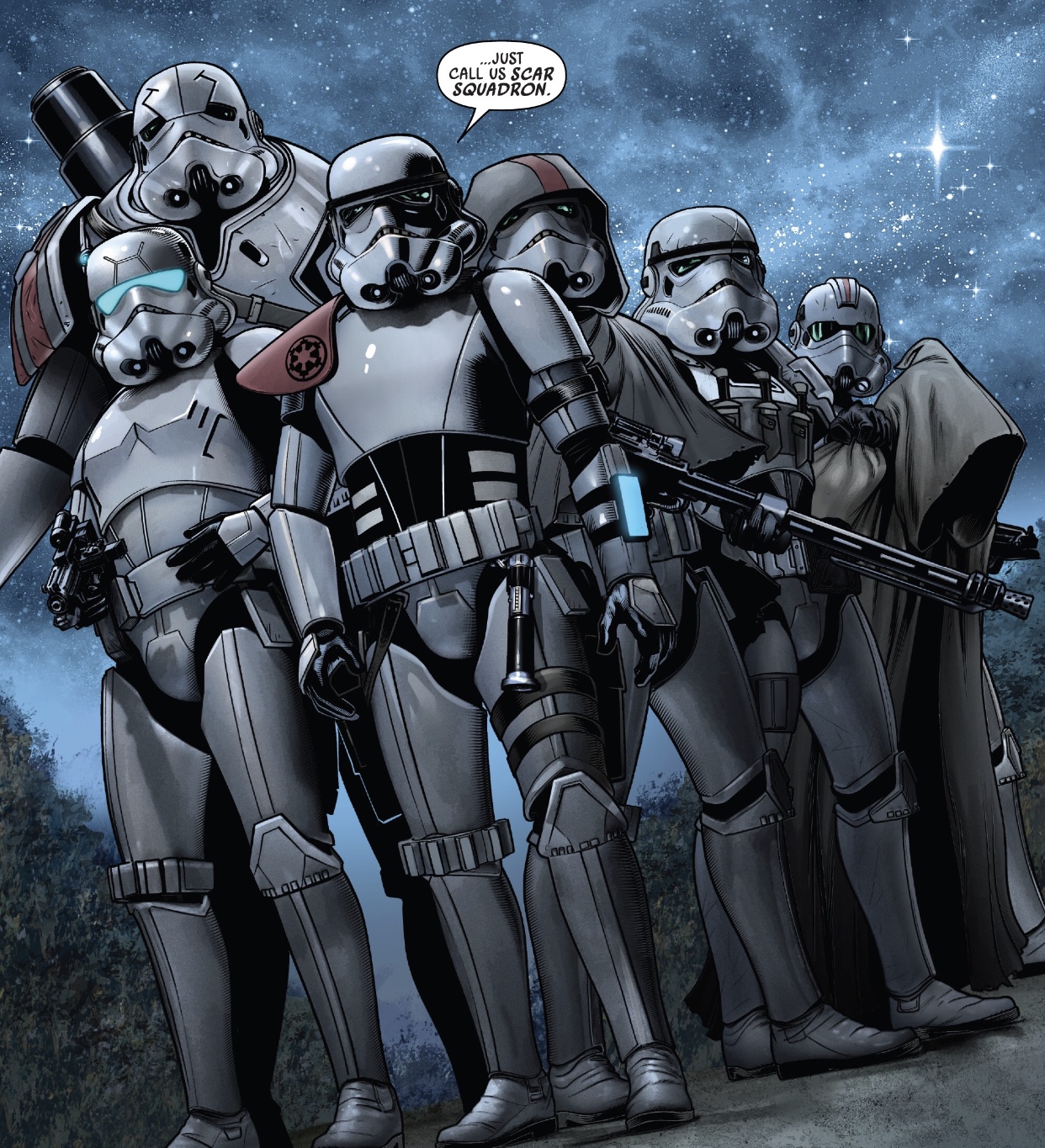 I feel like I need this poster. Yes, SCAR Squad is back. This nasty group of bucketheads has given our heroes a lot of trouble, and next to Darth Vader, probably the last people Luke hoped would answer his signal. Though it wasn’t his transmission that brought SCAR Squad to Hubin. 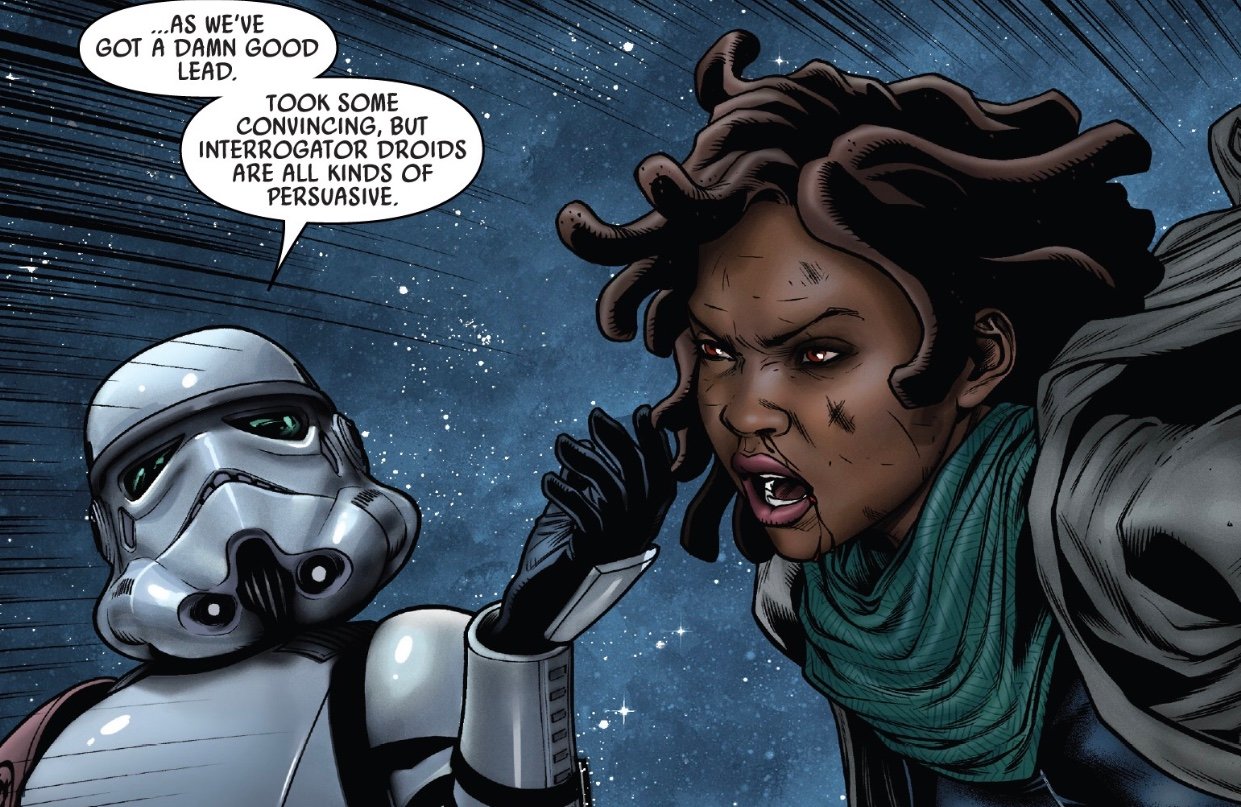 They caught Sana! I guess I should be careful what I wish for, as I feel she’s been sorely missing from the titular Star Wars series. I doubt her captivity will last long though, so I am happy she’s at least reunited with these three. Since the Empire didn’t pick up Luke’s signal, maybe someone else did. Chewbacca and the Millennium Falcon are no doubt searching the galaxy for them, so let’s hope Luke’s signal will bring some help. Though, I think having Sana Starros in the mix now is a good start.

Once they see Sana, our heroes reveal themselves to SCAR Squad. After a quick exchange, Tula and Thane take over. Tula stuns Han and Leia, leaving Luke shocked from her turn on them. Thinking he’s been sold out, he comes to realize that Thane just wanted to clear the field for Hubin style justice. Tula states that since they are both guests on Hubin they will resolve their conflict by that law. They must duel. Luke doesn’t hesitate and neither does Cav (the melee trooper of SCAR Squad). 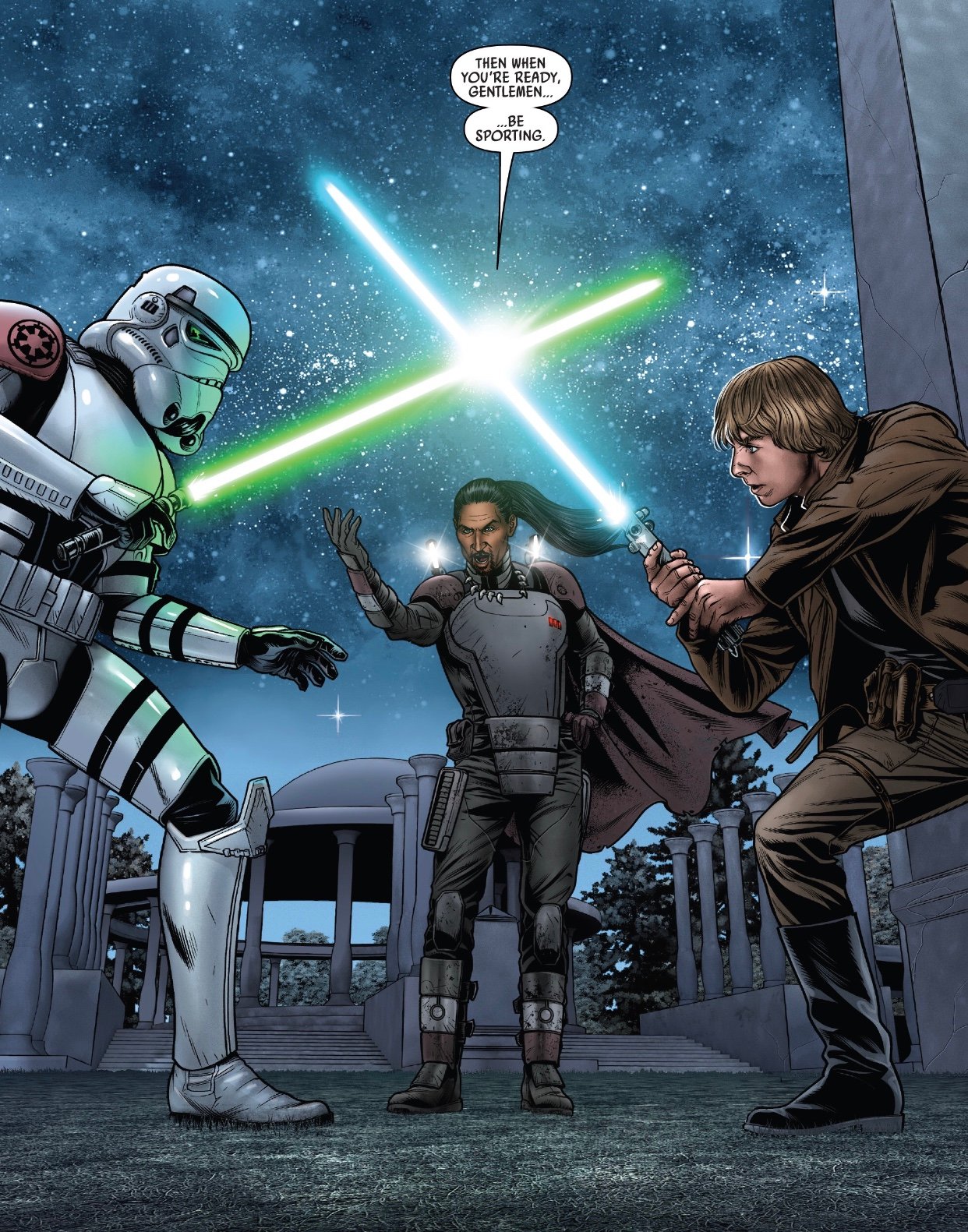 When this series first started, I always thought it was kind of silly when Luke would use his lightsaber to duel. He seems so fish-out-of-water with it in The Empire Strikes Back, but I’ve come to think it’s a great way to retcon why Vader is actually challenged by him in their duel on Hoth. That’s just my opinion, but seeing Luke get this kind of experience adds to my enjoyment of that film and appreciation for the character. I do think it’s kind of goofy to give a lightsaber to a stormtrooper though. Nothing in my head can see how Vader would ever be cool with that. Whatever your take on Luke’s lightsaber skills at this point, this should at least be entertaining and I love the frame pictured above.

I really enjoyed this issue and how the tables have started to turn. It was nice for us to catch our breath after “Hope Dies”, but I’m ready for these folks to get back in the fight. I also thought writer Kieron Gillen did a nice job of turning Tula from dreamy-eyed young person to protector of Hubin. The Markona family of Tula and Thane already intrigued me but now I hope we get even more of their story. The best parts of this series so far have been the moments when we learn more about them. The art of this issue also shined. As I mentioned, some of these frames would make damn good posters. Artist Angel Unzueta and colorist Guru-eFX have a great collaboration going and all these issues have had consistently good art since they came on board. “The Escape” is about to get crazy! 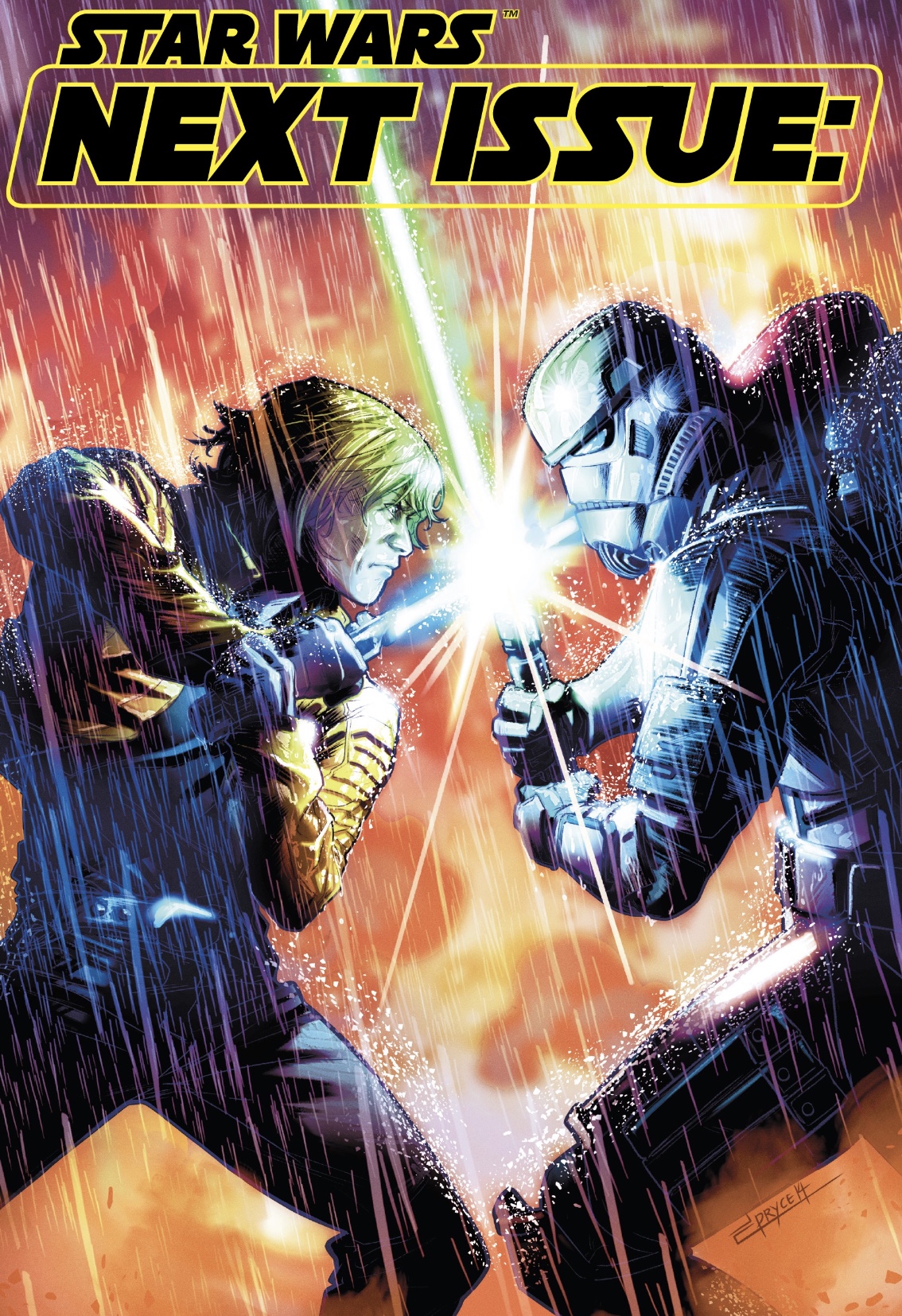 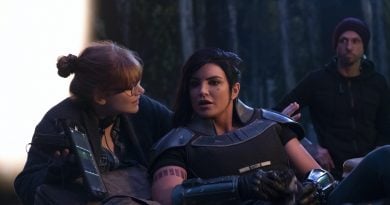 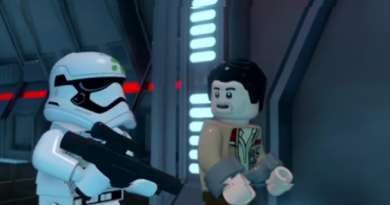