Review: Han is Back in His Element in Marvel’s ‘Star Wars Han Solo: Imperial Cadet’ #3 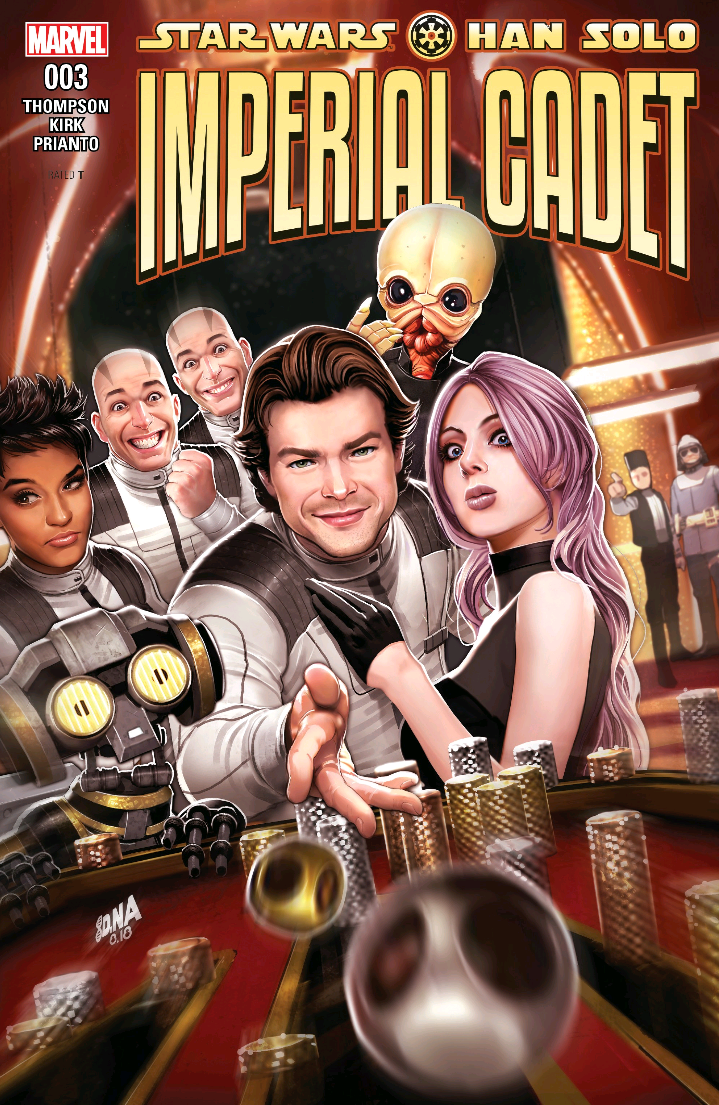 After a botched training mission at the Carida Academy, Han Solo and his peers are forced to sit out of their next training exercise. To add insult to injury, they are also required to pilot the transport hauling their classmates to said exercise. With the whole situation being Han’s fault for disobeying orders, the tension between him and his peers is palpable.

But when Han gets up during the night to complete all of the daily chores for his teammates, it seems that he may be trying to make amends. But what his fellow cadets don’t realize is that Han has a more selfish motivation for his actions then they are led to believe. Spoilers ahead… 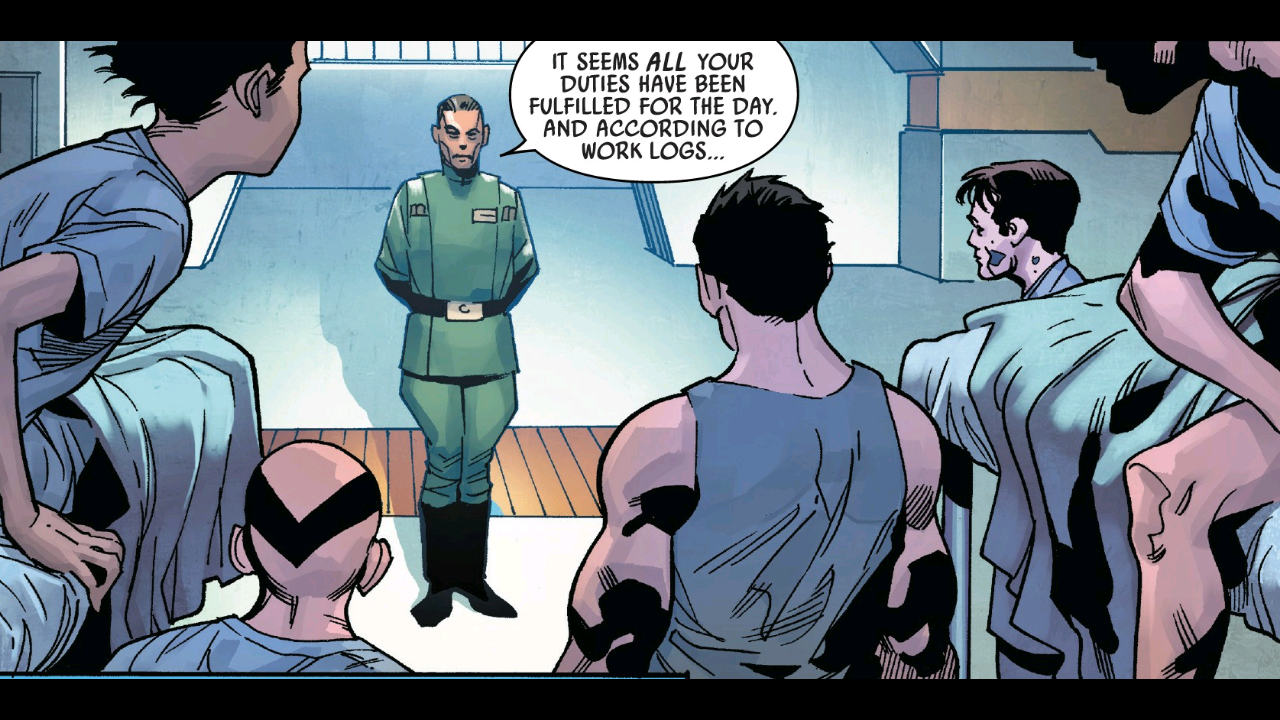 The morning before the team has to endure punishment, they are informed by their flight instructor that they have at least some reprieve, explaining that all of their chores for the day were already completed. Adding to the confusion of the situation, the work logs reflected that the hotheaded cadet Valance was the one to thank. Valance only lets the surprise show for a moment before taking full advantage of his situation and joining back with the others. Han, Hanina, and the Dree brothers would now be tackling their next mission without Valance. 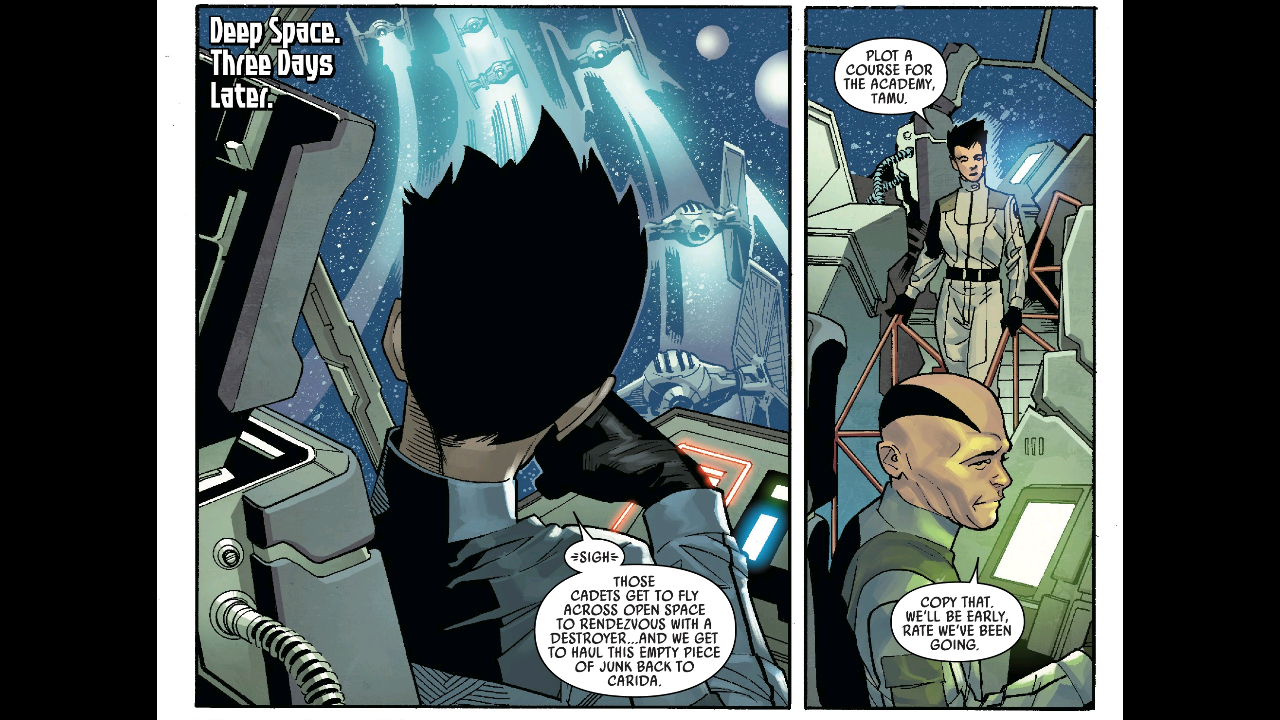 When the crew discovers that their ship was moving at an unusually high rate of speed, they make their delivery with a whole day to spare before they have to report back to Yurib. It is then that Han reveals that he has found a few day passes (typically afforded only to officers) that would allow the four of them to enjoy themselves for the day away from their duties as Imperial cadets. After an initial objection from Hanina, they agree to accompany Han to a nearby pleasure cruiser where a day of gambling and drinking awaits. 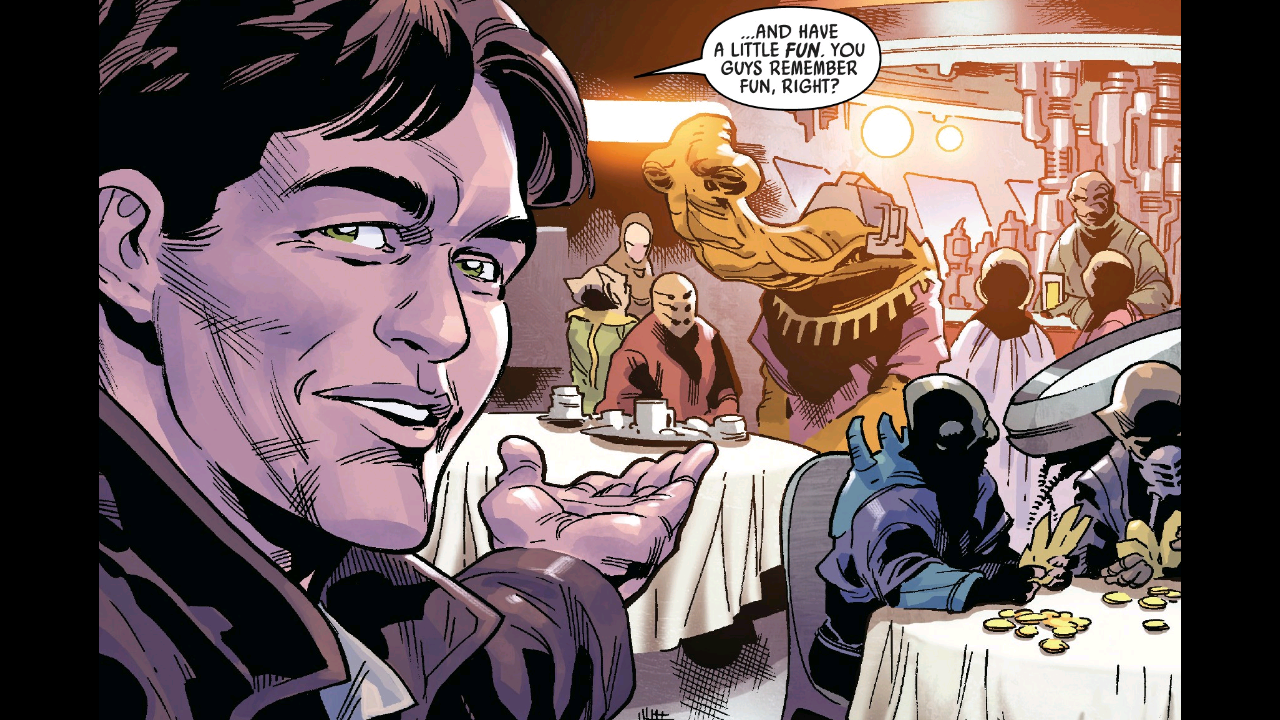 On the cruiser, Han and Hanina are able to bond a little bit over a game of cards, but it becomes clear that Han has a hidden motive for their little excursion. Han tells her about Qi’ra back on Corellia and how he orchestrated this whole thing just to find out some information about her. 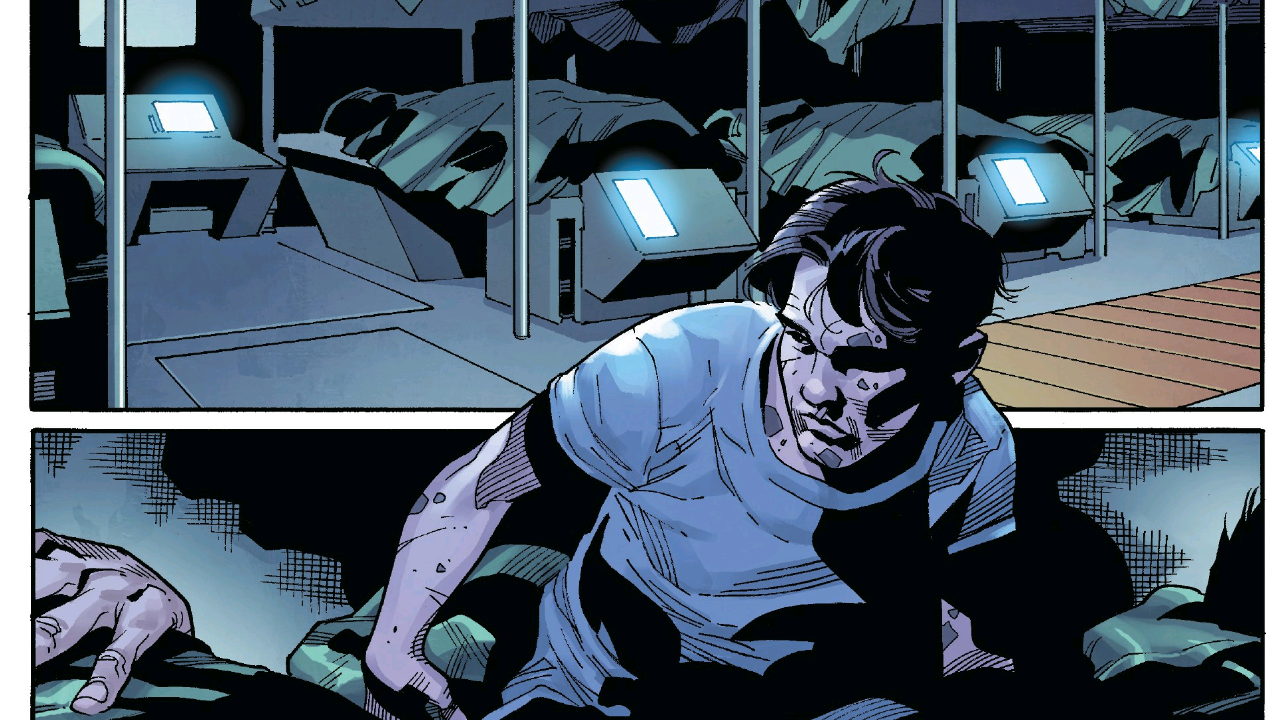 When Han was so graciously doing everyone’s chores at night, he was able to get a couple of things for himself. After slipping some parts while doing inventory to increase the freighter’s speed and stealing some day passes from the bags of a few showering officers, Han set the pieces in motion. Pinning the whole thing on Valance just served to take his unwanted company out of the equation. 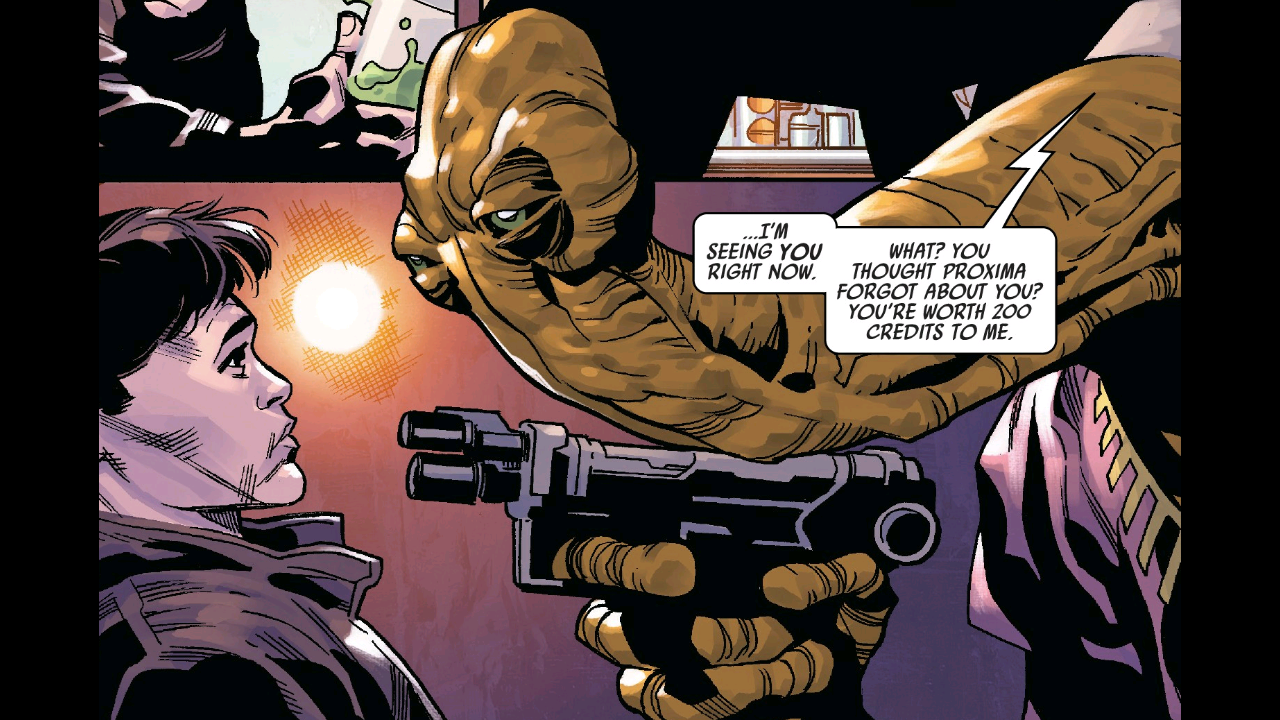 When Han runs into an old Ithorian colleague named Pjolan, he gets the answer he was looking for – Qi’ra is still alive. But things quickly turn sour when Pjolan attempts to claim the bounty on Han that was put out by his old boss, Lady Proxima. 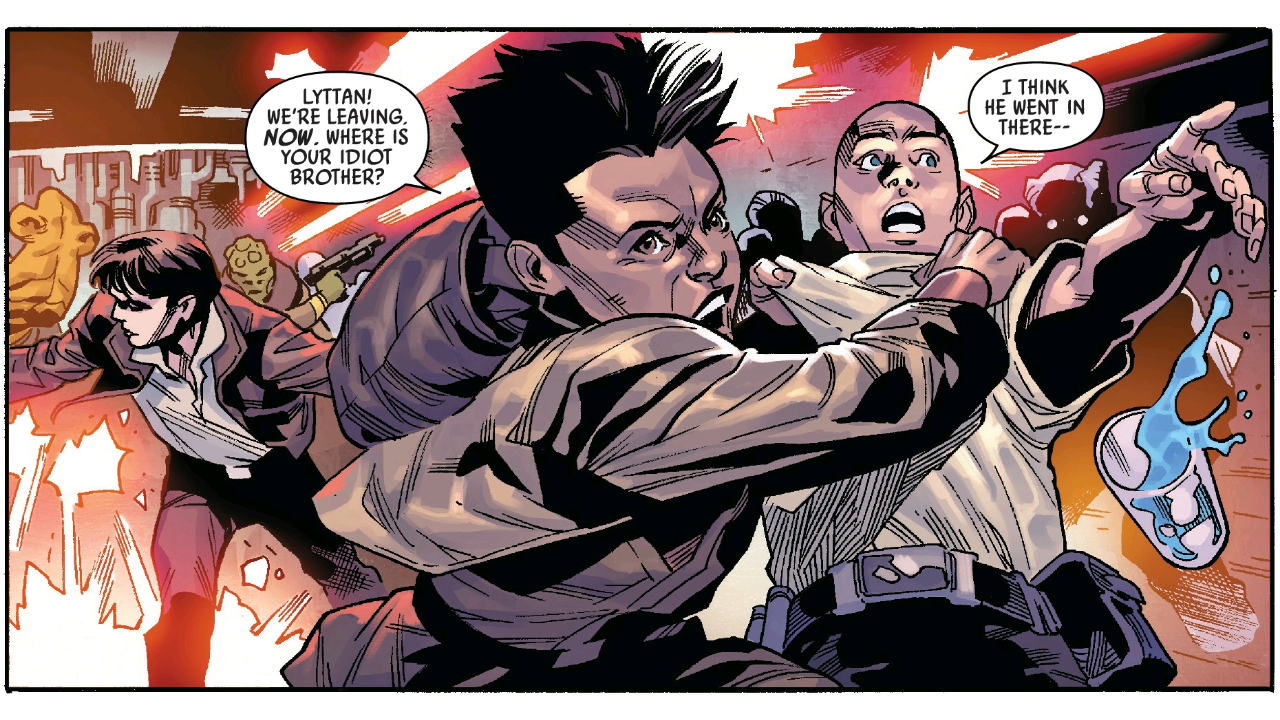 After surviving the initial insult of discovering how embarrassingly low the bounty actually was, Han makes his escape and grabs his team to head back to their freighter. His classmates were not idle though, especially the newly married Tamu who shouts his love to his new Theelin bride before departing in a rush. Knowing he would be betrayed by his contact, Han was able to throw Pjolan under the hoverbus to the Black Sun crime syndicate, allowing them to escape. 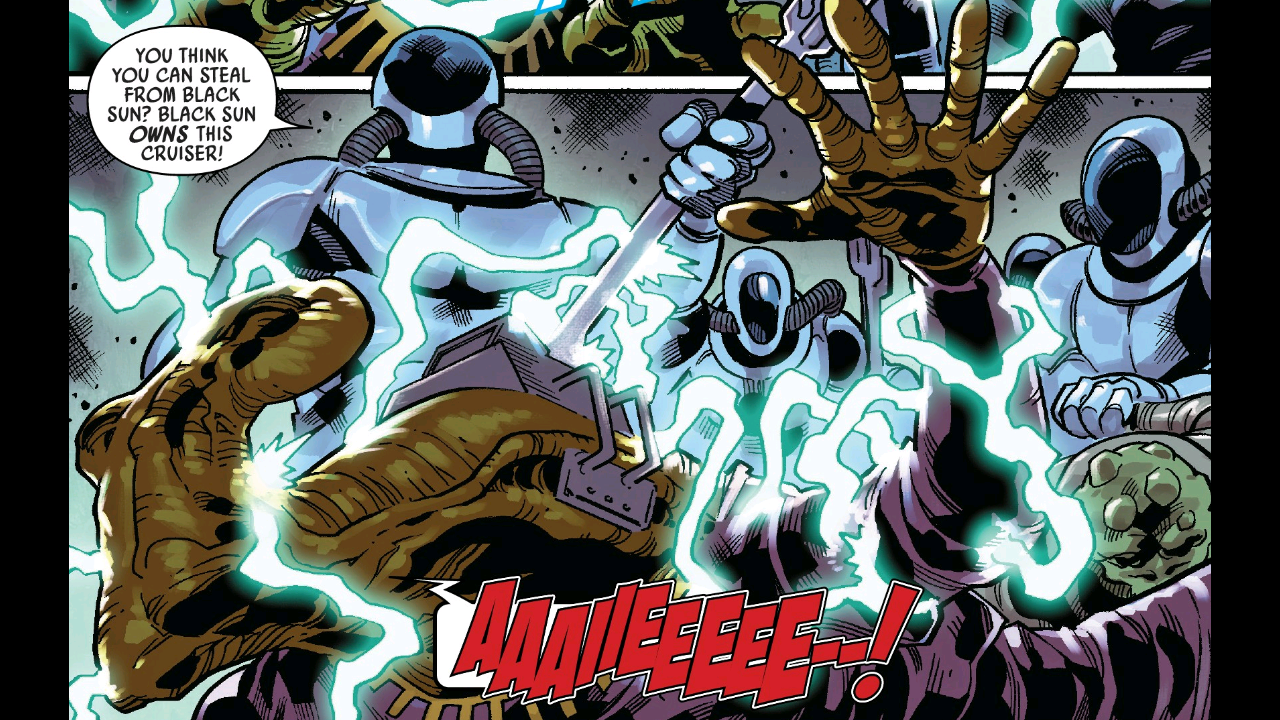 Back on Carida, Yurib is pleased with their success and is satisfied that the cadets are flight ready. The instructor tells them to grab their gear and head to the training room. They would leave the following morning for their next mission, and this time, it’s no drill. It was time to see what the cadets can do in a real combat situation against real enemies. 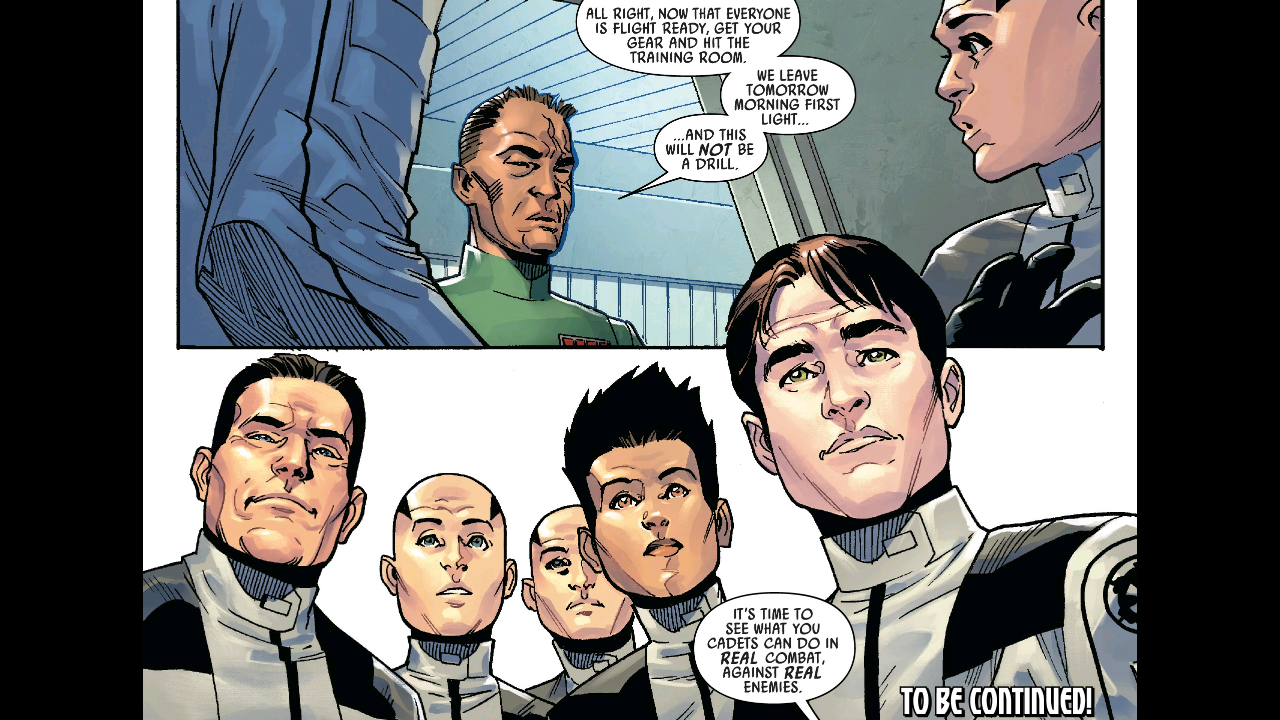 For me, this issue was much better than the first two, as I always find it enjoyable seeing Han in his element. Han may have a heart of gold, but he’s still a con man, and it was good to see that side of him portrayed here. This issue also served to develop the book’s characters quite nicely, and at this point, I find myself actually caring about what happens to them. The prospect of seeing Han in the cockpit of an Imperial TIE fighter in a real combat situation gets me excited for the next issue, and I’m looking forward to seeing the events that lead to his demotion to a grunt on Mimban. 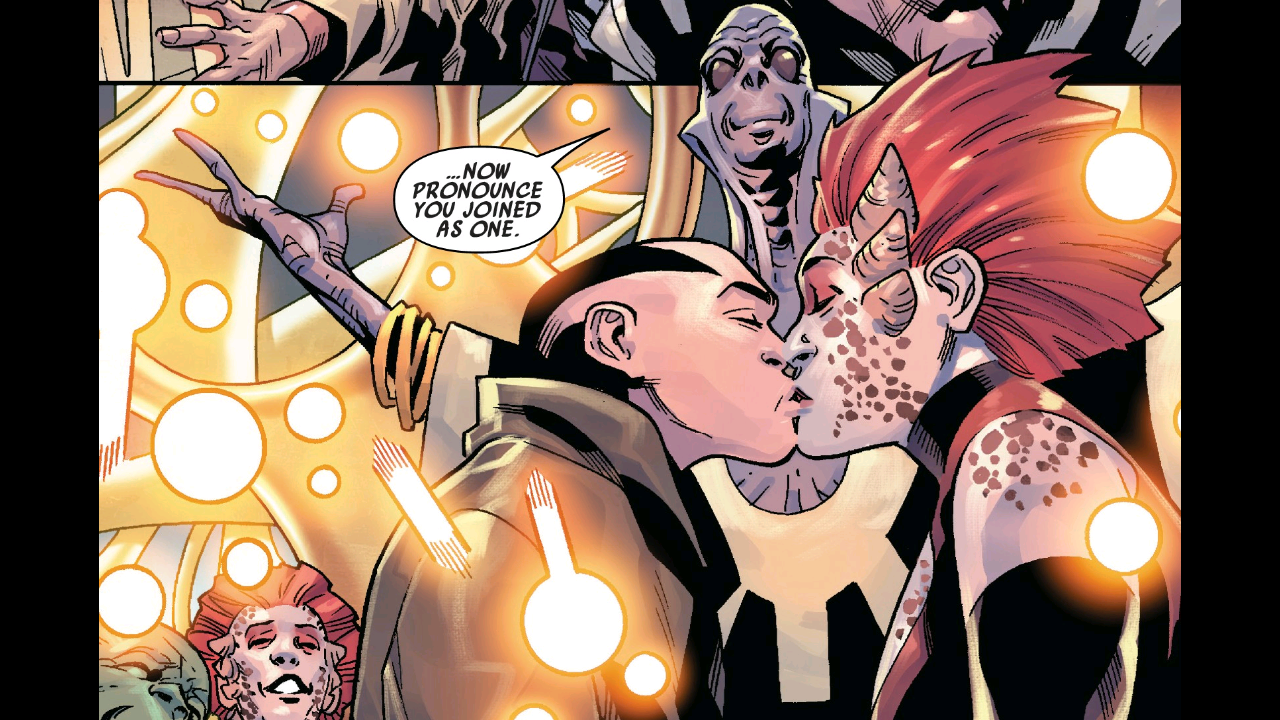 Writer Robbie Thompson delivers a solid issue this month in an overall decent story so far, and Leonard Kirk does a nice job on the artwork as well. The art style leans more towards capturing a certain aesthetic than trying to achieve anything close to hyperrealism, and Kirk remains consistent throughout with a style that visually captures the vibe of Thompson’s storytelling quite well.

Star Wars: Han Solo: Imperial Cadet #3 is available now in a comic shop near you or online at Comixology. Until next time, happy reading comic fans! 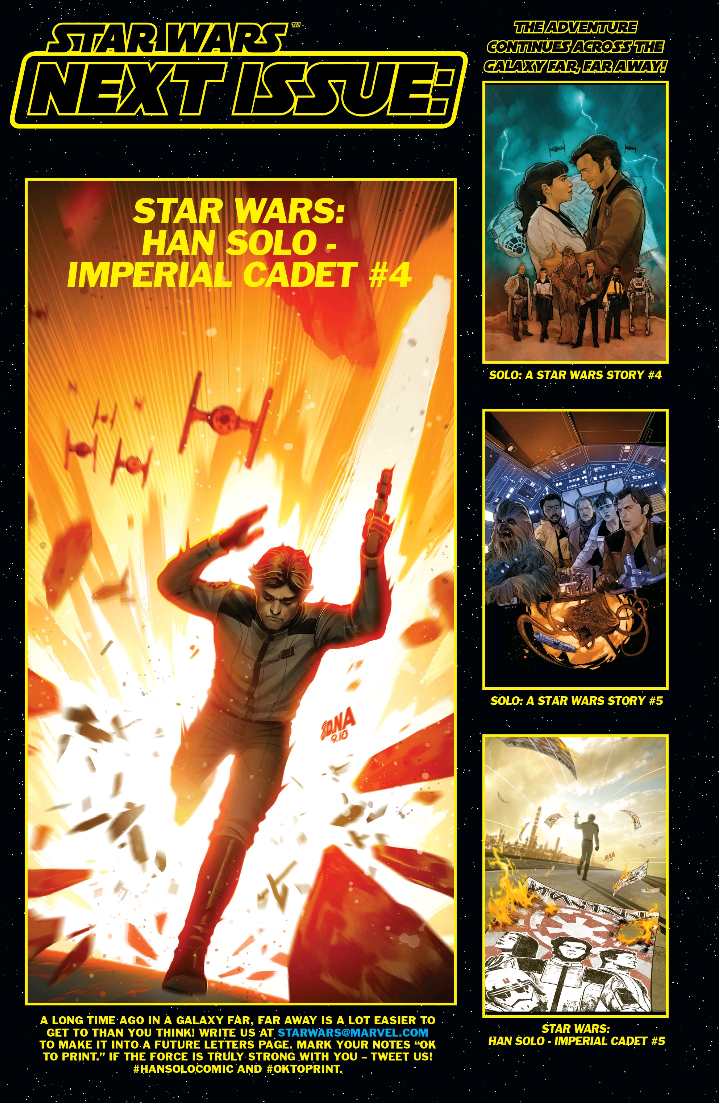