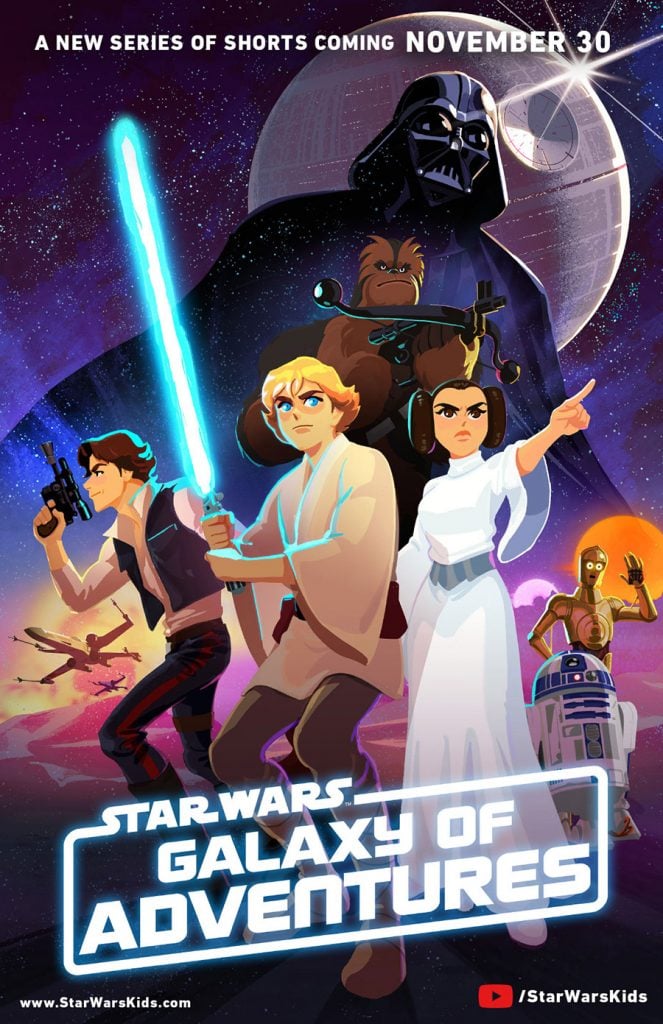 The recently announced series of animated shorts, Star Wars: Galaxy of Adventures, officially debuted today on the new Star Wars Kids YouTube Channel. Star Wars: Galaxy of Adventures focuses on introducing some of the most iconic and memorable moments and lessons from the Star Wars saga to kids. Featuring a bright and colorful art style, this exciting series of animated shorts is a great way for parents and mentors to introduce kids to the beloved saga who aren’t quite ready for the live action series.

The first six episodes feature shorts about Luke Skywalker, Darth Vader, Chewbacca, and R2-D2. You can check them out for yourself below. (link for people outside of the USA HERE)

In addition to the shorts above, three additional episodes titled Star Wars: Galaxy of Adventures Fun Facts debuted and provide additional details of the films and stories in a simple and engaging way for kids. The episodes focus on Luke Skywalker, Darth Vader, and the Starfighters of the galaxy. Check them out below.

Making their debut on November 30 th on the newly created Star Wars Kids Website (www.StarWarsKids.com ) and Star Wars Kids YouTube channel , the first 6 exciting shorts will be accompanied by fun mixed media educational pieces designed to help older fans, parents and other mentors welcome the kids in their lives to explore a galaxy far, far away. Additional shorts featuring fan-favorite characters will debut in December and then on a weekly basis starting in 2019.

The adventure continues across a variety of product and platform categories including a new line of Hasbro toys available on December 1 st exclusively at Walmart and then nationwide in January 2019.
Star Wars Galaxy of Adventures begins a year-long celebration which will culminate with the final chapter in the Skywalker saga — Star Wars: Episode IX — in theaters December 2019.

This is only the beginning of these animated shorts with more to come throughout 2019. So what do you think? Will you be introducing your kids to the Star Wars saga with Star Wars: Galaxy of Adventures?