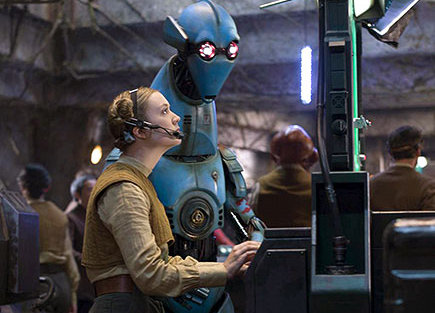 Billie Lourd has had to carry a lot of weight to the Star Wars franchise since Carrie Fisher, her mother, passed away in late 2016 following medical complications. As the daughter of the actress behind Princess Leia, her role as supporting character Lieutenant Connix carries on the legacy of heroines that Leia started, and has seen an increase in prominence in the story of the sequel trilogy. In public events involving the cast and crew associated with the franchise, Lourd has also symbolically stood in for her late mother, and it’s long since been confirmed that she’ll be back in Episode IX. Recently, Lourd revealed some new information about filming for the saga-ending epic as well as her personal thoughts on the upcoming movie.

Entertainment Tonight has managed to score an exclusive interview with the actress ahead of the season finale of FX’s American Horror Story: Apocalypse, which she has a major role in. When talking on the subject of a Galaxy Far, Far Away, Lourd explained that she was enthralled by her experience, while also making mention of how much time she spent working on the set of the J. J. Abrams film:

“I gotta watch myself because the Star Wars PD is going to come get me, but it is incredible. I’ve read the script and I’ve been on set. I was on set for, like, three weeks back in September, and it is going to be magical. I can’t say much more, but I’m so excited about it and so grateful to be a part of it. Star Wars is my heart. I love it.”

Currently, it’s not clear if Lourd’s scenes will only be confined to those three weeks of filming, or if she will be needed for a later part of the shoot (which will go on until some point in February).

While general praise isn’t anything new when it comes to actors promoting a movie that they are starring in, one can’t help but wonder if part of Lourd’s enthusiasm for the project is tied to knowing how the character her mother made so iconic will receive a proper send-off. Abrams and company decided against writing Leia out, and are instead making use of archive footage from deleted scenes in The Force Awakens and The Last Jedi to wrap her story up (likely with a few digitally-assisted visual and auditory tricks thrown in to make her presence flow more effectively with the narrative). Lourd and her uncle Todd Fisher gave Lucasfilm the approval necessary to make use of Carrie Fisher’s unused scenes; in spite of concerns that this move would be “too soon” after her death, the sequel trilogy’s narrative has given Leia a clear character arc, and ending it abruptly seems like it would have been a disservice to Fisher’s legacy. It certainly seems like they have enough footage to work with to last more than a few minutes; perhaps, then, the movie could serve as the “Leia-centric” chapter of the trilogy as originally intended.

Missed Opportunities of the ST - What Could’ve Been
, she would’ve served very little purpose to the story and her death would’ve been pretty meaningless. Sacrificing herself to...
By: Trev
4 minutes 1 seconds ago
Fan Made Character Art
By: Prettyawesomedata
22 minutes 27 seconds ago
General Star Wars - The Rise of Skywalker News and Rumors Thread
By: Prettyawesomedata
27 minutes 52 seconds ago
TROS Viewings
I've gone back and forth a lot with this movie. First thought it was pretty good and then watched it...
By: Sir Puke
34 minutes 32 seconds ago
Who's side are you on: Republic or CIS?
In theory I would stay neutral because I like independent systems. However if you are on your own there is...
By: delph
55 minutes 55 seconds ago
Editorial: Star Wars Canon - Is Landos Fate Set in Stone?
to check out and comment on this topic on our main site
By: SWNN Probe
1 hours 6 minutes 27 seconds ago
STAR WARS Ranking Based on Competitive Picking
Woah. I am not alone. People will not prefer TROS that much if we lead them. What leads to the...
By: oldbert
2 hours 4 minutes 30 seconds ago
STAR WARS Ranking Based on Competitive Picking
Pretty accurate!
By: Use the Falchion
2 hours 50 minutes 38 seconds ago
Missed Opportunities of the ST - What Could’ve Been
I think it's pretty clear from what people "expected" from the ST, people have misunderstood Star Wars for a very...
By: RoyleRancor
2 hours 56 minutes 12 seconds ago
The Original Star Wars Trilogy Strikes Back In New Acme Archives Posters
:eek: i love them all
By: Lenerith
3 hours 9 minutes 36 seconds ago